20101205.gpx Open full screen  NB: Walkhighlands is not responsible for the accuracy of gpx files in users posts

I have fond memories of Morrone as it is where I fell for winter walking and so marks the beginning of my bagging career. Report of my Jan 09 effort over here.

So with access to the hills a bit of a problem round here and a Considerable avalanche warning on all aspects above 700m Morrone made an excellent chance to escape DIY’ing & Xmas shopping.

Didn’t made an early start as we had had a rain shower the previous evening and with dire warnings of ice I wasn’t on my way till 10:45. But the weather & drive up had been superb (if slow). Temperature in Braemar was a relative barmy (by recent standards) -4C.

Once on the lower slopes the going was fairly slow through the powder snow but the snow never got above calf depth and was frequently less. By around 700m the snow conditions improved markedly. It often took my weight and when you did break through it never got beyond ankle deep.

Summited at 1pm and spent a good half hour having my lunch and taking lots of snaps. Had initially thought the snow would be worse so had thought I would just to come straight down again, but decided I go on to the top of Carn na Drochaide. 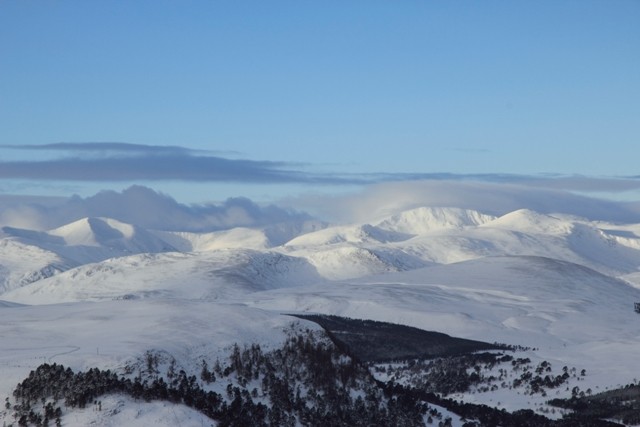 The Cairngorms from near the summit 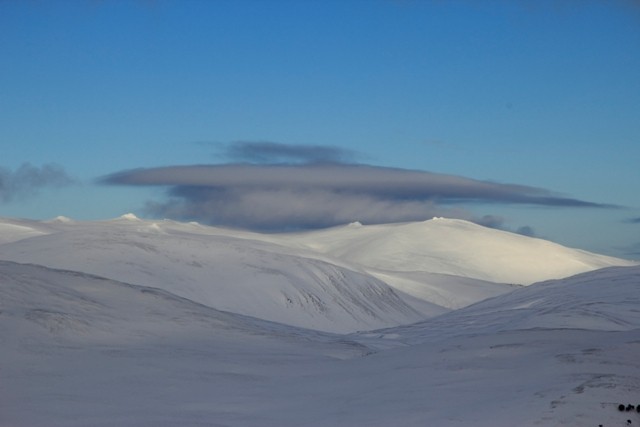 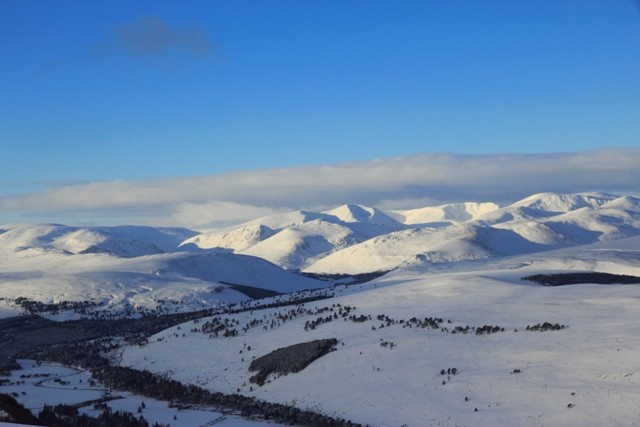 Linn of Dee & Some Mountains

Rime encrusted transmitter on the top of Morrone. I find it fascinating that when you point your camera up on winter days like today's the sky turns to black. This is pretty much straight out of the camera: no filters, no post-production bar sharpening. No sure of the science - must be something to do with the levels of ultra-violet - perhaps someone can enlighten me.


Was joined by a couple of other walkers as I was about to set off and then meet a cross-country skier soon after. He had been up a few days ago and said it had been powder snow then, while today’s conditions were just about ideal. Zoom of the above (note lenticular clouds!)

The snow conditions gradually got slightly worse as I progressed. It wouldn’t take my weight with penetration varying randomly between a couple of inches to calf depth – in other words annoying. I was also torn between staying out to get a some good sunset photos and being out on the hill in the dark in winter. Even though conditions were good (only a gentle breeze & no sign of impending blizzards) it was still at least -6C, it would only get colder and I was on my own. So my anxiety rather took the shine off the latter part of the walk as I hurried on. In the end the sunset wasn’t amazing and I probably missed the best of it as I turned my back on it to make my way home. The sun sets on Morrone I snatched a few more snaps on the way back and got back to the road without need for my head torch so probably got the timing about right. When I did get to the road was mightily miffed to find that there hadn’t been any vehicular traffic on it at all, so was still walking in a foot of snow. As it turned out I only had about a k of this to put up with before traffic & then clearing made life easier.

Wasn't back to the car till after 5pm. Only needed the head torch for 15 minutes or so as the lane had street lighting. A fairly strenuous day as haven't had much in the way of exercise recently but well worth it. Not too sure about staying out so late in winter. I'd be happier starting off in the dark knowing you have the whole day ahead of me. Or maybe I should learn to relax a little

Lovely report Alastair and the photos are brilliant - especially liked the midday sun and the colours in the sunset shots.

Very nice report and pics Alastair, this is one of my 2 corbetts, nice viewpoint in all directions - looks even better covered in the white stuff.

Wow, this has really whetted my appetite for Braemar now, including 'staying out after dark'. The pictures are smashing, showing how beautiful the area is.

Wonderful shots, Al. The aerial actually likes quite pretty with all the ice.

I've now added a link to the flickr set, which includes this panorama:

which is best viewed via this link

I think both aerial pics are superb! I especially love the rimed one

Haven't done Morrone yet - think I want to combine it with all the hills to the South of it though and come down somewhere around the Corienalarig ruin so it will be summer sometime...

Smashing report with fab pics to complement. Hope to do this Corbett at the weekend, fingers are crossed as i type

Mind you, Sgor Mor is supposed to be even better, and I've not been up there yet

. You done that one, or do you still have it to look forward to?

malky_c wrote:You done that one, or do you still have it to look forward to?

No, still got that to look forward to... probably early in the New Year - or even earlier if the snow prevents me from cycling up to Derry Lodge to tackle some of the bigger hills round there.

Only just looked at this post. Awesome pictures and congratulations on winning walk report of the month

Very nice photos and congratulations on winning the prize of the month!

Regarding your question about the sky. It goes back to ye olde question; "Why is the sky blue"? The reason is that light scatters in the atmosphere due to the particles in the air/atmosphere. On a sunny day, you see a pale blue colour near the horizon and a much darker shade of blue overhead. This is because light travels through more air at larger angles (near the horizon) than from overhead, and thus scatters more. As you Increase in altitude, say from the top of a mountain or looking out of an aeroplane window, the sky overhead becomes more darker because there is less "air", and thus less particles for the light to scatter off. A similar phenomenon is responsible for the why the sun is redder at sunset and sunrise as well.