Three in the bag and a gold star for new boy Coinneach!

Three in the bag and a gold star for new boy Coinneach!


Started off our New Year walking with a bang bagging Coinneach his first three Munro's! With little snow on the hills and the forecast for a day of sunshine we jumped at the chance for heading to some bigger hills. As we are starting off at 0 again this year all the Munro's I've already done are back on the tick list for my new boy and The Cairnwell Munros are a group I have already done twice. They were ideal for a beginner dog and for a walk in winter as it isn't far from home and isn't a particularly long day. Coinneach - dog on a mission

We parked up and headed off, Moss soon free to be off-lead while Coinneach had the job of pulling me up the track. Despite the temperature in the car saying it was -5°C I started feeling too hot to stopped to take off my hat and scarf. Amusing considering an article I read yesterday in a magazine for a very well-known pet shop that said dogs shouldn't be outdoors at such temperatures. The cold was certainly no bother for Moss who rolled in as many snow-dusted patches she could find and Coinneach was taking it all in his stride (though I had packed a dog coat just in case he did start to feel the cold as I wasn't sure how he would be with low temperatures). We took a short cut towards Carn Aosda underneath the ski lift and in no time at all we were on the first of our three summits today. Easy tick. A nice couple appeared behind us and very kindly took a photo of us at the summit so as a bonus we got a photo of us all too! From there it was a case of carefully retracing our steps - very carefully. With Coinneach stuck on the lead it is a bit more difficult descending on a loose surface but he started to get the idea and we were soon back on the track and heading towards our second target and the furthest away of the Munro's on the walk, Carn a' Gheoidh. 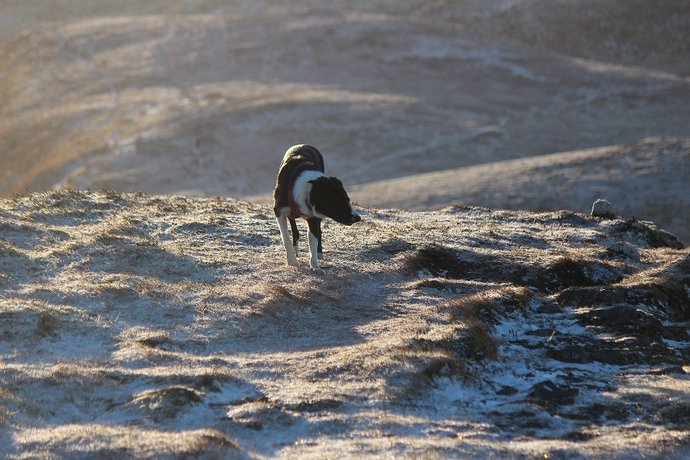 Downside to walking at this time of the year, the sun was in my face for pretty much the whole way so for a lot of this long stretch I was blinded finding shaded parts of the track as often as I could but in the shade we came across ice - it was a no-win situation! It also turns out Coinneach, unlike his big sister Moss, is TERRIBLE when it comes to walking on ice. Yet he kept trying to walk on ice and I was having to guide him away towards easier spots to cross the few patches of ice we came across. Not sure whether it is because he has such little paws or if it is because his claws are very short so can't provide him with any grip, or maybe a combination of both. Icy stretches are something to avoid with him. We reached the base of Carn a' Gheoidh and started to ascend when I spotted a people with dogs just coming down. I wasn't concerned, I moved to the left so we would be further away from them and we started heading up. Next thing these dogs were tearing down towards us. I shouted that Coinneach isn't dog friendly and I got the response every owner of a reactive (or other dog that needs space) dreads. There was no recalling the dogs, the woman was just shouting "it's okay,it's okay.", no attempt to call the dogs back. Really? Would it really be okay if my on-lead dog went for them? A bite up there far away from the nearest vet could be a very bad situation. Regardless, I'm trying to teach him not to react to other dogs and dogs with no recall charging over is not helpful. As it was this is how Coinneach earned his gold star. He didn't react to them. No lunging, no barking. His body language was very much a silent 'back off' standing very stiff and still with his tail and head high. The dogs wisely decided against hanging around. At least they had some sense! 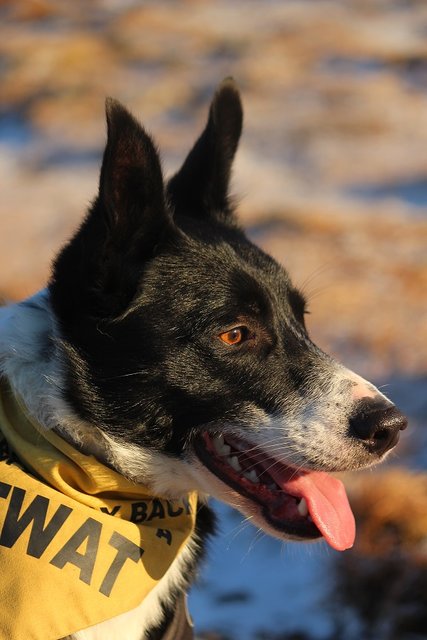 Aside from this it was an uneventful walk to the second summit of the day where we stopped for the dogs to enjoy a nice tripe bone - yummy, if you're a dog... 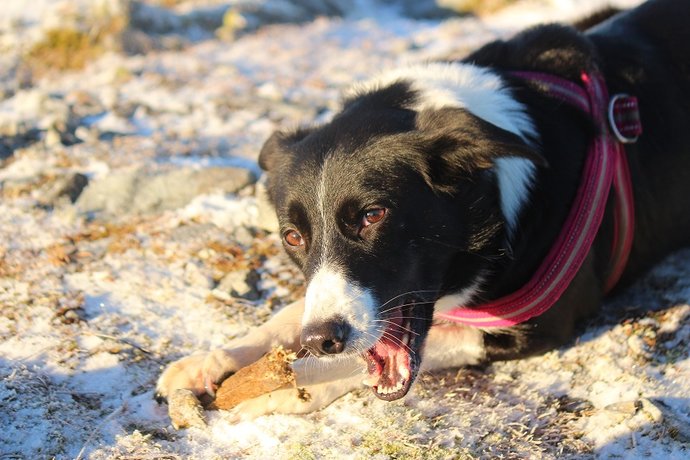 The couple that took our picture at Carn Aosda caught up with us (which was strange as I thought they had gone ahead of us!) and we got another summit photo. The sun now behind us the descent was much easier Coinneach becoming a lot better going downhill on the lead and the third target for the day clearly visible ahead. Quite possibly my least favourite Munro, The Cairnwell. We followed a path (there are lots of little paths and tracks up here) and I confirmed a suspicion I had earlier - Coinneach has a very strong tendency to try and lead to the right. Not a problem up there in good visibility but something I will have to be careful with walking through mist when visual cues are absent to make sure he doesn't lead me off-route. There is a fork in the path one path leading back to where we left the main track and the other cutting a corner towards The Cairnwell. We took the path towards The Cairnwell following it across a slope. There was one awkward bit where we had to find a path around a pile of boulders but otherwise it was easy enough to follow towards the third and final Munro of the day. Rejoining the track we headed up the loose rock passing the silent ski-lift and climbing up towards the summit with its transmitter masts. There is a tiny shelter up here, I'm sure last time I was there it had a door...I hooked Coinneach's lead over a metal bar and the dogs got a summit photo of just themselves. It's not the most attractive of summits. Then it was time for the descent and this bit I'm always wary of because it was on the loose ground here that Millie my original hill-dog who passed away in May slipped, and she was always very sure-footed! We made it down without mishap, the sun getting lower in the sky. 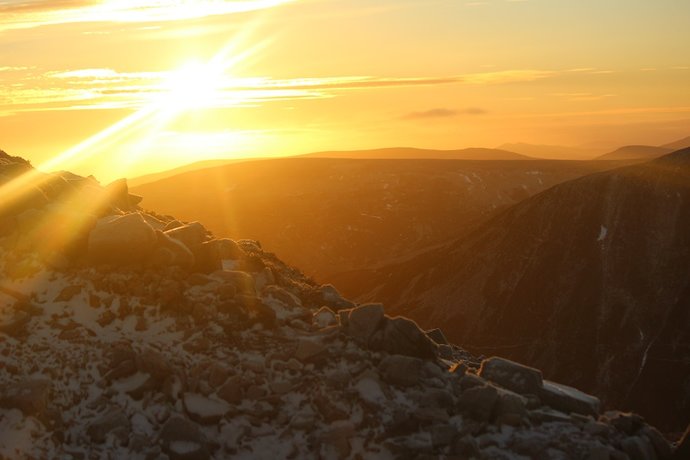 After Millie's mishap we took a short-cut to the car using one of the ski-runs. We did the same when we repeated the round with Moss. And now we did it again with Coinneach. We go down the run just beyond the second ski lift that heads down towards the green building. The last two times it was boggy, but fun. This time it was a bit more snow-dusted and icy, but still fun. Did some bum-sliding down and think I could do with a little sledge because Coinneach seemed to enjoy helping to pull me along! There were some distractions for him though. There were a few hare in their white coats running around. We had seen a few earlier, but these ones on the descent seemed to distract him the most. We reached the bottom and rejoined the track. The snow-blowers were out making snow for the lower ski slopes so perhaps they'll soon have the ski season started. Skiing isn't for me though! We followed the road back down to the car park returning to the car. Wish I'd taken some cash as it would have been nice to get a hot drink from the cafe! As it was I didn't so it was home we headed where Coinneach celebrated his achievement with a bottle of Bottom Sniffer Dog Beer Re: Three in the bag and a gold star for new boy Coinneach!

The dogs looked in their element.

Re: Three in the bag and a gold star for new boy Coinneach!

Moss certainly is at home on the hills! It is a very new environment for Coinneach but I think he enjoyed himself even if he was on the lead the whole time. Did a bit of bum-sliding down the ski run and I think he liked getting to pull me along