The Johnston Tower and sub-zero Strathfinella

The Johnston Tower and sub-zero Strathfinella


Some time ago Jaywizz and I had set ourselves a goal of climbing all the mainland Marilyns south of the Highland Boundary Fault. The forecast was very good so we decided to tackle the two that are the furthest north - between Montrose and Stonehaven - accompanied by friend Peter.

There is a good parking area on the B9120 about 1.5 miles east of Laurencekirk. I was surprised to find several wooden memorial benches with wreaths and flowers there and also surprised that the gate on the way to the summit was padlocked with electric fencing to either side. 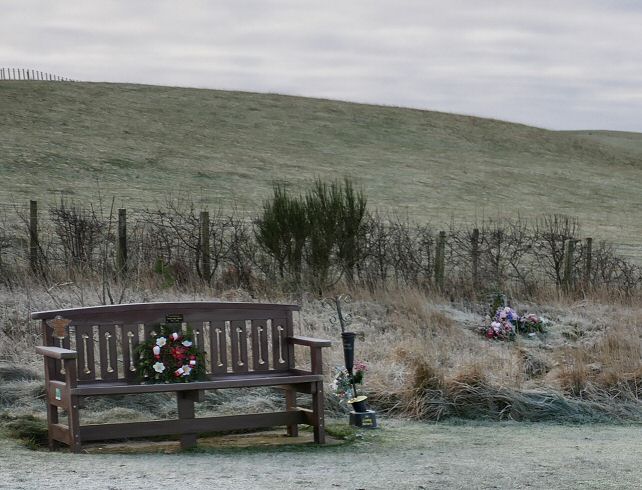 The memorial 'garden' by the parking for Hill of Garvock

While other WH reports had mentioned cattle, we didn't anticipate meeting any on a winter's day, and so it proved. We climbed that first gate - good practice for three others we met on the way to the top. The final and fifth gate, however, could be opened. The summit is capped by a large 45m diameter cairn formed of round cobbles capped by the Tower of Johnston. 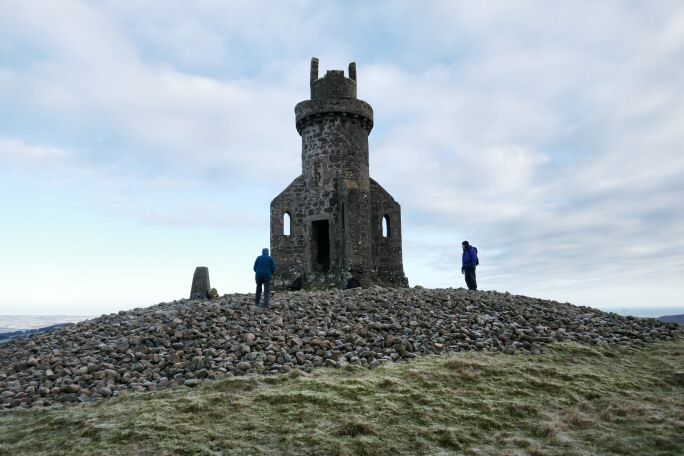 Tower of Johnston and trig point on top of ancient cairn

This is 9m high and is a folly built in 1812 by James Farquhar MP to commemorate the Duke of Wellington's victory over Napoleon in the Peninsular War (Wikipedia). It cost £42 and is reported to have used surplus material from his earlier construction of the nearby Johnston Lodge 3/4 mile to the NW. There is a decrepit wooden door lying open to a spiral staircase. The slit window has been blocked so a torch is handy for the ascent. Near the top three steps have been broken, probably by masonry falling from the now incomplete crenellated top. Only stumps have been left protruding from the wall. 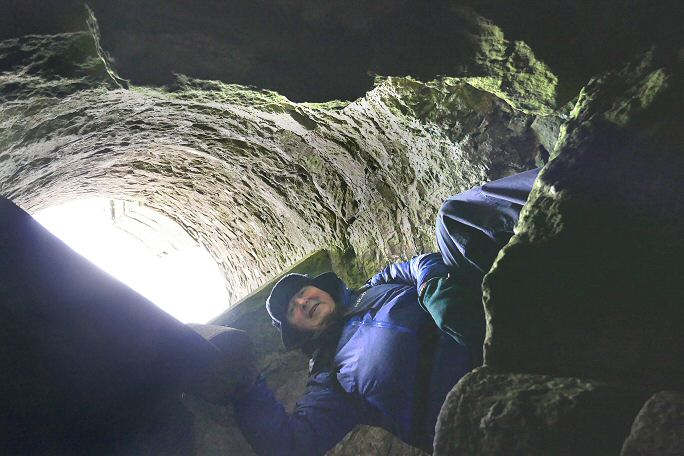 Peter on the last intact steps before the gap 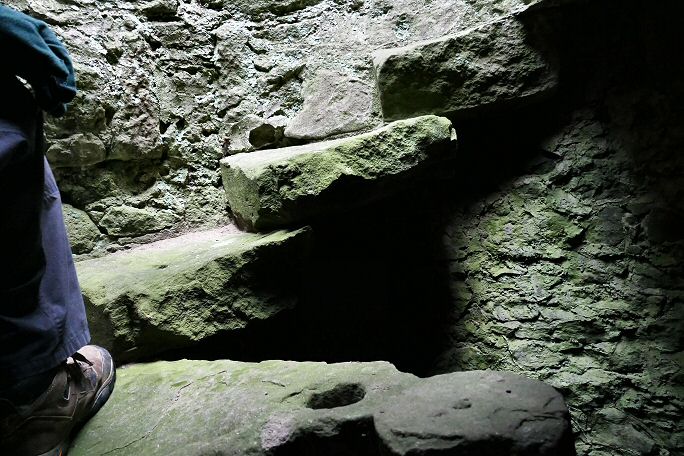 The view looking down from the platform at the top

They can be used with care to pass the gap and gain the top which makes a fine viewpoint. 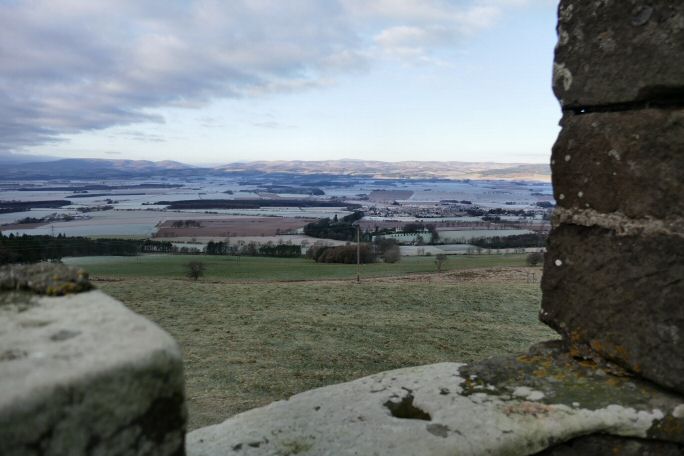 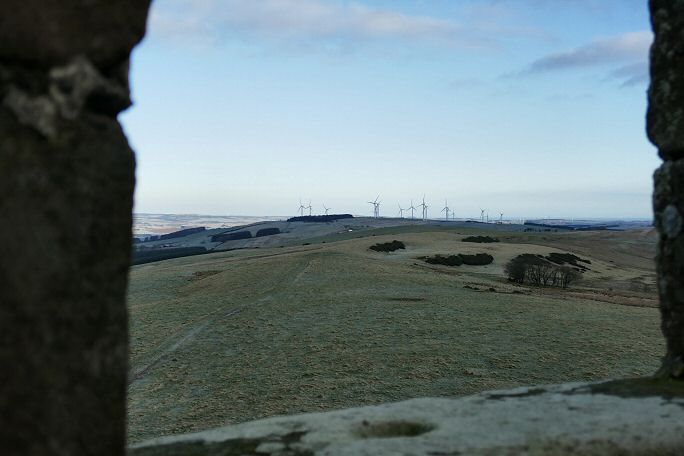 The forecast had promised sunshine at Laurencekirk and it was surprisingly accurate. Garvock remained under cloud while the sun shone only a short distance away to the NW. 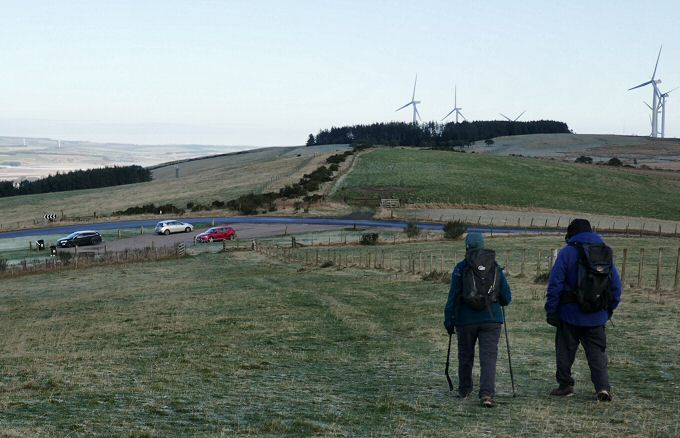 Returning to the car park

A combination of Bing's aerial views and Google's Streetview found a better parking place than Rodmeister's where a track led into the forest. There was room to park where it split into two. 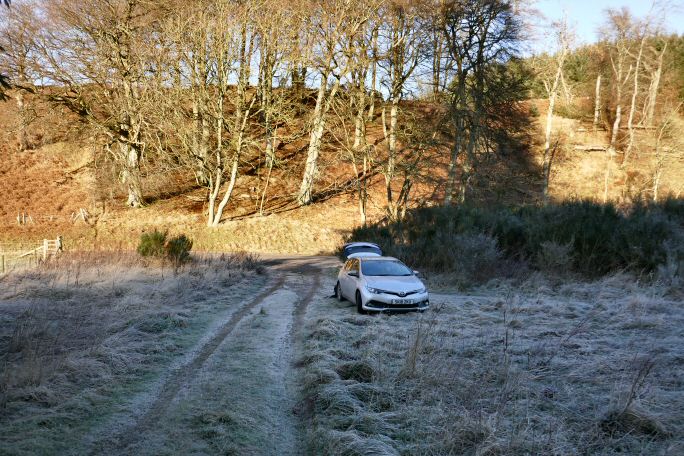 Parking photographed from our ascent route, We used the 'ladder' fence on far left for our return

We walked up the track until it swung to the left. There we crossed the fence then the stream and climbed the bank to find a path leading uphill. 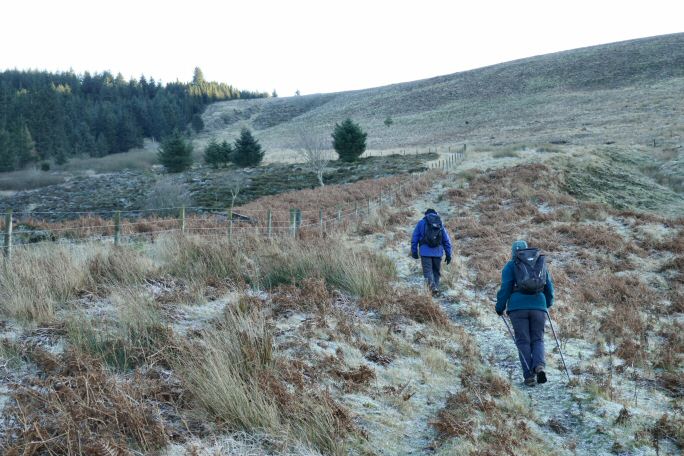 The path up the west bank of the stream

This led easily up avoiding the tussocks until, remembering Rodmeister's report, we headed southwest to find the forest break that led down to a track. We were briefly in the sun as we reached the top of the ridge then back into shadow when we entered the forest. 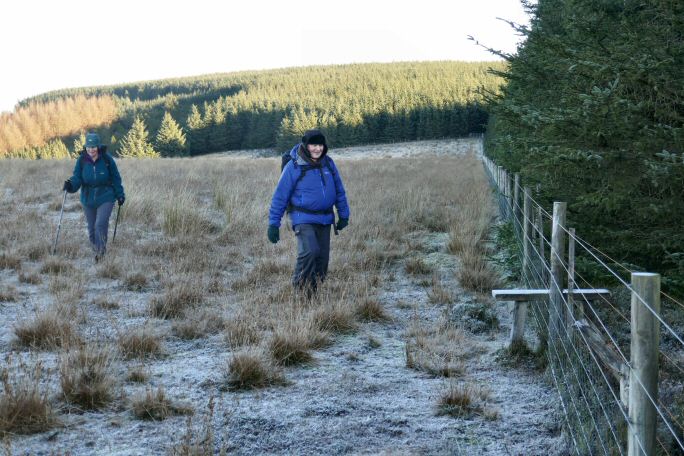 The stile to the forest break

About 1km after entering the trees we reached the five way junction where a left turn took us along a churned-up muddy track. Obviously a popular route for walkers, cyclists and horses it was mostly frozen. After 70m we turned left at a small cairn to see the trig point 15m ahead in the trees. 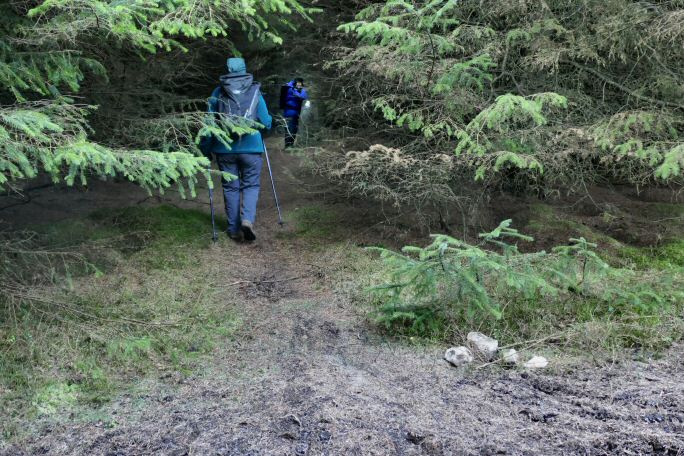 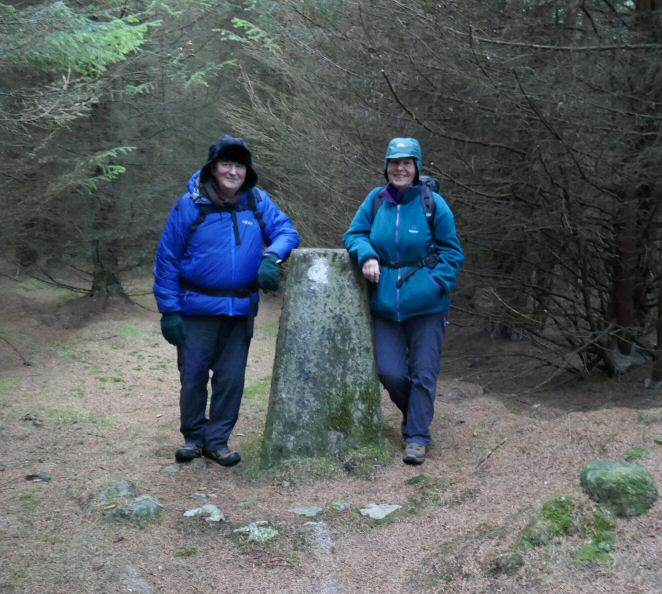 After a stop for coffee and photographs we retraced our steps until we came to a pile of small pebbles at the side of the track. 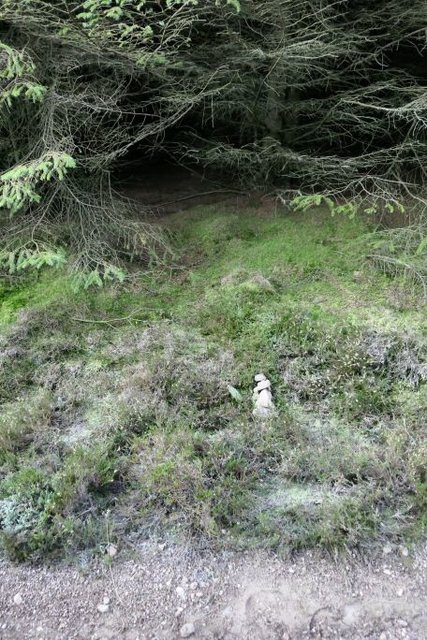 Marker for the short-cut through the trees

This marked the shortest route through the conifers back to the open field. A short debate ensued and we decided to take it. It was easy going. The trees lacked most of their lower branches so we could walk through with a bit of zigzagging and only a few branches needing to be swept aside. We exited near a boundary stone and gate. 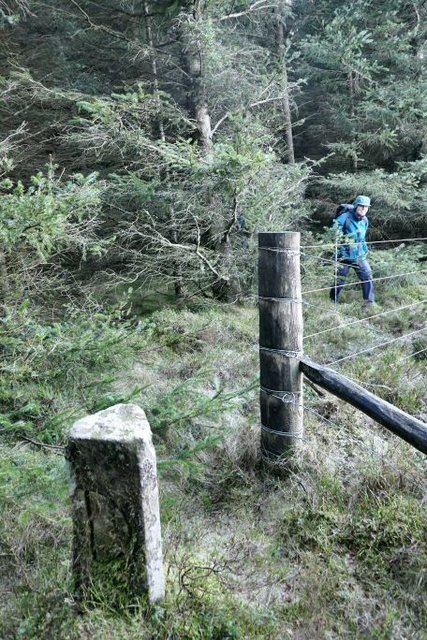 Jaywizz emerges from the forest near a boundary stone 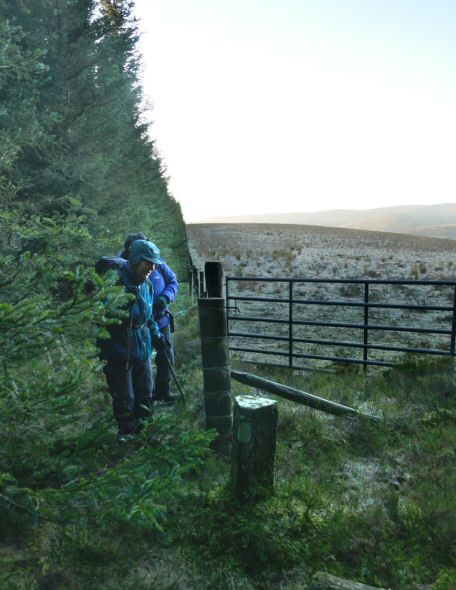 No need to climb this one - it opens!

On our way down we kept following the path we'd used on the way up to find a bridge crossing the stream then a gate into the field west of where I'd left the car. 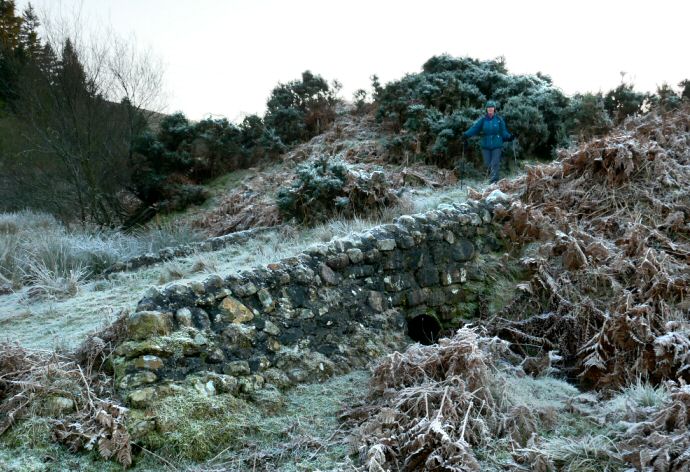 The bridge over the stream

We didn't need to cross the wire fence to reach it because there was a section of wooden fencing at the roadside we could scale instead. So If you want to walk that hill I would recommend our parking spot, but leave it to you whether to select the short cut through the forest.
It had been a fine day with continuous sunshine inland, though by choosing the north side of Strathfinella Hill to climb we'd been in the shade almost all the time. The temperature in Strath Finella remained sub-zero with frozen ground, an ice-covered Loch Saugh, and hoar frost coating the vegetation, but almost no breeze. It had been a very fine day out.