Wainwrights included on this walk: Wetherlam

Hewitts included on this walk: Wetherlam


Happy New Year everybody, I hope you all have a safe and fruitful 2019 in the hills

We really needed to get out and have some fresh air, Christmas and the New Year are great but they do encourage a wee bit of lethargy, what, with not going to work for nearly two weeks and overloading on food and the usual delights of the festive season, we tend to put a bit of timber on the old bones, well, I do anyway, so we wanted a steady day to start the year with.

Wetherlam was one Denise needed to tick off so we decided to do a short excursion from Tilberthwaite just to get our bodies used to the hills again, it's been over 5 weeks since we were out, too long, this is how we got on

The drive up from home is easy enough it took less than an hour and a half from house to Tilberthwaite, the car park had very few cars in it when we arrived so there was no problem getting a spot. We got ourselves ready and set off up the steps at the rear of the car park.

This initial bit is a staircase, steep but easy and it takes you alongside the old quarries above Yewdale Beck, it's quiet with a feeling of remoteness today but this area of the Lakes must have been a hive of activity in the past, there's plenty to look at. 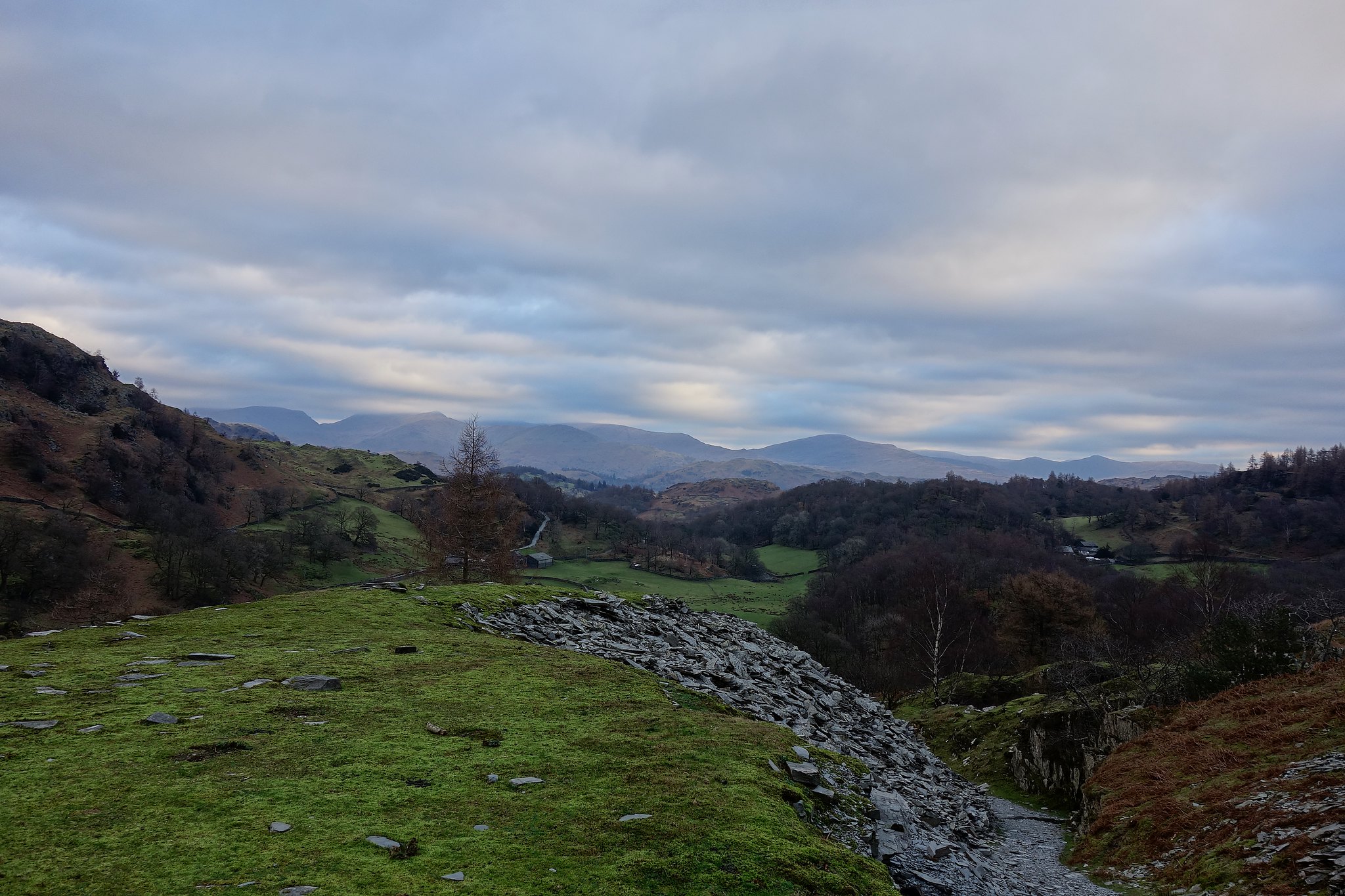 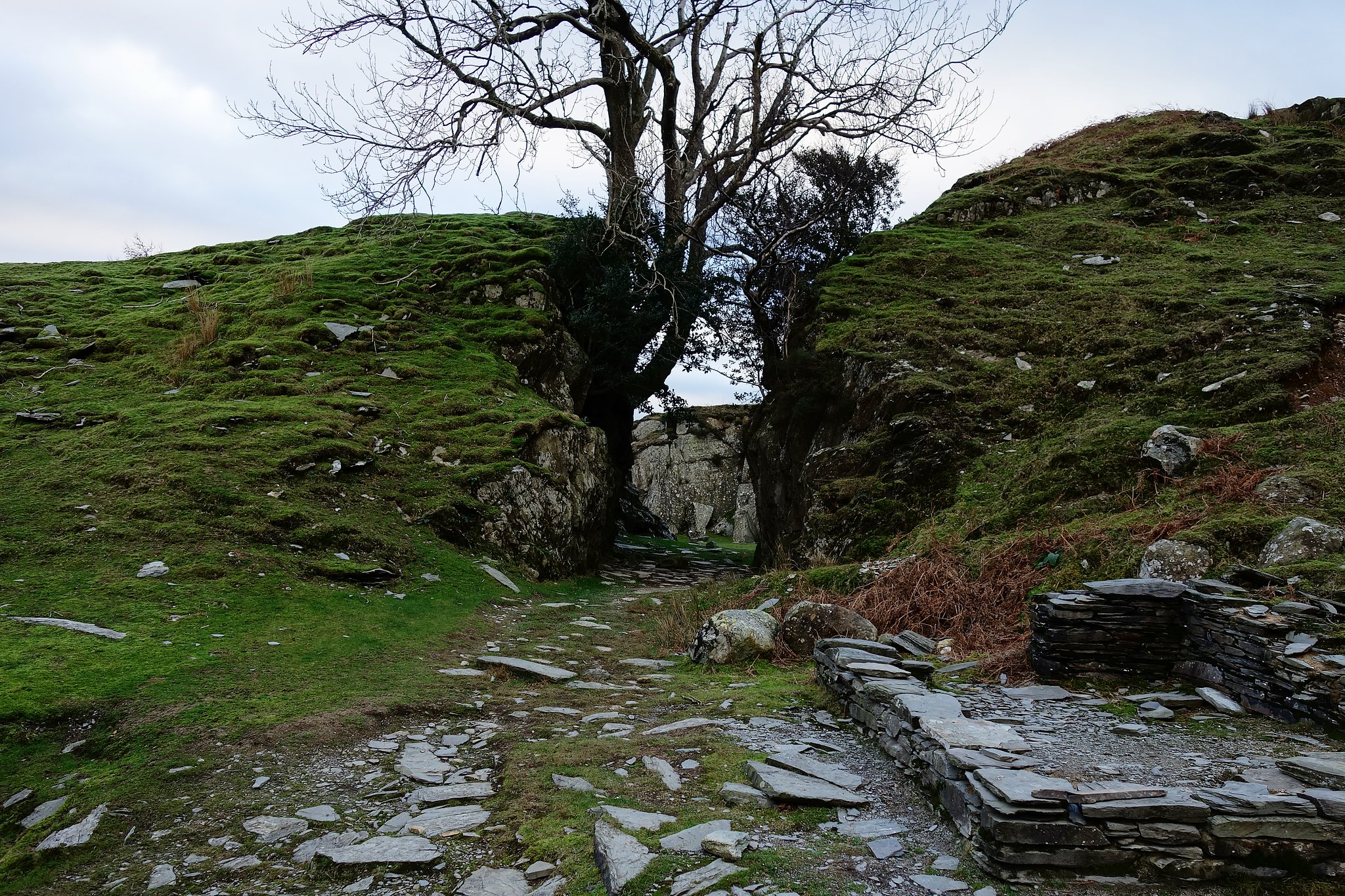 Our path splits off to the right and drops down to a footbridge over Yewdale Beck.

View up Tilberthwaite Gill from the split in the path 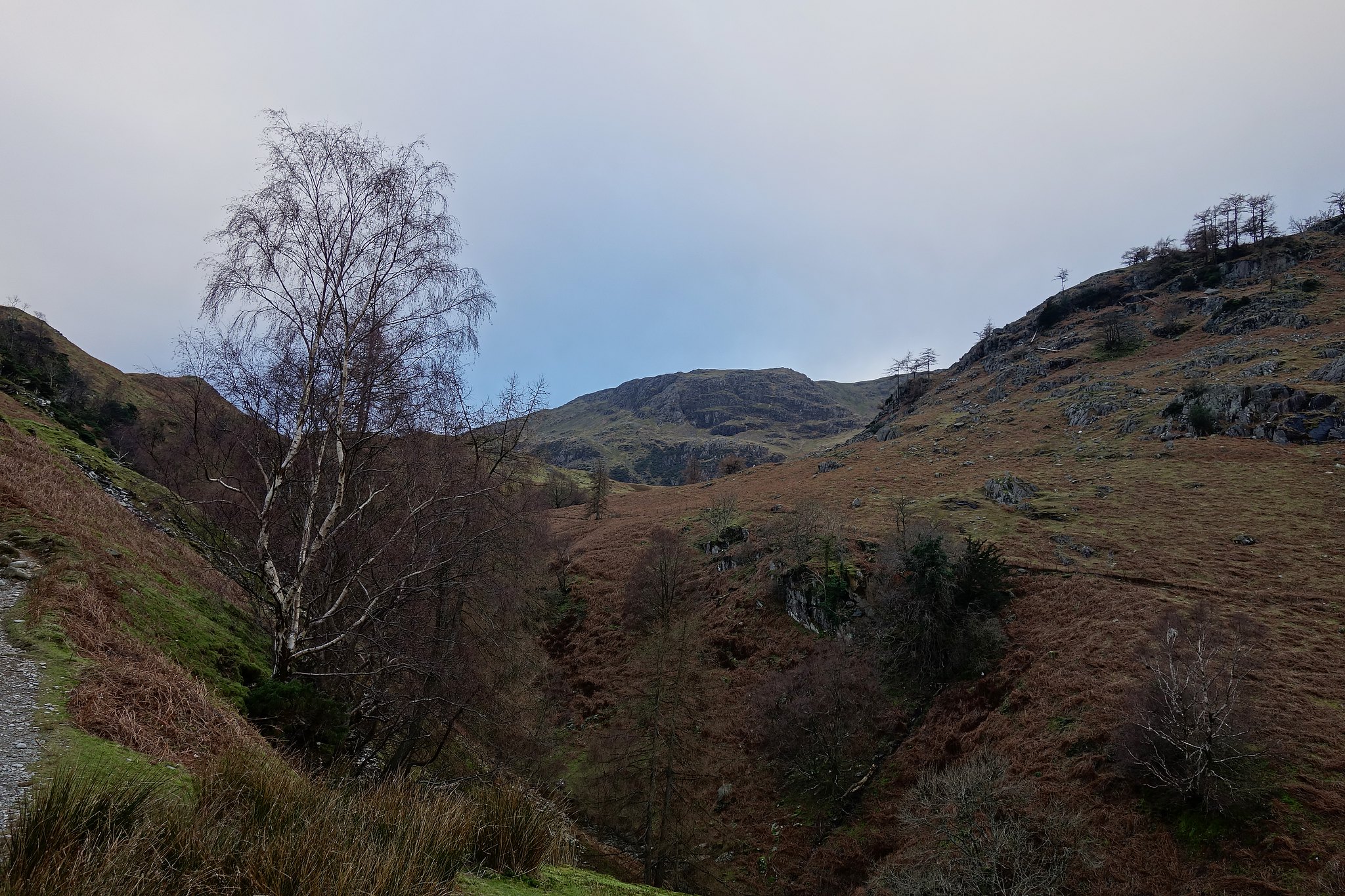 up the Gill from the bridge 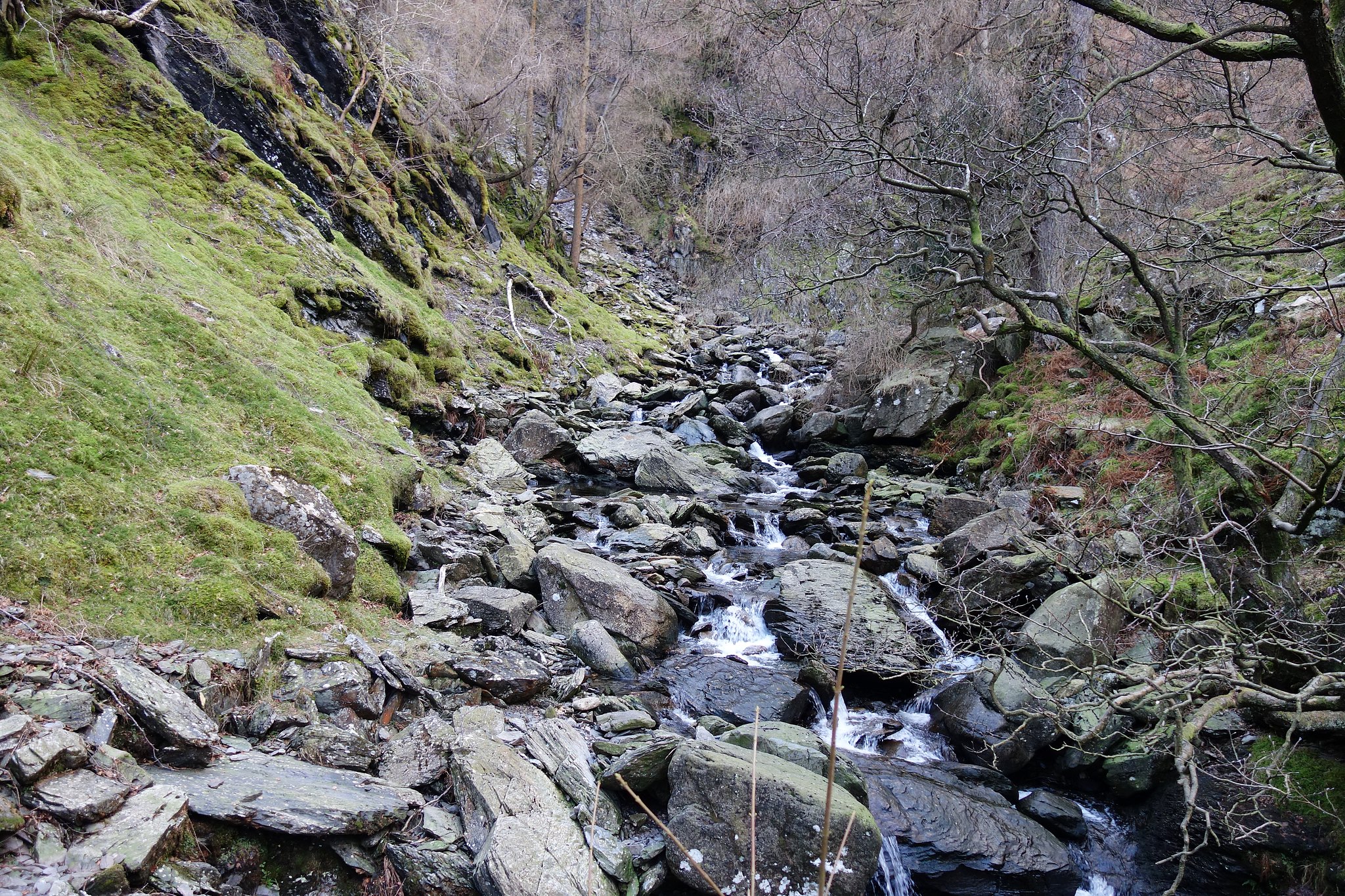 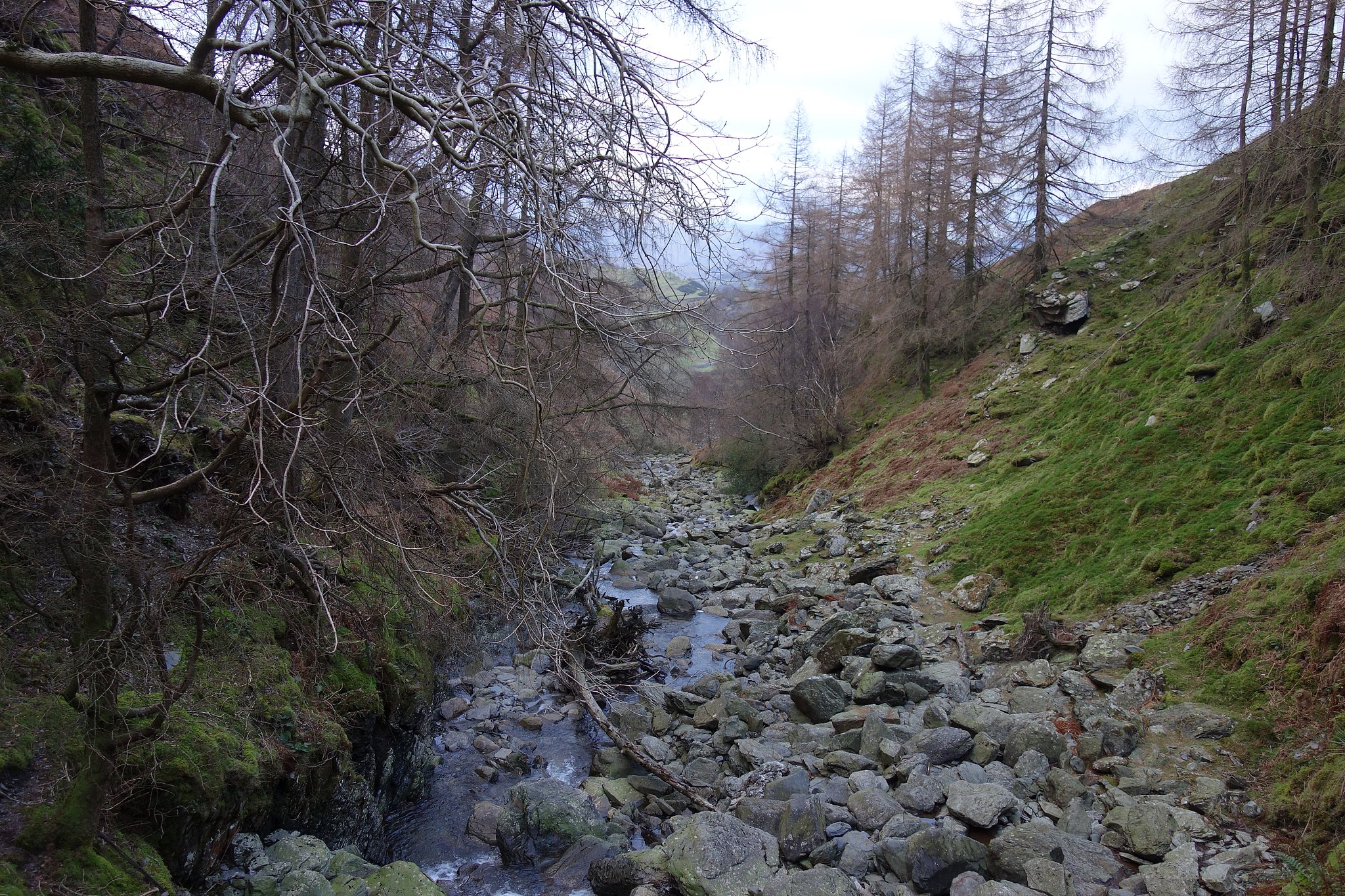 On the other side there's a steep pull up to the track that runs around the base of Blake Rigg, once on this track it's a nice steady walk into the big cove under the Wetherlam edges,

View back from the Blake Rigg track. 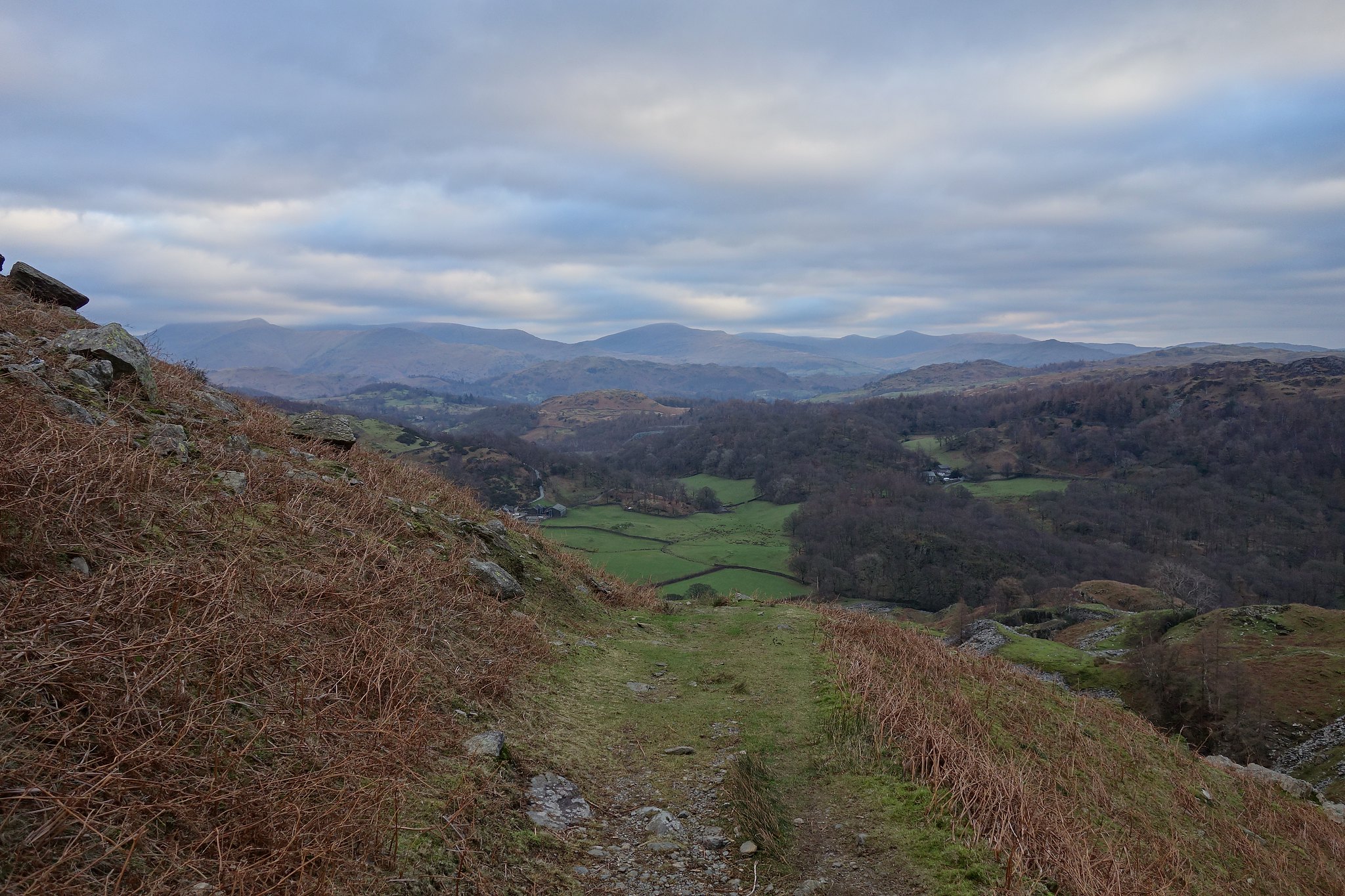 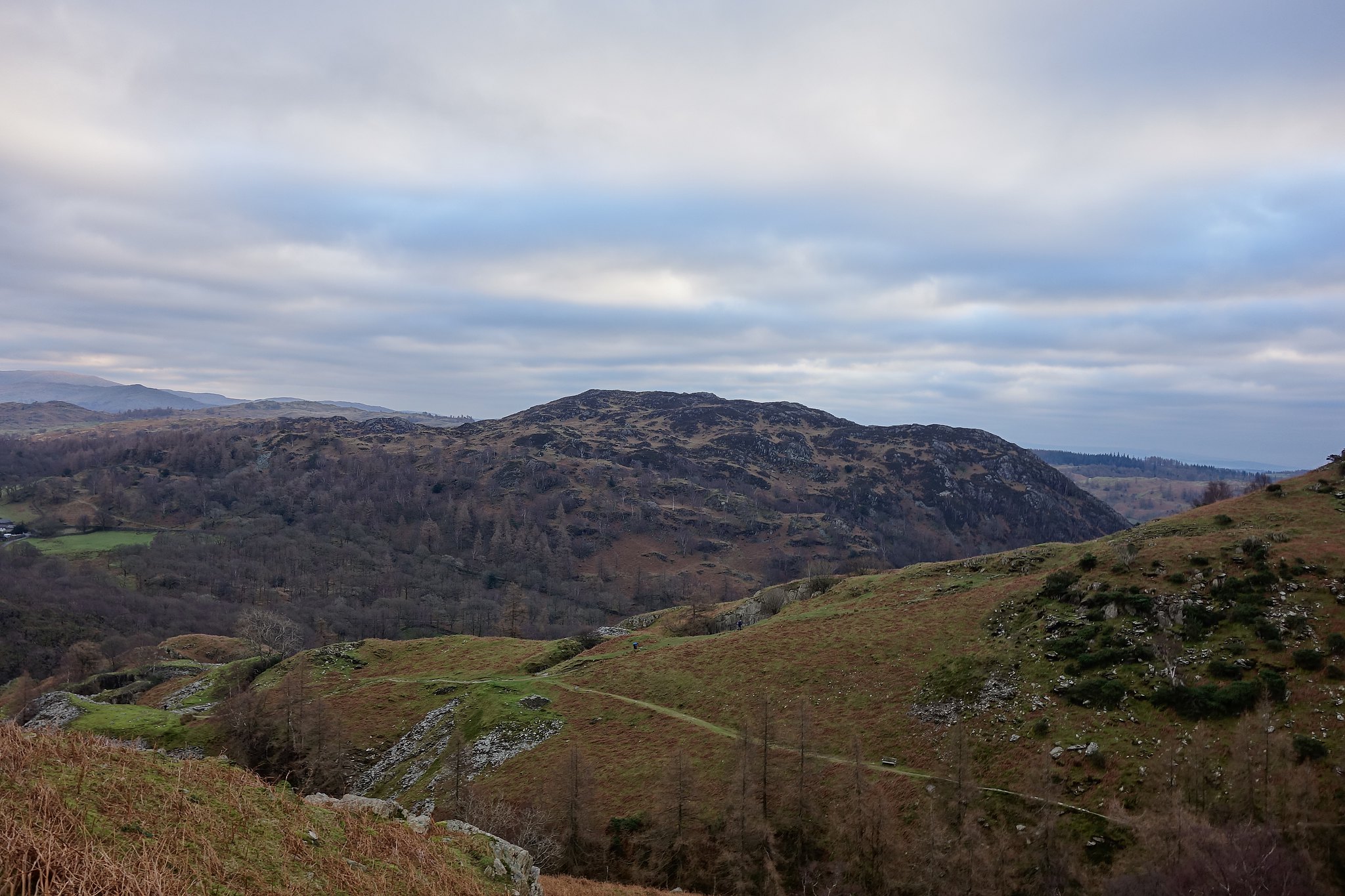 Wetherlam Edge dominating the view ahead 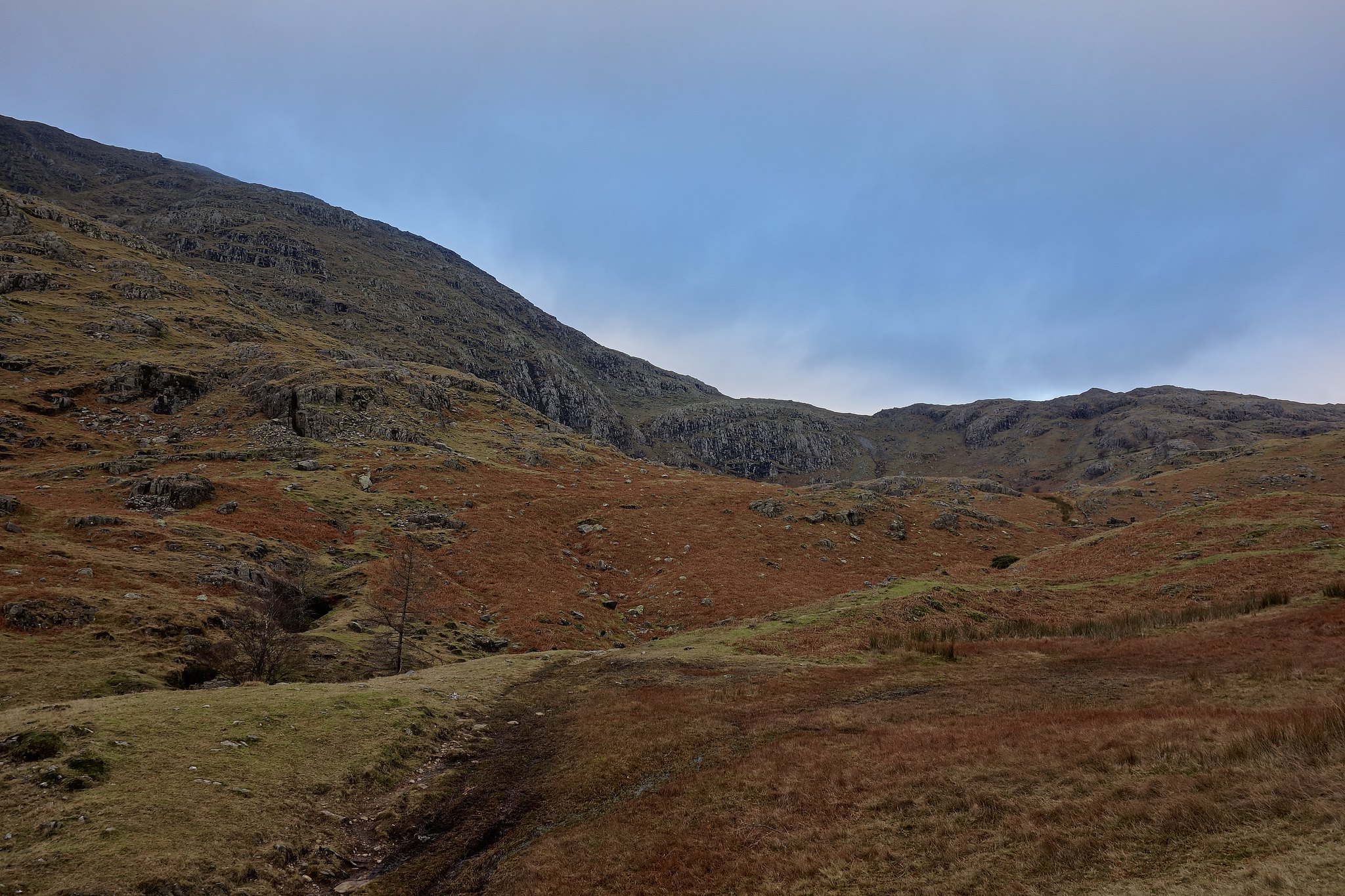 and Steel Edge off to the left looking inviting, we'll have a go at that one day. 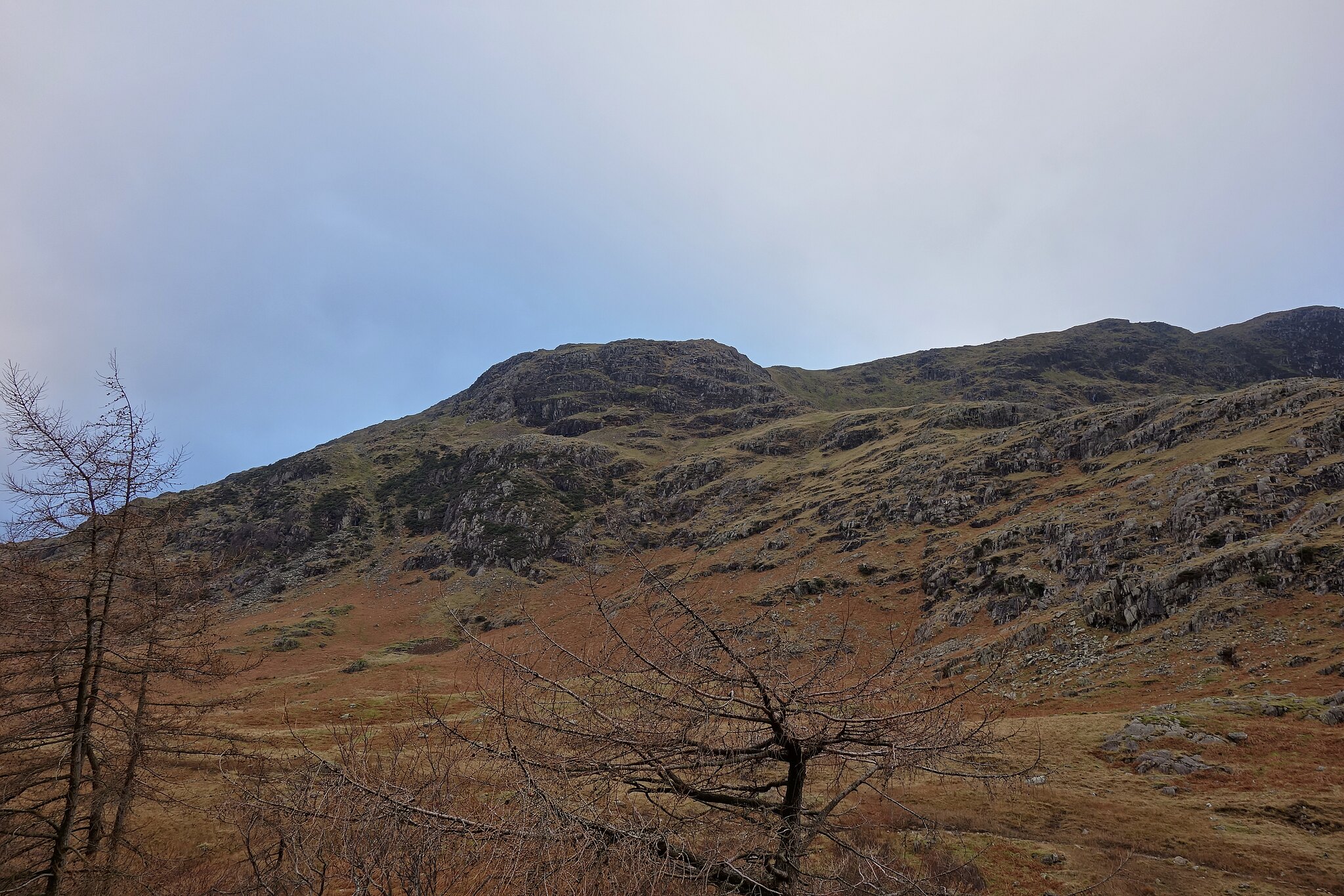 There's another little steep bit to climb on the way to Birk Fell Hawse, once up this Wetherlam Edge reveals itself as a fairly broad and craggy climb, in the dull light it looked quite interesting.

We started our ascent following the path as it winds its way up, there are one or two hands on rock sections which were no problem, the only thing to be aware of was some of it was a bit slippery so care was needed to make sure we didn't end up banging our knees. About two thirds of the way up it starts to level off and the path weaves its way around boulders before reaching the rocky summit of Wetherlam. 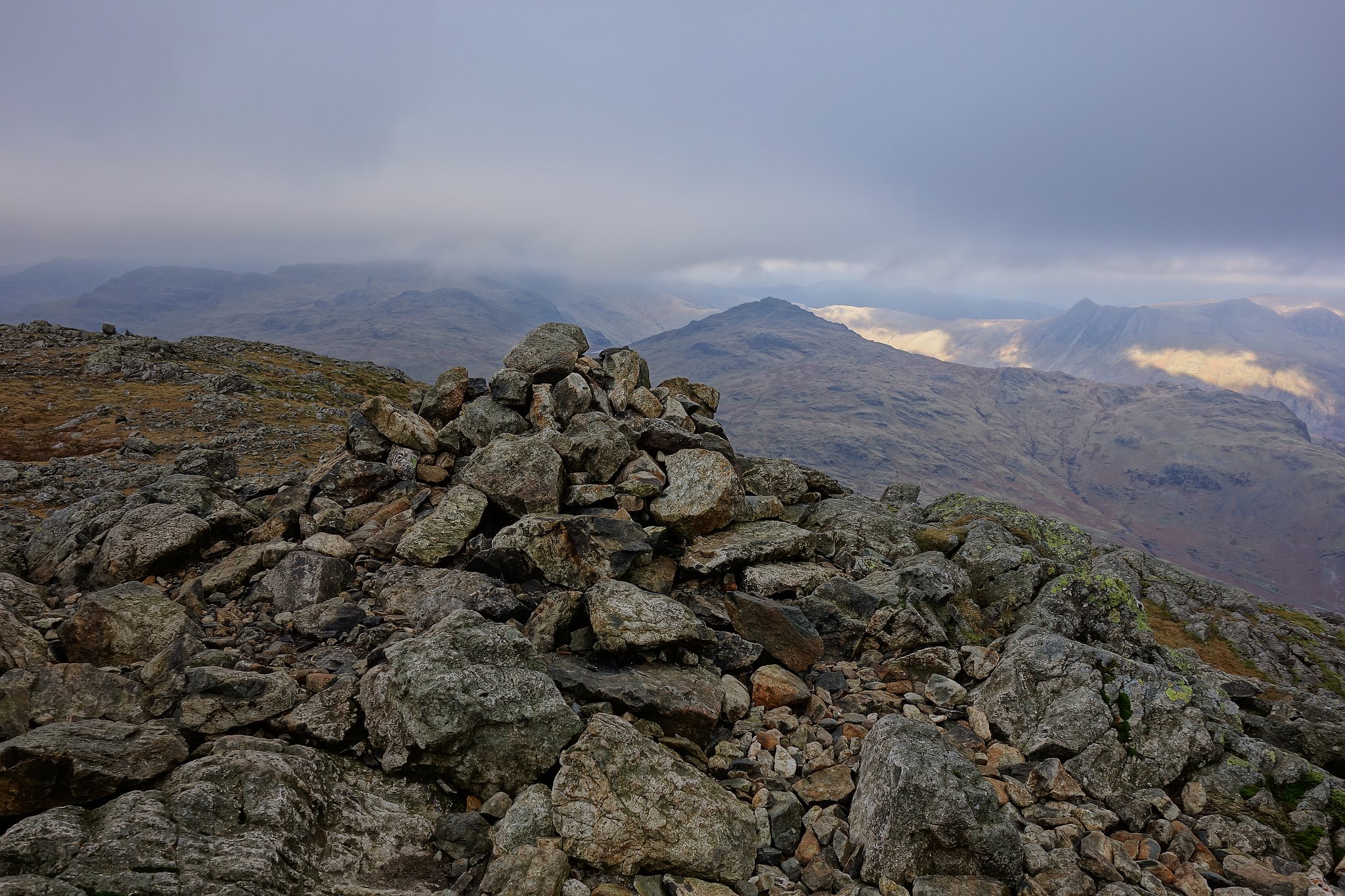 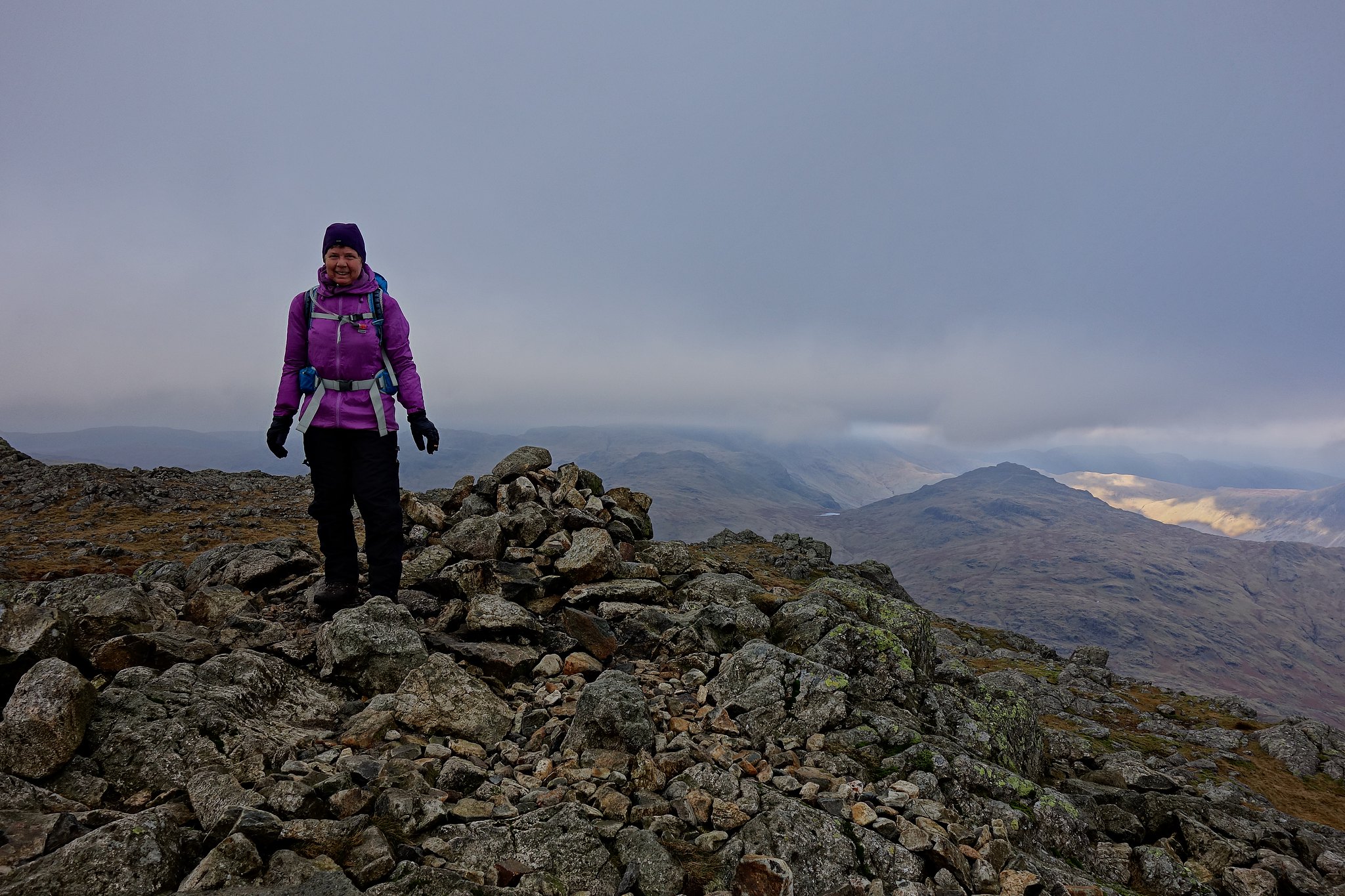 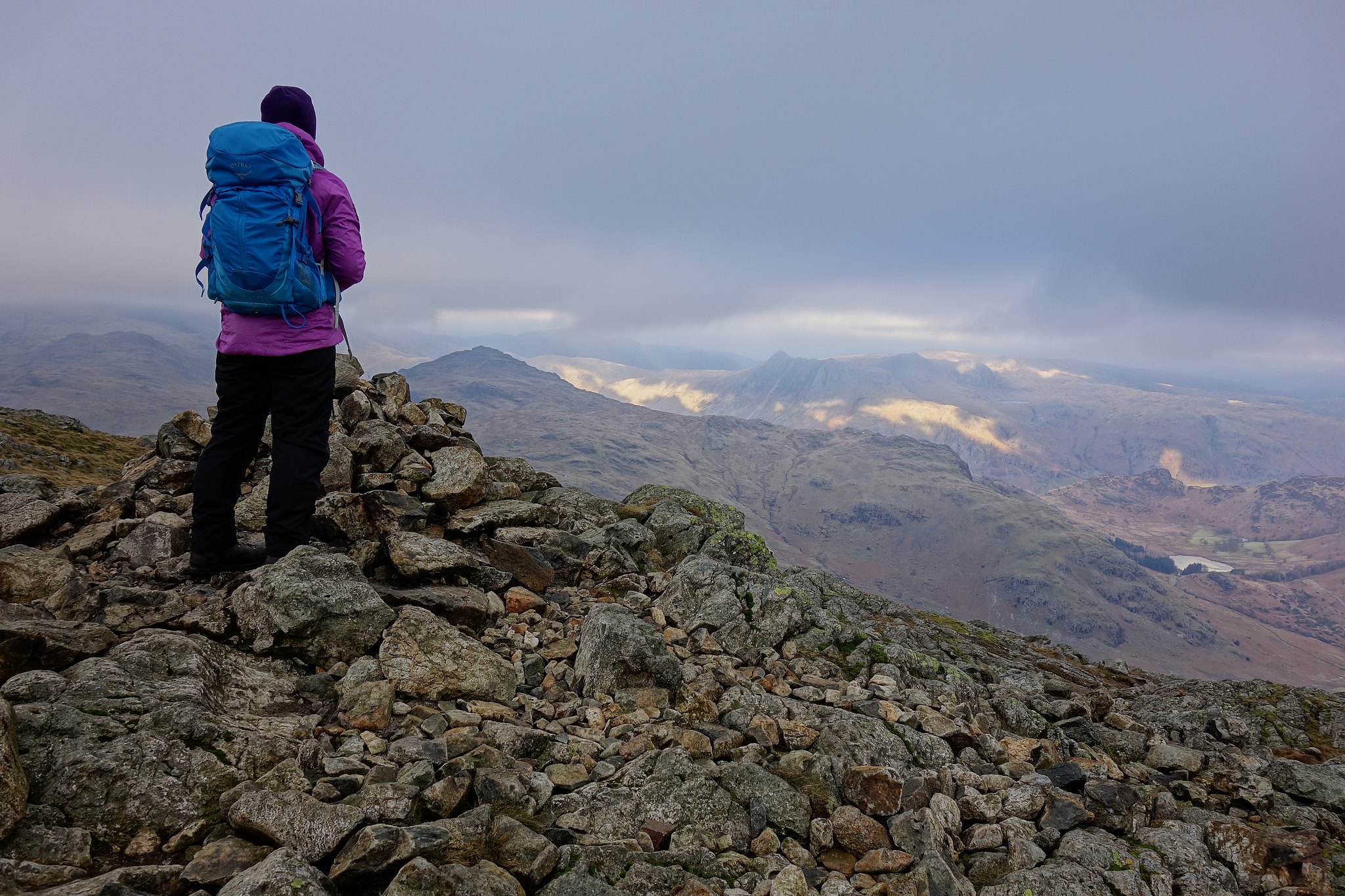 We did get some views from the top although a bit subdued by the haze and grey clouds, the higher tops were wearing cloudy hats so we were lucky to be that bit lower. 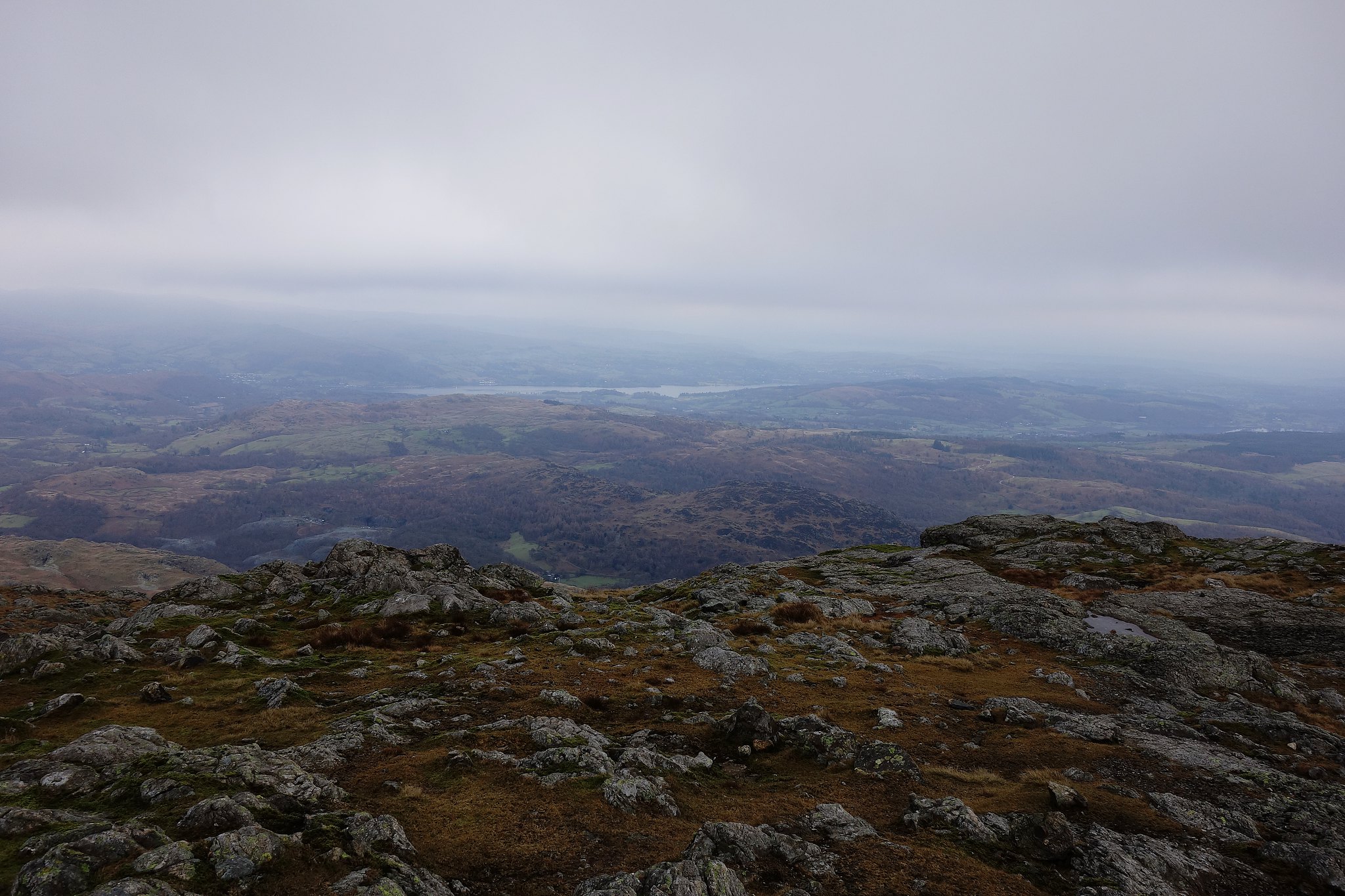 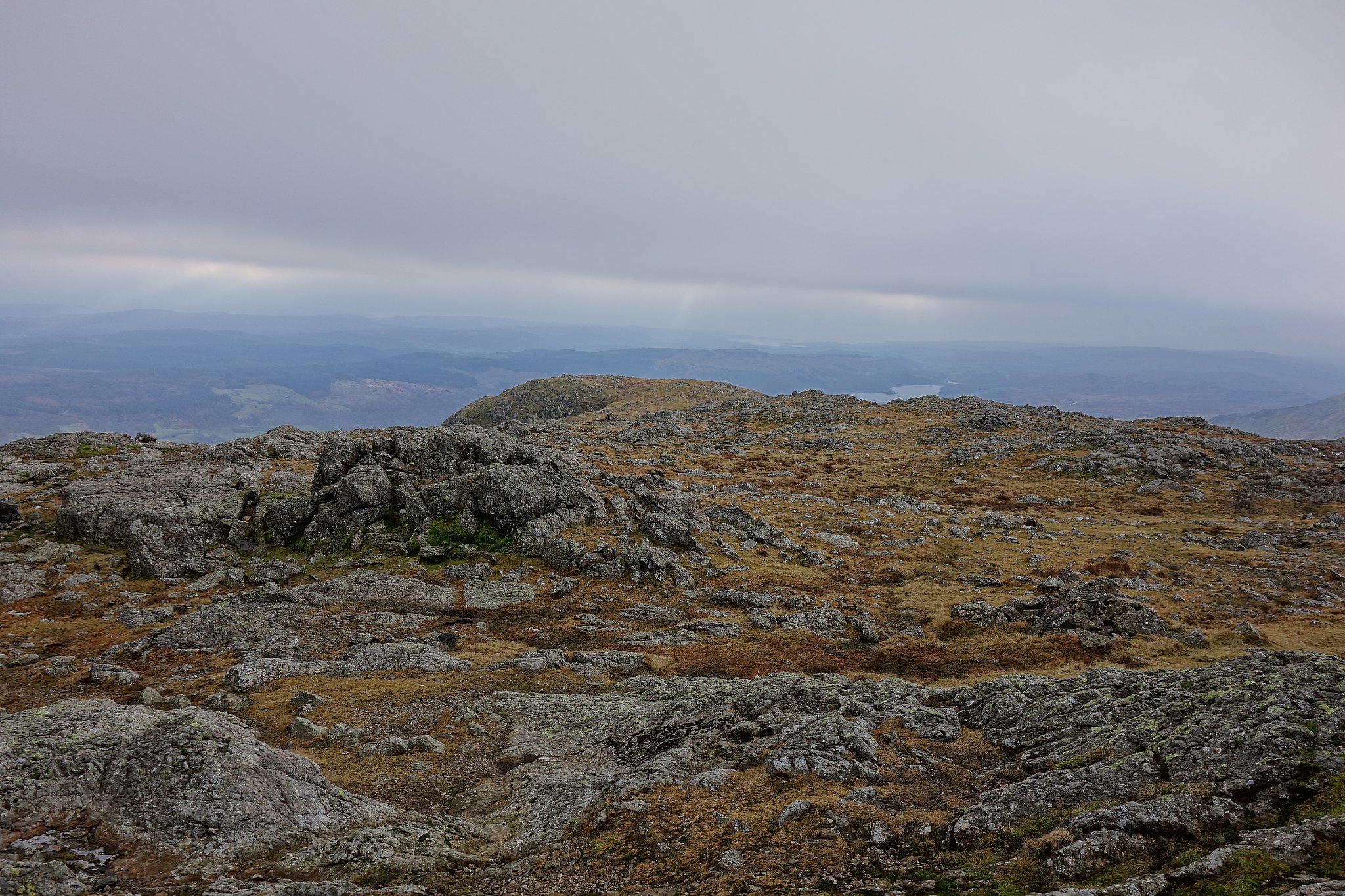 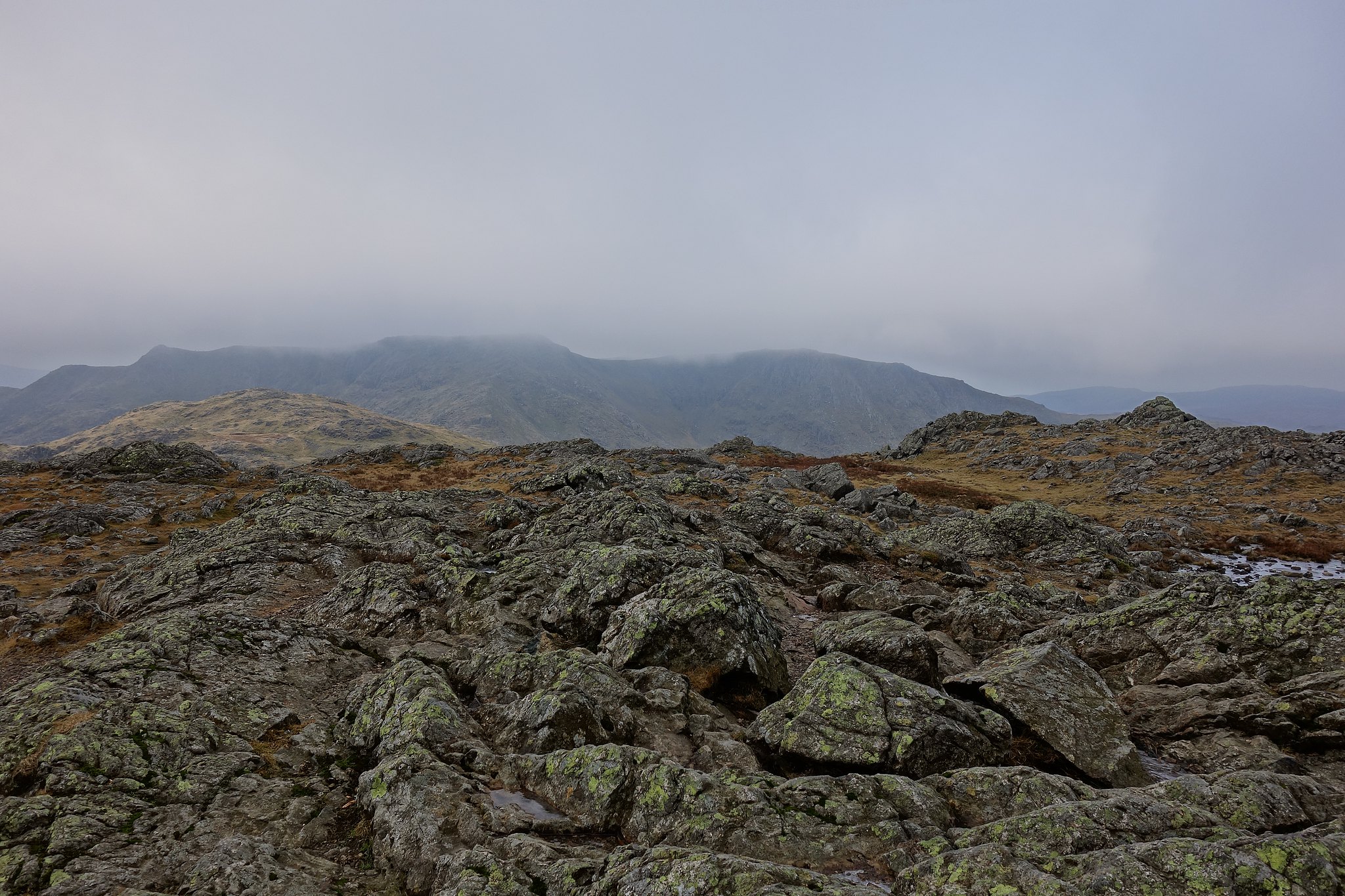 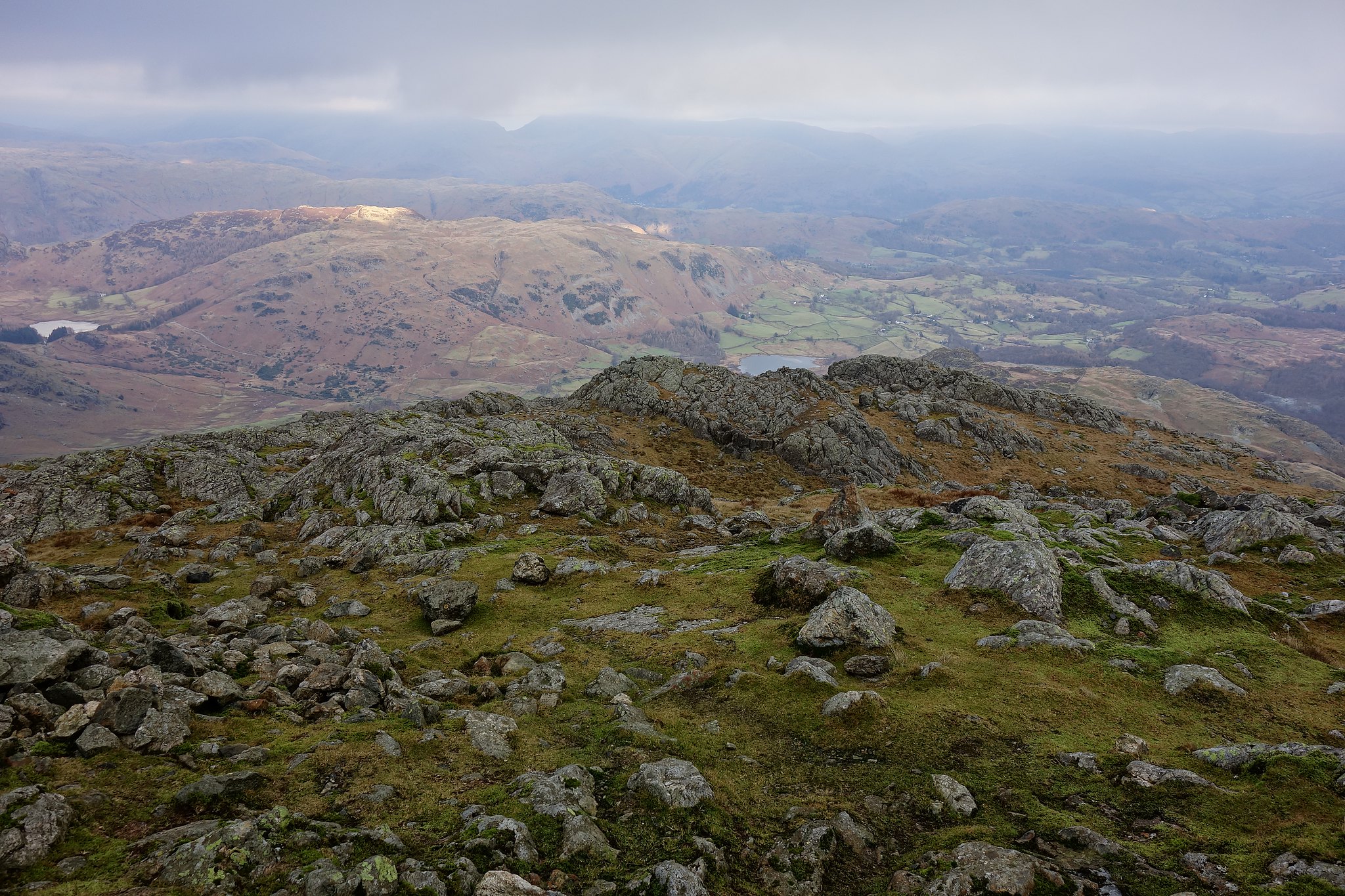 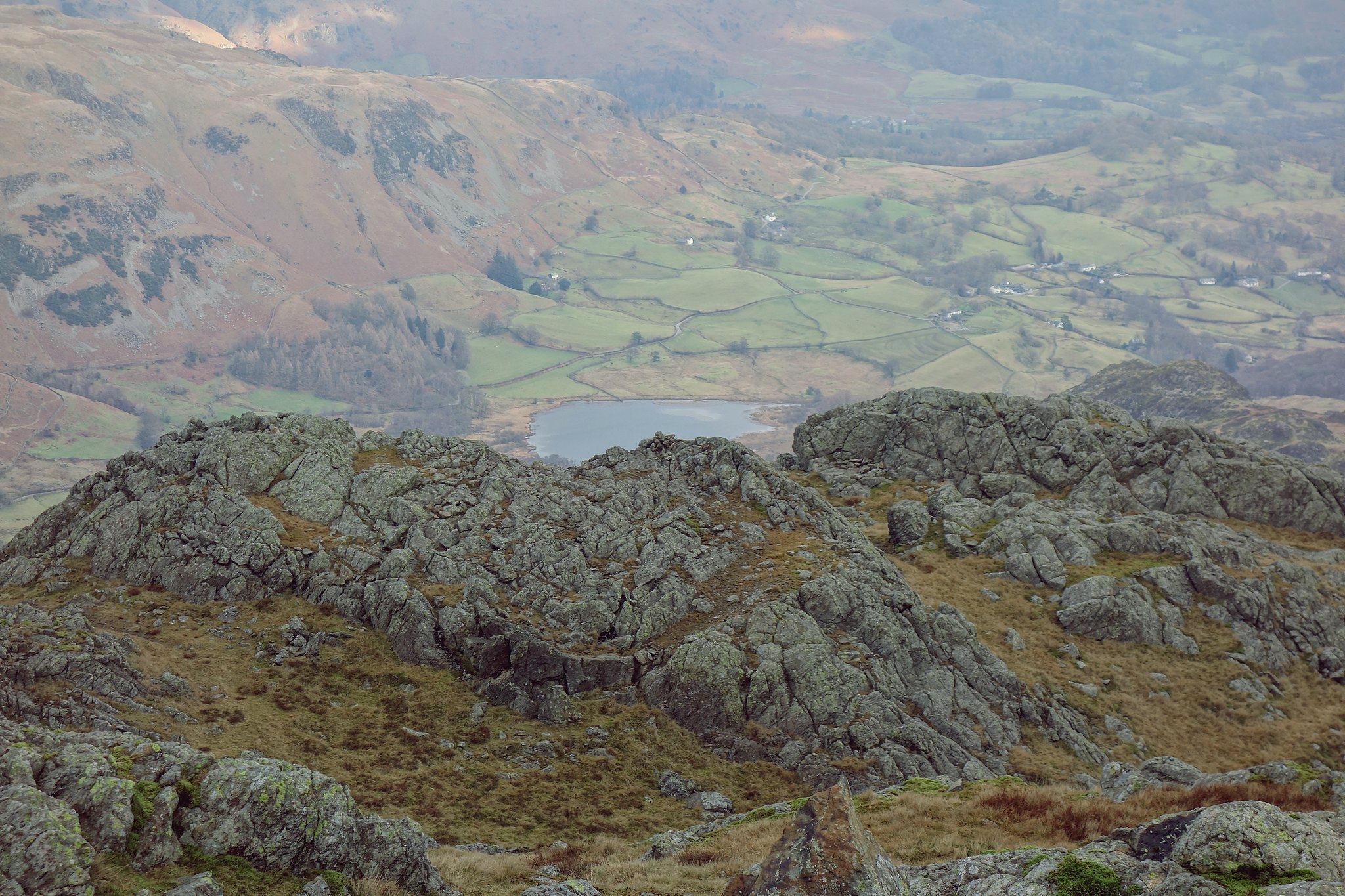 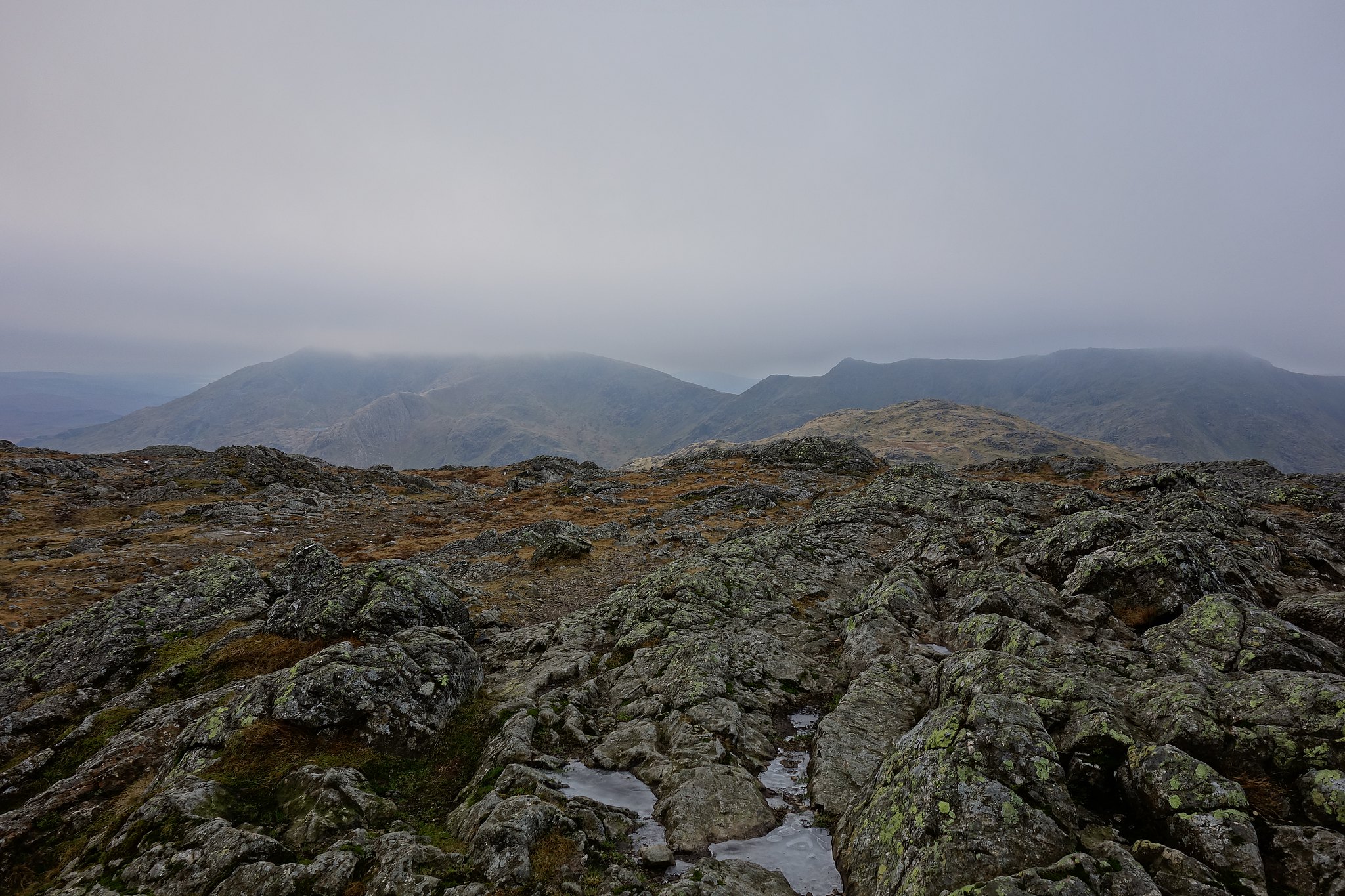 From the summit we headed down the Lad Stones ridge aiming for the miners track around Hole Rake, there's a path leading off the ridge at around SD 292996 but we didn't find its start so we did a bit of off piste walking down the hillside avoiding the craggy bits, there were traces of a path but not much to follow. We were aiming for a crossing over the beck below that's marked on the map, we found that no problem and the path that leads uphill from it, we must have headed off the ridge a bit early and descended a bit to the left of it, any way, we were down and decided to look for somewhere to have a bit of lunch.

We spotted a low wall around the site af an old quarry which sheltered us from the keen little breeze so we sat down and had an extended lunch break looking at the views. 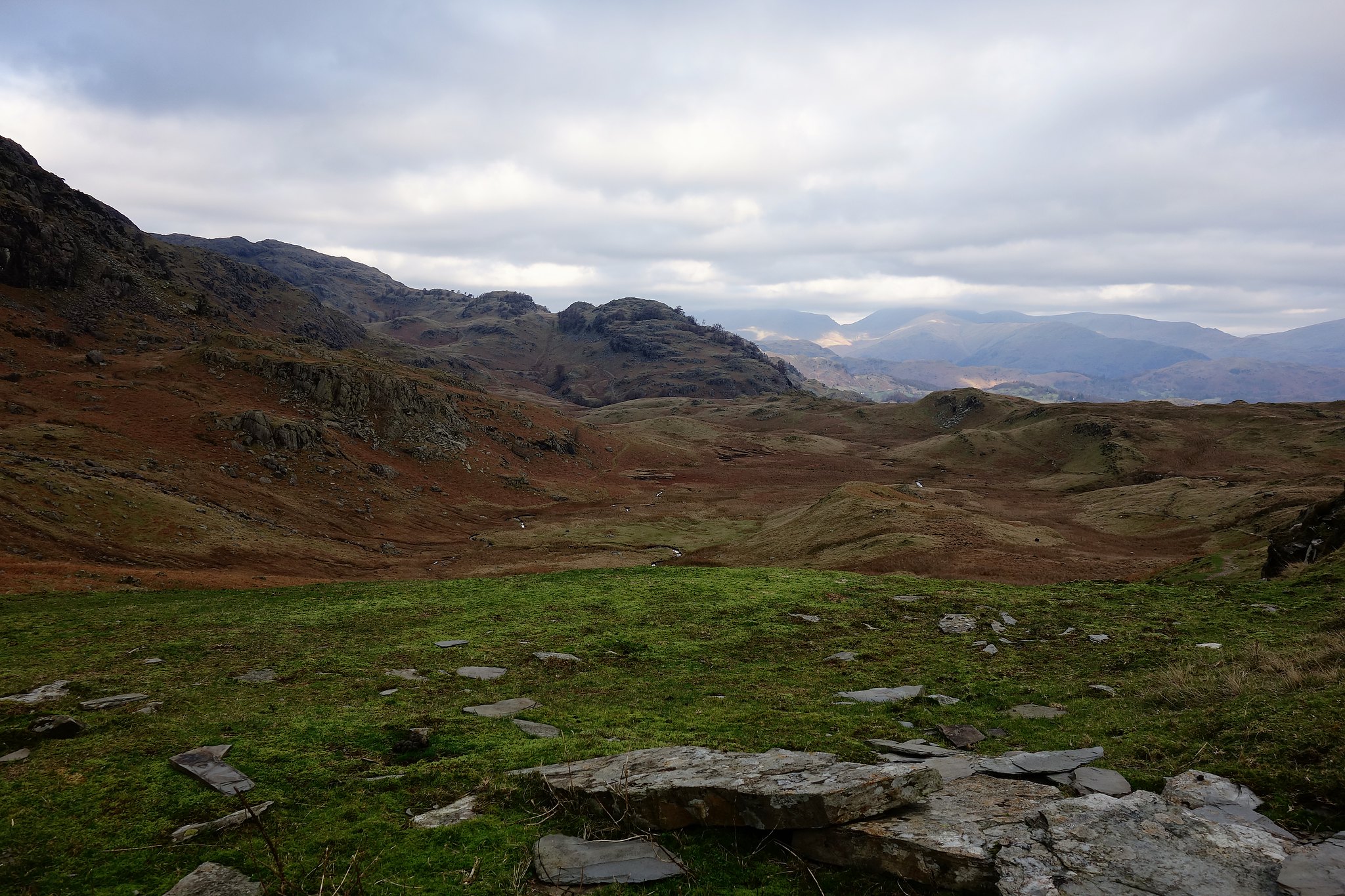 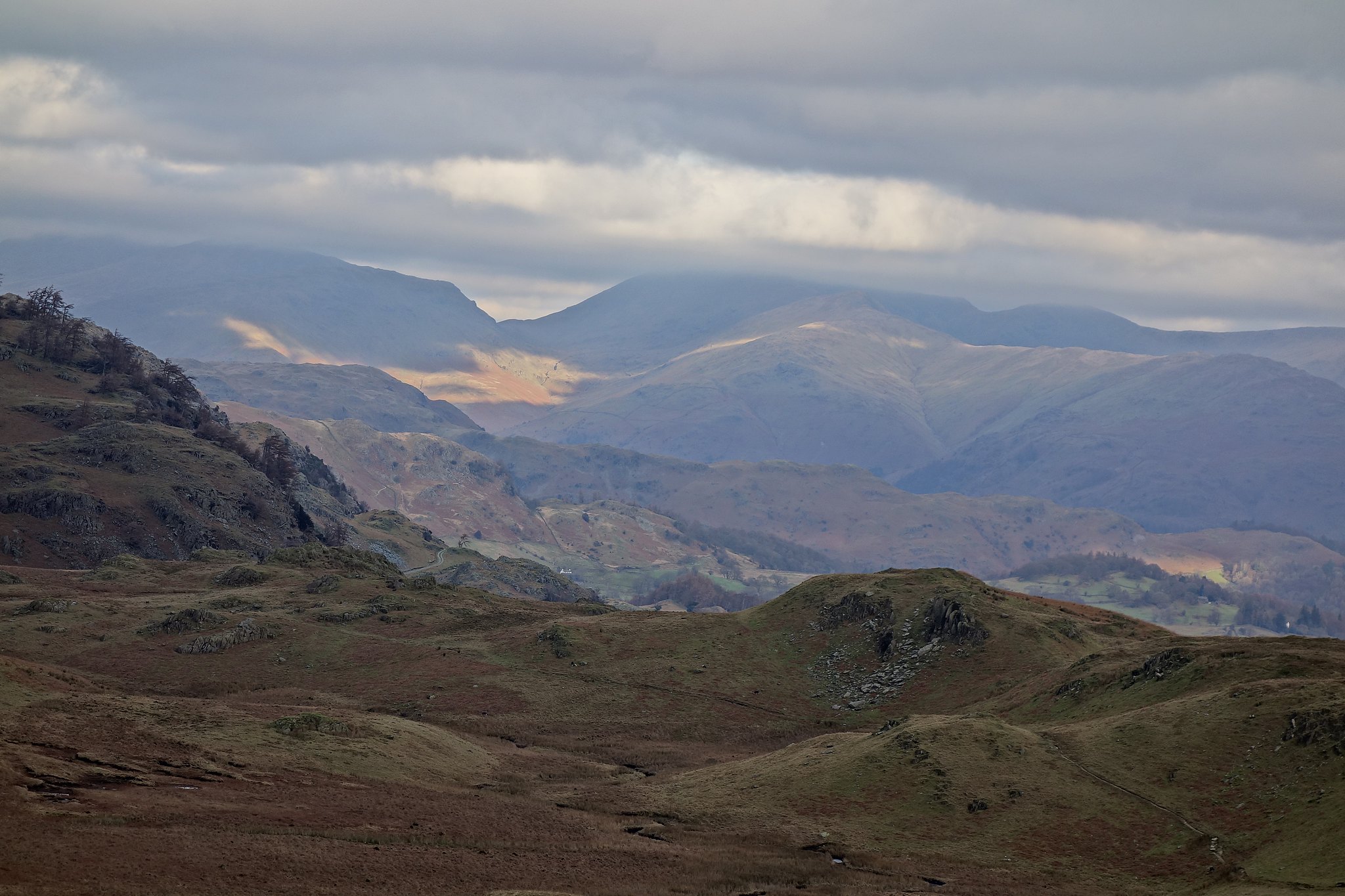 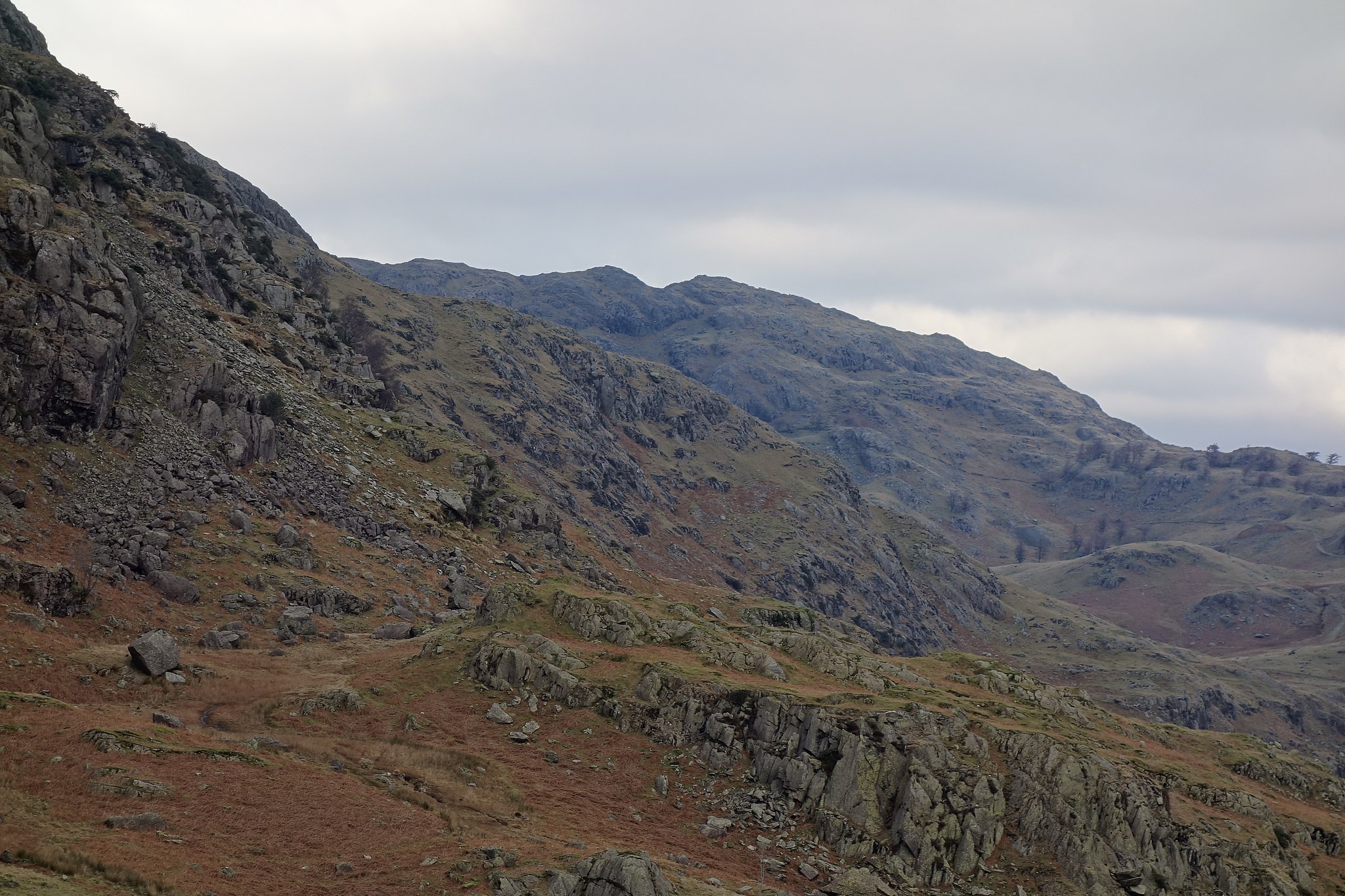 After a while we started to feel a bit cool so we set off on the final section back to the car park.

Quarry on the way down 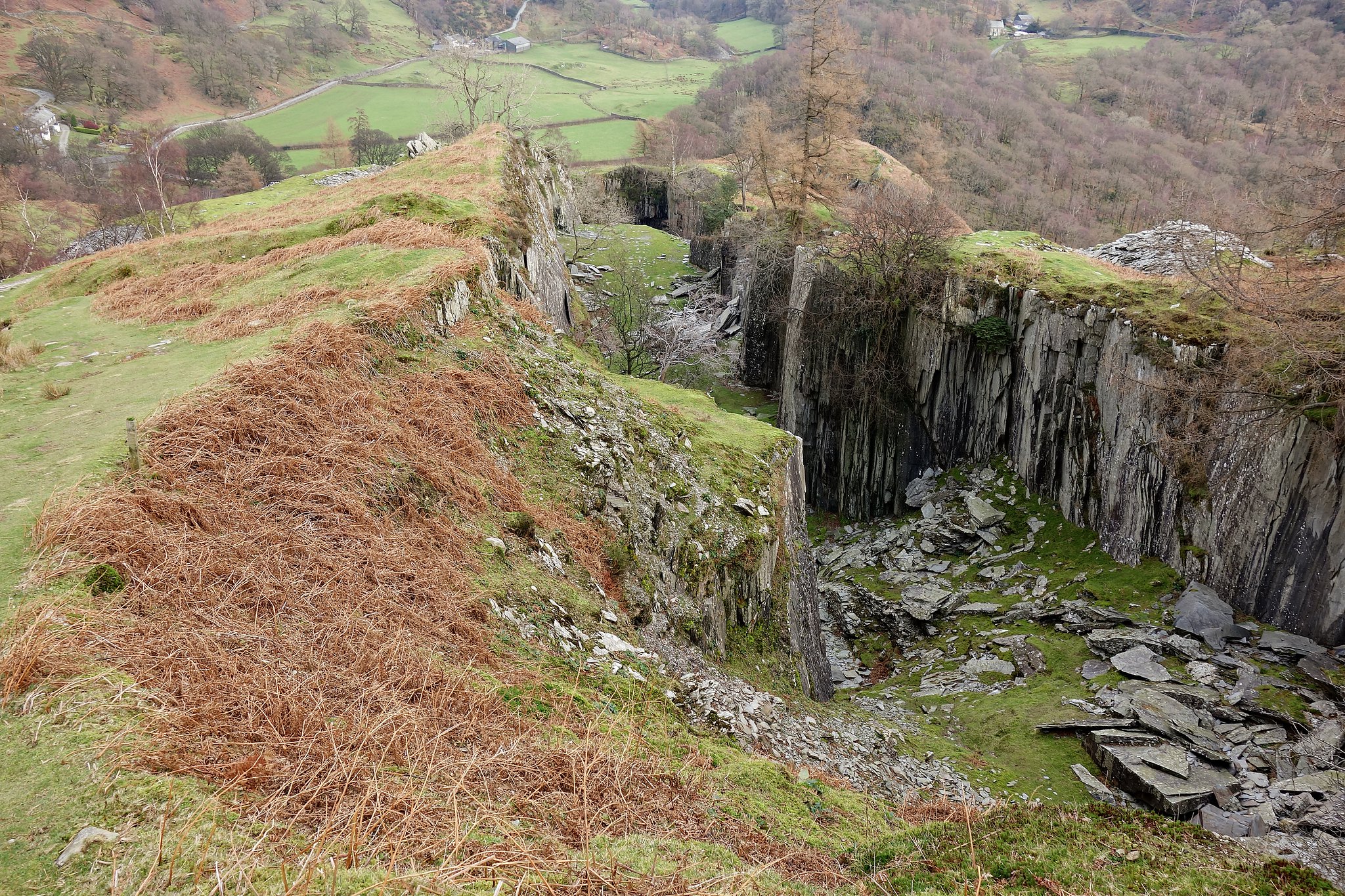 The circle closes, path down to the car park. 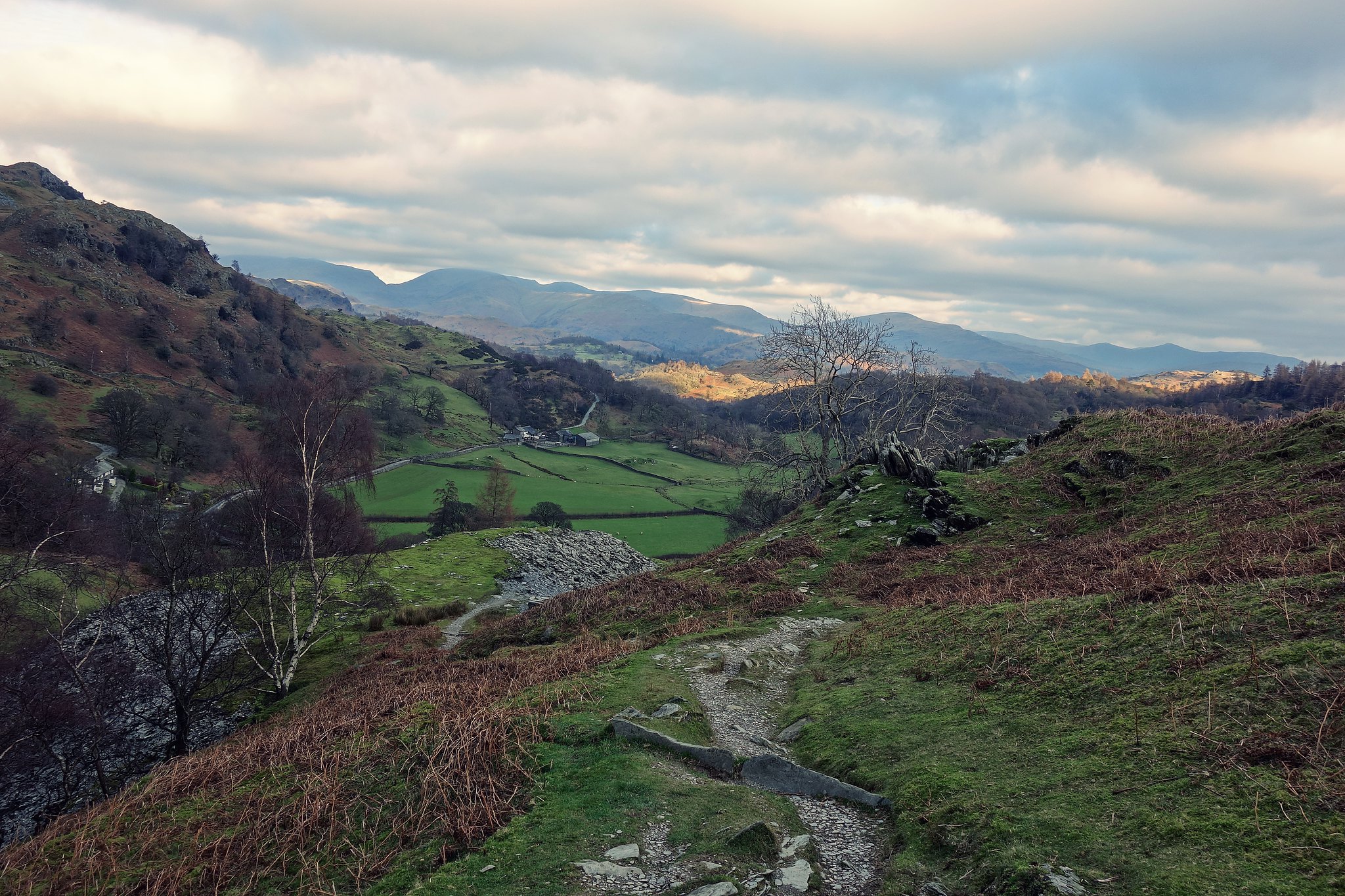 This was an enjoyable day out, nothing difficult and the paths are well established, Tilberthwaite is an ideal little place. When we arrived at the car park it was full to bursting, I bet its a hive of activity again in the summer months but for different reasons than it was at the height of its industrial past.