A winter expedition on Ben More

A winter expedition on Ben More

Alistair, Dad and I set off for the challenge of Ben More about a year ago now, I wrote this report not long afterwards but then it fell off the rader. I had wanted to do this walk ever since seeing pictures of its lovely broad green ridge on walkhighlands.

After leaving Glasgow at 6am we parked up in the dark on a lay by on the opposite side of the road, about quarter of a mile from the start. We lingered in the cold car for a bit, Alistair offered us some cereal but dad and I didn't have much of an appetite due to that 'early morning start nausea', error of the day!! By the time we'd got ready and walked to the start two other cars had arrived and had parked up right there on the wide hard shoulder, a much safer idea.

We knew there would be some snow, in fact we knew that the snow line was at the road, never the less myself being a very inexperienced winter walker was happily imagining a long slog of a nice snowy walk with blue skies and no particular difficulties.

The dawn light was growing rapidly as we crossed the style, it's always amazing to see the world gradually coming clearer, quite a beautiful time of day which I would otherwise miss as I am really not a morning person. For about five minutes the snow covered hills all around us were the same colour as the sky making areas of exposed rock seem as if they were suspended in space.

We could now see the fist section of Ben More sweeping upwards, it looked big but ok. What I didn't realise was that the steep (matterhorn type, swirling in mist

) bit was nicely hidden by cloud, if I'd seen it then I'm not sure I would have carried on. The people from the car were close behind us and as always that made me feel better, like we weren't too mad. 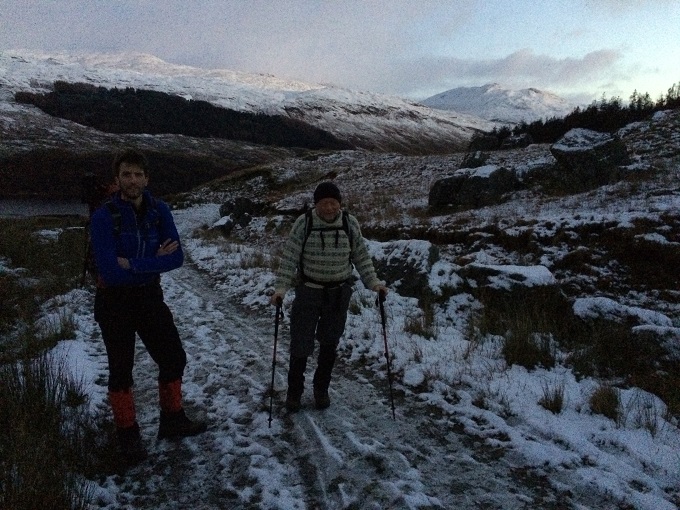 A small cairn on the left side of the main farmers track marked the point where we started up the slope. There was a lot of snow so we couldn't see any particular path but it was fairly ok at this stage, we just headed up. The snow was the wet and slippy kind. As we got higher we kept to the right of the slope and took wide zig zags to make the going easier and safer. 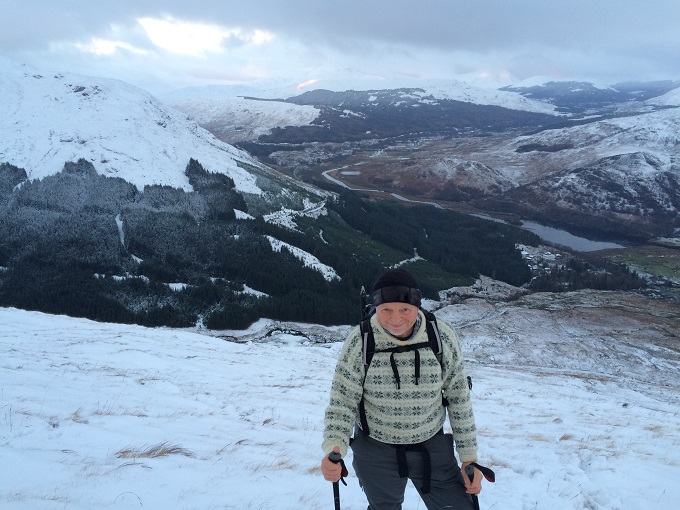 On the snowy slopes with a good view below

It was starting to get a bit hairy for me quite quickly to be honest. I didn't feel that the wet snow made for great security with the angle of the slope, the higher we went the further out of my comfort zone I felt. My vertigo continues to get the better of me!! 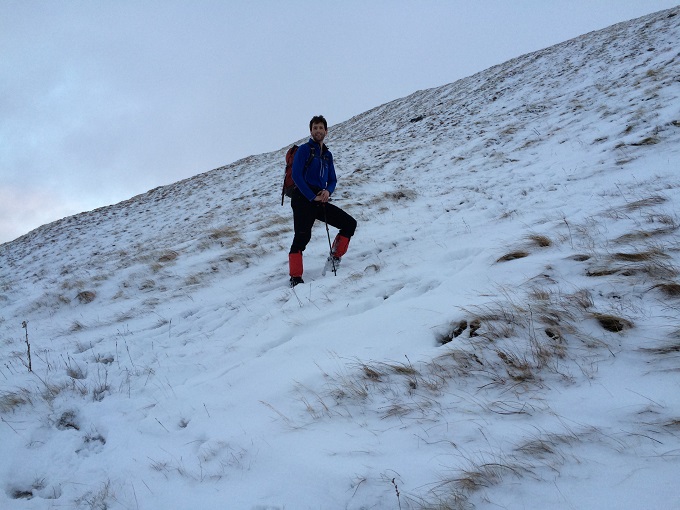 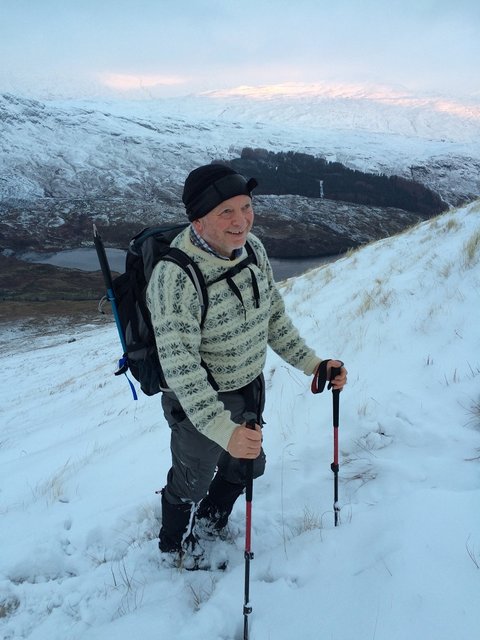 Stopping for a breather, still smiling!

I tried to be confident, trust my feet, and stand up straight but its all counterintuitive when you are scared. My feet only slipped from under me on a few occasions so most of it was in my head and really this was the easy bit. As we got higher the snow was mid calf deep, Alistair lead for a while leaving deep tread marks we could follow. I decided to focus on moving up and ignoring my inner voice telling me that I didn't think I would manage going back down that way should we need to retreat.

We were now into the cloud and it was snowing. The exposed rocks were covered with strange ice formations and suddenly we really were on another planet. I could see the slope a little way in front looking steeper all the time and now very rocky. We hit the fence and followed the line upwards and upwards. There were large drifts by the fence so we had to keep a few metres out to make head way. We also had to avoid the rocks as they were very icy, instead we concentrated on finding deep snow patches in which to place our feet and secure a hold.

I was leading now, I wanted the security of the two guys behind me. It was tiring but I just kept thinking - keep moving up and it will be over. By now the twisting trench of the path was easily marked by deep snow and this proved a good 'safe place' to walk for that reason, and actually it felt easier than the steep slopes below. Further up there was some slightly scrambly icy rocks to pass, I didn't enjoy this but had Alastair held at gun point right behind me helping.

I thought that would be it but no............now the path came out on the side of a slope with a significant drop off to the left, you really wouldn't have wanted to slip here, or anywhere to be honest. The ground was pristinely white and twinkling (in quite surreal way) with fresh snow. We were still in the cloud but had glimpses of ground/a view below form time to time, I was too scared to look but the guys said it was amazing

I was so hungry by now and getting shaky, it was like having a bit of an out of body experience. Very silly, but to be honest once high on the slopes in the wind there wasn't a single point in such conditions that I would have felt comfortable stopping to get something out of my bag. This definitely hammered home the importance of a proper breakfast before setting off and having easily accessible snacks.
Al gave me a cereal bar he had handy in his pocket - sensible man. It helped but didn't digest quickly enough. I felt very jelly legged and as I plodded on towards the summit my fear of heights had temporarily left me, not a good sign.

Thankfully the slopes finally relented and we stumbled up and down behind some rocks (using every last ounce of might), here we could finally shelter from the 40mph winds.
Dad arrived about 5 mins later looking like he felt worse than me - we realised it was very stupid to not have eaten or drunk anything since setting off from the car. Al was the hero of the day handing round hot Ribena which had a miraculous effect, we then got the rest of our lunch into us and were fighting fit again, sort of.

Alistair heard at a mountain lecture once ''the best photos are when you shouldn't be stopping to get your camera out'' - that would have been true here but sadly no photos were taken once we entered the clouds.....more a question of survival mode until we felt back in control.

All lunched up we left our little sheltered haven and made for the trig point. Out here the wind was biting and our temperatures dropped scarily fast. The cloud had really closed in now with only a few metres in all directions visible. To be honest I felt quite alarmed, I am not an experienced winter walker and it was obvious how quickly one could perish up here if lost or injured. Alastair was checking his bearings and double checking them and by this time I could no longer feel my hands. We set off from the trig point down a slope using compass bearings rock to rock, after continuing like this for a while we also confirmed our position with GPS which was great reasurrance. 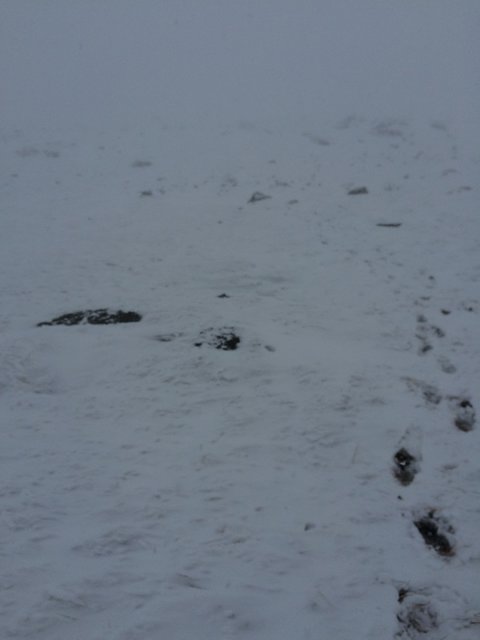 Our visibility after descending from the summit.

The route down to the belach was no bother compared to what had been before. I finally felt out of danger and looked at dad who amusingly had frost on his eye brows. 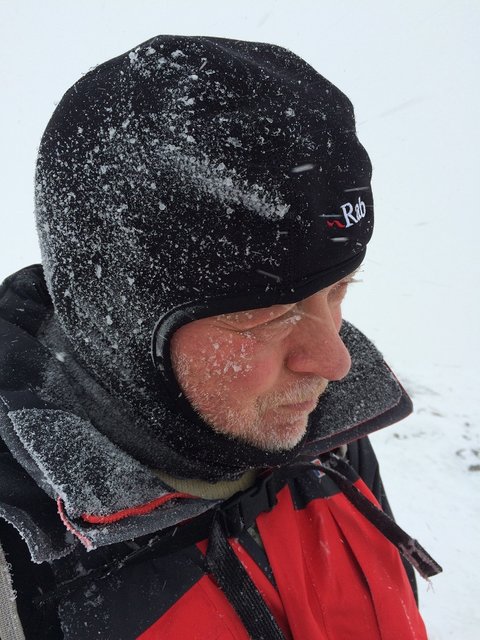 The route up to Stob Binnein was hidden in thick cloud, the wind was strong and it was snowing. I had no desire to go up into those conditions again and had been far out of my comfort zone up on Ben More, so we made a group decision to come back for this one in fairer climes, never easy. 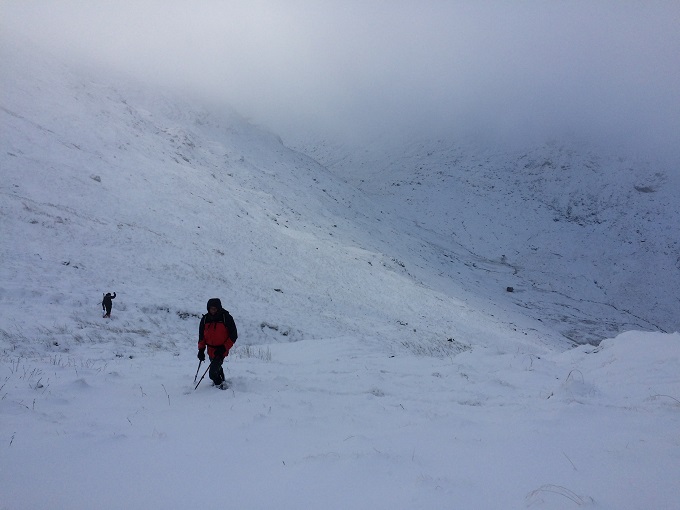 On the retreat path.

As we left the bealach we were finally coming out of the cloud and the sun was trying to shine, the glen below and its large erratic were a beautiful sight. 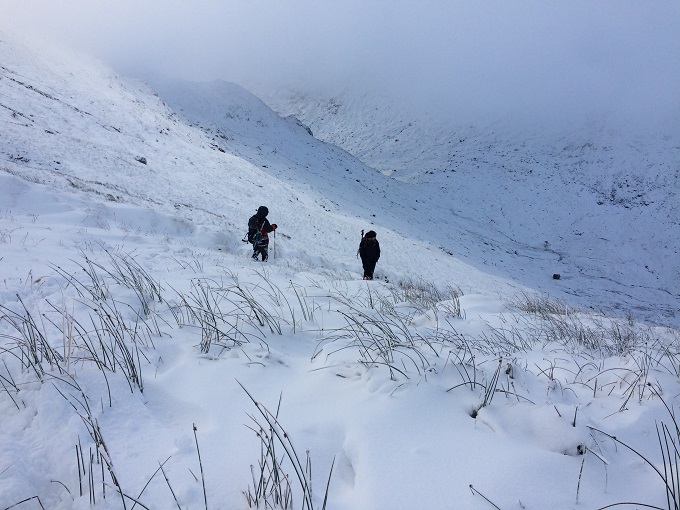 A beautiful snowy glen below 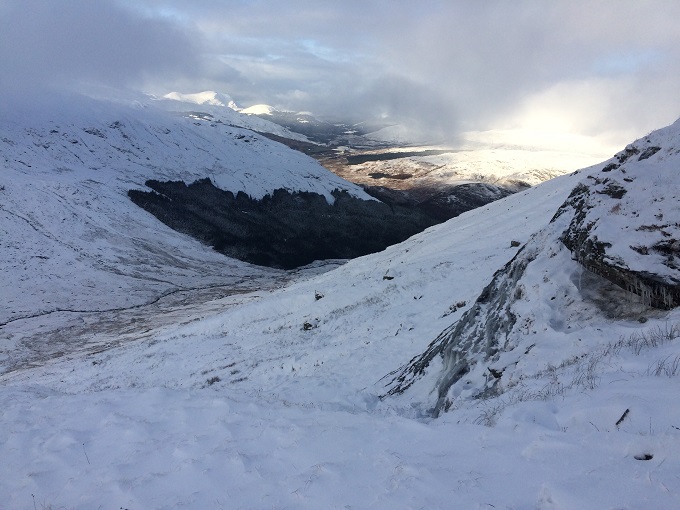 Some winter sun making an apperance

Shortly after deciding to not go on a group of young walkers passed us heading up, we briefly questioned our decision but stuck to our guns and decided to just enjoy the glorious snowy landscape instead. It was easy to pick our way down back to the track, this would have been a much less intimidating way to come up too!!! 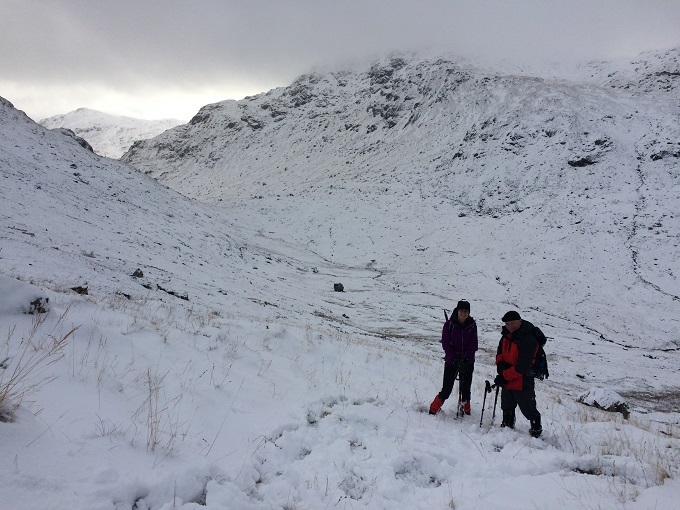 Well and truly out of the storm 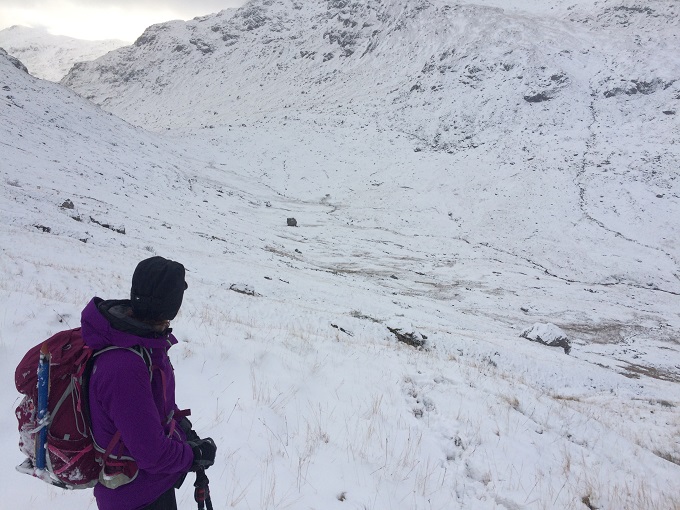 Once back on the track we could see the icy tower of Ben More looming out of the cloud, it certaintly felt good to be back on that tame farmers track. 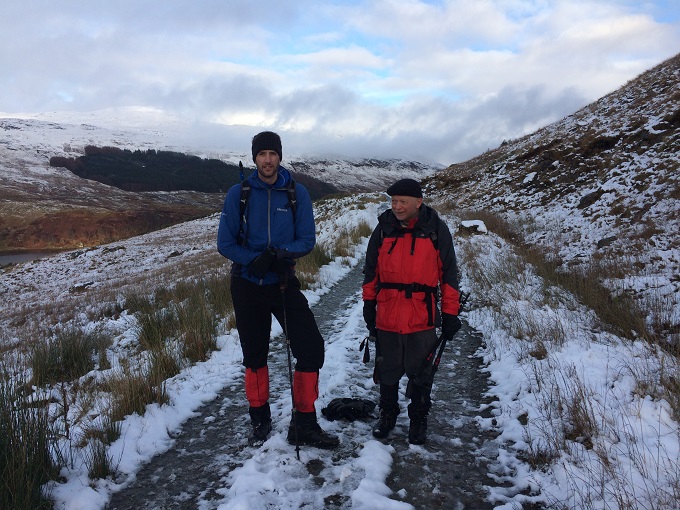 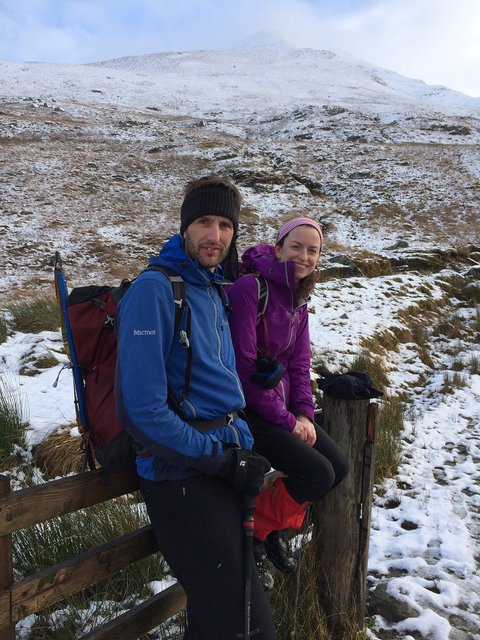 On a gate with the beast behind us

Having arrived back down much earlier than intended we had time for a much welcomed hot coffee and cake in Tyndrum. Dad ordered an ice cream on the side because he was feeling 'thirsty' hmmm........think someone might still not have recovered from his ordeal, either that or he was missing the artic conditions of Ben More already.