Two days into 2019 and no better way to open up the new year than with a trip to the west highlands. With high pressure bossing the weather since Christmas, the forecast promised clear summits once again. 3 new Corbetts at the gateway to Knoydart would be a fine way to round off the holidays before the inevitable return to work in a few days time.

I set off from Banchory at 5am, heading over the Lecht and across Laggan to Glen Spean, as the car thermometer dropped to -7°. I paused briefly to photograph the mirror-like waters of Loch Lochy, reflecting a crescent moon above the Grey Corries ridge, before completing the roller-coaster single track drive to the west end of Loch Arkaig. Not a route for sufferers of car-sickness. It had been 11 years since my last visit here, a November climb of the 3 Sgurr nan Ciche Munros. I was surprised to see the car park almost full, though most cars were frosted up, suggesting overnight visitors braving a bothy stay or camping. At 9am I set off on my bike, a cheeky head-start cycling the 1.5 miles back along the road to the house at Murlaggan. Here I stowed the bike and prepared for a direct assault on my first Corbett of the day, Sgurr Mhurlagain. I stumbled across the story later that in the days of the Jacobite uprising, a local landowner Alexander McMillan was rumoured to have hidden Prince Charlie’s gold at the near-by Callich Burn, whilst the redcoat troops were hot on their tail.

The southern aspect of Sgurr Mhurlagain gave a pathless trudge up open grassy slopes, but all the interest came from the spectacular sunrise behind me. The veil of mist that been hugging the waters of Loch Arkaig seemed to bubble upwards and follow my ascent, until I climbed into bright sunshine and could photograph the cloud sea below. Always a breathtaking spectacle! 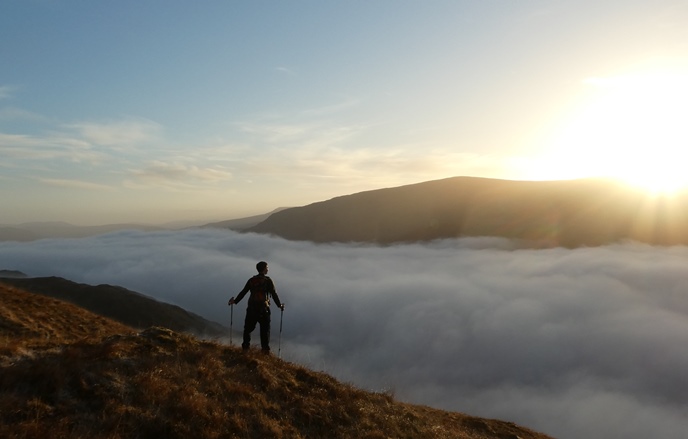 Sunlight spilling across the flanks of Gulvain

I followed the line of a tumbling stream, lined with icicle formations gleaming in the sun, through a rocky bluff onto the broad ridge above. I was dismayed to notice a sheet of grey cloud drifting in from the west, hardly in keeping with the forecast late afternoon/evening before it began to fill in. However I made sure I enjoyed the remains of the day’s sunshine, lighting up the snow-dusted slopes that led gradually to the summit, with evidence of periglacial-terracing picked out in the low morning light. My route followed the burn in the middle of the picture Icicles in the burn 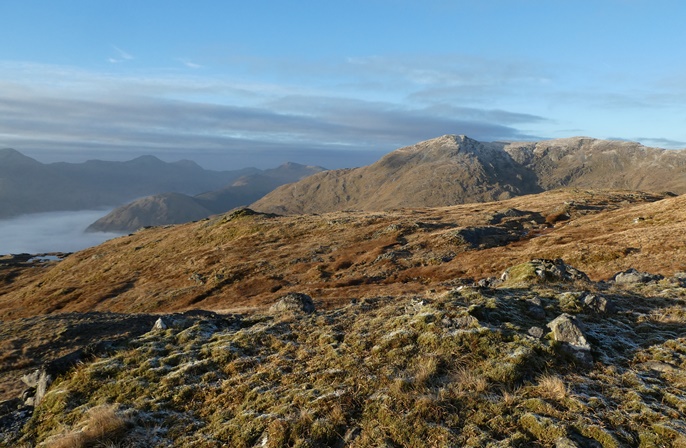 Looking over towards Fraoch Bheinn The summit slopes of Sgurr Mhurlagain, periglacial terraces visible on the right 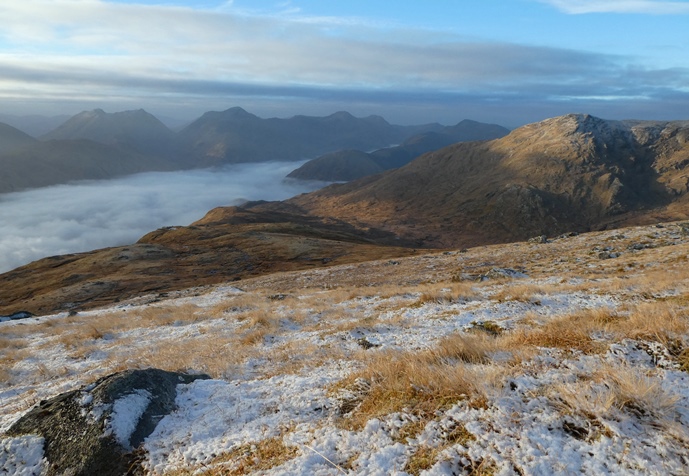 Looking back towards Loch Arkaig The small summit cairn, sitting just short of Munro height at 2886 feet, sat barely a yard from a steep drop on the north side, close enough to cause concern as I circled it for photographs. Sunbeams filtered through spectacularly lighting up the waters of Loch Arkaig, but it was merely the curtain call for the good light conditions. It was only 11am and I wasn’t enthralled at the prospect of the rest of the day in the cold, drab shade that accompanies cloudy skies at this time of year. But the mountain tops remained clear and the expense of a 3.5 hour drive across Scotland was not to be squandered, so I aimed to press onwards with my original schedule towards my next Corbett, Fraoch Bheinn. Looking from the summit of Sgurr Mhurlagain northwards towards Sgurr Mor I descended down through the recent dusting of snow to a broad, mossy area, terrain resembling a sodden sponge left in the freezer. There was a peace and calmness to the air, not a breath of wind, allowing the fleece to be shed as I picked a direct line up the rocky eastern flank of Fraoch Bheinn. T-shirt weather but ice-glazed rocks were still keeping me to the grassy areas, with small steps taken up the steep, pathless ground to keep my second wind in my sails. The debris from a giant rockfall cast a huge scar across the hillside, with a metres-wide crack suggesting further collapse was imminent. I skirted a crag to the right and soon topped out besides the summit cairn at 12:30pm, retreating from a westerly breeze to have my first bite of the pasta lunch I’d prepared – albeit with the lid utilised in the absence of a spoon Huge landslide on the flanks of Fraoch Bheinn, a crack hinting at further falls to come Looking across to Sgurr Cos na Breach Laoigh from Fraoch Bheinn

A half-hour descent down steep grass and the odd rocky bluff took me to the burn in the corrie below, a 500m height loss after the previous 400m one – typical Corbetts! A solitary walker was spotted in the distance heading through the pass from Glen Kingie, returning from an ascent of the remote Sgurr Mor I presumed. The final substantial ascent of the day went well, but the deep moss on the broad, pathless ridge above was energy-sapping. The semi-frozen turf carried my weight momentarily before my boots sank down, like walking on ice-crusted snow. I scanned for remnants of the earlier sunshine, my gaze falling on - ironically - the distant Grey Corries. An intended short-cut, traversing south across the intermediate top of Druim a’Chuirn, had the usual result of inflicting more pain on my ankles than relief at the ascent avoided. Footprints in the dusting of snow revealed two walkers, to my surprise, had trodden my path earlier in the day. The low point on the long summit ridge is marked by a rock pinnacle, A’Choich, which may have invited a scramble on another occasion. However I pressed on along the narrowest ridge of the day to the summit my final Corbett, Sgurr na Cos Breach Laoigh, Peak of the hollow of the speckled calf, at 2.45pm. Summit of the third Corbett of the day

The summit was an excellent viewpoint, with the islands of Rum and Eigg visible as faint shadows to the west. Illuminated by sunshine, the panorama would’ve been jawdropping, but today the palette was sombre browns and greys. Bidein a’Chabair caught the eye as a sharp-topped Corbett that promised an adventurous route to its top. The knolls around the small cairn carried water that would invite a dip on a warm summer’s day. A call to Dad revealed they were enjoying a slap-up meal at the Dundee Beefeater, some comparison to the leftover cold pasta I struggling to scoop up with a tupperware lid I flanked the initial craggy sections of the south ridge, that had been visible from the opposite side of the horseshoe, on the west side. Of the entire route, this ridge was the least suitable for the fast, bounding descent you want to round off a day. The glen below, through which the River Dessary snaked, wore an icy hue suggesting it had remained sub-zero all day. At 4pm I reached the buildings around Glendessary Lodge, modern-looking albeit empty at this time of year. Two walkers were half a mile ahead of me, only the third set of people I had seen all day. I footed out the remaining mile and a half in 30 minutes, rediscovering an old pastime of passing the miles devouring an orange as meticulously as patience would allow. I passed a ruined building beside the track which, upon future checking, turned out to be Taigh nan Saighdearan, the remains of a barracks built in the ’45 rebellion. The headtorches I'd packed remained unused as I arrived back at the van in the twilight. The two walkers I'd seen ahead were returning from a freezing night in Glen Kingie bothy. Looking back up to the descent ridge from Glen Dessary After retrieving my bike from Murlaggan, the drive home in darkness was a long one, completed with one pause by the roadside at Loch Lochy for a nap, returning to Banchory by 9pm. I was pleased to have completed my day’s plan of 3 new Corbetts, at no small price of almost 6000ft of ascent, despite the let-down of the weather. After the spectacular inversion of the morning, the afternoon visuals had hardly being a riot of colour, but the serenity and remoteness of this western end of Loch Arkaig was something to be savoured.

Lovely hills these, especially Sgurr Cos (the full name is too long to pronounce

Great photos of the inversion. That's a seriously impressive crack on Fraoch Bheinn too!

Had a fantastic time on these three back in August, thanks for the memories.

BlackPanther wrote:Lovely hills these, especially Sgurr Cos (the full name is too long to pronounce

More and more I find the presence of the sun on a walk makes all the difference! The physical challenge aspect and satisfaction is always there, but some sunshine to set alight the colours and bring out the features increases the enjoyment - and the quality of the photos - 10 fold for me

Living over near Aberdeen is great for Lochnagar and the Cairngorms but for the west coast, a bit of a nightmare! Probably not the first person to leave a lot of the west coast Munros /Cuillin towards the end which meant A LOT of driving to round up my last 50 or so - fortunately they're the finest hills of all so well worth it