Whilst walking the Moel Eilio / Moel Cynghorion ridge in October 2017 I'd noted an attractive looking conical hill to the East, which the map identified as Yr Aran...

...and I made a mental note to walk it in the not-too-distant future, ideally combining it with a meander along the 2 Clogwyn Du's (Clogwyn Du'r Arddu, which runs up East from Moel Cynghorion; and Clogwyn Du proper, which runs North-South between Allt Meanderyn and Yr Wyddfa). The former looked spectacular viewed from Moel Cynghorion; the latter I've never seen - for although I've walked the Snowdon Horseshoe dozens of times, it's always been in clag!!).

After discovering I have developed AF, November and early December were rather tied up with medical stuff, so I was now, as usual, going stir crazy. But fortunately Dr Frank and I managed to find a date that worked for both of us, and we'd more or less agreed in advance to do a loop around Yr Wyddfa that included Yr Aran. The forecast was fine with cloud starting around 700m, so with a bit of luck we might summit Yr Aran when it was clear.

Travelling to Snowdonia from different directions, we agreed to meet up at Pen-y-pass, and then drive down to the car park at Clogwyn Melyn/Plas Gwynant, where we would start. The plan was for a short route that started with Yr Aran, and encompassed Yr Wyddfa (Snowdon summit) and Y Lliwedd, the latter giving the best views of Clogwyn Du, we hoped. 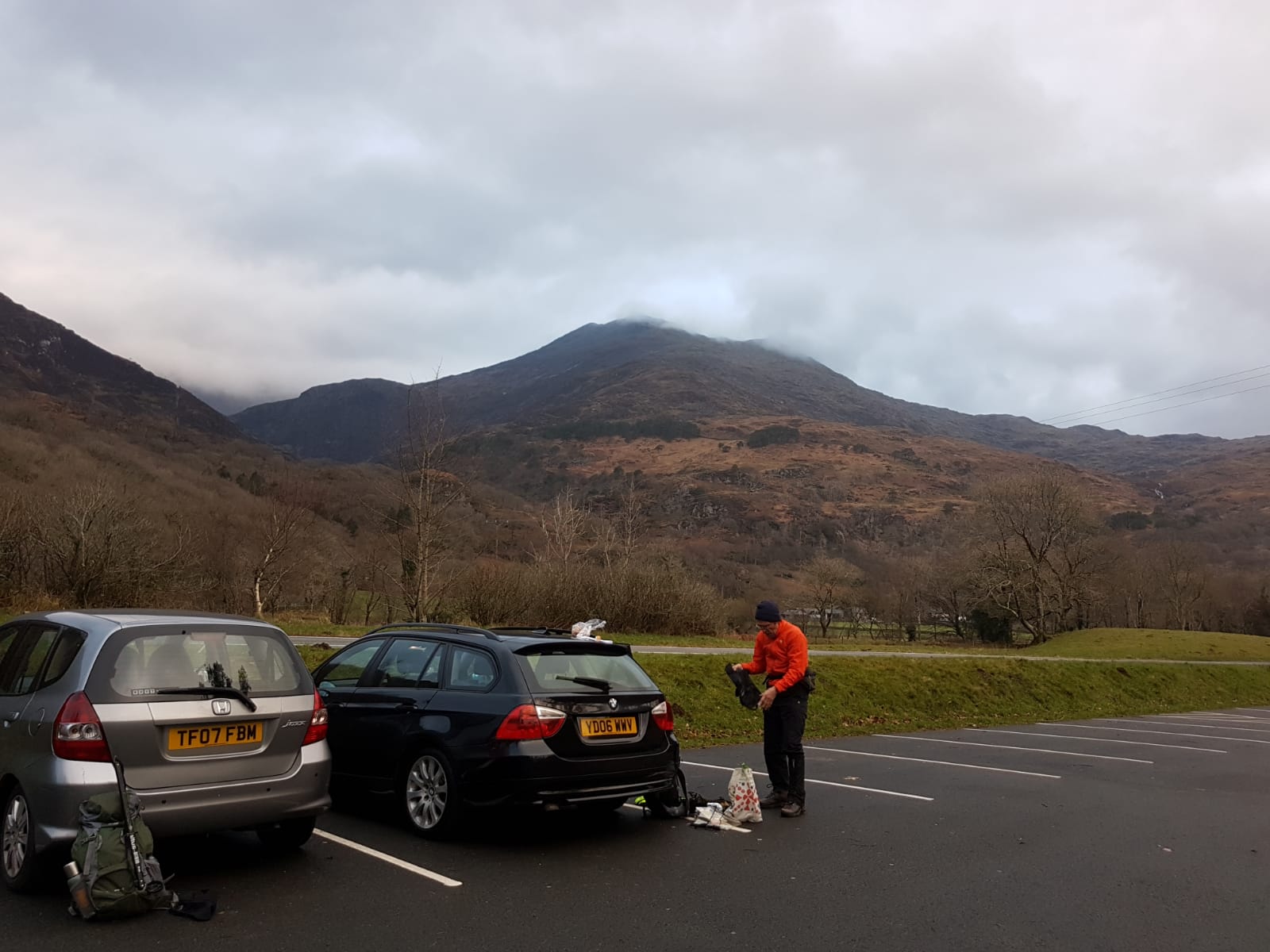 The late planned start due to winter daylight hours meant that I misjudged what the traffic would be like, and I arrived rather late; but after the usual extended faffing about, we did eventually get moving around 09.30.

The initial part of our route followed the Watkin Path - which, living to the East of Snowdonia, I'd never walked - up Cwm Llan. A most attractive route. 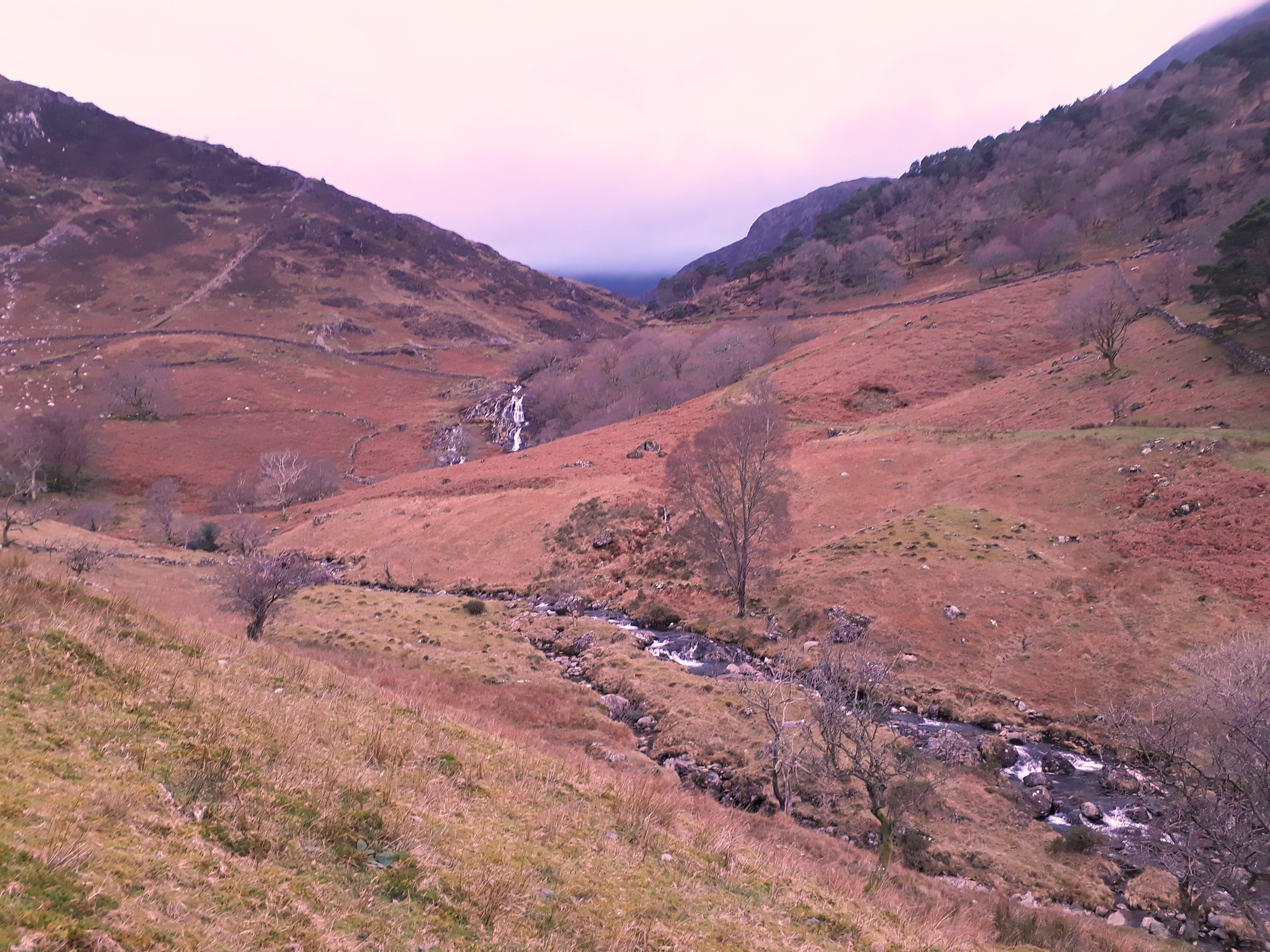 Looking back East, we started to get this superb view of the wonderfully lumpy and bumpy ridge that runs from Bwlch y Rhediad up to Moel Meirch, and made another mental note that this was definitely another one that deserved a walk. 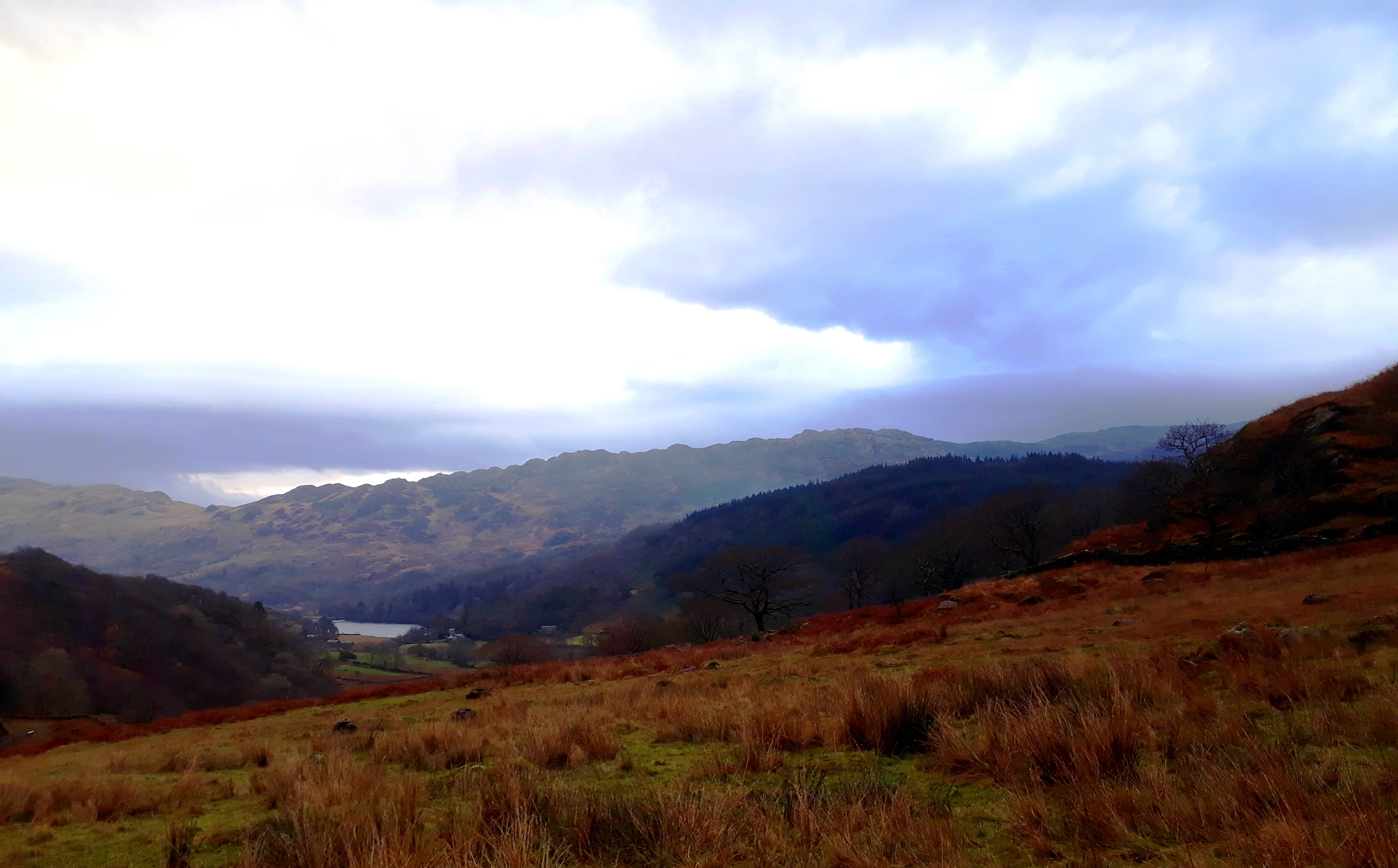 As we approached the point at which we had to bear off left from the Watkin Path, we got our first view of Yr Aran - clear of cloud - just!

After 5 minutes or so on the new path, we left it, bearing further South towards the low point in the ridge that leads up to Yr Aran. It's rough, but fairly straightforward going. Unfortunately AF leaves one horribly short of breath, so I was depressingly slow

As we approach the summit, the moody sky created some very atmospheric views out South West towards Tremadoc Bay... 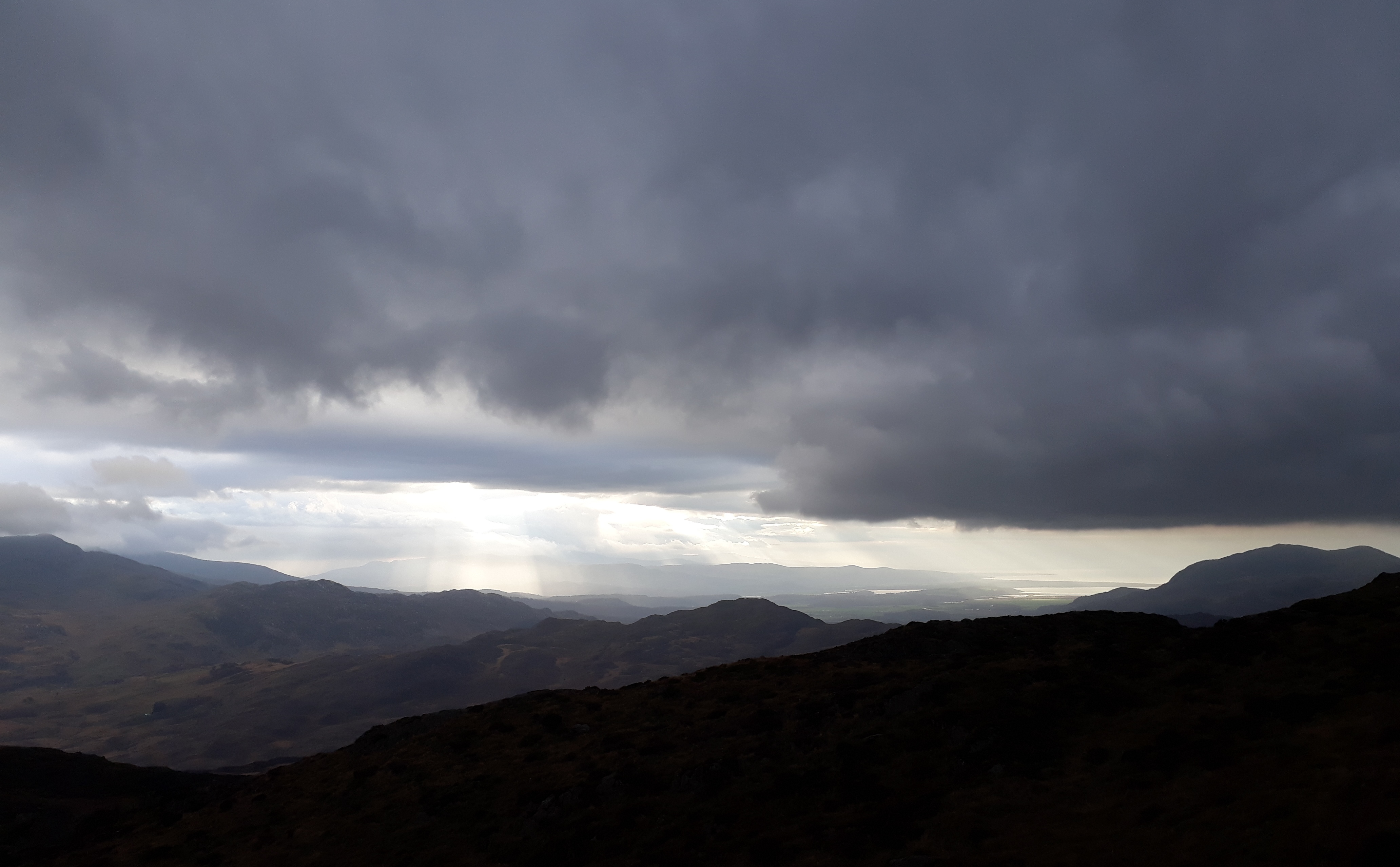 The slope over the final 150m or so of ascent is easier than before, and we got to the top about one and three quarter hours after we started. 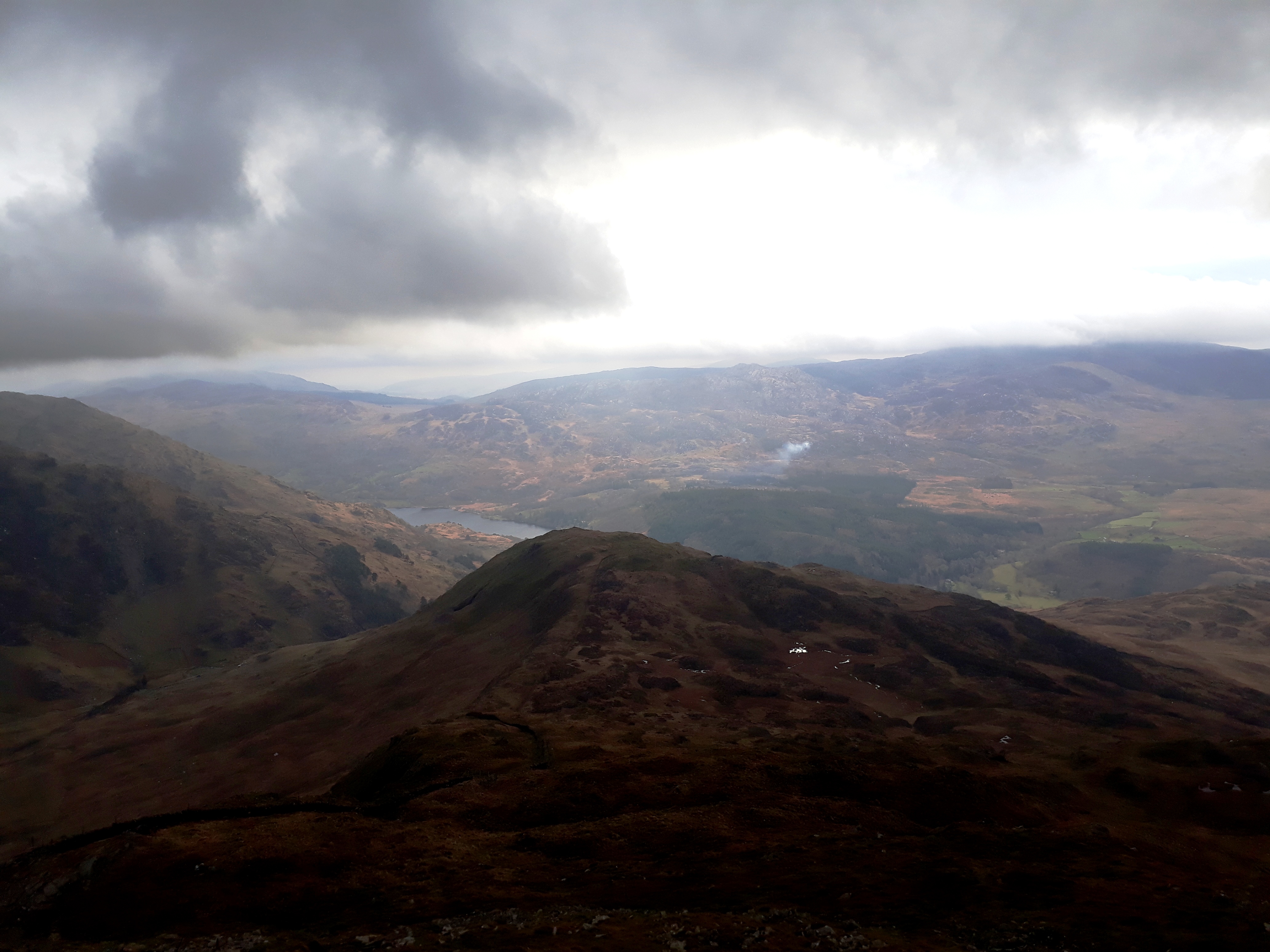 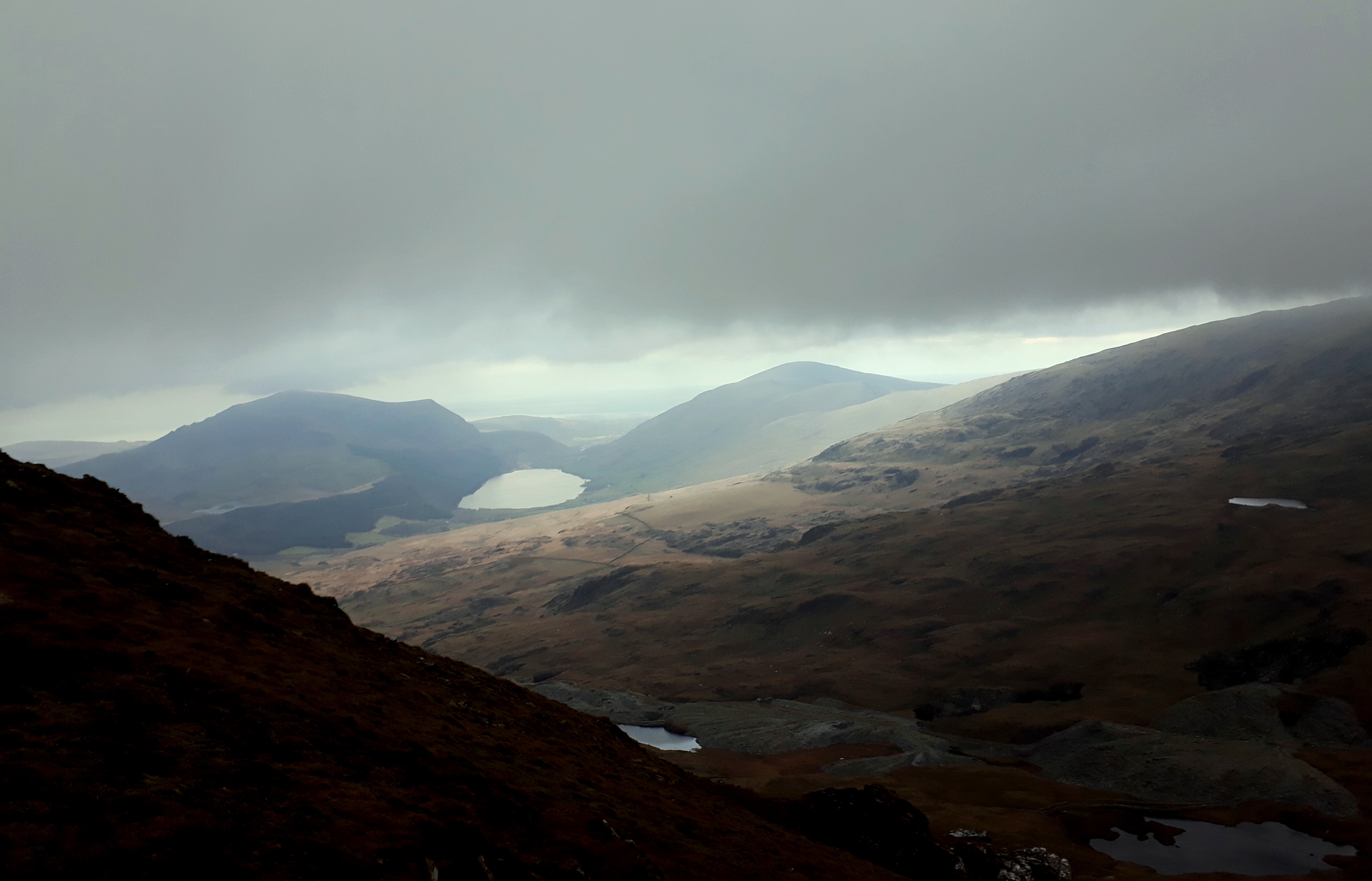 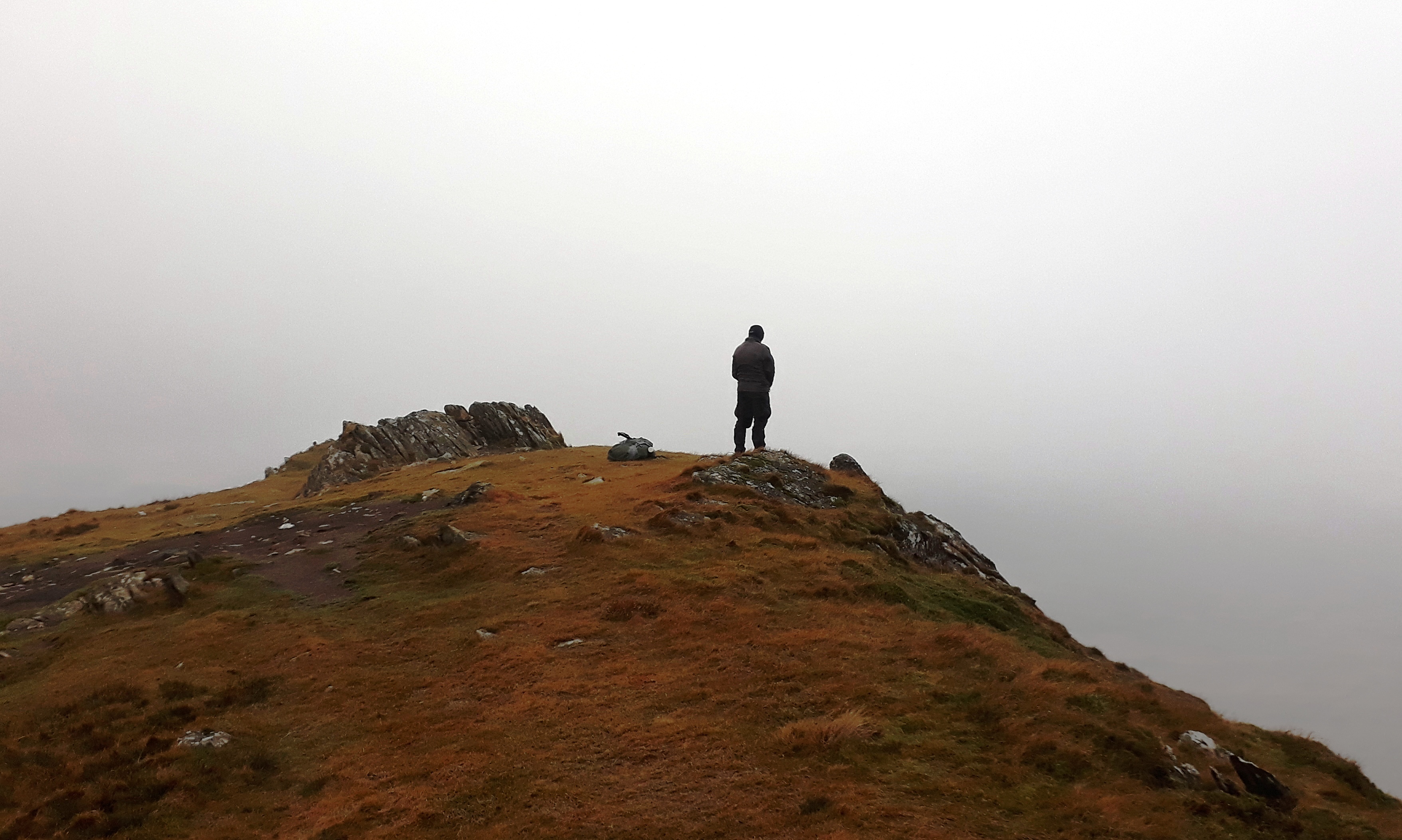 From the summit of Yr Aran, it's a steep descent down into Bwlch Cwm Llan. 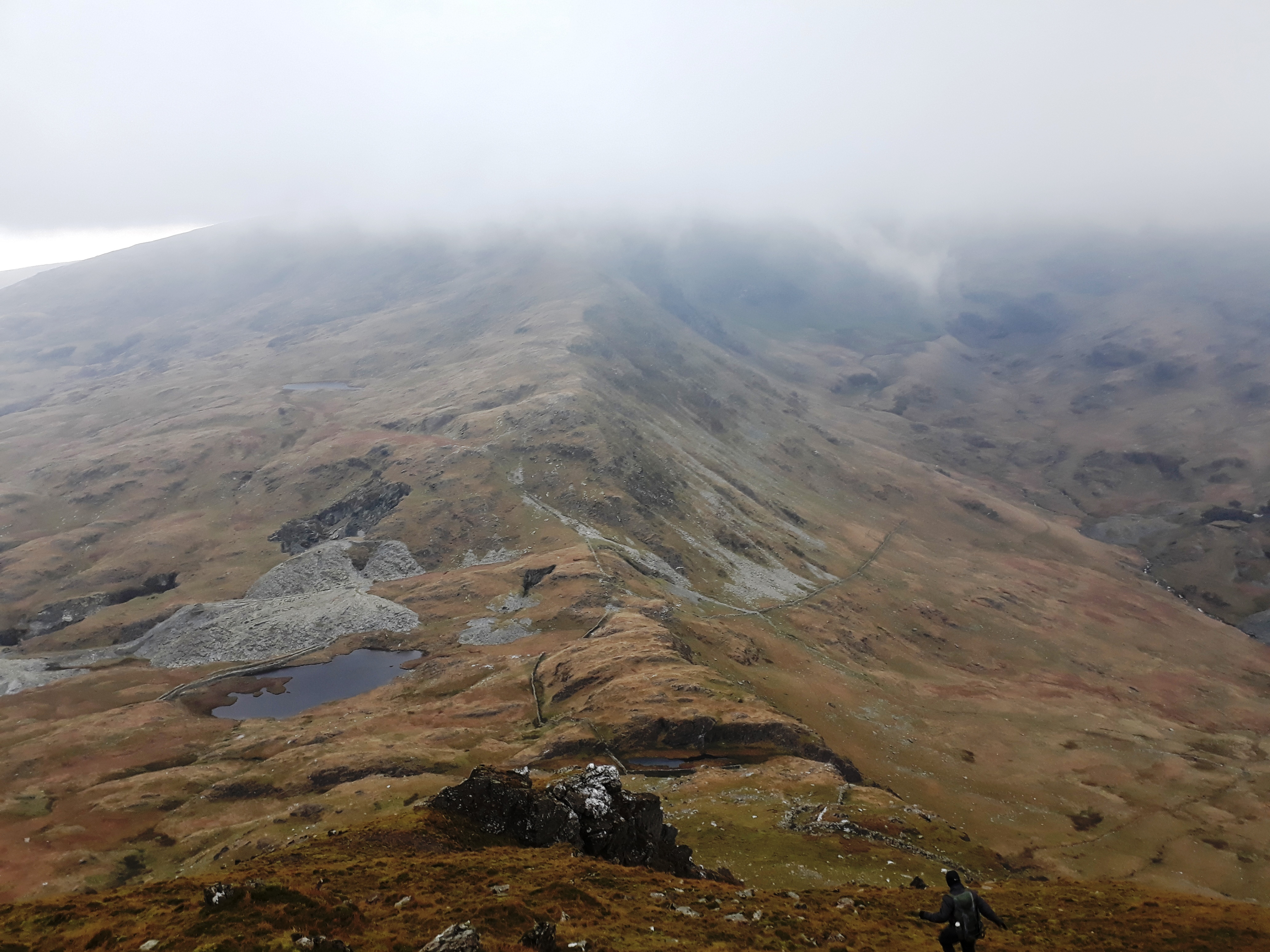 As we started the ascent up to Clogwyn Du on the other side, we met a walker coming down towards us. It was a young German guy who'd camped the preceding night up on the summit of Snowdon! Apparently it was extremely cold, and very windy, so he'd had a somewhat disturbed night - as he said himself, it wasn't a very clever idea to overnight up there, even in a sleeping bag supposedly comfortable down to -10 degrees!

But soon we were into the cloud, and from here on up we sadly could see very little of the Clogwyn Du cliffs, one of the principal reasons for choosing the route

The summit cafe was, of course, closed at this time of year. We stopped briefly for lunch in the shelter of the main doorway; but even here out of the strong breeze, it was pretty cold, so we didn't linger, heading off for Y Lliwedd as soon as we'd finished munching.

It's a steep descent around here, with multiple rough eroded tracks, and in clag it would be very easy to end up going back down the path to Clogwyn Du. We took careful compass bearings, but were still very glad to have the confirmatory back-up of GPS (OS maps on the phone). 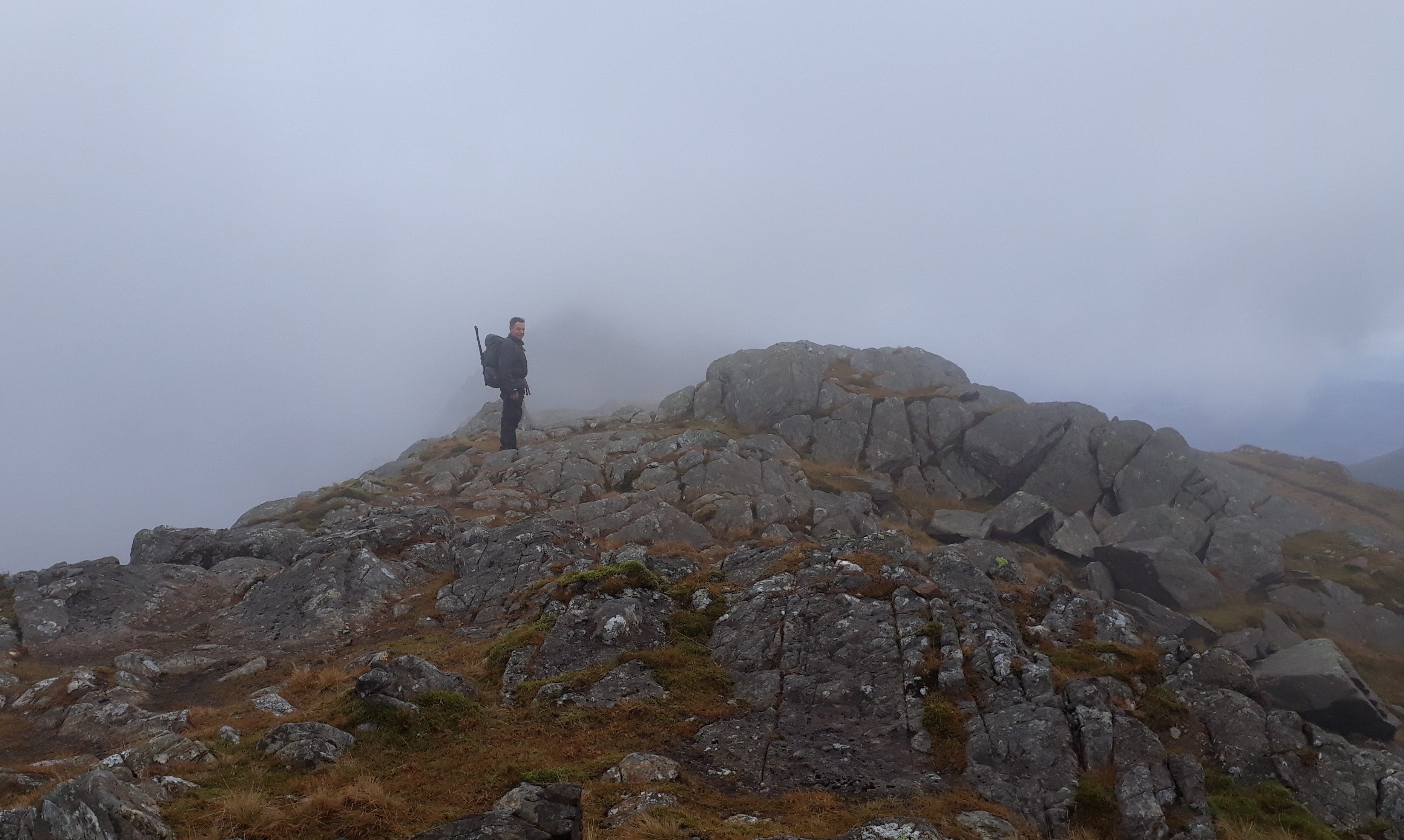 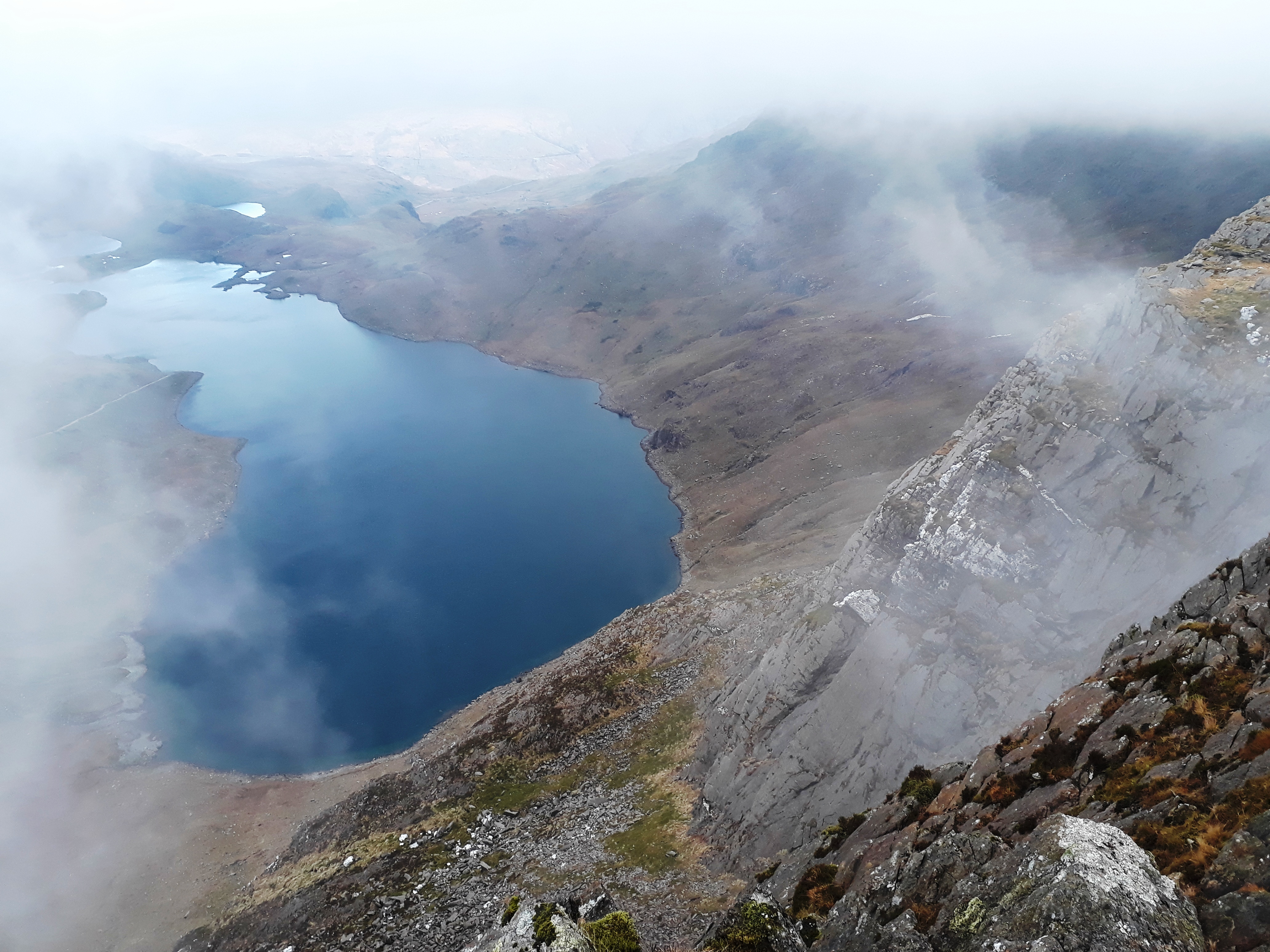 With my slow progress up the steeper slopes, it was getting on a bit by the time we arrived at Y Lliwedd West Peak, so we decided to drop straight back down into Cwm Llan as being the most direct way back to the car. It looked OK on the map, but in fact there was some quite interesting scrambling on the way down...

This view is looking back up the route of our descent. It was quite a bit more challenging than it appears on this pic.

We got back to the cars at about 16.30, and Dr Frank headed straight back home, against all the best medical advice relating to the early replacement of insensibly lost fluids.

I, however, did take medical advice, and replenished minerals and liquids at a nearby establishment of cultural, historical and architectural distinction... 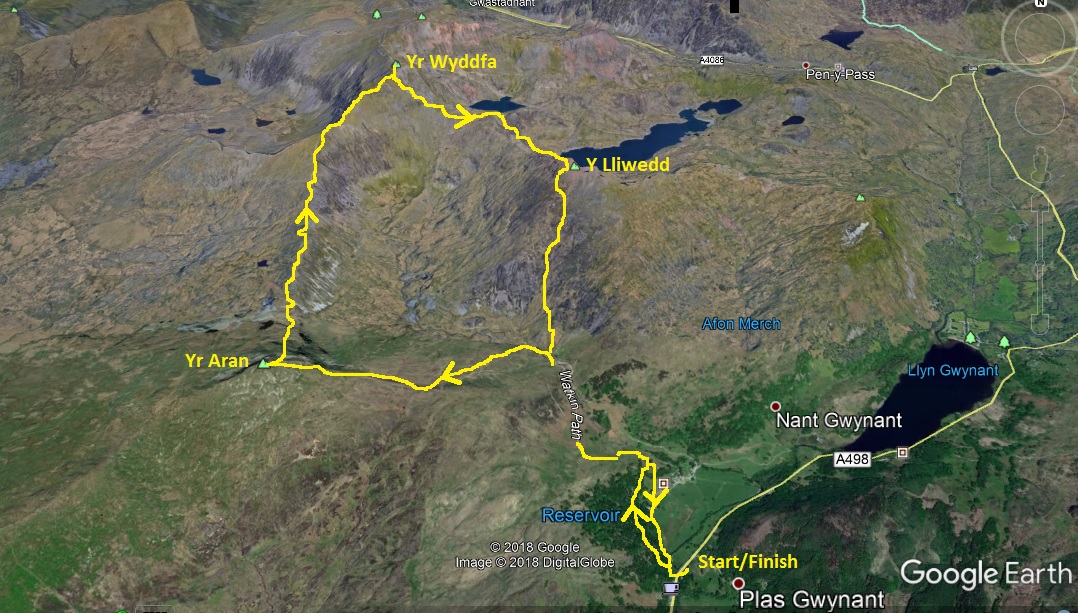 Sorry to hear you've developed AF (atrial fibrillation presumably?). Must have been quite a blow to discover that. Hope it doesn't curtail your activities too much. Looked a great round you did despite the breathlessness; there are so many fine circuits on Snowdon!

Hello AK, yes a fine round, I did similar last summer - in much better weather so I saw it all - you must go back!

All the best with getting through your medical condition and hopefully back to full speed!

yokehead wrote:Hello AK, yes a fine round, I did similar last summer - in much better weather so I saw it all - you must go back!

All the best with getting through your medical condition and hopefully back to full speed!

Thanks for the good wishes. The treatment prognosis is pretty good, though it does have a tendency to come back. We'll see....

I'll be taking my mum, dad and sister with her four-headed family across the North Sea coming April. And I planned a similar route up Snowdon with my nephews. It'll be their second time ever in the mountains, and they and I are really looking forward to it.

Husband has had AF for the last decade or more, but it is the knee rather than that has slowed him down. For all we know, he could have had it all his life: just discovered fortuitously when he went for an appointment for something else. The downside is the bleeding if you are on warfarin. Careful with (a) barbed wire (b) brambles and (c) bike accidents...it can be like walking with the Macbeths. Y Aran was his final mainland Marilyn, so he has fond memories of it for that reason. I managed to snap a low flying plane and get on the BBC forecast with it via weather-watchers so am fond of it too. You normally get pics of helicopters training round there. We did it by itself,yours is quite a round at this time of year. 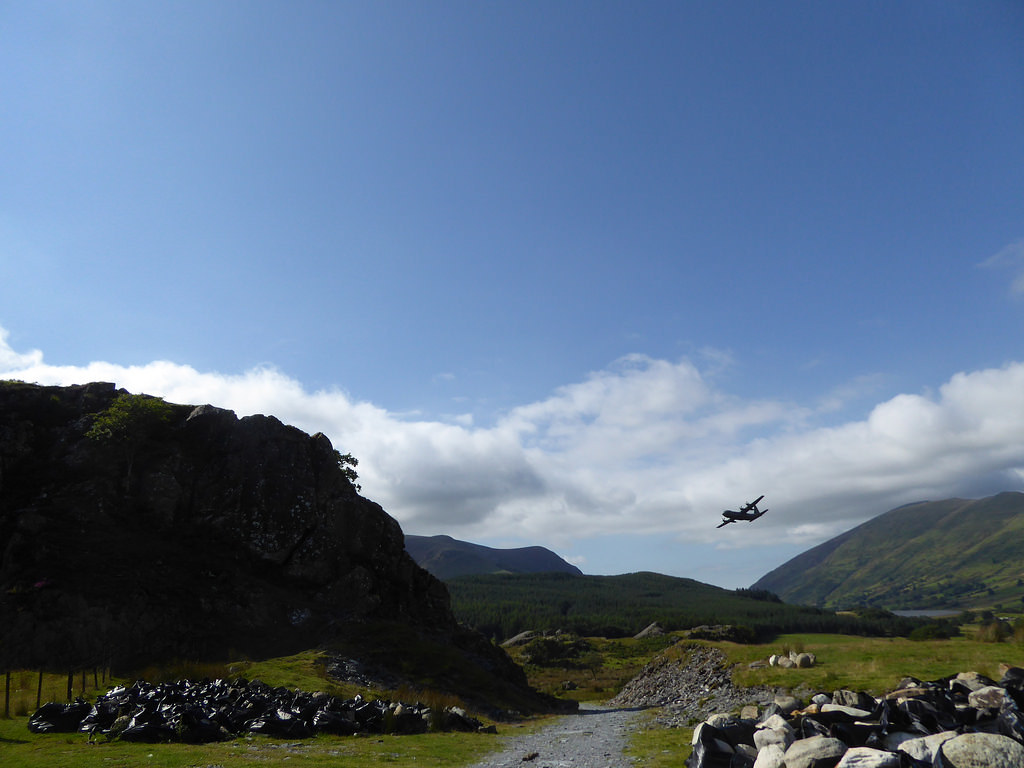