Had been faced with the dilemma of how to fit in Carn a'Mhaim and Ben Macdui? Would have liked to have done Macdui via the northern corries, but looked a long day and the options from the south looked good too. Eventually decided on the Linn of Dee, up Sron Riach, to Macdui, back to Carn a'Mhaim, then out. Easy

The northern corries will wait for another day. 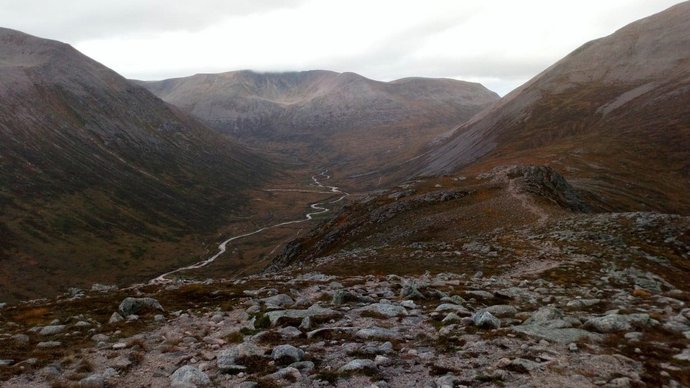 Up the Lairig Ghru, to Braeriach.

As I headed north, things did not look good, due to the low cloud and smir. I did not fancy being on Macdui in anything other than decent vis. Still much low cloud, as I got on the bike at the Linn of Dee, but had to hope it would lift, as forecast had looked a good bit better. Cycled in to Derry Lodge, crossed the bridge and headed along Glen Luibeg. Able to cycle in to the edge of the forest at Luibeg Bridge, without much bother, before ditching the bike in the trees.

There is still a good path up the east side of the Luibeg Burn, before crossing onto the shoulder of Sron Riach. Now the climb really begins ..... and continues

Fortunately, the mist was beginning to thin, offering the occasional glance into Coire Sputan Dearg and back down the glen. Stopped for some grub, then made for the small depression between Stob Coire Sputan Dearg and Macdui, which was stil enshrouded in fog when I got there. Not being too sure of my bearings, I stopped here 15/20 minutes, to let the cloud clear and then made my way to the top of the cliffs above Lochan Uaine. Surprised a wee fella who was making for the same spot, as I emerged from the fog. Poor chap has a less than comfortable night, sleeping in his cold, sweaty, bivvy bag. Sounds like the Bongo 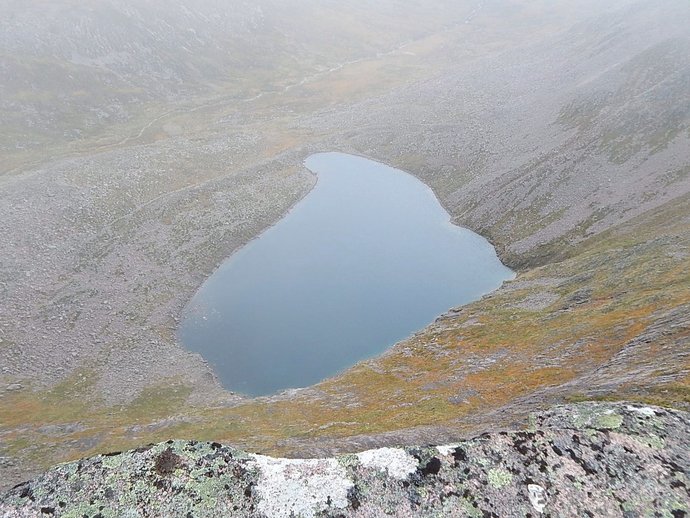 Another Lochan Uanie. This one lies below Stob Coire Sputan Dearg.

After a wee bleather and few pics, made for the summit of Macdui, passing the Sapper's Hut, on the way. Nearly drifted by to the south, but mist cleared, revealing the large summit cairn, not far off. About this time, the other tops and more of Ben Macdui began to emerge, revealing more of the grandeur of the central Cairngorms. Fantastic! Cairn Toul and Sgor an Lochain Uaine - known as the Angel's Peak, begin to emerge from the clag. Misty views down the Lairig Ghru. Ridge to Carn a'Mhaim, the next destination, below. The Devil's Point looks somewhat diminutive from up here.

After a few more photo's, headed back round to the top of the Allt Clach nan Taillear. The track soon petered out on a bewildering array of boulders, which wasn't much fun descending, many of the loose, or unstable. Seemed to take ages to get off these boulders and down to the bealach between Macdui and Carn a'Mhaim, though it is a fair descent! (I think one might be able to follow a better track, if heading up the way.) Across to Coire Bhrochain and Braeriach. The Devil's Point. Beinn Bhrotain beyond.

Thereafter, headed south, up the ridge to Carn a'Mhaim, without any difficulties. Had look at various gullies, dropping down to the Lairig Ghru. Never saw any I would like to descend, though a few of my mates, must have dropped down one of these, into the glen, only a couple of months before. Thankfully, I didn't have to make such a choice Ridge up to Carn a'Mhaim. Looking back down ridge, to the imposing bulk of Ben Macdui. Corrour Bothy at the foot of the Devil's do-dah. Did I mention the proper gaelic name is Bod an Deamhain, "Penis of the Demon?" Back to Macdui. Stob Coire Sputan Dearg, to the right, actually looks higher.

As I was on the summit, could hear, then see, a S&R chopper further up the Lairig Ghru, which appeared to be on a search. Eventually hovered over myself. Wasn't too sure whether to try to gesticulate that I was ok, or that I wasn't aware of any bother, so did no gesticulating at all Another of Macdui and Stob Coire Sputan Dearg.

The hills to the west and east, of the Lairig Ghru.

Beinn Bhrotain, round to Macdui. It was still a bit of a grey day, but took a few selfie's, etc, before descending SE, back down to the lovely pine forest at Luibeg Bridge. Spoke with a nice American couple, before jumping on the bike, making my way back out to the Linn, in just over 6 and three quarter hours, well satisfied with myself. Over to Sron Riath and Coire Sputan Dearg. Looking at me, looking at you! I didn't notice guy in the doorway at the time. Out to Glen Derry. The long walk in, hence why I took the bike :) Later checked out the start point for a hike up Ben Avon and Beinn a'Bhuird, the next day, before parking Bongo in Braemar caravan site, for the night. Enjoyed a few pints before a good sleep and early rise to meet Big Jesper the next day, which as they say, is another story And the Bongo, well hidden away!

You are a brave man going down to Carn a'Mhaim from Macdui even going via the stream. I went up the way not using the stream and those wobbly rocks at times were nerve racking. The stunning views help but not the most pleasurable of experiences.

AHillTooFar wrote:You are a brave man going down to Carn a'Mhaim from Macdui even going via the stream. I went up the way not using the stream and those wobbly rocks at times were nerve racking. The stunning views help but not the most pleasurable of experiences.

Aye, yer right there, AHTF, max concentration required. I wouldn't like to try it with frost/ice/snow on the boulders, that's for sure. Anyway, we live to fight another day!

And a wee bit of vid