Had a call from Steve, asking if I fancied trip north to do a couple and stay in bunkhouse at Kinlochewe? Why not, says me. The plan was to do Slioch one day, then Fionn Bheinn, the next. I don't remember anything remarkable about drive up, though Steve, might say otherwise 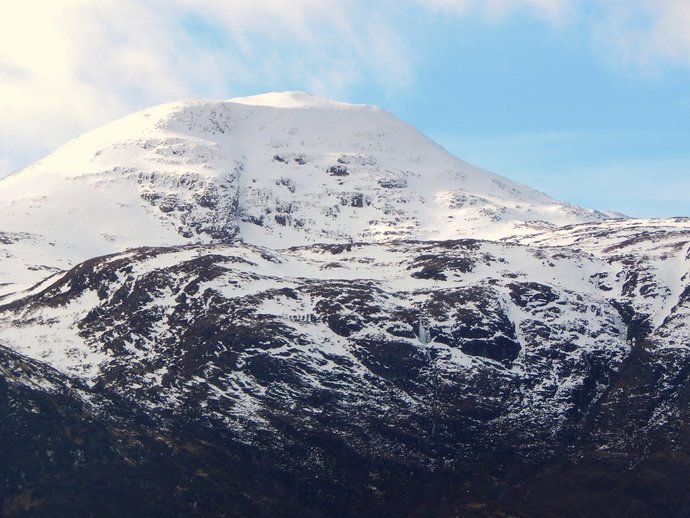 No' sure which one this is, but think it is part of Beinn Eighe?

We quickly dropped off gear and made for the car park at, Incheril. I think it was the back of 12 when we started off, so light might be limited going at my speed! The forecast had looked to clear and the sky looked reasonably promising, though the mist was well down on Slioch. There was plenty snow on surrounding hills, but I felt reassured by my companion's experience. 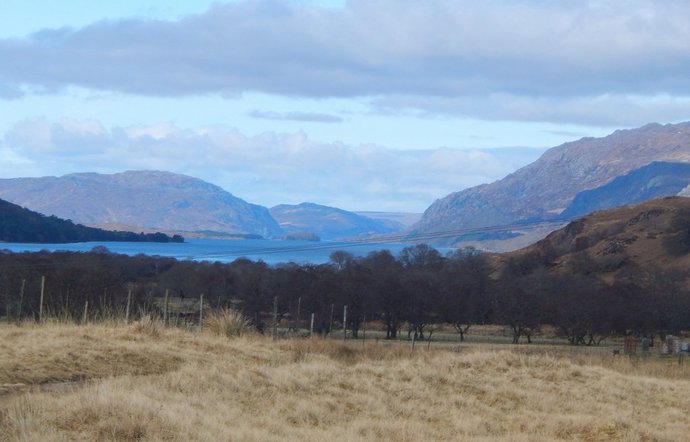 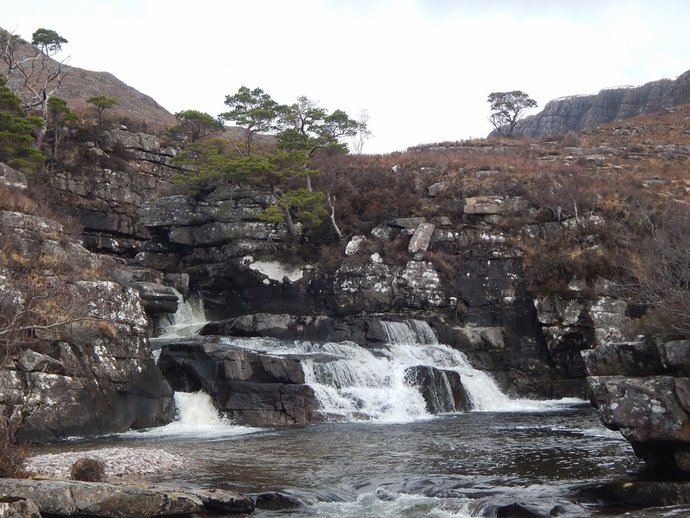 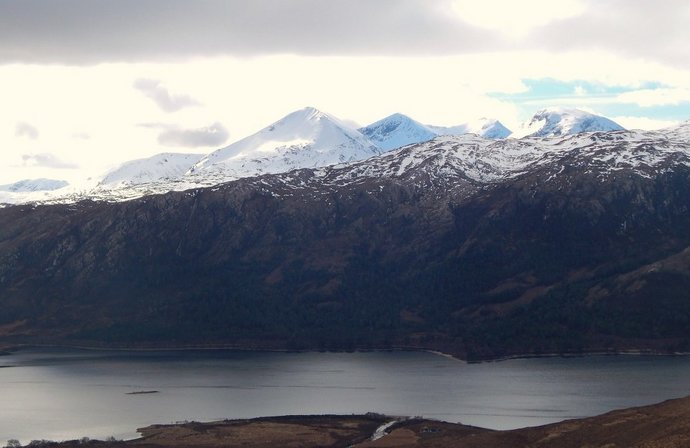 Beinn Eighe, cleared for a spell and gave us false hope it would clear on Slioch, too :( 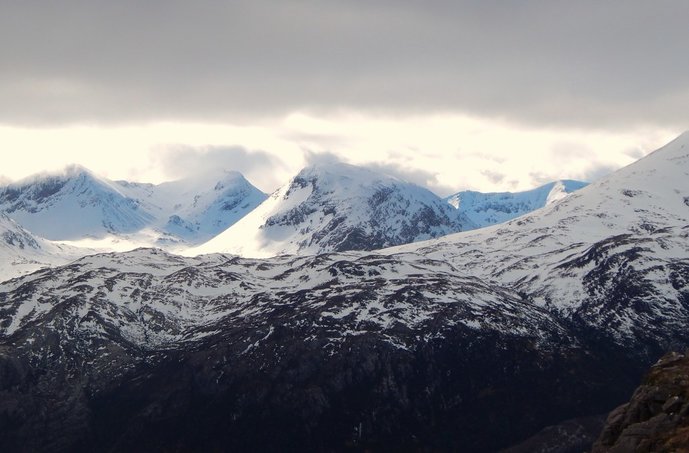 The path through to Loch Maree was nice, though didn't have much time to admire the views. Heading up from the loch, was tough, probably struggling to keep up with Steve. We gradually got into snow as we entered the bowl of Coire na Sleaghaich. Alas, there was no sign of the fog clearing, though we tried to be optimistic. There were several snow filled gullies, but I can't remember which we went up. Quite exciting 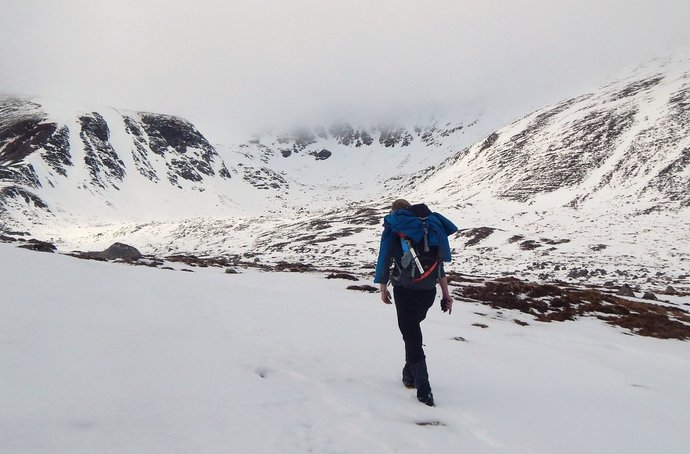 Steve, moving up into the bowl of Coire na Sleaghaich. 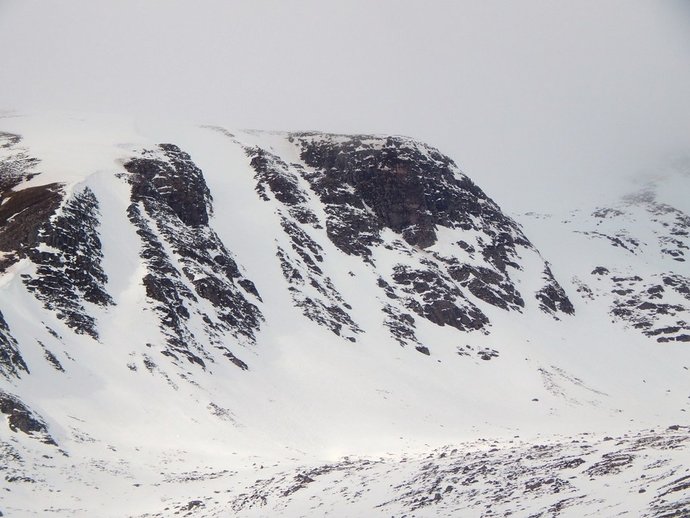 Find a route up here. 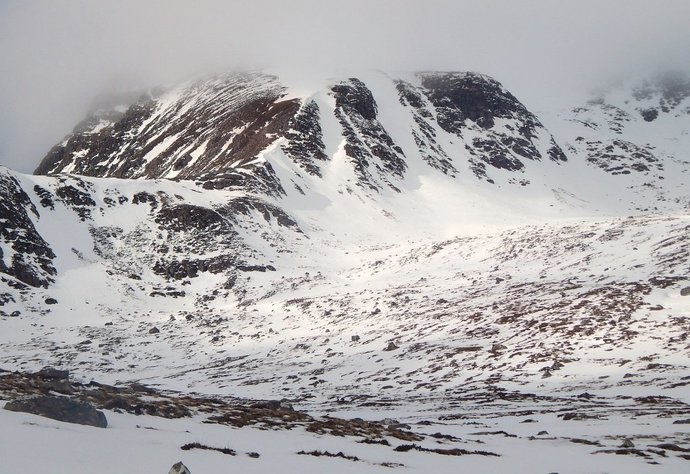 Up one of these gullies. I don't really remember seeing the lochan's? Maybe iced over, covered with snow? I think I managed the stretch up to the 933m spot, a bit better. Maybe Steve, had slowed down for me. By now Steve, was using phone, just to check on right route. We reached trig point and I thought that was us, but alas, not. It is marginally lower than the summit, so off we went, carefully searching for the top, which was lost in the mist, but only five minutes away. I think we were about 3.5 hrs to the top. 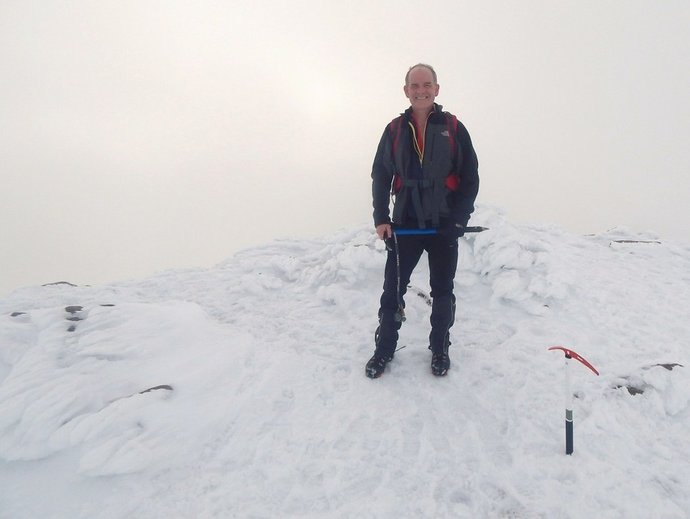 Think this is at trig point. 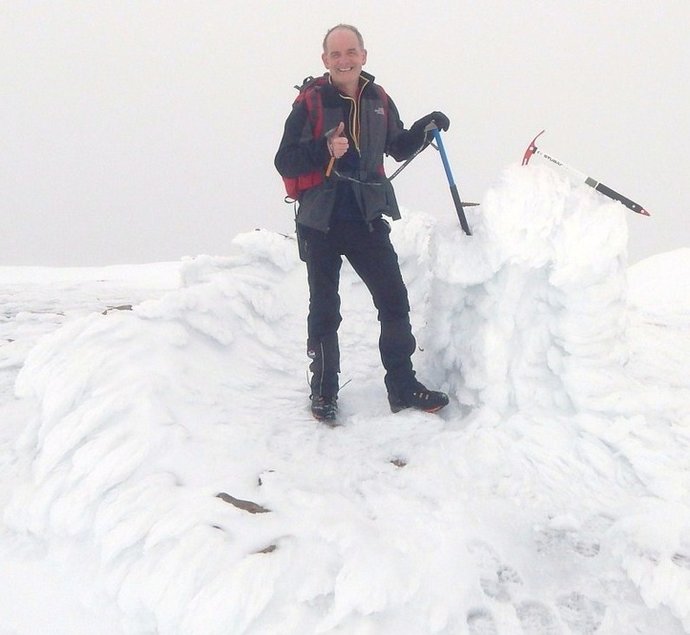 Trig point. Not to be mistaken for true summit, three feet higher :) 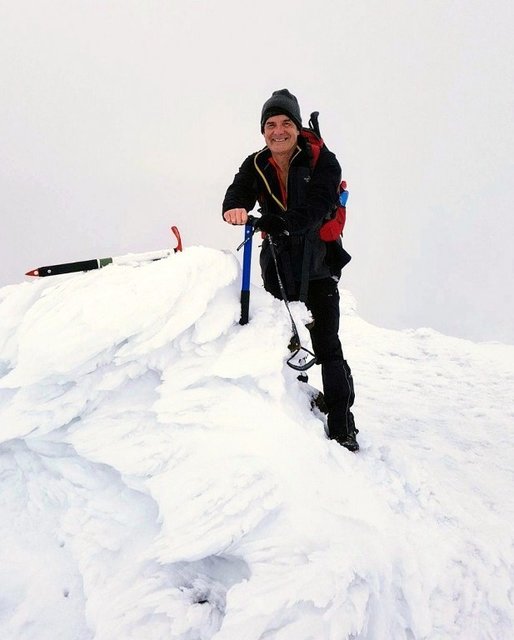 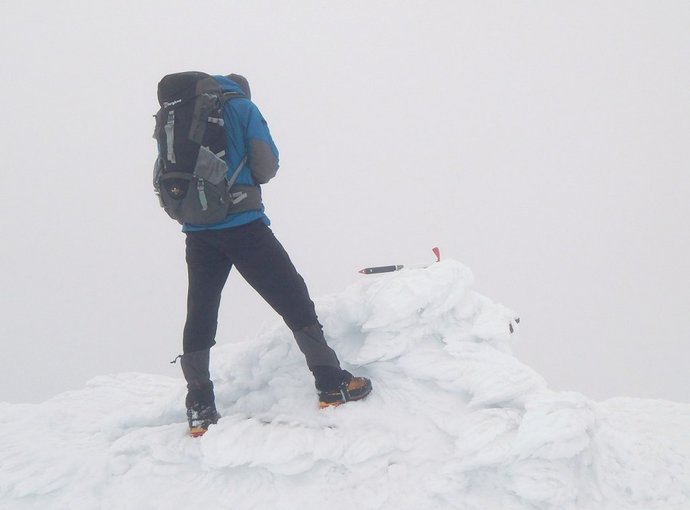 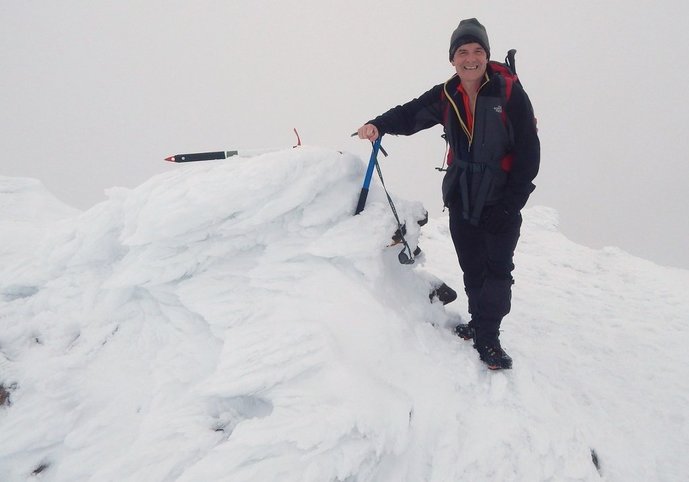 Contemplated whether to go down the east ridge, but Steve wisely thought otherwise. A few photo's then we were soon on our way down. Navigation was still tricky, but soon met up with some folk we had passed coming down. The drop back into the corrie seemed quite steep too. Glad to have the ice axe handy. 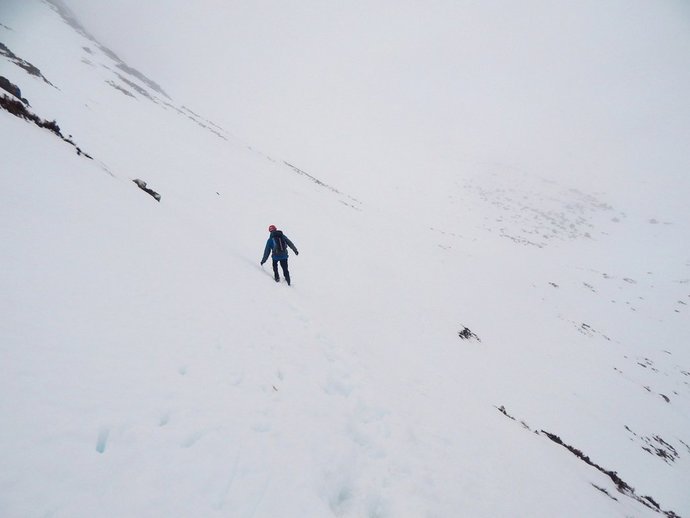 Bit tricky on some of the descent. 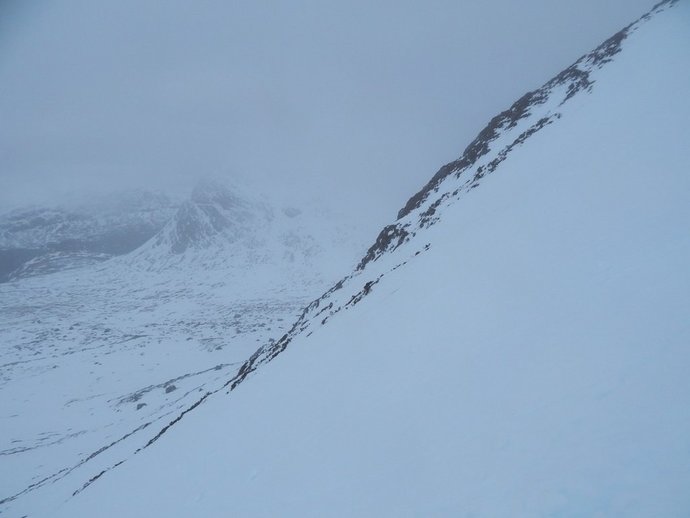 Passed another group lower down, before the loch side, then went back along the path at a good lick. It would have been nice to have done it in the six hours, but we were five minutes over that, for which I take full credit. 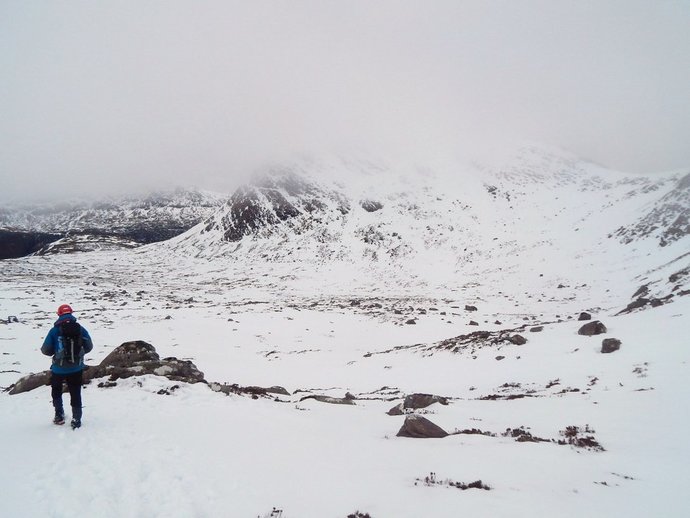 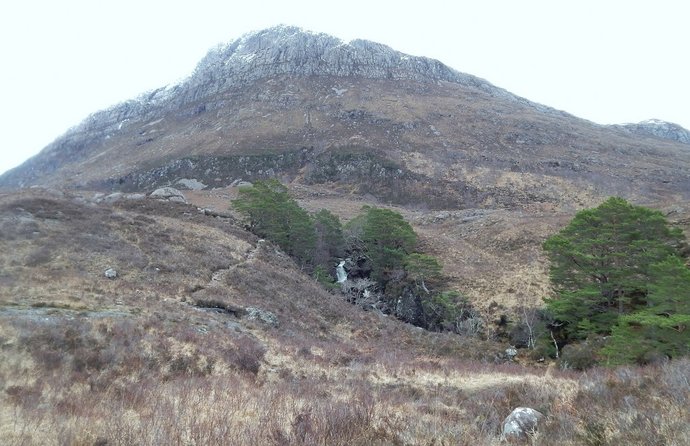 Back to the falls. 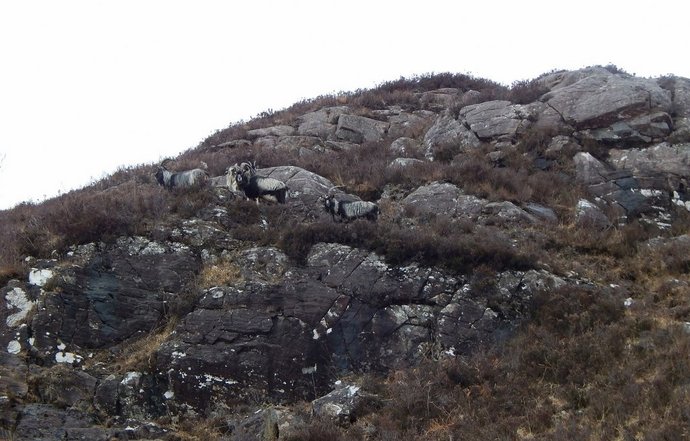 There's always someone playing the goat :)

Back to the bunkhouse, where had the place to ourselves, apart from a man and woman who were ice climbing in the area and had been there all week. Steve made T. Some cook! (And he supplied the vino!

) I washed the dishes, equally expertly. Slept fairly well then had a stroll around the village, before making for Fionn Bheinn the next day, hoping for clearer skies to come.
Well, never managed to keep it shorter afterall 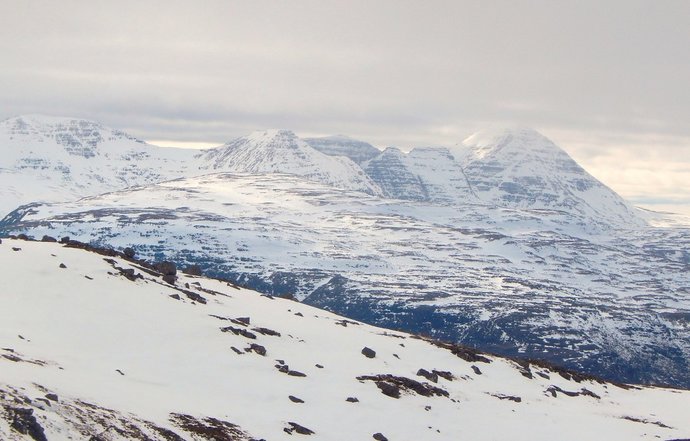 Again, no' sure, maybe Alligin? 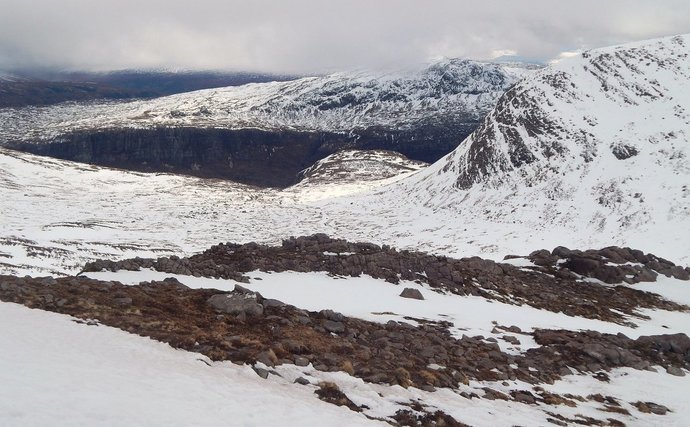 View back out the corrie. 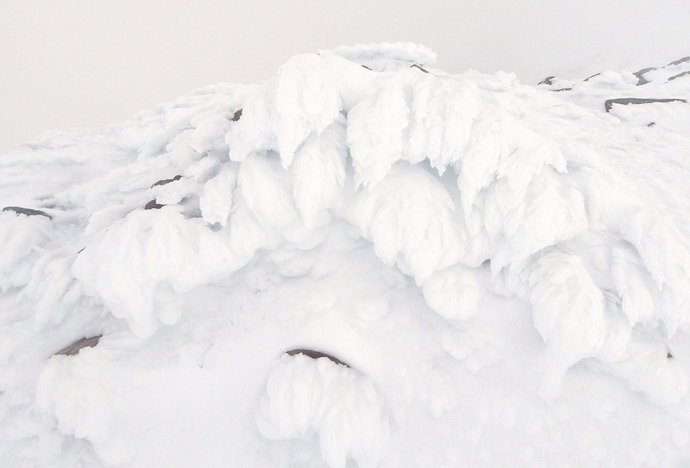 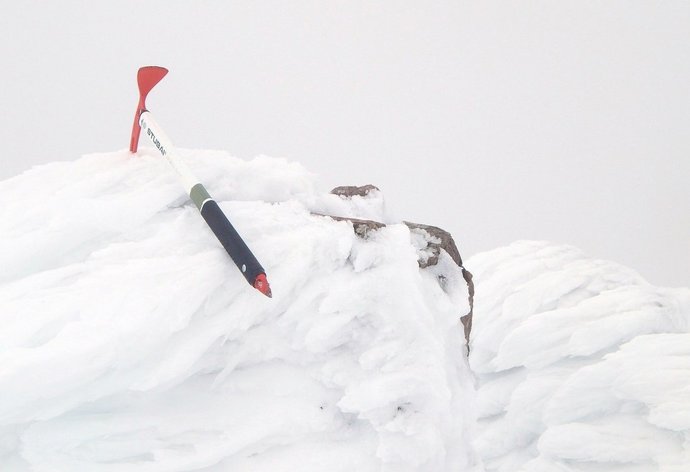