Kinlochewe Day 2 - Fionn Bheinn, lives up to its name.

Kinlochewe Day 2 - Fionn Bheinn, lives up to its name.


Spent the night at Kinlochewe Bunkouse, having done Slioch the day before. After a look round the village we headed back along the road to Achnasheen, hopeful of a brighter day, than the previous. Alas, it didn't look likely as the lower slopes were shrouded in cloud, like yesterday, but like yesterday, the forecast was promising enough. Nice view of Sgurr Dubh, a Corbett, before heading from Kinlochewe, for Achnasheen. Brooding looking Slioch, the day after. Mist still hanging around, but maybe cleared. Unfortunately, not able to go back up to see if views any better :)

Met a guy at the start, who was asking about the route up. Hadn't a map, but Steve offered to give him a screenshot or, two from phone to provide a little guidance, but he kindly declined and said he would follow our tracks up. Steve, a bit dubious about his tactics Out of the grey and into the blue. Yahoo! A fleeting glimpse back, through the cloud.

As usual, Steve kept up a brisk pace, but I felt better able to keep company today, perhaps helped by the spongy terrain and poor vis, which kept Steve, more preoccupied than he might otherwise be. One, or two wee adjustments kept us heading up for the firmer ground on Creagan na Laogh. The fog remained very thick and the snow increasingly deep, but not too steep, as we headed for the main ridge of Fionn Bheinn. About halfway up this slope, the sun began to gradually shine through and then, not quite suddenly, but certainly very quickly, we emerged into blue skies, above the fog. Amazingly beautiful views for a while. By now the snow on the ridge was turning firmer, but not so icy as to bring crampons, or ice axe into action. We made it to the summit trig point, in about two hours, or so, but the cloud didn't stay away long, obscuring views of the other Fannich's, and most other hills. Steve, on the ridge, making for the top. 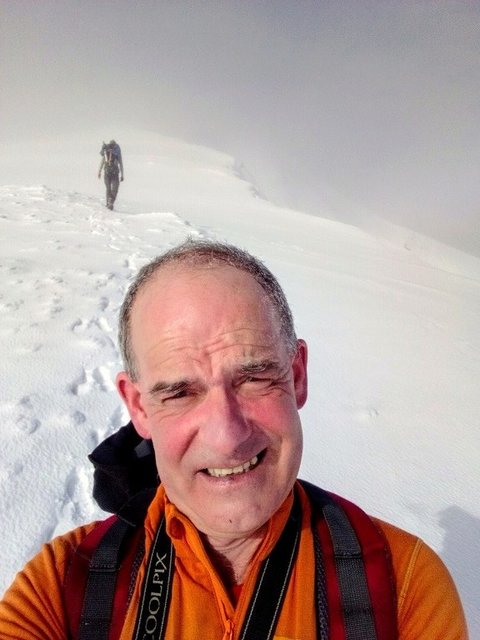 Steve, doesn't realise us short folk like to take a lot of pics :)

No signs of a raven, attired in plaid and bonnet, as predicted by the Brahan Seer, so there was no sacrifice of human blood on Fionn Bheinn, either, thankfully and after a few photo's, we made our way down, pretty much following our own tracks, much of the way. It was a bit of a releif to see the stranger, making his way onto the ridge, having found his way, though from an unusual angle and not by following our tracks. A wise man, perhaps Some nice cornicing on Tom Mor. The remainder of way down was pretty uneventful, other than what seemed a plethora of boggy bits and snow holes, most of which Steve, managed to find first

Sometimes being faster isn't always a benefit! Made it down just over the three and a half hours, feeling happy and welll rewarded for our efforts over the last couple of days. 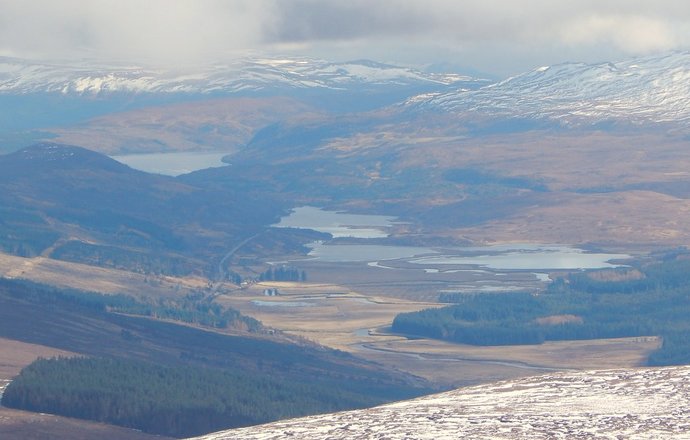 Tracks down from the ridge. Overlooking Achnasheen, on way down. Well done, Steve! I could have fallen in that hole, but for you :) Meantime,Steve braced himself for the journey back down the A82 Re: Kinlochewe Day 2 - Fionn Bheinn, lives up to its name.

And a wee bit of heavy breathing