Not so much a short day as a much shortened day for walking due to the amount of driving necessary to get to and link three easy hills. With an intent to start early from just west of Edinburgh it was about 7:15 as I set off to find the rush hour was well under way. Fortunately this time I was heading in the opposite direction and had a uncrowded two hour drive to get to the very single-tracked road to my chosen parking spot for hill number one - Cairn Hill.

Jaywizz had told me of the passing-place-free stretch of road that led to where she parked - the junction where the track heads off to Kirkbride. I 'drove' along it in Streetview and spotted a suitable place not long after the railway bridge where at the expense of a longer walk I could leave the car and avoid any problems meeting vehicles on the next half-mile of narrow road. My best-laid plans, however, were foiled when I found the fencing had been rearranged to leave only a passing place instead of the large expanse of gravel that appears in the 2010 Google image. So my walk immediately shortened by about a mile and my fingers were firmly crossed as I drove up the thankfully deserted road to park at the Kirkbride junction. Parking at the start of the track to Kirkbride

From there I had dry weather all the way to the summit and back though showers could be seen in the distance and most hills were cloud-capped. From near the car I climbed the steep grassy bank to reach the track leading past a silent Kirkbride, though smoke was issuing from a chimney. At Kirkbridehill Plantation there was a choice. The farm gate leads into a fenced area with feeding and watering stations (for game birds I guess) while the stile to the right takes you over the wall but still outside the fence. This can be followed through the trees and past the fenced area to eventually emerge through another gate onto the open hillside. Follow the fence a bit further then turn right to - - - the path through the trees Looking back at the exit from the forest

There was an open gate at the far end of the enclosed area so both routes were possible. 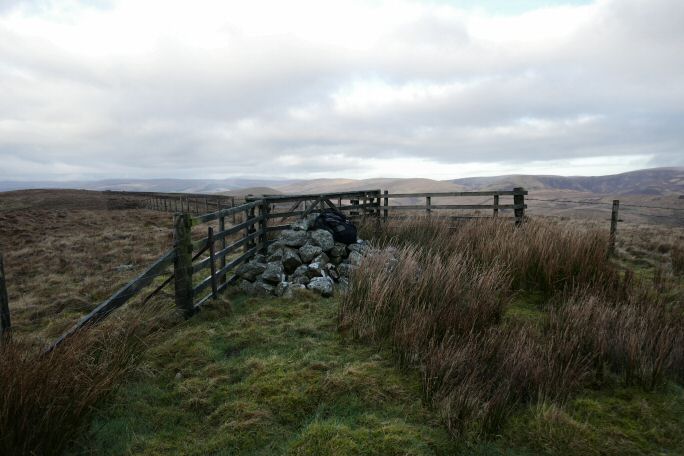 On my way down I first heard geese? and then a cockerel as I neared Kirkbride, then a cacophony of barking as a pack of seven dogs ran round to greet me from the other side of the fence. Their owner followed in the distance shouting a string of commands at them to calm down. They were possibly quite friendly and pleased to see me, but I shouted a few words of apology to the lady and continued walking grateful for the intervening fence and cattle grid. As I reached my car a shower started and a landrover drove up the track. Good timing on my part since if I'd been a few minutes earlier I'd have met it on the road, and if I'd been later I'd have been rained upon.

After a 3/4 hour drive I followed Weaselmaster's advice by parking in the narrow layby near Pennyvenie Bridge (NS 4990 0689). If you choose the right spot to head up the bank you will find a stile over the fence to join the track past the ponds. I didn't! Looking at the stile I didn't find until after I'd climbed the fence. The car is just the other side of it! Walk along the track past these pools From there the track leads easily up to a T-junction where I headed straight on over a tussocky, marshy area up to a fence. This took me to the bank above the Pennyvenie Burn where narrow paths led on to later cross the burn and then head up to the large cairn on Benbeoch's summit. Looking NE over the now closed opencast workings from the summit

Visibility was better here than it had been on Cairn Hill, but showers could be seen approaching. On the way back I walked along the ridge to look down on Fox Park, an area of boulders surrounded by a wall. Fox Park from the summit ridge

The whole ridge is an SSSI because of the geology. The volcanic sill there is where the rock 'kylite' was first found and described. There is nothing in the documentation about Fox Park. Another WH report claims it was walled off for safety reasons. This time a light shower joined me for the last 200m as I neared the car.

Another 40 minute drive took me to Nick of the Balloch and a layby a short distance past a track contouring up Rowantree Hill (NX 3485 9238). This time a shower started as I set off. A steep first few metres reached the track which took me south around the hill to a double fence. In preference to an ATV track I started following the fence uphill. By keeping close to it and therefore below the crest of the hill, I hoped I would be partly sheltered from the wind and rain. Almost all the ascent was over in the first 800m and I soon joined the ATV track that I'd ignored earlier and followed it most of the way to the trig point until it faded as it crossed a boggier area. 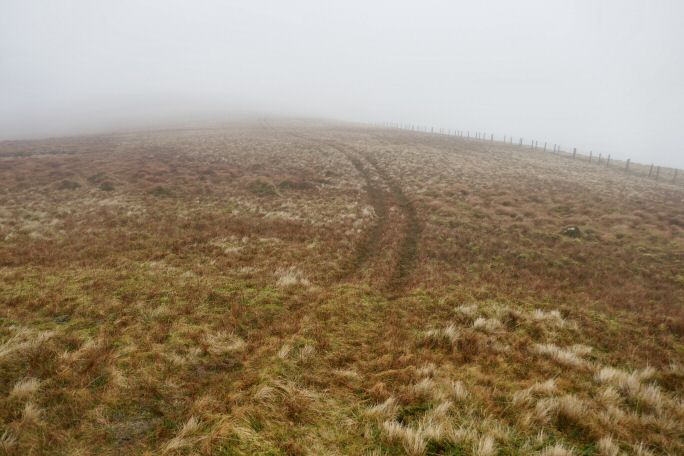 Looking back at the ATV track as I neared the summit Only a short stop at the trig point.

On the way back the rain had stopped and I splashed along the ATV track almost all the way. Back at the car it was 3:22pm and about one hour before sunset. Enough time to drive back onto wider roads before dark and to enjoy another two and a third hours of driving mostly on dual carriageway and motorway through the middle of rush hour Glasgow and along the M8. It had been another non-wintry winter's day with not a sign of snow or ice on any of the surrounding hills, though I admit many were hidden by cloud.