I drafted this report the week after the walk and it's taken until now to finish it. Read on for a reminder of balmy summer days...

On the advice of certain WH contributors, we decided to get acquainted with Ben Hutig before any bulldozers moved in. It was a breezy day so probably just as well to stick to a low hill.

Starting just outside West Strathan, we headed south and joined a track heading up across the moor. 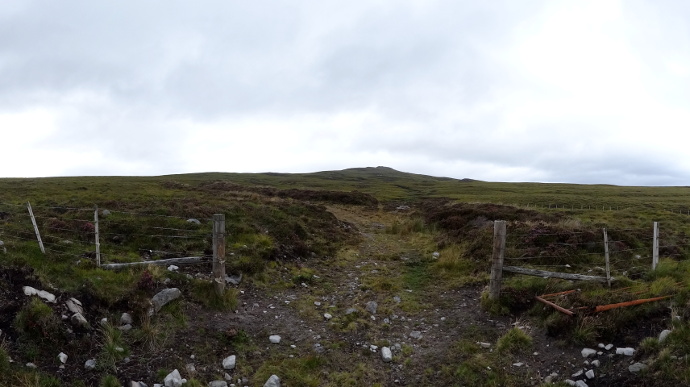 On the map this leads into a large enclosure with no other exit, but the fence was low and someone had helpfully cut a hole in the far corner.

Off the track the ground was dry and tussocky, and remained so for most of the walk. The place was a haven for hairy caterpillars. And the odd frog. 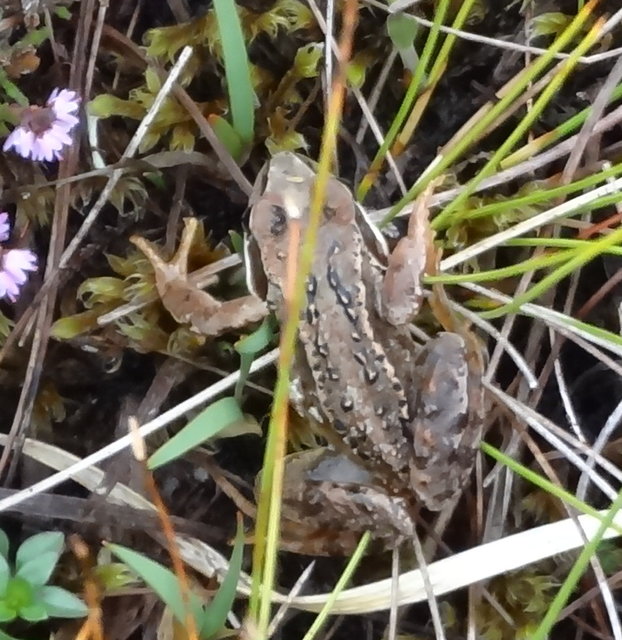 The first peak had some impressive crags that provided some shelter from the wind. Windbreak at the first stop

There were excellent views of the northern landscape... SE, Scaraben to the left And some more islands in the west.

...but Ben Loyal took the prize for the Most Moody Mountain. I've seen some impressive summit cairns in my time, 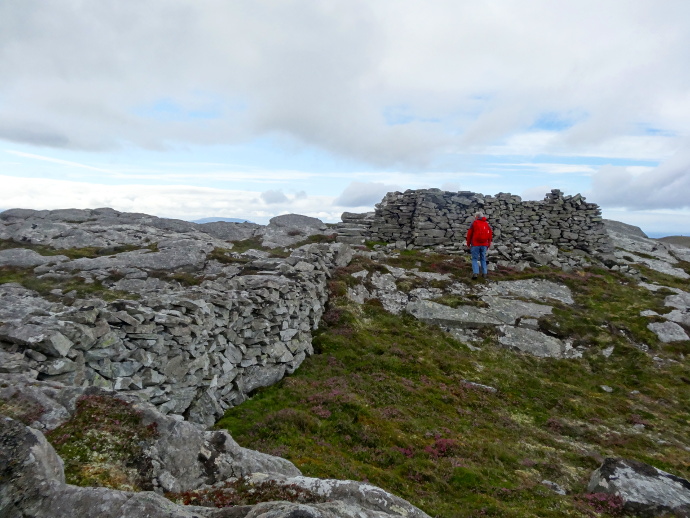 but this was my first walled summit garden. We followed the ridge north, getting blasted all the way by the unremitting westerly wind. It felt like a strong Caithness gale, so around 60mph. I'm thinking about adding a single earplug to my list of standard hill equipment. At the next high point was a nice cairn, this one with more of a round vibe. Here my hat was blown off my head - or should I say it was blasted off? I put it in my bag soon after. This cairn's purpose appears to be to aid the local fruit growers. Even the heather was sheltering from the wind.

After some deliberation we chose to brave the increasing wind and follow the ridge to the coast.

One of the craggy points along the ridge overlooked a wide, flat area - the flattest I'd seen all day. I'd been wondering exactly where the mini-spaceport would be put, and it occurred to me that if I was going to build a spaceport on this little peninsula, it might be there. Even as that ran through my head I thought that if I were planning to build a spaceport on such a windswept bog, I'd have said head examined.

(FWIW I'm pretty sure the site is actually further south.)

We followed the clifftop fence around the leeward side of the headland. Outside the fence the land curved abruptly down to nothingness. 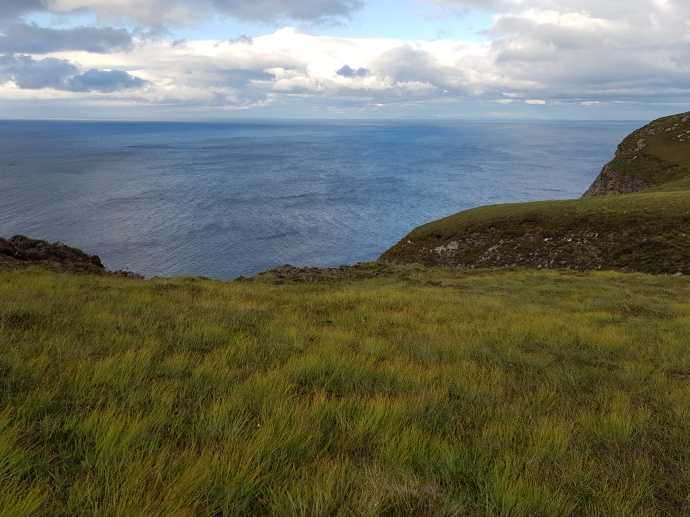 There were several burns on the way but they had clear tracks running to and from passable crossings. One of the gorges was well supplied with waterfalls. I love it when I go hill walking and find myself in a completely different environment, it's like being awarded a bonus walk. 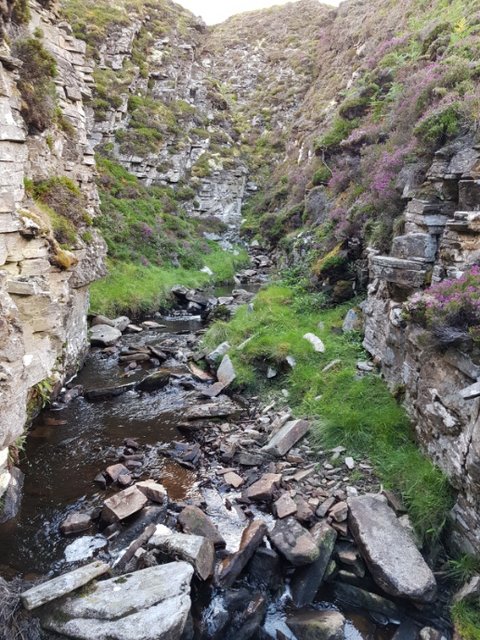 Looking up one side

Several ups and downs later we escaped the remaining slopes by descending to Achininver Beach, one of the many north coast beaches that would be heaving with people if it were a bit further south. In Caithness, this type of land feature is called "'e bay". Apparently all kinds of things wash up there.

The tide was most of the way out, exposing a sand bar and a wide choice of routes. After making use of the foot-cooling and shoe-washing facilities, and admiring the headgear sported by some of the locals, A limpet with a wig

The entire trip took about eight and a half hours and covered ten miles, but we both felt like we'd done about three times that distance. The going wasn't actually bad but it was mostly trackless and decidedly lumpy. And did I mention the wind? We did Ben Hope the next day and that giant staircase seemed much easier. Hutig was definitely worth it though - it was an excellent walk with an even better outlook. Anyone who thinks Munros are the only hills worth bothering with can, well, take a hike.

20181212-3.gpx Open full screen  NB: Walkhighlands is not responsible for the accuracy of gpx files in users posts

You probably know that your first walled garden summit was the remains of an original O/S camp where they stayed for weeks at a time. We just went up and back the same way, so really interesting to see what happens on the other side. I suppose the wind was whipping up too much spray for you to be able to spy Orkney. Depresses me to think it is all going to be built up round there.

Thanks for the replies, glad you both liked it.

I had read on WH about the surveyors' camp but was surprised at how big it was and still is, I take it the other walls to the southeast were also part of it? I've just looked at an aerial photo on Bing and it looks like there's another wall and enclosure further down the gully that I didn't even notice on the day. I suppose if they were up there for weeks with a load of equipment it would make sense.

Now I'm trying to remember if we spotted Orkney at all. I think that's Dunnet Head on the horizon in one of the pictures, so general visibility was good enough, but the islands further out to sea were obscured.

. I had planned a very similar route taking in the coast as a stop-off from a cycle tour a couple of years ago. I didn't even do the cycling bit in the end, so still haven't been up there. Glad to see that it is every bit as interesting as I hoped it would be