Taking the Mhic - A wee lesson on Mhic Chasgaig.

Taking the Mhic - A wee lesson on Mhic Chasgaig.


Wanted a decent hike, especially as the snow was out, but so was the ice, so I had my apprehensions about doing this one. Was still dark as I drove down Glen Etive, but the light was coming in by the time I tied burst lace in one of my boots. One of my first thoughts was about how the frost would save any boggy bits. Wrong

Immediately went in one, knee deep

Despite that, much of track was frozen and icy on rocks, requiring max concentration. Heading in. Aonach Mor and Meall Garbh ahead, but not my target. 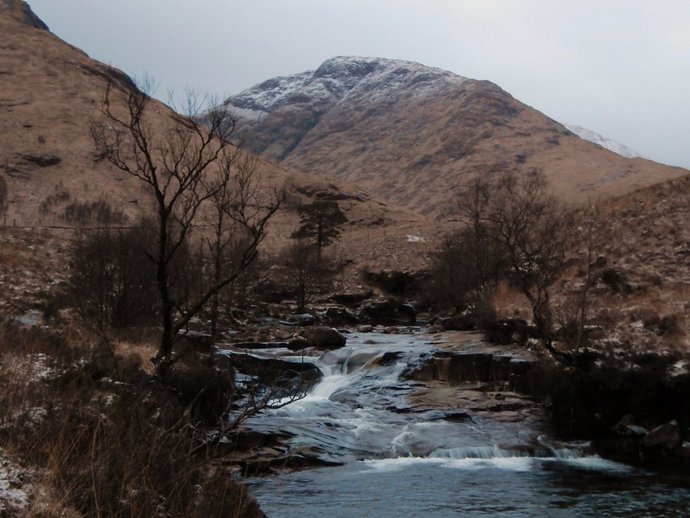 Nice falls and pools on the Alltchaorunn.

The pools and falls on the Alltchaorunn, were beautiful even in the semi daylight, but my photo's weren't up to much. Soon came to the plank bridge, which had a nice dusting of snow and ice on it. It is a bit dilapidated looking and the handwire not a great assistance, but made it over without mishap. 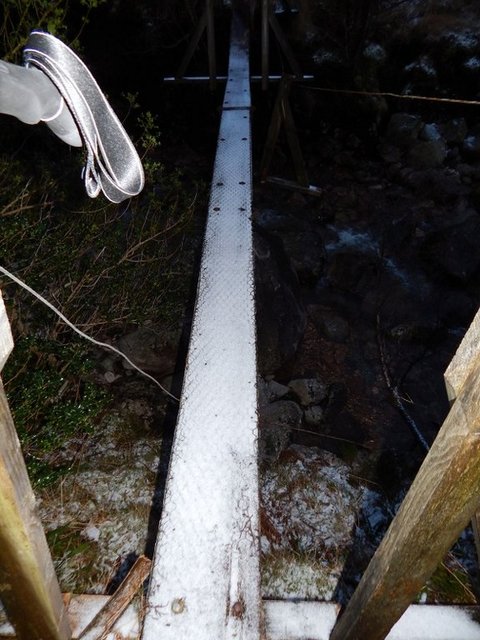 This could be fun! 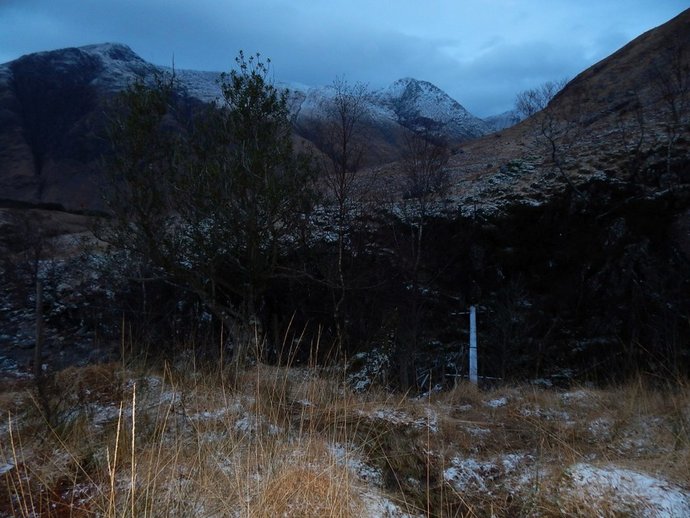 I was mulling over which way to do the main climb and still prevaricating, when I came to "make your mind up time," halfway along the Ghiuibhasan gorge, at the big gully which leads up into Coire Aiteil. It looked steep, but wasn't too much signs of snow or, ice low down, so decided to go for it and probably come back down the bealach on the far side. Crossing the icy stones mid stream was great fun, but I evaded a dooking Climbing now, looking down at the Allt Coire Ghiubhasan and over to Stob Dubh. It was steep, but any ice or, snow was easily evaded and I must have been sheltered from the breeze, as I fair sweated my way up. Nothing to do with the excesses of the festive season!

Only higher up did the wind begin to increase. It was forecast to get a bit duller mid morning, but as I got onto the easier gradient, the wind really picked up in speed as a nasty squall came in, driving snow harshly across my face. It's coming! Little did I know how severe the squall was to be.

Didn't take long to freeze my hands and head, as I belatedly took action to don more gear, just as I made it to the summit. I don't think I have felt it colder. MWIS had suggested it might get to -20C windchill and I wouldn't argue. Had to use the tip of my new walking pole - thanks kiddo's/Santa

- to switch on my camera, though there were virtually none of the hoped for views. Dashed again, with immaculate timing! Someone at the summit, fallen asleep :) Looking down the NNE ridge. Didn't fancy look of it today. Again, it was time to decide on next move. Getting down quickly seemed to make sense and opted for the bealach above Coire Odhar. Certainly made quick progress, but as I approached, could see a lot of ice around the edge and I was also surprised at the steepness of the drop down to the Allt Coire Odhar. What also looked a problem was a number of steep, frozen streams which divided the hillside into various strips, perhaps about half a dozen or, so. They looked particularly difficult to cross, as the widened lower down, near the bottom of the slope, so I opted to cross them higher up. Steeper descent than it looks. A look back up to the bealach, where I had a few tricky moments coming down, crossing icy streams. Defo cross them higher, than lower down! One of these icy "streams."

Despite the steepness, it generally wasn't too tricky making a downward angled traverse, aside from one iced-over stream, which I negotiated on hands and knees. (I had the ice axe and crampons, but didn't feel the need to resort to them.) By now I was fully convinced the easier and safer option would have been to have went down the way I went up. Had the visibility been poor, I might not have seen the extent of ice lower down, which could have caused problems. The knob of An Grianan and Stob Coire Sgreamhach, begins to show as vis improves markedly. Down the Allt Coire Ghiubhasan, to the Dalness Chasm and Bidean hills. A look back at ascent route. In retrospect, should have come back this way, too :)

Still had a couple of tricky river crossings on icy boulders to do, but kept the feet dry for the enjoyable walk back down the Allt Coire Ghiubhasan, as the sky brightened and better views of surrounding hills began to appear. Crossing the plank was no less a challenge in full daylight, as the frost and ice remained much as on the way in. Spent a bit of time taking pics of the many pools and falls above Alltchaorunn, before making it back to the car just over the four and a half hours. I remember finding the bealach coming off Ben Lui a bit tricky to negotiate one day, due to snow/ice and this one was a bit similar, too. I think it was wise to negotiate the streams higher up, but if I had to give advice, it would be to consider doing the ascent/descent by the way I went up, if it is freezing. Would be rude not too!