Tarken it easy on the Loch Earn Grahams

Tarken it easy on the Loch Earn Grahams

Grahams included on this walk: Creag Each, Creag Ruadh


I just had to get out this weekend. Having not been out the previous couple of weekends and having spent the best part of the previous week shovelling snow and hacking down icicles, cabin fever had reached dangerous levels and apart from anything else, not being on the hills meant potentially becoming embroiled in some Christmas shopping related escapade, which really wouldn't have helped the mood one little bit.

Kevsbald had decided to head to Arrochar (our proposed Glen Spean Munroing trip having been shelved during the week at the height of the snow chaos) and CurlyWurly was off the road (and the hills) with snow related car issues. So it was just me .... and the dog. My wife had expressed reservations during the week but they had been countered by our cancellation of the Glen Spean gig and the downscaling of our plans to a more southerly location and lower altitude. She was unhappy when she heard on Friday evening that I was going solo, but I promised to behave and take things easy.

So I set off for Loch Earn and the Glen Tarken Grahams fully prepared for a day of walking in crampons and ice axe action, but I was to be shocked and surprised at how fast and how far the snow had receded in Glen Tarken and on the two Grahams on either side of the glen.

I had wanted to do these two hills for a long time - not so much the anticipation of what they would have to offer, more just the fact that I had driven past them so many times en route to other more exciting hills and wanted to get to know them.

After a quick stop just beyond Gilmerton for a sunrise shot across Strathearn, and a further stop in Crieff for petrol and some supplies, I pulled into the lay-by by the farm at the foot of Glen Tarken. 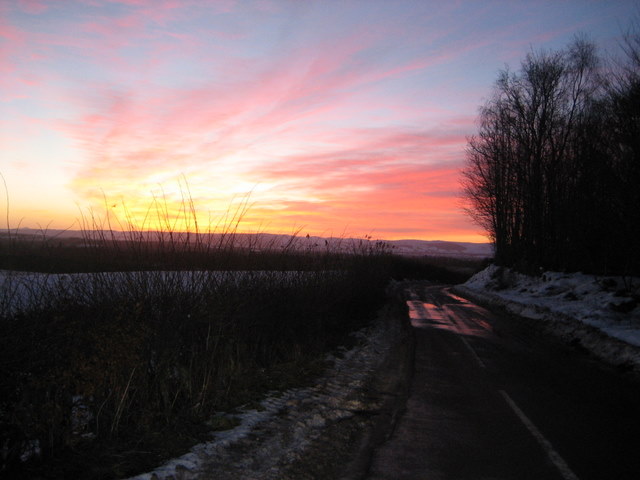 Creag Each across Loch Earn from St Fillans

I had a quick cuppa from the flask before getting togged up and heading through the farm gate by the Public Footpath sign. Immediately I was glad for all the legwear I had on (gaiters, waterproof overtrousers e.t.c.) as I stepped into a quagmire which seemed to comprise in roughly equal measure of mud and cow crap. The source of all the cow crap was soon obvious as I passed a large group of bovine beasts gathered around their feeding trough and giving Lucy the evil eye as we passed. I just kept her close at heel (ready to let go of the lead in a split second if necessary) and kept my gaze down as I marched purposefully past giving them as wide a berth as possible. Back down to Loch Earn and St Fillans

That was really about as risky as this walk got! We continued unthreatened up past the buildings at the dog-leg bend in the track and into Glen Tarken, before striking off to the left onto the south eastern slopes of Creag Each. From this point Creag Ruadh is an entirely uninspiring lump of a hill and it is even hard to see how it can be classified as a Graham, such is it's apparent lack of any significant feature. First view of Creag Ruadh - can you see where it is yet? Leaving the track and taking to the slopes of Creag Each

Creag Each on the other hand does look like it has a bit of character, and the ascent is made more interesting by the evolving views back down to Loch Earn and a number of little crags, gullies and at least partially frozen waterfalls. 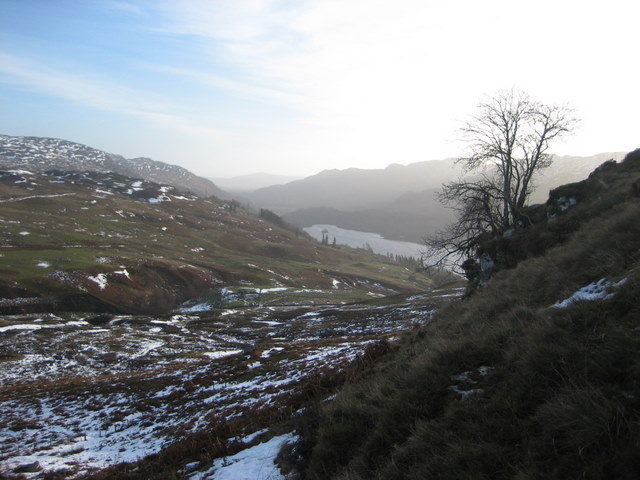 Looking ahead to Creag Each

Once onto the summit plateau, Ben Vorlich looms large across Loch Earn and it is a fairly leisurely stroll up to the small cairn which sits atop a little crag with fine views north to the Ben Lawers group and the Tarmachan Ridge, with the dam just visible and no more. Loch Earn from summit of Creag Each Ben Vorlich from Creag Each summit 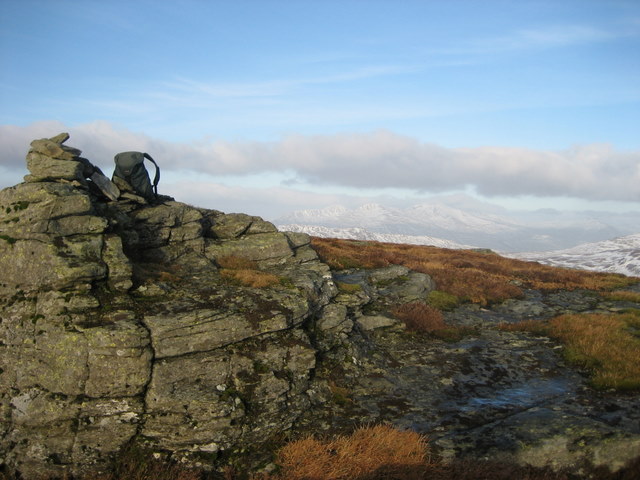 Lawers and friends from Creag Each Across Glen Tarken to Creag Ruadh

After hunkering down for a good 20 minutes or so for a bite to eat and some hot cordial, I set off for Creag Ruadh, taking a more or less direct bearing rather than heading around the head of the glen. The descent is tricky in a few places but presents few problems. Lawers group zoomed on descent from Creag Each

My only real concern was what the state of the stream would be in the glen, but it presented no problems and I managed to hurdle it easily with a short run-up. From here I headed straight up the right hand side of the steep sided craggy gully onto the lochan studded summit plateau just to the east of Loch Eas Domhain. From the top of the gully There was still no real indication from here of exactly where the summit was likely to be, but a quick compass bearing put me on the right track and I soon reached the summit - another tiny cairn perched on top of a rocky outcrop. I have to say that the summit area of Creag Ruadh has more character than that of Creag Each, although Creag Each is the better all round viewpoint. Cairn and view north again to Lawers and Co.

It was blowing a real howler (which caused some real havoc to my attempts at self-timer summit cairn photography) so I didn't dally too long before heading back down towards the foot of Glen Tarken. 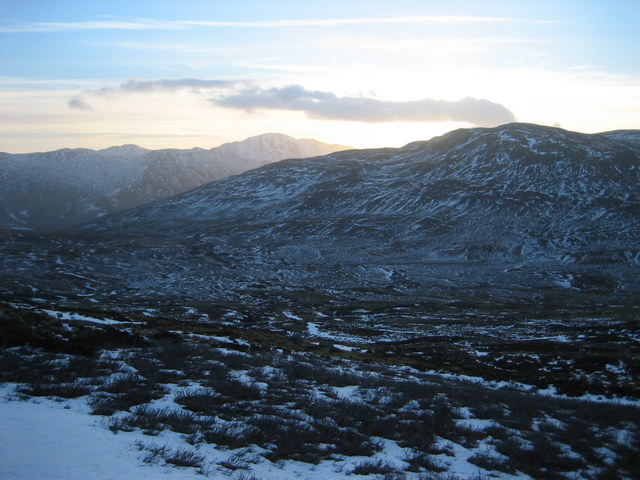 Creag Each and Ben Vorlich behind from descent of Creag Ruadh

I had taken a bearing to bring me out further up the glen than the track junction which cuts back over onto the track I had walked in on, but I emerged onto the track where a very new looking and excellent track cuts off. I decided that it looked good enough to suggest that it connects with the other side of the glen and took the gamble, but alas, it soon ended abruptly and left me with a nasty bog trot across the floor of the glen before I emerged onto the track which would carry me back down to the car on the A85. The poor Scarpas, which I admit are on their last legs, had done admirably well up until this point, but during the bog trot they completely gave up the ghost and opened the floodgates. At least I was almost back at the car and the promise of dry socks and trainers! Solo walks are fab, but you had a doggy to chat with.

I had a week in Skye, put up TR.....some carry on i had with loading the photos!!. Sorted now though

Cracking report Graeme. The colours in the sunrise shot are great and "North to the Lawers Group" shows how much better traction 4 paws give compared to 2 feet

Graeme Dewar wrote:I just had to get out this weekend. Having not been out the previous couple of weekends

Graeme Dewar wrote:and kept my gaze down as I marched purposefully past giving them as wide a berth as possible.

know what you mean here...it's even worse when they have horns !

Enjoyed that, and noticed a couple of reports on these hills recently

In fact, between these, the Glen Artney hills and the Grahams around Sma' Glen, there's a stack of countryside around here that I've barely paid any attention to. I'll have to change that next year, as I'm sure I'll be in Dundee a fair bit looking for a reason to escape