November 2018
The last time I attempted Sgurr a' Mhaim was a comedy or errors. A complete farce in horrible wet and windy weather. An aborted attempt to cross the Steall waterfall in flood, a pointless attempt to find an alternative route up the boggy, mossy near side of the falls and, later, a failure to climb Sgurr a' Mhaim via the North West shoulder in 70 mph winds. After this I walked back to the youth hostel, defeated, had some lunch and tea at set out again, climbing the sub-2000er Bidean Bad na h-lolaire. A miserable, boggy consolation.

January 2019
Back for more. The previous day I'd traversed the Grey Corries, which was so fantastic I felt little pressure to do anything significant on my remaining day in the area. I hoped I could climb Sgurr a'Mhaim at least, then possibly traverse the Devil's Ridge and then climb Stob Ban and Mullach nan Coirean. The Devil's ridge concerned me though, especially with the heavy snow cover and strong winds. My SMC Munros book suggested a rope might be needed for winter traverses and there were very few detailed photos of the route in winter (that's understandable since the last thing you want to do in tricky sections is to stop and take photos). My main worry was the possibility of cornices along the narrow Stob Choire a' Mhail section.

I set off before sunrise and quickly re-traced the same route I'd taken the last time, passing 'turn-around-crag' before reaching the easier upper slopes above Lag Gorm. Strong winds were forcast (around 40 mph) but so far it was nothing like as bad as last November. 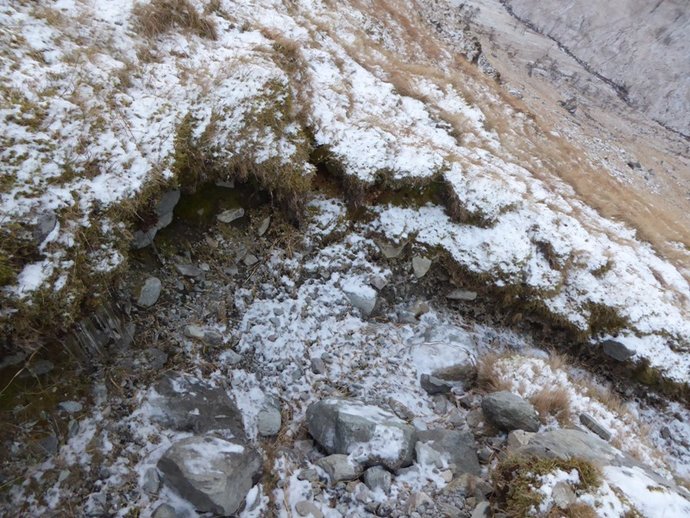 'Jacket hole' where I remember stopping to put on an extra warm jacket shortly before turning around last November. 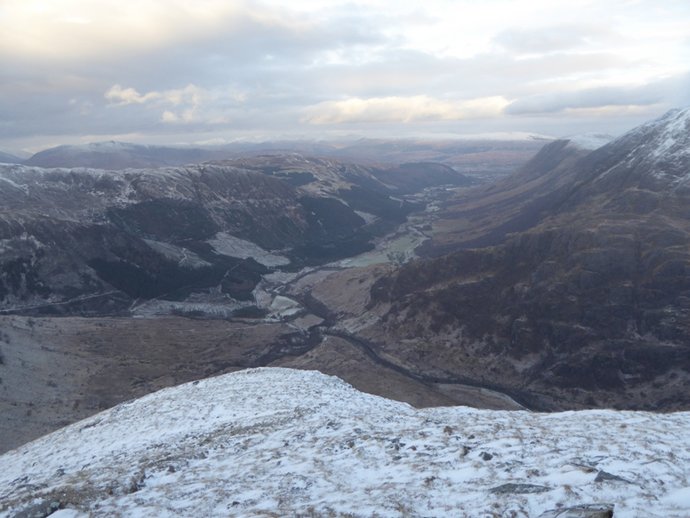 The final part of the ascent of Sgurr a'Mhaim

The summit was clagged in but the cloud cover was thin, with the sun able to shine through. I took a compass bearing and headed off towards the Devil's ridge. Just as I was approaching the Devil's ridge, the clouds parted, revealing the whole thing in front of me. My immediate reaction was reassurance. This doesn't look so bad at all. No cornices! 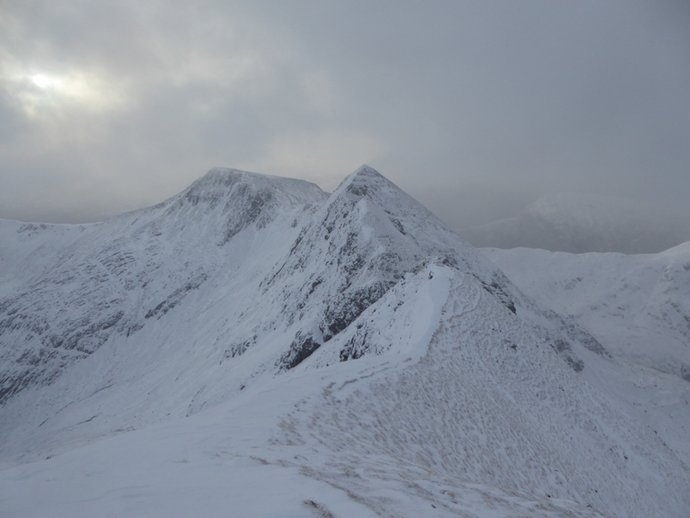 There were a couple of mildly scrambly sections. The first was an awkward step up - a bit more difficult than it appears in this photo but essentially a one-move obstacle. 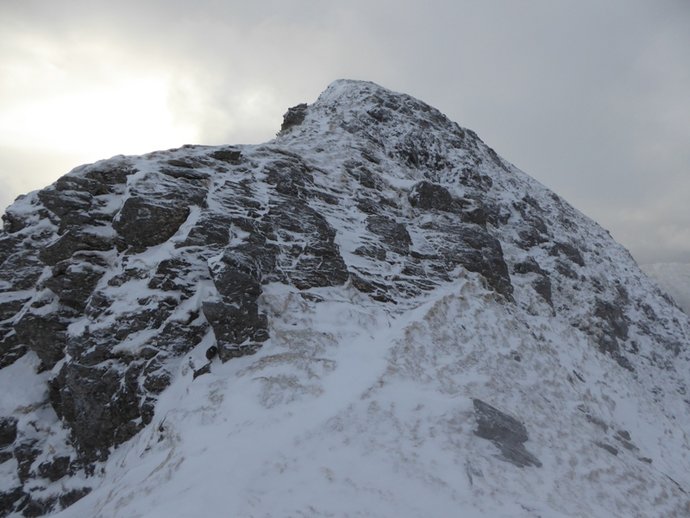 The second difficult bit was short section of jagged rocks about halfway along. I wanted to be a hero and climb along the crest of the rocks but from where I was standing I couldn't see where the route would lead to. So I took the easier route which skirts around the rocks on the West side (this is still quite exposed). Doing so, I managed to get my foot stuck fast between two rocks. It took considerable effort to free myself without lunging forward and risk falling down the slope. The rest of the route was an easy walk along the exposed ridge of Stob Choire a' Mhail down to the bealach with Sgurr an Lubhair. Overall, the Devil's Ridge was pretty straightforward, even in snow and 40 mph winds. It was much easier than the Sron a'Garbh-Choire ridge on Binnein Mor and I certainly felt no need for rope belays.

I didn't spot the obvious direct path down towards Stob Ban and instead climbed up an Lubhair, skirting above Coire nam Miseach without bothering to go to the summit. Just before starting to climb Stob Ban I met another climber who'd walked up through Coire a' Mhusgain and had watched me traverse the Devil's Ridge from way down below. He seemed keen to reverse my route so I gave him a rough description of the ridge and set off up Stob Ban. 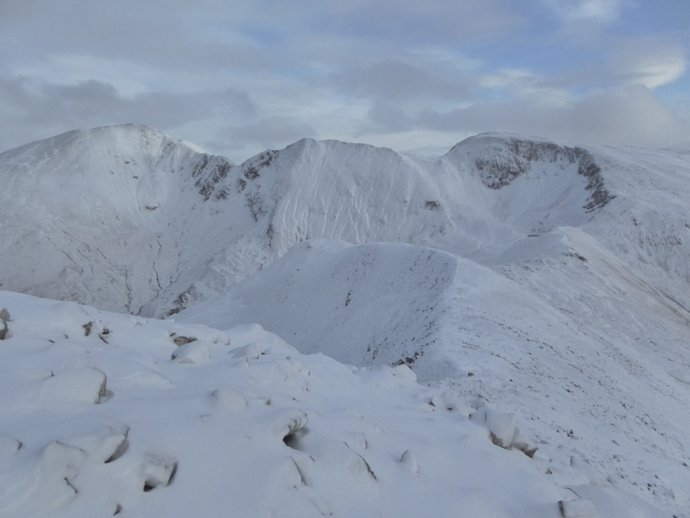 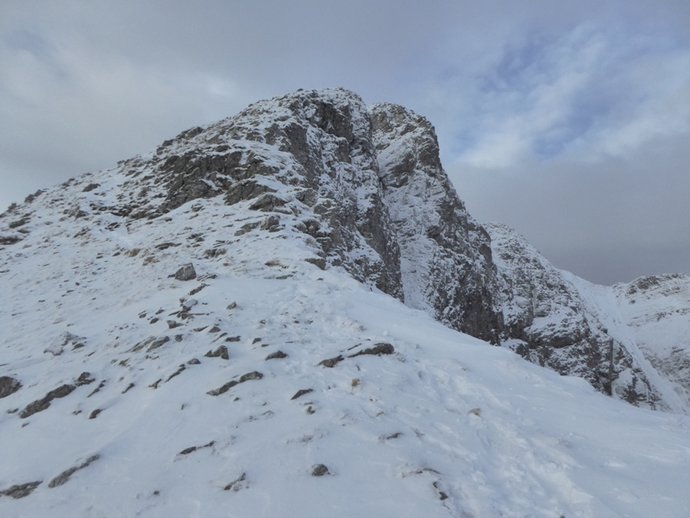 Despite the gusty wind it was fairly easy to stay well away from the edge, although it was tempting to crawl closer for the spectacular views towards Sgurr a' Mhaim: 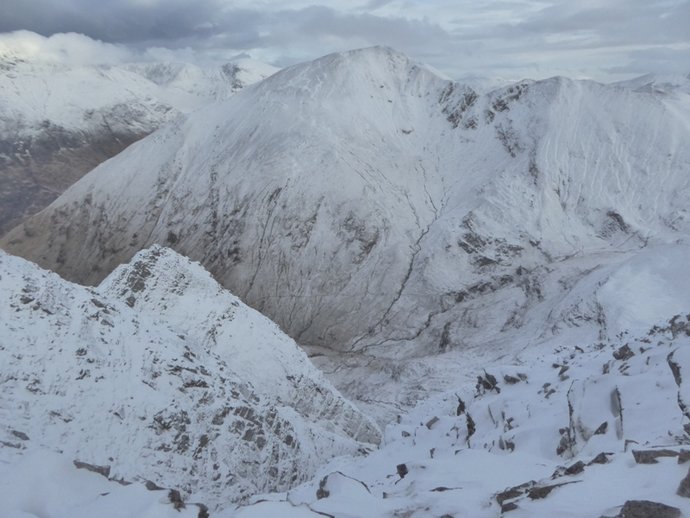 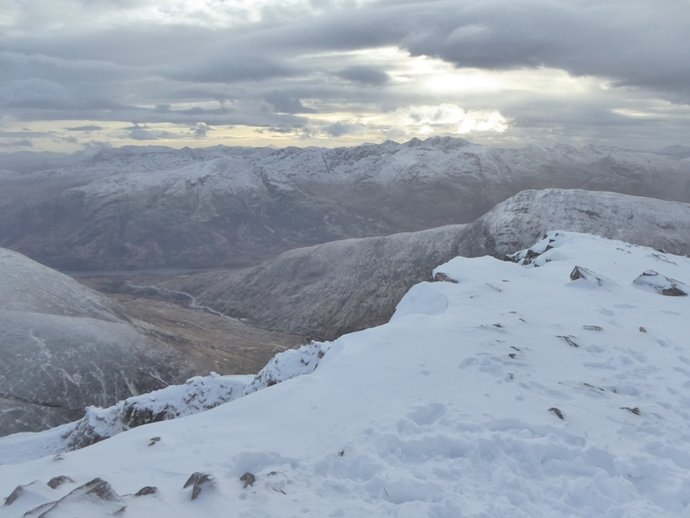 I vaguely considered descending down the interesting looking North ridge of Stob Ban, but opted instead to bag an extra Munro, Mullach nan Coirean. This involved a very long walk along the rim of a huge corrie. Most of the way along, and especially on the way down, the wind was blowing sprindrift up from Coire Dearg below. On occasions this was enough to send me recoiling away as if I'd been kicked in the face. I met a group of three other walkers on the final ascent of Mullach who advised me on the best way down to Polldubh, via the NE shoulder. Throughout the rest of the ascent and descent of Mullach we repeatedly overtook each other until the forest at the end where they stopped for a break. 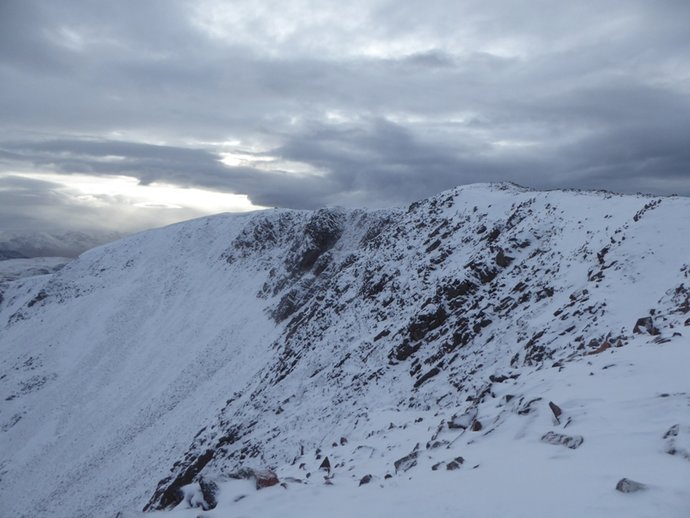 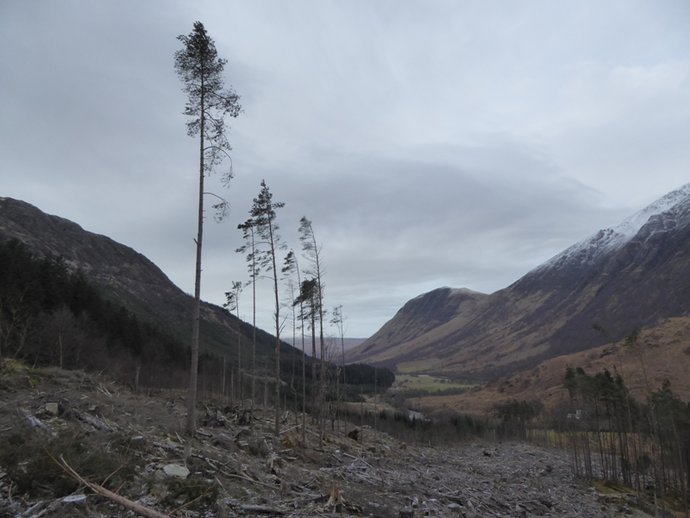 After getting back down to the road I began the long march back towards the youth hostel. Fortunately, the people I'd met earlier on Mullach nan Coirean were driving by and kindly offered a lift for the last couple of miles