After quite a decent break from hillwalking over the festive period, marred by a serious mental health episode, it was finally time to get back to the Donalds. Every time I go on a trip near here I tend to think it will be my last via public transport, but I always manage to find a new bus route and make it work. I have now finally exhausted this resource and there is only one trip of this kind left (Dumfries-Biggar-Peebles), which is seriously pushing it. These hills were the next best thing and, as before, required a 4:30am rise for a 5:35am bus. Finally arrived in Biggar by 7:05am and waited in the bus stop until 7:55am, joined the bus with some schoolchildren reciting higher biology even worse than I did 5 years ago and arguing about the pronunciation of 'trachea'. There was thick fog down which seriously increased my excitement at the possibility of an inversion. Arrived in the hamlet of Drumelzier at 8:20am.

I had 8 hours before the bus back so there was no rush. Decided to pay Tinnis Castle a visit, which was reached in no time. I could see Trahenna Hill peeking it's pink head over the clag.

In the bleak midwinter in Drumelzier: I chose a terrible way up onto the ridge through waist-high heather and light snow, and I overshot the top as well, deciding to follow the S contours instead and joining the dry stane dyke at the bealach between Faulds Craigs and Scawd Law. Going got much easier here thanks to the little space inbetween the heather and the dyke. I'd recommend following the paths which go up Finglen and steeply joining later on. The Scrape was a bit further off than I'd thought but the ascent was at least as big as expected. Making a new path - I could see it from Drumelzier Law later: The Isle of Tinto: 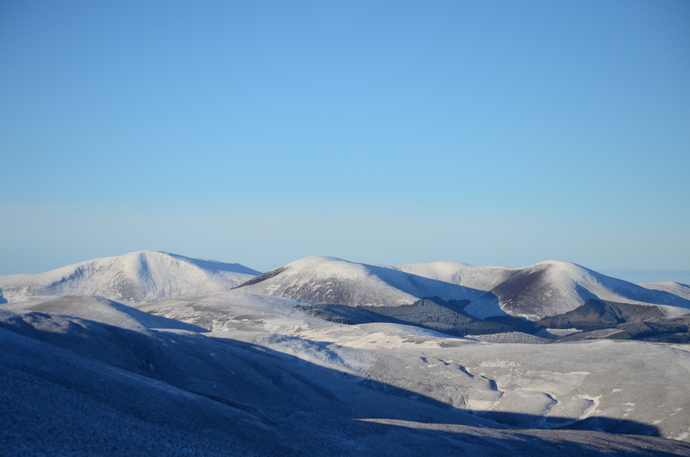 I weaved my way up, following animal tracks most of the way. A pretty unrelenting ascent but the snow wasn't deep, just slidey.

Pykestone Hill from The Scrape summit: The highest point of the day was in fact the easiest summit of the day other than the two bumps inbetween Pykestone Hill and Middle Hill - shows you how much work The Scrape was! I had lunch just before the summit and, taking my gloves off, my hands were in agony despite the blue sky and effectively zero wind. It was a pleasant stroll down and over the next two littler hills, admiring the unbelievable scenery, which I had all to myself. I had followed someone else's footsteps for a while but they disappeared to head up Dollar Law I think. Middle Hill seemed a tad boggy at the fence so I skipped the fence junction a bit. Uneventful and flat at the top. I spotted a figure reaching Pykestone who I thought was the trig for ages - no idea where they came from or went. It was a long, steep way down to Taberon Law, and the heather was grippier than the ATV path. Easy gradual ascent though. I couldn't decide what to do next as heading the whole way back up Middle Hill was almost out the question. I decided to go half way back up to the fence, slightly higher than the Drumelzier Law bealach, and follow the contours round. Less bad on the feet than I thought it was going to be. Chewed on an icicle for a bit as well. The wind was completely gone by now and the sun was warming the back of my head, which felt wonderful. I wrote some lyrics in the snow and had another cup of tea on a makeshift stone seat. A few false summits on the way up but it didn't take long. From here the views were excellent in all directions. I still had three hours left so chose the longer route along the ridge. Not much to see close by other than the endless hare tracks and a pointy stone which I had another tea on.

Kingledores Glen from a different angle than I'd seen it from last year: I'd planned to drop down to the W and onto a mast track but ended up ignoring it and followed it to the top of Logan Head. It was a quick and easy drop down Finglen Rig and onto the track which is being used for sheep and game. Gentle stroll back to Drumelzier through some picturesque farmland and sheilings. Good information board about Merlin and the castle too! I'd tried my best to go slow but it was now a 1.5hr wait for the bus taking me to Biggar. I'd considered walking to Broughton for something to do but decided against it as it was a dodgy road. I sunned myself for a bit, met a walker (maybe from earlier) who offered me a lift but had to decline as he was off to Peebles. The bus going there showed up as he left too. I went in circles for ages and watched the songbirds while my feet got to a level of stinginess and soreness which was almost to the point of panic. Finally the bus showed up and I joined the same schoolchildren who I'd seen in the morning. Dove straight into the Crown Inn for an excellent pint, dinner, dessert and pot of tea which I'd booked. 2 hours later the bus to Dumfries showed up, which I fell asleep on. Probably my last Donald trip for a good few months, before I finally get around to buying a car; got a lot smaller hills and gems to keep me occupied in the meantime I suppose!

The Isle of Tinto

What a day you had, fantastic advert for the Donalds.

Cracking photo's and agree with Pete, the shot of Tinto is awesome.

Enjoyed this report Ian. Brought back some good memories of these hills. Somehow, I seem to have started another round of the Donalds so dare say I'll be revisiting this. Aside from the Tinto pic, the other one that caught my eye was your first photo. A light in the darkness carries its own appeal.

Fife Flyer wrote:What a day you had, fantastic advert for the Donalds.

Cracking photo's and agree with Pete, the shot of Tinto is awesome.

We did Pykestone Hill in the snow too, but don't have such lovely pics as yours. We met up with a walker who said he couldn't come too as he had left his legs behind. Pathetic excuse. Bet that's what he says to everyone he "meets" online, but doesn't like the look of in the flesh.

Sgurr wrote:We did Pykestone Hill in the snow too, but don't have such lovely pics as yours. We met up with a walker who said he couldn't come too as he had left his legs behind. Pathetic excuse. Bet that's what he says to everyone he "meets" online, but doesn't like the look of in the flesh.