The forecast has been good recently. As in, it is accurate. It was due to be sunny, cold but not windy. I had hoped to get some pictures of the hills in the snow. I left the house in Fife at around 8am and it was -8°C .As it turned out, there was not as much snow as expected. As usual, this was a double edged sword.
The approach road to the hotel at Glen Clova was nice and clear. 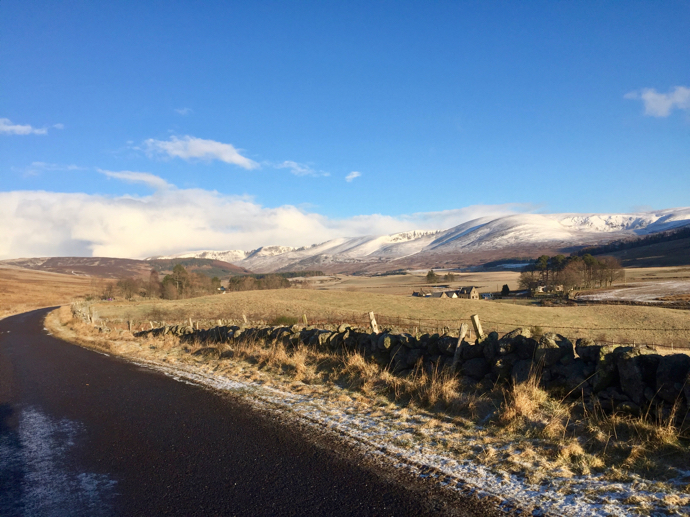 I knew that the hotel had private parking and was happy to see that the public parking was just over the bridge on the left. Only -2°C here. Toasty! Even better, there was a toilet. Unfortunately, the toilet is only open at the weekend. I was worried, and wondered whether to sneak into the hotel. However, by the time I had kitted up, the immediate urge had passed and I though if the worse comes to the worse, I have a shovel in my pack - and also my ice axe if the ground is frozen. You’ll be happy to hear that neither was needed! There was a shoot getting ready to leave, and I noticed some of them eyeing me up curiously as I got ready. I was glad I had a red jacket on as it would make it easier to pick me out from other things that they may be shooting at. 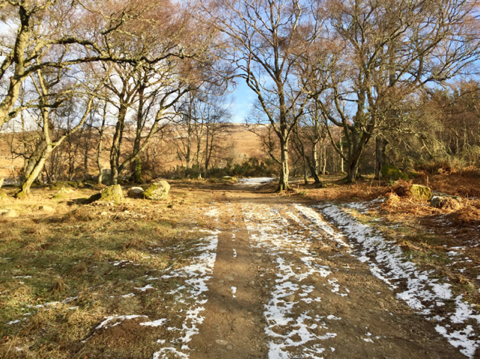 Path just up from hotel

The path from the hotel up through the trees was nice and clear. The ground was hard and there was little snow on the ground. I got through the first gate and emerged from the tress and was struck by how icy the path was. It looked like there had been a big melt and the snow had turned into a mini stream and then it had frozen over to make a sheet of ice. Rather than get the crampons on, I just waked to the edge a bit. 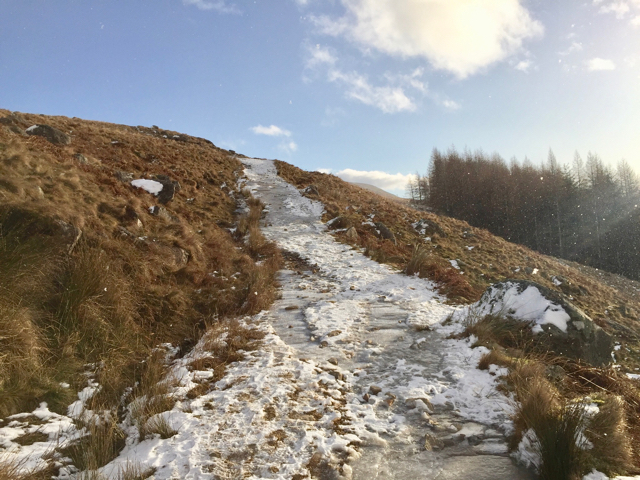 Icy Path - Walked to the side

The views were soon coming a bit clearer as I gained a little bit of height and I saw some snow coming in although it turned out to be just a flurry. 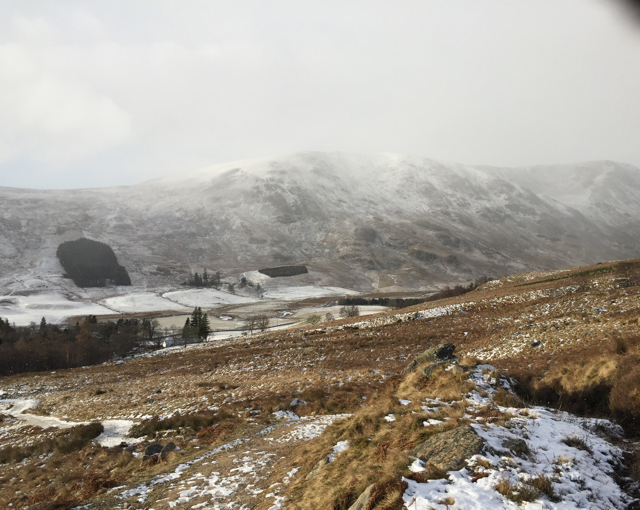 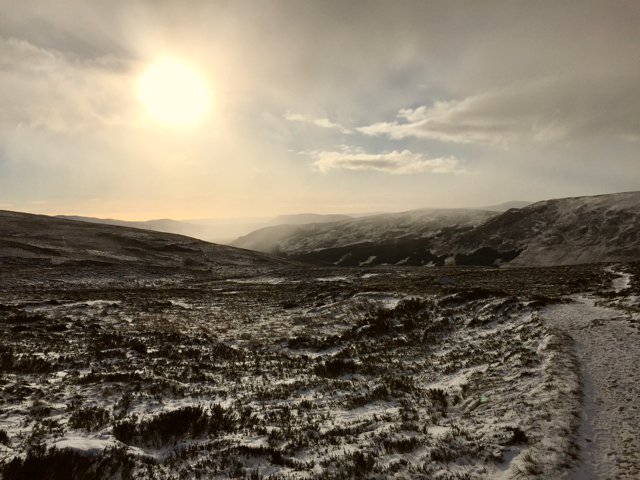 I was sweating fairly hard by the time I approach Loch Brandy, but decided to leave the layers alone. 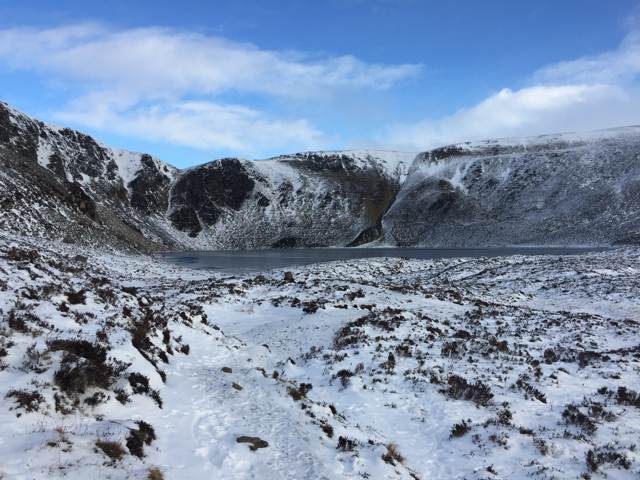 
Base, mid fleece and hard shell. Hat and gloves. Now here’s a thing. Last walk I did, the temperate was roughly the same and I had on a pair of expensive gloves but my hands were cold. This time, I had on a thinner pair of cheap gloves (£5-£60) and my hands were warm. This merits a future experiment to see why it was such a difference. I reached the loch in just under an hour and was up the top of Green Hill in about 1.5 hours. 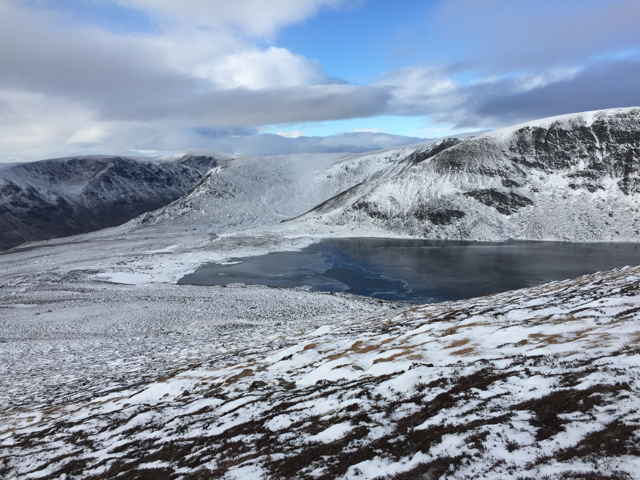 Loch Brandy half way way up to Green Hill 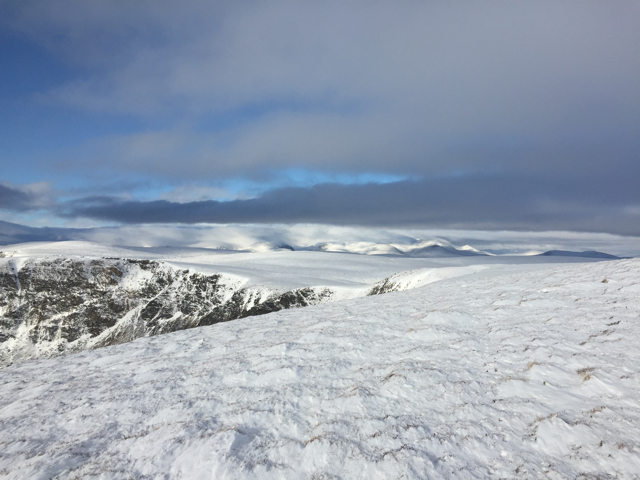 In essence, that was the tough bit of the walk done and it was all fairly easy to be honest. I did take quite a few pictures on the way up so that counted for lots of stops and time to take on my custom made rehydration juice.

I was tootling along the plateau in my usual mind muddle; that means I was allowing random thoughts to meander through my head. Usually, I take my headphones and continue to listen to audio books as I plod along. If you’ve never tried it, I recommend it as it makes the miles go much faster - it seems. Today, I had put the headphones into a jacket pocket before I left, but could not find them. Only when I was putting my jacket away at night did I find them in the pocket. That’s weird. However, it gave me time to allow my thoughts to wander. What I often think about is the route and safety and other stuff. Today’s other stuff was the acoustic guitar. I have borrowed one from a friend for a month to see if I can learn to play - the definition of which is that there is a tune which is recognisable by others and they stay in the same room while I’m playing. A long way to go as I’ve only had it two days. Safety - typically, there’s a lesson to be learned. This trip had two by the time I was done. The first, is this.

Let someone know where you are going! Just before you all start shouting at me, let me explain. I ‘usually’ print out a map, mark my route, leave timings, have contingencies in case I have not been in contact. This walk was one I last did about 45 years ago in primary school. The whole class went up to Loch Brandy and round. Subliminally, I think I had positioned this walk as trivial. One that did not merit the full monty of preparation. Therefore, my prep was reduced this; when my wife asked where I was going, I shouted over my shoulder as I leaped through the front door, “Loch Brandy”. Yes, that was it. Back to my mid walk musings. What if I slipped or had a ‘health event’. Apart from the fact that no one really knew where I was, apart from approximately, it could have been long time before I was missed. New resolution: there is no such thing as a trivial walk, even more so in winter. Lesson 2 comes later.

As I said, I was bopping along the plateau and following the landrover track that could be seen under the snow. Then I noticed two sets of prints veering off to the left. Checking the map showed that I should be doing the same. Lucky really as I had though the path was heading off more to the right. It saved a bit of back tracking. The snow was about 10cm deep in places and I was thankful for the trail blazers who had left footprints for me to step into. I’m sure this is one of the reasons why the timing was relatively fast as I did not have to plod through deep snow. Plod rather than plough please note. I followed the fence line mostly and did not bother with a compass bearing as I could easily see where I was going - uphill. I reached White Hill fairly soon and then finally The Goet where I stopped for lunch. 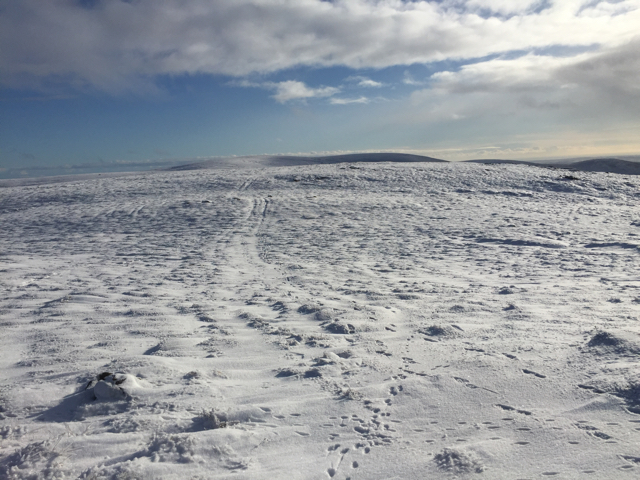 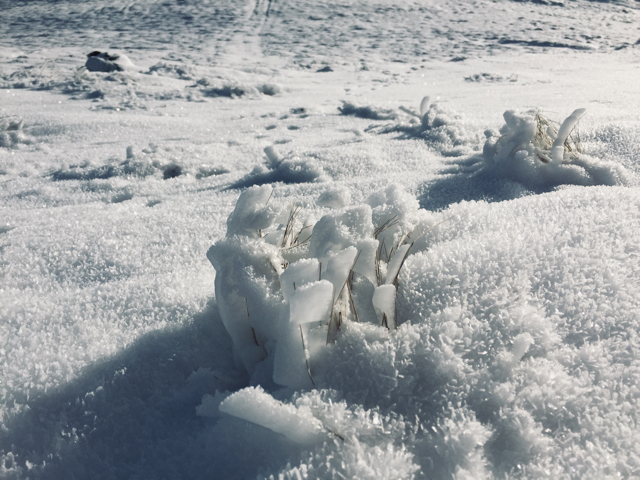 Nice ice on clump of grall 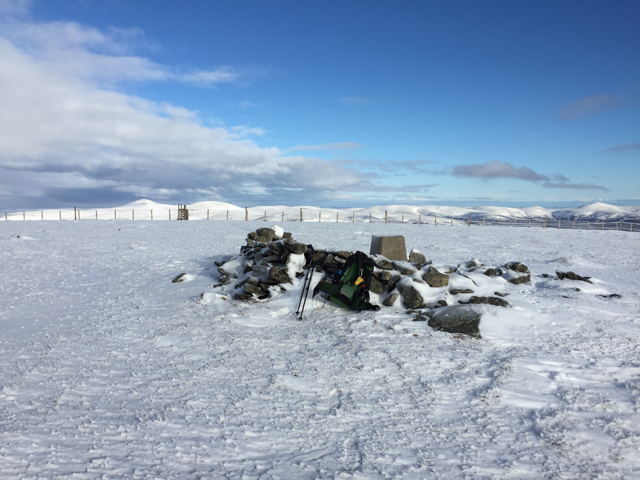 Lunch Stop at The Goet

Today, it was a ham roll with mayonnaise. And black pepper. Tasty, or it would have been if my jaw bone was not frozen. I’m glad there was no wind. Then I tootled off to Ben Tirran, the highlight of the day. Not really, but enough to take a few more pictures and think about getting down. I was making good time.

It really is quite a simple step to head to the south end of Loch Wharral and pick up the track again. Then it’s all downhill on the track which was steep in place. Luckily, it was not frozen and I could walk on it pretty much as if there was no snow at all. I passed a couple on the way up. They must have still been in the early stages of their relationship as they were holding hands as they walked uphill. That looked awkward. I told this story to Mrs B when I got back and she said huffily, “You would have held my hand once upon a time going up a hill!” Hmm, in the dog house again…

I was heading for the point end of the clump of trees and guess what. I missed the litte path that heads off west about 100m or so before the track meets the trees. There is an opening in the fence that heads off through the trees and rather than head back up the track and find the path, I took what looked like an easy option. It wasn’t. Lots of fallen branches and twigs make for very precarious going. Even a tiny twig, if stepped on wrongly, can sent you off in a slip. Going had suddenly become very slow. I knew I should really try and get back west to rejoin the proper path, but I was committed now. Worse was to come. I had got myself in-between the two streams - the Burn of Adielinn, which was in fairly high spate. I had to cross. I chose a spot and took a leap of faith, but no leaps of legs. It was both poles and easy does it. I crossed and felt pleased with myself. Then I had the deer fence to negotiate. I considered climbing it but it was too shoogly. But the walk through the woods was actually quite pleasant as I found and animal trail to follow. Eventually, I squeezed through between two wires and was back on the path about 50m before it met the road.

Walk outs are always a drag, and this was no exception. It went on forever. The only thing that punctuated the boredom of it was the odd passing car and hearing the noise from the shoot. I could see the cars and little figures on the opposite side of the River Esk. Later, when looking at the map, they must have been located at the grouse butts beside Caddam. The crack of the shotguns was remarkably loud as I walked along and I hoped they were pointing the right way. The book I am listening to on audio books is about WW2 and I’m not sure how I would be under fire. It must be terrifying. Back at the car, I had the second part of my lunch and then headed for Dundee where I had an appointment with a piece of cake.

An excellent report and some really nice photos of a great hill. I think you may have got a bit exciting letting us know how much your cheap gloves were though - that's quite a price range for "cheap"

PeteR wrote:An excellent report and some really nice photos of a great hill. I think you may have got a bit exciting letting us know how much your cheap gloves were though - that's quite a price range for "cheap"