After watching the snowy events taking place around the U.K on the news during the week we were a bit unsure what the road conditions would be like for our trip to the Lakes, we had the Premier Inn booked at Cockermouth, it's all motorway and trunk roads from home so there shouldn't be a problem. Friday t.time we checked the road reports and there was nothing to be concerned about so off we set.

The weather forecast for Saturday was excellent, we had plans for a couple of new ones for both of us, Sunday had heavy snow and high winds in the mountains from 9am so we weren't planning anything unless things improved.

Saturday dawned overcast and very cold, the updated forecast was for broken cloud and good visibility from around midday so we took our time getting ready, our planned hills were ones we could take our time over even at this time of the year, well, in theory anyway.

Our hills for today were Sergeants Crag and Eagle Crag, not massive hills by Lakeland standards but looking at the amount of snow on the hills, even the lower ones, it looked like we were going to have a bit of fun.

We set off for Stonethwaite a bit later than I'd wanted to, hoping we'd get a parking spot, we did, not by the phone box in the village but in one of the roadside ones, it seemed busy. 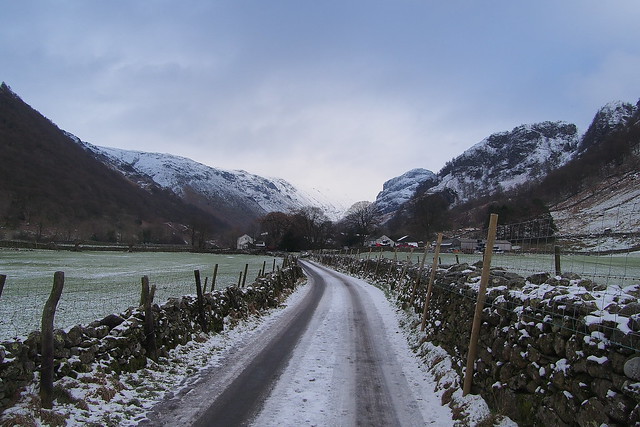 We set off for the bridge over Stonethwaite Beck, missed it

and had to turn back, we must have been fated to do this because as we turned to head back we saw a Red Squirrel as plain as day on a tree trunk, so it was out with the camera, just as I had a decent shot framed he moved

then he spent the next five minutes clinging to the part of the trunk I couldn't get a view of, he must be camera shy, I didn't get my shot, ahh well, at least we saw a red one

Back to the walk, we crossed the bridge and turned right along side Stonethwaite Beck as far as Smithymire Island where we turned up Langstrath Beck, there was a lot of ice around on the paths and fellsides though nothing to cause problems.

We carried on to Blea Rock where we had our first break, 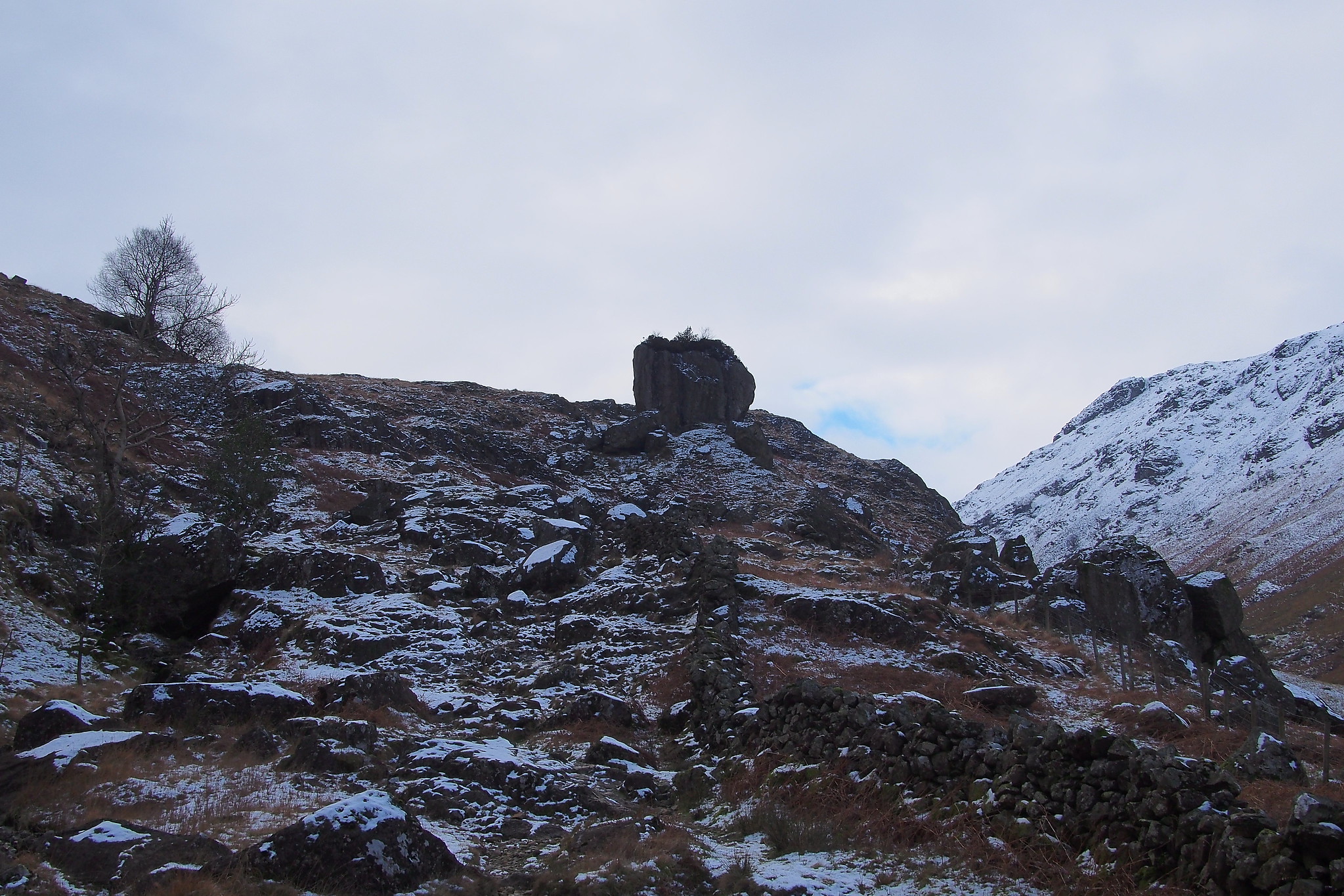 Then continued on to Tray Dub 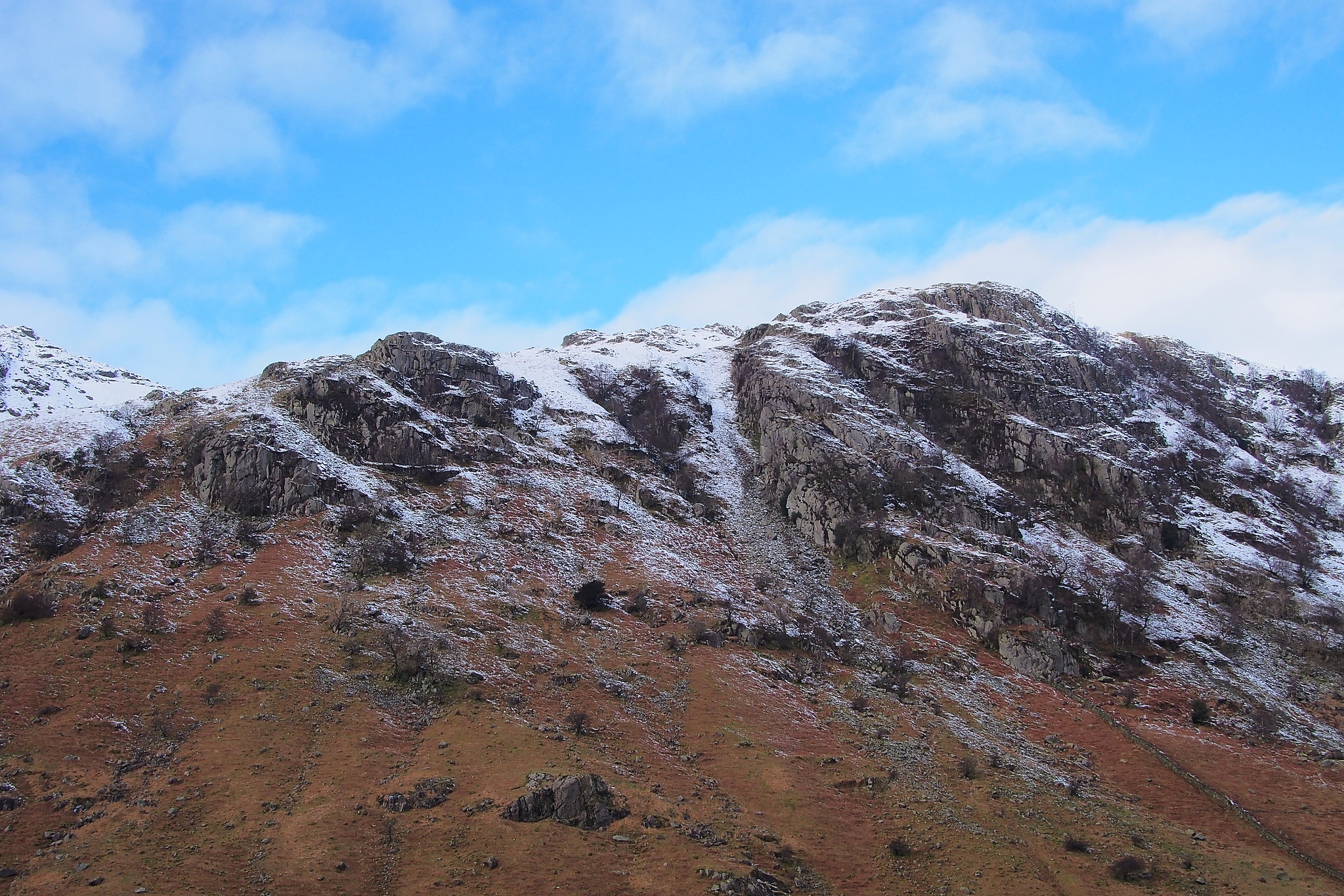 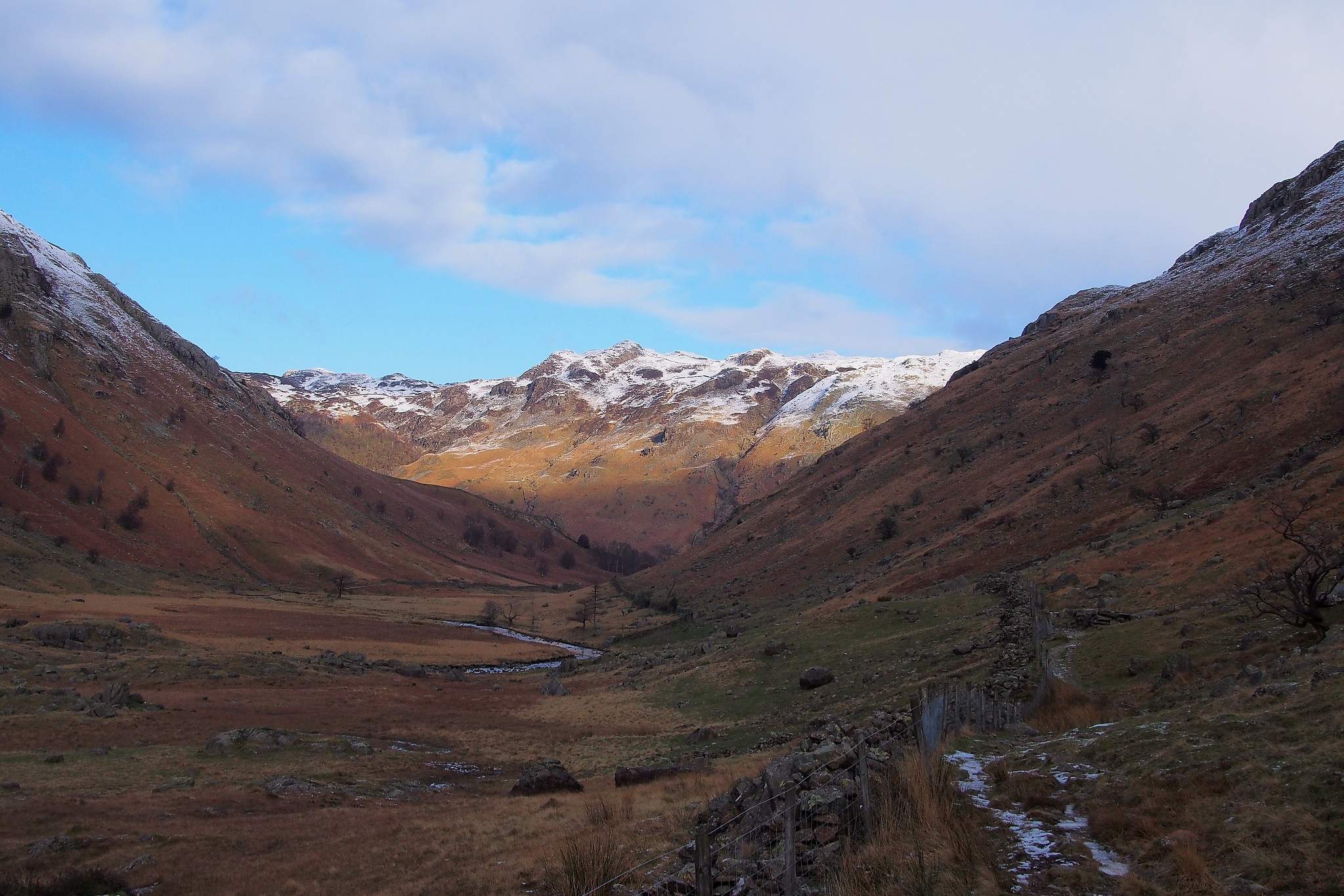 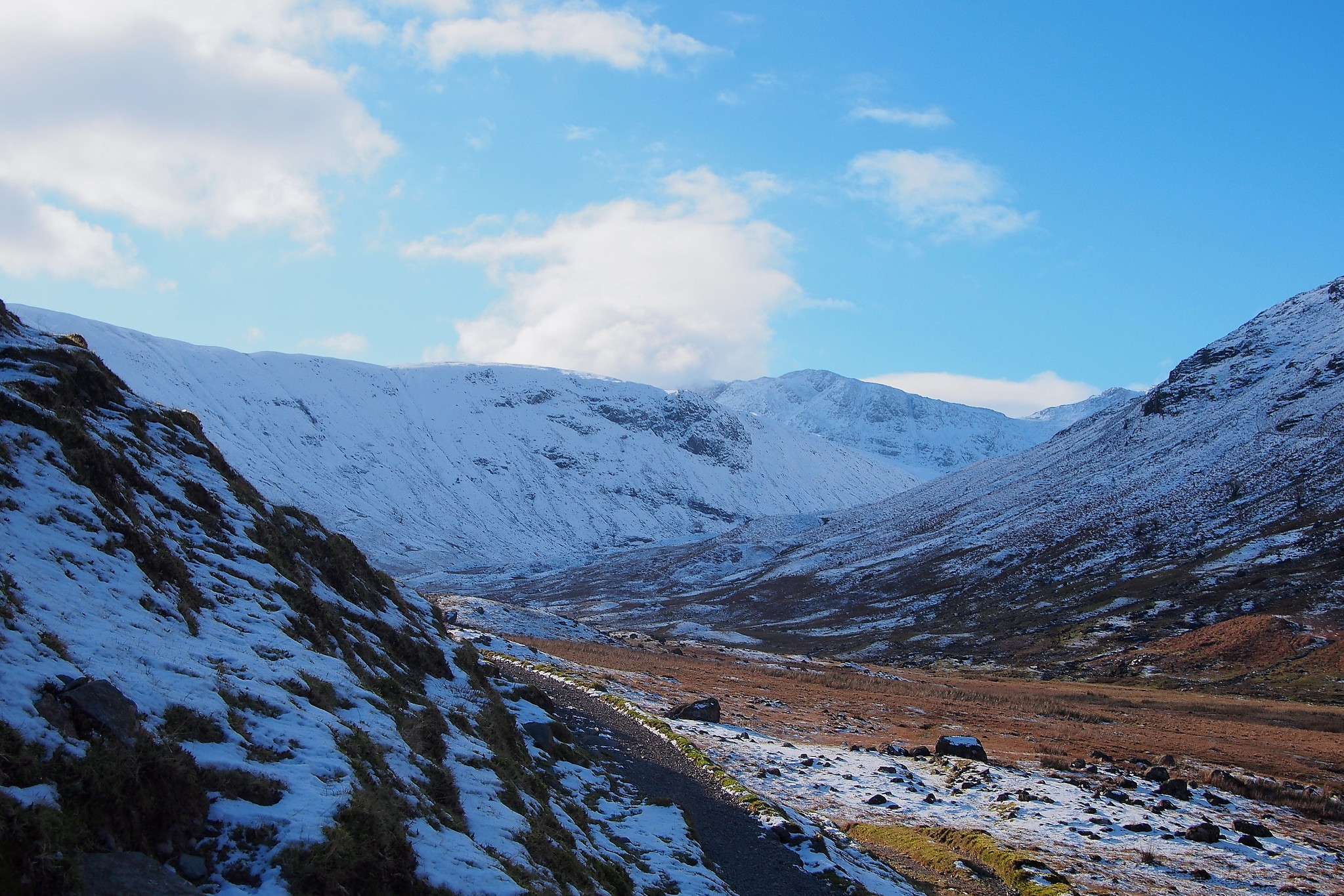 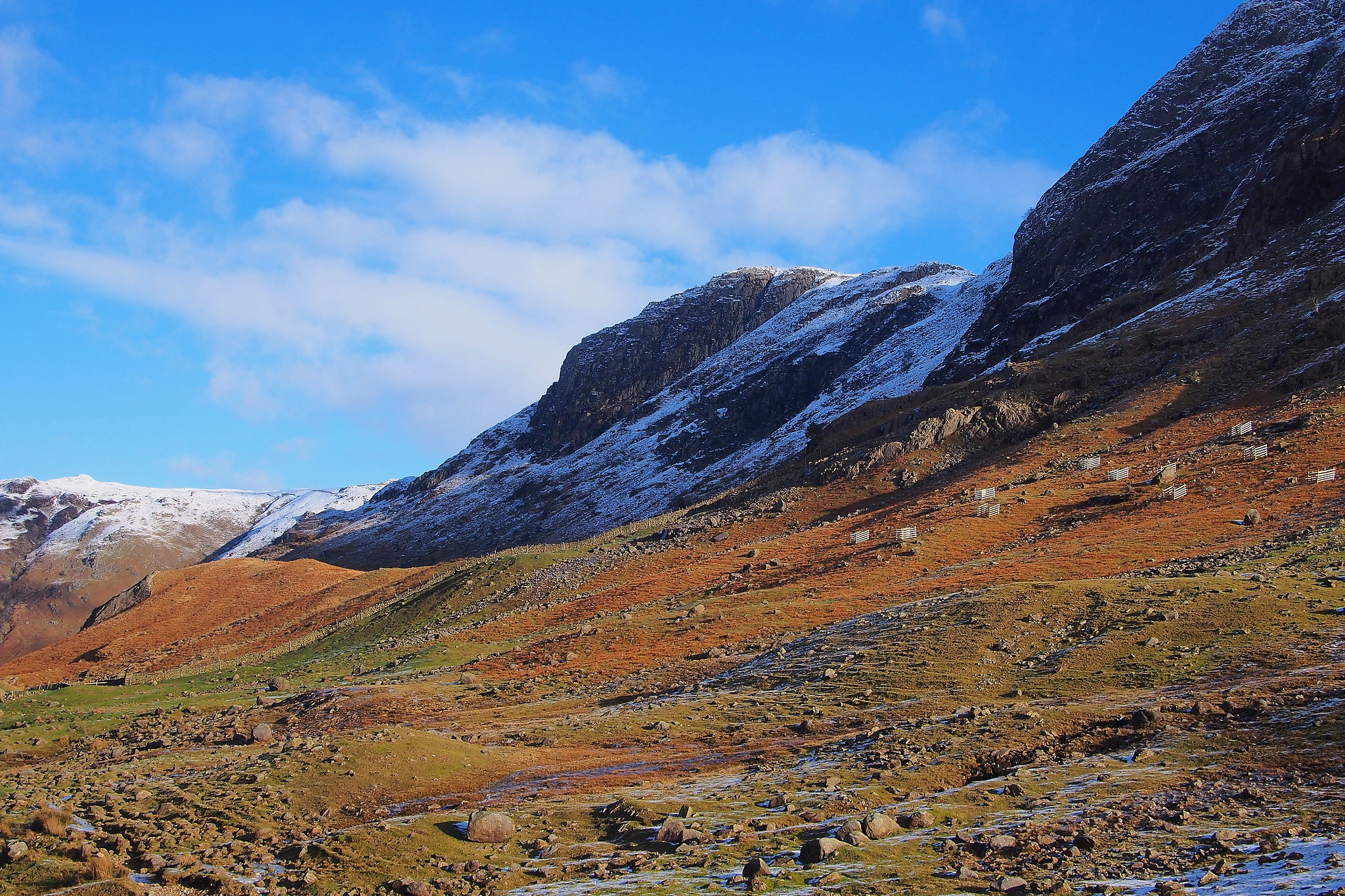 where we started a fairly steep ascent heading for Brown Crag
It was around 350 meters where we met the snow line and by the time we arrived at the wide ridge around 500 meters we were in knee deep snow breaking trail, this was a bit slow and quite tiring, made worse by finding the odd waist deep bit, Sergeant's Crag looked miles off, there was no trace or sight of anybody else, it felt quite pioneering

After a fair amount of huffing and puffing we reached the stile on the wall just below the summit and saw our first evidence of the passage of Bi-peds, two of 'em with crampons on, it's not that bad up here, surely, we had ours with us but felt no need for them yet, it did concern us tho'

The views from the summit were fantastic, snow everywhere and by now virtually unbroken blue sky, what a beautiful day. 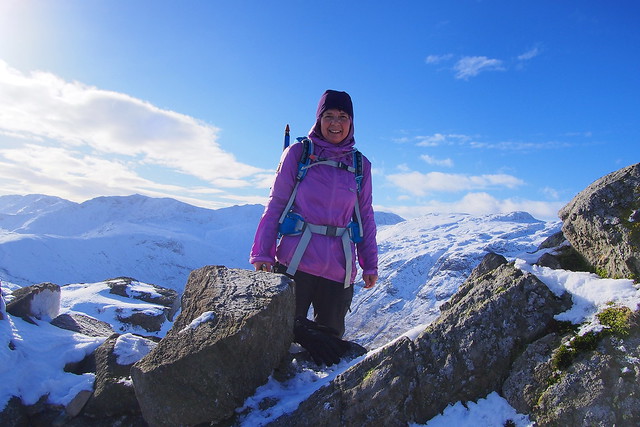 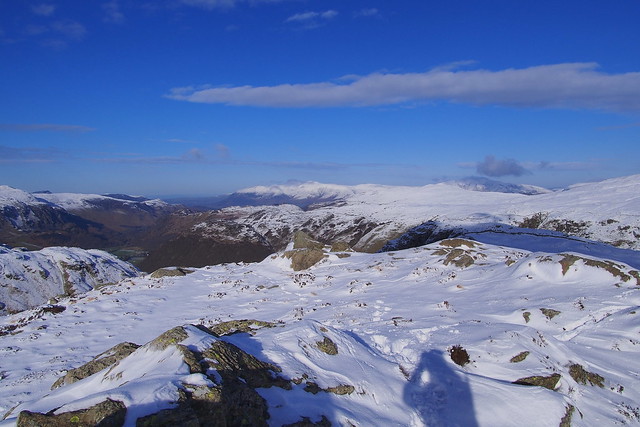 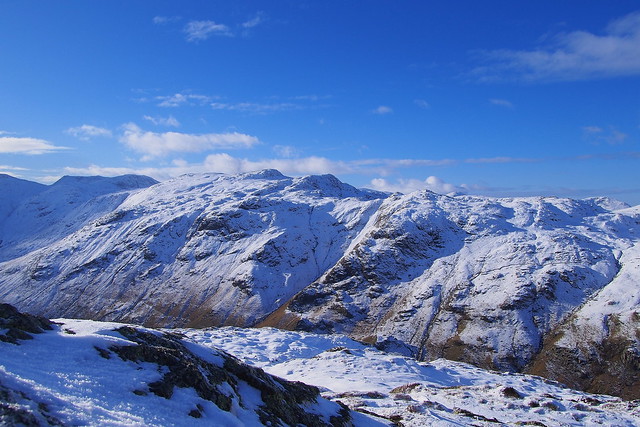 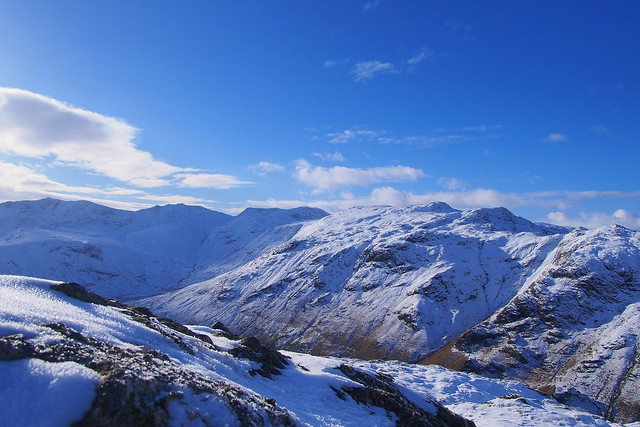 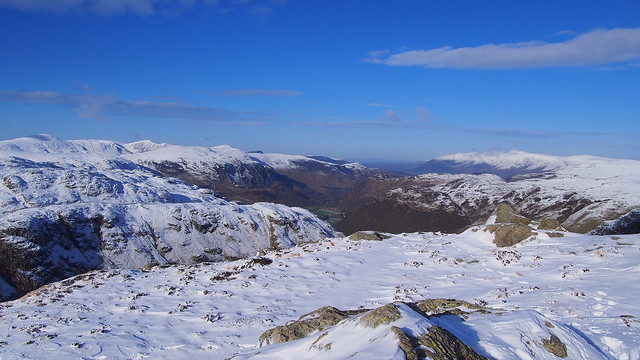 We had a couple of energy bars and a quick slurp and then set off for Eagle Crag following cramponed bi-peds tracks, the snow was soft and forgiving, the footprints took an interesting way down through the rocks but it was ok all the way down, we eventually met the wall and followed it to the stile which is in need of a bit of TLC, struggled over it and made the last little climb onto Eagle Crags summit. 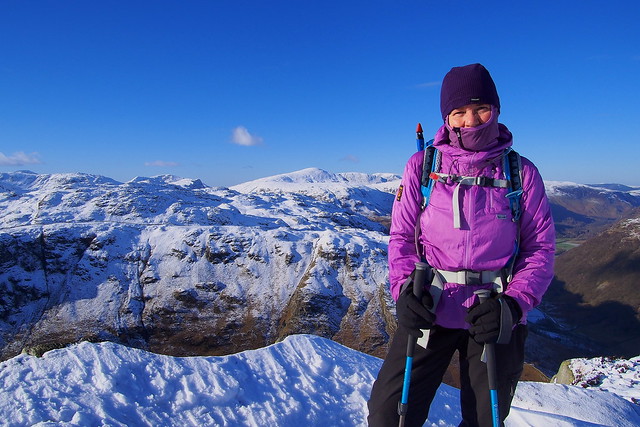 The views were fantastic, the snow seemed to highlight them, it was crisp and clear, one of those days that make all the effort well worth while. 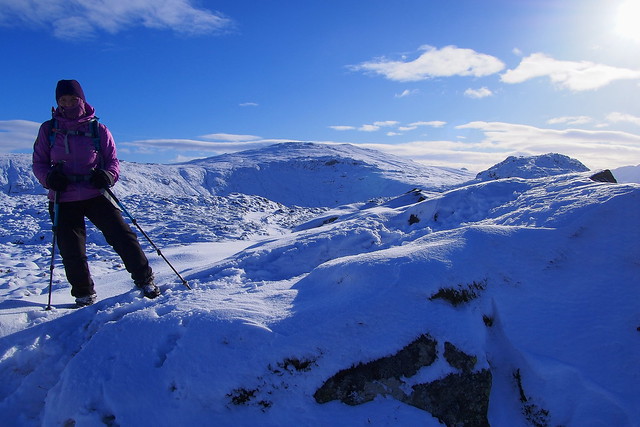 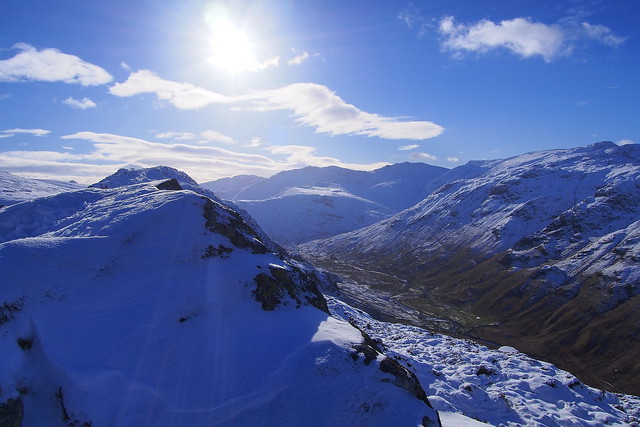 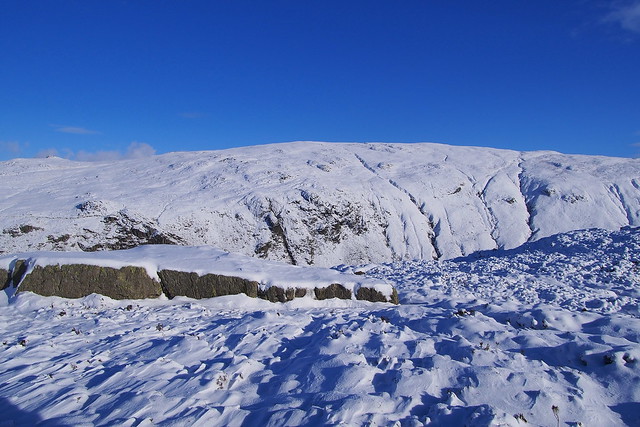 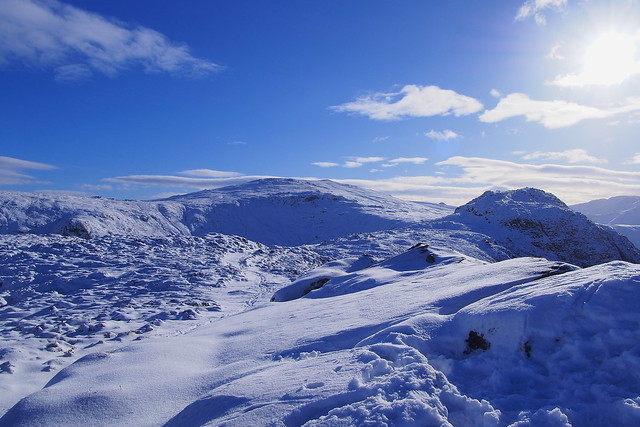 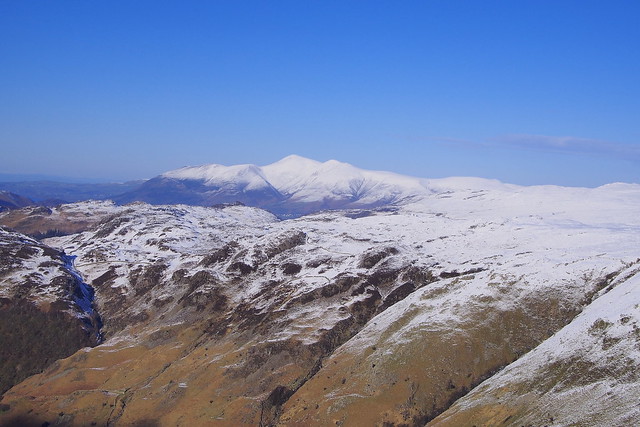 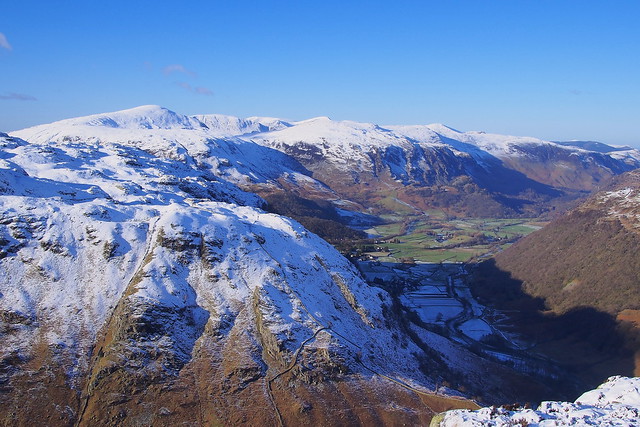 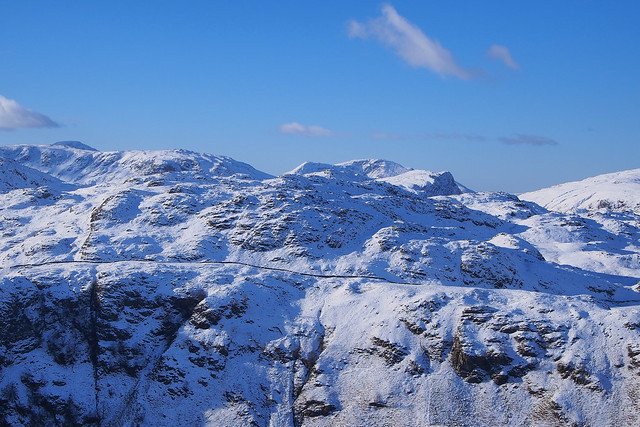 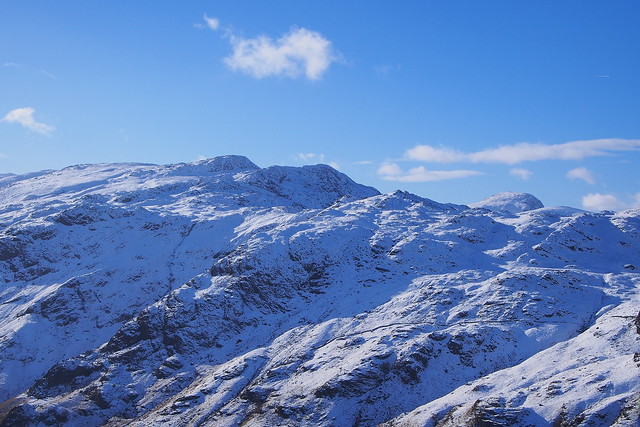 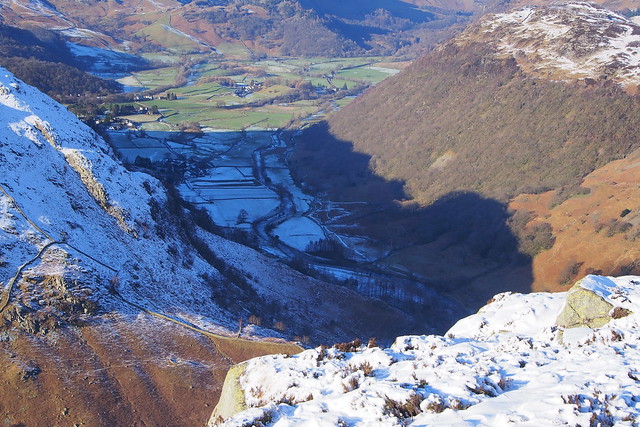 Time was plentiful so we spent a while on the summit, then we set off back to the wall. At the stile we dropped down the other side of the wall and took an angled descent towards Greenup Gill intending to meet it at around NY281116 which we did and crossed it easily.


View down to Stonethwaite from the path 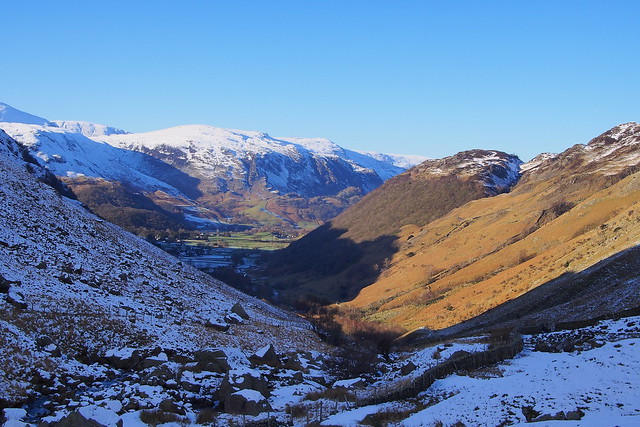 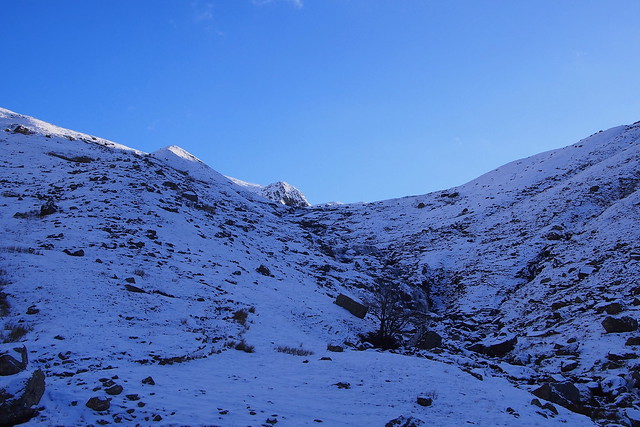 Across to Eagle Crag 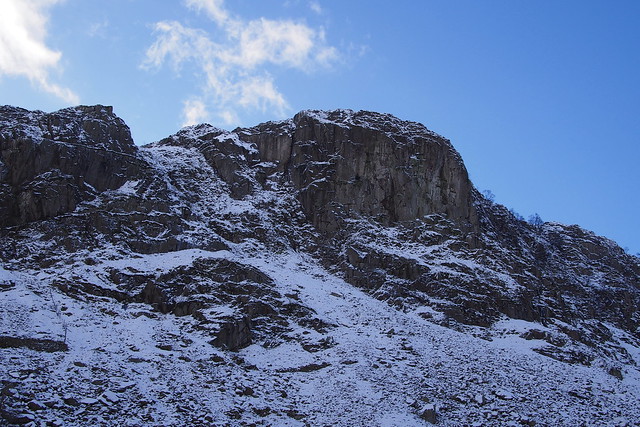 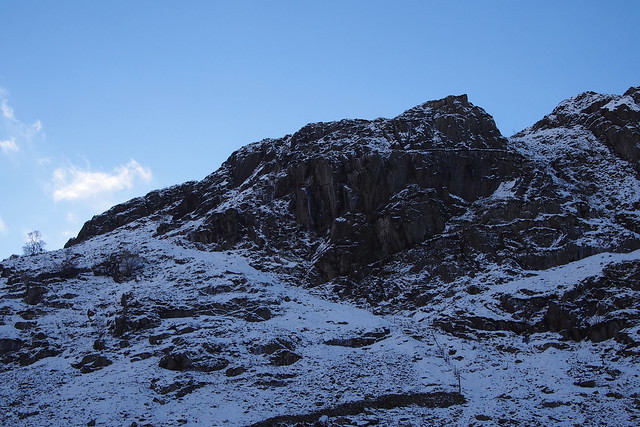 From here we followed the path, well what we could see of it, until we got into the sunlight then stopped in the relative warmth of it to have a good sit down and something to eat. 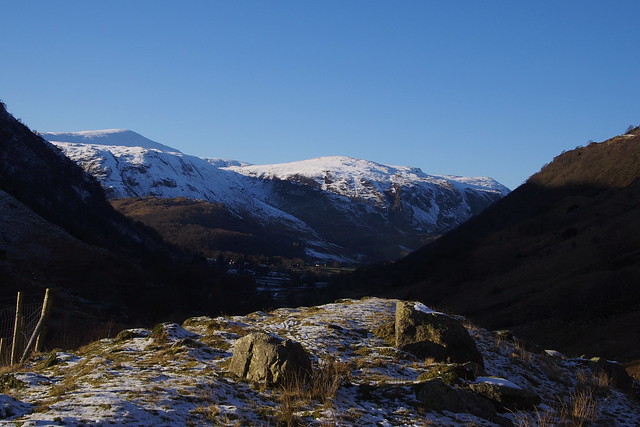 We had a longish break, then set off down to Stonethwaite. All day we hadn't seen anybody close enough to speak to so it did feel rather wild, we enjoyed our time on the hills today, two hills closer to the ultimate goal and, when there's a covering of snow, even the popular Lake District seems as remote as the Highlands.

Back at the car, boots off then the drive back to the Prem Inn. 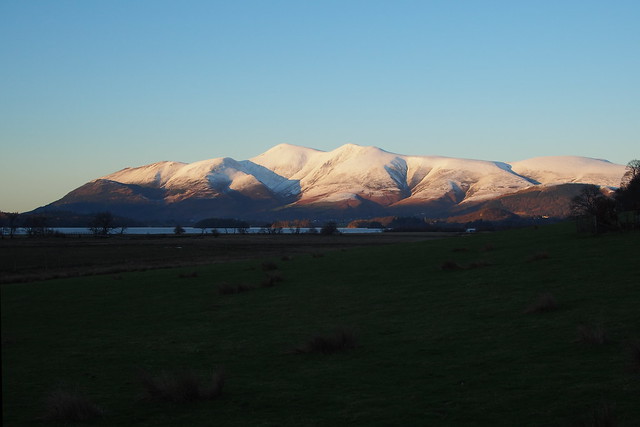 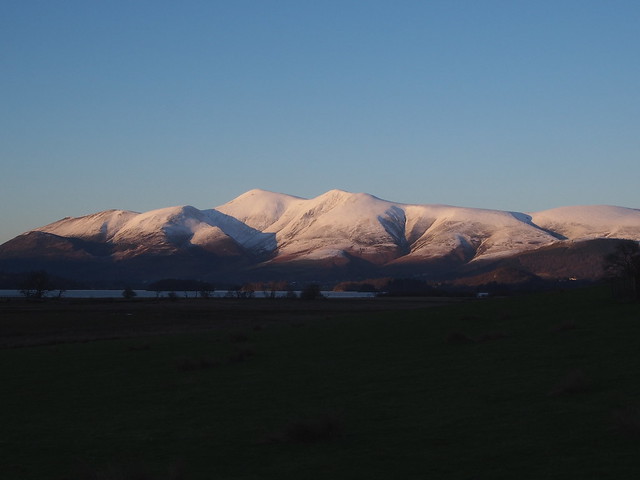 Trying to work out exactly where you went. We went up between Sergeants and Eagles Crags and couldn't find a stile. I was going to say maybe you saw no tracks as you went e lesser used way, but given you got the stile, it must have been us that were off the beaten track. This is my friend getting up the wall 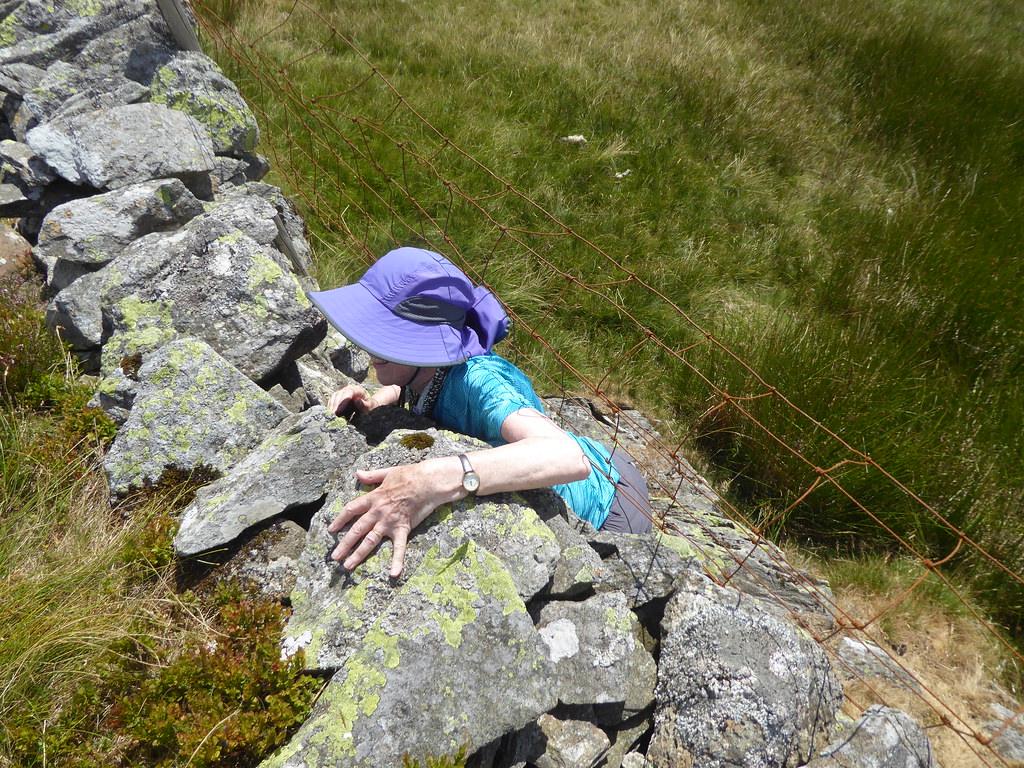 Sgurr wrote:Trying to work out exactly where you went. We went up between Sergeants and Eagles Crags and couldn't find a stile. I was going to say maybe you saw no tracks as you went e lesser used way, but given you got the stile, it must have been us that were off the beaten track. This is my friend getting up the wall

We came from Sergeant's Crag so we were on the other side of the wall to you, the stile is in the corner of the wall and not clearly seen from where I think you are in the photo, this is where we "dropped" over the wall and took a 45 degree route down from the corner aiming for Greenup Gill, from above it looks like a lot of people have done this.
Cheers.

A lovely winters day walk along two fine hills, well done the pair of you

Hi trailmasher,
We really couldn't have asked for better weather, it was almost perfect, the soft snow was difficult in parts though.
That stile