Misty Law and Hill of Stake are two of the hills I see from my front rooms. Seldom a day goes by that I don’t look across to them. Actually going to, and climbing them, has on my radar a few times, but then I’ve made the mistake of reading a few reports about them – dangerously deep bog in some cases, unpleasantly rough ground in others, both in some. These reports have, every time, perhaps not surprisingly, put me right off. However, a few days of cold, cold temps, combined with blue skies and wall-to-wall sunshine led me (naively) to thoughts of skipping merrily across the top of frozen bogs. The night before, I’d entertained a not-very-serious plan on doing the Helensburgh-to-Garelochhead section of the Three Lochs Way, but tbh, I just couldn’t get too excited about it, and sometime during a restless night, I’d shelved that plan; it just didn’t feel right.

So I had a rather late start—it was no mean feat to divest the car, which had been stationary for several days, of its coating of ice. I was slightly worried about road conditions, but figured that, as usual, once I’d managed to negotiate the frozen blocks of snow on my street, the main roads would be fine. And so they were, until I reached the single-track road leading to Muirshiel. It was mostly ok, but ever (overly) cautious, I parked up just inside the gate, still a km or so from the visitors centre, as the road ahead was snowpacked and looked slippy. Leaving the car there meant it would benefit from a bit of sun, which might thaw the skoosher as well.

I set off at 10:30. It’s about 2½ miles to the mine from the VC, and I was expecting pathless thereafter. I’d downloaded Backpacker’s route, and simply assumed that I was meant to follow the track all the way to the mine. But before I got there, I realized I was off piste; he’d headed up the hill some distance before where I now stood. Instead of just staying on the track, which would have eventually brought me back onto his route, I decided to head cross-country from where I was. 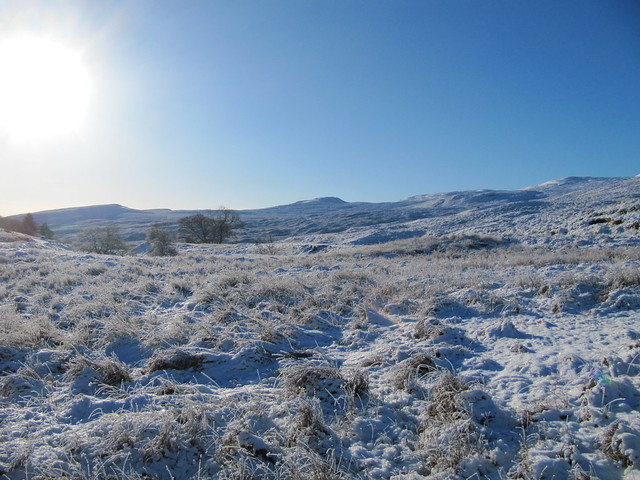 it's a fairly featureless landscape. Don't be fooled by how innocuous those grass tufts look. 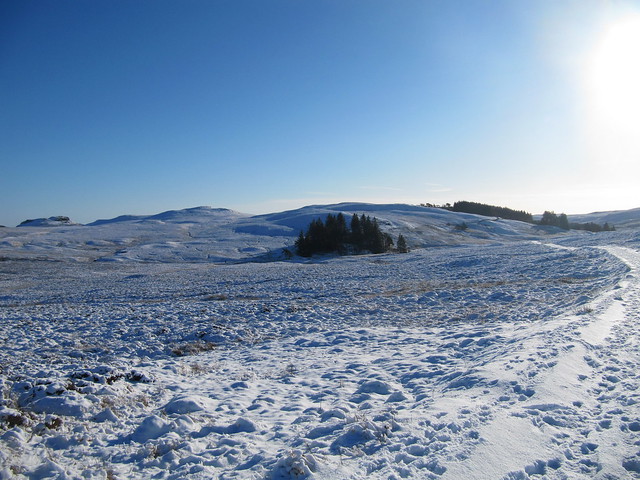 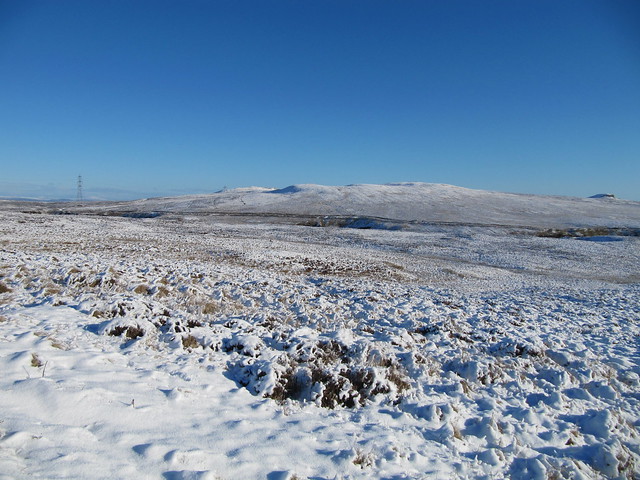 looking across to the Hardridge Farm track, which is what I've come in on when walking all the way from home

Oh, dear. I had seriously underestimated the depth of the snow. Combined with the holy (meaning “full of holes” AND “holy cow!” AND “wholly”) unevenness of the ground, it was incredibly hard going, and my progress was very, very slow. Each step was completely different, and I had no idea what lay below; there were holes aplenty, some of them quite deep. Not only that, I was heading in completely the wrong direction; I’d just assumed that the hill in front of me, with a cairn on top of it, was my target. (At this point, I think it’s fair to say that there are simply some lessons that I am NEVER going learn.) 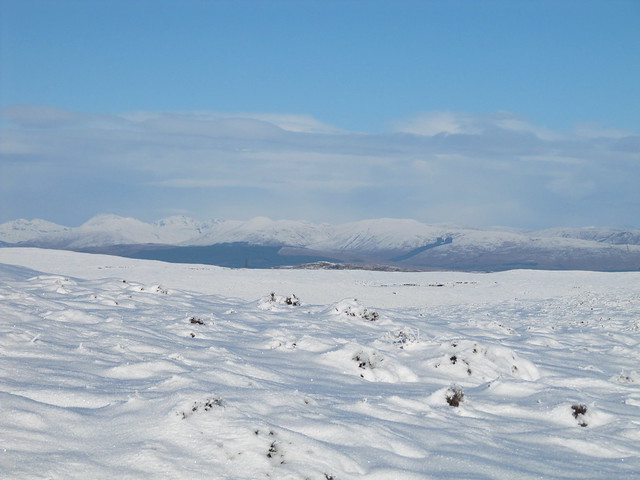 toward the Luss hills, methinks (I did manage to get high enough to get the pylons out of the pic)

After toiling arduously – and I do mean arduously – in the correct direction a few hundred meters, having to extricate myself multiple times from thigh-deep snow and/or holes, I decided that the best course of action was to make my way back down to the mine track, and take it from there. The problem was that I’d pretty much exhausted myself by the time I reached it. I’d already decided that that the loop route I’d intended had become unreachable for today, but thought/hoped that maybe I could at least make it to the S2K, Hill of Stake. I carried along the track to the mine, and even found footprints leading in my direction. Good news, then I wouldn’t have to break trail; that should help. But I was worn out, and had had enough, and before I’d gotten very far above the mine, decided to call it a day. The outing was a good reminder of how much more time and effort snow makes. Even without a hill to show for it, it was one of those brilliant winter days when it just feels good to be out.

So the title still stands true.