Windswept South-West but a calm approach to Beneraird

Windswept South-West but a calm approach to Beneraird


The timing for this walk was determined by the Met Office. Initially planned for Friday when little rain was predicted, when the forecast changed for the worse I moved it to Sunday. A dry day with some sunshine was promised. Gales were also predicted, but I preferred that to getting soaked. My aim was to collect the four west coast Marilyns from Stranraer to Girvan. That called for an early start so I was on the road near Edinburgh shortly after 6:30am heading to Stranraer and Cairn Pat.

I'd seen other reports that mentioned driving 300m up the concrete track leading to Cairn Pat and parking by the reservoir, so I did too. There is enough room for a couple of cars to park on the verge and the track was wide enough for me to do a five point turn. There was no locked gate this time where the concrete ended, and a rough muddy track continued easily towards the mast, building and trig point on the summit. I had been mostly sheltered from the wind on my way up. As I approached the trig point I met the full force of the gale and wondered what it would be like on the higher peaks I would be up later. I grabbed a couple of photos and allowed myself to be blown back downhill to more sheltered terrain. 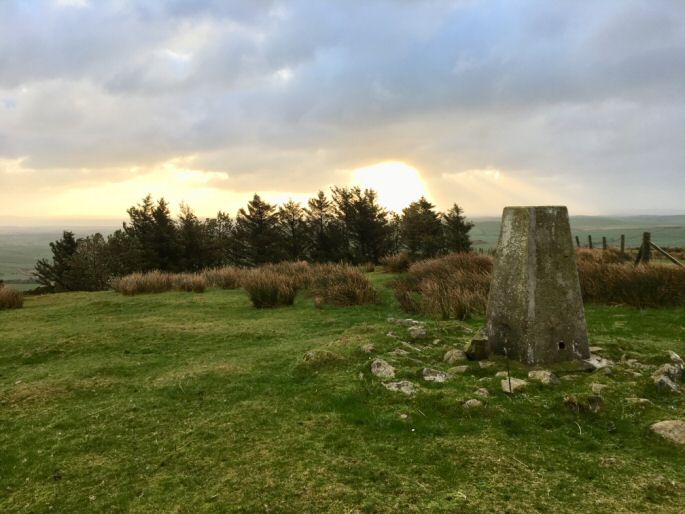 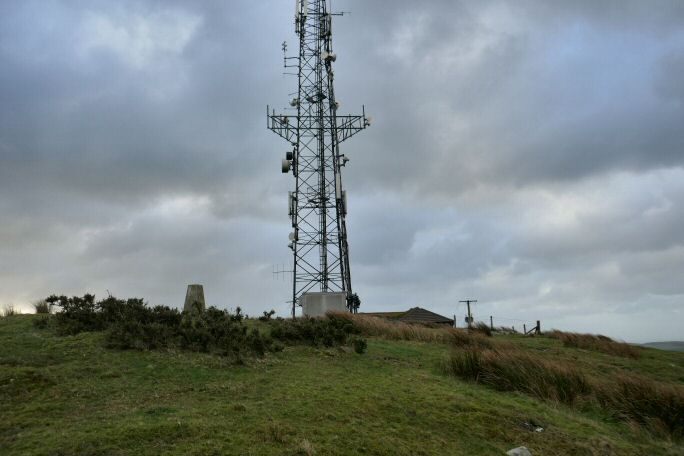 When I'd planned the day I'd decided to approach Beneraird from the west which is not a route that had been described here previously. It has the advantage of starting from a layby on the A77 thus giving more assured access in wintry weather than the other possible start points using single-track roads. With a northerly gale in full force this now seemed a great choice since most of my walk would be along a valley and beside forest, both providing shelter from the wind. The layby is almost opposite the entrance to Carloch House. About 200m up the access track a left turn took me onto the forest road that heads gently up the valley. Not far up I came across a sign showing that visitors are not unexpected, and the gamekeeper has a sense of humour. 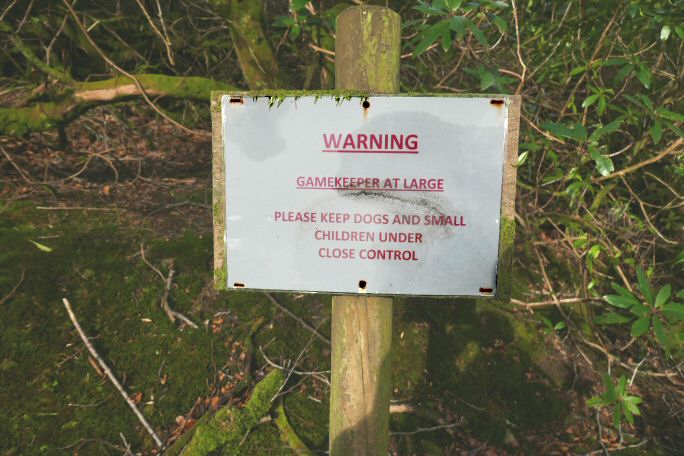 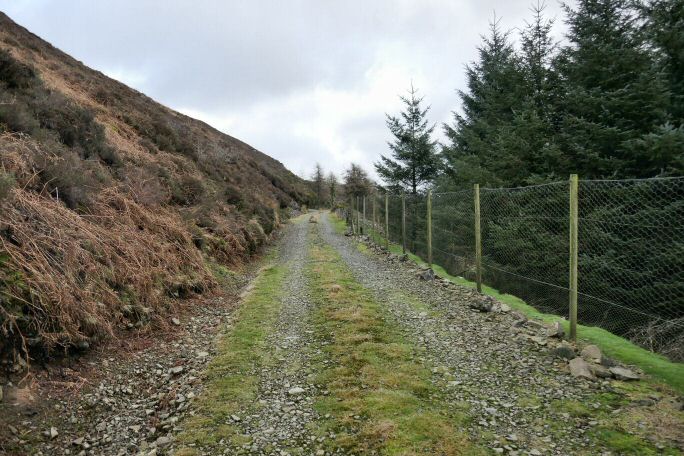 Sheltered from gales by hill and forest

There was little wind for the next 3km, and when I came to a junction near the head of the valley I kept to the higher track. It ended at a gate which I crossed into and then across a boggy field. Heading upstream I met a fence and followed it across the stream then left it to head for the more usual approach track coming from the north. Now out of the valley and moving away from the wind-shadow of the trees it did start getting windy, but never quite as much as on Cairn Pat's summit. Being further inland probably helped. Various objects on the skyline gradually resolved themselves into a few scattered conifers and one large Hitachi tracked tipper truck parked on the track. 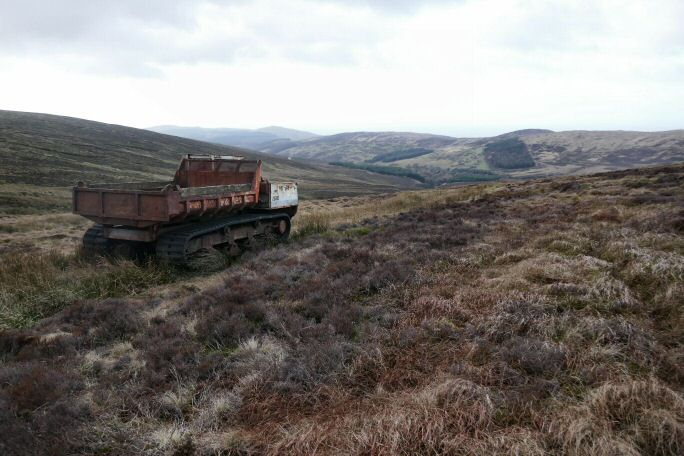 This looked a bit more dilapidated than in PeteR's report and seems to have been abandoned. The trig point came into view, but I kept on until I met a gate across the track. 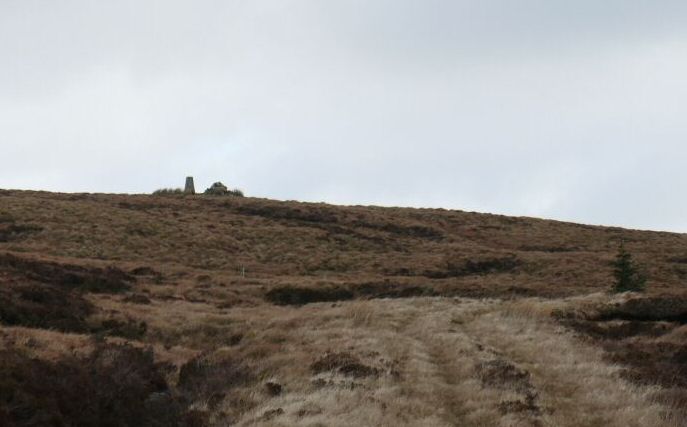 The summit in view from the track

With rucksac still on my back I struggled through the adjacent narrow kissing gate then headed straight for the top along a muddy path. 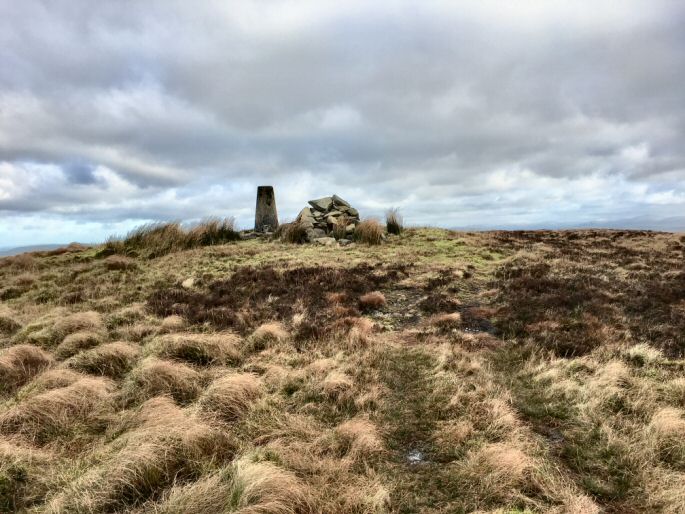 The clouds had darkened as I approached and visibility wasn't of the best. If you want fine sunny views then look at the other WH reports. I could see my next two objectives and the nearby windfarm, but not the more distant Range of the Awful Hand. I also noticed that most of the wind turbines were stationary. Too much wind for them I expect. A mostly static wind farm - no Southern Uplands report can be complete with a photo of one!

On my way down I continued along the track until I reached the fence then followed an 'almost' path next to it down to recross the stream. Easier underfoot than the way I'd taken upwards and less windy as well. From there it was a fine stroll back down the track looking at the bird watering stations set up in the forestry and enjoying a burst of sunshine as I neared the road. Back in the car ahead of schedule I uncapped the thermos I'd carried all the way to the summit and back unopened, and had some coffee and a snack. Fifteen minutes later I set off for objective three.

Forewarned by Jaywizz's report that it is easy to overshoot, I parked on the verge just past the access to Finnart Cottage and was soon heading uphill once I'd untied then retied the roadside gate. Start point for Knockdolian visible behind the trees

After crossing the field I repeated the process at another gate and then met the strongest wind of the day as I started to head up the crest of the ridge. I quickly changed my mind, dropped down the slope a bit, and contoured round disturbing sheep who must have come to a similar conclusion. When I did eventually climb up to the ridge the wind there was nothing like as strong, and I returned down what appeared to be the usual path without any difficulty. From the summit Ailsa Craig was visible through the haze as was Grey Hill and, in the distance, the Range of the Awful Hand and Cairnsmore of Fleet. Range of the Awful Hand in the distant centre with Cairnsmore of Fleet near the right.

The trig point is notable for having memorial plaques on all four sides. Back at the car I treated myself to another coffee before heading for my final hill of the day.

I followed Jaywizz's route, parking in the lay-by opposite the track up to the radio mast. The layby on the A77 from the track up Grey Hill

A short way up there is a notice on a gate announcing it is part of the Ayrshire Coastal Path. From the end of the track I could see the trig point and headed almost straight for it. In the wind it took three attempts to get a zoomed photo of the summit that wasn't blurred by camera shake. My route passed through a field gate shortly before crossing a stream. then climbed over a fence to gain the open tussocky hillside morphing into more heathery slopes up to the summit. The wind was less here and I didn't have to struggle to hold the camera still enough to take a selfie of my shadow with Girvan in the distance. A selfie with Girvan in the distance

I simply reversed my route for the descent and arrived back at the car with 34 minutes to spare before sunset.

Another fine day despite the wind which was not as fierce as I had feared, and it did drop through the day. The sun even came out to shine and the only moisture I felt was a little spray from the breaking waves at the bottom of Grey Hill. I was pleased at meeting my self-imposed schedule and completing the four hills in time. Afterwards I found that I'd taken exactly 12 hours from leaving to arriving back at my house and had driven one hour longer than I'd walked.

Great job - I haven't touched any of these Galloway marilyns as of yet. Would like to pay Cairn Pat and Knockdolian a visit if I'm ever over there again. (I was once right beside the latter but was on a holiday with another family and couldn't just wander off! Will probably steal some of your routes too - cheers.

You hope the Gamekeeper has a sense of humour

4 nice hills these in their own way though.

iangpark wrote:Great job - I haven't touched any of these Galloway marilyns as of yet. Would like to pay Cairn Pat and Knockdolian a visit if I'm ever over there again. (I was once right beside the latter but was on a holiday with another family and couldn't just wander off! Will probably steal some of your routes too - cheers.

They are all fine hills to do during winter months when the higher minor roads can be snow-covered and a low altitude starting point on one that is more likely to be gritted and ploughed is preferable, especially when you don't have passengers to help push your vehicle out of icy spots. Not that there was any snow or ice during my walk. There wasn't even any obvious on Merrick..

PeteR wrote:You hope the Gamekeeper has a sense of humour

4 nice hills these in their own way though.

It does make a change from the less welcoming notices that can be found.