How Lucy met Little Shephard and bagged her first ton

How Lucy met Little Shephard and bagged her first ton


She's been climbing with us since 2015, working her way through the list of Munros, Corbetts and Grahams. In good and bad weather, she accompanied us to many summits, bringing smiles to our faces when we most needed a happy thought. She's tiny but very brave and she's always first to claim the summit cairn. Now the day has arrived when she reached the number of 99 Munros. Which one to pick for her 100th?

Of course, I'm talking about Lucy the Lamb. We took her up one hill once as a wee joke, but it soon became a habit and these days she's our faithful companion up every mountain. She has been on many interesting routes, from Sgurr na Ciche in the west to Lochnagar in the east, but for her 100th Munro we felt, she needed something special.

We had climbed Baby Buachaille in 2014, before Lucy days. It was a lovely summer morning and we started very early to avoid the crowds. We managed to reach the lower Munro, Stob Coire Raineach, before anybody else got out of the car

and enjoyed half an hour of silence and solitude on one of the best viewpoints in Scotland (old report here). Since then, we kept the Little Shephard in our minds as a winter walk, and by "winter walk" we meant proper deep snow conditions, not a few cm high up on the ridge!

So when a good day was forecast for Saturday the 2nd of February, we decided it would be a superb idea to combine a long awaited re-visit to Baby Buachaille with Lucy's ton. Our route would follow the classic traverse of Buachaille Etive Beag, no weird detours this time of year:

Track_BUACHAILLE ETIVE BEAG 02-02-19.gpx Open full screen  NB: Walkhighlands is not responsible for the accuracy of gpx files in users posts
On the way down, we recorded -11*C somewhere between Spean bridge and Fort William. The Beehive car park reached -6*C, but no cold could stop me from getting excited about this day out. Just looking around, at the white world of mountains, made me meow!
The car park was busy: We set of, well wrapped up in warm layers, but soon we stopped to strip. It might have been well below zero, but fast marching made us sweat

We almost missed the turn, but soon realized that we had to catch the path higher up and cut the corners, to join a long cue of other walkers, both in front and behind us, patiently trudging up in deep snow:

It was hard work in soft snow, but we enjoyed it very much and couldn't wait to reach the col, where we would be out of the shadows: A long cue of people and dogs

We never expected to be alone on Baby Buachaille on such a splendid day, but it was almost as bad as any high street just before Christmas!

Having reached the col, we stopped for a five minutes regrouping, decided to climb the lower Munro, Stob Coire Raineach, first. Some people went up the higher top first, but a large group of about 20 walkers followed us to the northern top.
Oh, happy days... Snow was even deeper higher up. The last 50 m of ascent took longer than we expected: two steps up, one down. We had crampons and axes of course, but at the moment there was no need to use them.
The cue continues... all the way to the top. Stob Dubh in the background. Views from the summit surpassed all our expectations. We knew it would be good, but this was A-MA-ZING! I wasted no time, grabbed my camcorder: Due north, on the horizon, the Mamores and the mighty Ben Nevis with an odd wee cloud hanging about just above the summit of the highest Scottish mountain:

A bit to the east, the Easains, Blackwater Reservoir and Ben Alder group in the distance:

To the west along the Glen, Aonach Eagach and the distant hills of Ardgour:

The purrr-fect view south along the ridge, with Loch Etive in the background. Is there a better view in Scotland? This one would be hard to beat! The cheeky wee cloud over Nevis: The small summit area was soon so crowded, that Lucy couldn't even make her way through to the cairn, so she celebrated her 100th Munro on a large rock just south of the main top: After congratulating our wee companion and a short rest for a hot cuppa, we set off to descend back to the col, leaving the busy market... I mean: the summit of Stob Coire Raineach behind

The descent was easier than the ascent, we hopped down the deep snow like a pair of happy mountain hares. The re-ascent to the higher top is less than 200m and by the time we started climbing, there was already a well-worn path in the snow:

...which continued all the way along the lovely, rocky ridge of Stob Dubh:

The Big Brother is watching

I wondered if there were any climbers on the big Buachaille today, but didn't see anybody:

After the initial steep-ish climb, we enjoyed walking along the rocky ridge, stopping every so often for more photos & videos...
Panoramic snap of Bidean and Stob Dubh:

People on the ridge: Looking back north along the ridge, to Stob Coire Raineach and all the fun in-between

Just below the summit there was one slightly awkward spot, but I went for it with no hesitation: ...and soon arrived by the cairn marking the highest point. There are two cairns, the first (northern) one is the true summit.

We were never alone on the mountain but when we climbed to the summit, it felt like high street experience again

It was Lucy's time to celebrate her ton, unusually on the summit of her 101st Munro: I'm the king of the world! Ha! 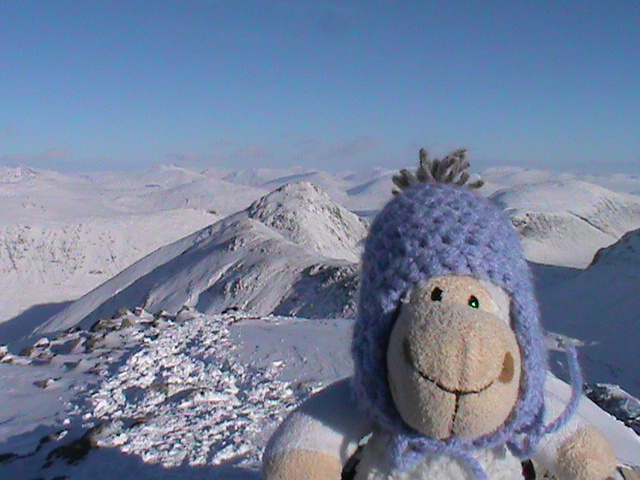 If Stob Coire Raineach is a good viewpoint to the north, Stob Dhubh is a superb vantage spot for Glen Etive and the neighbouring higher mountains. A few snaps below.

We had a short rest by the cairns and put our crampons on for the descent (there was at least one dodgy moment where we thought they would be useful). I guess we could just about manage without them but safety first.
The large group which followed us along the ridge, arrived about 15 minutes after us so when the top got far too crowded to our taste, we set off to get back down. It was a very pleasant walk, we passed more walkers heading for the summit. I didn't count, but it must have been around 50 people on Baby Buachaille that day. I have nothing against other walkers, it's nice to see lots of smiling faces, but there is a certain limit and cuing to the top is in my opinion, a bit past my tolerance point

I was glad to leave the crowds behind on the way back to the col: ...and didn't mind some harder walk in soft snow: We returned to the car park after 5.5 hours of walking. In summer conditions, we did the very same route in 4.5 hours, and that including picnic breaks on both summits. But of course, today was a different story. Deep snow really makes for slow progress, even on well worn paths. Luckily, weather was excellent and we simply loved our second visit to the Baby Buachaille.
Lucy the Lamb was exhilarated to have bagged her 100th Munro. Now she's aiming for 100 Corbetts (currently she's on 82 C's). She had her ups and downs (almost got lost a few times) but over the last 3 years, she's been a faithful companion in our mountain excursions. I'll leave you now with some of Lucy's highlights: 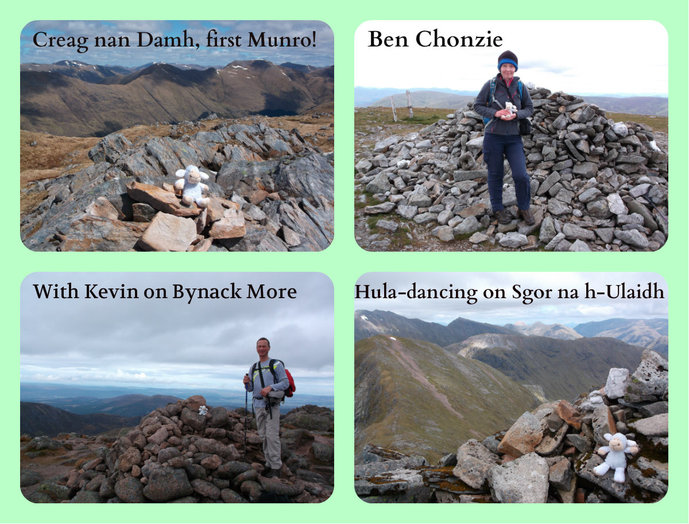 Re: How Lucy met Little Shephard and bagged her first ton