A South to North traverse over a deserted Foinaven in extraordinary weather.

The walk did not start until 2pm as in the morning we climbed Ben Stack in calm but overcast conditions with visibility on the top about 50m. However on the descent of Ben Stack the cloud started to lift. I had tried to traverse Foinaven on each of the two years prior (2016 and 2017) when on the Cape Wrath trail but was defeated on both cases by the weather. Bizarrely in 2016 I abandoned at Bealach Horn with visibility down to about 30m yet having not given up on a climb was able to traverse across to Arkle and summit in perfect weather whilst Foinaven remained covered in cloud.

So given previous disappointments I took a gamble that the weather would continue clear also driven by the expectation that the recent dry weather would result in relatively easy ground and low rivers, so I left my colleague to go back to the hotel at Rhiconich. Thankfully, I was not to be disappointed this time.

our_route.gpx Open full screen  NB: Walkhighlands is not responsible for the accuracy of gpx files in users posts
Leaving late I was under a certain amount of time pressure so took the easy trail up from Lone very quickly. I was only carrying a day pack so managed to get to Bealach Horn by 3.45pm.

I was delighted to see that just as I arrived at the Bealach the last piece of cloud lifted off Ant-Sail Mhor so I set off in high spirits in what was now perfect sunny weather.

This first top was one of those annoying ones that looks just a stone's throw away with little ascent (only 250m from the Bealach) but seemed never to get closer, partly because the route was entirely across pathless ground. There were opportunities to clamber on rocky spines to get a better purchase but to be honest this was a bit of a pull, alleviated somewhat by the close proximity of a heard of about 6 deer. I finally clambered on the top about 45 mins after I left the col. Looking towards the first top from Bealach Horn

On arrival at this first top the first of a series of stunning views opened up, in this case looking eastwards for the first real view of the majestic ridge whose features are mostly hidden from anyone viewing from the west. The next top at 808m was mostly across a firm, although still pathless, alpine meadow dotted with pink flowers, and was easily reached before 5pm. It only then became apparent just how extraordinarily lucky I had been with the weather. To the west through the brilliant sunshine there was a view to my final destination Rhiconich and onwards to the coast yet to the east almost the entire Strath Dionnard was blanketed with thick cloud below my feet at about 600 or 700m. Only tops such as the 801m Cranstackie peeped through. A westerly blew the occasional sheaves of cloud across the ridge so within a minute of my arrival at this top the next top due north at 869m completely disappeared only to reemerge another minute later. 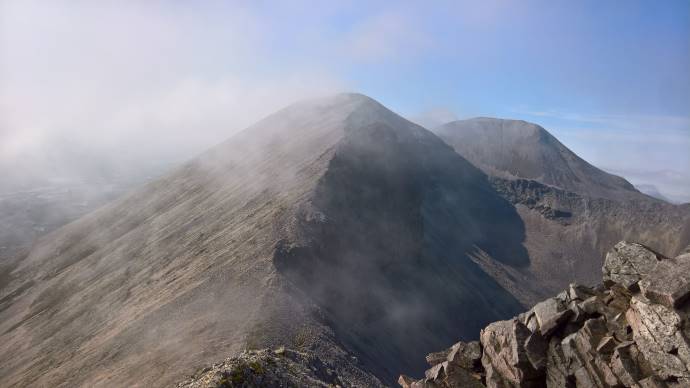 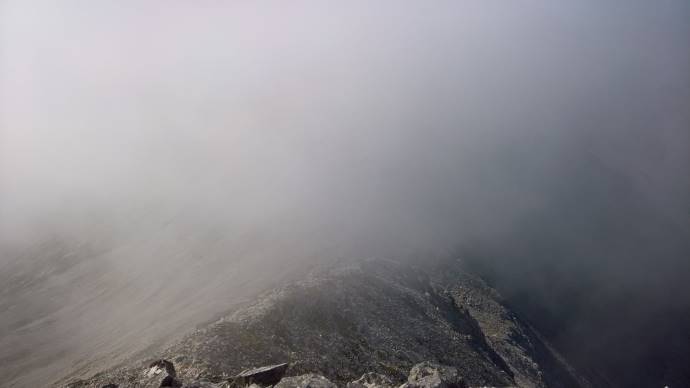 7. Gone.jpg[/attachment]
This was the start of the ridge proper and there was now a clear path to follow. However the descent northerly to the call was steep and sometimes unstable. I could have done with a pole or two to avoid sliding so much. Looking back to a tricky descent 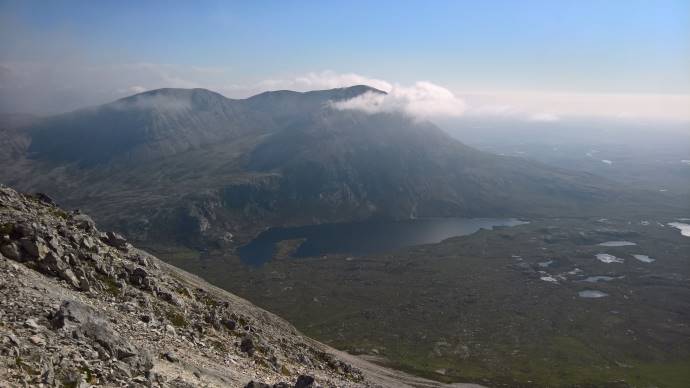 The next destination, the 869m top (does this have a name?) is the most prominent feature of the ridge with its sharp ridge and sheer cliff immediately on the east. A direct line continuing the path results in quite an exposed scramble to the top. On reflection I think it is possible to take a less aggressive safer line to the west which may be more suitable in bad weather. The path is right on the edge Looking East from the summit with Cranstackie Peeping through Whilst on the West its clear to Rhiconich and beyond 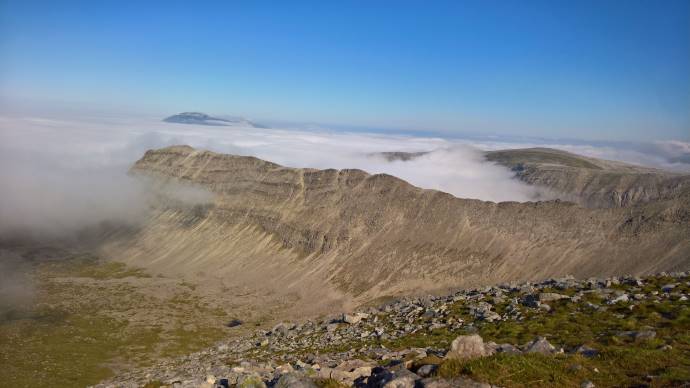 Thereafter there was easy walking across another small top and to the summit Ganu Mor at 911m. This was reached just after 6pm and seeing a phone signal I called my companion to arrange dinner. I was told of his discovery of The Old School house at Inshegra and that if we made it there by 8.30pm dinner would still be available. Feeling confident I told him to book. View from Ganu Mor, the summit Looks too close to be Ben Hope?

After taking full advantage of the weather to take pictures I then headed round to the final top of Ceann Garbh. However en route near the col I saw what looked like an easy grassy descent NW. Lured by dinner I decided to abandon Ceann Garbh and head straight down. This turned out to be something of a mistake. The initial part of the ascent was indeed fairly straightforward. However at about 450m I hit the spine of Craig na Claise and the terrain changed to a series of large rock steps several metres high often covered in thick vegetation that had to either be detoured around or descended directly. Not knowing any better I ploughed on with my destination being the Eastern end of Loch na Claise Carnaich. It took me until about 7.30pm to reach the loch and was now becoming quite anxious as I was running out of time and there were a couple of unknown rivers to cross. The first of these was the Allt na Claise Carnaich. Where it joined the loch it was slow moving but about 3 ft deep. About 50m to the East were two large rocks about 4ft apart which I was able to use to jump across to the northern shore. Later I looked at a satellite image and both these rocks could be seen. However about 50m further east it appeared there were many such rocks and this is probably a better place to cross. Although by now realising I should pick up the pace it was still possible to appreciate what a otherworldly spot this was. A beach protruded into the lock and in the distance Arkle kept watch in the evening sun whilst the wind periodically whipped up the surface of the loch into spray devils. And, completely deserted.

From here I was glad to pick up an animal trail close to the northern shore of the loch. The connecting channel with Lochan Cul na Creige was a mere stride across. Continuing directly east I soon came across a well defined path. At this point I noticed my map, which I needed for the following day, had disappeared. Panicking I ran back over my steps and luckily found it about 200m further back causing further delay.

The footpath hit the road at a bridge next to what appeared to be a substation at NC 266 529. Despite sprinting down the 1.5km of road to Rhiconich I did not arrive until 8.25pm. After a quick shower we arrived 10 minutes late at the School House to be met by a significantly disgruntled owner. However when I told him where I had been and showed him the picture of the beach at the loch our lateness was forgotten as he not only told us this was one of his favourite spots but also that what in the picture looked like a piece of dung on the beach was in fact some peat he himself had left when camping there! The special beach with Arkle looking down

It is worth noting that despite the perfect weather, throughout the six hours plus of the walk I did not see another soul (unlike Ben Stack) and for the time being at least Foinaven remains a comparatively rarely visited gem.

The one part I would be looking to change next time would be the descent. If I had continued all the way to Ceann Garbh I would probably have had a better view of the options. Reading reports of ascents from the north it looks likely that moving directly north at about 400m to take the northerly side rather than the top of Creag na Claise Carnaich may provide a smoother descent. Weather permitting I will be having another go in April 2019. Thanks, looks like a spectacular way to spend an afternoon!

I've also been defeated twice (so far) by Foinaven, I'm starting to think you're not allowed to complete it unless you really mean it.

Keep trying. Its a long way back from Bealach Horn though you might have the chance to do Arkle if the weather is bad on Foinaven

Looks wonderful in this kind of weather. Memo to self yet again: I need to get up to Assynt...

You still managed to get some great photos despite the weather