An Teallach Direct from Shenavall

An Teallach Direct from Shenavall

Munros included on this walk: Sgurr Fiona (An Teallach)

Ever since I started looking at the Cape Wrath Trail I had dreamed of diverting to climb An Teallach, but like so many before the reality of undertaking the CWT turned out to be way more onerous than expected so it became a struggle just to complete the basic route. Furthermore after five days of being battered by the weather and the terrain I decided to pool my resources with a solo Frenchman who was also looking for some support.

Nevertheless, following a favourable turn in the weather as we strolled towards Shenevall bothy the temptation once again reared its head as we admired An Teallach glowing red in the evening sun.

After a few minutes observing, a possible route opened up - climbing one of the steep gullies directly behind Shenevall and then taking on a rising traverse North West, though what was around the corner was anyone's guess. It appeared that we would not be able to benefit from any path in doing so. 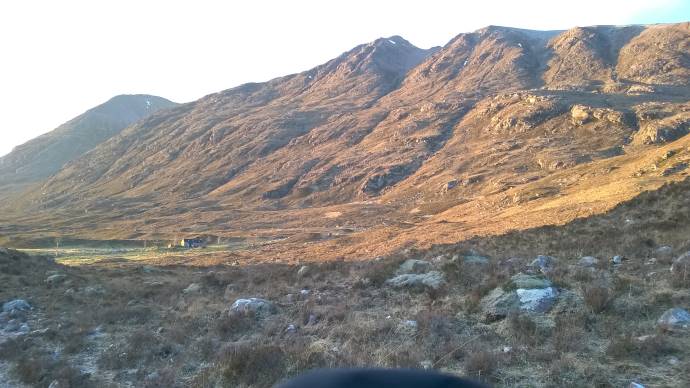 It seemed my colleague was open to the suggestion so we agreed that if the weather continued to be good we would make an early start to try an ascent before heading resuming the trail to Inverlael.

For a Friday night Shenavall, supposedly one of Scotland's busiest bothies, was surprisingly empty - just the two of us. However at about 9.30 when nipping out to take a leak I was horrified to see what looked like more than 20 head torches converging on us from above. When the first of these entered I said how many of there are you? to be met with the reply "just me, that lot are staying outside". It transpired that this was a teacher and class from Gordonstoun school, plus tents. I was interested to hear that such expeditions were part of their formal curriculum.

After a fitful nights sleep wary of what possibly lay ahead we finally managed to get away by 7am. Not only had the bright sunshine returned but unusually there was not a breath of wind. 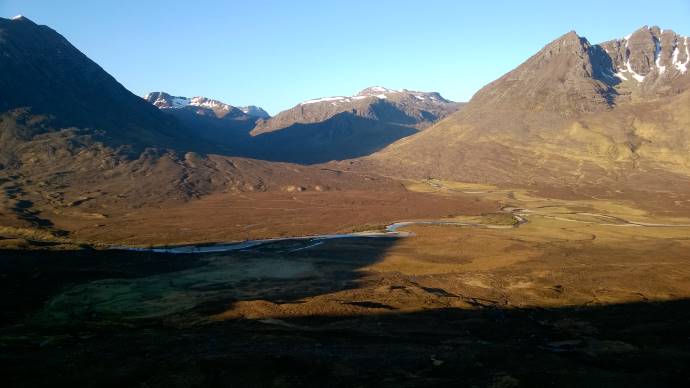 We left our main sacks in the bothy and took a couple of small day packs with us. We followed a direct line north easterly up the nearest gully. It was tough going but after about 30-45 mins we emerged at about 400m onto a gentler slope and began our steady upward traverse. 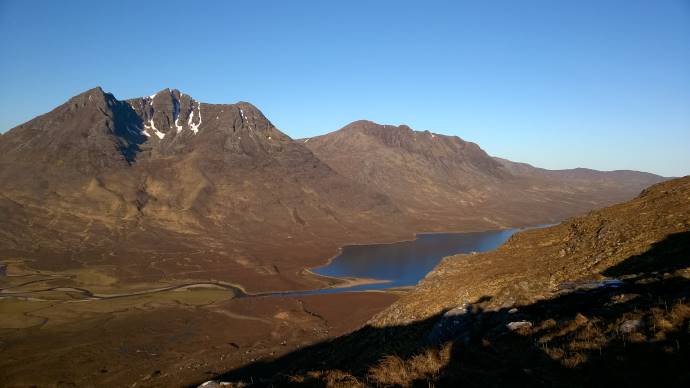 The going was relatively easy and we were not especially surprised to come across a herd of goats. 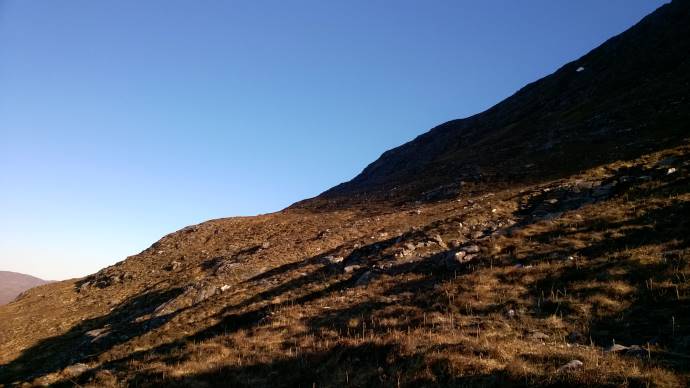 Start of the traverse, solid underfoot

At about 8.30 we started to turn the corner into a dramatic corrie dominated by the 1017m Sgurr Creag an Eich (why is this not a munro top?). 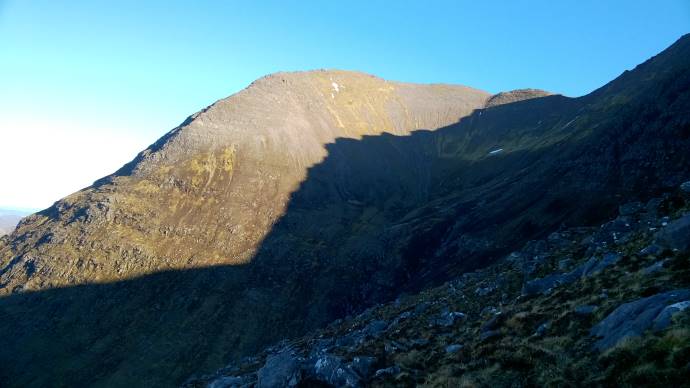 Rounding the corner: Sgurr Creag an Eich ahead

We were now at about 700m. There did not appear to be an obvious route so we hugged the South Eastern side of the corrie until we spied a flat snow patch which seemed to be a reasonable target to aim for. 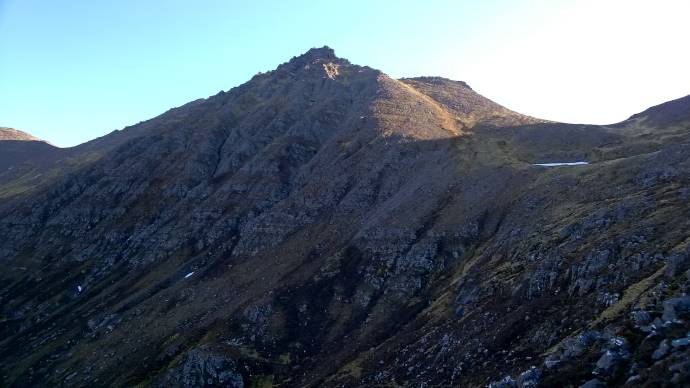 Aim for the white patch

After another 30 mins tough going we emerged at a col which was between Corrag Bhuidhe and Cadha Goblach. We are also pleasant surprised to find a path to which was attached what scarily appeared to be the top of a snow chute all the way down to the loch on the other side. 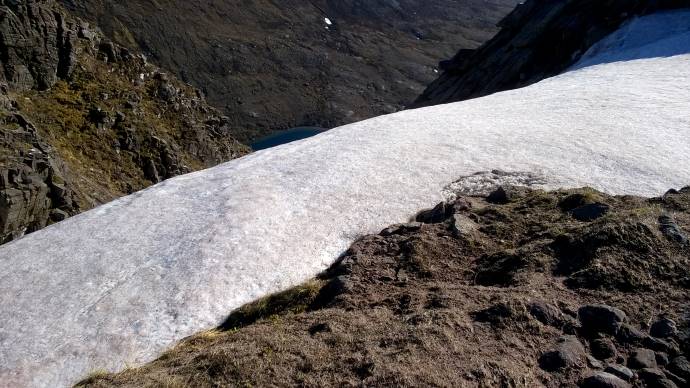 The col. DO NOT step on that snow!

From here we could have conceivably taken the direct path on the ridge but as munro virgins we settled on what appeared to be the alternative safer route which clung to the southerly side of the ridge. Nevertheless clung was an appropriate word as there were some quite exposed parts as it turned several corners. This eventually led to a junction whereby a switchback path on the right led us up to Sgurr Fiona which we summit-ed at about 9.45 - 45mins after reaching the col. 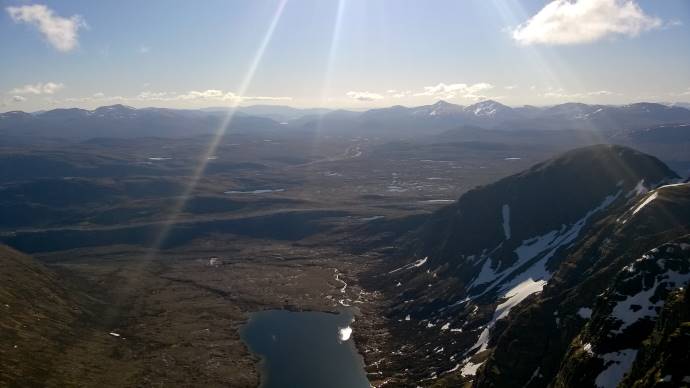 The conditions could not have been better with still not a whiff of wind. We stopped a while to take many photos and also for my colleague to speak to his girlfriend in Marseille, so quiet was it. 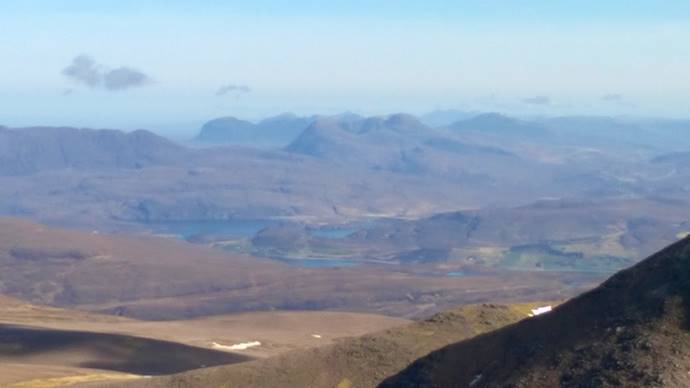 Looking across to Cul Mor and Cul Beag with Suilven behind 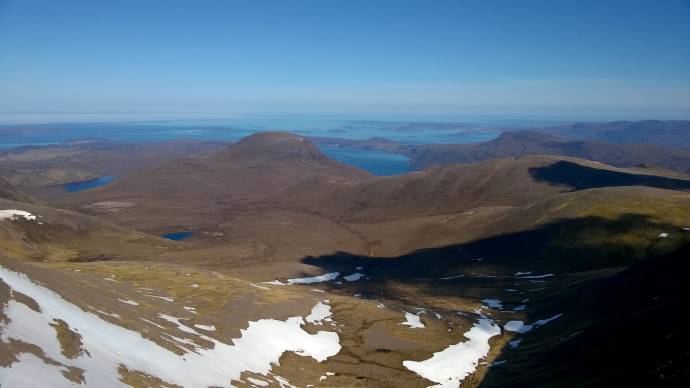 ..and further west to the coast

Having had enough adventure for the day we decided to retrace our steps back to the bothy but this time had the bonus of a stellar view of Lord Berkeley's seat. 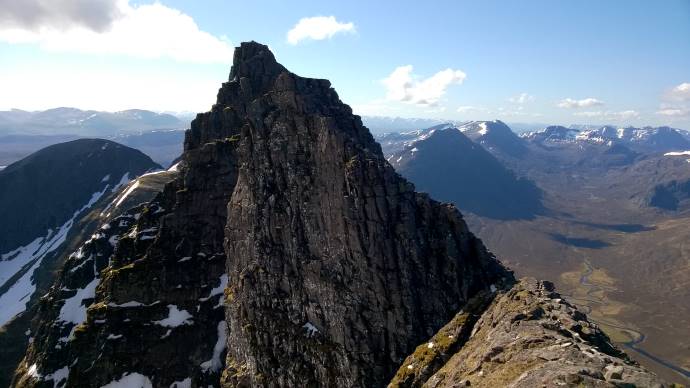 If it had been hard on the way up our quads took a real bashing on the pathless descent and at 11.45am we arrived back at what was now a very different Shenavall now packed with the Saturday morning crowd. After an hour for lunch we resumed the trail on very sore legs arriving exhausted at Inverlael after 7.30pm.

On the way we were able to glimpse the other side of the snow chute on the col and it did indeed fall precipitously downwards for quite a distance. 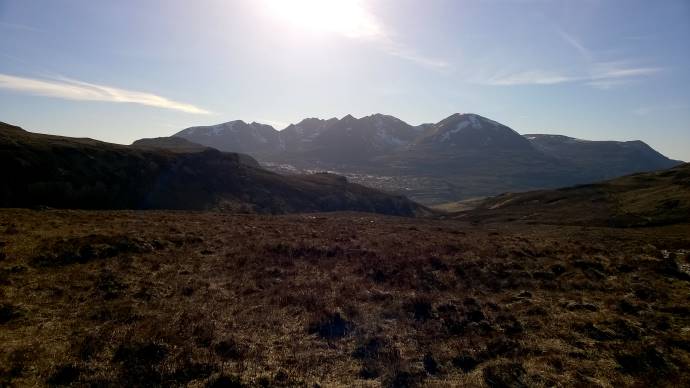 The pull of the fleshpots or rather the curry house at Ullapool was now strong and luckily we soon were able to pick up a ride with the prospect of our Assynt crossing starting the following day.

Sgurr Creag an Eich (why is this not a munro top?)

It is! A nice little ridge walk over to it.

Thanks for putting me right. Glad to know somebody has read the report

Nice one! Wonderful conditions, you were lucky. One of the very most dramatic mountain in Britain.

Looks great. How long would it take to walk from Dundonnell to Shenavall (over An Teallach)?
Planning on staying the night but not sure how much time it'll take to walk.
Looking to walk back to Dundonnell the following day.

bjcarson240688 wrote:Looks great. How long would it take to walk from Dundonnell to Shenavall (over An Teallach)?
Planning on staying the night but not sure how much time it'll take to walk.
Looking to walk back to Dundonnell the following day.

Quickest route would be via the col between Sgurr Fiona and Sgurr Creag an Eich and then down Coir' a Ghamhna. From Dundonnell that's about 10km and 1200m of ascent, so say 5-7 hours depending on your pace and how much you are carrying?