Left Perth around 07:30am. Most of the snow had disappeared from the previous weekend. Though we packed the ice axe and crampons as there was still considerable snow patches on the tops. Crossing the River Connonish at Dalrigh, start of the day! bbrrgh! It was a cold morning! Jack frost everywhere

Followed the path west until we reached a rail crossing, we then walked south towards the Caledonian forest with old scots pine. After following the track for about 1km, we decided that we should be on the other side of the river. So made a decision to cross. I went on through with good boots and gators. Didnt get wet, though came close to a total dunking. It wasn't the day for that, with ice on every rock, so friend Peter decided to take his sock and shoes off and make a more strategic crossing. Brrrrrgh! it must have been freezing. Brave Lad! River that we had to cross with native scots pine all round! A rather cold crossing! Though better than having wet feet all day! Blue feet after that! 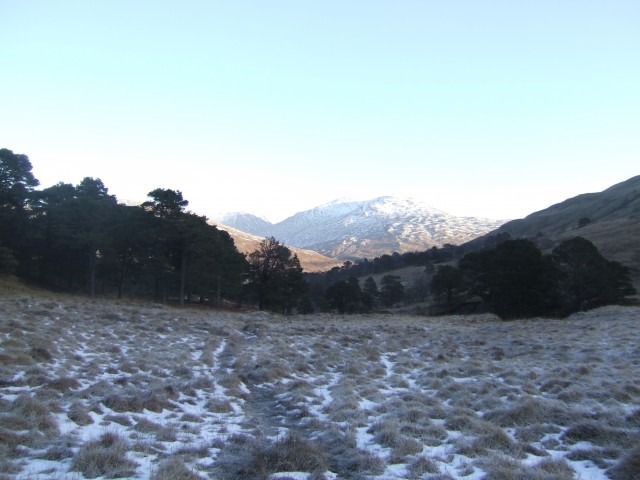 Walking up to Allt Coire Dubhchraig across boggy ground! Lucky it was frozen Walking up next to Allt Coire Dubhchraig watercoure, great views to North, Beinn Dorain on left Time for the Crampons, started to get icy and coire steepening Heading up Steep Snow Chute to top of Bein Dubhchraig Pete on the Snow Great View from the top of Beinn Dubhchraig all round. Glad of the sunglasses with all the snow glare. Nearing the summit of Bein Dubhchraig 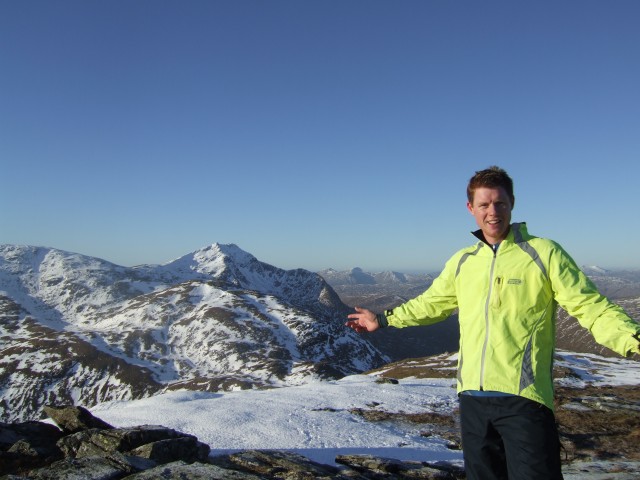 Ben Lui and Ben Oss behind Now to Head to Ben Oss, Ben Lui behind Heading up Ridge onto Ben Oss Summit, view of Benmore behind covered in Snow 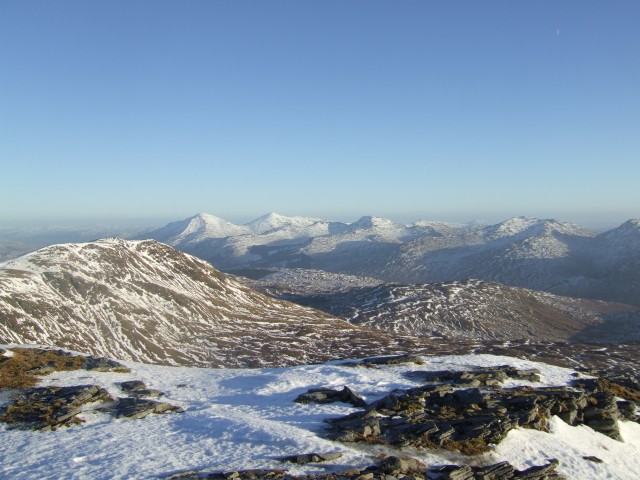 These two hills really where really good, gave great views all round. A long walk back to the car though,as we drop down into Glen and Walked past Cononish farm and road to Gold mine. Was dark by the time we got to car at Dalrigh, easy walking along landrover track though. Got very cold as we arrived at car. Went to the Hotel in Crianlarich for a well deserved pint. Nice place, they even stoked up the wood burner for us to sit and defrost next too. Lots of cool stuffed animals and antiques etc. Cosy place!. Another great Sunday hike

I loved the approach up Cononish as the views just open out the further you go along the track.

Your feet must've been freezing ! Your ascent route on Beinn Dubhchraig wasn't far away from the ridge I descended on the way down when I was up there but I was going back to my bike which I'd left at the end of the track before Ben Lui so I didn't have to wade through the water. The map suggests there's a bridge at Cononish but you'd then have needed to cross all the wee burns to get round to Coire Buidhe which may have been just as much trouble.

We took the same ascent route to start and didn't have to wade any rivers - there were bridges across them all which the normal path takes - you must have missed them somehow! I'm also surprised you went up what appears to be the middle of the corrie instead of up the ridge to your right as that is much easier - granted, you might not have wanted it too easy and might have fancied the steep climb up out of the corrie... Some good photos there. I really loved that walk. And I always wade rivers nowadays instead of risking getting wet feet all day. You'd think the freezing rivers would make your feet cold for the day but it actually makes them warmer for the rest of the day as your blood supply to your feet goes completely mad afterwards!

What was that descent to the Cononish like? I thought that side of Oss looked a bit too steep for me for a descent...

. Don't fancy that river crossing for one second though - not sure I'd ever get my feet warm again

Honestly, they warm up more or less as soon as you get out and start drying them... Then they go red-hot for the rest of the day.

mountain coward wrote:Honestly, they warm up more or less as soon as you get out and start drying them... Then they go red-hot for the rest of the day.

Yeah, maybe MC, but that crossing had to have hurt like hell!

Nice report Jelly - good to see another Fair City poster on here. If you're ever back to do Dubhcraig again, I'd highly recommend crossing the railway and then bearing straight up onto Fiarach before cutting around and ascending Dubhcraig from the opposite side.

Certainly hurts at the time but I prefer the pain of freezing water to the pain of feeling the rocks under your feet! But I still can't see where a river crossing was necessary on that route... did you guys turn left out of the carpark?

We did turn left and cross the river Cononish, after that we followed the landrover track up the hill over the rail bridge, then we past a bridge over smaller watercourse that is now in a very bad state of repair, so followed the watercourse further up, looking for a shallow place to cross. I went through ok, good boots and gators, though was more of a mad dash

Rocks very slippy,and i could have taken a dip, thus friend decided to take his boots off and walk through slowly. Route we took was fine, especially with the boggy section being frozen, so made for easy going. Decided to take the steep route up to Beinn Dubhchraig, as we both had crampons and wanted to test them out, made for a good hard calf-burning work out!. Just the ticket!

Ah, I know the spot you mean - we just used the rickety bridge - it was okay - wasn't many months ago...

Good report Jelly.
Nice pictures of Peter crossing the river.
Photos fantastic - I'd wish I decided to go.
I now have crampons so no excuses

Excellent report & great photos, thanks for that!