I think catching up with trip reports gonna take me longer, much longer than any hike. I must, I must, use less words! No, much less!

This was an ambitious trip to Glenfeshie with Big Jasper and Fast Lawrence, to try to knock off these four hills. Forecast looked braw.
I remember dilemma about footwear, as I had yet to break in new boots. Had a pair of walking shoes, which I thought would do the job, though the heel in one was a bit out of shape. Big mistake!
It seemed like a long way up from Glenfeshie. Before we got to Sgor Gaoith, I was feeling the heat, most worryingly at back of my heal. Great views at the summit, over Loch Eanaich. Pics don't do it justice. 
Had my first fallout with Jaf, of the day. He wanted a more direct line to Monadh Mor. I had plotted a wider detour, in case of poor vis. Anyway, he was proved right again

By then I had bigger things to worry about as blister obviously getting worse and only about a quarter of trek done. Can't believe it! And a lot of sweary words. Was all for chucking it. Guys tried to get me to give it longer, but it would be a long way back, the further out we went. Put on several "compeeds" (sorry about the adverts) and a bit of extra padding. Decided to carry on a bit, at least. Seemed a long way out over the Moine Mhor, to MM, though not a great amount of ascent. 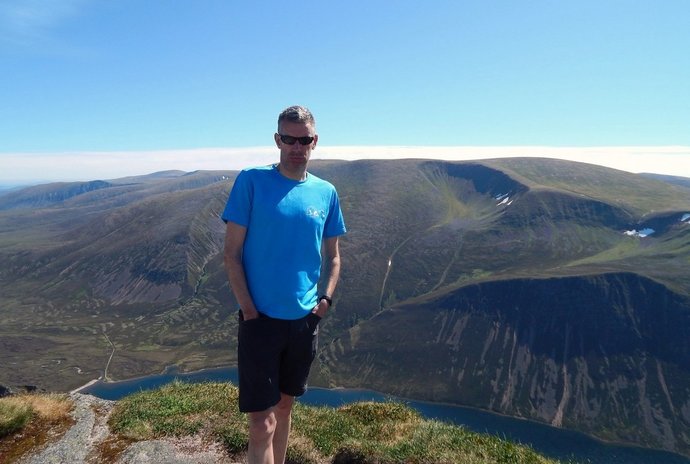 On our way across the Moine Mhor. The lads have that "what's keeping ya?" look :)

As we reached the summit, three folks moved off. We must have been sweating awful, judging by the warmth of their greeting. Got the impression we were intruding on something kinky, but maybe that's my kinky imagination

They moved off a hundred yards and ate their grub there. Over the Bod an Deamhain, to Carn a' Mhaim. Beinn a'Bhuird, way in the distance. From the bealach between Monadh Mor and Beinn Bhrotain, over Devil's Point and Ben Macdui. Made it as far as MM. No going back now.

Having done MM, thought it's almost as far to retrace steps, as to continue the loop, so I carried on with the lads. Beinn Bhrotain, was a tougher/steeper proposition, quite bouldery, but didn't hold up lads too much. Some nice views, getting more into the mountains. Lawrence on Monadh Mor, 1113m. Cairn Toul and Braeriach hills behind. Much more spectacular from the other side, as we were to find out.

By now, I think Lawrence was playing nurse maid, as he kept me company, heading off on the long haul to Mullach Clach a'Bhlair. Again, I had different ideas to Jasper, though my heel had at least something to do with that, perhaps. As is his usual strategy, he had plotted a straight-ish line, to Mullach Clach a'Bhlair. It was quite stony and I didn't fancy the straight up bit, after the straight down bit Jaf and Lawrence, on Beinn Bhrotain, 1157m and highest of the four. Lawrence and I stuck to the path, down to the bealach. By now BJ, was already down in the Glen and no stopping him. I took a longer, less steep diversion, way down by the Allt Dhaidh Mor, then traversed round tthe slopes of Cnapan Mor, to cross the River Eidart.I can't remember how we forded it. If we had to take boots off, or what? Still some large pockets of ice despite the month, and the hottest summer in ages.

By now heat and fatigue really taking it's toll on me, though sore heel and dented morale, not helping either. Told Lawrence just to batter on, catch up with Jesper. No point him getting roasted and toasted, while listening to my moans any longer

Coming out of that depression, the physical, as well as the mental one, was tough going. The other two were well ahead by now, but at least the gradient had eased off, with a Land Rover track to follow. Funnily enough, met a guy up there, with his Land Rover

Unfortunately, he didn't offer lift to catch up with the guys. I don't think they had to wait too long at the summit, as I tried a hurry-up, but I guess it must have felt like ages to them. Mullach Clach a' Bhlair. Even the lads were needing a wee sit down. That's me near done in, summit, Mullach Clach a' Bhlair. Sgor Goaith, in distanc, where it all started to go wrong :) Not on yer Nelly!

Very long and steep descent down the road and even longer trek, back alongside the River Feshie, to the car. A nice spot on the River Feshie.

Pleasant it may have been, but murder it was, though I made it!
A very long day, not helped by blistered foot, but how I enjoyed the tinnies on the trip home Me and Charles, SG.

Pano from Beinn Brotain, round to Cairn Toul.