Ever since our evening in Gleann Suileag Cottage at the start of January and our bagging of the Fassfern hills either side of that evening, Kev and I had been discussing the possibility of getting another bothy night in before February was out. After a couple of false starts, we eventually settled on the weekend of Saturday 16th and, other than a late change of the bothy night itself from the Friday to the Saturday, it was all systems go. After some deliberation, we had chosen Luib Chonnal beyond the upper reaches of Glen Roy with the principal targets being the imaginatively named pair of Corbetts either side of Gleann Eachach.

We both managed to get away from home between 10 and 11 with a view to picking up some hills further down Glen Roy before heading to the bothy. I met up with Kev at the small parking area in Roybridge, just at the turn into the Glen Roy road itself and we decided to head for Leana Mhor West and the neighbouring Corbett of Beinn Iaruinn, despite Kev having previously done the latter. On that occasion he had managed to overlook the fact that there was a Graham right next door and had also scaled it by an improbably steep and arduous route straight up from the road. He was up for a repeat, given that the East side Graham-Corbett combo would probably take longer and leave us very short of daylight for the walk in to Luib Chonnal.

Once parked up on the verge just beyond the bridge almost due east of our target, we quickly suited and booted and headed off up the clearly defined broad nose on the east side of the hill just to the left of the little narrow Coire an t-Seilich. Travelling with no packs we made good progress of the rough slopes and soon had sweeping views up and down Glen Roy. We spotted two figures descending off the summit and down towards the Allt a' Bhreac Achaidh before the gradient started to ease for the pull up easy slopes onto the broad summit plateau with developing views ahead towards the high peaks of the Aonachs and Nevis Range. The Corries, Aonachs and Nevis Range from the summit of Leana Mhor From the summit we dropped north over some rough ground to the bealach with Beinn Iaruinn and then the steady pull up into the Clag Zone. Despite the fact that this would be Corbett number 99 and, as Kev pointed out, 99 being a number associated in Italian culture with all things nice (99 anybody?), it didn't look like it was shaping up to be a particularly nice experience, particularly once we became shrouded in thick clag as we began to level off onto the high ground around Coire nan Eun. Leana Mhor from the ascent of Iaruinn Into the clag - not looking promising!

But then the weak, February sun got it's act together and burnt through the clag to reveal wonderful views along the summit plateau, over Coire nan Eun and across to the Loch Lochy Munros to the north west. Maybe I was going to get that 99 moment after all! Looking back south from the rim of Coire nan Eun Kev silhouetted at the summit of Beinn Iaruinn And without Kev spoiling it! From the summit we carried on a short distance beyond the edge of the coire before dropping steeply down the rough heather slopes to the floor of the glen and a short yomp back along the tarmac to the cars. Carn Dearg and Leana Mhor East with the Parallel Roads standing out, Roughburn Munros in the background Across Coire nan Eun from the descent back to the road Then it was off up the glen to the parking area just before Brae Roy Lodge where the luxury of walking without packs came to a shuddering halt as we donned overnight packs crammed with coal, wood, whisky and beer for the 5 mile yomp along the track by the River Roy to Luib Chonnal. Falls of Roy in the gathering gloom

Beyond the Falls of Roy the track does a fair bit of meandering and climbing before eventually dropping down towards our destination. By this stage it was becoming quite dark and Kev eventually resorted to donning the head torch before we made it in. A few major sections of bog and tricky crossings had to be negotiated before we turned off on the grassy path that leads to the bothy, Kev's head torch eventually picking out reflections from the flashings on the roof of the building just as we were beginning to fear that it may have vanished off the face of the earth. We climbed the stairs to the main room in the attic and quickly got settled in to the routine - crack a beer open, get the fire going and get some food going. We got the stove going no problem at all but it very quickly started belching out vast quantities of smoke into the room. We tried fiddling with various bits of metalwork and shutting the door, but still the smoke poured out of the thing. We were practically blind and fighting for our lives! At one point I remarked to Kev that I now had some sense of what it must feel like to be caught up in a major house fire! Fortunately it was a mild enough night outside so we sat with a couple of Velux windows open for ventilation. Sitting down was generally bearable but standing up involved ones head being in the smog and being reduced to a quivering, spluttering wreck. Eventually we figured out that once the fuel load had burned down a bit, the smoking became less of an issue (at least the smoking from the stove did, not sure about the smoke coming off Kev's boots!) and that carefully placing one log at a time meant less likelihood of death by smoke inhalation. We developed a routine of putting fuel on and then either hanging out a Velux window for 10 minutes or so or going and standing outside. A great night of TV ahead 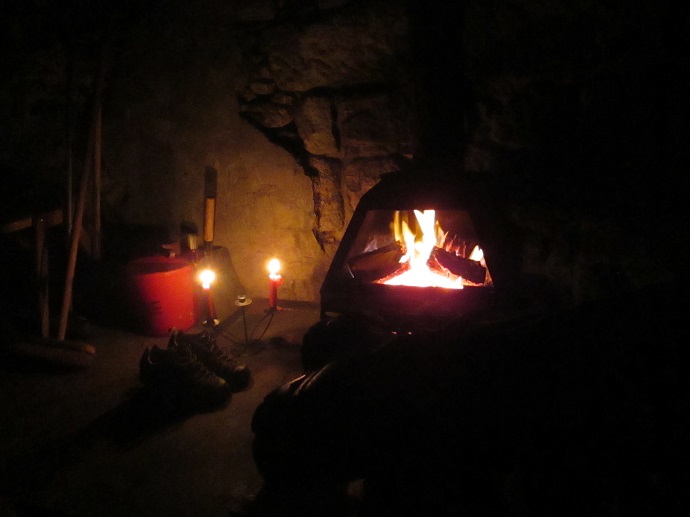 Despite the dense, acrid smoke filling the room, a decent old night was had until the 10% Raspberry Big Dog Chew combined with the effects of smoke inhalation seemed to render Kev incapable of coherent thought or movement and he retired to the safety of his sleeping bag on the floor, well below the worst of the smoke. If the smoke doesn't get you, this stuff will!

I lasted perhaps another half hour or so and then could put up with it no longer and also retired. Clearly I slept well as I had only the faintest recollection of the Carbon Monoxide alarm going off during the night!

our_route.gpx Open full screen  NB: Walkhighlands is not responsible for the accuracy of gpx files in users posts
To Lucy, a wonderful hill companion and still sorely missed and dearly loved exactly a year to the day

Thoroughly enjoyable until the near-death experience of being smoked like a kipper. Don't recall much after the Big Dog - here's to Lucy, the best dog.

They have just discovered that cooking a Sunday roast in a gas oven leads to dangerous levels of pollution, so goodness knows what that bothy fire does.Did you try shutting the fire in with a newspaper across the front, so the smoke was forced to go up the chimney and warm it? I think our first house was one of the last estates that Fife built with a chimney so that the Fife pits would have a market for their coal, so I had years of practice before central heating was installed.

Glen Roy is rather under rated due to no Munros, but I like it.

Another entertaining report Graeme. I actually bagged the Sub 2000 and the Graham last year, before contracting a bout of "couldn't be a*sed!" and shelving all thought of the Corbett. Thinking of a return to that one via Glen Gloy (hopefully this year at some point).

Glen Roy is a little gem though and I'll still need to return to pick off the other Leana Mhor and Carn Dearg.

We stayed at Luib Chonnal on the following weekend (23/2) and saw your bothy book description of coal miners which made us laugh. My companion had just lugged a 10kg bag of coal in!

Fortunately he also knew the laws of thermodynamics and metal engineering....after we lit the fire, and were succumbing to the belching smoke, he discovered a lever in the flue above the stove - turning it 90° opened some sort of valve, there was a whooshing noise and suddenly all the smoke disappeared up the flue. A very warm and pleasant evening then ensued, candles (that I'd brought in) burned to the base. We left about 3kg of coal, plus a firelog.

What a pain you got smoked out! I thought it was a great bothy, a great location too.

By the way, I also went over the Carn Deargs on the way out, but looks like better conditions than you had. This meant I was able to spy a dry (peat-hag free) line along the south side of Teanga Mor when I was on the summit of the lower Carn Dearg. I managed to get from the bothy, over the two peaks and back to the car in 3hours. A bit sweaty mind

Hmmm, I did have a fiddle with that lever but whatever I did to it, it seemed to make little difference. As Kev has said, the 10% ale that we were drinking probably had something to do with our senses being clouded!