Well here we go again......up well before the larks and a drive up the A9 into Perthshire on a damp & dreary Saturday morning, not quite 100% sure of what walk I was going to do and on route stopped at the raging Dochart in Killin for a couple of snap shots. My thought when I left home in Lanarkshire was to... as so many do...double up Stuchd an Lochan with Meall Buidhe but as I drove up past Lawers car park the heavens opened and my initial thought was 'what am I doing here'.

I continued on the track through Glen Lyon feeling a bit sorry for myself when turning a corner I was faced with a massive stag about 80 feet in front of me...slowing to a stop with the distance now at approx 40 feet, I fumbled for my camera as the bold beast looked proudly on......he must have got bored as he started to walk slowly toward the forrest edge and then my camera kicked in and I started snapping away good style like I was David Baillie. I continued along the track feeling much better and full of myself for getting some good wildlife shots and continued with more shots as stags and deer were in abundance along with various fowl and highland cattle.

As I reached the road end at Loch an Daimh the rain was still giving it what for so I sat in the car for a while and pondered my options.....call it a day.....not a chance, what about Meall Buidhe on its own....nah! if I'm only going to get one in, then I'll go for the harder of the two.....but I'll wait a bit to see if the rain lets off.

After somewhere in the region of 30 minutes my hopes came to fruition and the rain stopped...so I kitted up and headed across the front (or is it the back) of the dam towards my goal. Oh! almost forgot....I hear some of you saying what about the wildlife shots of stags etc......well here you go What a ****...I had my camera on wrong setting so all the great photo's I thought I had....well you can see the result and this was the clearest of them....I wonder if it would look ok with 3D glasses. Looking back at the dam

I picked out my route and set off Start of my assent As you can see the weather turned out for the better, but the further up I got the temperature was dropping dramatically as a bit of a chilly wind got up from the south and was threatening to blow some rather dark clouds my way...so as I homed in on the summit it was time for another layer before the final stretch. Looking down upon Lochan nan Cat with summit in site

After exchanging pleasantries with gentlemen from Denny we swapped cameras for the I did it shots and swapped back again (obvioiusly) for the summit scenic shots. The I did it shot...eh! no it's not a cross between sheep & labrador and eh! it's not mine either Looking down at dam on Loch Lyon..cloud really drifting in now 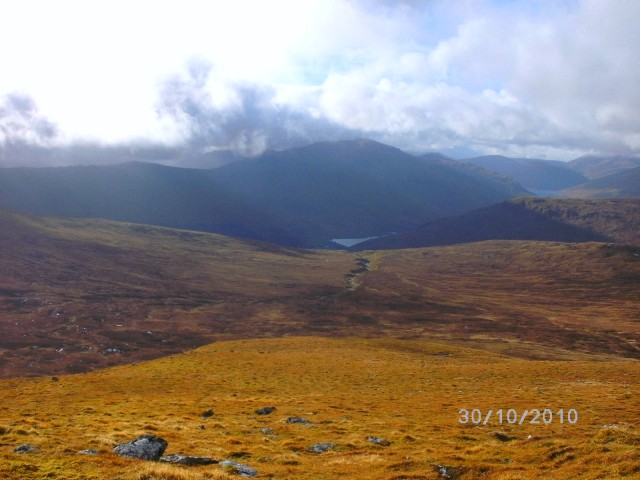 I think possibly Meall a Chall sitting above Loch Lyon

OK time to head back down to the car for some untouched lunch and a cuppa.

On way home heading back down the Glen I stopped for another couple of camera shots of possibilities for future outings.... I think first pic is the dam at end of Lochan na lairige with Creag an Lochain towering above and second pic.. I believe this to be looking up towards Meall nan Tarmachan... Interesting route from your map as you'd probably more normally go up to Sron Chona Choirean and then head west to the top of Stuchd an Lochain whereas you seem to have skirted tightly south round the lochain and then up the steep bit. Looks like it would have been very scrambly !

rockhopper wrote:Nice trip - pity about the stag but you can still make out much of it

Interesting route from your map as you'd probably more normally go up to Sron Chona Choirean and then head west to the top of Stuchd an Lochain whereas you seem to have skirted tightly south round the lochain and then up the steep bit. Looks like it would have been very scrambly !

You're right Rock'r... route on map seems to have moved a bit when it has downloaded, I definately didn't go that route... my route was from approx' 20mtrs past boat house and straight up (as in pict0088) where I caught a track and then along fence line following track pretty much most of the way there and same route back, albeit I was on my backside a few time on way down.

Bruadair wrote:albeit I was on my backside a few time on way down.

I came down that nice ridge on the right of your pic of Lochan nan Cat (the northern ridge on your map) - was quite nice - the walk back round the main loch shore was a bit too bouldery to be much fun though - only looked like a slightly stony beach from above!

Was really nice going to Lochan nan Cat though - it's in a beautiful corrie - shame I forgot my camera that week!

That poor stag's so cold and wet it's shivering too hard to focus on it!