This was my 7th Munro, but it was this one that started it all off. At the age of 18 months after a bout of illness my Grandson was diagnosed with a brain tumour in October 2009 and was admitted to Schiehallion ward in Yorkhill Hospital where he remained whilst undergoing chemotherapy for approx' 9 months.

Due to the care shown by staff in the ward my son and daughter in law wanted to give something back to the hospital and desided on a number of fund raising events of which scaling Schiehallion was one......so I threw my hat in the ring for this event. So with his chemo sessions complete albeit he was still not clear and had to undergo radiotharapy my Grandson was released from Yorkhill and a date of 6th November was set for the fund raiser.

On a crisp Saturday 6th of November morning (early) I set off to meet my son, daughter in law and her father at the Braes of Foss car park for our walk up Schiehallion. Snap taken on route as morning mist settles between the hills Looking down to car park

After a bit we did the stop for some photo's breather thing that us less fit folk do. 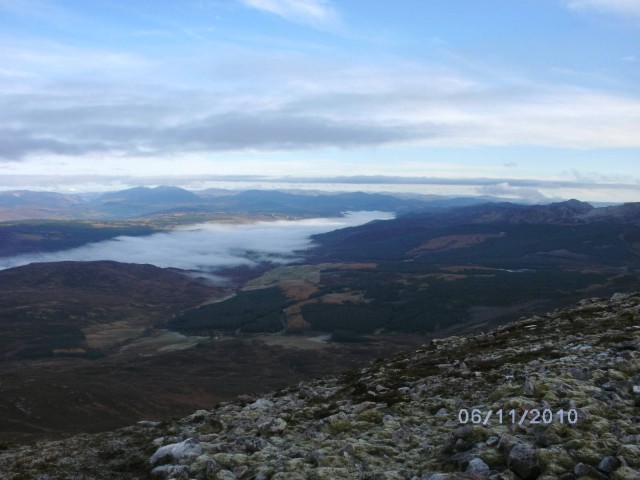 Time for another photoshoot breather thing, with the summit looming up ahead Do we have to go away up there...I'm not looking, I'll take a few photo's instead The whale back beckons

As we got further up the boulder field the rocks were covered in frost and quite slippy, Natalie found to her embarrassment as she slipped and gave herself a sore one.....not that she admitted it..... and she was fortunate to land between a couple of jagged rocks rather than face down on one. Barry & Natalie at frosty summit cairn...anyone think she is a Minogue-a-like And not to be outdone...yours truely

After a spot of lunch and a hot cuppa...it was time for the traditional summit scenic shots... ....The cloud was starting to roll in as we started our decent so it was back down over the boulders which by now were giving my knees jip.... A view of Schiehallion from hotel and out across Loch Rannoch

...and again from a little way down the road... Back at the hotel and young Aidan looking none too happy A view over Dunalastair Water and Schiehallion Summit shrouded in cloud

.
That's it fund raiser over and a drive back home with football on radio for company............as a point of interest, in aid of Yorkhill Childrens Hospital... £10,000 was Bary & Natalie's target to the aim for from all fund raising events and after Schiehallion it stood at £21,676.32...so well done to them both.

wow, very inspirational read, congratulations to all of you

, hope its the start of better things for you all

I must've missed this first time round. We all have our reasons for getting into walking but yours must take some beating. Congratulations and well done !

Well done on raising so much money, I hope your grandson continues his recovery and that other children at Yorkhill can benefit from the money you raised as well.

Fantastic, that is some total that your family raised for Yorkhill hospital, im sure a lot of kids will benifit from this fantastic, mamouth fund raising event.

Wishing you and your family all the very best for 2011.