I normally write long, rambling trip reports. I sense another coming on, even though this one was a wee while back. We, me and my wingman, Big Jesper, had decided on Braeriach, along with good buddy, Lawrence who also brought along his chum, Bob to share the fun. Hopefully you're now friends again, lads

Jaf, as usual was keen to conquer everything in sight and then some. I knew the iconic traverse would be more than enough for me, so I said "I'm out," at the suggestion of also doing Carn a'Mhaim. The others would chew on it plenty, as we made our way in from the Sugar Bowl car park. The forecast was good, but initial signs weren't too promising due to low cloud. Hopefully the sun would burn that off. 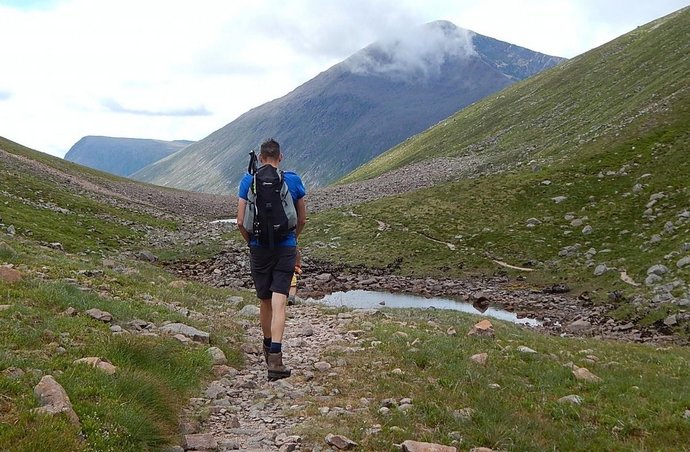 Enjoyed the banter along the way, as we made it to the Chalamain Gap. Boy, that is one strange feature of nature. Not the sort of place to be letting your attention wander from your next step. (Bonus point for anyone who can explain how/why it got its name? - I get the second part!) 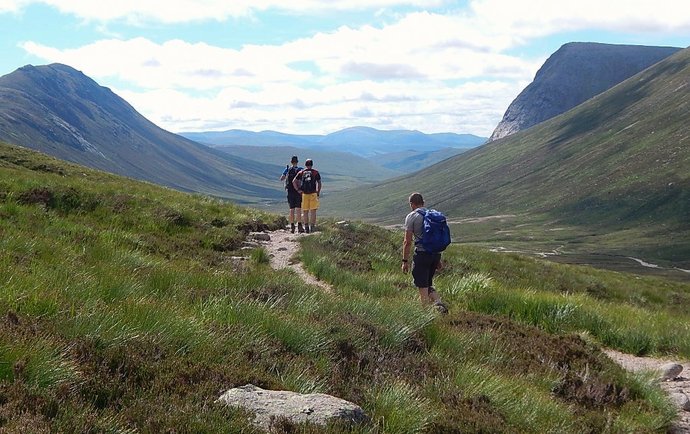 Soaking up the view. Toward Glen Dee. Carn a' Mhaim on the left, Devil's Point, to the right. I chose to leave Ca'M to the hero's!

Was still very murky, with limited vis, as we progressed along the Lairig Ghru. Couldn't see much of any features at all.
Bob was handling the pace of the whippets, no bother and was probably thinking these lads from Argyll are nae so bad. Little did he know that one of them is quite bad

Passed the Pools of Dee, one the two sources of the River Dee. Gradually beyond there, the fog began to lift. Jeezo! That looks like one big mountain, as something huge emerged! So far the Cairngorms hadn't totally set my heather on fire, but this looked pretty awesome. That feeling just grew as the mist vanished. Stopped near the Allt Clach nan Taillear, to refuel and make minds up. As said, mine was already made up. In the conditions it was too good for Jaf, not to add in Ca'M. Lawrence, being a masochist, was never going to refuse, either. Was probably a tougher call for Bob, as he would have been less sure of what might be involved, but these Argyll lads are decent guys, right? Looking back up to Braeriach and Coire Bhrochain, from the Clach nan Taillear. Macdui, rising on the right.

I was more than comfy at heading off myself, knowing that I could go at my own speed, conditions were now excellent and the lads would steadily catch me up, despite handicap of throwing in an extra hill. The Devil's Point, originally known as the Bod an Deamhain, which, as all you teuchter's will know, means "Penis of the Demon". Supposedly the English version came about when Queen Victoria asked her ghillie, John Brown, to translate, he came up with the Devil's Point!

Made my way down past the Clach nan Taillear, the Stone of the Tailors, where according to local legend, it was behind this rock that a group of tailors died in a blizzard when crossing the Lairig as part of a wager. From there it isn't too far to the footbridge over the Dee, to Corrour Bothy, all the while, marvelling at the steep cliffs of the Devil's doodah! Seemed to make decent time up the bealach, then over to the summit which is relatively easy. Another fine view, from the Devil's Point, back up the Lairig Ghru to Lurcher's Crag.

Enjoyed taking a regular glance over to the ridge on Ca'M to see how the lads were progressing. They seemed to be charging on, whereas I was merely strolling

Took my share of photo's. Great views in all directions. This is what the Cairngorms is about. Attention then diverted to the next one, Cairn Toul, which seemed disproportionately big, compared to the diminutive Bod an Deamhain. Looking down on Corrour Bothy, from the Devil's Point. It's a fair climb round Stob Coire an t-Saighdeir and then up to Cairn Toul. Noted another guy ahead of me, taking a much different line. Kept looking for the lads. Lost track of them after the summit, but knew they'd be chasing me down

Enjoyed the summit of Cairn Toul. Amazing views, but I was to find that applied everywhere on this route. The other guy was just heading back down, so had a blether with him. Asked him if he met my mates, to ask what was keeping them and sure enough he did! You can't beat a good wind up Another shot back up the Lairig Ghru, the highest point of which is a mere 2,740 ft. Back over Stob Coire an t-Siaghdeir, to the Devil's Point. Beinn Bhrotain, beyond. Pano of ridge from Cairn Toul.

Next stop is the Angels Peak, Sgor an Lochain Uaine, a twin to Cairn Toul. Just like the Devil's Point, there was no signs of Angels, just superb views over Lochan Uaine, An Garbh Choire, etc, etc. Lochan Uaine. How does it then become Sgor an Lochain Uaine, gaelic fans? :) Lochan Uainie, from the Angel's Peak. Looking back to Cairn Toul, from the Angel's Peak. Still no sign of the lads :)

By now, I thought I would have the bloodhounds in sight, but still no sign of them. I was starting to feel the pace, but any fatigue is forgotten in such surroundings. I continued the traverse Garbh Choire Mor, past the other source of the Dee, the Wells of Dee and somewhere along the way, spotted the three amigos on the summit of Cairn Toul. Not doing too bad for three old men

Panorama from Braeriach, round to Macdui and Cairn Toul, 3rd, 2nd and 4th highest in the land. The falls which flow from the Wells of Dee, the other source of that fine river. It's a fairly long, trek round to Braeriach, but mostly relatively, modest undulations. Again, the vista is unbeatable. Was beginning to ponder whether to just wait on the lads, but I thought, it might still be a while, then I would probably have trouble keeping up with them? Macdui round to Cairn Toul & Sgor an Lochain Uaine. The lads on the Angel's Peak. How appropriate :)

Decided just to keep moving. Maybe, slow down a bit. Worked round to Sron na Lairig, which seemed to last for ages
before descending down into the Lairig Ghru, opposite Lurcher's Crag. It seemed like a big climb back up to the Chalamain Gap. The leg's were tiring now. Just a matter of keeping going till back at the car. Flopped down on the ground glad to be finished, wondering how far behind the lads were. About an hour later, they trooped back into the car park, looking pretty tired themselves. Look back to the Chalamain Gap, as the end draws nigh.

That was a bit of an eye opener for Bob, who may not trust these Argyll boys again, though we fair enjoyed a wee tinny, or two on the way back to Crianlarich, despite the fatigue, basking in the glory of having knocked off the 3rd, 4th and 5th highest in the land, plus the lads had added on another, Carn a'Mhaim, to one already huge day!

Great report, and I enjoyed the wonderful weather vicariously (I did this round anti-clockwise, and wasn't free of clag until Angel's Point!).

"So far the Cairngorms hadn't totally set my heather on fire, but this looked pretty awesome." I can completely relate to that: once the clag cleared, the sheer massiness of Braeriach really blew me away.

Thanks for your comments, Alteknacker. Glad you felt the benefit of "my weather." As you say, these mountains should be seen in good conditions, at least once in one's life

I'm another waiting for my heather to be lit

those pics are certainly helping tho, great report