Trying to catch up with reports is proving difficult. Very difficult. I waffle too much 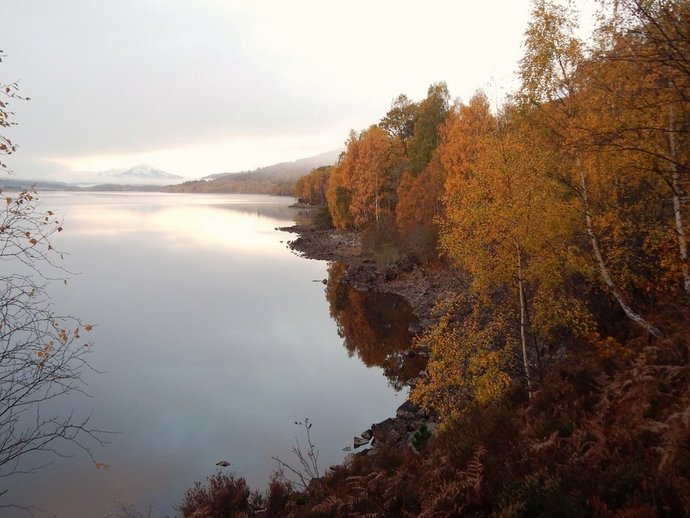 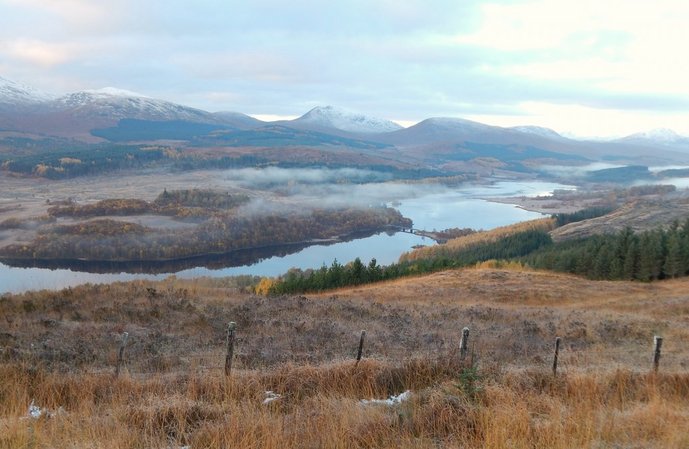 Another stop by Loch Garry. No wonder I was a bit late getting to start point!

Anyway, this time, I had decided to head for Kintail, hopefully get a bit of snow action and visit the Falls of Glamaig. Beautiful trip up from mid Argyll. Had to stop a few times for pics especially at Loch Garry and Loch Cluanie. Beautiful! 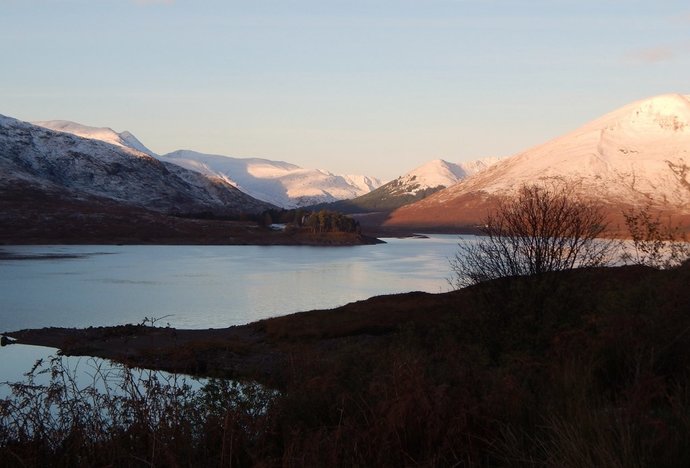 Toward the South Glen Shiel Ridge and Loch Cluanie.

Heading along the road from Invergarry, I was rather surprised and perturbed by the amount of snow on the hills

Did I take my crampons? No! Stoopid!

Getting to Morvich, found the road was closed for roadworks. Knew I wasn't too far off start point, but thought, I could do without that. Another couple were also in same spot and not heading round the long way, so I followed suit. 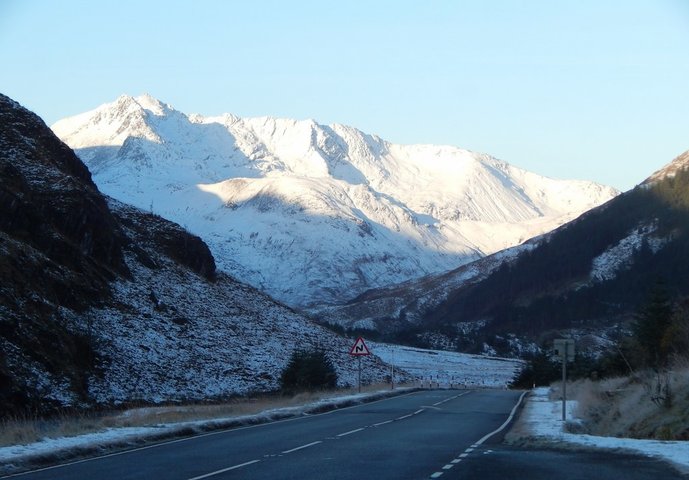 Up to the South Glen Shiel Ridge. 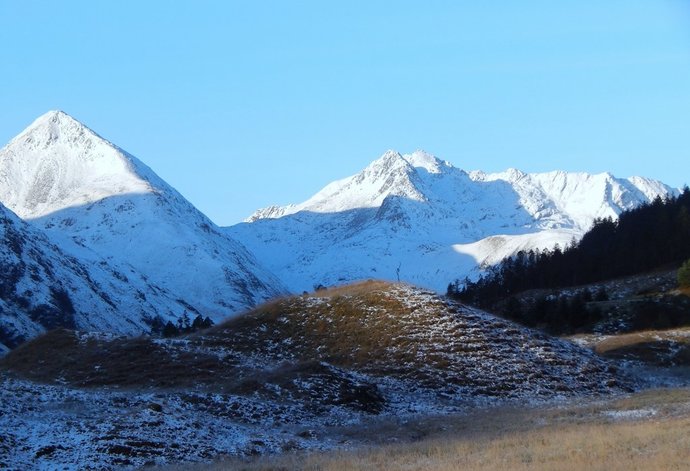 I think this is Faochag, Sgurr na Sgine and the Saddle, Forcan Ridge? 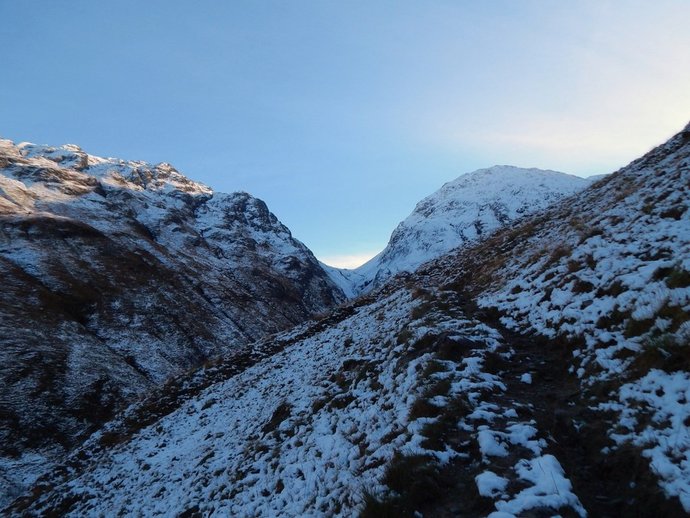 Gleann Choinneachain, up to the bealach.

Made quite fast progress up Gleann Choinneachain. It's good when one feels fit. Also, a very nice glen, though I was soon getting into thick snow. Crossing the Allt a Choire Chaoil was a bit tricky, but managed without a dooking. Iced boulders don't make for fun! The surrounding hills looked majestic as I made for Bealach an Sgairne, with a herd of deer passing down the glen and a guy heading for Beinn Fhada. 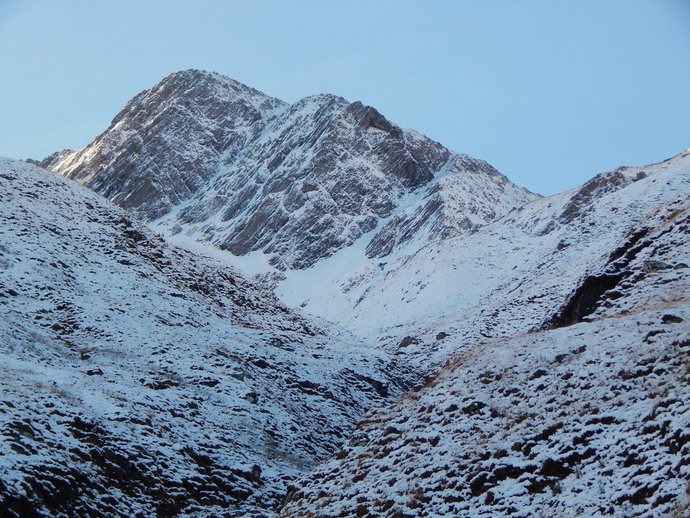 Somewhere in the direction of Sgurr a' Choire Ghairbh, looking quite tasty. 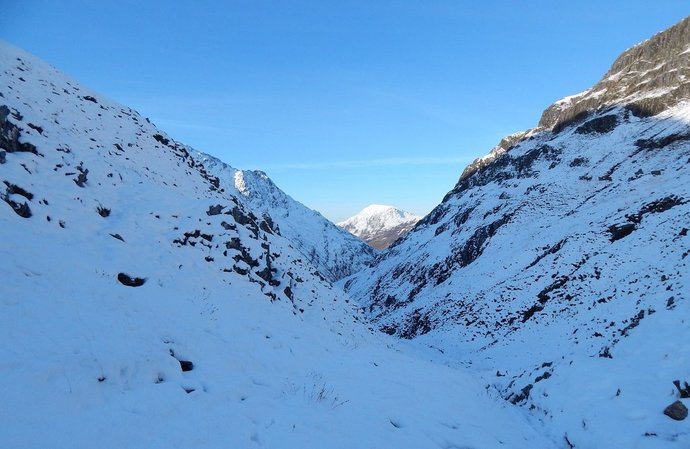 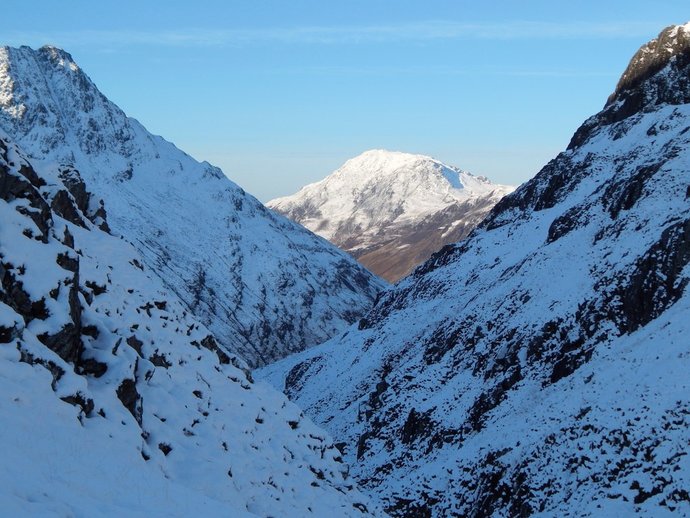 And a closer look.

After enjoying the views to the East, from the bealach, as described, there are more than a few false dawn's on the way to the summit, but the views were superb, out to the Skye Bridge, Kintail hills and further north. I put on the microspikes, but they weren't great help in the slushy snow. 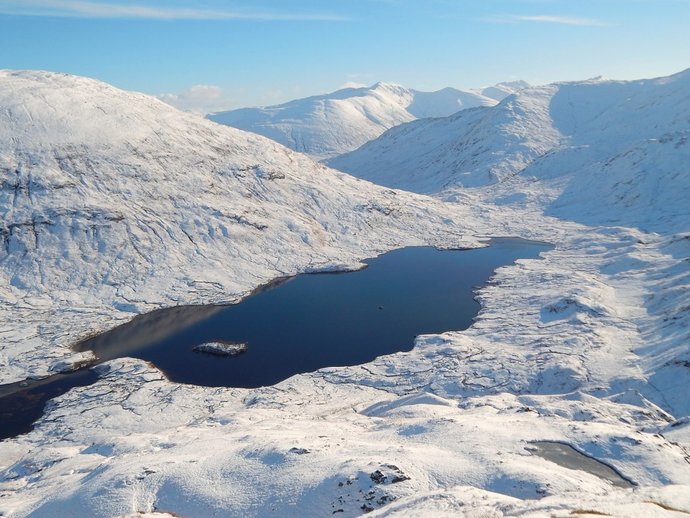 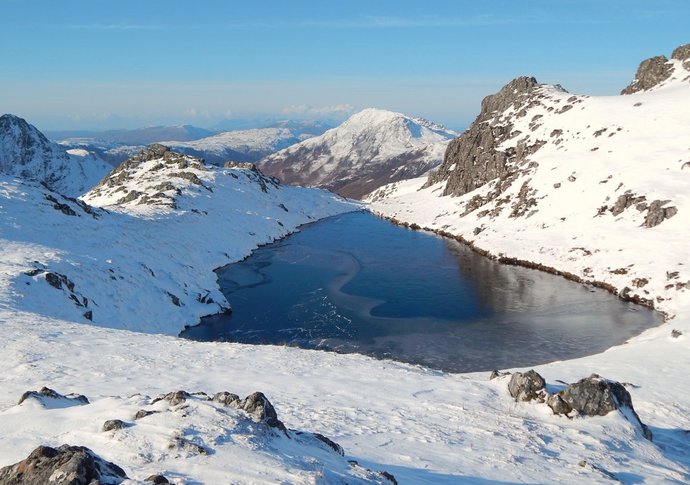 Beinn Fhada, over to left.

Met a couple who had come up the west ridge, so they made the summit before me. I was just leaving the top, when I saw someone heading up my way, so thought I'd take a bit longer to ask about the route. Turned out a young lady and her brave wee dog, from Plockton, I think. Had a nice wee blether, but it was getting cold on the shaded side of the hill, so of I went.
The steep, rocky descent in snow, from here wasn't so much fun to be honest. Had to go very gingerly! 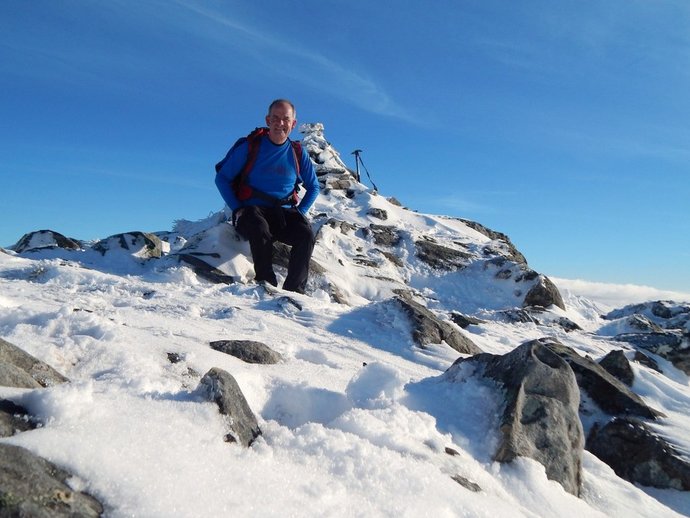 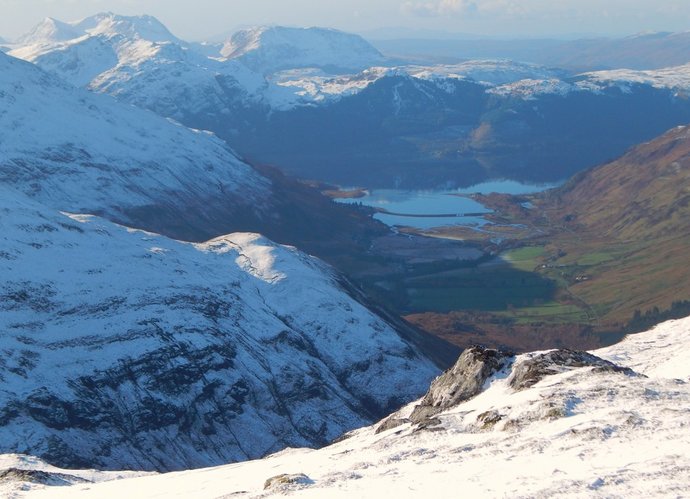 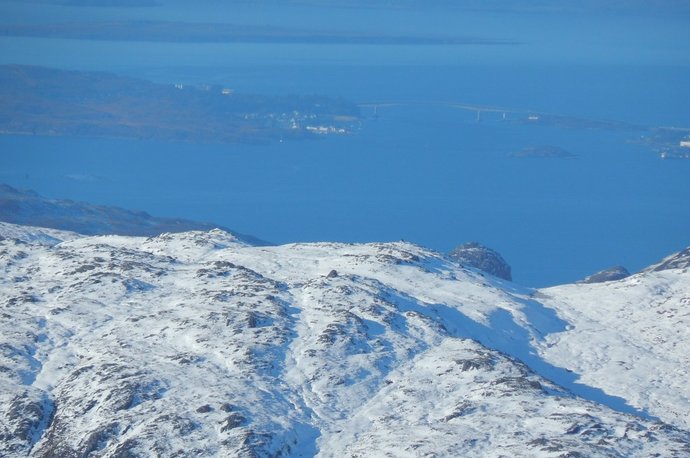 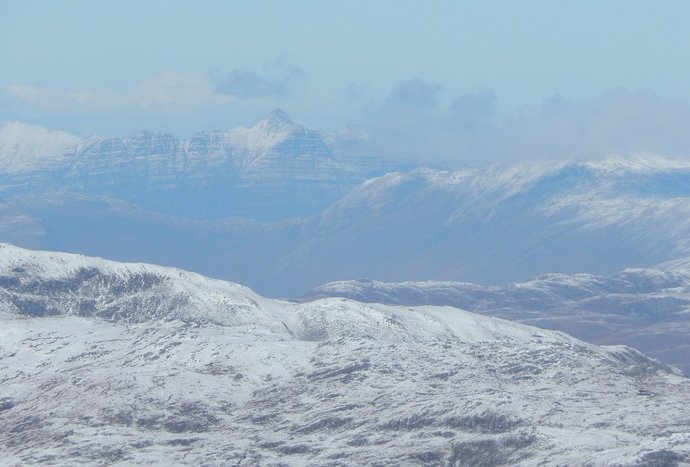 Think that may be Liathach? 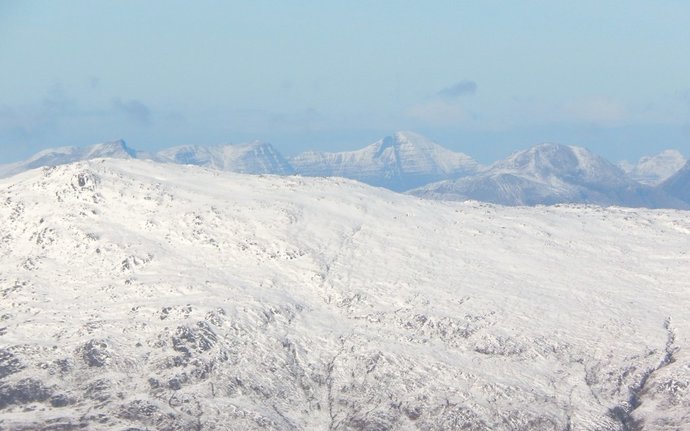 Further down I went a bit off track, taking things too casually and making assumptions, causing more effort to get back on the line. I was then looking for the path to the falls, but thinking I needed a further descent. Instead I had already crossed the snow covered trail. Gradually my mistake began to dawn. I had wasted a lot of time and energy, before the penny dropped, then it still took ages to get on the path at Bealach na Sroine 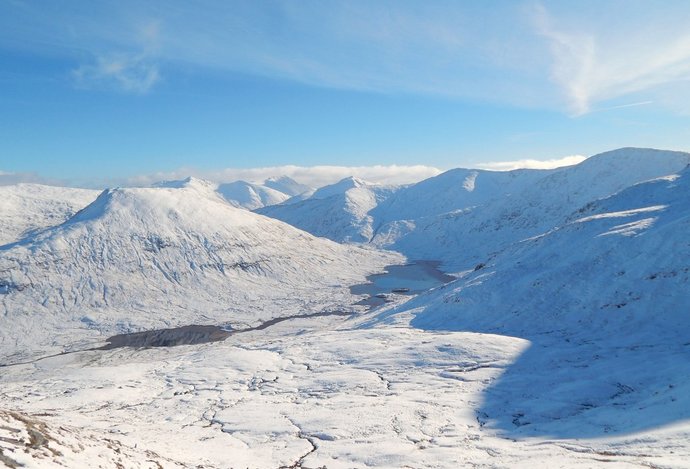 By the time I started to descend to the falls, I was having major doubts about the wisdom of proceeding further, much though it would hurt to abandon plans. Eventually sense kicked in, as light was beginning to dim. Get out of here! Don't want to lose my way, with little time left for the route back out. Back along the track I went. Came to the spot where I had crossed it. Had I been about 20 yards either side, I would have been able to spot the path, but where I crossed was deep snow. Just my luck 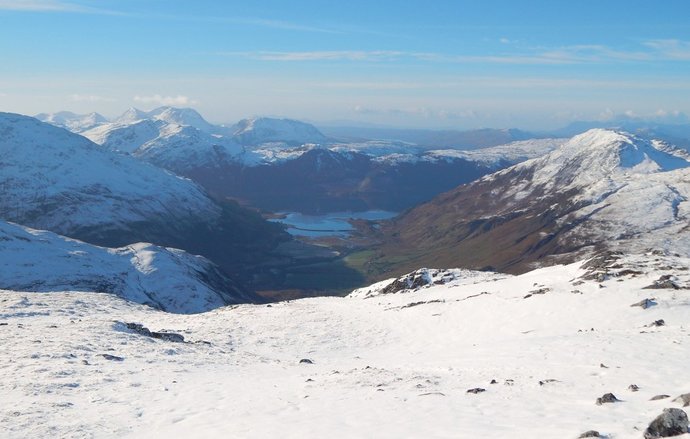 Followed the track down, then onto the forest road, but went a bit off line, at Gob na Roinne, keeping to the right hand bank of the Abhainn Chonaig instead of finding the footbridge, thus I came out at Ruaraich and had a longer walk round to the car, arriving just as sun had gone down. Still, it was one great day! A bit tinged with disappointment at missing out on the Falls of Glomach, but delighted to have got round despite the thicker than expected snow. 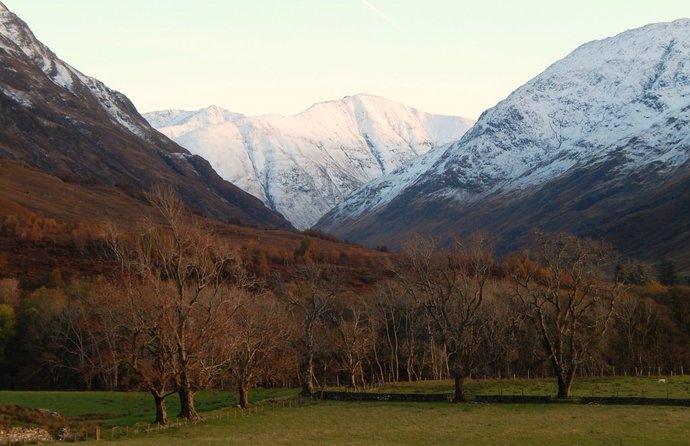 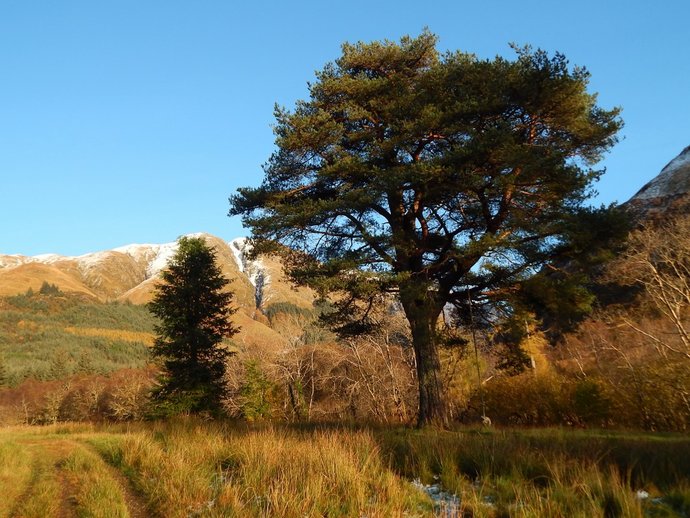 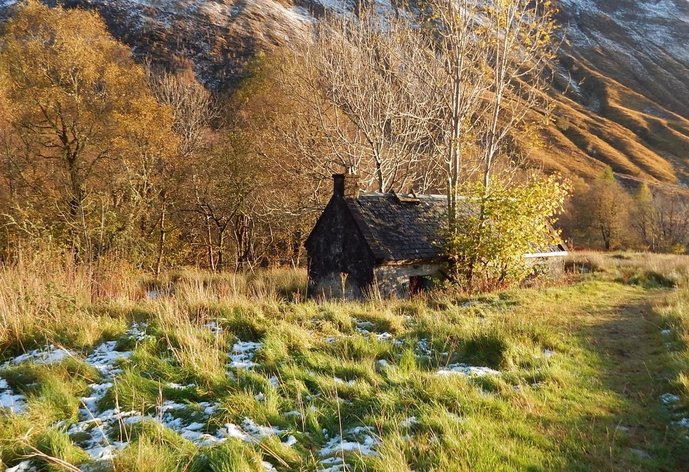 Can't see many snowy shots from this winter

Absolutely Superb! I love Kintail in winter and your photos are beautiful. We have not been up A'Ghlas-bhein and you have me think it should be our next outing if the snow comes as promised!

Thanks, Petr, hope you get the same kind of day. Been a strange winter by any measure.

Glad you enjoyed the pics, Rockhopper. Must have been a great place to camp, but a shame to be in the clag.

Appreciate your comments, all.