Foiled by Freya - I had a grand plan to go down and do the three little hills around Mosspaul north of Langholm, beautifully in the middle of nowhere and yet exactly on the Edinburgh-Carlisle bus route, but the forecast for Saturday was pretty awful, and on Sunday I'd have been getting the bus back after dark, when it was supposed to get wild and windy again.

The original back up plan was Conic Hill at Balmaha, which I foolishly didn't reach the true summit of from the WHW, but it was a long trip across to the other side of the country. So I decided that if I made the Biggar bus I'd do Goseland Hill and if I didn't I'd do Cademuir, and of course I didn't make the Biggar bus, because I never do.

I've walked past Cademuir Hill twice, following the John Buchan Way - the first time I had no idea that the real summit was buried in the trees and fully intended to go up the one you can see, only I ended up worried about getting blown away, and the second time I was just in a hurry to get on and had no desire to vanish into the trees. So that made it a good candidate, but this time I would go in from the tree side, up the road to the forestry car park.

I knew I could take a shortcut rather than going round by the road - down a pend and over the little bridge and across the park to meet the Cademuir road. There were hills around from the start, the Dun Rig hills ahead and the start of the Moorfoots off across the valley, but I was quite a bit up the road before I saw something that seemed to be my objective, looking a bit bald and shabby. I have unfinished business with the hills across the road, and they did look lovely in the sunshine, but they weren't today's objective. The track turning off did have the Cademuir forestry sign at the bottom of it, but it looked a bit like a track to nowhere at first - I was expecting the car park to be much nearer the bottom of it. But there was a place further up - I'd managed to run off without any more map than a screenshot of someone else's route, but I was pretty sure that there would be a Forestry Commission map in the car park - they're good at that - and that it would be more use to me that the OS's interpretation of the forest, which was also the case. Two tracks led off from the car park, but one was the way back and the other not part of the route at all - I had to look elsewhere for my red marker, and found it at the start of a little path uphill. 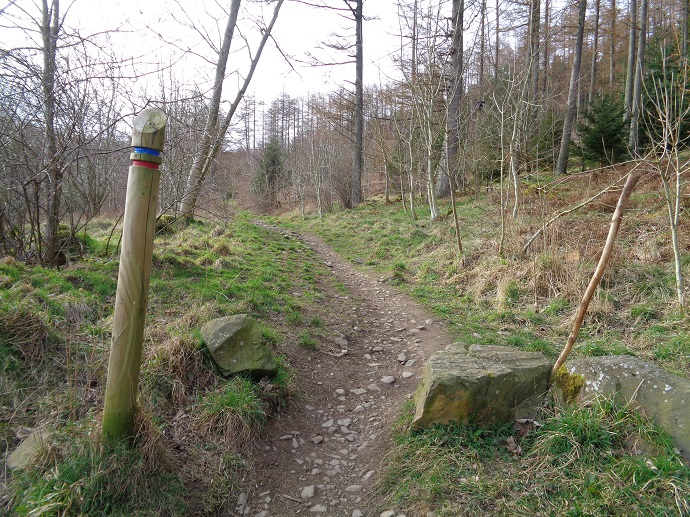 The path climbed steadily for a while, and then turned back on itself in a long slow zigzag, and down below me three deer with white bottoms bounded away into the trees. It was nice here, much more open woodland than in the new plantations on Belling Hill, and more variety of trees. At a junction with a picnic table there were red markers on each of the four possible routes, but I knew which way I needed to go - slanting up to the left again on another leg of the zigzag. This was more of a forest road, and after a while stopped climbing very much, and began to curl itself round the summit of the hill. While I was lower down there had been occasional sounds drifting down, someone apparently shouting instructions to a lot of other people, and a dog getting in a row and then being shouted at itself, but there was no one about now. As the track curved round different hills came into view, over the brown ghosts of larches. Further round the summit path splits off from the track and goes on curling uphill - I did meet one man here coming down. The path goes on through a felled area - it's presumably greener than it used to be, and tiny new trees are growing, but there's a lot of dead grey stuff lying about. For the first time I had a view of the other summit, and hills lurking in the haze beyond - one looming in the distance surprised me by turning out to be Tinto, although I shouldn't have been surprised as it's in sight from everywhere. The summit is fairly flat - flat enough to have a picnic table on it, although there was a cairn tucked away from the side. The weather wasn't bad, given some of the forecasts, but it was definitely cold winter again - not too cold to stop me sitting down and eating a second lunch (I'd succumbed to temptation walking past Greggs in Peebles and bought a sausage roll - an actual one with sausage in it), but enough to discourage too much lingering. But it was a nice spot as far as views went, with hills all around, from the nearby ones around Hundleshope and the start of the Manor valley, to the distant line of the Pentlands. Pentlands in the distance

The path led on down the other side - it has been well made, whatever the state of the surroundings. 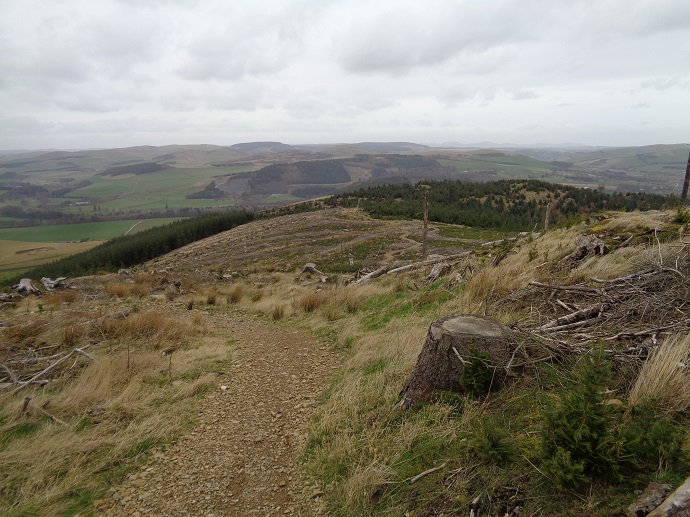 Although I'd been to the true summit I still felt like I'd only climbed half the hill - the map showed the way down almost touching the wall which cut off the open ground, so I hoped there would be a way through, and it turned out to be an easy one with a nice gate. Gate in the wall

Now I was in a completely different place, an enormous sheep field with greener paths wandering through the dull grass, and I followed the nearest path downhill until I picked up the posts marking the John Buchan Way. 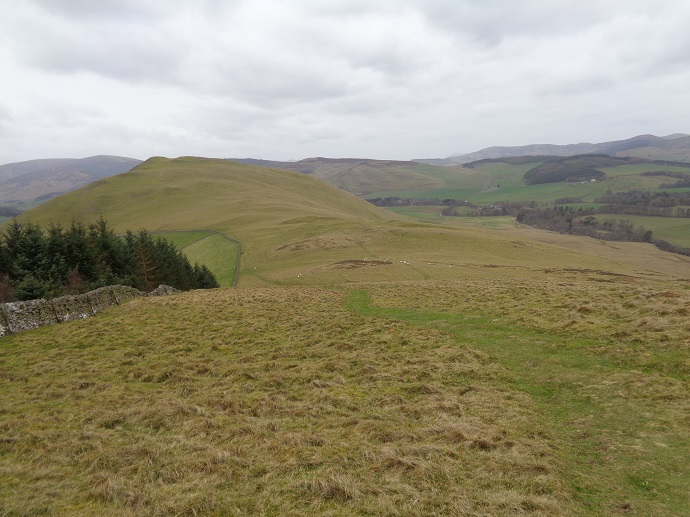 From here it looks like the route is going to take you straight up the hill, as no other path is in sight, but a bit further on a bigger path comes into view leading down by the wall to the left and I parted company from the JBW and kept on up the hill. On the John Buchan Way

Now that it's not completely shrouded in trees the main summit turns out to have quite a nice shape to it - they must have been a nice pair of twins once, a bit more separate than bumps at either end of a ridge. It's a gentle climb, and quite quick, and there are faint signs around the summit of the hillfort which was once on the top, odd lines of stones. Looking up to the hillfort

The summit is smooth grass and occasional rocks, with a slightly different view, having moved along the Hundleshope hills a bit and closer to the mouth of the Manor valley. I followed the same grassy paths back down to the dip, then followed the more trodden line of the JBW on towards the town - I'd forgotten to look at when the buses were, so there was no particular point to hurrying, but the path did seem longer than I expected - I hadn't realised how much further I'd come from the town. Looking back along the side of the hill there was a surprising expanse of emptiness, with an old sheepfold and little iron-roofed hut near the foot. As I came closer to Tantah the town came more into view - beyond that the route starts shooting off down odd lanes at right angles, so that I never really knew where I was and could only follow the signs. Peebles in the valley

I came out more or less at the main bridge, but wandered down to the toilets (which no longer seem to be taking people's money and not letting them in, or maybe I was just lucky) and then along to the little bridge and back up to the bus stop.

I had more than half an hour to wait for a bus, so got back to Edinburgh a bit later than I'd hoped, although not unreasonably late for dinner - if I'd remembered to look at the timetable at the start I might have managed to hurry round for the bus before, or maybe I'd just have got frustrated knowing I was running late!

I decided halfway round that I need to appreciate small hills more - mostly I look at how to link them up across country, and that does lead to some good walks, but this turned out to be a really nice little walk fitting into an afternoon.