I had a great day on this one before, with Big Billy Billygoats, but that was on a scorcher, in June. This one was to be a touch colder, but it looked like last day of good weather, so was keen to get out and get a good winter walk, along with pals, Marina and David, joining us. Pity Archie Brochan was detained elsewhere, as it was he who suggested trip to Ben Challum The big lay-by was near full by the time we got there. Obviously, everyone was wanting up first, to get a good view of us coming up behind

By the time we crossed the railway line, we were already into a decent amount of snow. Lot of people out today. A reminder why we usually go midweek! Still, good to see some in alternative dress ..... and it helped show the way 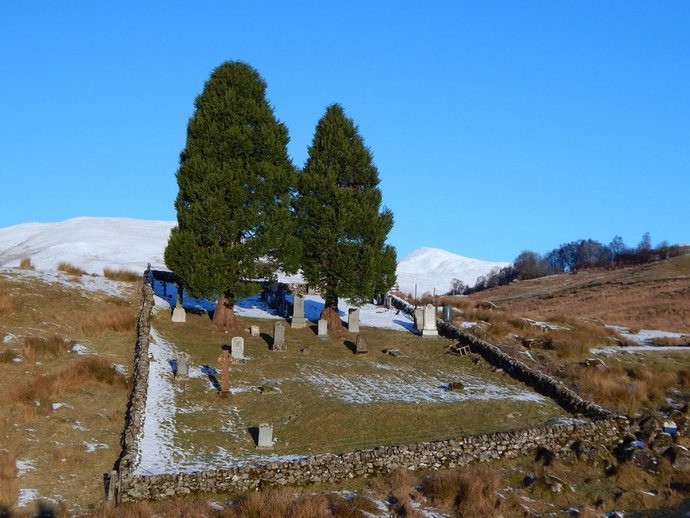 Pano to the west.

It was a really clear and crisp day, affording fine views of surrounding peaks, such as Ben Lui, Ben More and Cruach Ardrain. Just beautiful! About the 680m spot, we stopped for some grub and decided to put on the crampons, not that they were needed but, to get some practice, both at tieing and walking in them. By now it was time for the steep stuff. Poor Marina, was only just on the mend from flu, so it was a real struggle up to the south summit, but as is her style, she is not one to be easily beat and pushed on, to the summit from there! David and Marina, showing off the footwear :) Over to Ben Dubhchraig, Beinn Oss and Ben Lui. Folk winding their way up the last big climb. Tough going up this bit. First view of the summit. Still a good way off!

We posed around for a few more pics and refreshment before hitting the trail down. I was pleasantly surprised how much difference the crampons made going downhill, which was especially noticeable once we took them off, as steps became less secure. David and Marina, at the top.

Photo time. Not always as clear as today! Look back over to the South Top. Over to Beinn nan Imirean. Ben Vorlich and Stuc a'Chroin, Lochearnhead, away in the distance.

Light was beginning to diminish as we made it back to the car, but there was still plenty of others out on the hill. What a day and topped off by a nice beer in Tyndrum. Little did I know that within a week, or two, I would also be flattened by the flu for the best part of a fortnight! Will take ages to get fitness back Through the cleft, to the summit. At first thought that was Marina, heading wrong way! Apologies to the passer-by.