Superlative mountain that it is, Bidean nam Bian had been at the top of Karl's to-do list for some years now. Indeed, we'd made an attempt on the route described in the present report back in January of the previous year, but had been thwarted by violent winds and blizzards (report here). This time around the absence of winter conditions was disappointing, but on the other hand, the spring-like weather was very pleasant and the forecast was good, so it seemed churlish to put it off any longer. Having indulged me the previous Sunday on Sgurr Mor - a Munro that Karl probably wouldn't have chosen to do himself - it was now my turn to indulge Karl on a Munro I'd been up twice before. My last ascent was so long ago, however, that I was really looking forward to going up again. Some mountains call you back again and again.

As we drove to Glen Coe from the bunkhouse at Kinlochleven, we noticed the clag was down on Beinn a' Bheithir and Bidean itself. A bit disappointing, but we were optimistic that it would lift off. In any case, conditions were a whole lot better than they were on our attempt the previous year. It wasn't windy, and it wasn't raining - blessings to be counted!

So it was off again along the wide track up the glen, admiring the formidable dome of Gearr Aonach. Then down to the river by means of the metal staircase and across the footbridge, up the rocky path, through a wooden gate, looking out for the right-hand path heading up above the gorge. Turn right again at a cairn, along a grassy path, wending its way up soggier ground to the stony steepening marking the start of the zig-zags.

The path led a long, long way to the left (as you face into the hillside), until coming to the foot of a heathery terrace going up right to a cave. We recognized this as the route to take. There were some wet patches around, but the rock was a lot drier than it had been last time. Zagging back right, up to the cave

From the cave an easy path went a long way to the right, until turning back up left to the foot of a rocky section - the 'crux'. It's an easier scramble than it looks, with lots of big holds to choose from. A long way left again above the 'crux', a bit more rock then a final right turn. Some distance along this path we spotted the correct way up to the top, which we'd missed last time. This made for easy going up a nice, definite path, which soon brought us to the top of the ridge. On the ridge of Gearr Aonach Across to the Aonach Eagach

We had hoped that, by now, the clag might have lifted. But, if anything, it was even lower. I'm not sure how Karl was feeling - he must have been disappointed - but I was beginning to resign myself to the probability of a viewless time of it on the tops, which saddened me for Karl's sake. The west ridge of Stob Coire nan Lochan provided the next bit of excitement as it became rockier. We reached our high point from the last time, then continued on the path, which traversed under the rocks to a nick on the left. Above here the route regained the crest, which broke into a few small pinnacles. This was an enjoyable scramble, giving out to easier ground, then the summit of SCNL. Scrambly bit on the west ridge of SCNL

The clag showed no sign of clearing, unfortunately, so we just continued down the rocky path to the col. I think by now we were just enjoying the exercise, without any expectation of an improvement in visibility - though we did get a brief glimpse of the corrie down on the left as we reached the col, which was nice.

The ensuing rocky ridge up to Bidean, with a few patches of slushy snow, was a joy to follow, despite not being able to see very far. As the gradient eased off towards the top the rocks gave way to snow, which was surprisingly extensive. Higher up we were back on blocky rocks again, which led up to the summit. Although there was no view, the mist seemed a bit brighter than it had been lower down, and this put us in an optimistic mood. We found a couple of perches on the boulders a bit below the summit, sheltered from the breeze (gentle as that was), got out the flasks and lunch packs and settled down for a siesta. What was remarkable was how pleasant the conditions were up here, considering it was still February. I usually feel the need to put an extra layer on when I sit down near a summit for any length of time, but on this occasion I felt no need to add to the two layers I already had on. The rocks and ourselves were beginning to cast shadows - the sun was very close to breaking through. Then suddenly the mist cleared to the south, revealing the curving ridge of Beinn Maol Chaluim, briefly, only to close in again.

We stayed put, hoping that eventually it would clear. Looking up to the summit, the banks of snow along the ridge beyond shone brightly though the thinning veils of mist. "I could sit here all day", Karl said, and I felt exactly the same way. "These are just the sort of conditions for Brocken spectres", I said. Just a few minutes later one appeared, for me, and for Karl, but only vaguely. I took a photo but the spectre didn't show up very well. Then at last the vapours parted, dispersed and lifted away, first on the southern side and then to the north as well. At this point we heard the voices of people coming up the path. It was time to move on. We went back up to the summit to take in the views that now appeared in all directions, and to take some photos. The others joined us at the cairn and told us they'd seen a...they couldn't remember the term, so Karl helped out - "Brocken spectre?" "That's the one", they said. We continued on our way towards the second Munro of the day, Stob Coire Screamhach. I was so pleased for Karl that this was turning out to be a very memorable day. Beinn Fhada and the Buachailles When we reached the Bealach Dearg we peered down the descent route into the Lost Valley, which was banked out with snow and looked very steep - unquestionably an ice axe and crampons job. Karl wasn't too keen on the look of it, but was slightly reassured by a couple of guys coming up it. We carried on up to SCS in the warm sunshine and enjoyed the wonderful views from the top. Back at the bealach we put on our crampons and got our ice axes out, along with a shortened trekking pole each. The worst bit was stepping over what remained of the cornice down to the snow ledge underneath. But the bucket steps helped and, facing into the slope, the axes provided security when pushed down full-length into the sugary snow. It was laborious work but we steadily made our way down. At last we reached the scree at the bottom and it was straightforward walking from there into the Lost Valley, following a good path. View down the Lost Valley

Karl had been wanting to walk through the Lost Valley for years. He liked the name, suggesting a land that time forgot, roamed by dinosaurs or woolly mammoths. Looking back up to SCS

Disappointingly, there were no dinosaurs or woolly mammoths. Or anything else much, apart from stones and grass and some impressive boulders. Shaded Gearr Aonach with sunny Am Bodach behind

But the real joy of the Lost Valley is the wooded gorge through which the Allt Coire Gabhail roars. This walk just kept on giving. What a day it had been. 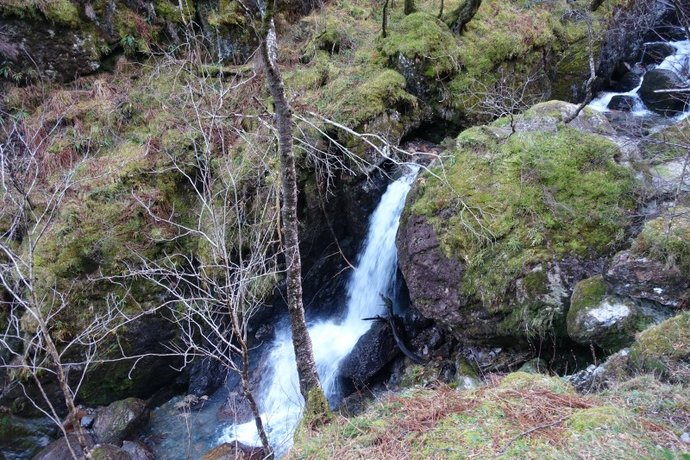 Waterfall at the outflow of Lost Valley

As we climbed back up the metal steps towards the open glen, thoughts turned to possibilities for the next day - our last of the trip. It was a balmy evening with the feel of Spring in it. Winter climbing was a write-off, but if tomorrow stayed as warm and dry as this...?

you wouldn't want to be doing it this weekend

I have seen Glen Coe snowless in February but it's unusual and normally the entry into the head of The Lost Valley involves quite a steep and technical ice axe descent through the cornice. After say 5-10m you can turn round and carry on facing outwards . It can be like that right into June

. Glad you got the views in the end, still one of my favourite mountains

Another good day - good to see you were successful this time even though not getting the typical winter day preferred. As pmsbd says, definitely good that you didn't hold off a couple of weeks ! - cheers

Another good day - good to see you were successful this time even though not getting the typical winter day preferred. As pmsbd says, definitely good that you didn't hold off a couple of weeks ! - cheers

past my sell by date wrote:Wow - sort of "Just in time"

you wouldn't want to be doing it this weekend

I have seen Glen Coe snowless in February but it's unusual and normally the entry into the head of The Lost Valley involves quite a steep and technical ice axe descent through the cornice. After say 5-10m you can turn round and carry on facing outwards . It can be like that right into June

Yeah it's back to winter now isn't it? I can imagine that descent into Lost Valley could be pretty hairy when there's a proper cornice to negotiate. The only problem when we did it was the sugary softness of the snow, particularly where it thinned out a bit over rocky ground about 20m down - very slithery with not much purchase for an axe. Cheers

. Glad you got the views in the end, still one of my favourite mountains

Thanks naepace. The views made the day really. Definitely one of the finest mountains in Britain

rockhopper wrote:Another good day - good to see you were successful this time even though not getting the typical winter day preferred. As pmsbd says, definitely good that you didn't hold off a couple of weeks ! - cheers

Thanks RH. I'm glad we took the opportunity - Karl was well pleased, though he wasn't so keen on the descent!