The previous day had been a not very pretty, wet day doing Bruach na Frithe with Steve. Was well impressed to hear some of the group managed Am Basteir, while another group had gone for a jaunt round the Quirang. Unfortunately, the minibus broke down on them, but maybe more of that later.

As we gathered in the evening there were some good tales of things done and not done, as we enjoyed a nice meal and few pints in the Sligachan. Not too many mind you

Still had high hopes of getting one decent day out this May weekend!
Alas, just like the day before, the weather tipped the wrong way! When we got up it was dreich and breezy and from there went downhill a few notches as we had access to the other minibus and itched to get on our way, being joined by two others, while another couple headed for a stoll in Glen Brittle.

From the hostel, it was quite a pleasant hike, with many nice waterfalls catching the attention, however it was impossible not to notice that Sgurr Na Banachdich was shrouded in cloud, as wind and rain began to increase. Passed a group of a few walkers, the lead of whom caught the eye. I'm not sure if it was the shorts and light attire, or apparent casual approach to navigation, but Steve did not seem impressed

We made our way into the corrie and up the scree, but by now visibility was becoming severely restricted. At first there was bits of track to follow, but then I was in the hands of Steve, aided by some technological assistance.
Louise was just about done in after her exertions on Am Basteir the previous day, but bravely persevered as conditions got worse as we made it to the summit, however it seemed a walk in the park for Tiago and Steve. The scree-filled corrie Coir' nan Eich, or what one can see of it.

Only time for the briefest of congratulations, damp photos, then about turn at the summit. Coming down was no lark either, as we struggled to keep on track, working our way round to An Diallaid. Eventually, the route became more discernable as we dropped down into the corrie. Expertly placed rain drop. Made it! Again, we passed the group we had met on the way up. They had struggled to find the way and eventually called it a day. Still don't think Steve was impressed A party heading in to Coir' nan Eich, as we headed up. My buddies for the trip. Last look back before being swallowed up by the gloom. On our way back out the corrie. Fog beginning to lift.

As often the case, things began to improve a little, so we stopped for some grub down in the corrie, before striding back out the way we came in. There was a film crew busy at work at the bottom, but don't think it was us they came to see.Nevertheless, I felt chuffed to get in another Skye Munro, but so disappointed with the weather we got each day 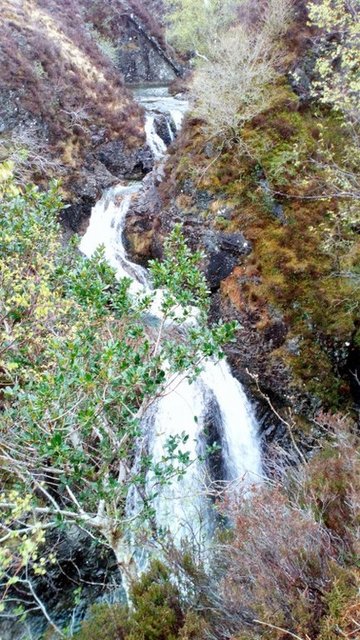 Falls on the Allt a' Choire Ghreadaidh, on the way out. Up to Sgurr na Banachdich as we headed back to Sligachan. Typical, or what!? Up to Coire a' Ghreadaidh. 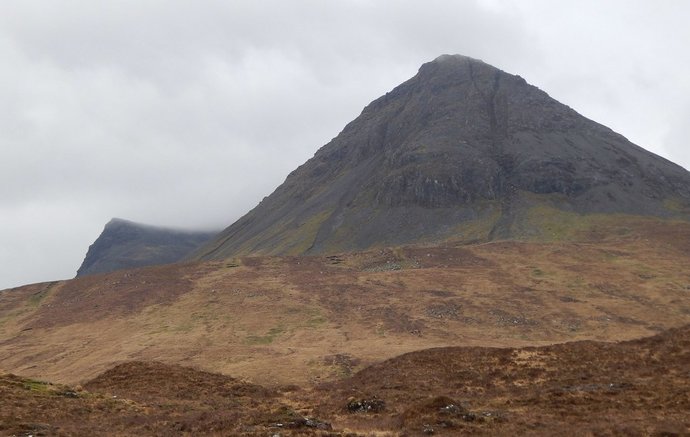 The film crew at work. Unfortunately, they weren't looking for any be-draggled extra's.

So, that was the end of the fun, or was it? Well, not quite. As before, we all gathered back at the bunkhouse and chewed the cud over our days efforts. No meal at the Slig tonight, so a massive carry out, was carried in. Also, having bought some vino and beero in Fort William, on the way up, I was keen not to cart it back home with me. Others seemed in form for some fun too, but not having any hiking to do the next day, I think I had more than everyone else Glamaig, a nice looking hill, if not a Munro. Up to Sgurr nan Gillean and Am Basteir, on the Monday.

Pano from Glamaig round to Sgurr nan Gillean and Am Basteir. The old bridge at Sligachan. Marsco, to the left and you know those to the right.

Monday was a bit drier so managed a few, slightly better, atmospheric shots of the hills around Sligachan. As said, we were one minibus short, so frantic arrangements were made to get us back to the big smoke, so I ended up with a few others on a recovery truck, all the way back to the Bongo, lying awaiting me in Tyndrum. All part of the fun. Thanks for a great weekend all, apart from the blasted weather! Back down in Glen Brittle. Posing back at Sligachan, on the Monday. The bunkhouse, somewhere in the trees. 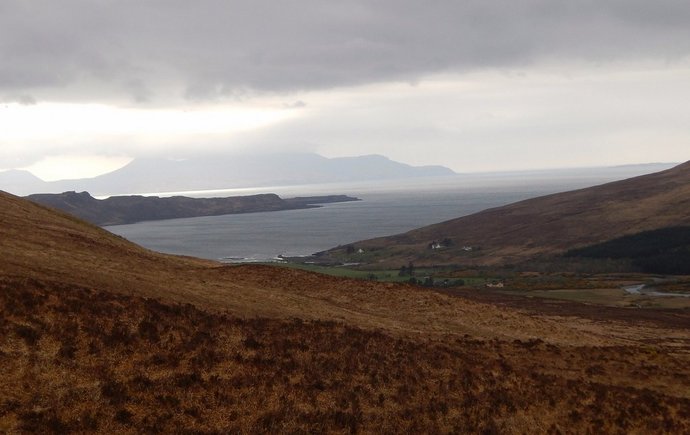 Out to Canna and Rum. Sgurr nan Gobhar and think that's An Diallaid, sticking out?

Pity you didn't have any views from the summit.
But your indeed atmospheric photos from the Glen are impressive none the less.

jacob wrote:Pity you didn't have any views from the summit.
But your indeed atmospheric photos from the Glen are impressive none the less.

Cheers, Jacob. Yes, atmospheric is a good word to use anytime the weather is mince