Cul Mor: silence before the storm

Cul Mor: silence before the storm


Tuesday the 5th of March was forecast to be a sunny affair in the far north of Scotland. After the windy Sub'2 experience on Sunday, it was great to go to a higher mountain for a change.Our car has just passed the MOT with flying colours so the idea of a quick trip to the weird word of Assynt was hatched. We had already climbed all Corbetts and Grahams in Assynt so with no pressure on our shoulders, we could pick whatever we wanted and simply enjoy the walk. I was keen to repeat Cul Mor as it's been a while since we visited this Corbett.

We knew that storm Freya was coming on Wednesday and I was desperate to walk off some recent stress (it's called bureaucracy and it makes me sick). Because weather has turned colder and it rained in Beauly the day before, we were convinced that a hill as high as Cul Mor will harbour some fresh snow. To our surprise, there was very little. A thin layer covering the rocks on the north facing slopes, that's all. We didn't even bother taking crampons, just packed YackTracks, and we didn't even need these. The day was bright, the wind was low and if it wasn't for the cold air, one might think we were climbing this hill in May or June!

Track_CUL MOR 05-03-19.gpx Open full screen  NB: Walkhighlands is not responsible for the accuracy of gpx files in users posts
Cul Mor from the car park:

We started on the well-made stalkers patch which makes the first half of the climb really easy. We didn't push it too fast, just enjoyed a rare sunny day in the current unsettled spell of weather. As we walked up, we spotted a small herd of deer grazing nearby.
Friends from the hills and Cul Beg in the background:

Further north, the Assynt Munros held on to more snow:

Canisp looked as snowless as our target Corbett:

The path took us up all the way to the small top of Meall Diomhain (609m) where we stopped for a short photo session. I was a bit concerned that we didn't take enough water with us (didn't expect it to be as warm as it felt at the moment!) but the hill looked so tasty that no force could stop me from going all the way to the summit!

Distant An Teallach to the south:

Across the slight dip of Fliuch-choire, we climbed up the western shoulder of Cul Mor, right to the edge of the hidden corrie, Coire Gorm. It didn't matter that we've been here before, this is a superb mountain, one to visit many times and best saved for good weather.
Suilven in its full glory: For the final 200m to the summit, the route follows the edge of the corrie. It's steep-ish and bouldery higher up, but no scrambling required: 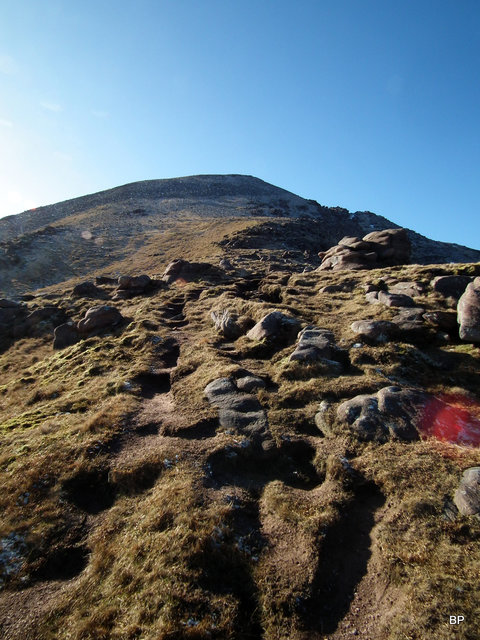 Not required, but it's nice to scramble up a few large rocks for mountain explorations, especially if you are a mad cat: View north from just below the summit: The boulderfield was a bit wobbly in places and covered in thin layer of snow as it was facing north, but I was too eager to get to the top to pay much attention to unstable rocks: It was now time for a summit picnic! We sat down and stretched out, enjoying the clear weather. Views around us were fantastic in all directions, especially to the north, but also south and west to other Assynt hills. There is no place in Assynt with bad views

NE to Loch Veyatie and Cam Loch, Assynt Munros to the left:

WH route suggests taking a short detour along Sron Gharbh, the western ridge of Cul Mor. We decided we would only do this if weather allowed us, but as conditions looked fine, we were happy to explore the hill a bit more:

The detour only takes an extra hour or even less, but I don't recommend doing it fast. Take your time, savour every step and sink in every view. This is the way to properly see Cul Mor for what it really is: a formidable fortress with many steep flanks, a mountain with loads of character, a peak of many faces. Also, some curiously shaped rocks:

The ridge to Sron Gharbh: 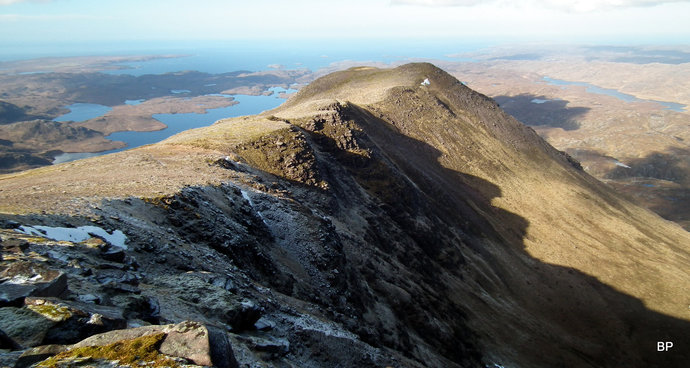 Stac Pollaidh, despite its modest height, dominates the view to the south-west: The cliffs of Coire Gorm below the summit of Cul Mor. This is the side of the mountain you will never see if you just do an up-and-down run to the summit!

We followed the edge of the cliffs towards Sron Gharbh, taking far too many stops for pictures!

Suilven seen face-on. Another mountain which is due for a repeat! On Sron Gharbh with Stac Pollaidh behind me:

The western end of the ridge drops down almost vertically, and the view west into the world of land and water is breathtaking. I don't even want to attempt to name all the lochs and lochans in this labyrinth of water, but it's one of the best views I have ever seen in Scotland. So no more words, just enjoy it as much as I did in "live" version! After another lengthy photo session, we walked back along the ridge, to visit the southern top of Cul Mor, Creag nan Calman. There is no need to climb it but it makes for a nice addition and offers some more exhilarating views!
The thing to climb: We kept taking detours to the edge of the cliffs, simply to find the best vantage points. There are very few places in Scotland that make my heart skip a beat - and this corner of Assynt, when seen from above, certainly did that! 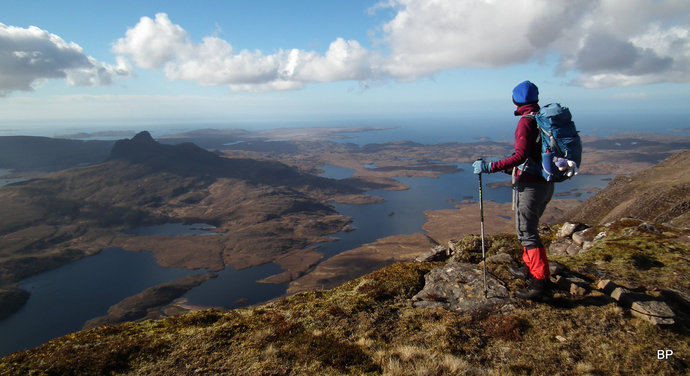 The weird world of land and water: To get back down, we descended the eastern spur of Creag nan Calman, where we spied a sketchy path. Later, we followed a more obvious path down this wee stream: Finally, we returned to Meallan Diomhain, where we picked the upper end of the stalker's path (it is marked with a small cairn). Now it was just a matter of retracing our steps back to the car. Not that we did that very quickly. Weather was still holding so there was no need to hurry. We wanted to enjoy the good weather while it lasted. We spotted a pair of ptarmigan and a mountain hare: the wildlife was out and about

Back in the car, we were in good spirits, definitely feeling better and more optimistic about life. It's true that mountains have that great "cleansing" ability. A day spent up there, surrounded with all the beauties of this amazing landscape, heals the wounds and fills ones heart and soul with optimism. Life simply CAN'T be bad as long as places like Assynt still exist

And special thanks to today's hero - the mighty Cul Mor!

On the way down home, we noticed that the forecast cloudy weather was pushing in from the south:

...and we knew that Storm Freya was on our doorstep. It has eventually arrived in the late evening and stayed for the whole Wednesday, so instead of getting soaked on the mountains, we got soaked with paint, doing some home DIY

But on Thursday, with slightly better conditions forecast for the western coast, we set off again to spend a day in the equally beautiful world of Moidart. TR in progress

Great choice! I've not been along to the western end but it looks well worth it. I was on Meallan a' Chuail the same day but didn't quite get as many fluffy white clouds to enhance my photos.

I really need to head up there one day, fantastic pics

Perfect de-stress, with or without snow

. That ridge out to the west is great - when I camped up there a couple of years ago, I took my dinner over there to eat and watch the sun set.

We love this hill. One of our favourites in our favourite place. Assynt is so beautiful. We did it 3/4 years ago at a similar time with similar blue skies but with more snow. Absolutely great day on the hill and were lucky to see a pair of snow buntings whilst we ate lunch at the col. Great WR. Thanks.

Great report and lovely photos BP. We had a beautiful day on Cul Mor in November, our first visit but I am sure it won't be our last. Definitely one to savour!

. A good bit of timing there to catch such a fine day before the storm blew in! I really must visit this unique area one of these days!

Fantastic and good timing with this report, as I'll be on Cul Mor next Friday- although I know there will be a log more snow.
Cheers- looks a great hill with great views