My 2nd hurried escape of the year was meant to be snow-holing with a couple of friends but the great melt knocked that plan on the head. So I hoped to walk Braeriach and Bynack More instead. Saturday's strong winds got me as far as the crossing of the Larig Ghru but I had to bail out from a Braeriach ascent - they were about 60-70mph.

Quick stop in Riever Country on my way up this time (Friday 22 Feb). 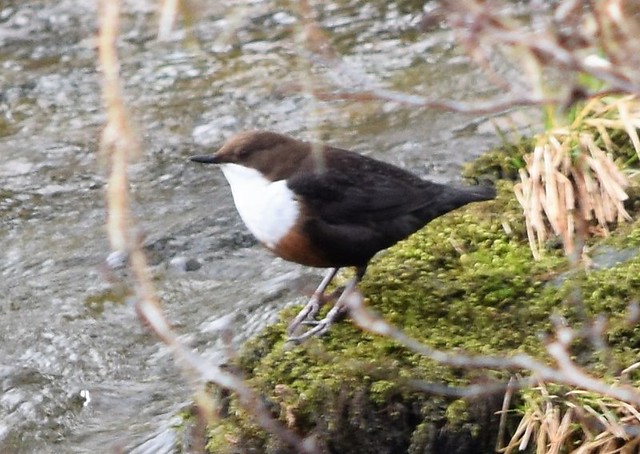 The only dipper I'e ever seen that didn't dip. 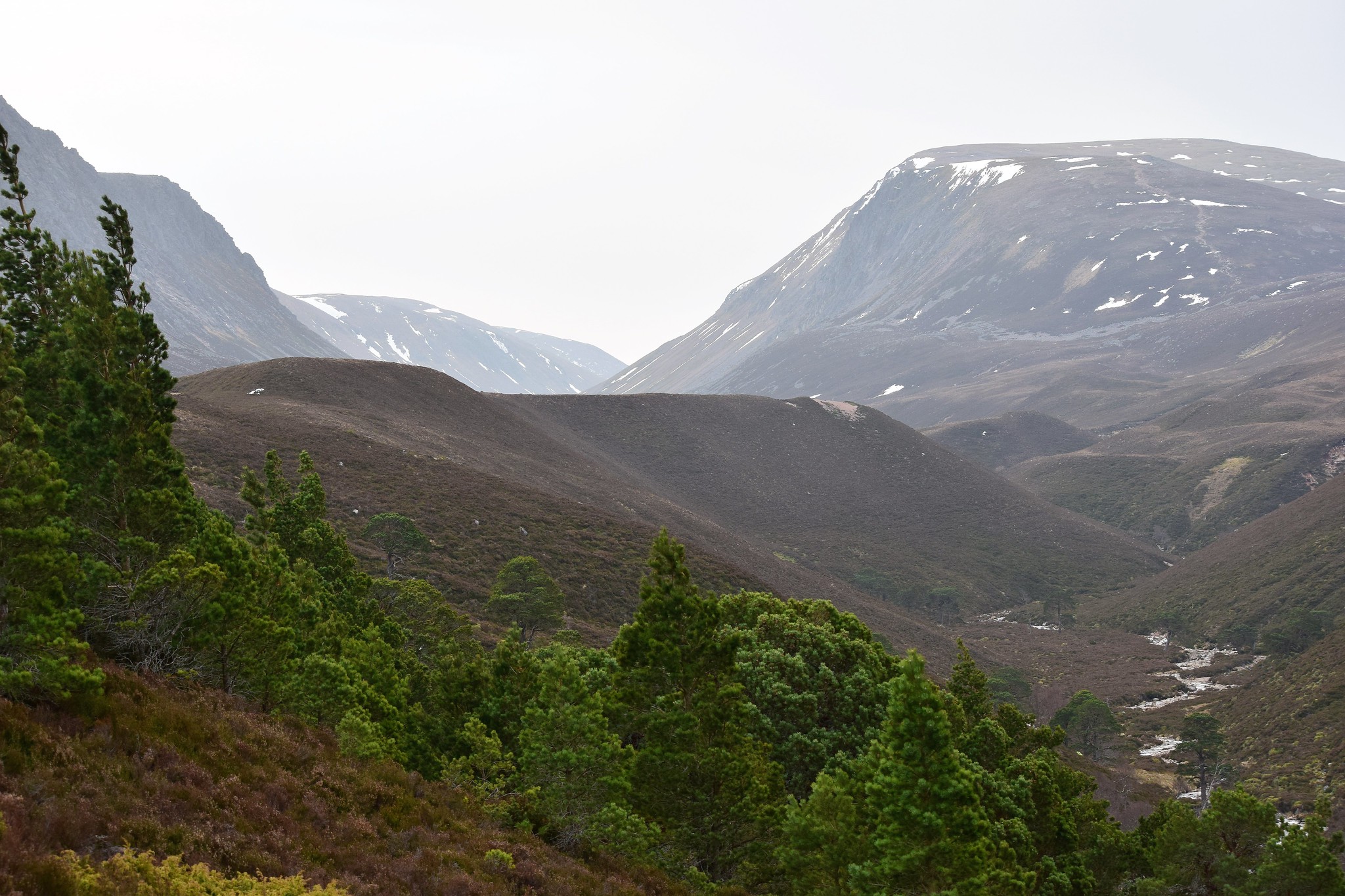 Towards the Lairig Ghru 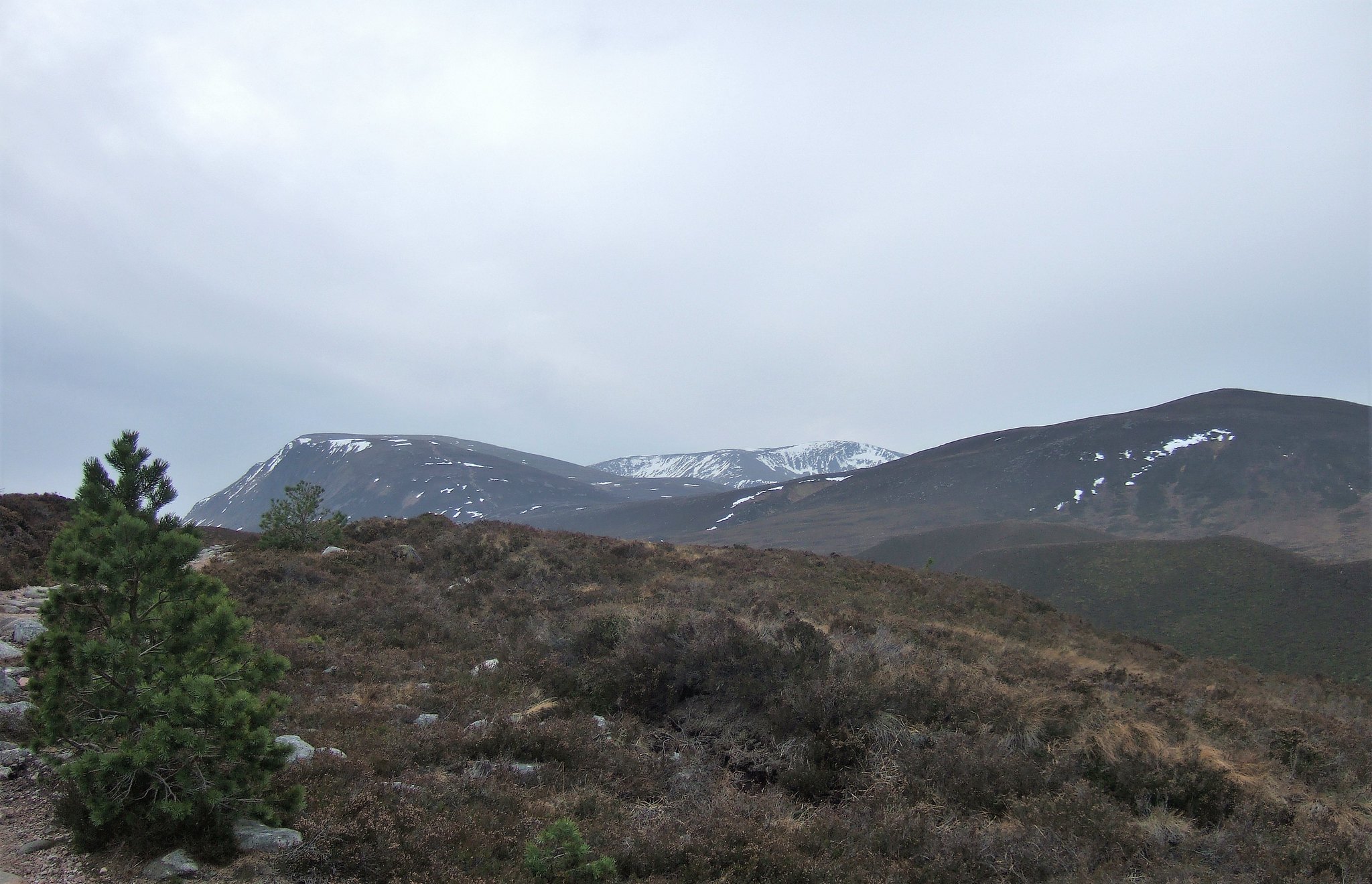 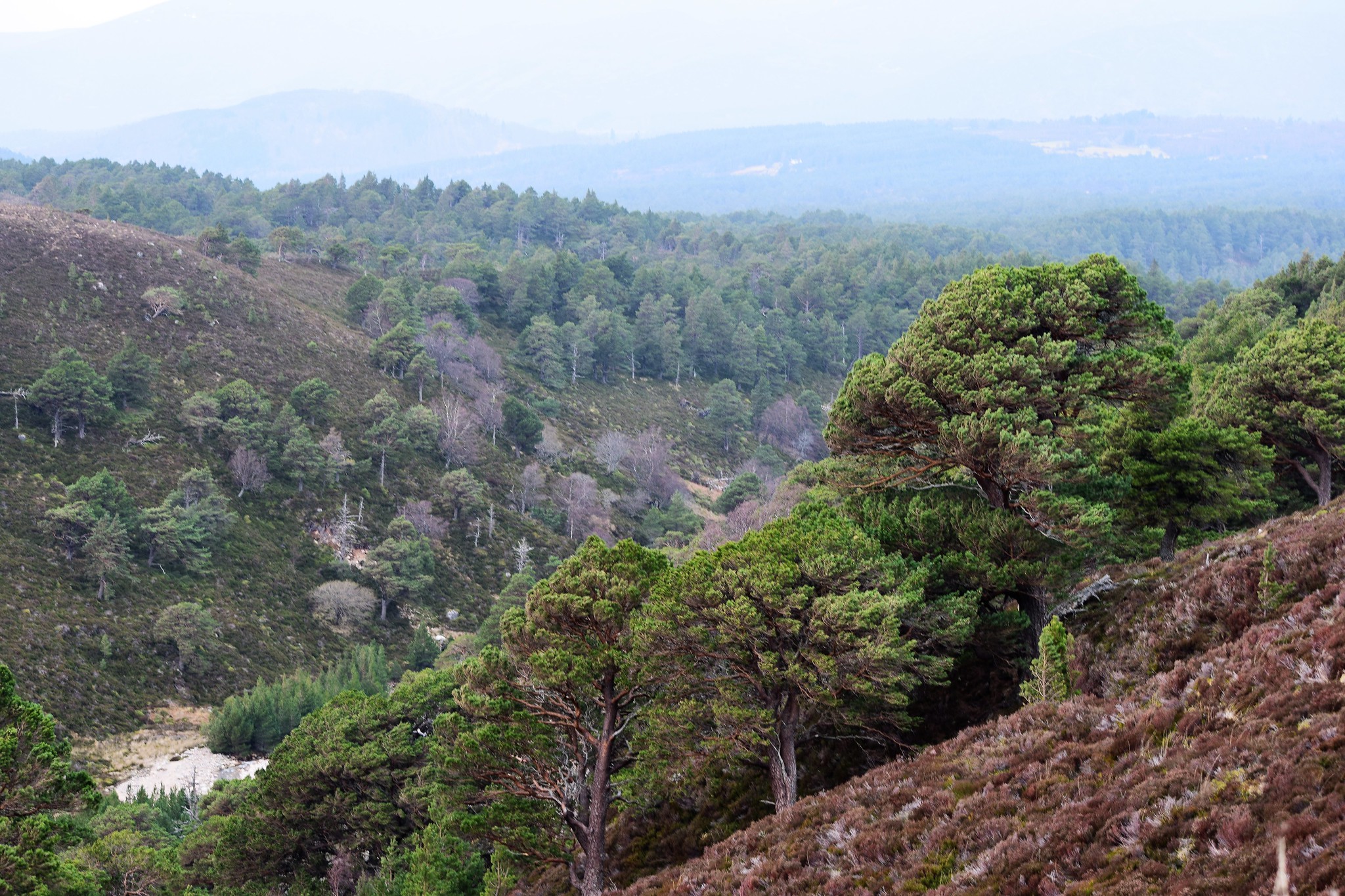 Post-bail, back through the trees. What a fantastic sound with the wind tearing through them (and me).


Sunday 24th on Bynack More
On my way to the carpark Loch Morlich was looking good enough to drink (in), so I did. 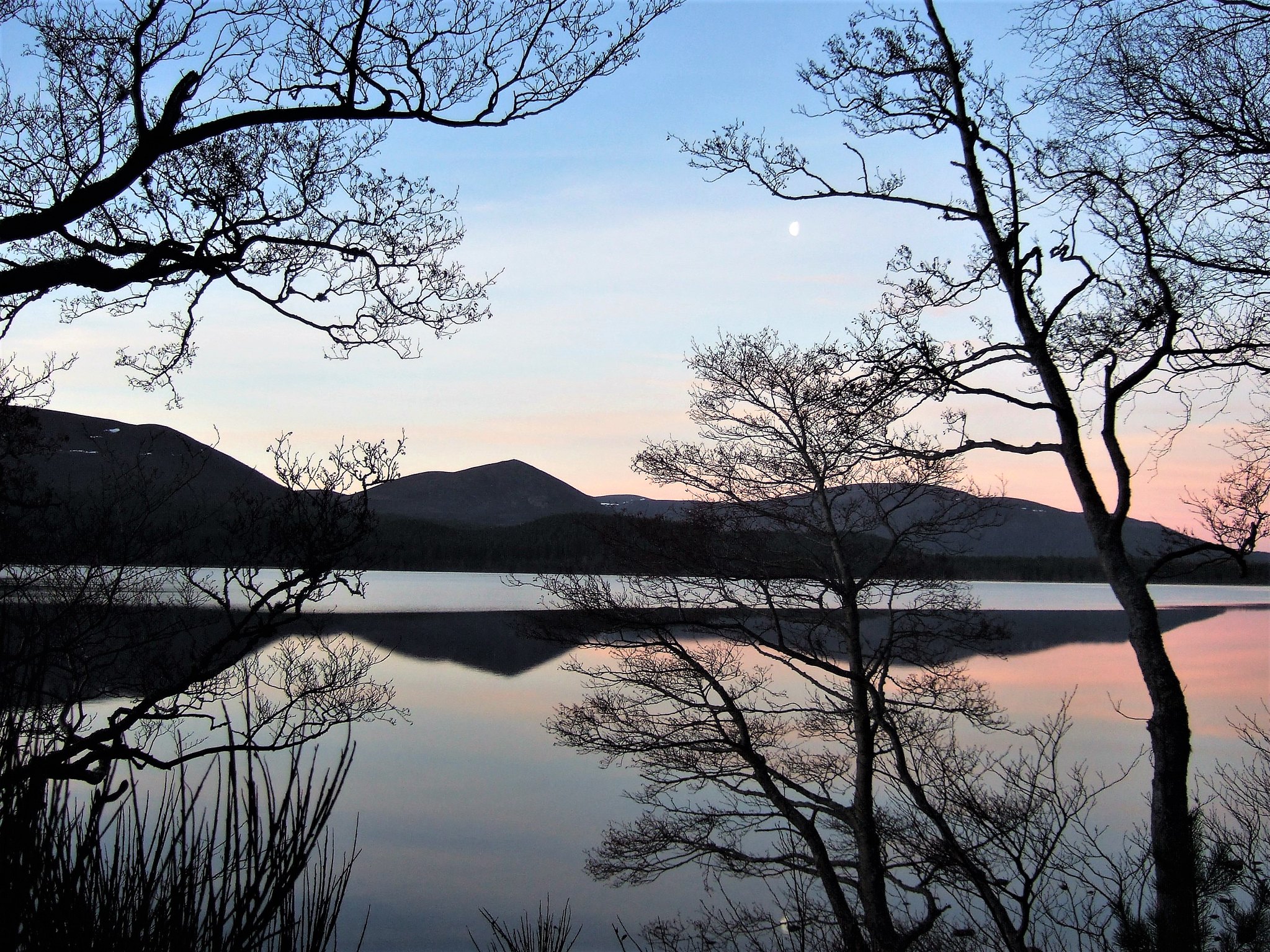 After winding my way through the forest, with an eye out for pine marten scat - since I'd seen a pine marten here a couple of years ago - I got to Lochan Uaine in all its green glory, remembered the leeches I'd also seen in 2017, and headed off over Strath Nethy.

It's such a flat walk to start with it made it an easy lovely morning to stroll along. Such a pity there was no snow though. Just tiny wee patches. Bynack More's ridgeback came into view. 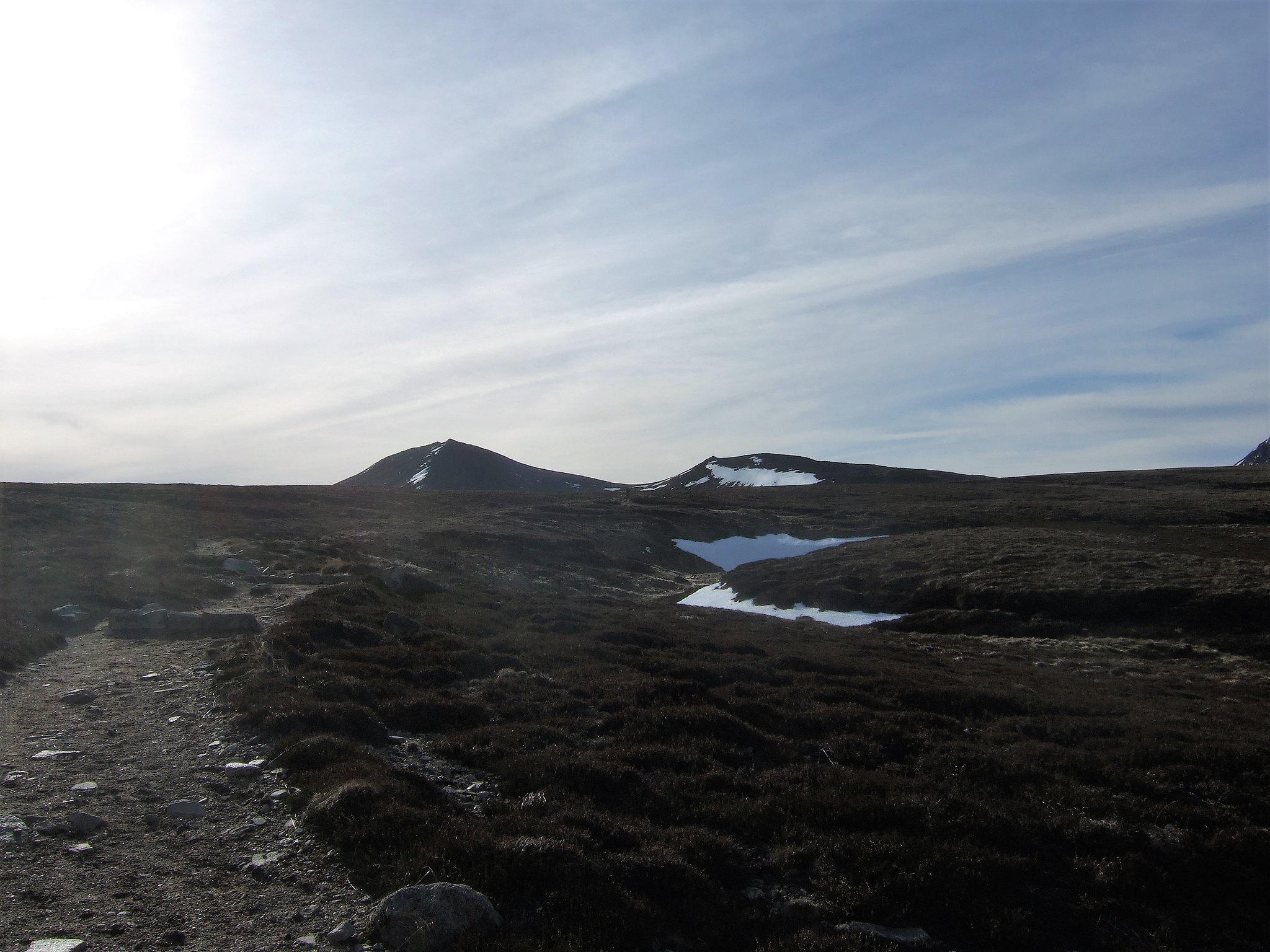 On my way up I could hear a ptarmigan croaking its distinctive call, and spotted it, in its bright white winter plumage sitting on the green, green grass. A female, she'd don her mottled coat soonish, but not yet. She crossed into a snow patch, and it was surprising to feel myself relax once she was more camouflaged. Not for long though - she popped up on to a rock and carried on calling. With each call, she tucked her head almost under her wing, almost looking as though she was retching. I don't think I've ever seen that before - wonder what that's about. 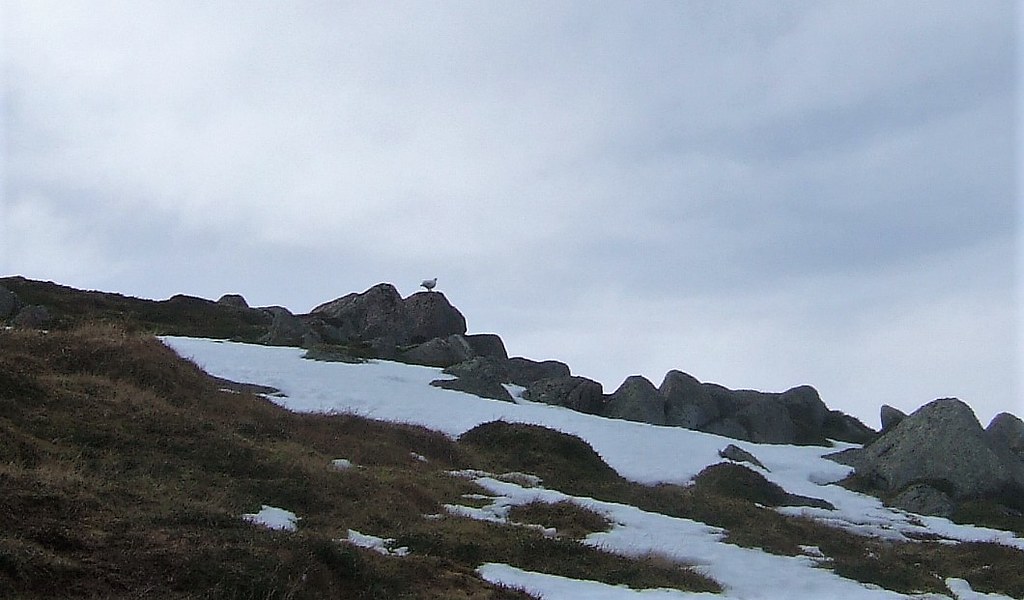 I also wondered if they and the hares feel how exposed they are or how camouflaged they are- or aren't -, whether they know when they're camouflaged or whether instincts just kick in to take cover when they need to.

Higher up on the hill's shoulder I saw a rock with rounded pebbles halfway down it, like knuckles. I didn't take a photo of it, which is a shame, but it was in line with more similar rocks, like the line of a dyke. 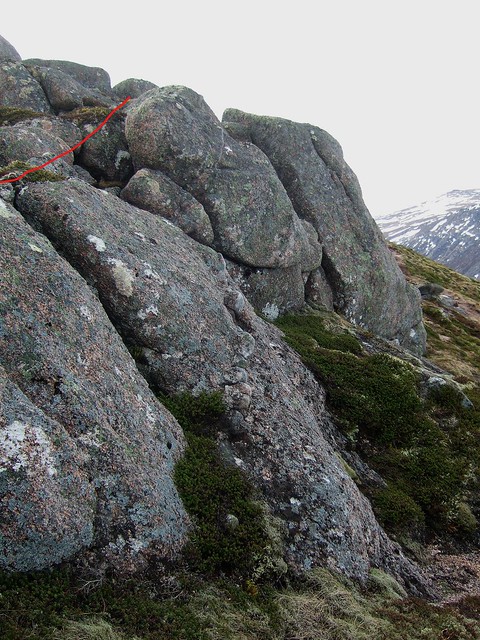 Pebbly line - no geologist, I (clearly).

Over to the east, across golden tussocks, the expanse of Ben Avon was looking inviting, with its tors - if also sadly denuded of the white stuff. 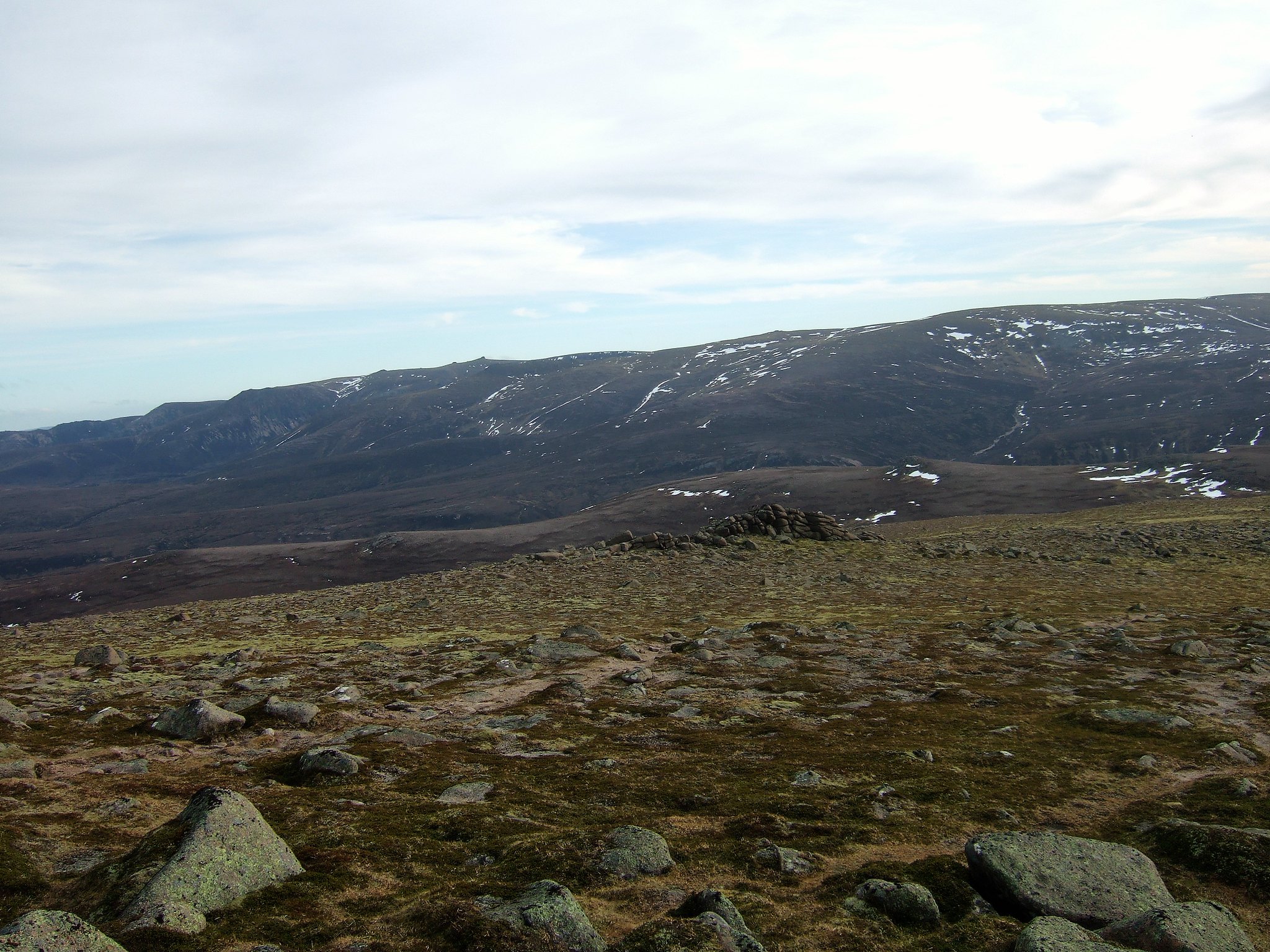 The wind was getting up, though not as badly as forecast (yet) and not a patch on the day before. In a bit of shelter below the top, I stopped for a coffee and a bun. There was a bit more snow and ice up here, enough to step carefully around, but not enough to need anything spikey. More ptarmigan too, and plenty of time to take up my bins and watch them.

Then it was just the last curly-wurly mini-scramble to the top, over the rocks, avoiding the ice, and wind or no wind, a sit to contemplate what had turned into a beautiful serene sky over the plateau and SW to the Monadhliath. 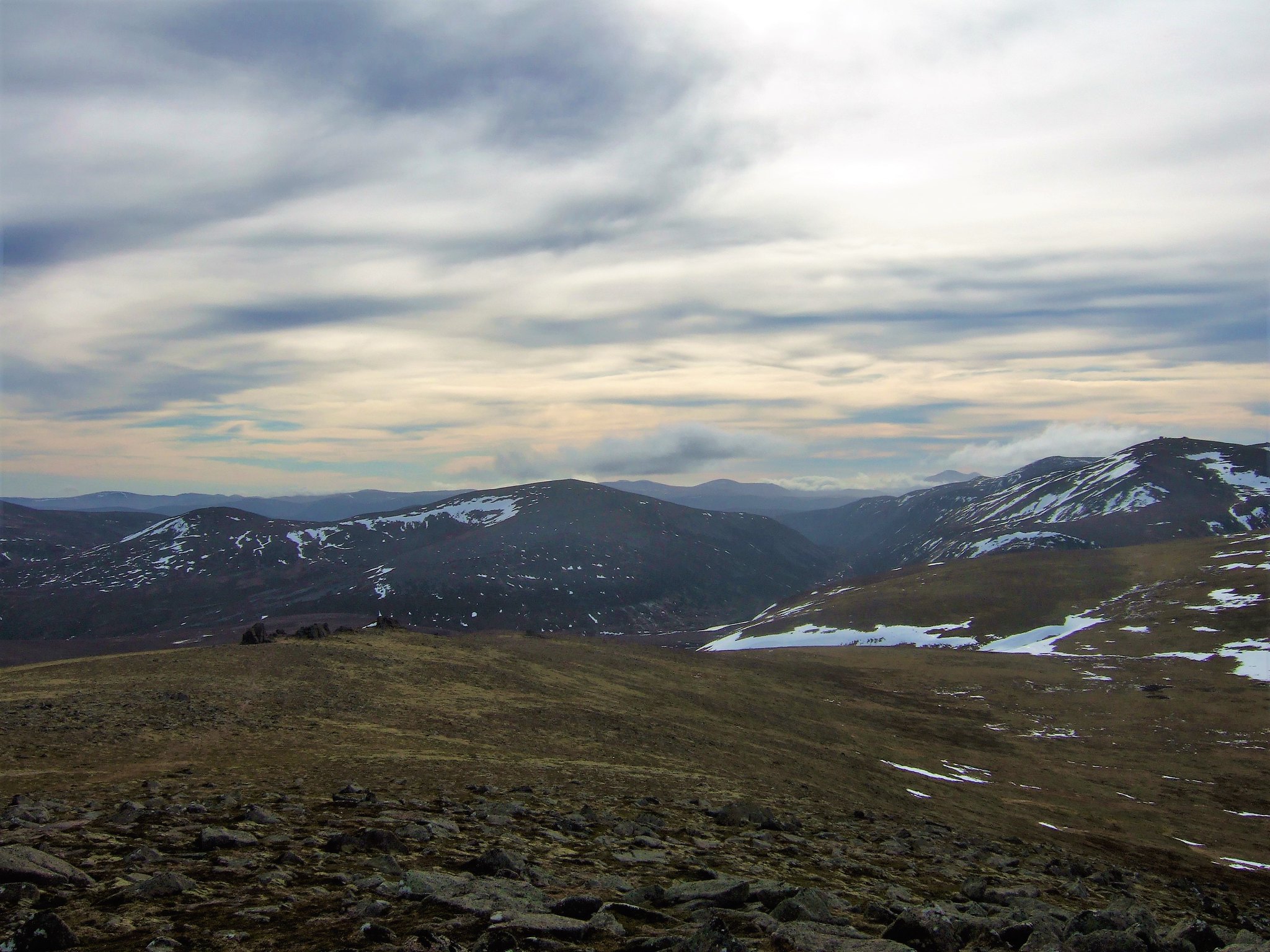 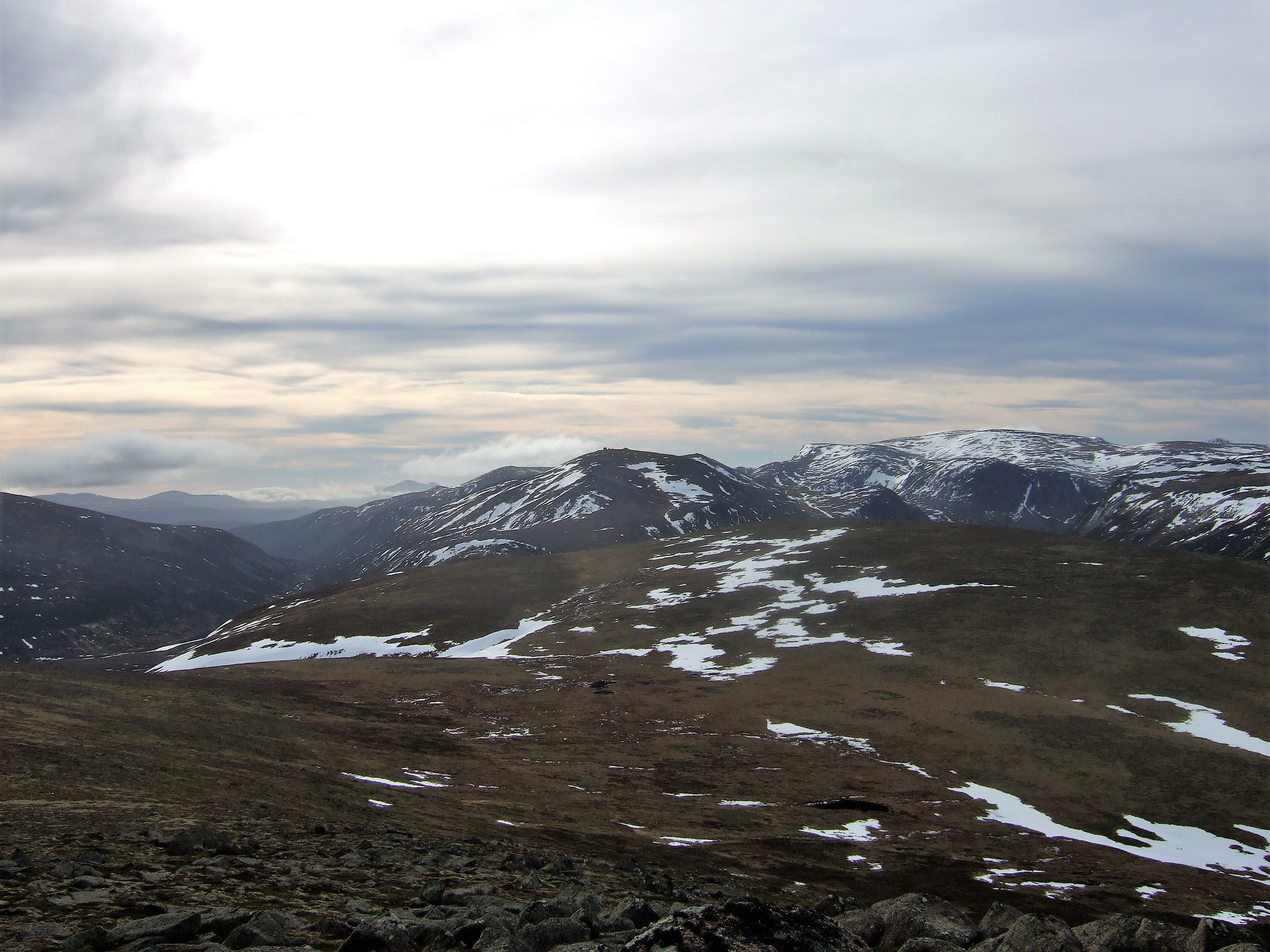 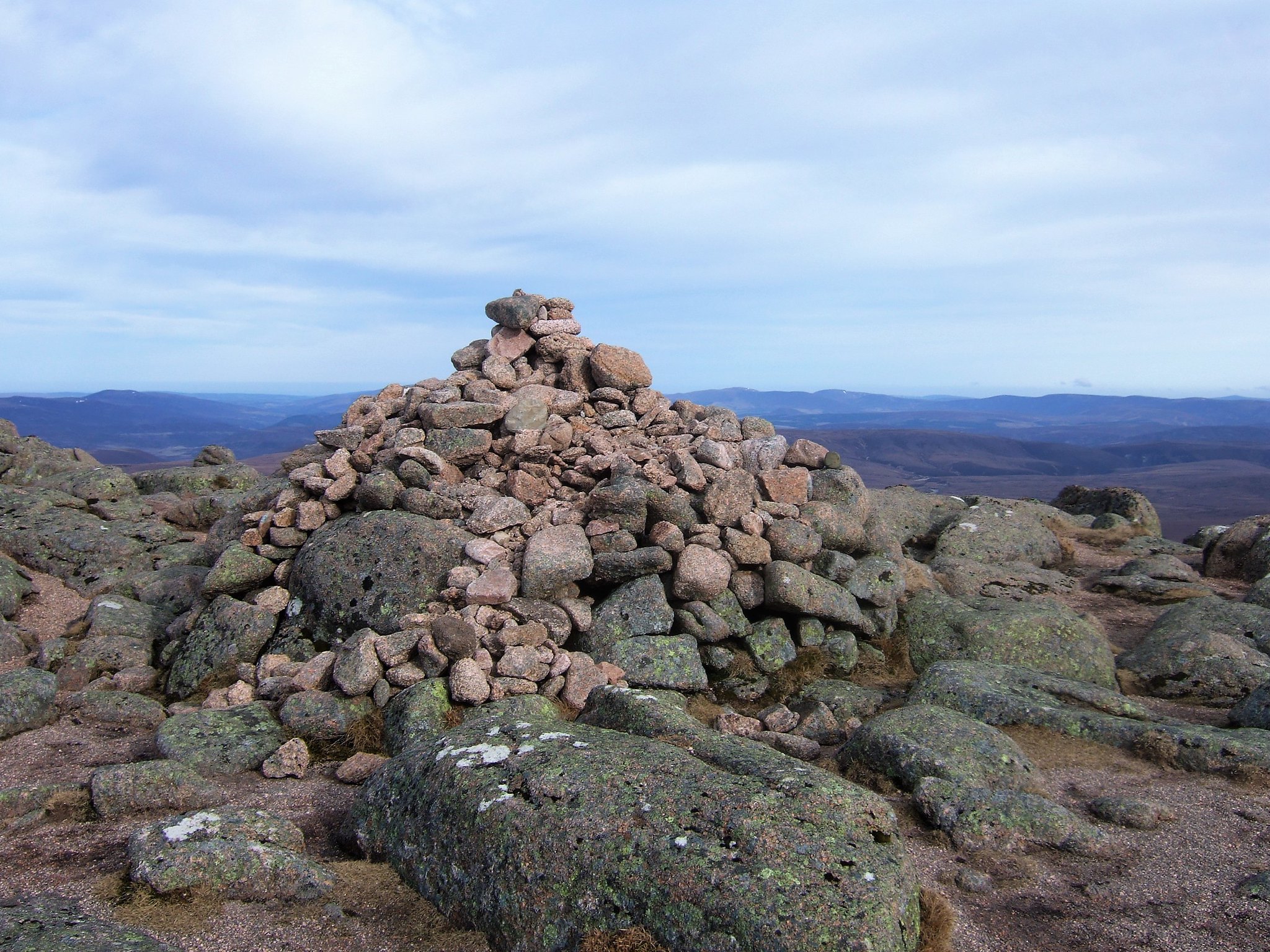 By this time the wind was up, and my original hope to walk down to the Barns and come back via the Saddle were asking for another blast along Strath Nethy, so it was turn around and take the path of least resistance, i.e. retrace my steps. The views had been further-reaching than forecast. It was predicted to be a really overcast day, but happily it wasn't. I thought I'd see Meall a Bhuachaille from Bynack More, but not further over to the north. So that was a treat. 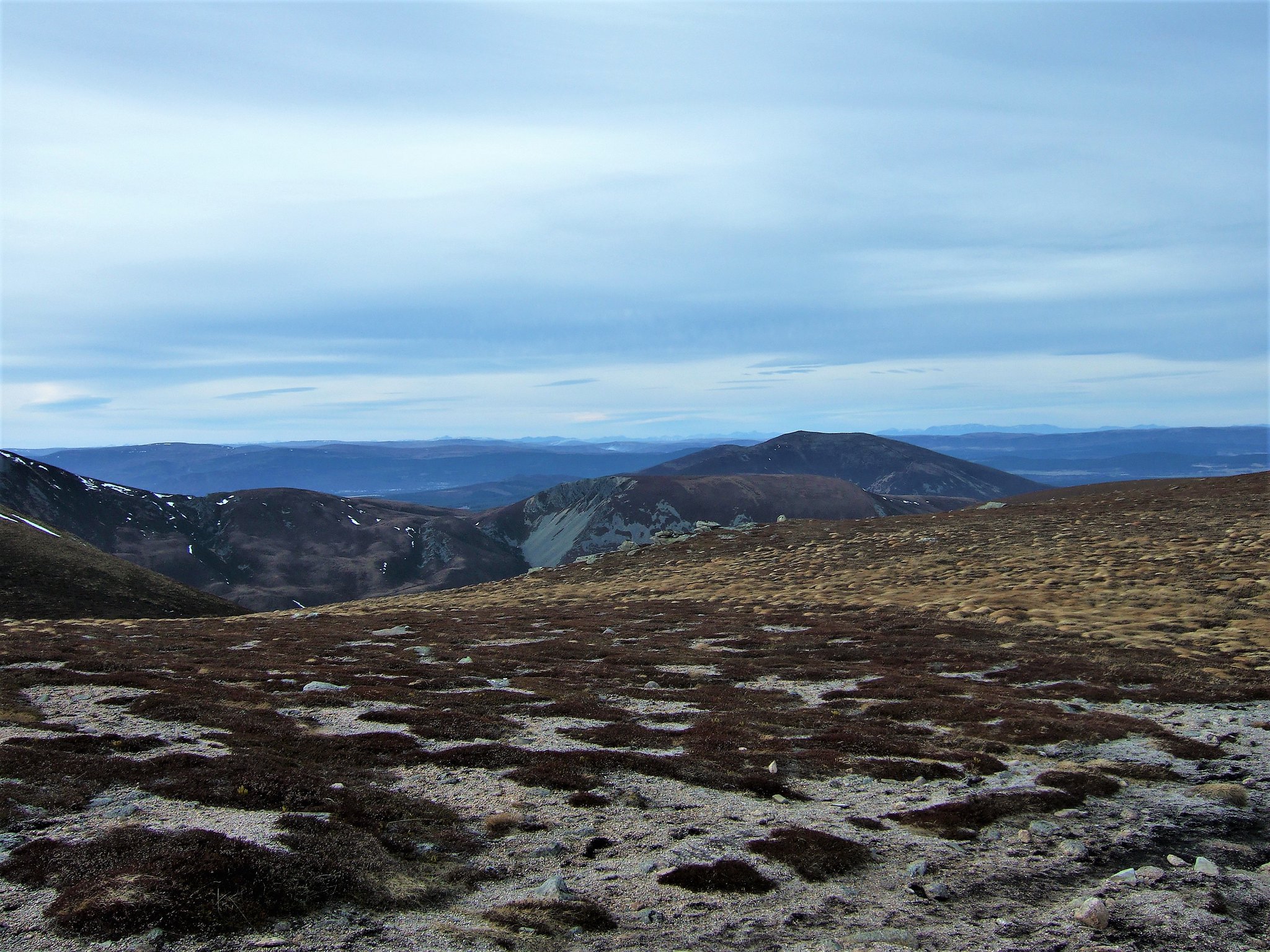 Golden tussocks to Meall a Bhuachaille

There's only really one rocky outcrop out of the wind, and that was beckoning a lunch stop. Lovely to look out over the expanse of basically nothing - no people, no politics - to the east and north, and just be up high, in no rush to get back down.

On the way down there was a pair of bullfinch and then back in the forest, a golden glow that stopped me in my tracks. 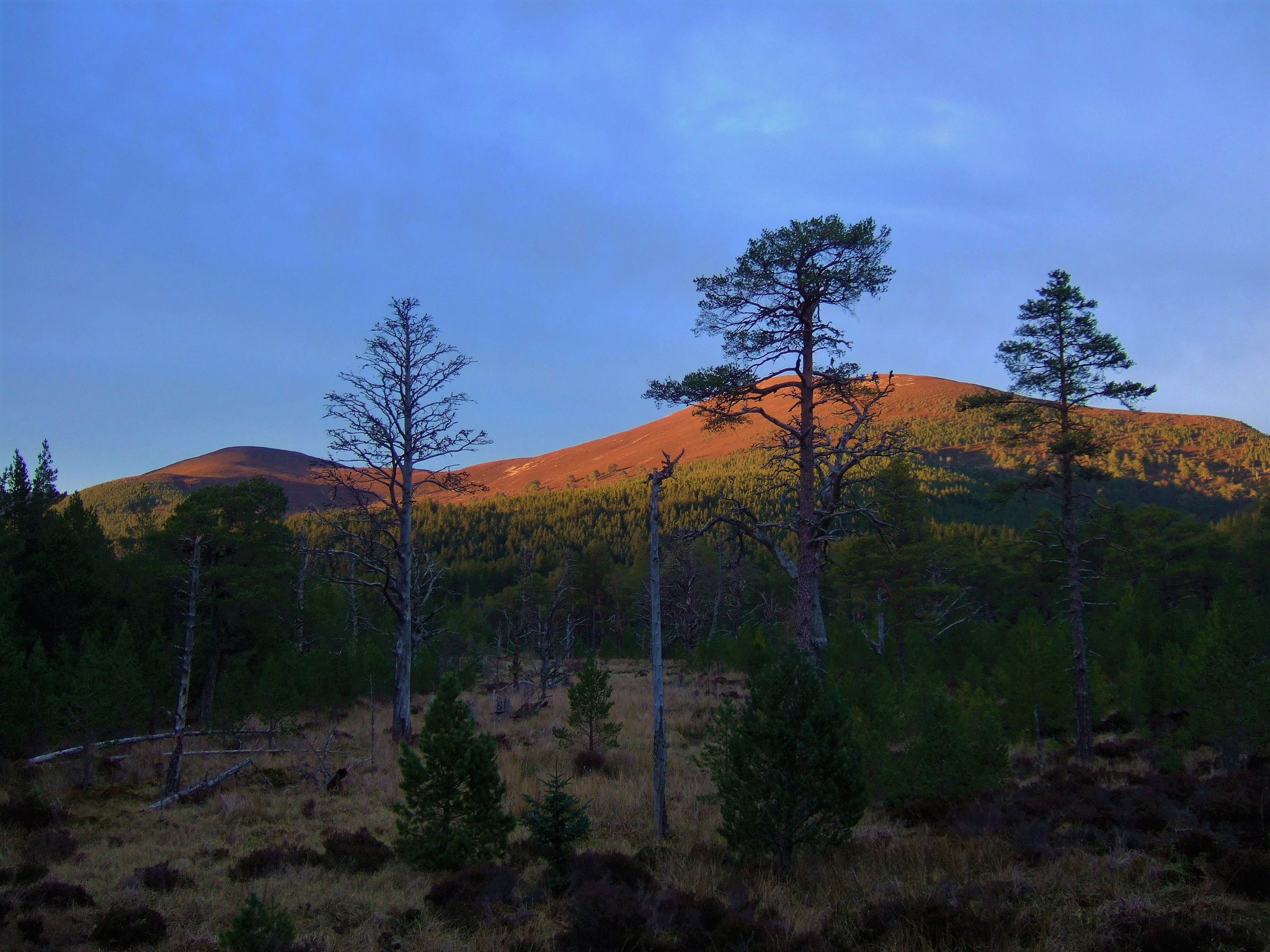 In the woods were mouse holes & detritus and a busy wood ant's nest - they've decided it's Spring -, lenticular clouds and then this sky back down at the road. 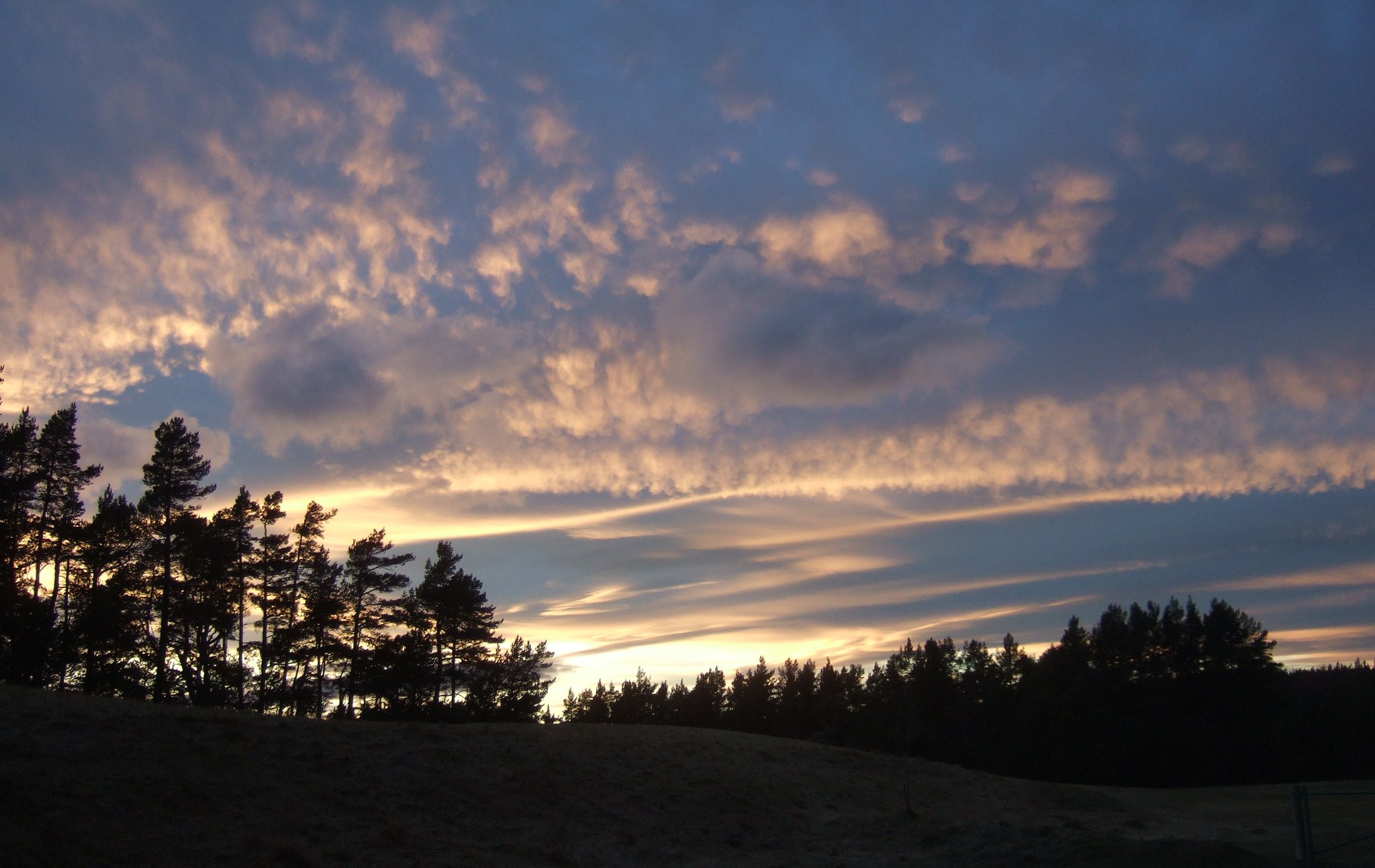 Evening clouds over the Hayfield.

Back to my digs for coffee, cake, packing and prep for the journey back down south via a work client meeting in Edinburgh.