Ben Klibreck on the Summer Solstice

Ben Klibreck on the Summer Solstice


On a windy Summer Solistice, Ben Klibreck was in my sights, having missed it out on my last Sutherland trip in April. The skies were clear and the day was mostly sunny so absolutely no navigation needed.

I pulled in just south of the Vagastie Bridge, where I found an NC500-stylee big white beastie stuffed with kippers (that's people kipping, not fish...), and crossed over the road to the obvious track. 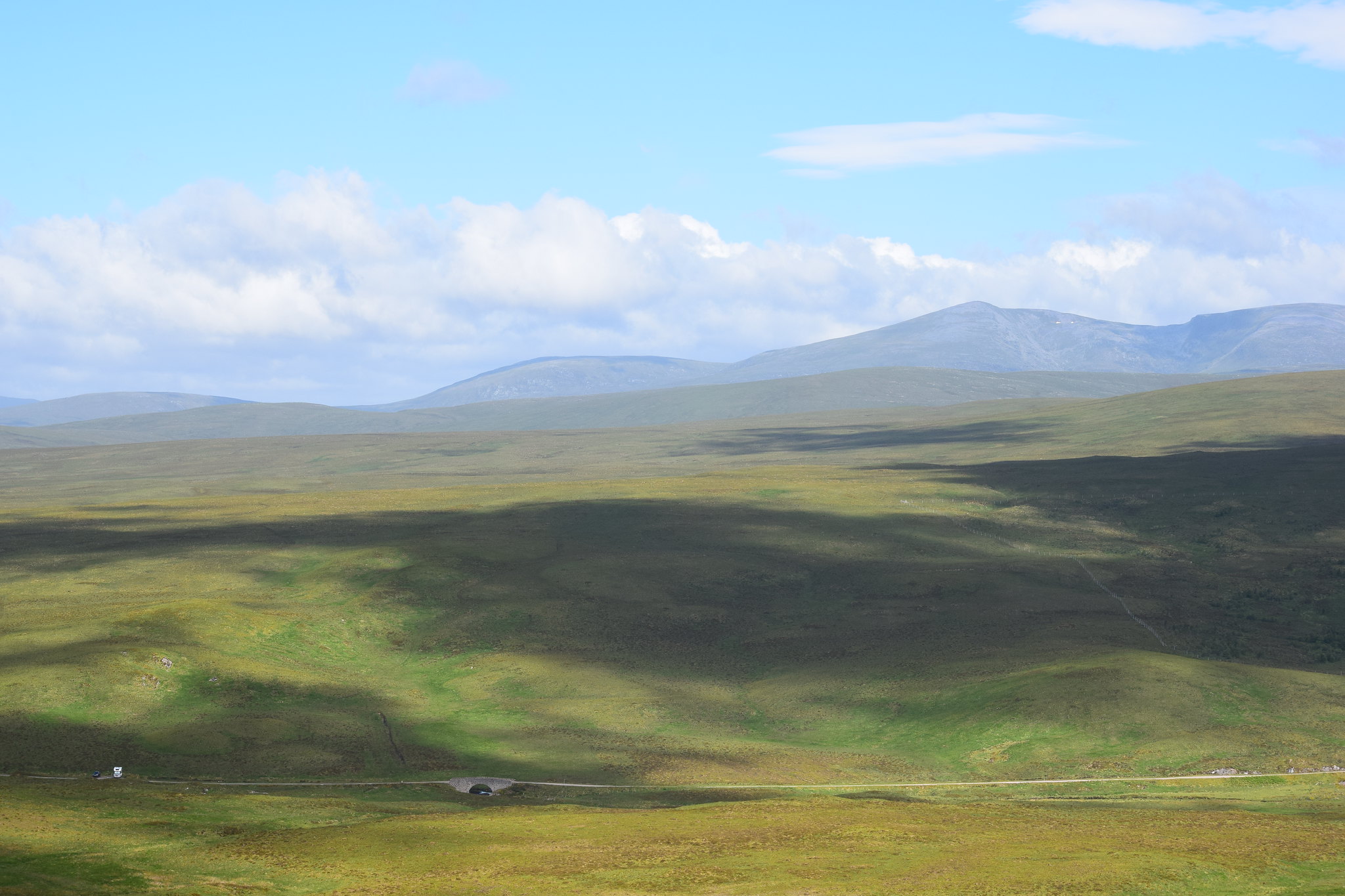 It's a fair old trudge along the west flank, and pretty punishing in the wind (no adrenalin to take your mind off it) but once up it's a real joy to hang out on this giant in the wilderness. Looking down on Strathnaver, Grummore and Grumbeg I found myself thinking of the thousands of years of subsistence farming, broch-building, weather-battling and, latterly, Clearance-miseries it would have witnessed since 'umans arrived.

In the absence of adrenalin, the generous views of beautiful Ben Loyal start early on from this western-approach angle. 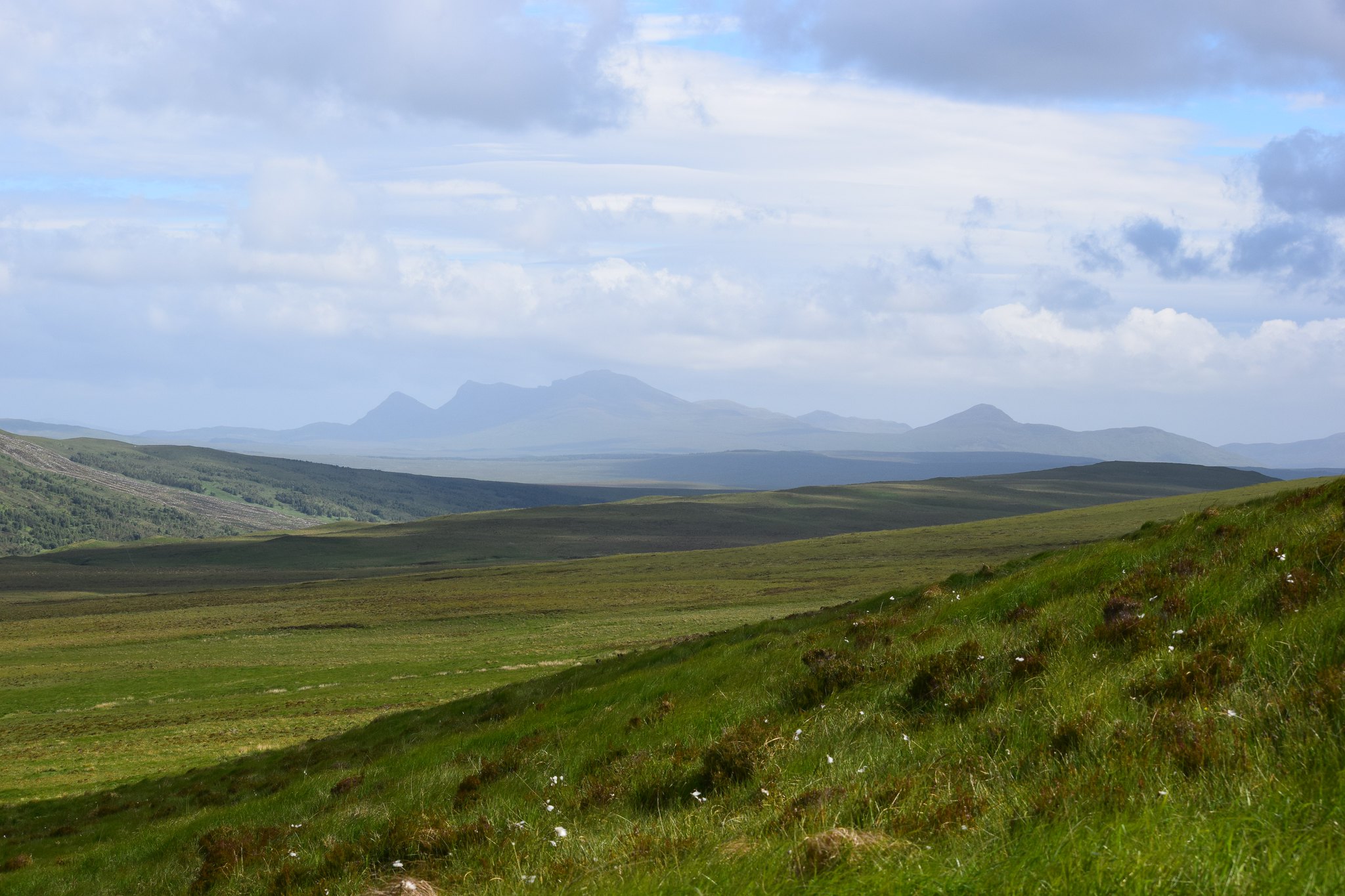 A bit boggy underfoot, but nothing compared to Ben Loyal in April, and I was soon at Cnoc Sgriodan. It looked like a good place for a coffee and a stop to look at Bens Hope and Loyal.. 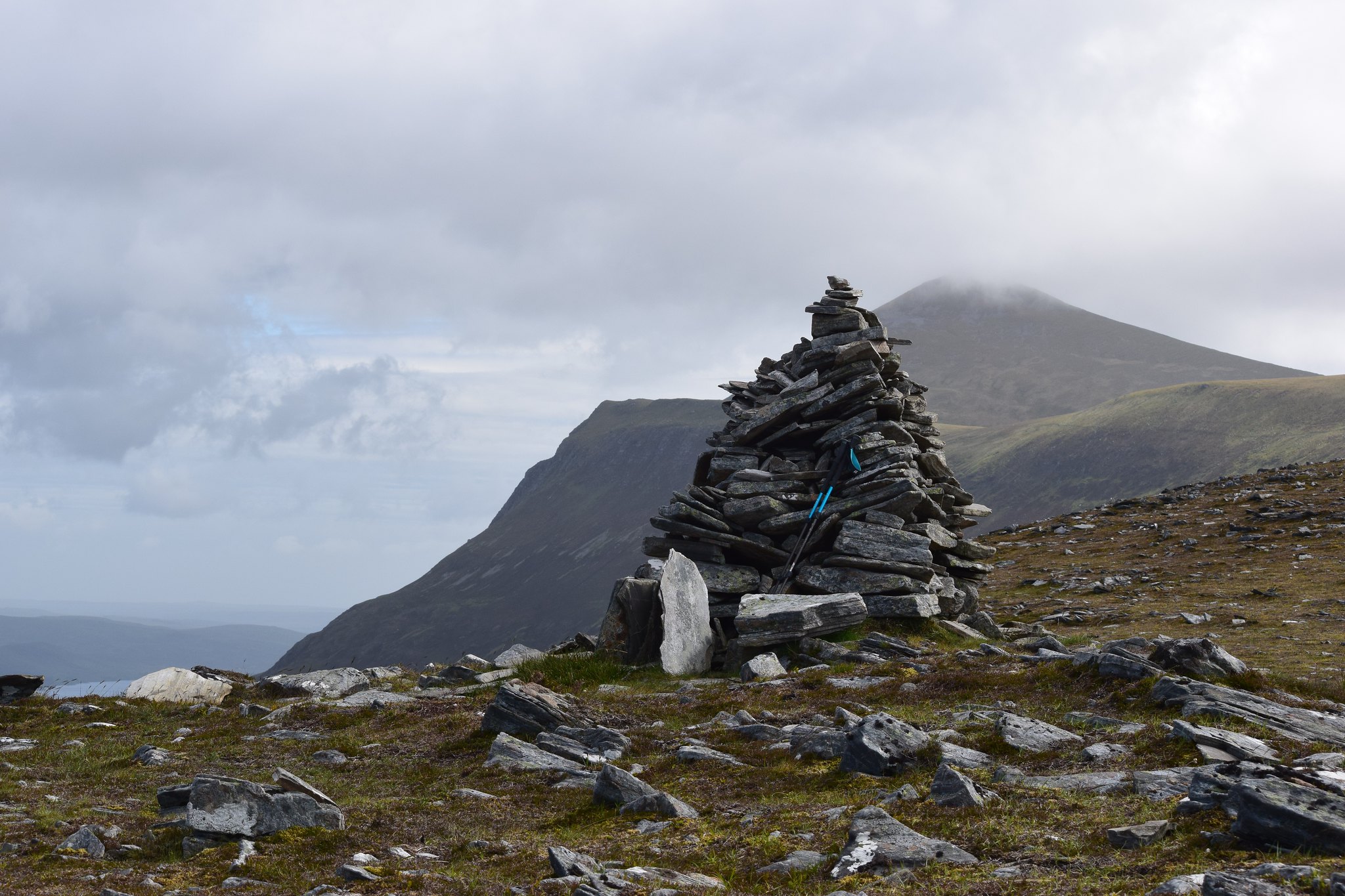 This was where, looking down on to Loch Naver, I found myself imagining what it might have looked like when it was inhabited.

The silence, apart from the wind, was incongruous up against the pictures forming in my head. And then out of the silence I heard a plover. 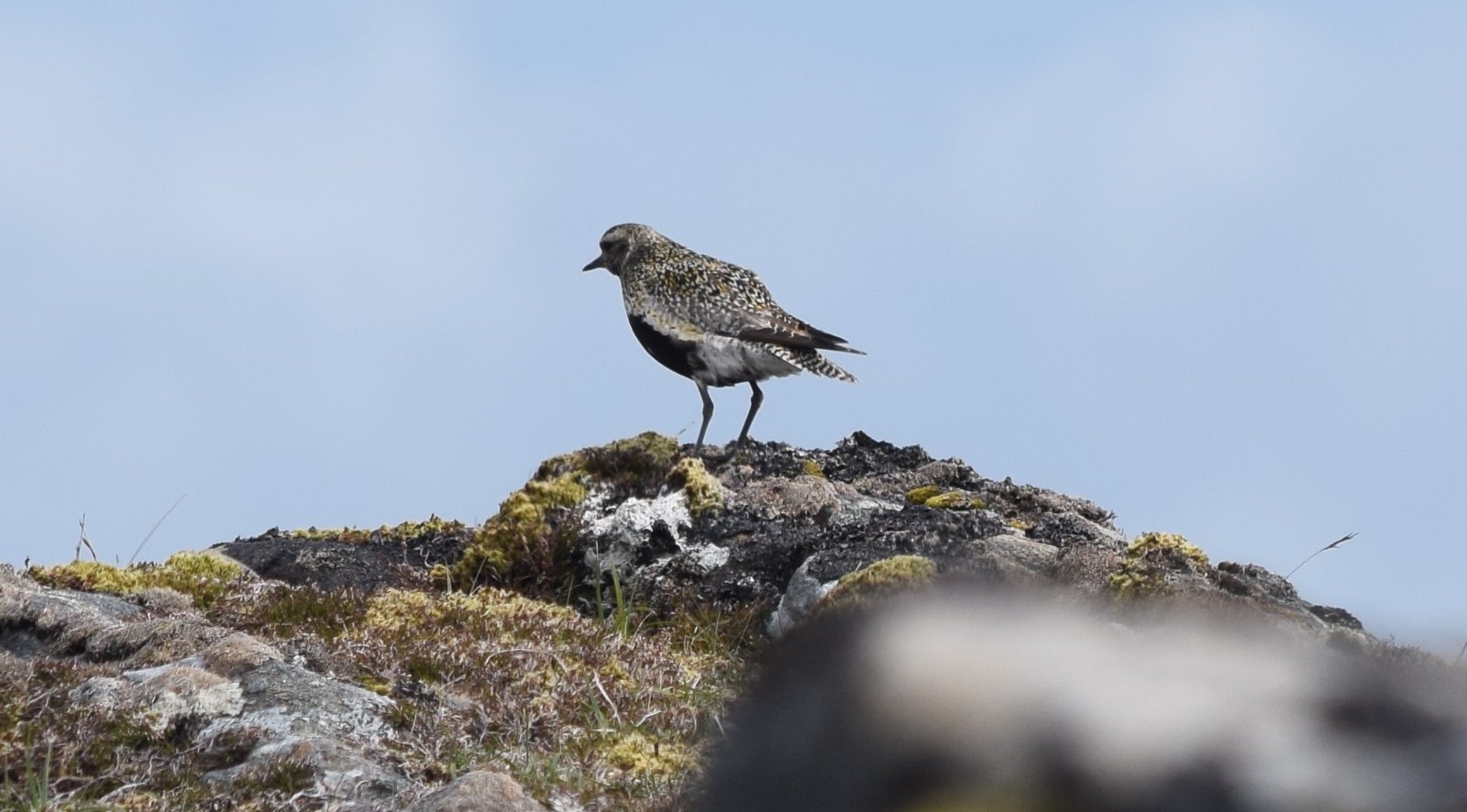 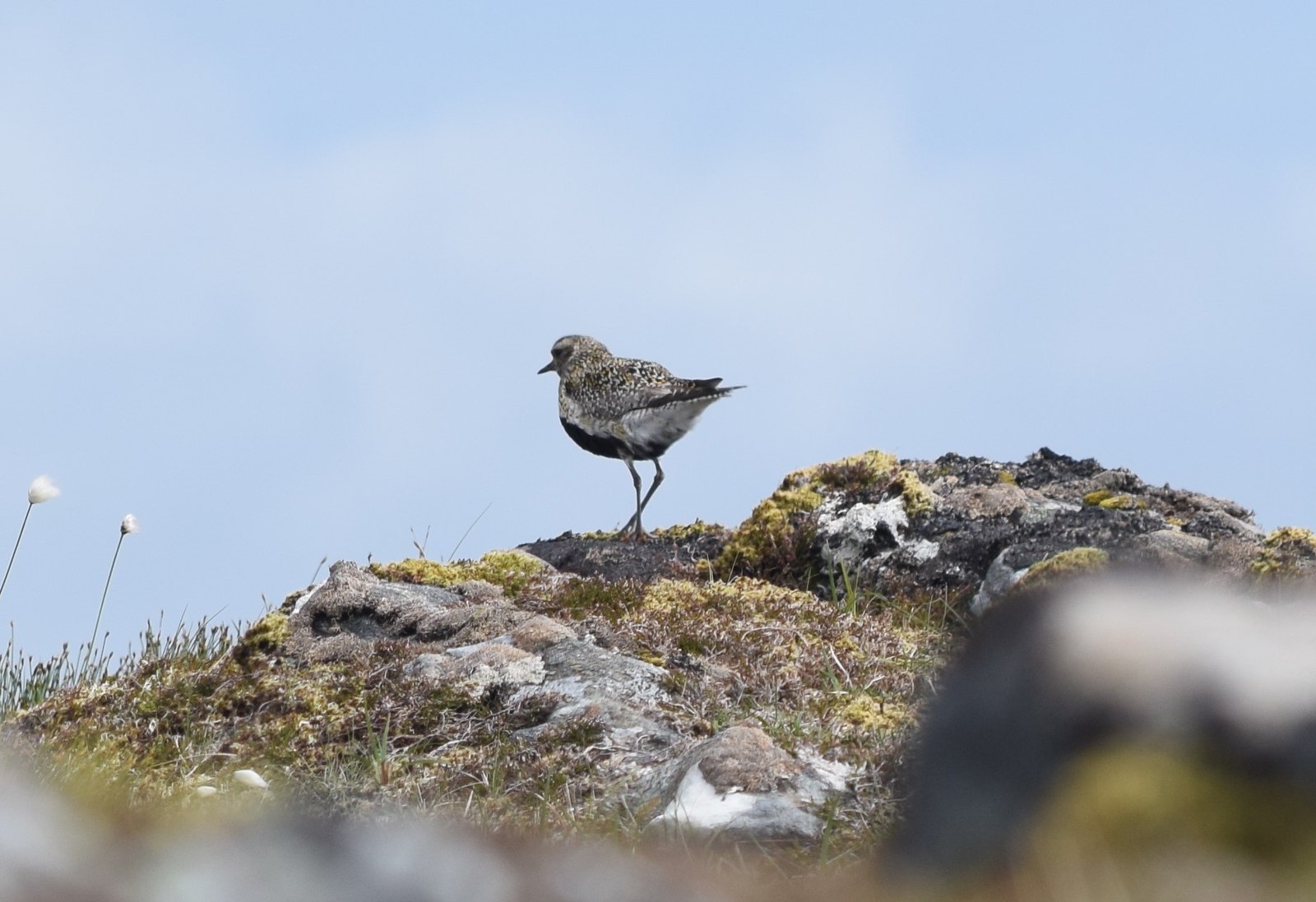 Beautiful little wader which visits us down south in the winter

Then it was a drop down into the bogfest before the bealach. The bog cotton was waving cheerfully in the wind. 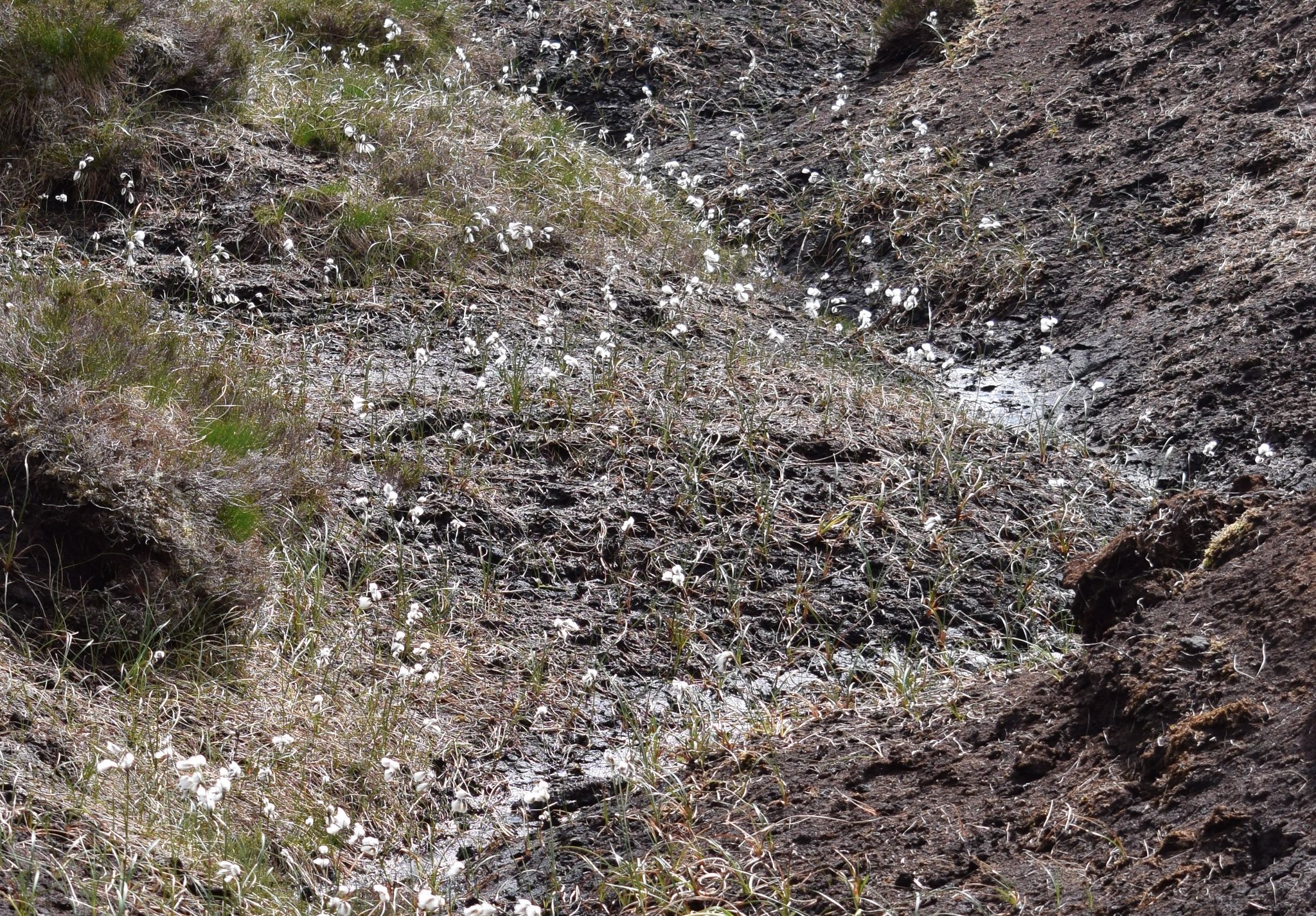 Bog cotton happy in its swamp

And the dwarf cornel was in flower all around me, happy in its peaty habitat. 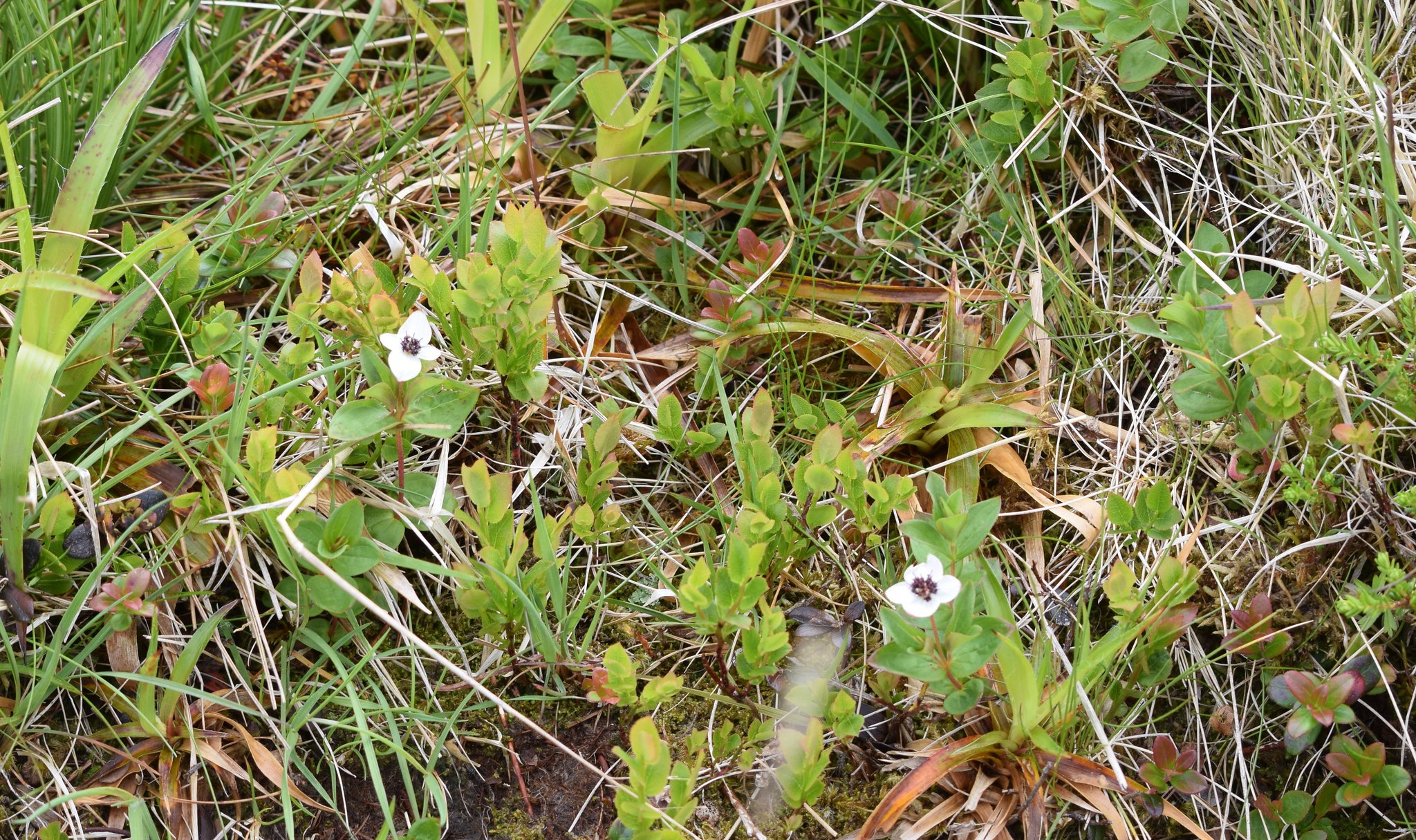 The white 'petals' are bracts and they protect the little flowers in the middle from the elements while also attracting bees and flies to pollinate them. They're one of those great little plants which shoot out their pollen super-fast - in less than half a millisecond. It's one of the fastest plant actions you'd find anywhere, and here it is on the otherwise less-than-dramatic Ben Klibreck. So, if you climb this hill and experience that niggling wish to be on something more pointy and varied, you could add to your mild frustration by waiting for the cornel to shoot its pollen out and then fail to catch it on camera. Now wouldn't that be a treat

A bit further on, out of the bog and just below the cone, a ring ouzel was hopping about looking for food. They're another visitor to us down south, and one sometimes drops down from the neolithic flint mines behind where I live to see what's on offer in my garden. I gather they also hang out at Glenmore Lodge. 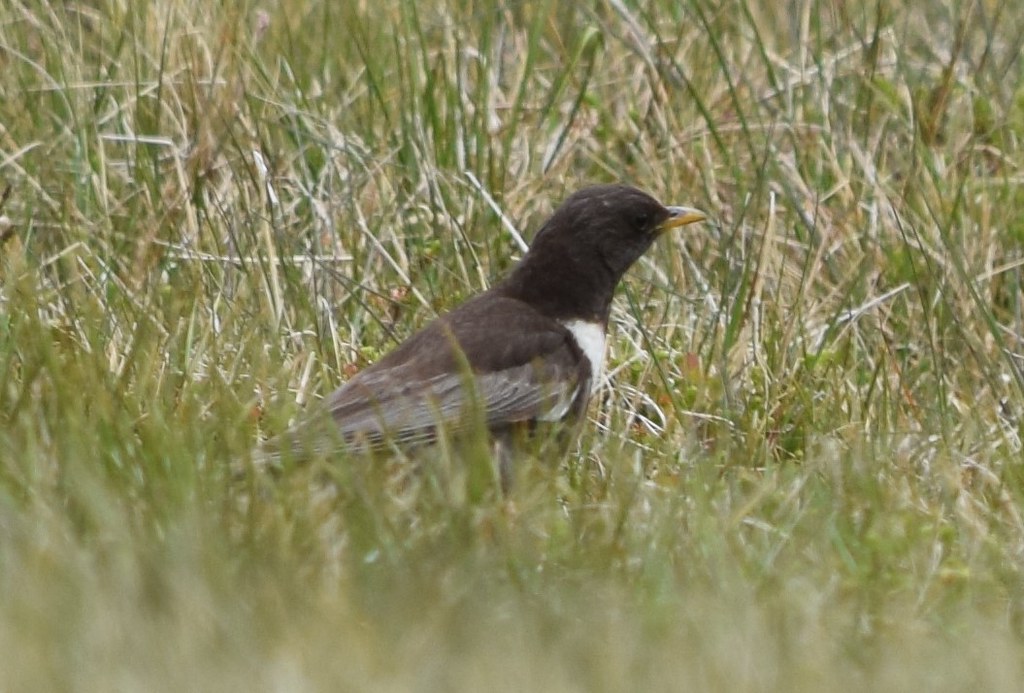 On this windy day I met just two other people, at the foot of the cone. They were struggling down in the high wind, so I skirted round a bit to the south to get out of the worst of it. Sheltered now, and with the sun beginning to warm up both the hill and me, I made the most of the lovely solitude, the warm sun on my face and the quiet. 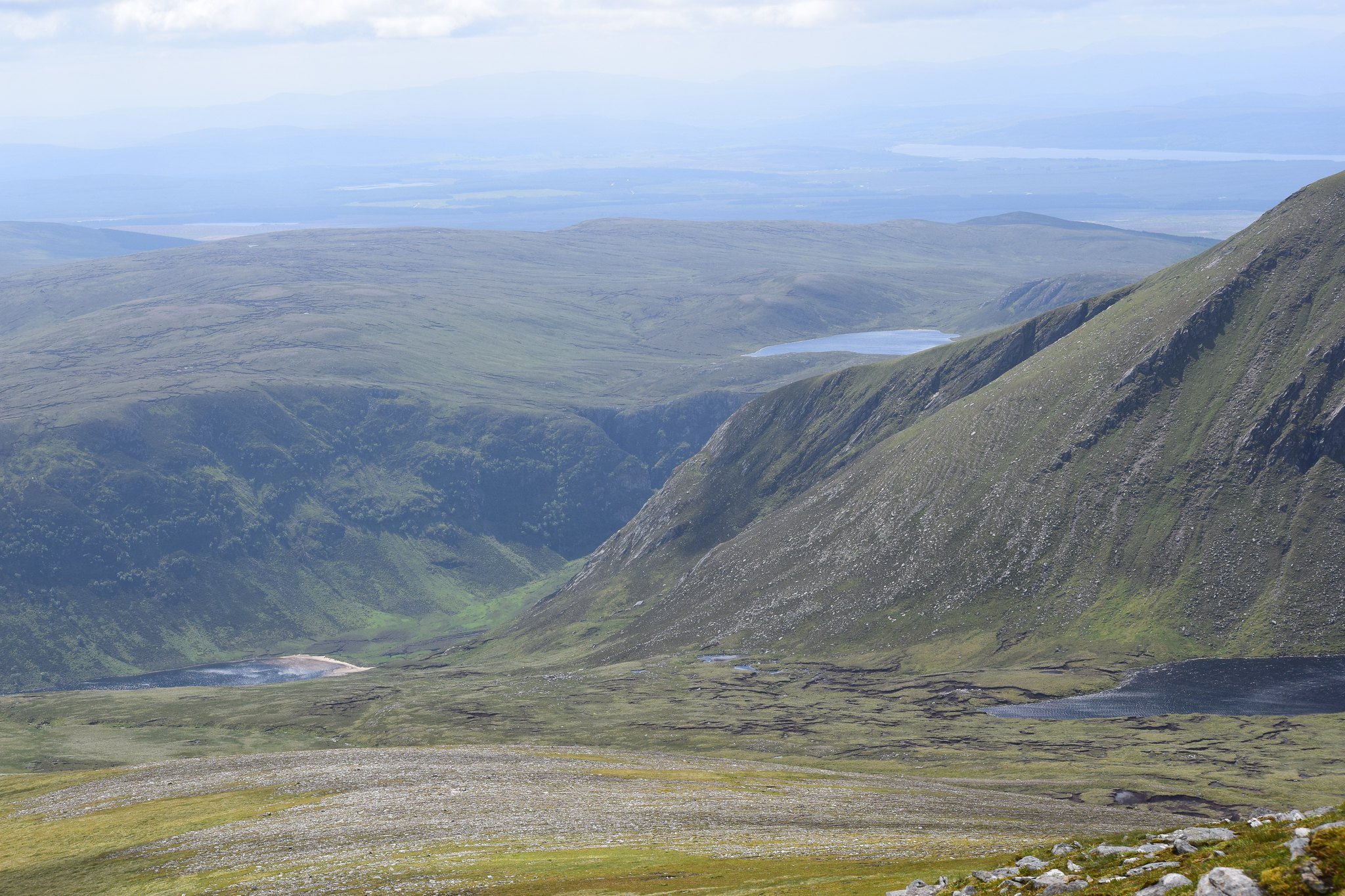 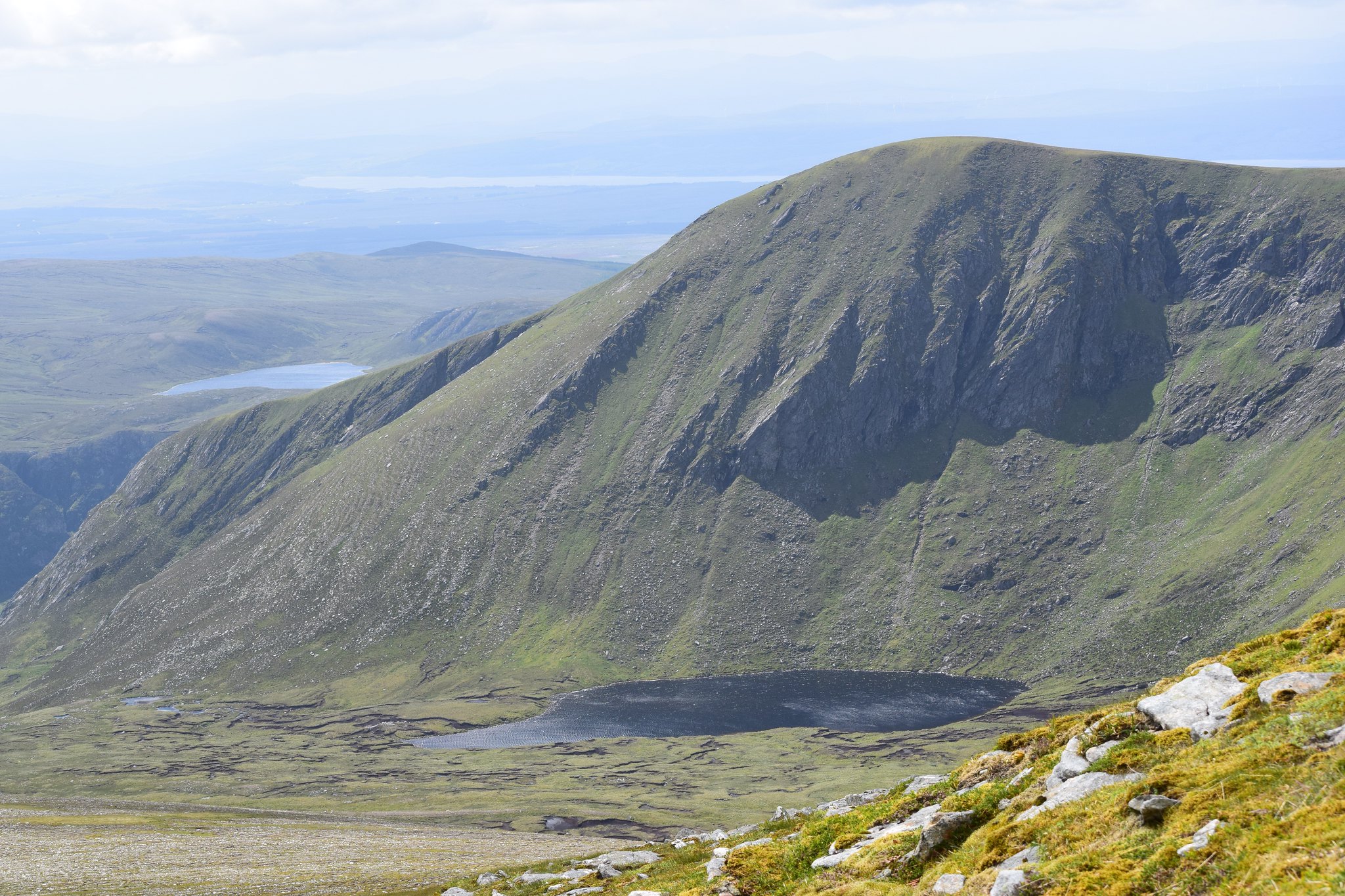 Loch Shin in the distance, where a couple of days later I watched an osprey catch a fish.

Bens Griam Mor and Beg and Strath of Kildonan

Sneaking up on the trig point as I was, to stay out of the wind, I found a little ruin just NE of the Con summit. Shieling? Or original surveyors' shelter? 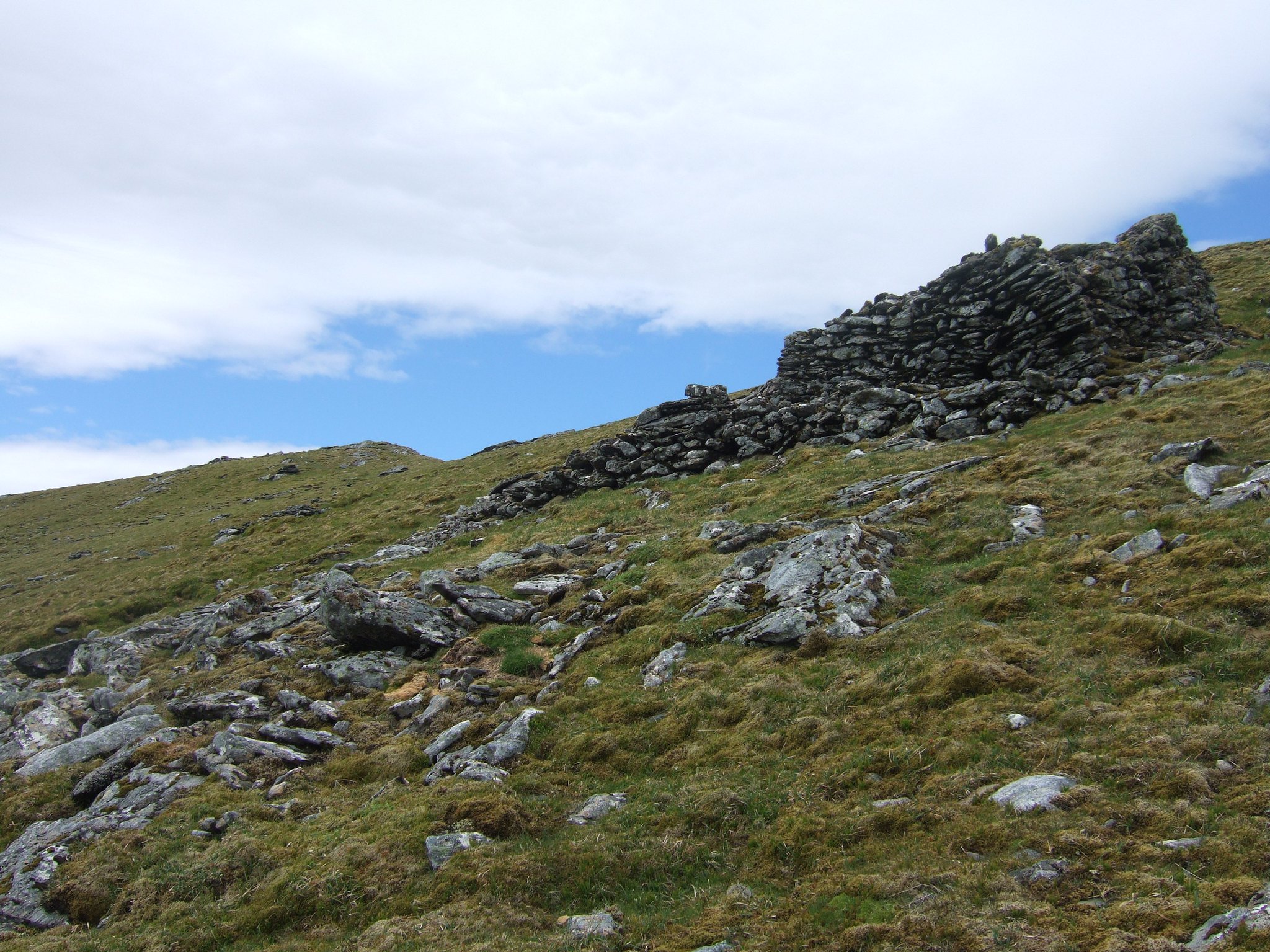 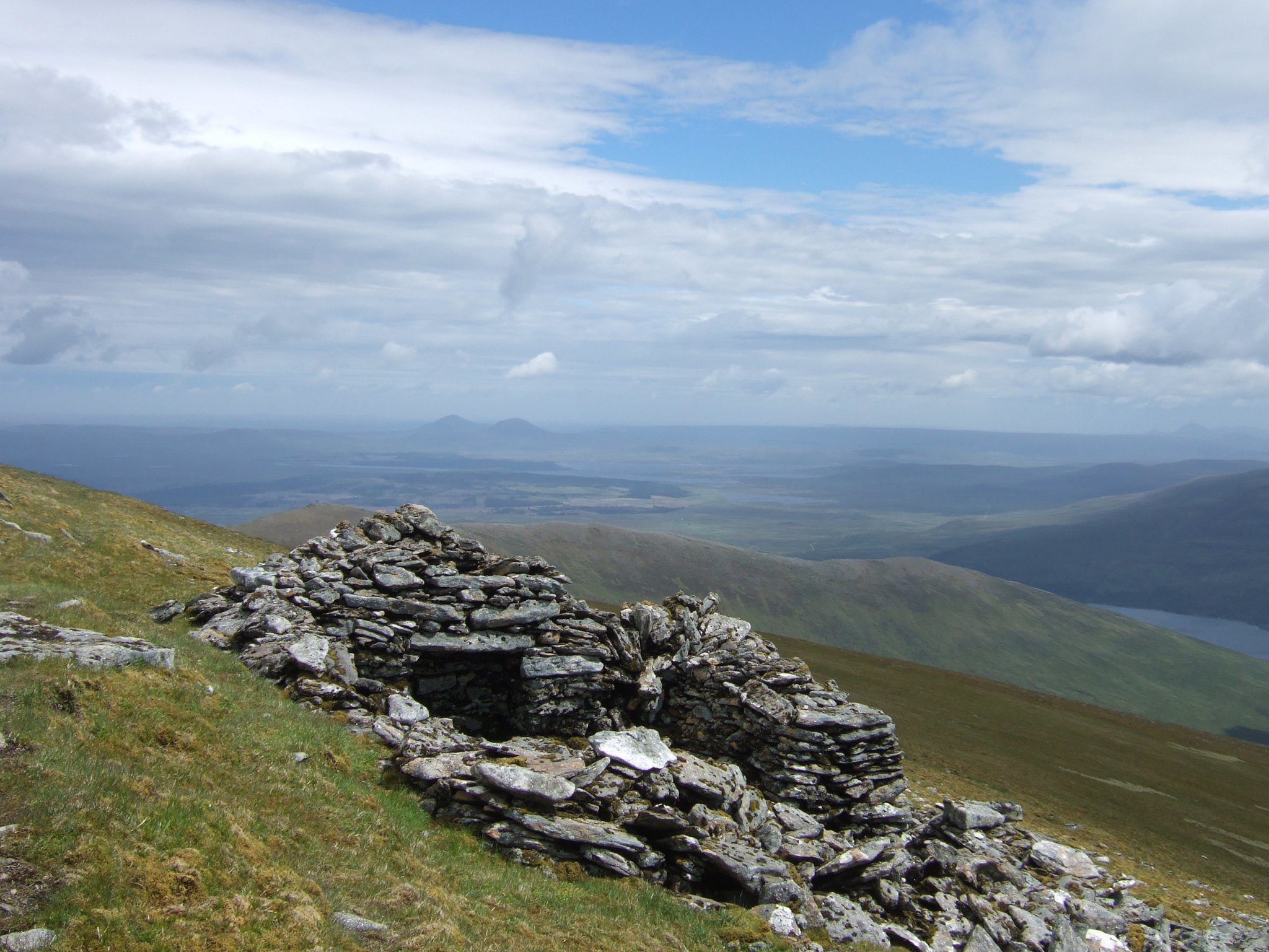 Then it was back into the wind and up to the broken trig on the summit. 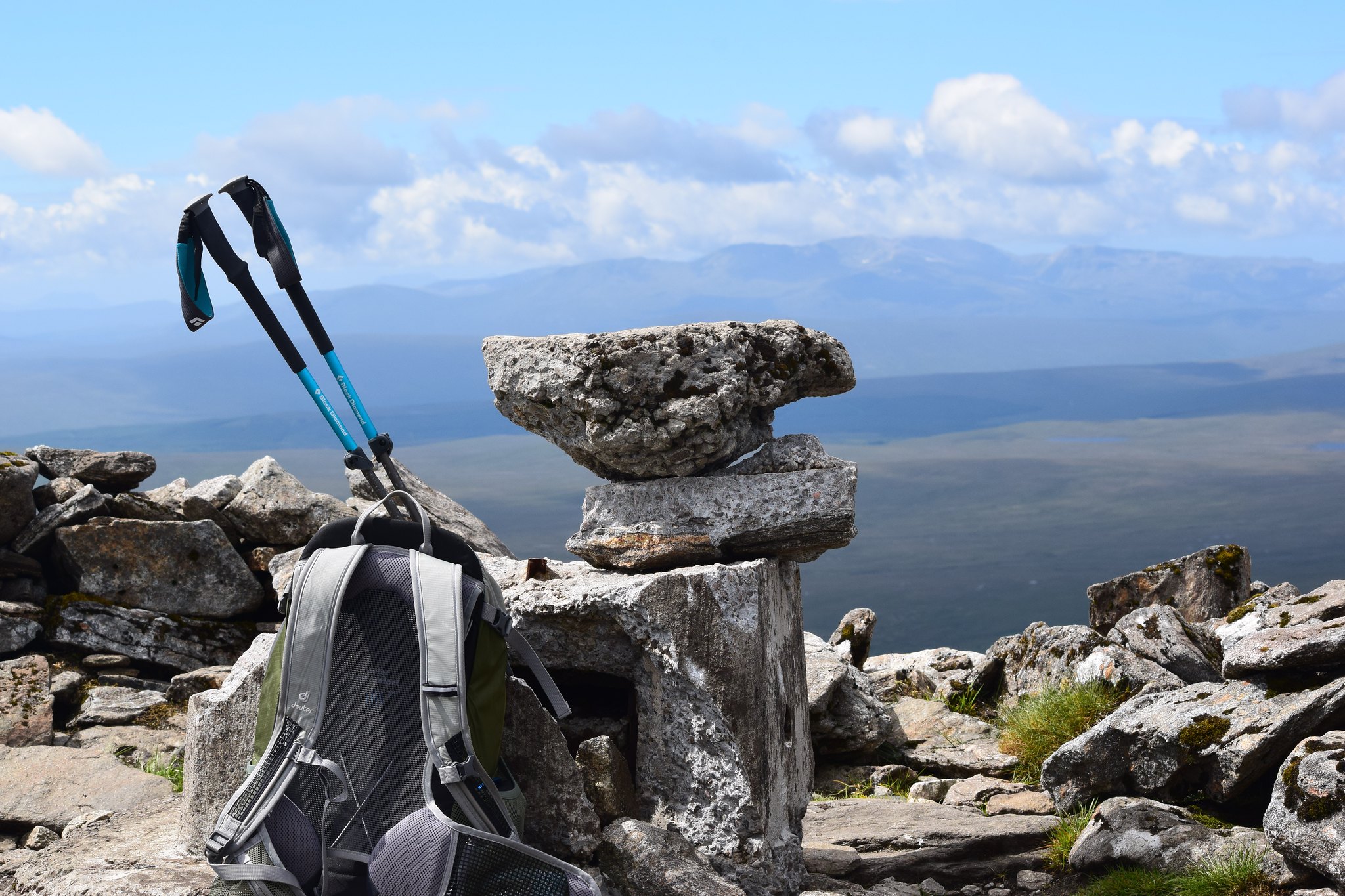 Windy summit with Ben More Assynt and Conival behind 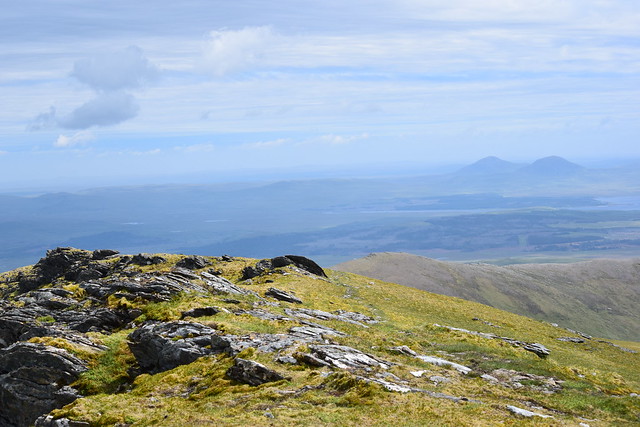 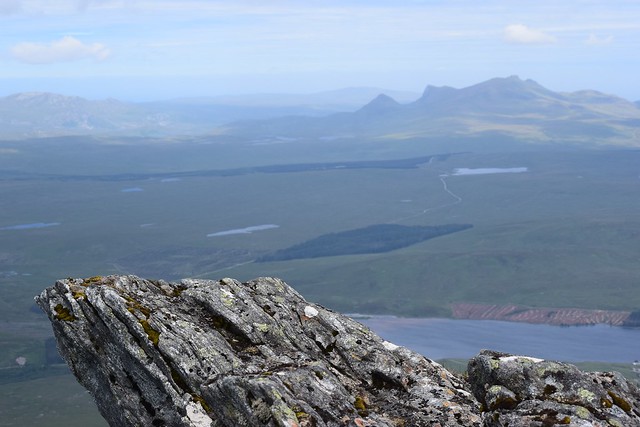 Ben Loyal and a bit of insensitive plantation stuff

Inside the broken trig is a box of some sort. Wonder what that's about. Wondering was all I could do - it's not really accessible. 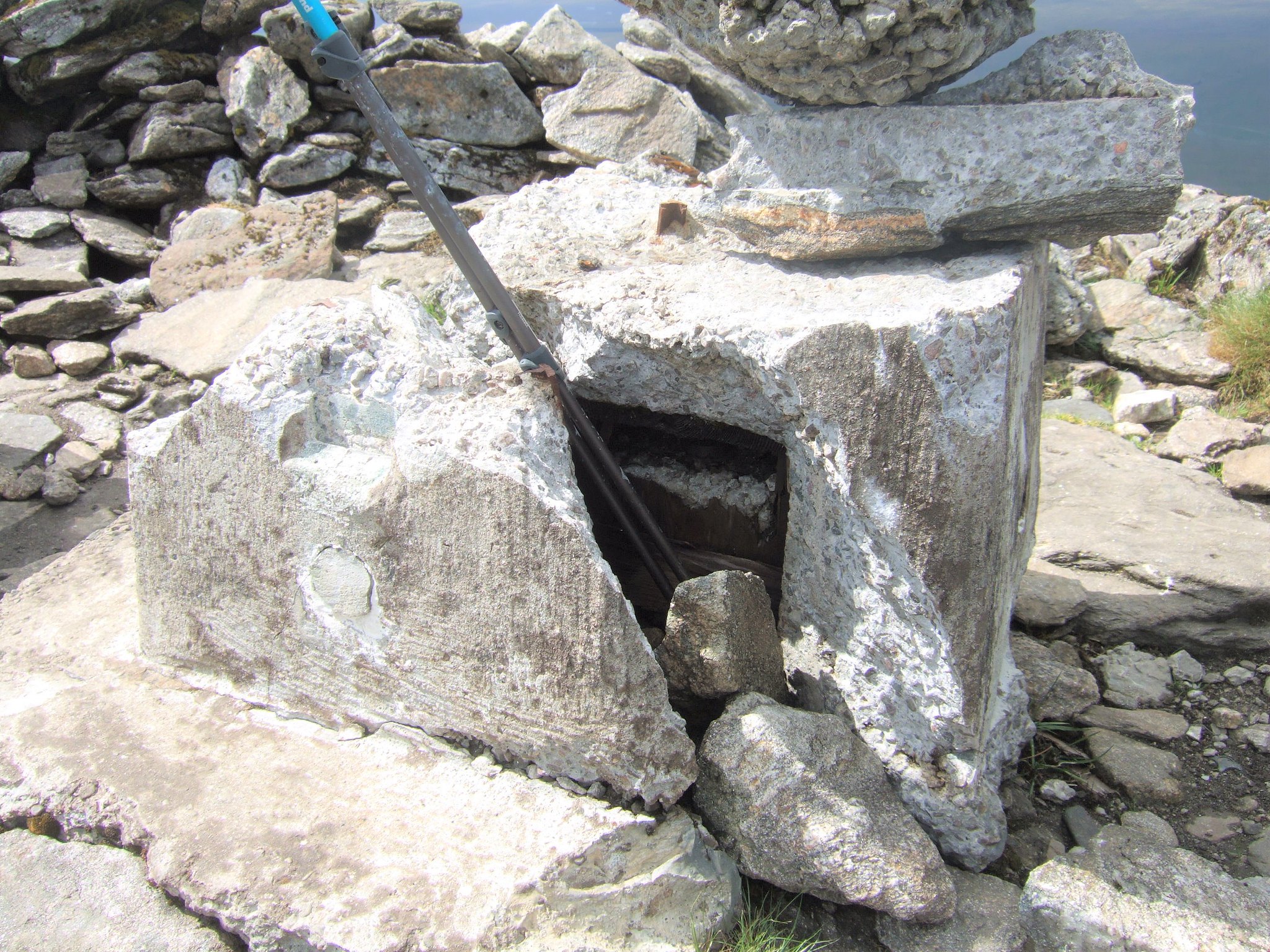 Is that a kist o gold?

I was unimpressed by the broken eggshell (chicken) up here. Left by the two people who'd been struggling down? I picked up as much as I could and carried it out. 'Leave nothing' - it's not that hard is it? Grrr. 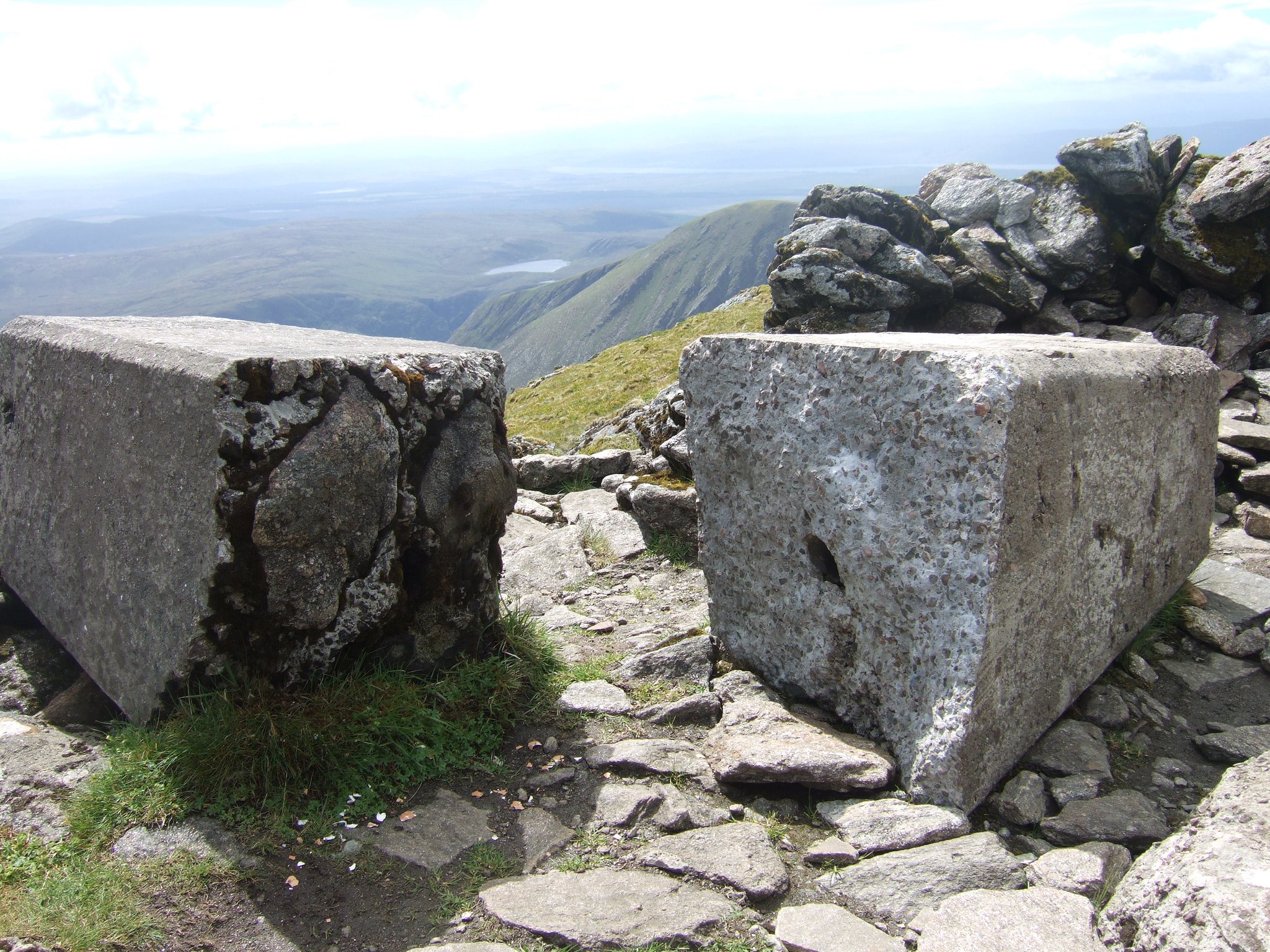 After that, and a linger, and my own lunch, down I went with a stop at the Crask Inn in mind. On my way down I found a pair of ptarmigan. The sun had gone back in and they were very effectively camouflaged against the sparse outcrops of rock (well, I might not have have seen them if they hadn't been running about). 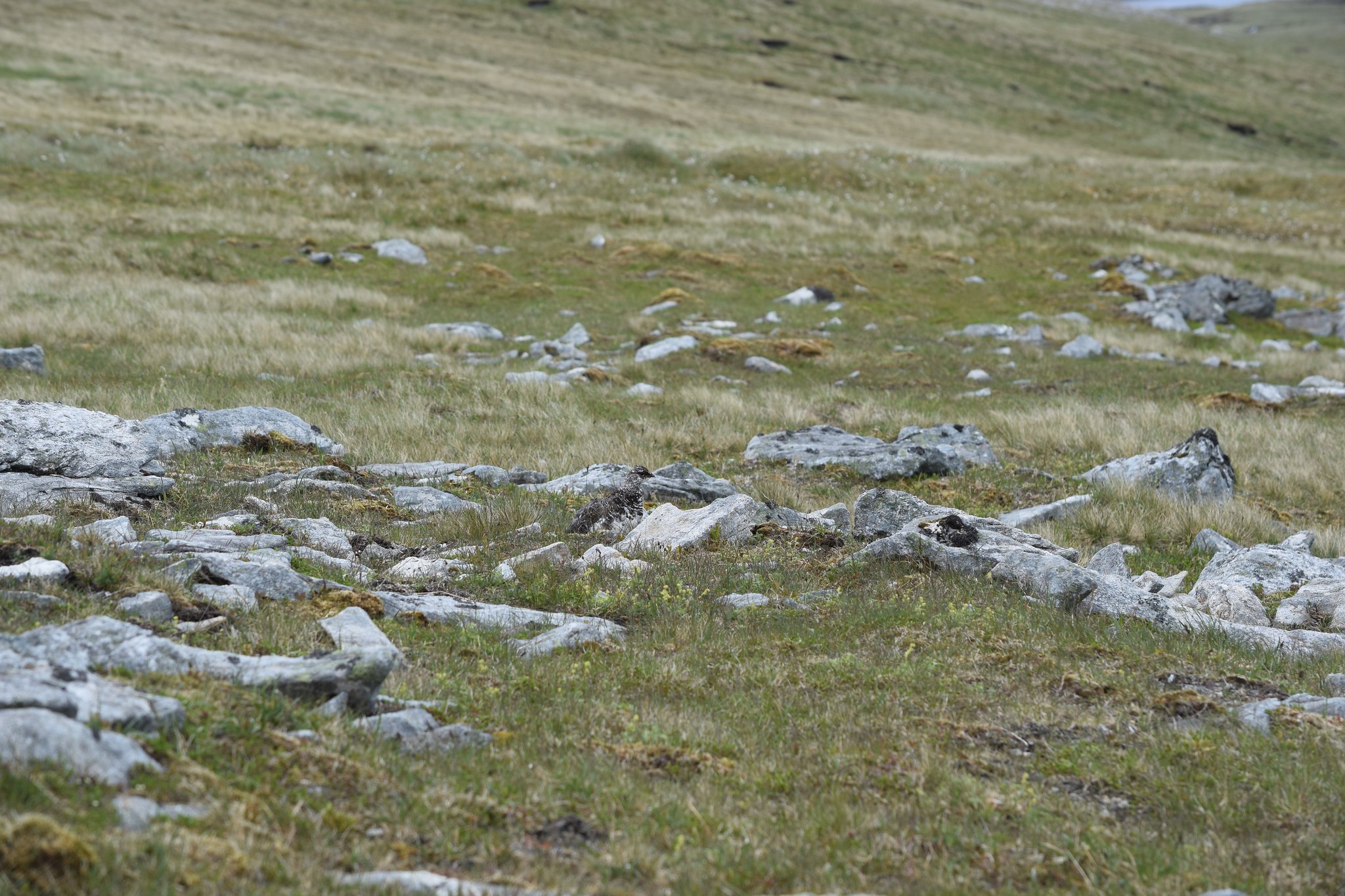 The male wasn't going to sit down, so his is a blurry portrait.

Blurry male on left, guarding his sitting hen to the right.

Then it was just the trudge back to the two cairns of Cnoc Sgriodain... 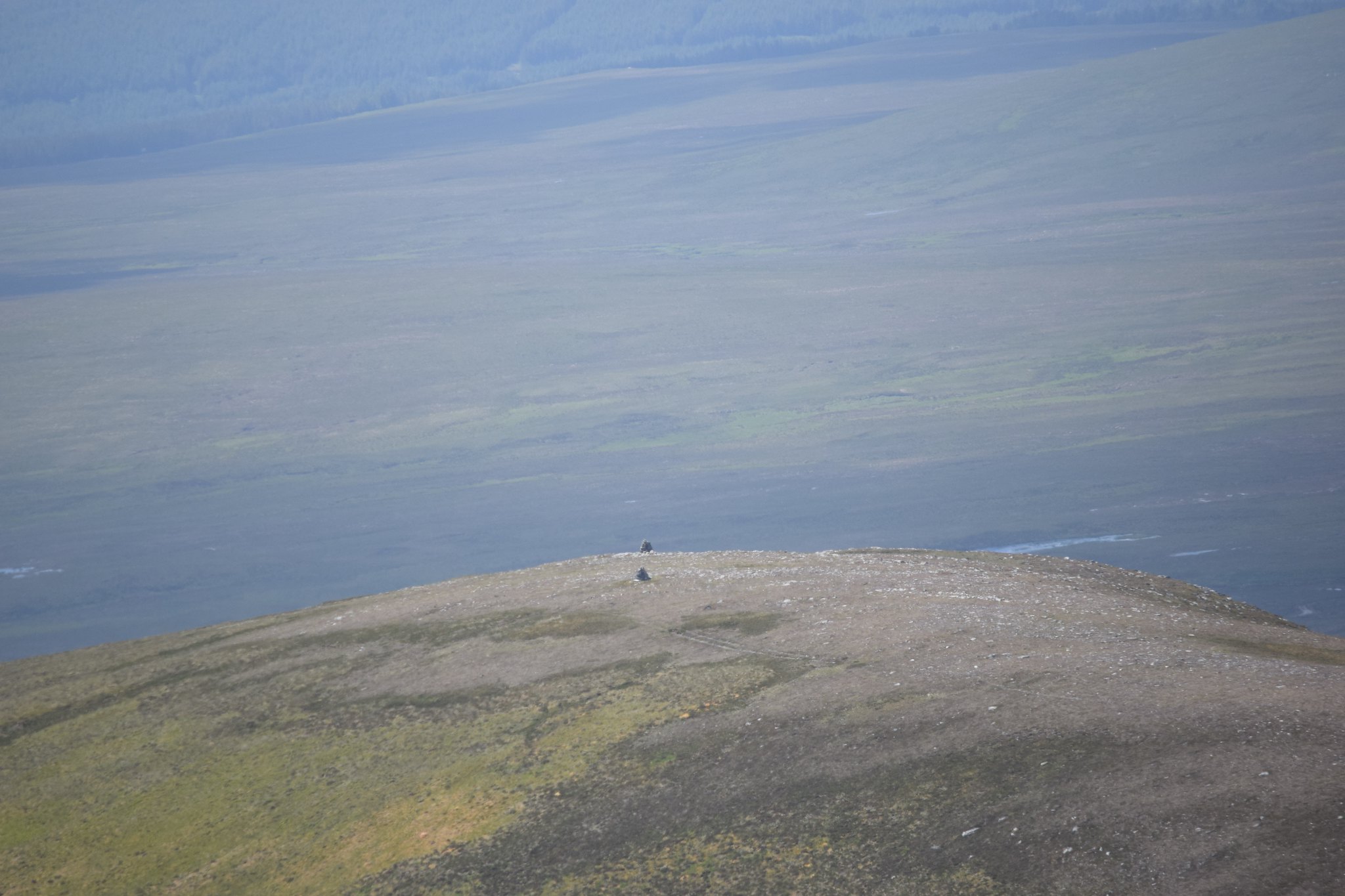 ...a glance back up the heathery lichen-y track to the Con... 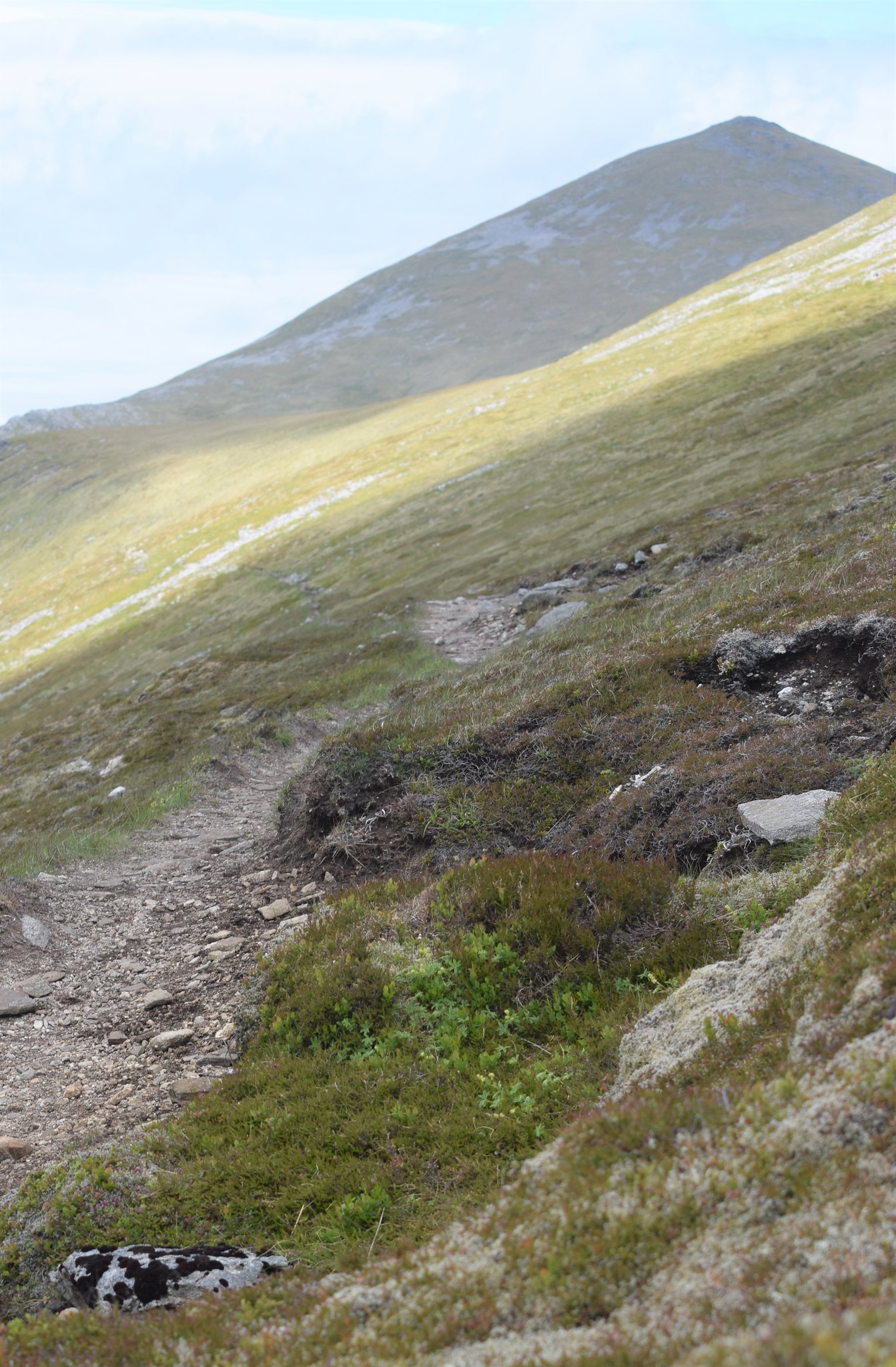 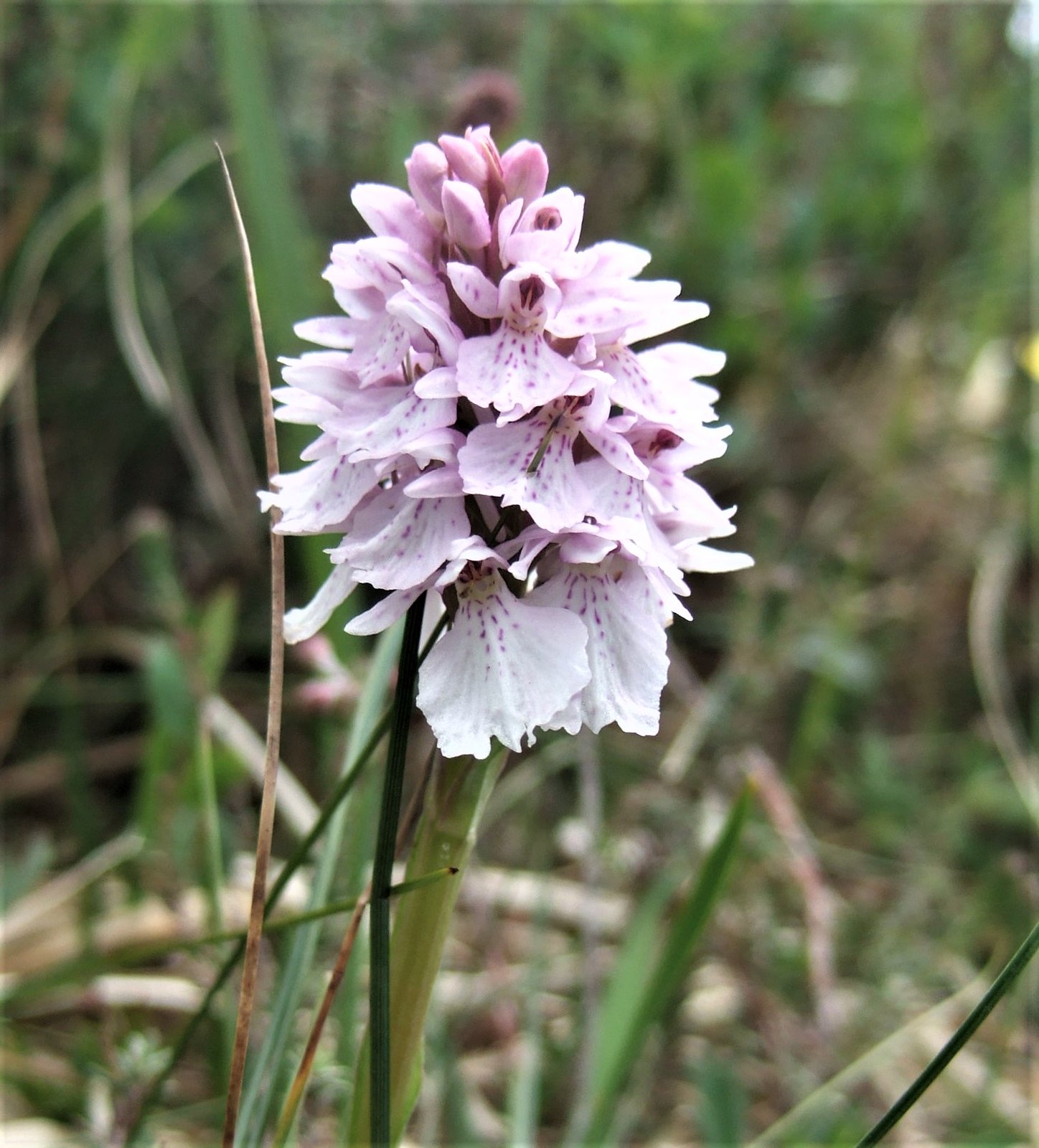 Then down the road to the Crask. I met two cyclists there who'd ridden for 13 days from Penzance, averaging 80-90 miles a day. While that way round would make sense normally, and was pretty good for them today, for most of their trip the wind had been coming from the north, so they'd been up against it all the way. Douglas, the landlord, appeared greeting me with "Do you know the one about the vegan, the vegetarian and the coeliac who walk into a pub?" (ref our visit in April when, with a decent amount of notice, he'd done us proud).

I left when the cyclists left for Bettyhill so they wouldn't have to have me overtake them, and made my way up the road to Tongue.

A lovely report and photos. I do like your nature notes and look forward to your future capture of the cornel pollen release!

I was unimpressed by the broken eggshell (chicken) up here. Left by the two people who'd been struggling down? I picked up as much as I could and carried it out. 'Leave nothing' - it's not that hard is it? Grrr.

It is frustrating when litter is encountered, you would think that people climbing hills would have some understanding that it is not acceptable. Egg shell, banana skins and orange peel are some of the most common encountered. I think some people think that it is ok to leave organic matter not realising that 1) at the average temperature at the top of a hill they would take years to break down 2) they upset the natural balance of the nutrient poor terrain. Never mind the visual impact.

Great report, and some cracking pics - the sky on the "2 cairns" pic is amazing. And you had some excellent weather to enjoy Assynt in, lucky you.

Like Rohan, I love the wildlife bits - especially as you seem to have the most astonishing good fortune on the ornithological side!!! (PS The golden plover has a real look of a grey plover, though I believe the latter don't breed in the UK so it couldn't be one).

rohan wrote:A lovely report and photos. I do like your nature notes and look forward to your future capture of the cornel pollen release!

I've started reading your first Watershed WRs, by the way - they're a real treat!

rohan wrote:It is frustrating when litter is encountered, you would think that people climbing hills would have some understanding ...

Heck yes. Who are they?!

Alteknacker wrote:And you had some excellent weather to enjoy Assynt in, lucky you.

You're absolutely right about golden and grey - I didn't question because of the context: "It's on a hill, it must be golden" said the voices in my head. Have I even ever knowingly seen a grey plover...? Not sure. You've given me something else to look for

- though it's not rare. i was lucky enough to see a pair of dotterel on this hill, but I haven't seen a ring ousel for ages and they used to be so common

Ben Loyal and a bit of insensitive plantation stuff

Unfortunately its going to get a lot worse soon. Huge wind farm got through planning.

The sort of report that could entice me up a hill.

I like your style. The attention to detail, the leisurely pace of both report and walk. Keep it up!