I’d been at the Rumblie since the Friday before, and was on my way home. I had nary a hill to show for the four days, and rather than my usual exhausted, but euphoric post-jaunt mood, I was in a grand funk. I’d needed some wins, and some hard physical work, to take my mind off, at least temporarily, the abysmal and unnerving changes that have gone down at work over the past few weeks (2/3 of my team laid off; my own future as yet unknown).

I knew the weather was going to be tempestuous (at best), so I’d made a list that included Corbetts, Grahams, and a few sub2Ks, figuring I was set for all eventualities; in the end, none came to pass.

On Friday, my plan had been Meall nan Eagan (G) and/or Creag na Doire Duibhe (sub2K)—two quickies, both easily accessible from the A889 (aka the Dalwhinnie road). When I reached the start point for Meall nan Eagan, the dark and ominous clouds encroaching spurred me to drive on a bit further to the start point for CnDD (the Raeburn SMC hut, otherwise known as the Halfway House). By the time I’d parked there, the sideways snow meant I wasn’t even tempted to stick my nose oot the car, much less get kitted up and head up the nearest hill! It was still early – about midday, I think – so out came the kindle. Several squalls passed through quickly, but even during the breaks, the wind was Baltic, and the next shower never far away. During one of the lulls, a man approached from the hut; we had a quick chat, and he said he was just going to head down the track to the loch (Caoldair) to get a bit of fresh air. He returned fewer than 10 minutes later with the news that the river ford (not on the map) had scuppered his plans. He invited me into the hut for a cuppa and a natter; if nothing else, I was keen to have a wee nosy around the building, having driven past it many times.

Saturday dawned snowy, with no respite in the forecast. In fact, MWIS used the word “appalling” wrt visibility. So no going to any height, then, and I wasn’t particularly keen on driving anywhere, either. I walked up the glen road as far as the Spey Dam, then across toward the A86 on the construction track. I turned right at the junction signposted for the hill fort. After only a couple hundred meters on the forest track, a footpath (no signpost) tempted me up the hill through the forest. It soon diverged into various other paths, some of which were very steep and slippy, even necessitating hands-on once or twice. There were man-organized structures scattered around, and I realized that I was probably following “official” Wolftrax biking routes. So I kept an eye (and ear) out for any cyclists barrelling down the hill.

I’d toyed with the idea of following the ridge along to Creag Ruadh (G). It’s more commonly approached from Sherrabeg (near the loch formed by the Spey Dam), I think, but the map showed that it should be easily doable from the hill fort/A86 side also. Well, in decent conditions anyway. As visibility was – ahem – appalling (as promised) at the wee summit of the hill fort, I decided to give it a miss, and follow the longer, but much gentler route on the forest track back to the point at which I’d initially headed up the hill. Even on this benign terrain, I managed to fall over, leading to some spectacular bruising and a tear in my new NF jacket.

I tromped back the way I’d come, choosing a longer tarmac experience over having to walk even a short distance along the A86 (shudder). The outing was rounded out by a toastie at the next-generation “Coffee Bothy” on the corner (don’t ask about the now-departed Canadians, unless you want to get thrown out on your ear

The forecast was slightly more benevolent today, except for the northern Cairngorms. I knew there was a track nearly to the summit of this Corbett; how hard could it be? When I left the car, the sky was mostly clear, and I thought I just might be lucky enough to get one of those spectacular winter walks. HAHA. 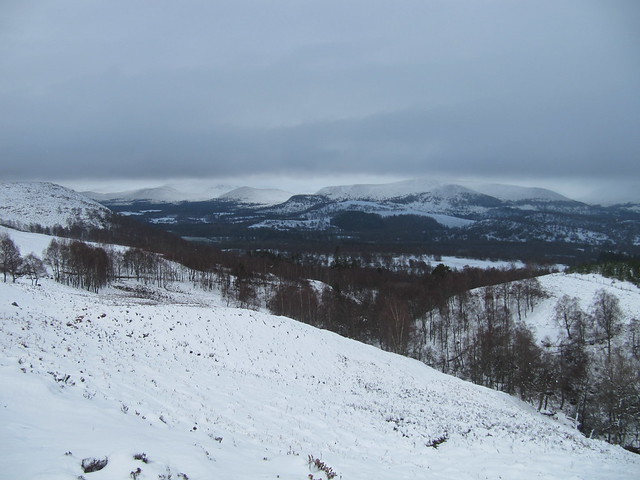 the view, whilst there was one. It didn't last.

Before long, the sideways snow had kicked up again, and I stopped to put my waterproof trousers on. Just a passing shower, I thought. HAHA. As I trudged upward, the lying snow became deeper and deeper, and the sideways snow was blowing directly into my face. It wasn’t long before I realized that a) the snow wasn’t stopping, b) I was unlikely to get any views – of anything – from the top, and c) I wasn’t enjoying the experience even a little bit.

I mooched around Aviemore for a couple of hours before driving back to Newtonmore for a cake and a coffee at Wild Flour.

Typically, today’s forecast was the best of the lot. I’d not given much thought to doing anything but coming home, driven mostly by wondering if anything more had happened at work** during my Friday absence.

But when I reached the Dunkeld exit, blue sky beckoned, and I made a last-minute decision to nip up Birnam Hill. I knew it was signposted (and I’ve followed other parts of the Dunkeld-Birnam paths network), which made for a good spontaneous plan that wasn't supported by having the correct map or trusty WH desc.

Boots on, dump most of the contents of the rucksack, and I was off. It felt good (and a bit odd) to be moving upward with purpose, unimpeded by snow or wind. There was a bit of snow on the ground, and a couple of the steeper bits were slushy and quite slippery. My original plan was to come down the same way I went up, but I remembered reading that one side of the hill was much steeper than the other. Of course, I couldn’t remember which side…

The side I was on steepened considerably near the summit; I didn’t fancy coming down it without my poles (poor planning). 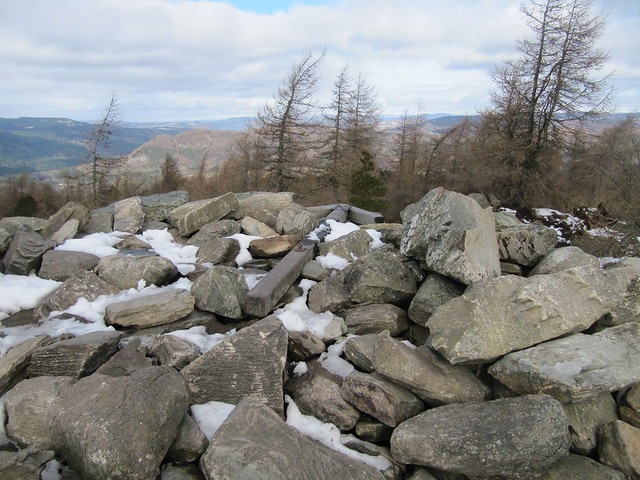 So I decided to go down the other side, which was, of course, the steeper side. I managed to keep to my feet the entire way, but only by shuffling down on my backside over a lethal icy bit immediately below the summit, then hanging onto trees (for dear life) most of the rest of the way down. 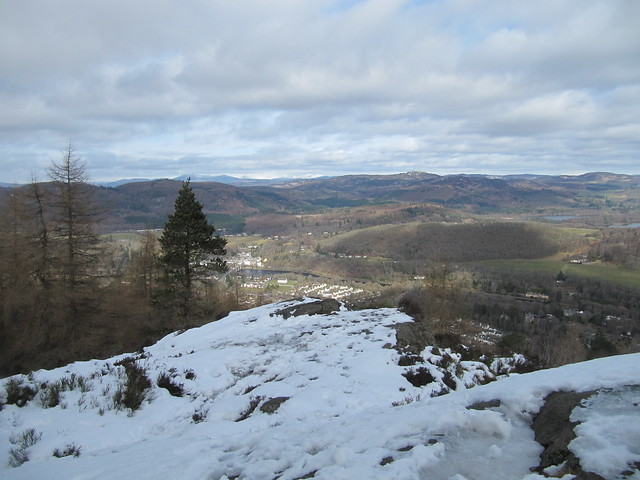 nice view down to Dunkeld

It was a huge relief to finally get below the snow line, which was pretty far down, given that I was on the north side of the hill. Two hours saw me safely back to the car, knees a bit sore, thanks to the tensed-up and cautious descent.

But I enjoyed it. It’d be worth doing again in less slippery conditions; probably in the autumn. It made up (a little) for a mostly washout weekend.

** apparently, if you get an email that has a subject line “Business update” you’re done for.