Foinaven - from clag to splendour

Foinaven - from clag to splendour


I'd been looking forward to Foinaven for a couple of years but not managed to get there before. I was especially looking forward to the magnificent Cambrian quartzite ridge. The forecast was that there was every chance the clag would lift as the day went on and the views would be fantastic, so carpe diem: a 9am start and a leisurely pace might do the job. Might...

Booted up, I set off, crossing over from the layby on the A838 just north of Gualin House. No sooner was I through the gate when three snipe bolted out from the little brook beside the road. Continuing down into the strath (Dionard) the air was fresh and rang with the calls of sandpipers. 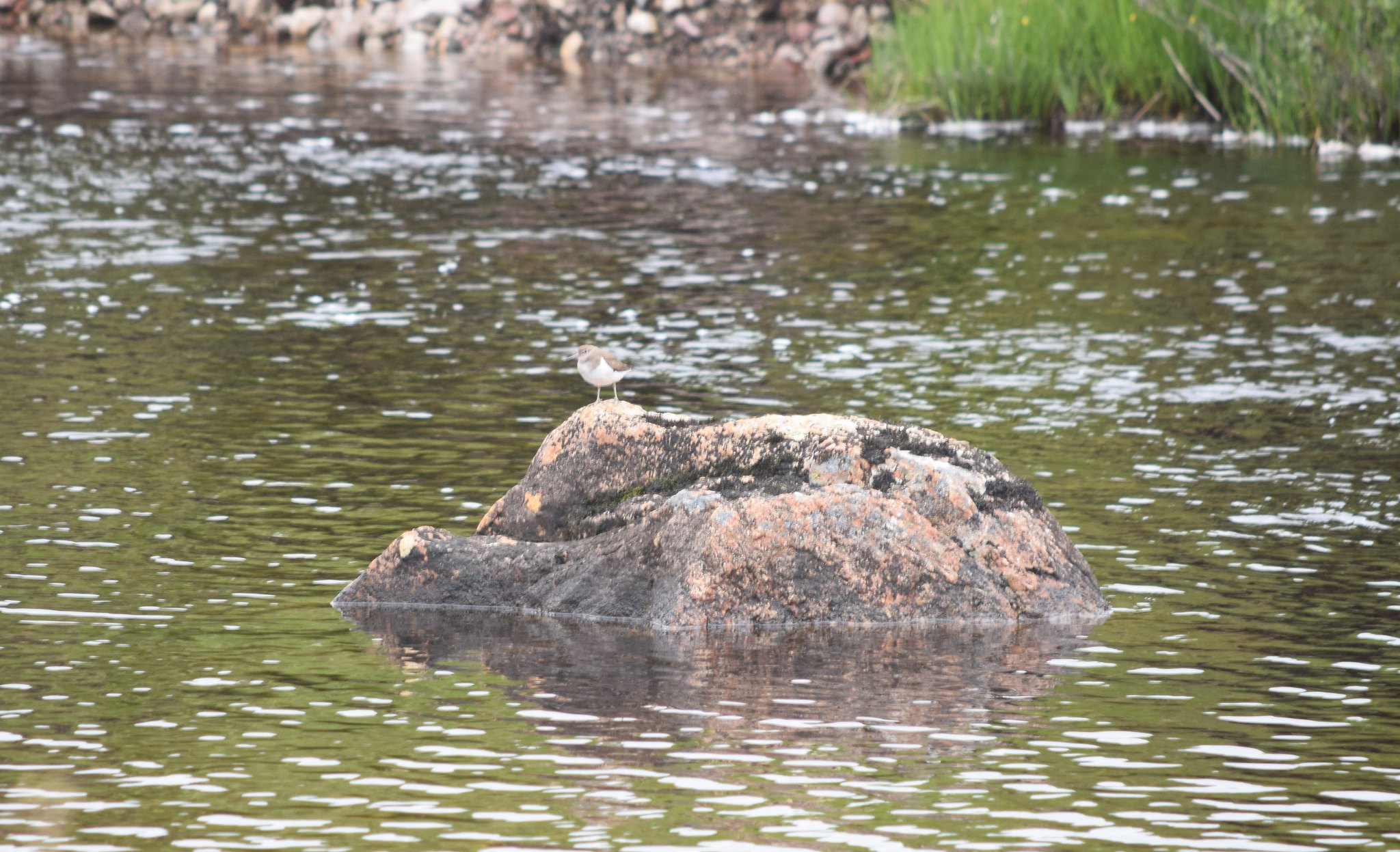 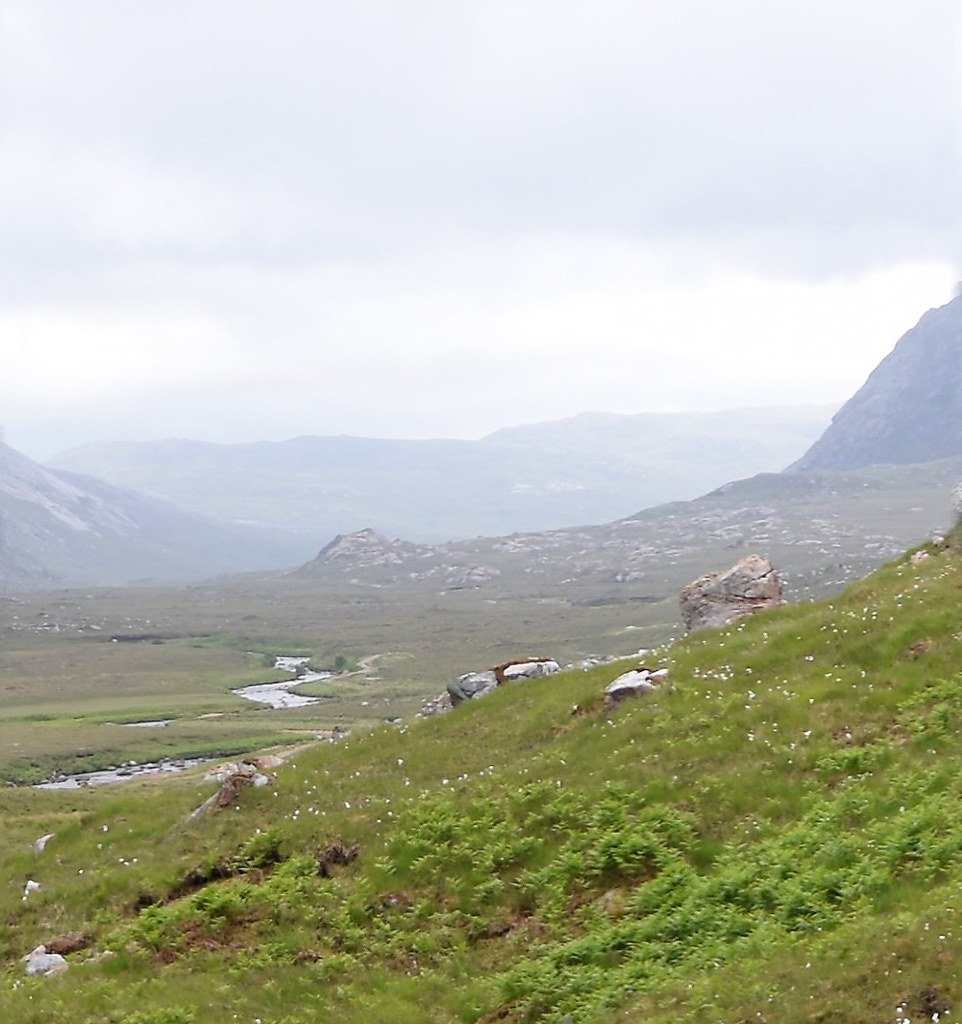 After a couple of dreamy miles, I heard a greenshank calling overhead, looked up to see it circling, and then ahead of me on the river bank a cyclist appeared. He stopped to talk and together we watched the greenshank settle on a hillock. He'd been listening to it too. 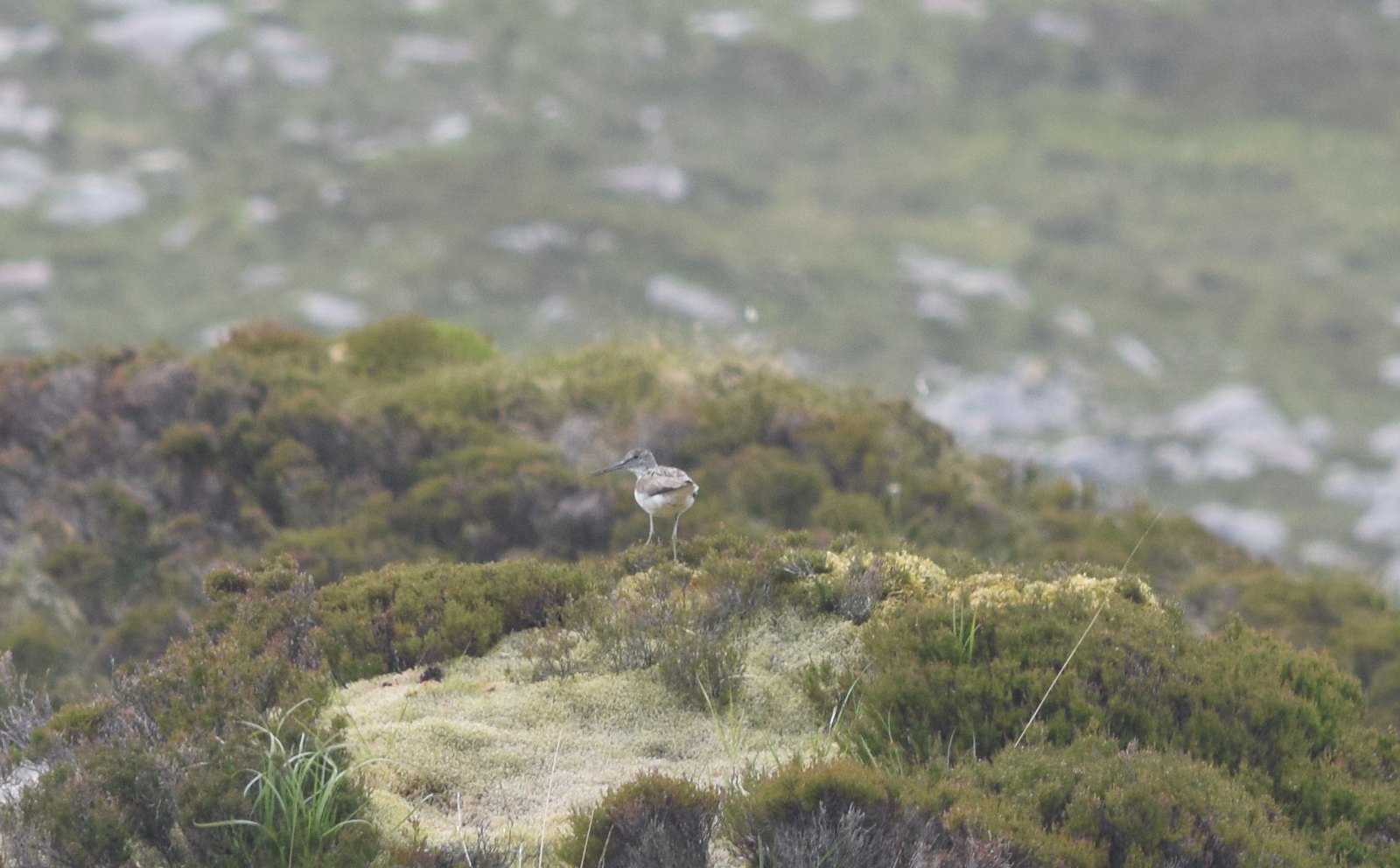 He'd just come down after a mad night bivouacked on Ganu Mor in high winds. Storm Hector had pretty much left the UK, but in this NW corner we'd had a night of winds and very strong gusts. He'd managed to find some shelter, but "It was hellish," he said; "I got one hour's sleep." He was due to give a camera course the next day at Loch Maree where the forecast was again pretty grim. (Maybe a day for some dramatic black and white skills...).

But it wasn't my scintillating company that was keeping him, nor the calls of the waders. He was waiting for his friend who eventually caught up, looking incredibly uncomfortable. Not surprising: that track is very rough and very long and he was on a road bike...! (Ow.) No rest for cyclist no.2 though - as soon as he'd caught up, they were off, no.2 wincing like a slug on broken glass, and I carried on til I was about due east of Cnoc a' Mhadaidh. That cloud seemed to be getting lower...

A pipit called out from its vantage point...

...and as I left the river bank to strike off up the hill, my eye fell on a series of peat dams, which must be helping all those nesting waders and their feeding chicks. 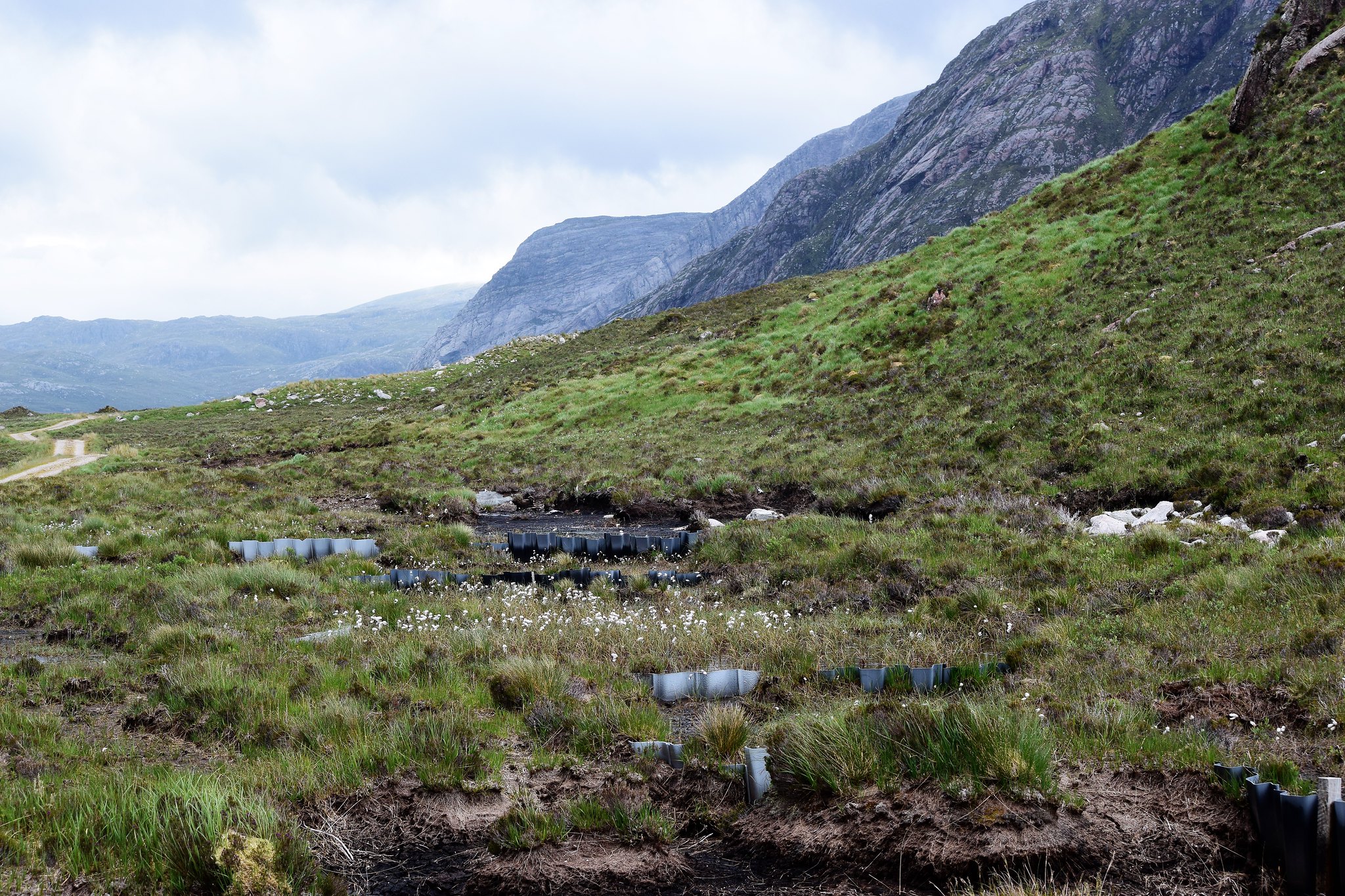 Peat grips to raise the water table I guess

The ground underfoot was delightful, long tussocky grass into Coire Duail, with heather and moss meant there was no sinking into bog today. Everything was ready for a feast of midges, but thwarted by the wind which was too strong for them to take to the air. Starved sundew, butterwort and dragonfly but happy me. 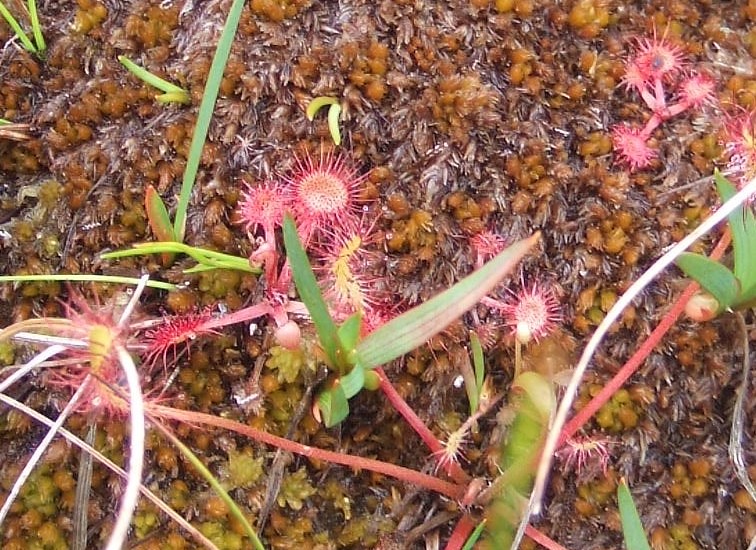 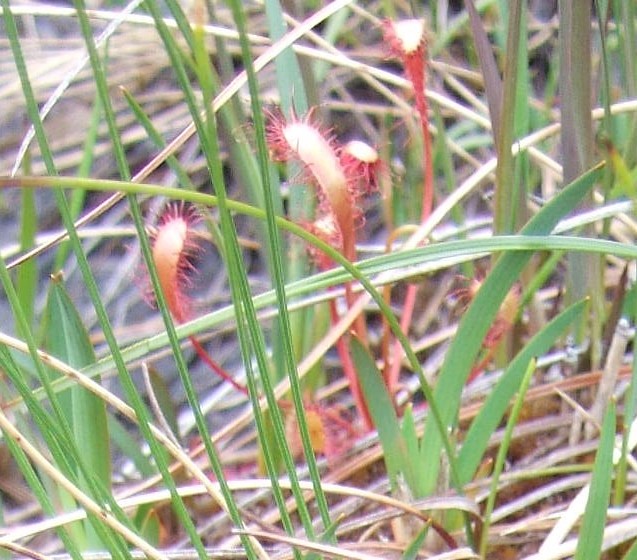 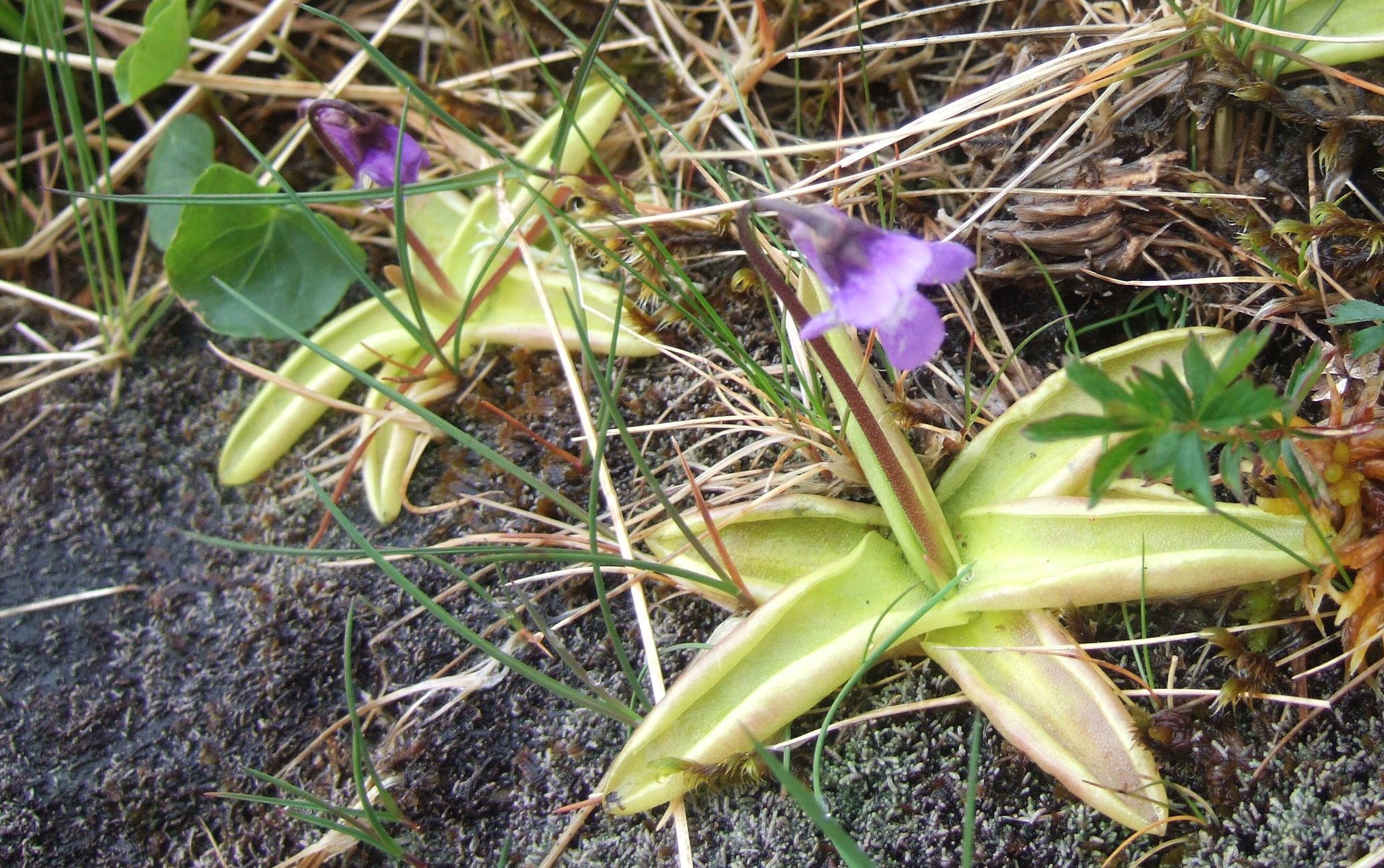 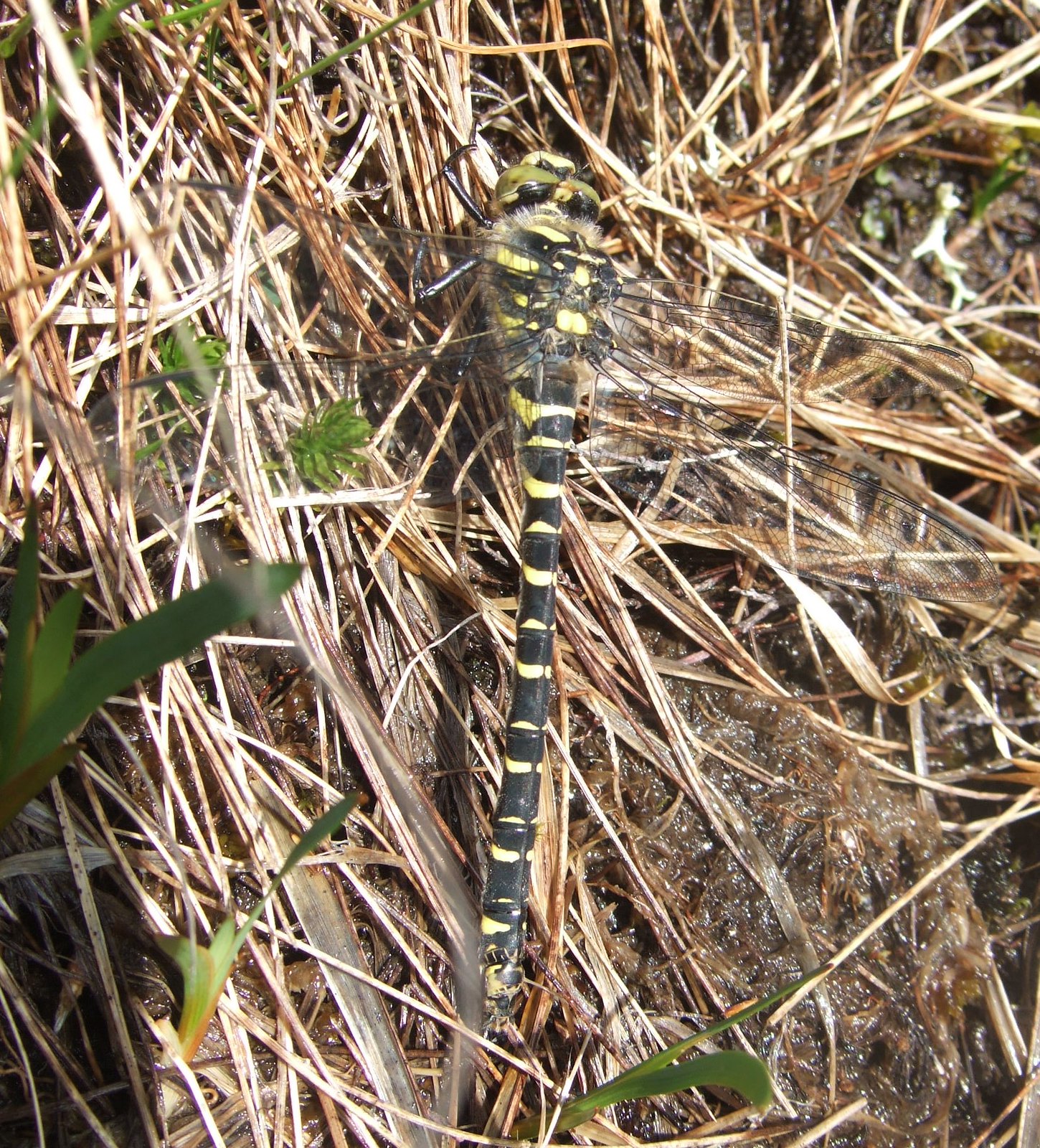 The noise of the burn was impressive as I rose, so, still hopeful of the cloud lifting, I stopped for a coffee and just enjoyed the loud crashing of the water. 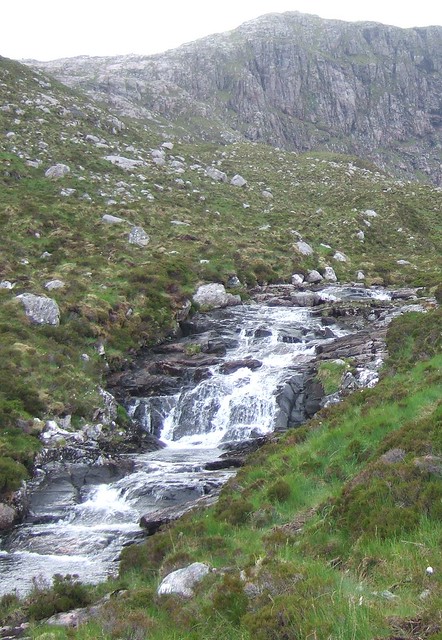 On the southeast flank of Cnoc a' Mhadaidh was a woolly looking deer, and its friends... 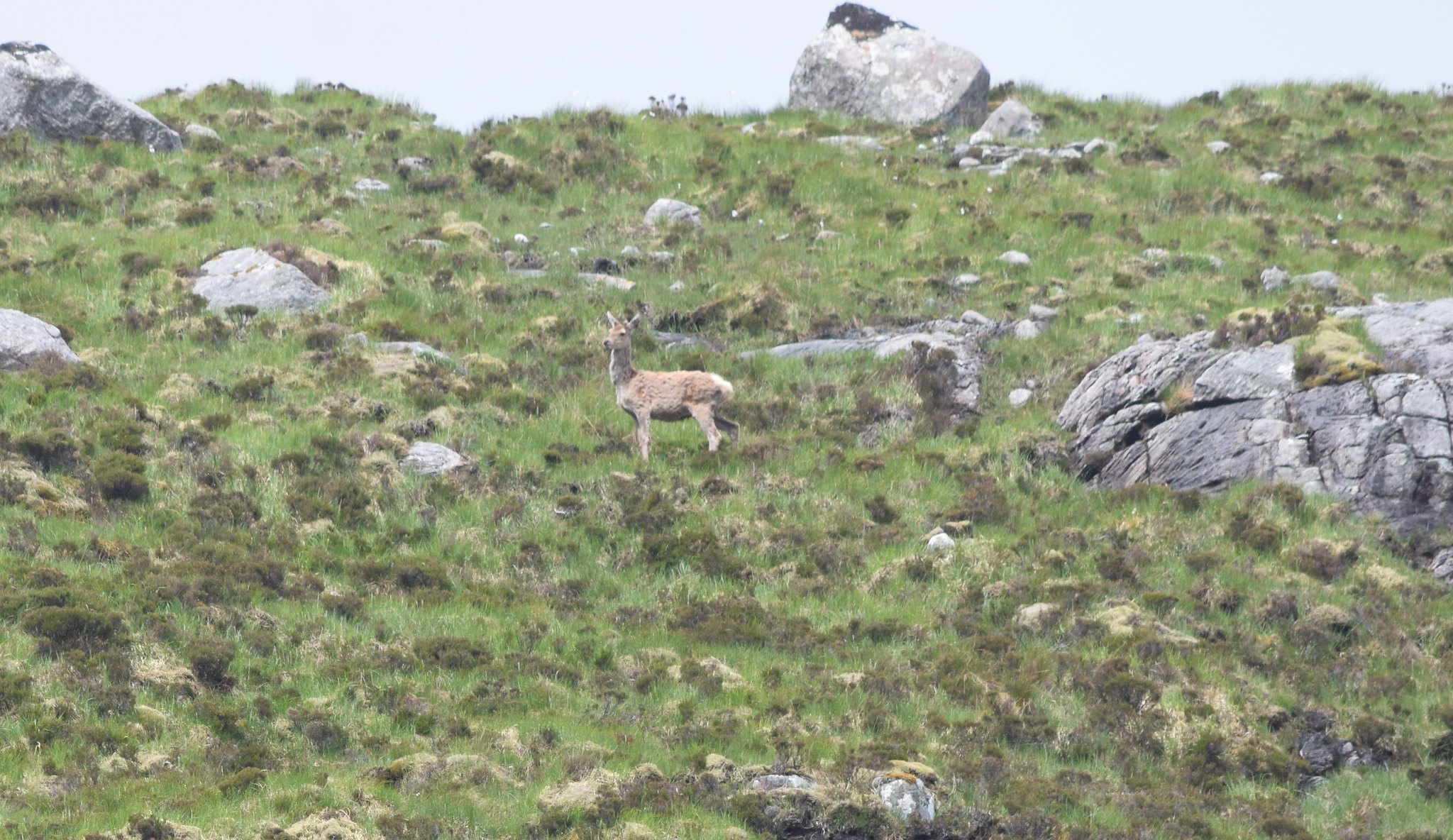 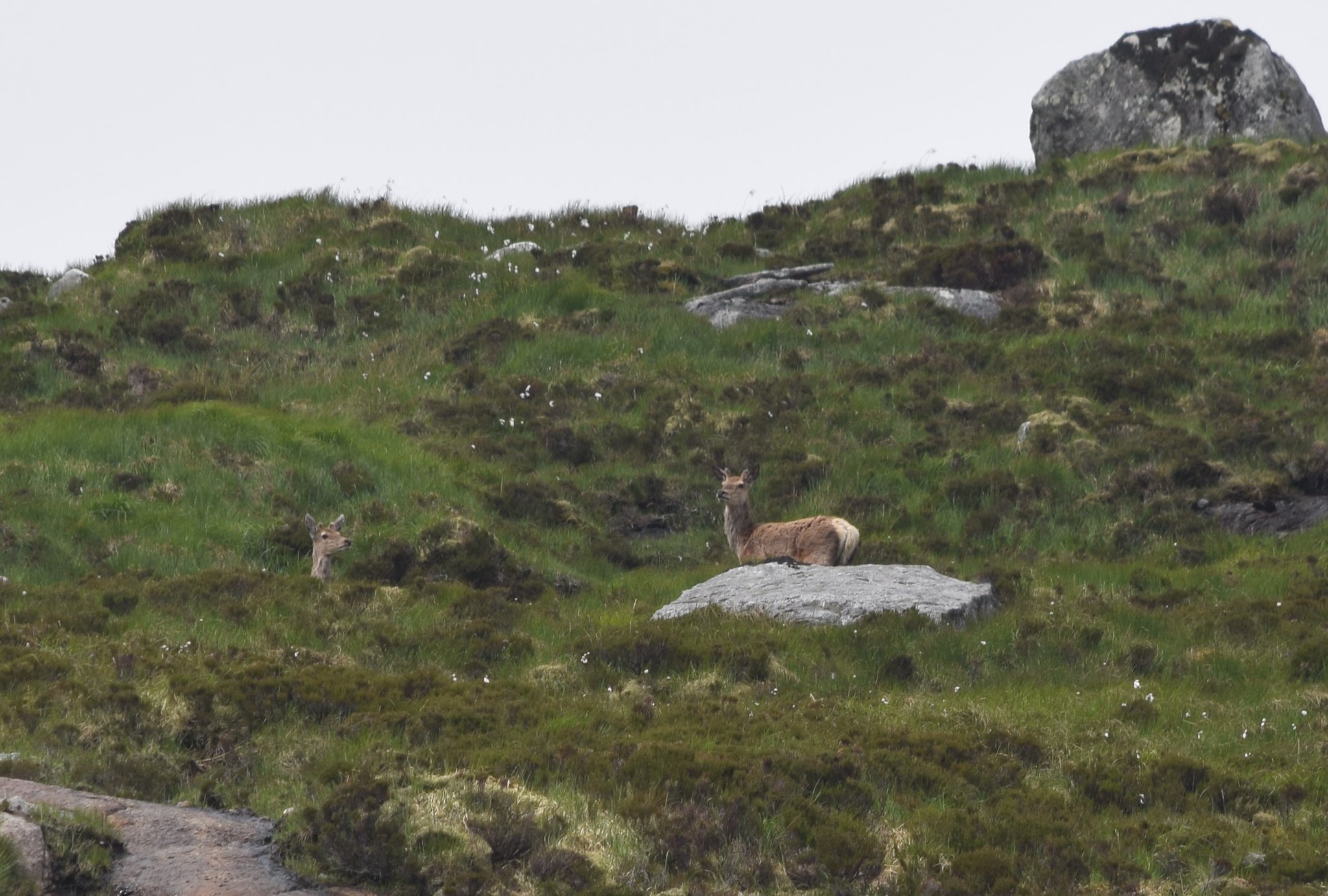 Listening deer below the clag

... and my hopes for a cloud-free top were struggling to stay up.

As I rose, the dramatic scree-flanked north wall of A' Cheir Ghorm dominated the view, but rather than the beautiful clarity of GariochTom's 2011 photo (6th in his report: https://www.walkhighlands.co.uk/Forum/viewtopic.php?f=9&t=13346), for me the cloud just kept on blowing in from the coast, and neither hill nor I were managing to shrug it off. 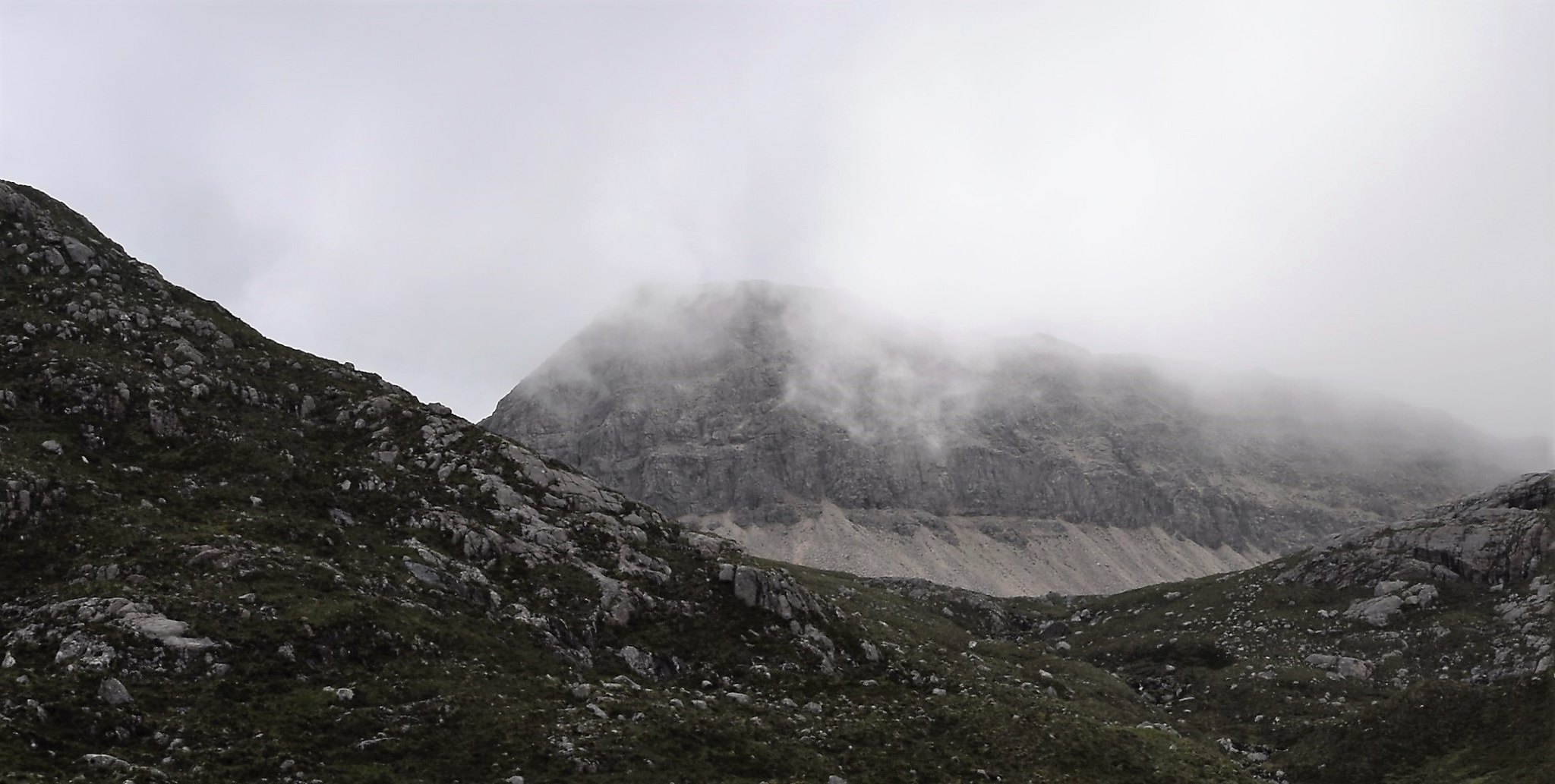 Cloud on A' Cheir Ghorm

Putting my faith in the forecast - cos you have to for morale - I told myself it was going to clear, and hey presto, by the time the whaleback curve of Ben Hope was due to come into view it was starting to look pretty good 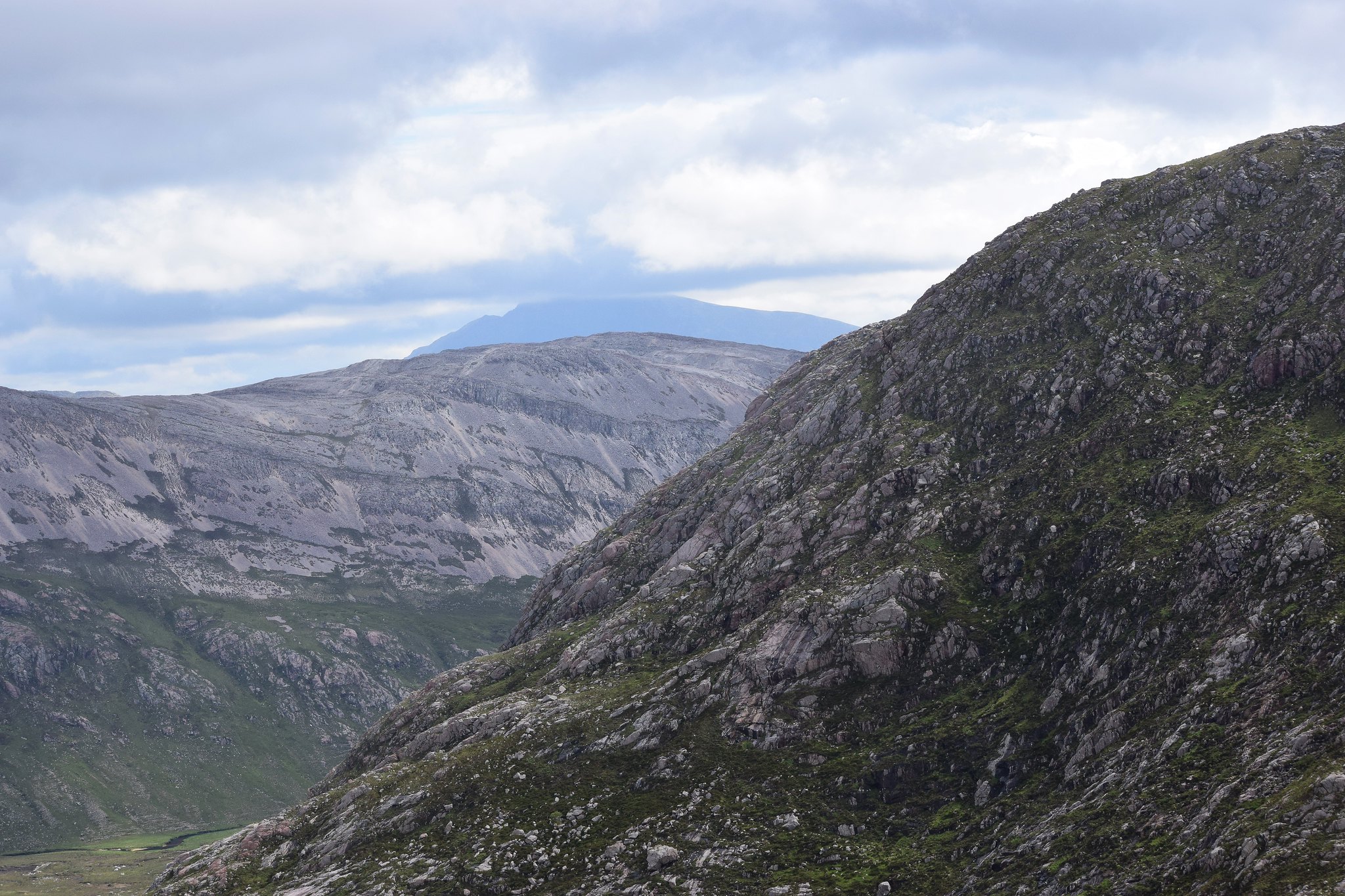 Up at the bealach, before the last steep stretch to the top, I had my first sea view. It's always a treat to rise out of a corrie when the sides fall away and you see what's on the other side. Here, the sides barely do fall away and it's quite a narrow gap between the Cnoc and the rise to Ceann Garbh. But this was lovely - looking down to Kinlochbervie and round to Sandwood Bay, The island sticking out, left of centre is the rocky, undisturbed Eilean an Ròin Mòr. 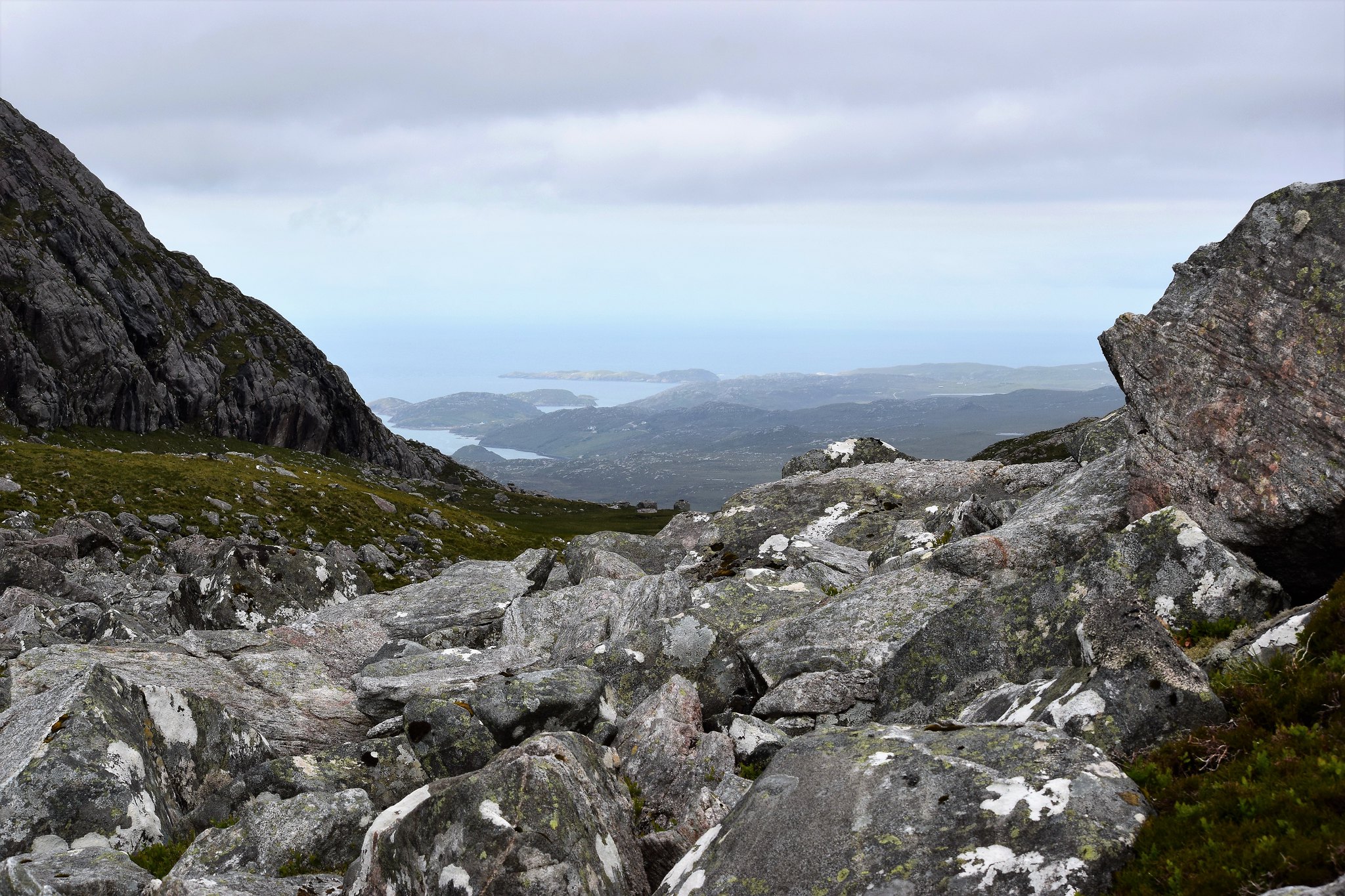 View WNW to Kinlochbervie and beyond

The cloud was still hugging the tops above me, but I carried on up into the clag. It wasn't looking good. C'mon, c'mon. Shift, cloud. Pleeeeease... 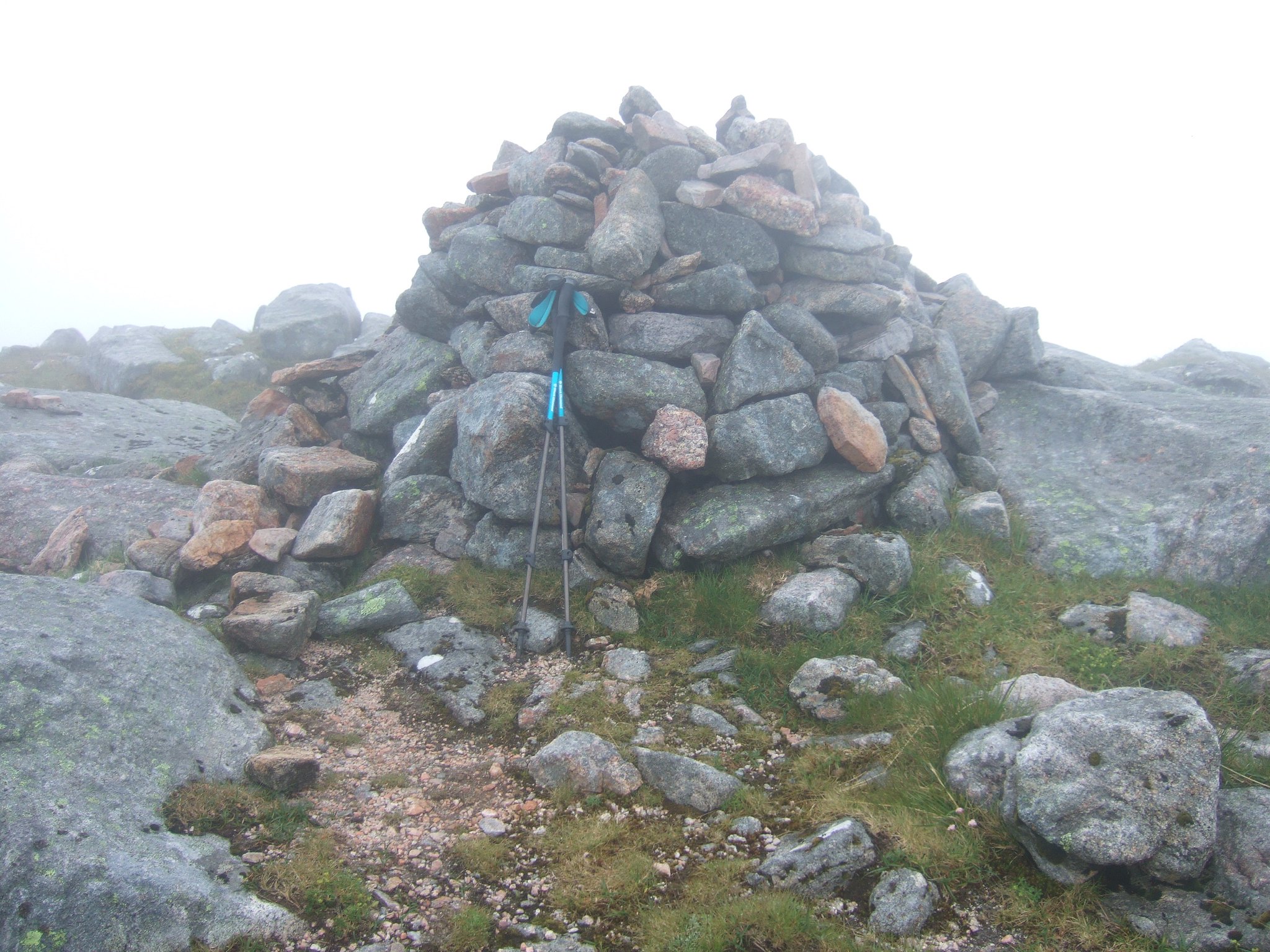 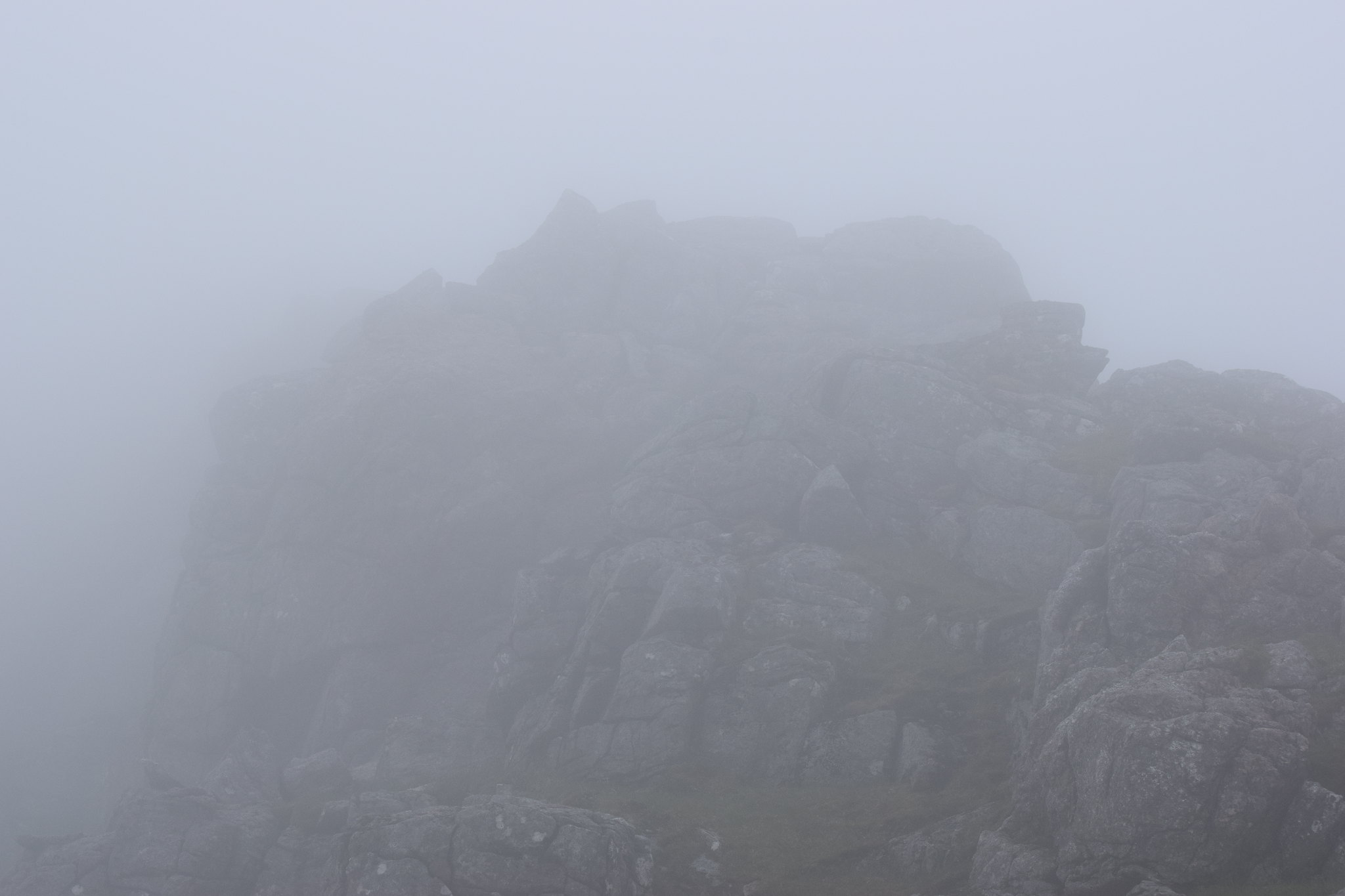 I'd been looking forward so much to the ridge and the view to Lord Reay's seat from the top of Foinaven. Clinging desparately to the forecast I hung about at Ceann Garbh, waiting for the clag to lift. It was getting colder, the wind was starting back up. In my head were the WH notes of the delights awaiting me from Ganu Mor cairns: "the second, more southerly cairn has the finest view"

As I set off like a crazed optimist for Foinaven's summit proper, a mere 9m higher than I was, the wind suddenly hit me. Thwarted by all the signs that this weather just wasn't going to improve, head down battling against the wind, above a steep drop into Glas-Choire Grànda, I thought, "what am I doing?". After a bit of bad-tempered indecision, I decided I wasn't going to gain anything by 'summiting' proper, perhaps it was even a bit foolhardy to continue in the wind (I'm quite light and get thrown off my feet in big gusts!), and that I'd be back in this favourite corner of mine anyway before too long. So, reluctantly I decided I might as well call it a day and return another time in better visibility.

Back I went, buffeted about by the wind, to the Ceann Garbh cairn. That was totally pointless, from the point of view of descending, except it meant I'd be absolutely sure of my whereabouts since I was navigating in thick cloud.

The descent was pretty bouldery. Although it's not particularly steep, when all you can see is your feet it's quite deceptive. The clamber down in the clag went on and on, when suddenly, I raised my head from my feet and what did I see laid in front of me but John Martin's 'Plains of Heaven'! From Solid Air John Martin to master-painter John Martin, in one second! 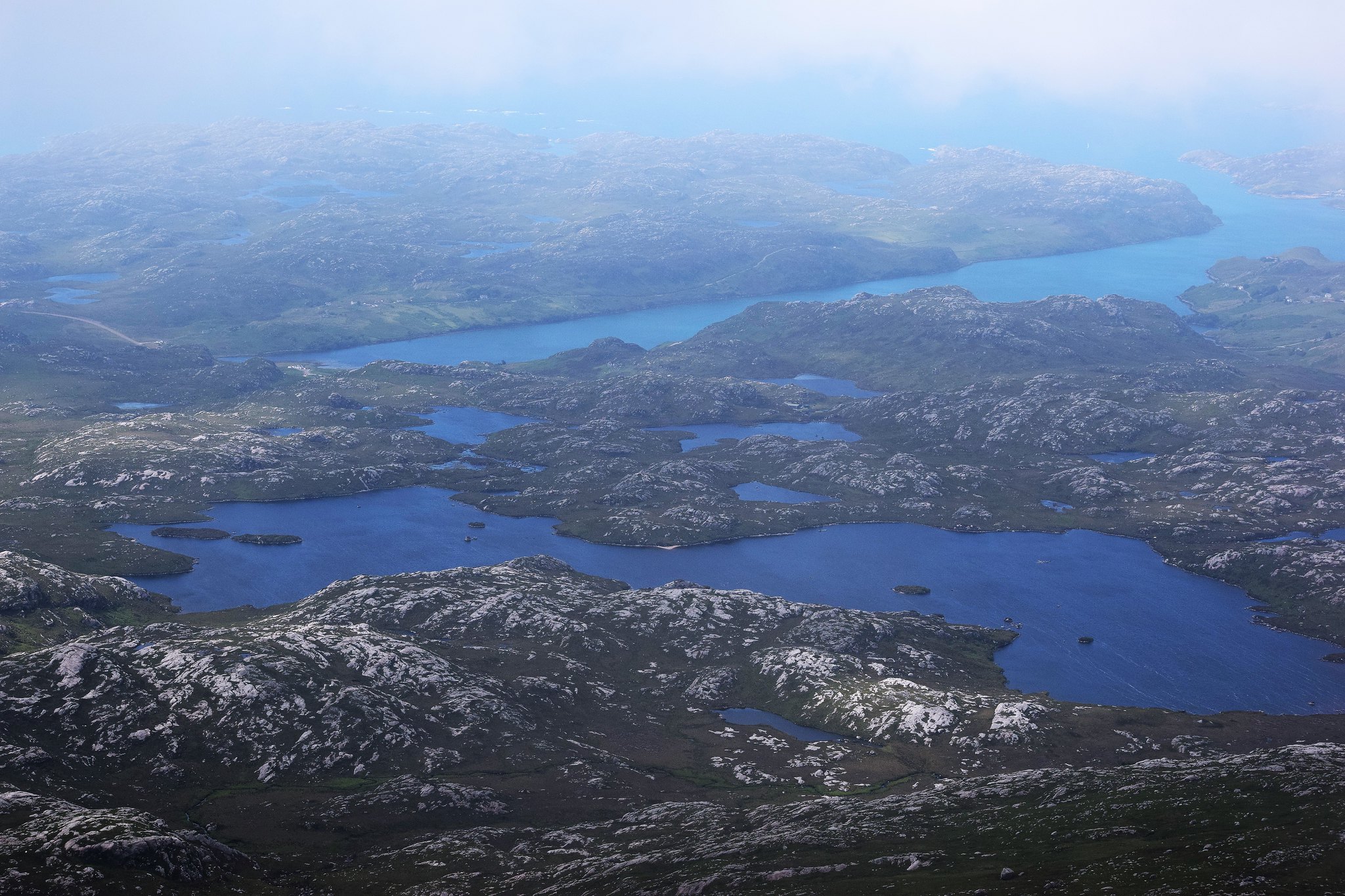 Knock and lochan or Plains of Heaven

Ok, maybe it's not an exact likeness

. But it made me gasp and sit on a rock to take it in for a bit. Part of it was that fantastic sensation of having your sight restored. It probably releases endorphins or something - I don't know anything about that stuff, but coming out of the clag into a view always gives me a kind of opiate-style rush, and I know I'm not alone in that.

The A838 snaking off southwest

To my left I had an oblique view of Ben Stack and Arkle, though the wind and angle meant I couldn't take decent photos - sorry about that.

After all that grey - the cloud, not the quartz - the bright, bright sapphire and lush landscape laid out before me, stretching out to Sandwood Bay, were blowing my mind. It is a "long boggy trudge back to Gualin House" as the WH route says, but it was so beautiful I actually really enjoyed it.

To Eilean an Ròin Mòr

Always good to see so much bogbean too.

Bogbean. Much favoured by dragonflies - now all they need is some midges...

As I headed back towards to the car, I looked back up at Foinaven, and was pleased to see its head was still in cloud. 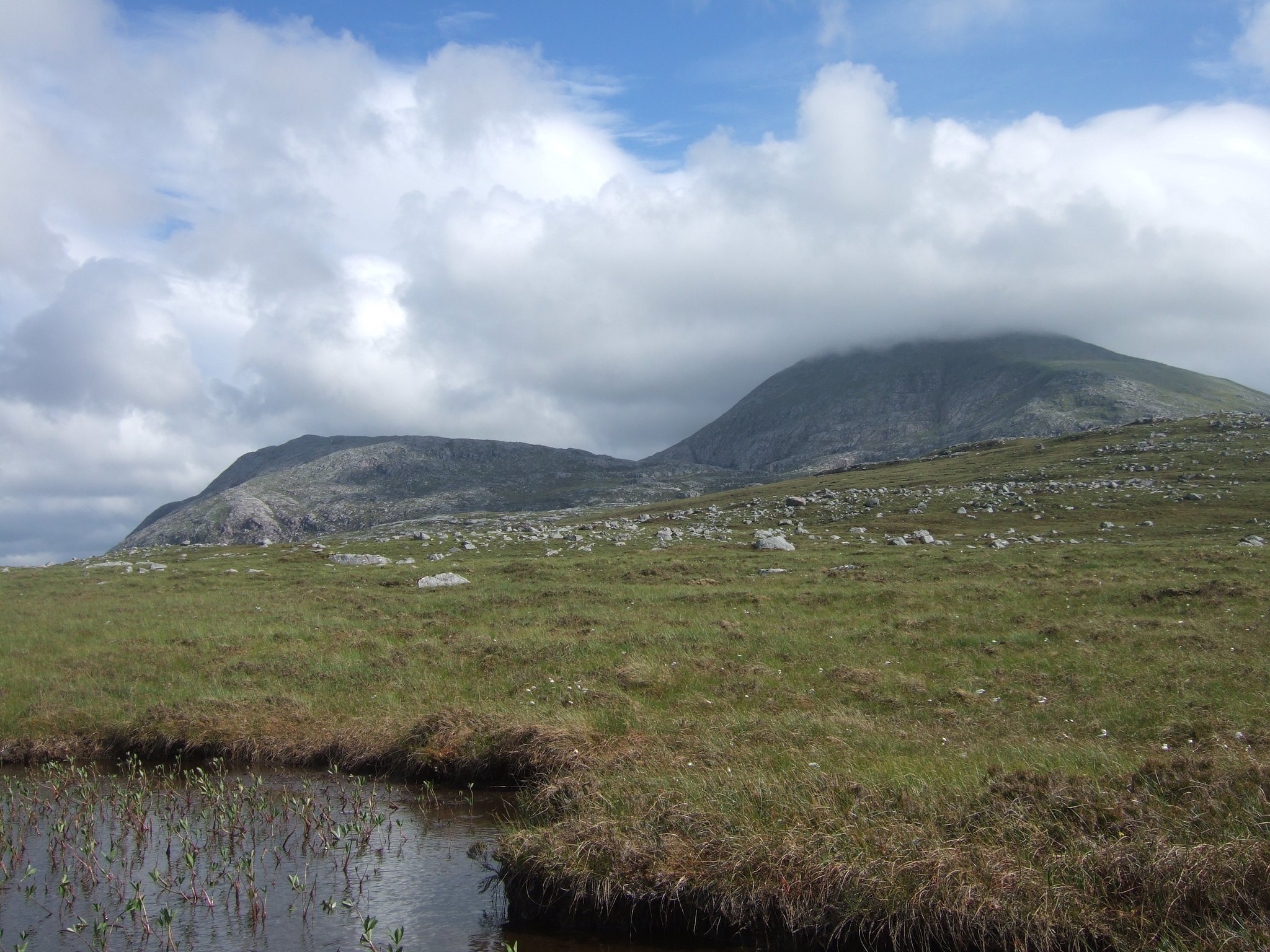 Had it been beautifully clear I'd have been torn between rushing straight back up there (pff, like I can rush uphill...) and having a petulant strop in the bog...

All in all though, another day of so many joys - starting with snipe - and a very good reason to come back for the ridge some other time.

Re: Foinaven - from clag to splendour

And you'll struggle up there again, just because you didn't get the views?

Wow, you're a better person than me (or have more years left). We did get the views, but only for a minute or so, and they were offset by the jets tearing the sky in half, a horrible reminder of "real" life. Lovely photos of sundew and birds.