This was my first solo bivvying trip, and nothing quite went according to plan but it ended up being hugely enjoyable. Undeterred by an ominous weather forecast I caught the train from London to Glasgow and thence to Ardrossan, arriving just in time for the last ferry, with the plan of catching a bus from Brodick to Sannox and bivvying somewhere near there, then doing the Sannox Horseshoe in the morning. It was not to be. I walked up the path from Sannox as night was falling and bivvied in Coire na ciche. It was a beautiful and calm evening, but halfway through the night a fierce wind started howling directly into the corrie. I will not pretend to have slept soundly, though it was actually nicer than being in a tent in similarly windy conditions - much less rattling and no fear of being blown away into the distance.

I was wide awake just before sunrise, the blue hour, and it was as if I had woken up in a Turner painting. The sky swirled angrily with billowing blue-grey clouds, reflected dully in the Firth of Clyde, all seemingly rendered in broad, furious brushstrokes, punctuated only by the lights of Ardrossan and West Kilbride shining brightly out of the dark nebulous shape of the mainland. I was well-wrapped-up but my clothes were no match for the freezing wind - time to get moving.

The Firth of Clyde from my bivvy spot 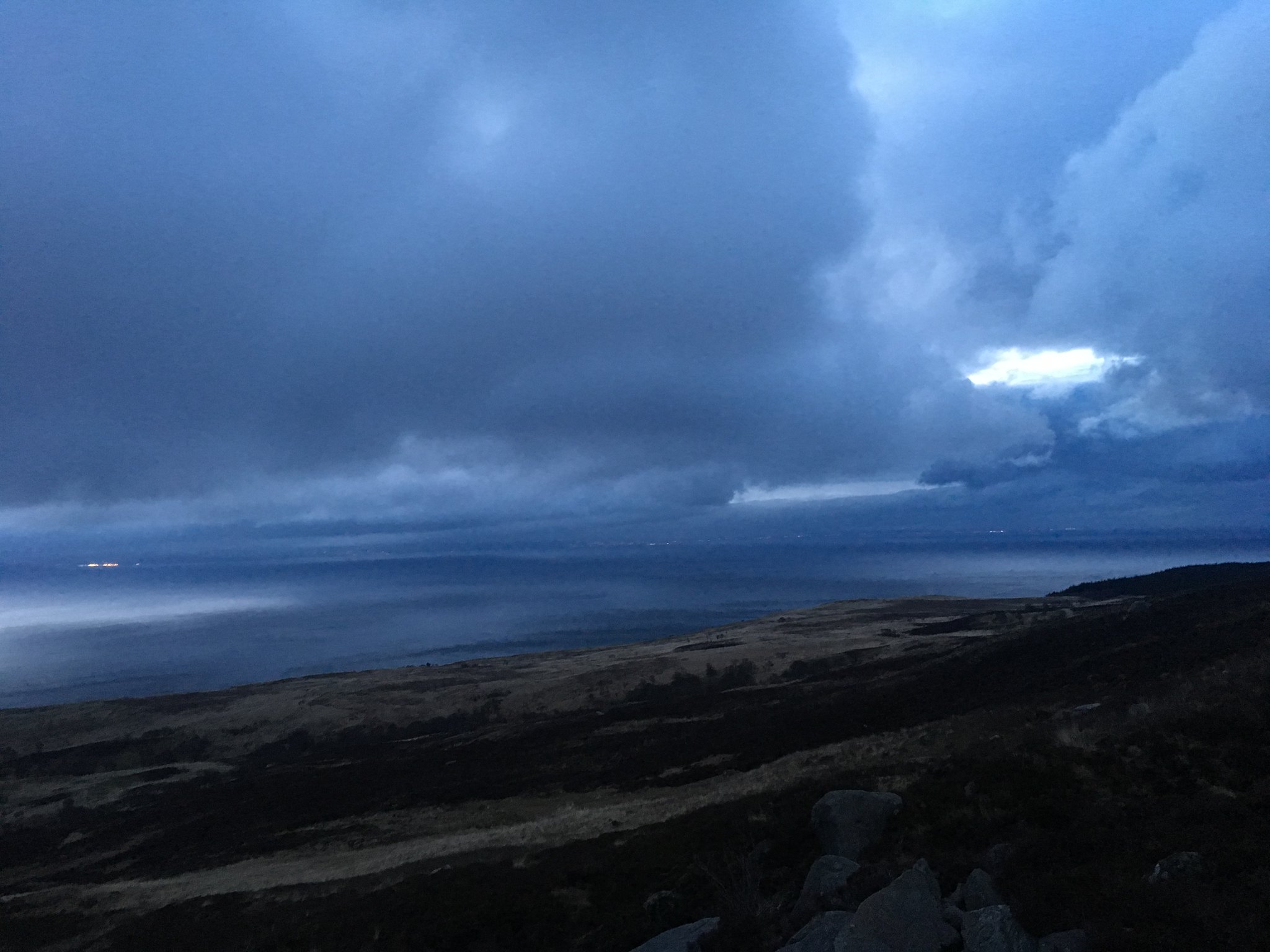 First disaster of the day: it was far too windy to use my stove (a Primus, whose paltry windcheater-thing didn't stand a chance), so, after a few failed attempts in places that seemed to promise a bit of shelter from the tempest, I resigned to the reality that there was no possibility of coffee. Onwards and upwards.

I climbed up, trying to gain the ridge via 'an awkward intitial scramble up slabs' which, according to the WH guide, starts directly north of the summit of the very unbreastlike Cioch na h-Oighe (maiden's breast for those unfamiliar with Gaelic). I went far too far around, had a little panic and retraced my steps until the slabs became obvious, and duly scrambled up. By the time I was at the summit of Cioch na h-Oighe the wind was so strong that I was blown off my feet several times, and then it started to rain heavily and horizontally. I didn't much fancy a narrow ridge scramble on my own in these conditions, so I decided to save this route for a nicer day, and headed back down, retracing my steps all the way to Sannox. Back closer to sea level it was much calmer, with only the occasional big gust of wind to hint at the violence of the weather higher up.

This relative calm didn't last long, however: as I was waiting for a bus in Sannox the heavens opened and I was drenched in seconds. Back in Brodick I took refuge in a pub and looked gloomily out of the window as the mountain range disappeared completely behind a curtain of rain and cloud.

Rainbow in Glen Sannox from just below Cioch na h-Oighe 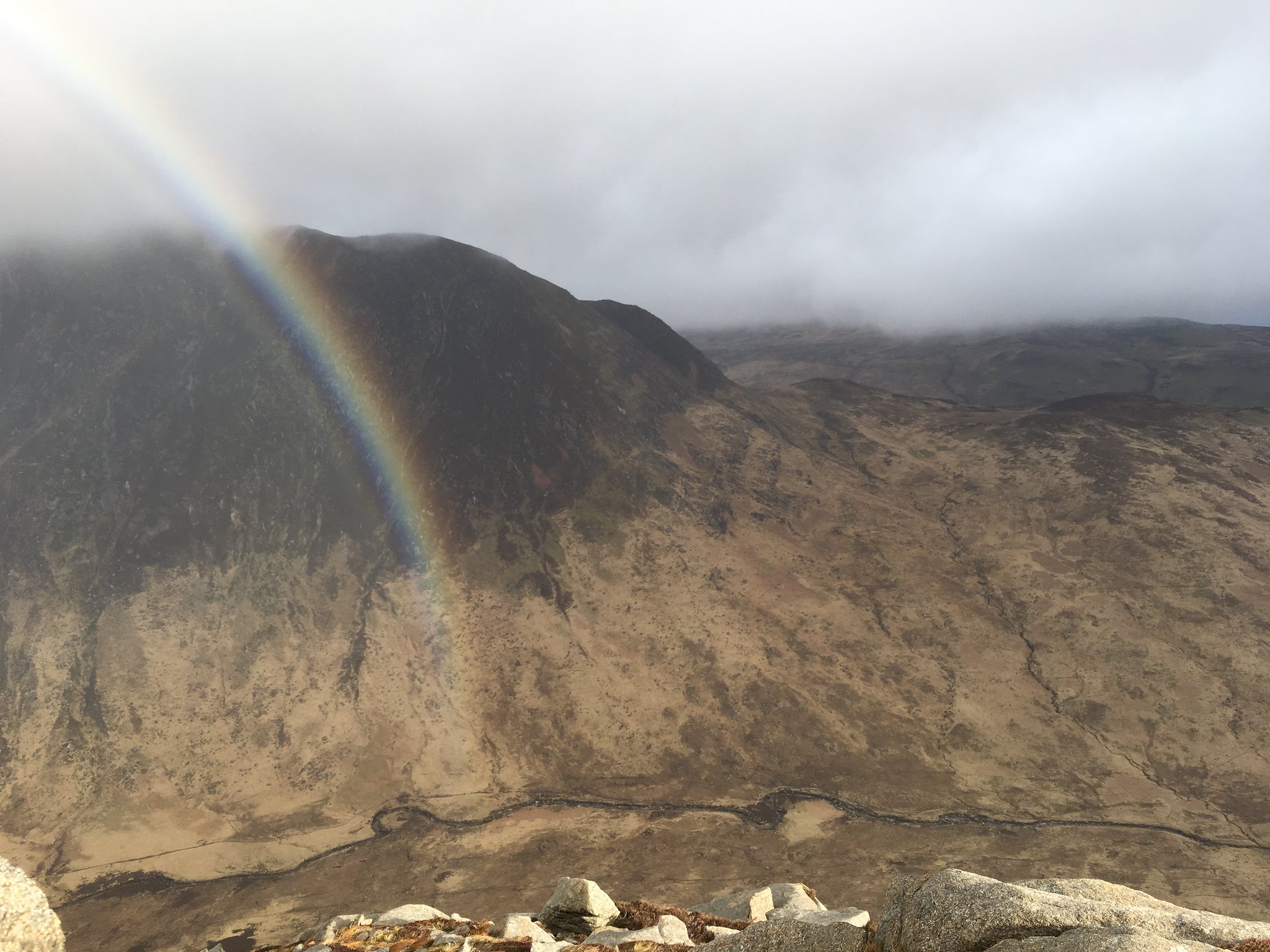 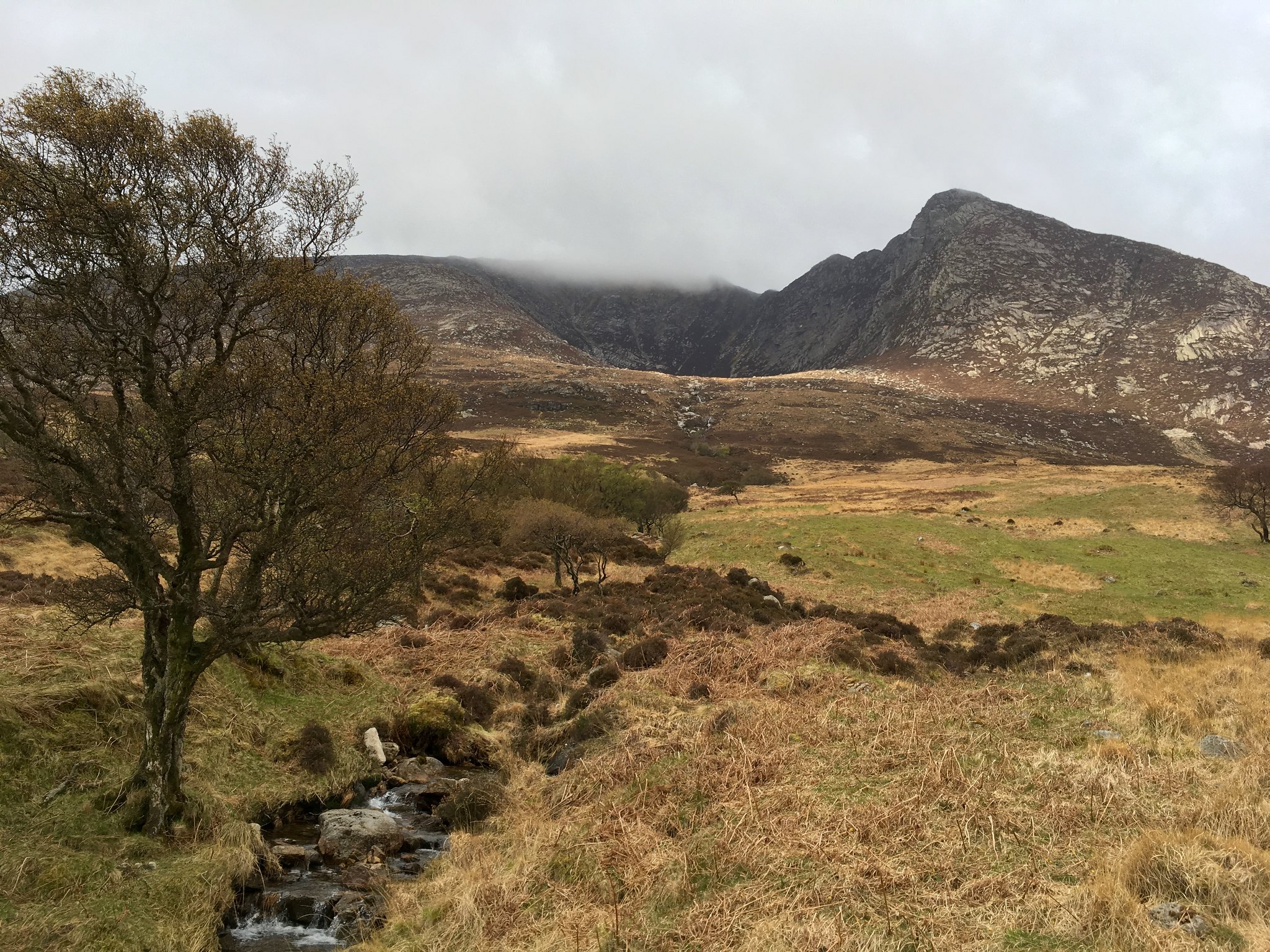 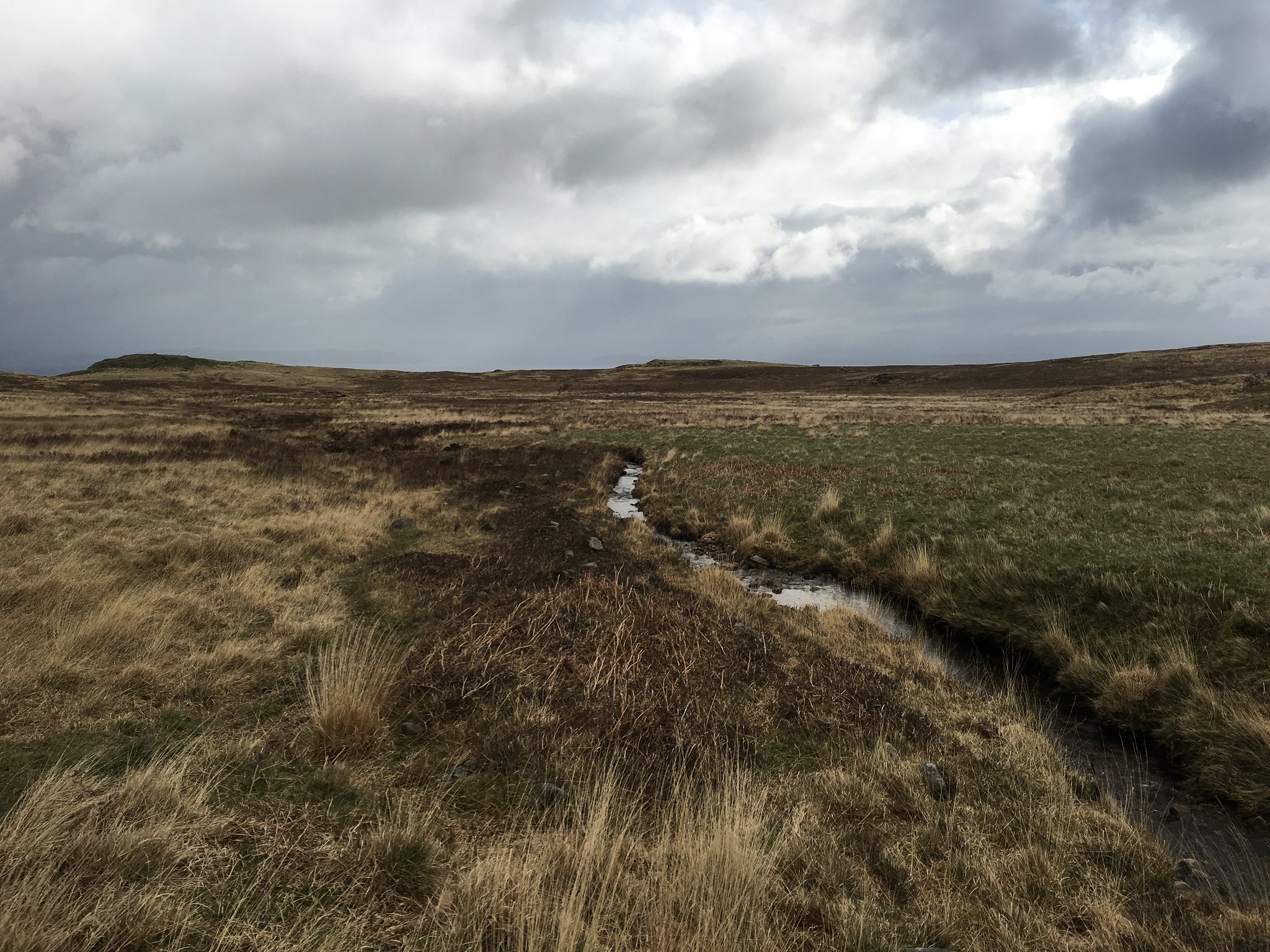 The storm had cleared by about 3pm, I seem to remember, and the sun came out, the mountains unveiled again. It may have been late in the day but I didn't want to concede total defeat; I decided upon the shorter route of Goatfell from Corrie, via the north ridge. So I got a bus - the Arran buses are really good, cheap and frequent, especially by the standards of Scottish islands - to Corrie, and set off. It proved a very straightforward walk in these conditions, and I'm afraid I don't remember much from this stage aside from meeting a very big and friendly dog (and presumably its owners, who sadly didn't make such an impression).

Once on the ridge I took a little detour to North Goatfell, where I was treated to a grand view of the walk I might have had that day: the ridge ahead plummeting down to the Saddle before climbing dramatically to the mini-Matterhorn of Cir Mhòr, and then to the grand bulk of Caisteal Abhail, whose east ridge forms the almost-vertical northern wall of Glen Sannox, breached by the great gash of the Ceum na Caillich, the Witch's Step. Sadly I had left my camera at home in the interests of packing light, so my photos do not do it justice.

After savouring the view I turned southwards and followed the crest of Goatfell's north ridge, with some enjoyable scrambling over several big tors. I love the granite on Arran: it has so much friction that I felt I could almost walk up near-vertical slabs. With more sustained scrambling or climbing, though, I imagine it wouldn't be kind to the hands. The weather came in again just as I arrived at the summit of Goatfell, robbing me of views, but no matter. I descended via the tourist path, which, since it was late in the day, I had all to myself. I remember some amazingly weird lenticular clouds appearing over Holy Island as the sun was setting, which I tried to photograph - they looked like inverted versions of the tors I had been scrambling on earlier.

That evening I had a bunk booked in the Brodick youth hostel, as I had been planning on getting an early ferry to Ardrossan the next day having done the Sannox horseshoe; but now, since I had only done a bit of walking and since the weather forecast for the next day looked promising, I decided I'd get another walk in and catch the latest ferry possible; I was catching the sleeper back to London that evening so as long as I was back at Glasgow Central before it was due to leave, I figured it would be worth it. 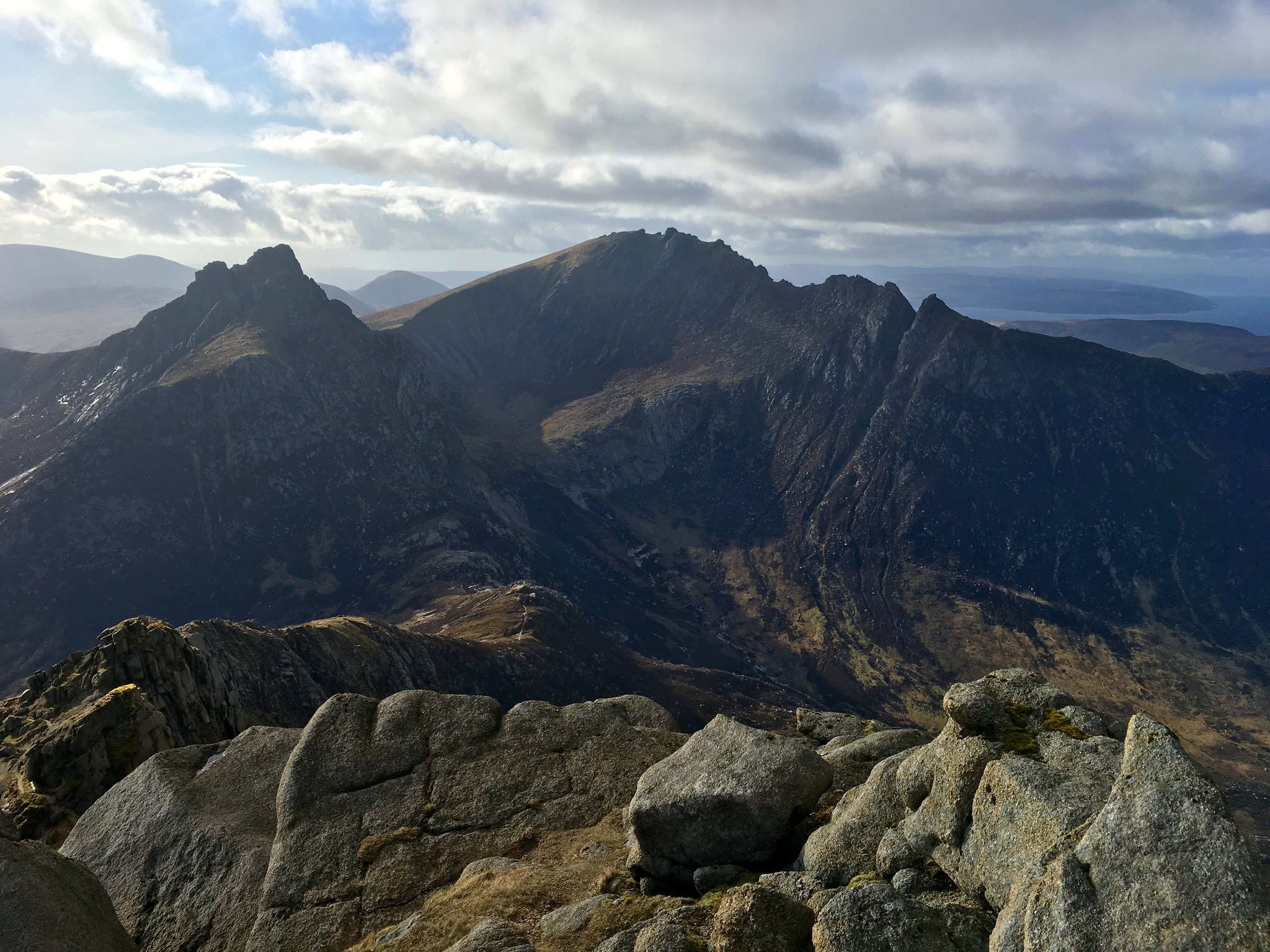 The north ridge of Goatfell 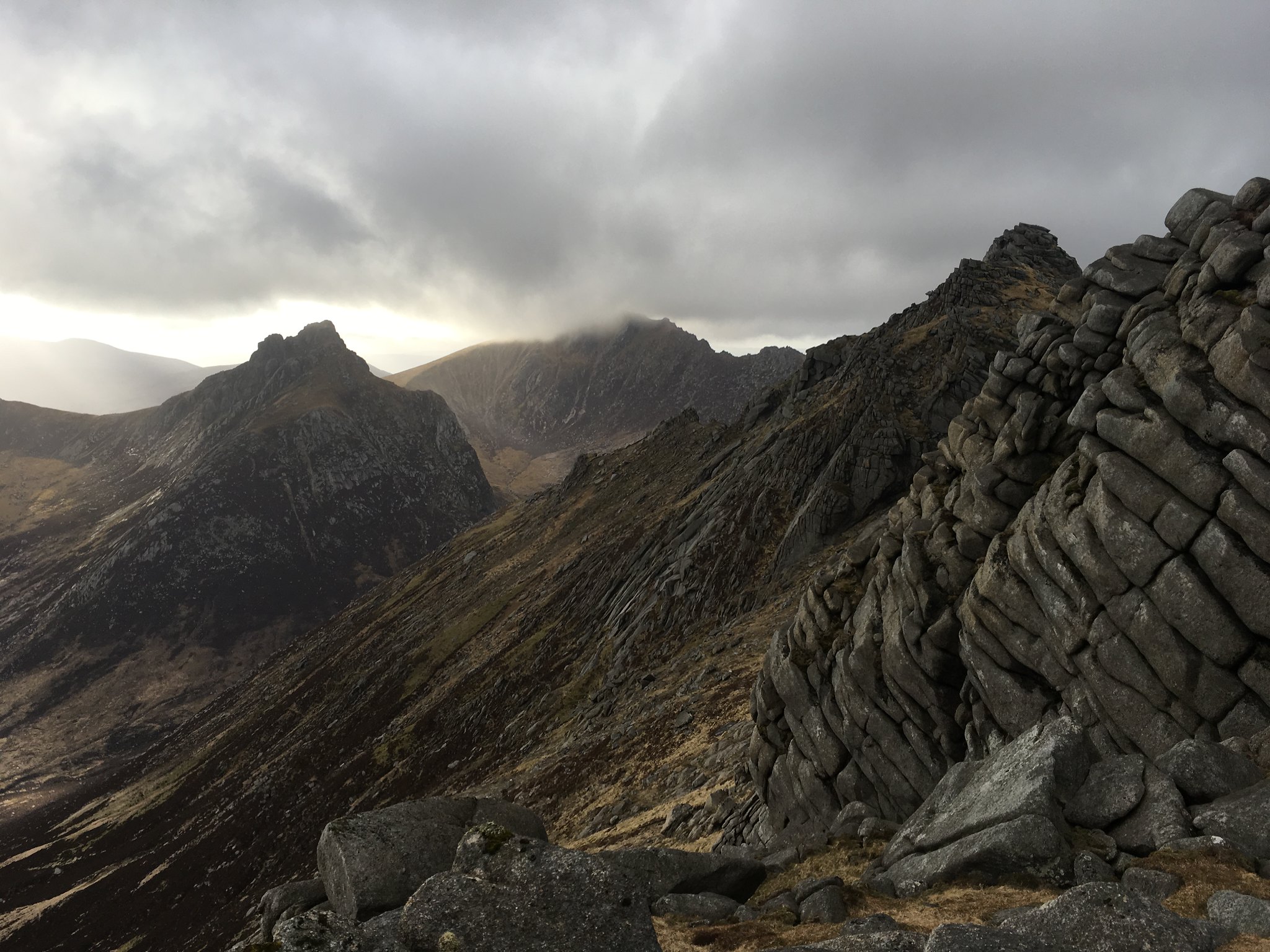 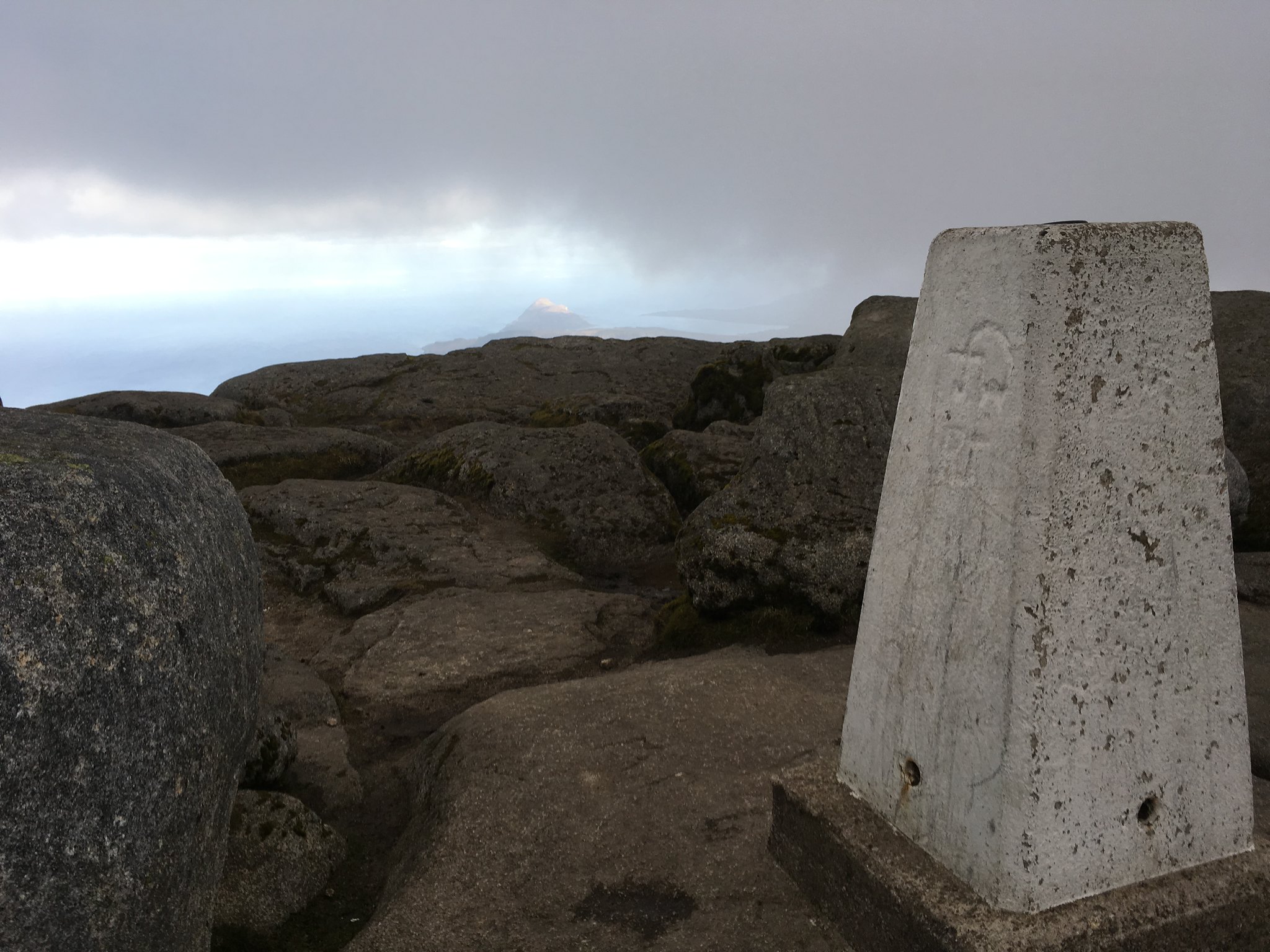 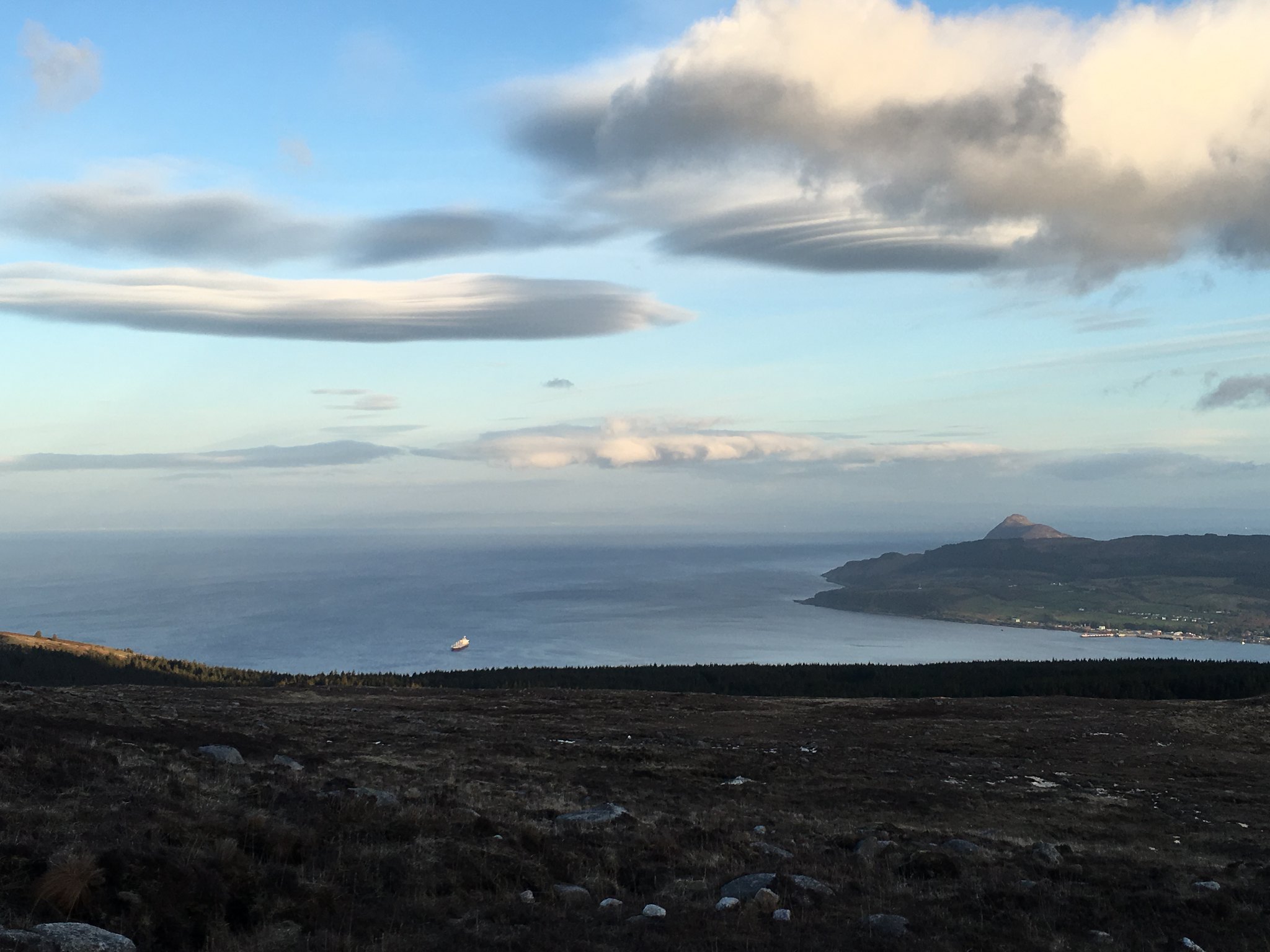 The next day I woke later than I should have done, and caught the bus up to Sannox again; I decided to climb Caisteal Abhail and add in Cir Mhòr if I had time. The weather was fantastic: sunny but not hot, windy enough to be refreshing but not an impediment.

I followed the WH route from North Glen Sannox, which proved very straightforward, and I was at the summit of the first Corbett quicker than expected. I was struck by the awesome size of the tors, and the view to Cir Mhòr, as well as the whole ridge from Cioch na h-Oighe to Goatfell, was stupendous; Beinn Tarsuinn and the A'Chir ridge were also very impressive. I shall have to come back another time for that when I'm a more competent climber (or can bring a competent climber friend). It was a clear day and I could see all the way to Ben Cruachan and the Paps of Jura.

Nonetheless I had no time to spare, so I went down the ridge on to Cir Mhòr, which is really beautiful from the bealach. It's also a very fine viewpoint, though the summit is surprisingly spacious - from every angle it looks like a tiny sharp peak but when you're on it it never feels exposed. From here I was struck by the contrast between Glen Sannox, gouged deeply by the glacier almost down to sea level, and Glen Rosa, a much shallower and gentler trench, leading slowly downwards back to Brodick. This latter glen was where I descended, and by now I was getting conscious of the time - I hoped to catch the one before 5pm to ensure being in Glasgow on time for my train.

Descending into Glen Rosa I couldn't take my eyes off the Rosa Pinnacle - what a grand sight that is from up close! If only I had been able to take a good photo. Further down in the glen I had the luck of befriending a group of students about my age who had been climbing on the A'Chir ridge, and as luck would have it they were aiming for the same ferry, so they gave me a lift back to Brodick as soon as we reached the road. Back in plenty of time for the ferry after all. So, despite nothing quite going according to plan it was an immensely worthwhile trip, and the first solo bivying trip of many - a very good way to get away from London. Sleeper train, as ever, was hell on earth, and I slept not a wink. 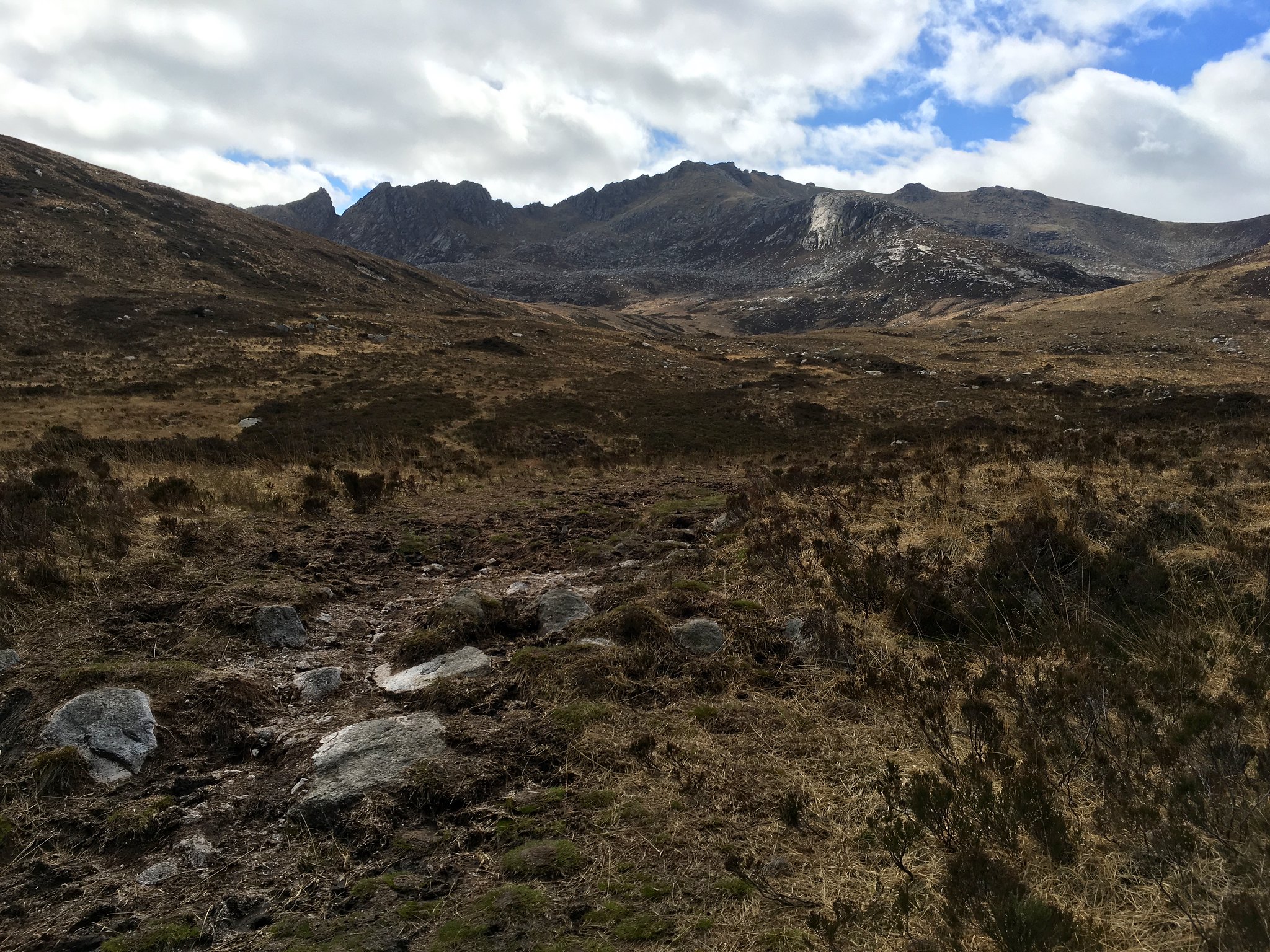 One of the tors with some handy people for scale 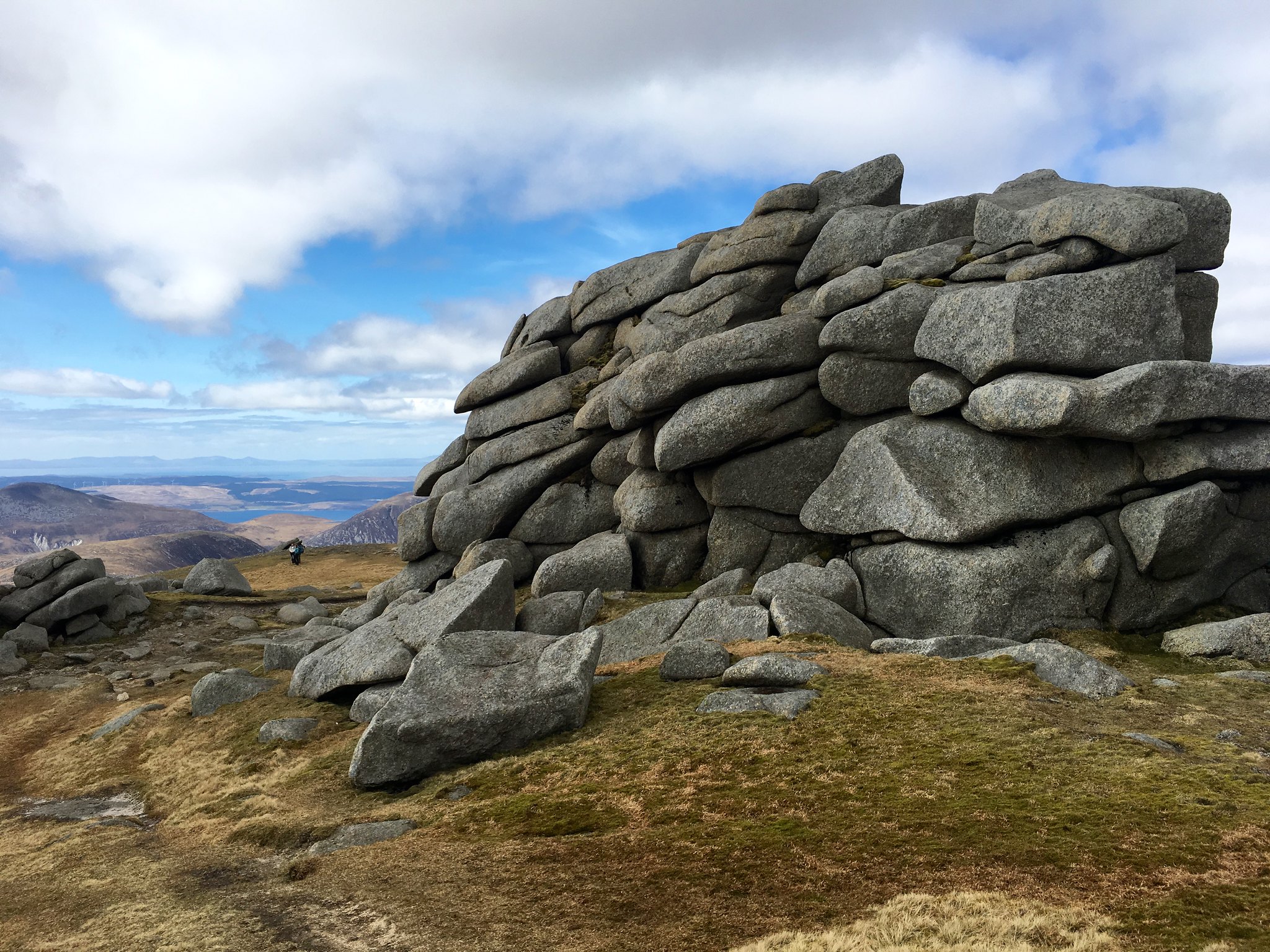 The summit tor of Caisteal Abhail 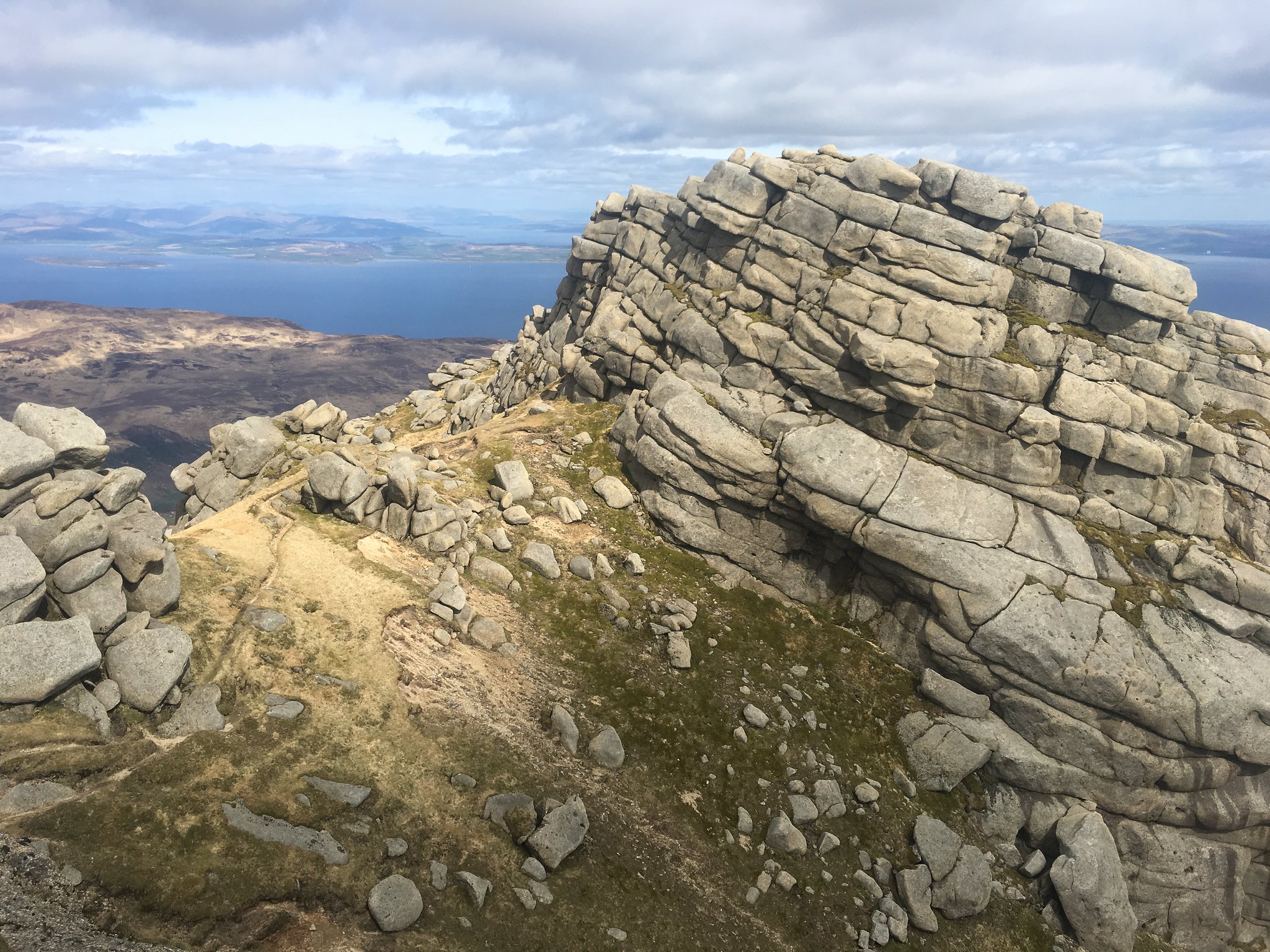 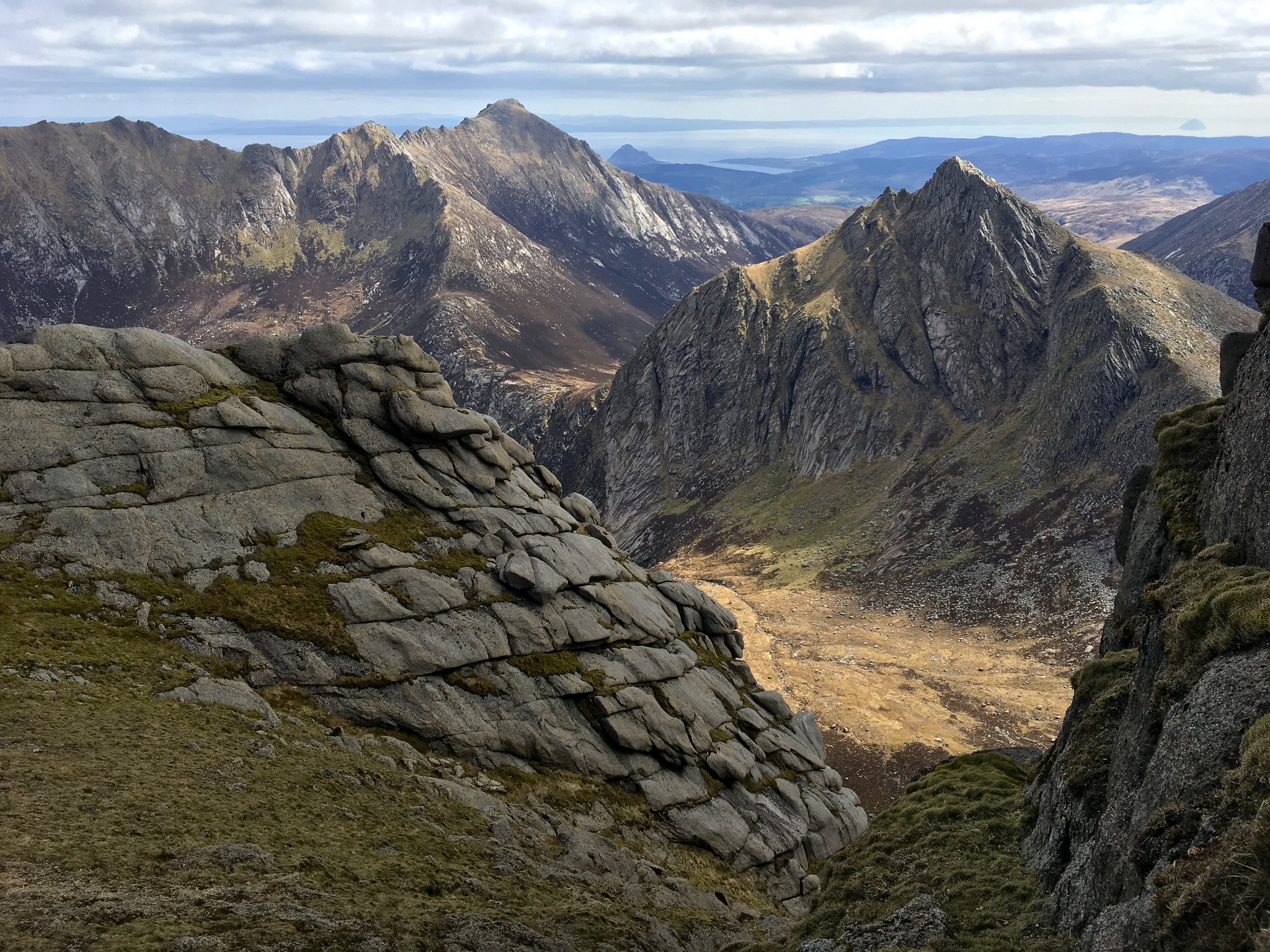 Cir Mhòr; spot the people in the midground for scale 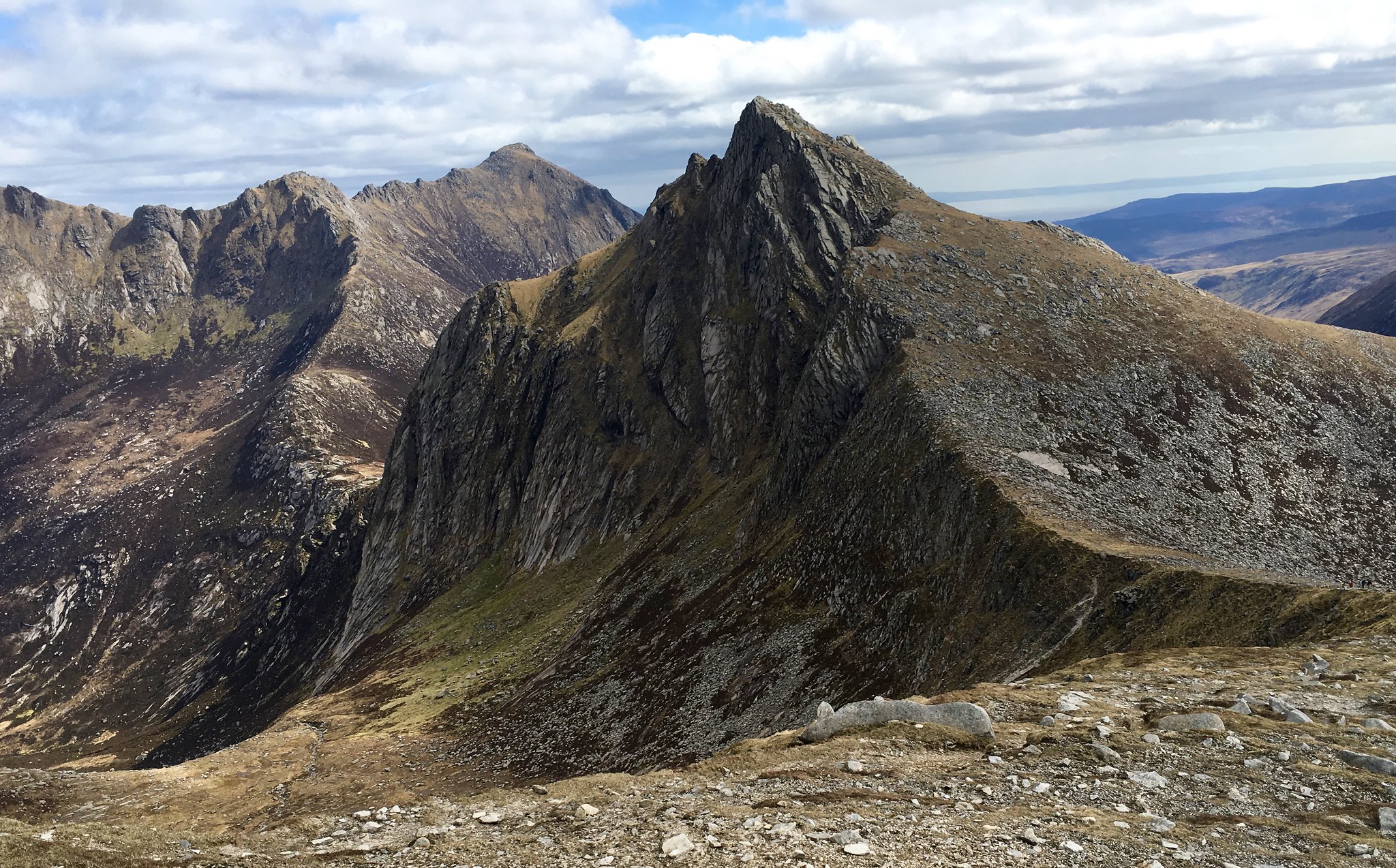 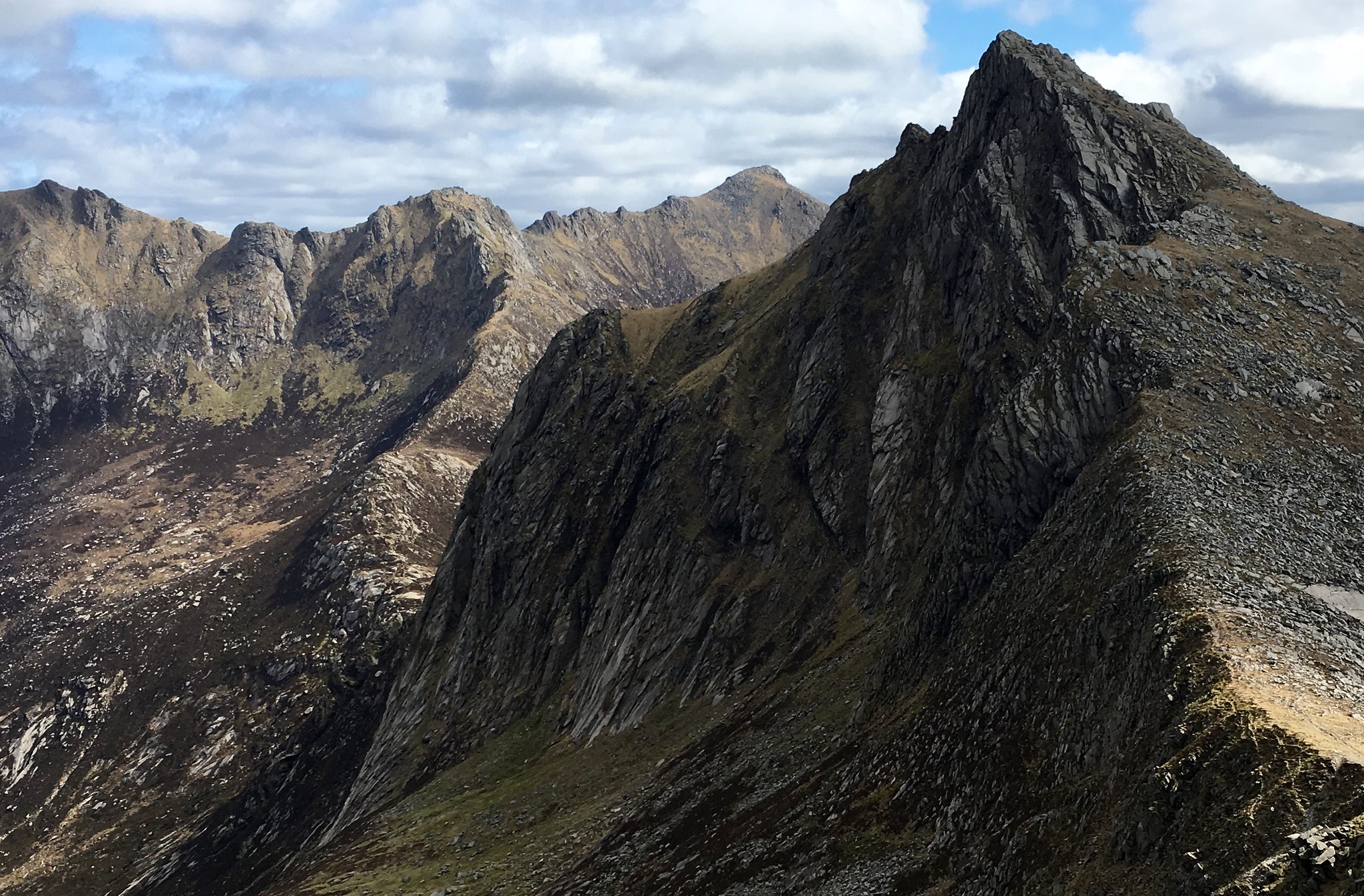 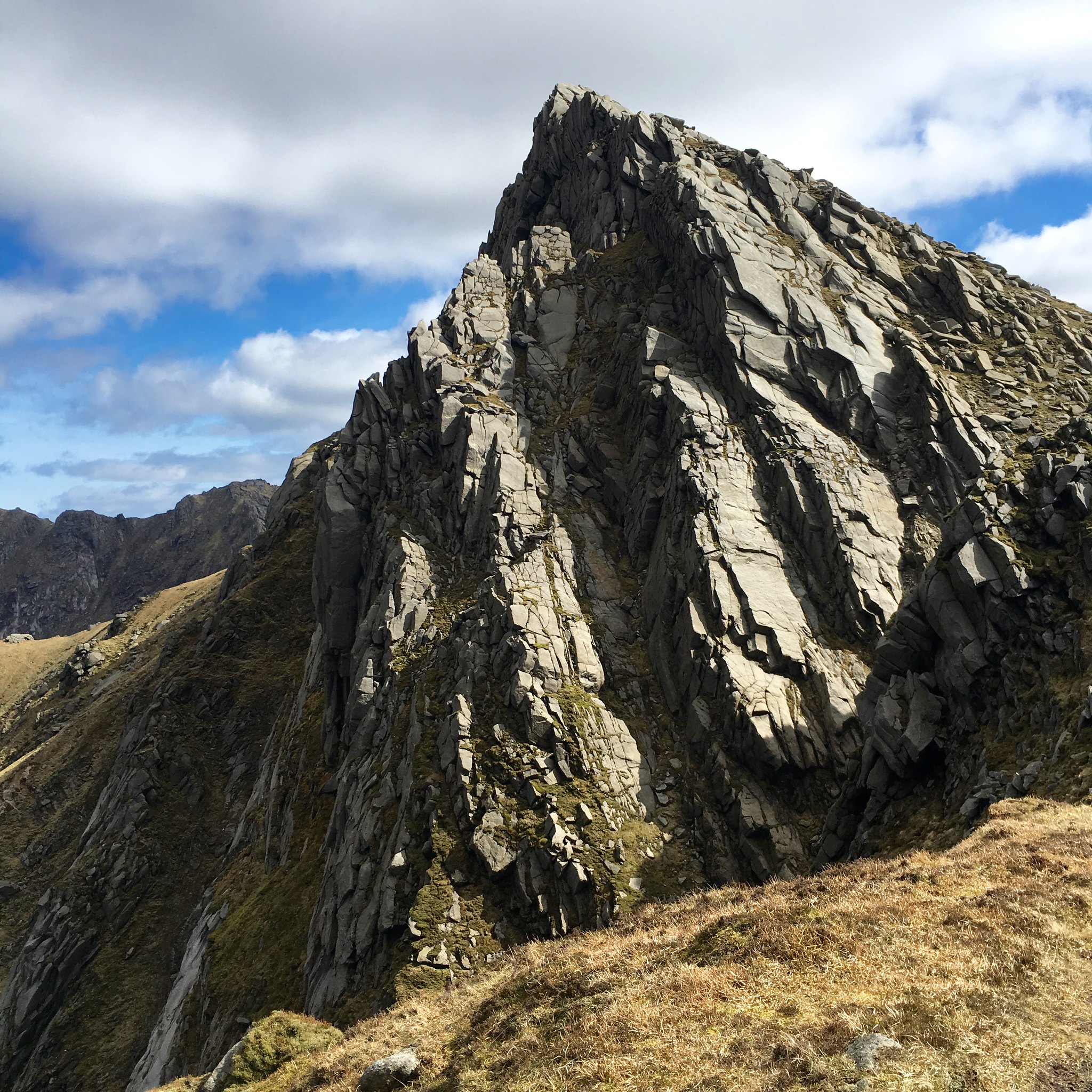 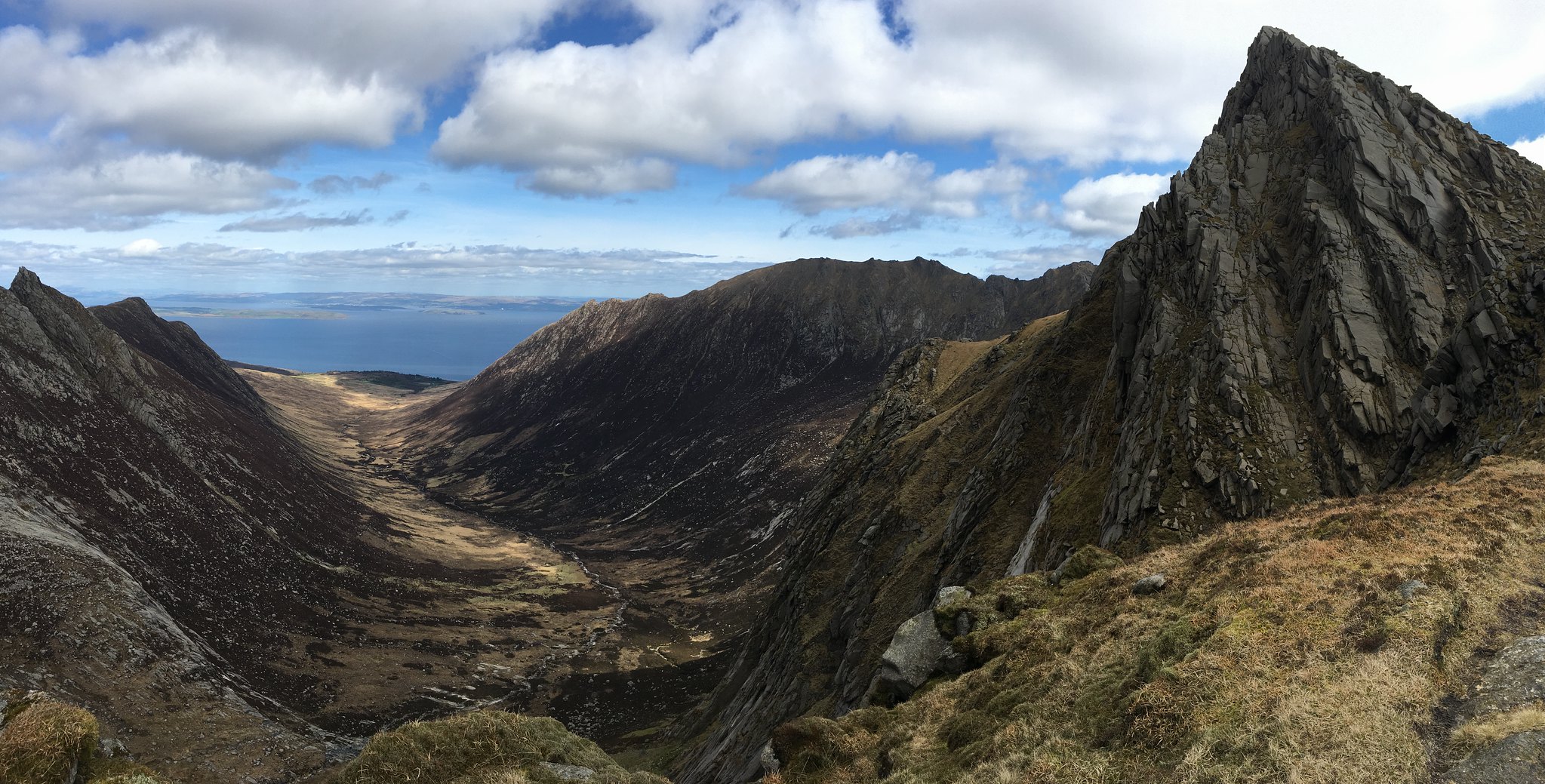 Cir Mhòr pano, with the contrasting glens Sannox and Rosa 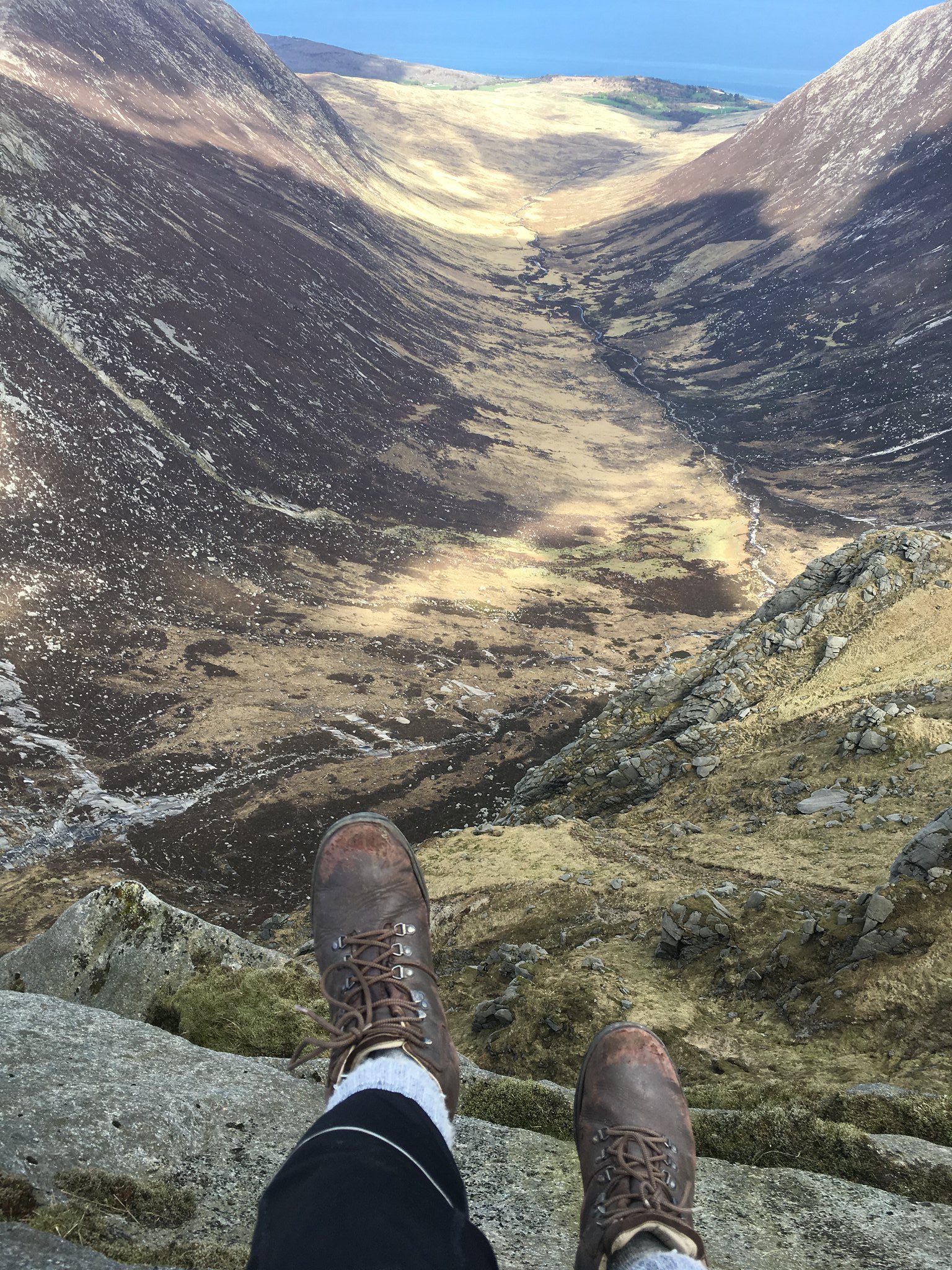 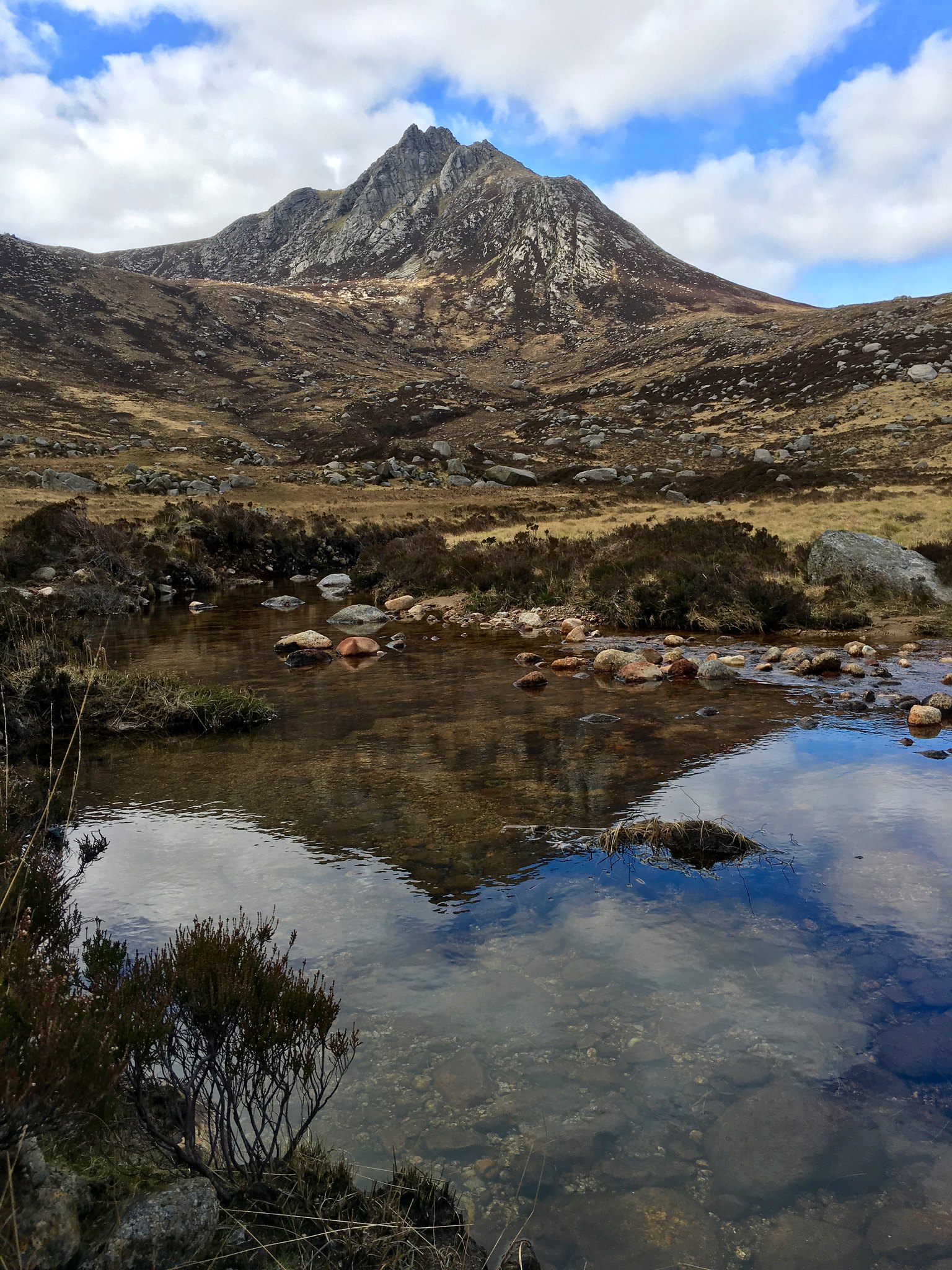 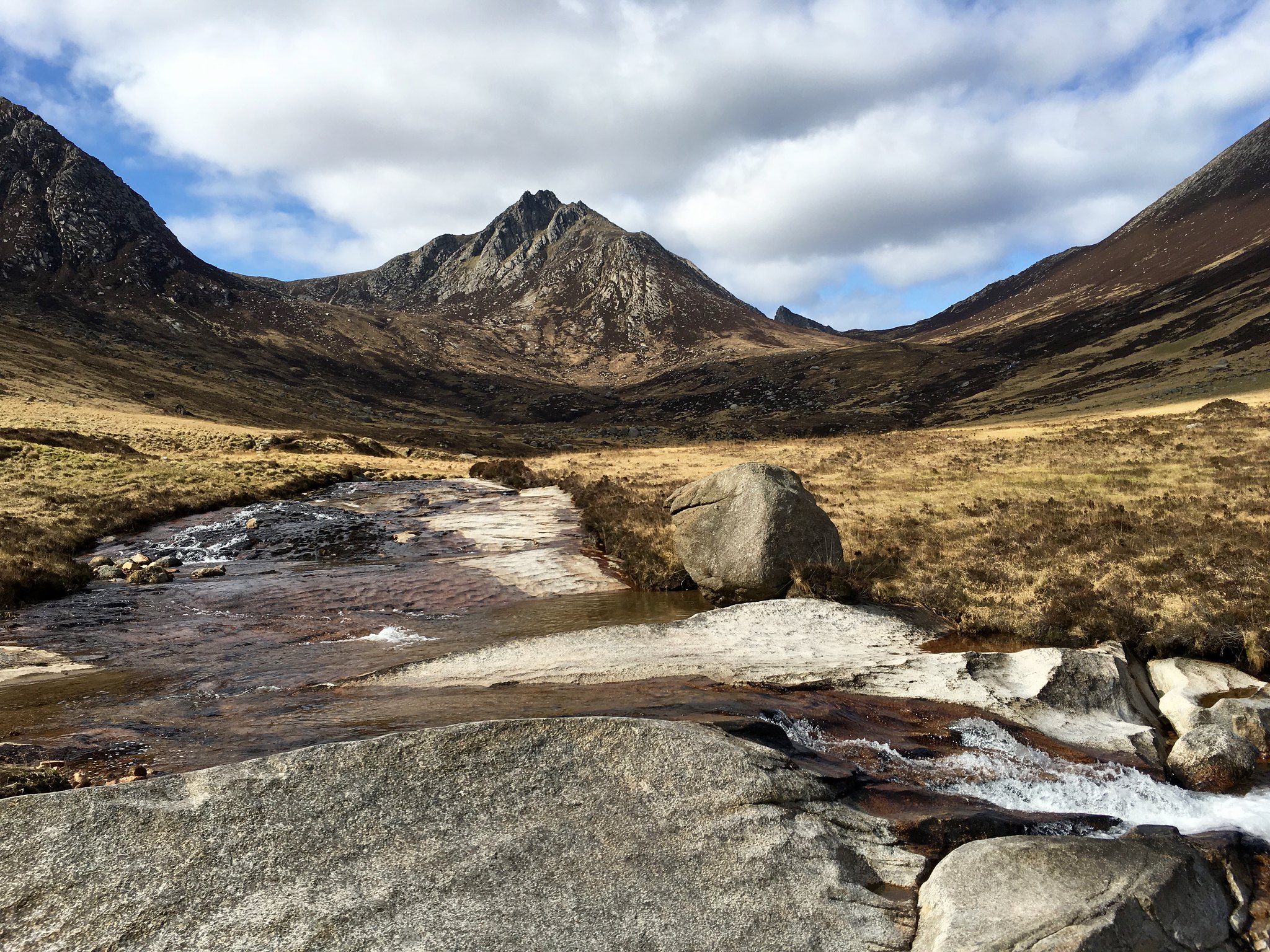 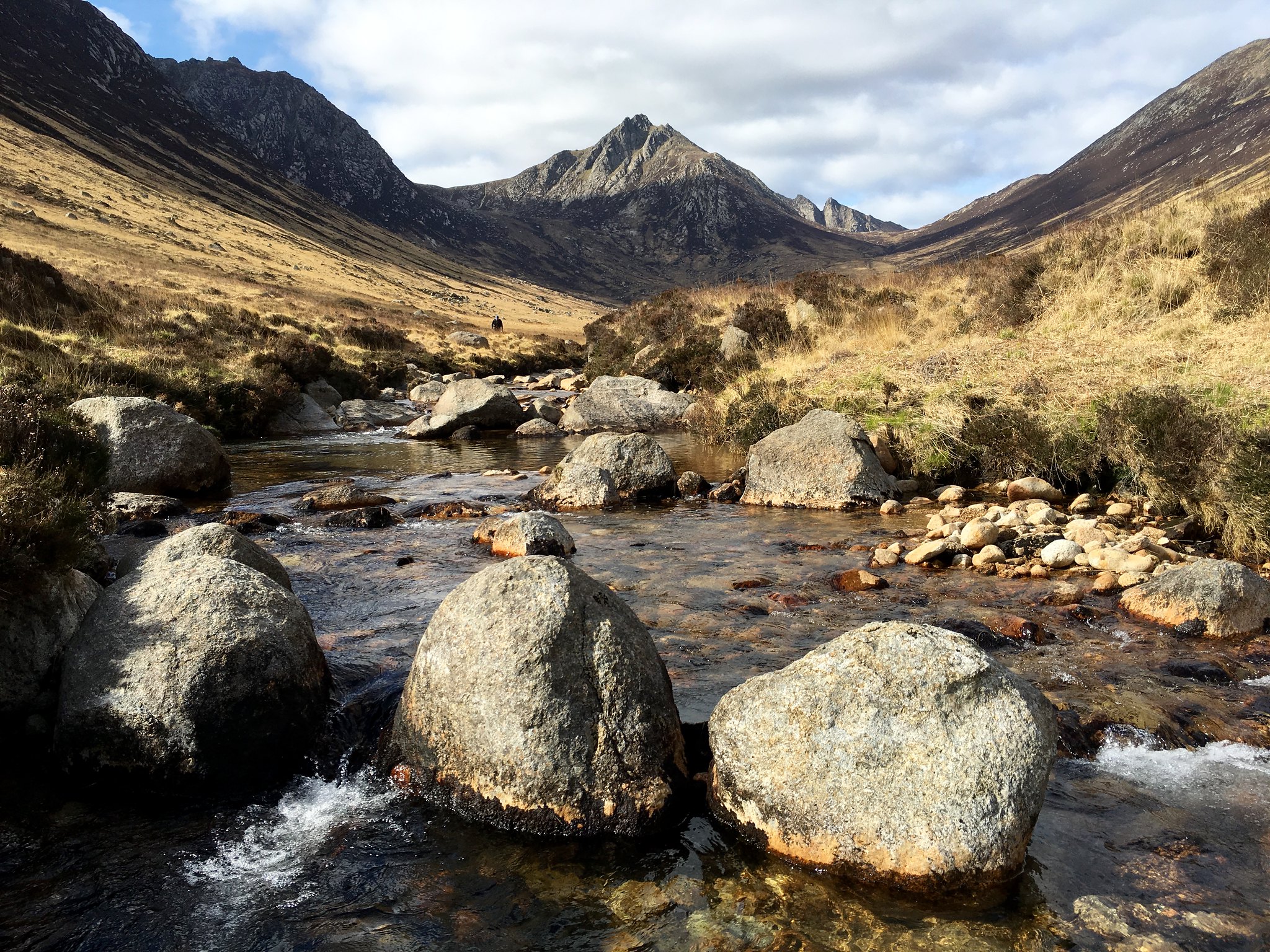 What a great read, especially after taking a beating from the weather gods. Your photos are stunning, and I love the contrast of the corries pano.