I didn’t really think these five disparate Wainwrights would merit a Trip Report, but as we kept bumping into amazing people, I thought I really ought to share the experience. Based in Scotland, we thought that the Wainwrights, with their paths and gentler profile than the Munros were the home for retirees like us, but this week really disabused us.
After a couple of days of rain and socialising with sister, we were ready for a walk . Everywhere was sodden 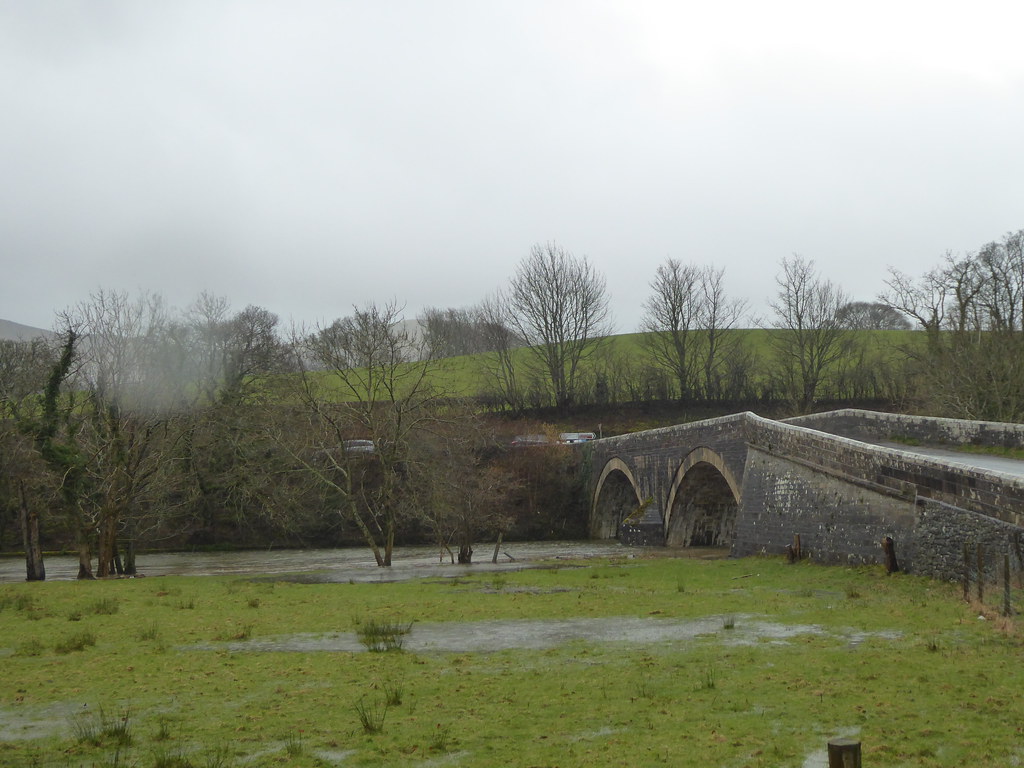 But a few lambs had ventured out into the world 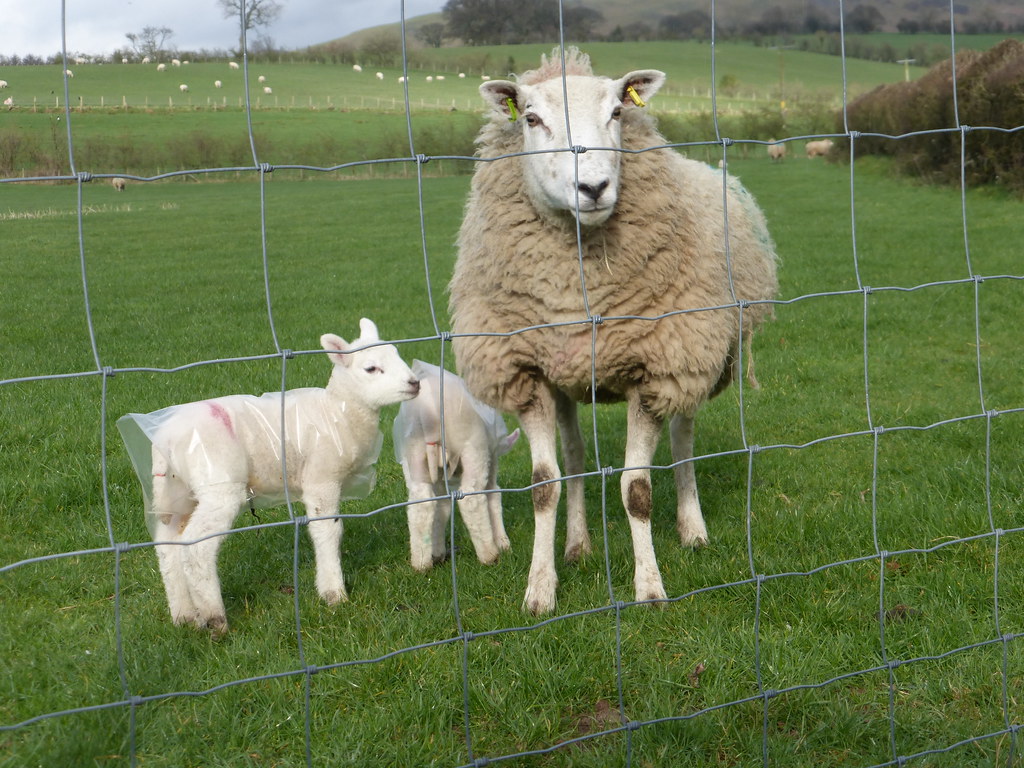 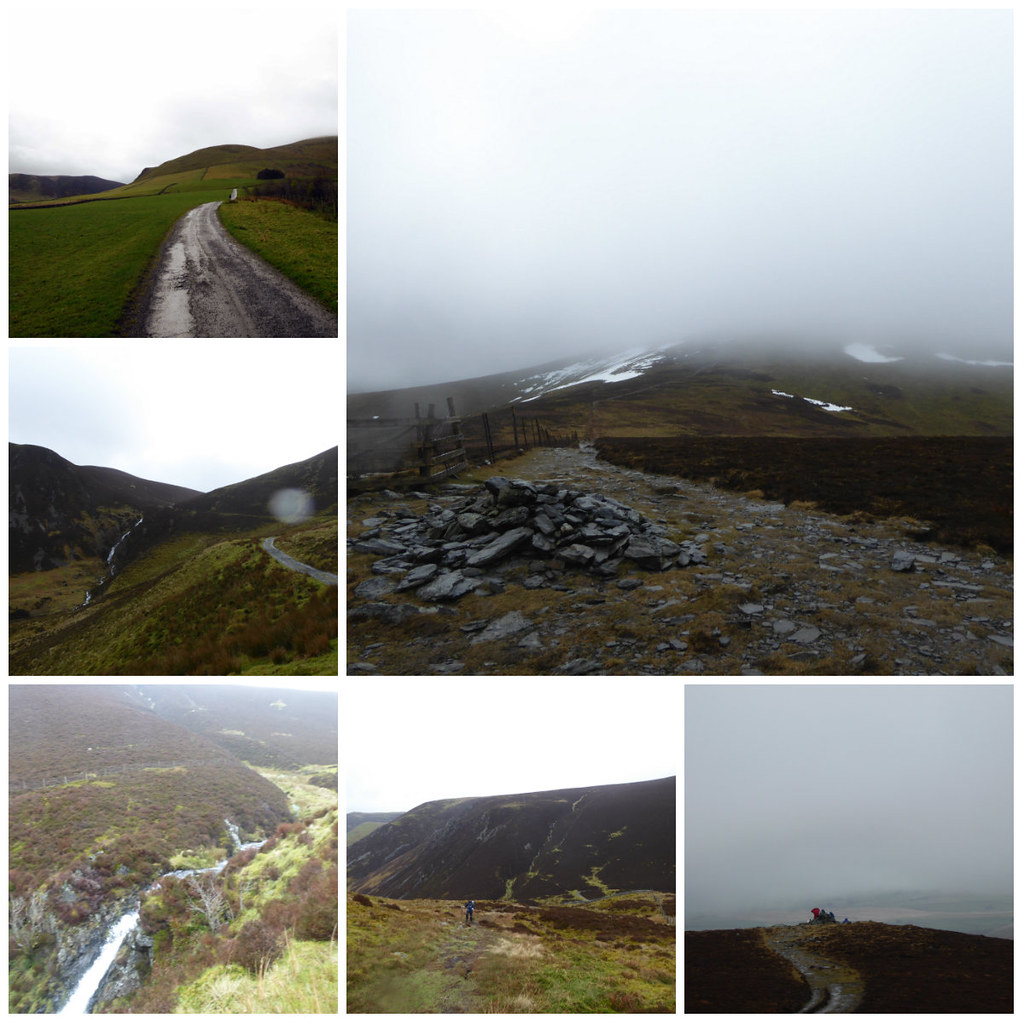 We parked at NY248232 and as we opened the gate were joined by a runner who had been studying the map in his car. We exchanged pleasantries: he thought he might do a loop round to Skiddaw House and back. The previous day he had run the Criffel Hill race, and having been up it, we agreed that the wonderful initial path soon plunged you into bog. So how had he done? We looked up his time when we got back and discovered he had been the winner, Ricky Lightfoot. Further googling revealed that he was probably the best fell runner we have ever met https://en.wikipedia.org/wiki/Ricky_Lightfoot
He loped off into the distance accumulating the metres as easily as we gather up feet…or even inches.
The rain had filled the becks and the Whitewater Dash was very impressive. Beyond it we climbed into cloud. We were already in out waterproofs for warmth so did not mind the odd burst of rain. When this group had vacated their view point, we moved over for our lunch. Then we went home the same way.

We meant to climb Crag Fell last year when we had climbed Grike, but the wind had been so strong at the summit, we hadn’t dared, and had just retreated after nearly being blown over. These hills don’t seem to like us. Despite a forecast of fair weather almost everywhere in Britain, Crag Fell managed to gather enough cloud to test our rain-proofs to the limit. On the return the substantial wind managed to blow it through one sleeve
We parked the car at NY061144 and set off up the forestry track, taking care this time to take the higher one that hugged Grike, instead of the lower, where we had made a mistake last year. Eventually we could see the mast looming in the mist, and just beyond it a gate which lead to a wide boggy path up Crag Fell. It followed the fence until we were over a stile and made for the summit, which we couldn’t see until we hit it, as we were by now enveloped in rainy cloud. We stopped at the cairn to grab a cup of coffee and a bar, and I was questioning whether we were actually there, as I thought things were looming higher in the clag. But R assured me we were at the top, as did a guy who popped up behind us, and said that he should know as this was his 54th time up here. No, it wasn’t his home hill, he was in the process of completing his 54th round of Wainwrights. Yes, it was a record, only his mate in Portinscale was anywhere near him and he had a mere 42 to his name. nigheanddonn pointed me to the hill walkers’ register https://www.ldwa.org.uk/hillwalkers/register2.php#Register2A where I discovered his name was Stephen Moore, or as R says “Stephen More and More”. We returned the same way, getting wetter and wetter.

Not a single photo exists from this walk, as R (wisely) kept his camera stowed, and when I took mine out the lens retraction mechanism started making grinding noises.

The following day we decided on a rest. We went to Maryport, but its two museums were closed on weekdays as they are now run by volunteers. We visited the aquarium instead where it all got too political as I met Grayling who looked a bit furtive about the transport situation. 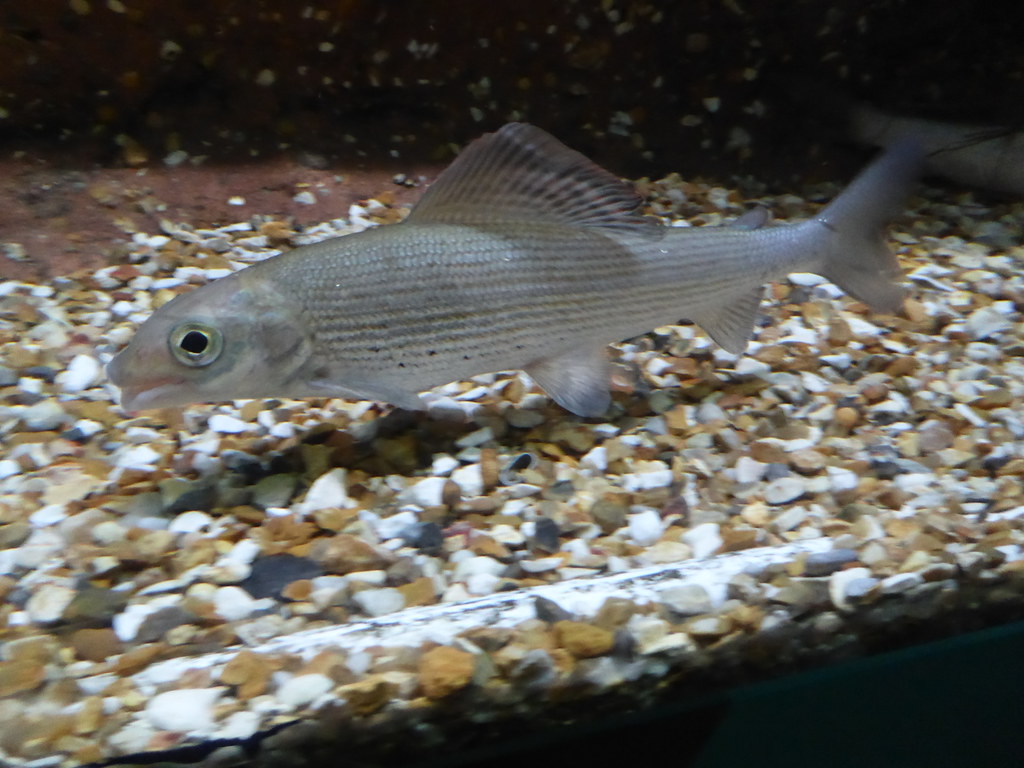 We parked as for Bakestall, and followed much the same route, though going further towards Skiddaw House and following a path up the beck to start with. 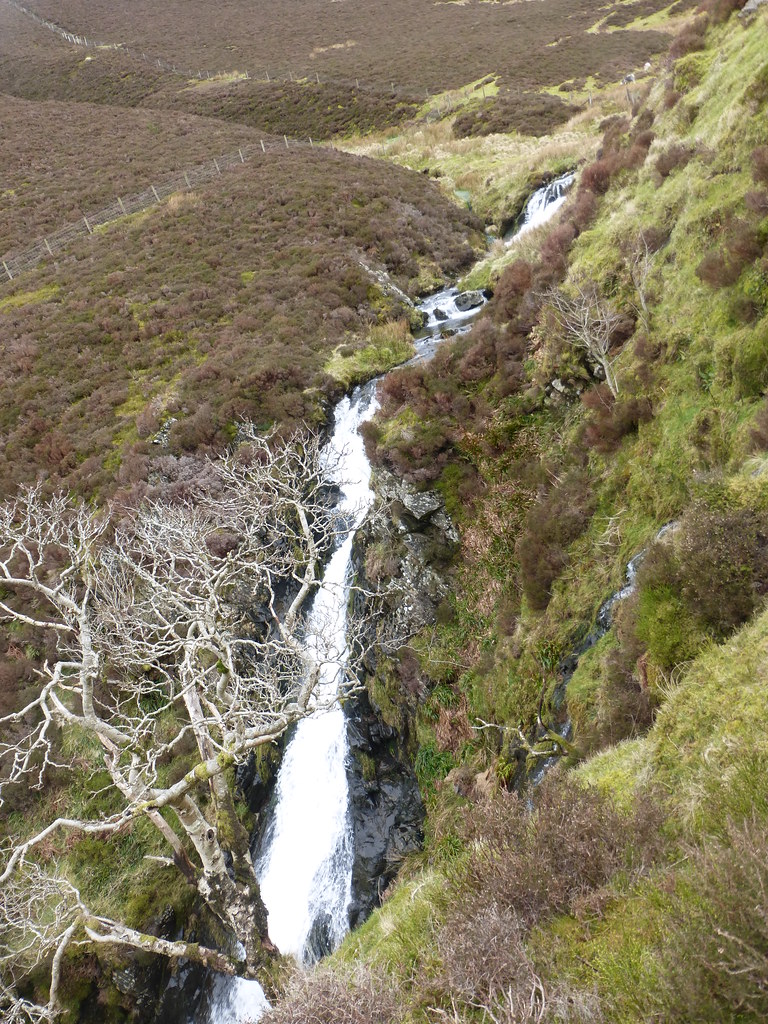 When we reached the summit, people started appearing, and we told them the story of our previous encounters. 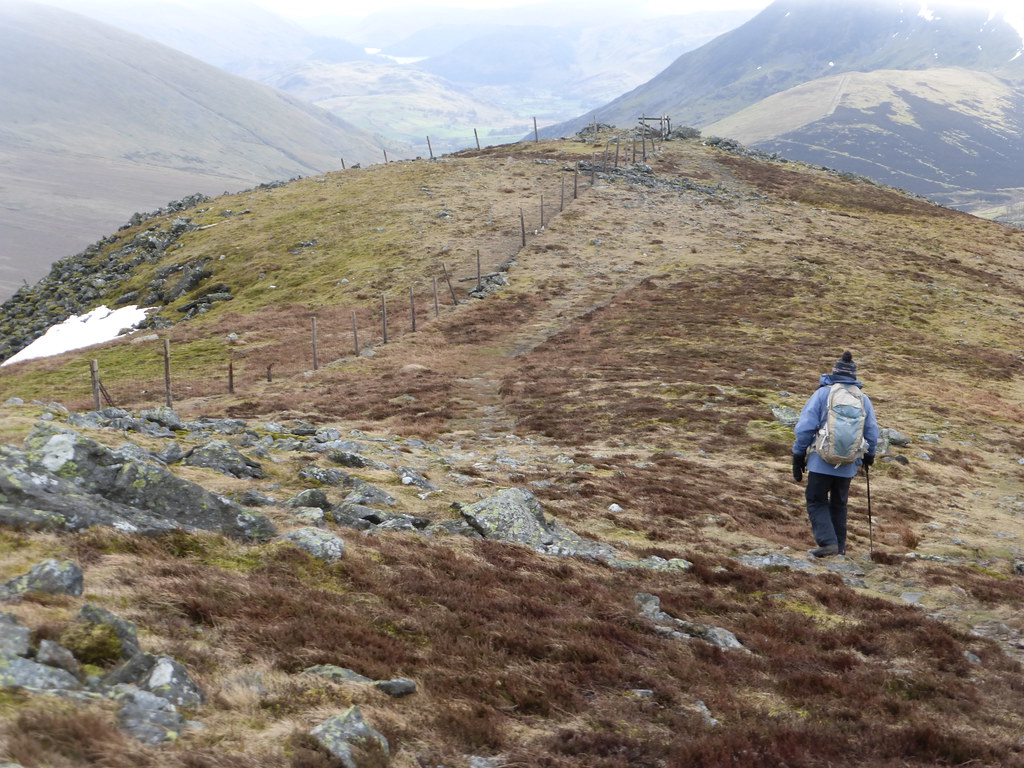 One woman from Leicester was hoping it would be the third time lucky for her with the Bob Graham round which she was to attempt in June. This was a recce with some of her support group. Then we hit the jackpot with two guys who had turned 65 last year and decided the extra hours allocated to this older age group would allow them to take on the Joss Naylor challenge . This is an enormous linear run starting in Pooley Bridge, Ullswater and finishing at Greendale Bridge, Wasdale consisting of 30 tops 48 miles of mountain terrain and nearly 17000 feet. They managed it in 18 hours and 20 hours. I am 90% sure that this link leads to them,
https://jossnaylor.blogspot.com/2019/02/john-booth-m65-22nd-june-2018.html

Does the Lake District produce so many extraordinary stories, that one can bump into a legend every day if the right questions are asked?

On the Friday, our lease of the cottage ended and given a poorish forecast we decided just to potter around to the hotel where we were to stay to attend a meet. I got the only BBC Weather Watcher Editor’s Pick of the entire holiday, a depressing view from the hotel where we had lunch 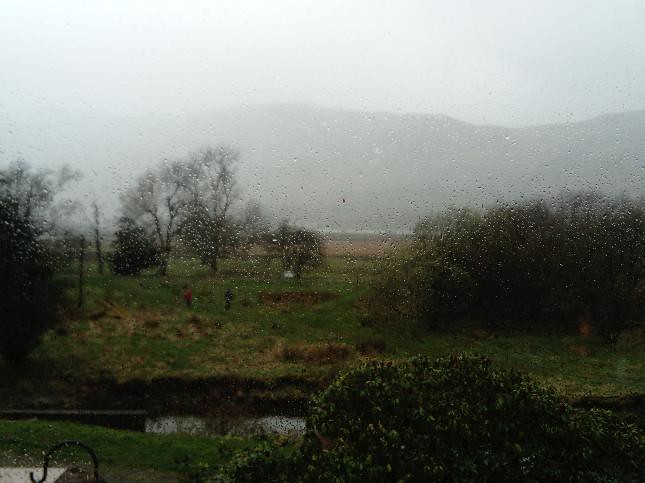 We met friends in Keswick and resolutely turned down all invitations to other hills as we are so slow, and decided on Lonscale Fell. 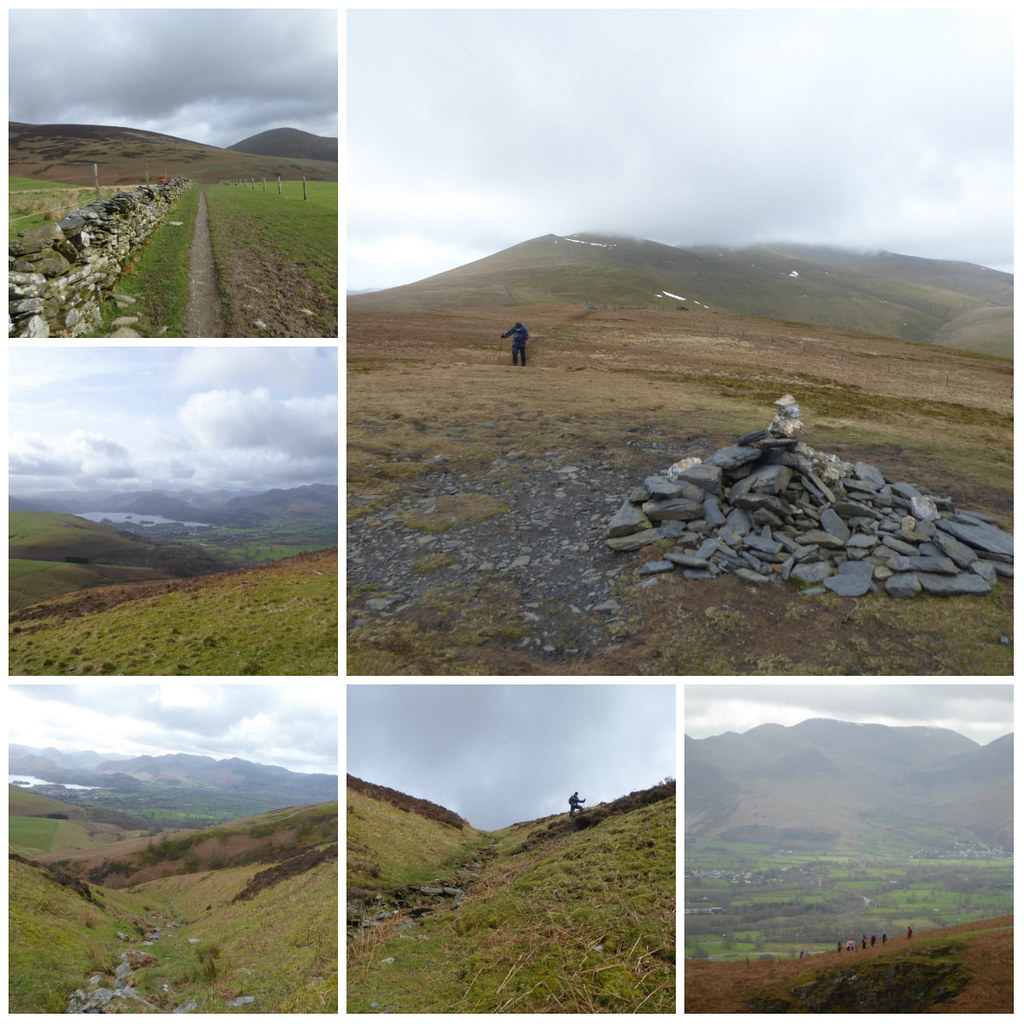 We parked in the upper car park between Latrigg Fell and Skiddaw and joined the Saturday crowds ascending Skiddaw. For a while we kept pace with a family whose reluctant daughter slowed them down, while their springer spaniel did approx. ten times their distance fetching a huge stick, but eventually they got into their stride and went ahead. We walked up to the fence at NY 272275 and then followed it to the summit of Lonscale Fell. From here we headed along a tiny path towards the car park, eventually meeting the big track back. It was very steep in places. As we were only about half a mile from the car-park, we met a woman and stopped to chat. I said that I was disappointed today, as the Lake District had produced legend after legend, and unless she could pull something out of the hat, the theme would die today. “As it happens,” she said grinning broadly, “have you heard of the Frog Graham round?” We hadn’t, but she had, and moreover was only the second woman to do it. This is like the Bob Graham, but with four added swims through lakes. https://www.froggrahamround.co.uk/the-route#route-information
She achieved it in 2017 when she was 58 and was only the second woman to do it (Charmian Heaton). She told us that she had become totally benighted on Cat Bells and had managed to get down to Derwent Water. Once there she was thinking what a waste it had been to put in all that effort and then have to give up almost at the end because she couldn’t locate the three islands to which she needed to swim, and then run across them. Luckily a friend met her there with a kayak and she followed his head torch across the water and managed the whole thing in less than 24 hours. That was only a year after the battering her hips had taken from fell running had necessitated a hip replacement. They showed her the femoral head so she could see how wrecked it was, and she had asked if she could keep it, as she thought it would make a great head for a walking stick. She complained that it was hers and had been part of her body when they refused, but they were adamant: it simply wasn’t allowed.

We arrived back in plenty of time to meet up with the others at Wetherspoons where we only got a table because an incapable stag party was being evicted.

We left our car in the public car park at Scales and set off up the track to Blencathra, 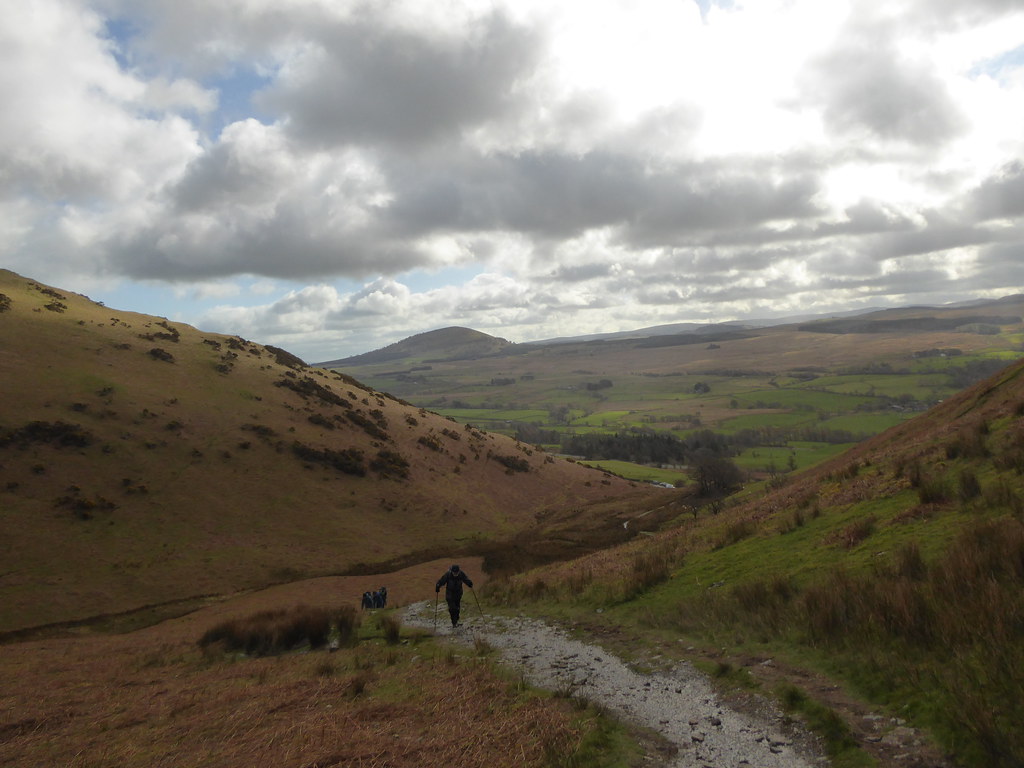 Most people seemed to be heading up towards it. 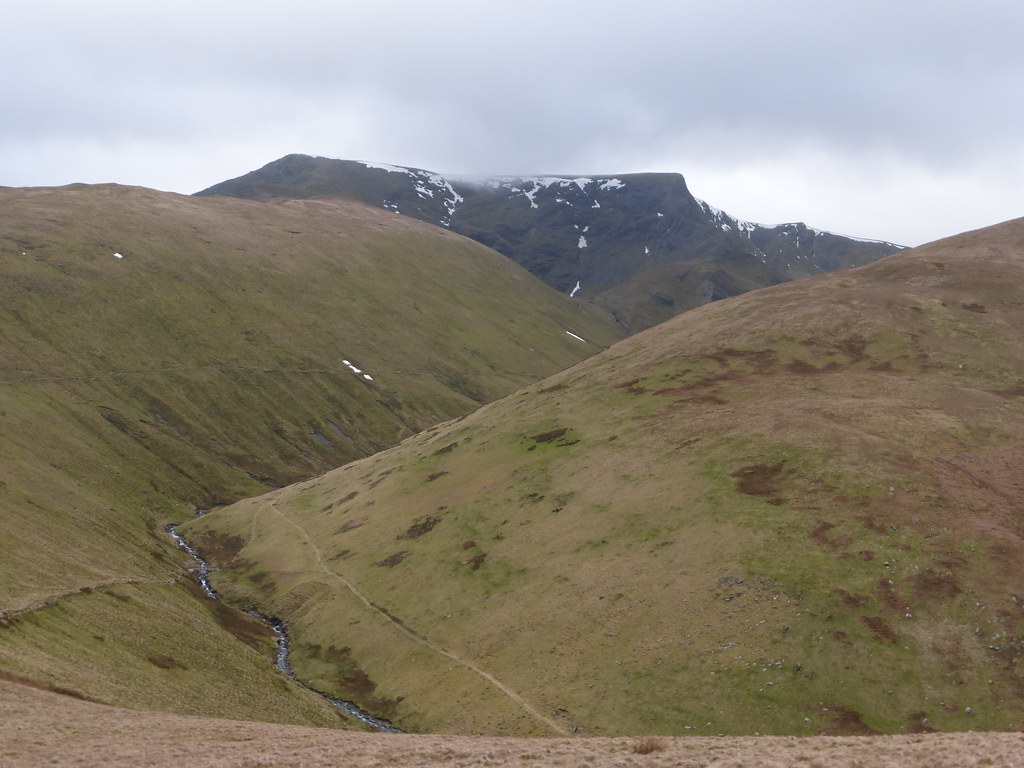 We diverged from it to skirt the Combe Beck, here we met the only walkers to whom we talked all day. The wee two year old will have to reserve his place as Lakeland Legend for later. He was removed from his dad’s pack when the stony stuff began and had a great time walking over the rocky bits with his plastic geology hammer (or possibly a chunky ice-axe?) They start them young these days.
The wind got up as we reached the top, and we were having a hard time staying upright, so although we had intended to retrace our steps, we decided to get down as soon as possible, which meant doing the traverse and walking back along the road.

A final visit to Wetherspoons to check back with the remaining friend who hadn't headed home.

When we got home I opened a brown envelope and discovered that I shall soon be able to upgrade on these outings, as I am shortly to have an age related increase in my State pension of 25 p. per week.
Two photos only, as my camera was still misbehaving.

Looks like awful weather but glad you made the most of it. The people certainly add something to the Lake District, you can find solitude but also normally somebody interesting to chat with. I certainly will never tire of the place.

Ooops, sorry about that, I got it the wrong way round . From the website " The route starts in Pooley Bridge, Ullswater and finishes at Greendale Bridge, Wasdale. " Have now changed it in the main text. Many thanks.

A mixed weather week amongst a good scattering of fells there, well done for sticking it out

I didn't realise when I wrote this report quite what a legend we had bumped into in chatting to Ricky Lightfoot. He has just completed the Lakes in a Day race in a new record beating time.