I psyched myself up for this one, knowing that, as always, heading for the hills would likely soothe my angst, at least to a degree, and that even if it didn’t, fresh air and exercise would be better than sitting at home fretting. It was Saturday, and I’d found out on the Thursday that I’m being laid off, but I won’t be told any details about it until Monday. Nice.

It looked like a good route (borrowed from BHK), and I’d really been looking forward to it some six months prior, when my plan went awry for heeding the estate’s wishes with regards to stalking. When I parked up at Ballimore today, the same “stalking in progress” sign was still posted, but I mostly ignored it. I think it’s rather disingenuous to keep such a sign posted year-round, and I felt shades of a Glen Lyon “we really don’t like walkers much” attitude at work. Screw it, I was going anyway. If I got caught out, I’d plead ignorance. 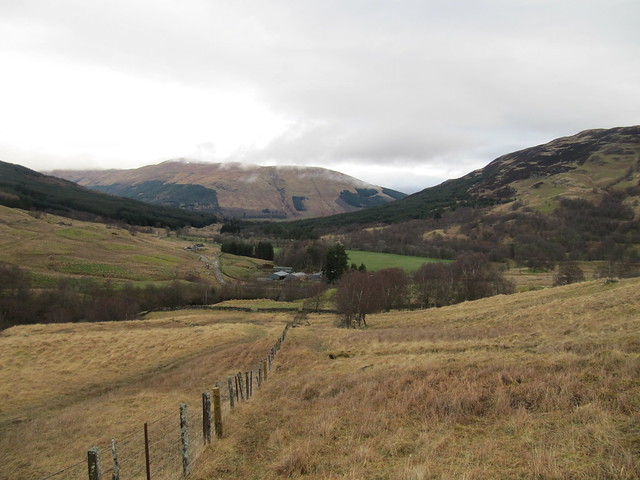 looking back down after just starting out. I'd already gone wrong; should have been on the other side of the fence and closer to the river

I went wrong several times, and had to laugh when finally I rounded the knobble of Sron a Chonnaidh only to see a digger along a new hydro track that would have greatly eased the way to the bottom of my first hill. Ach, well, I’d taken the purist scenic route. 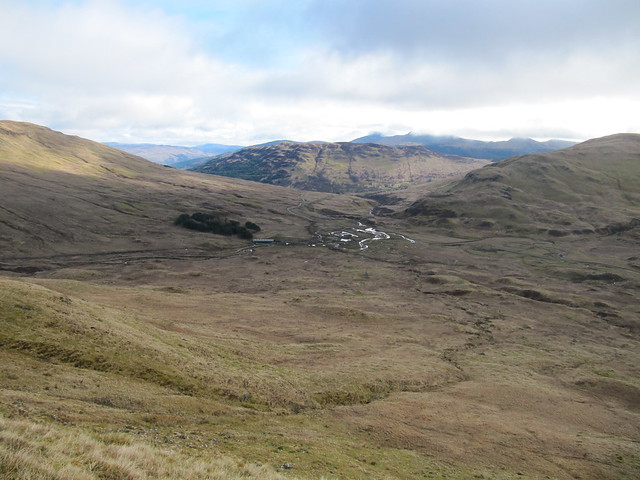 just after starting the ascent, looking back down on the digger and the new hydro roads

The first steep ascent was brutal, and that by-now familiar feeling of nausea and retching hit me at around 500m; after only a couple hundred meters of ascent. Two sleepless nights, no brekkie, when will I learn? I found a rock and sat until I felt better and continued my way up. It’s probably unnecessary to say that my progress was pathetically slow; this theme continued throughout the day. But it was still early, and I had plenty of daylight, so I wasn’t particularly bothered. 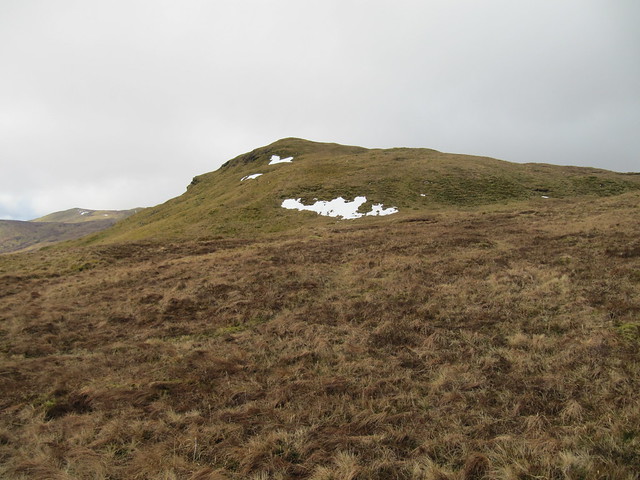 a couple of lingering snow patches just below Creag an Tull

I was happier once I’d topped out on Creag an Tull, the slope eased, and my first summit finally came into view. The wind was icy, and there were a few spits and spots of sleet/hail; I stopped to don jacket, hat, and gloves. 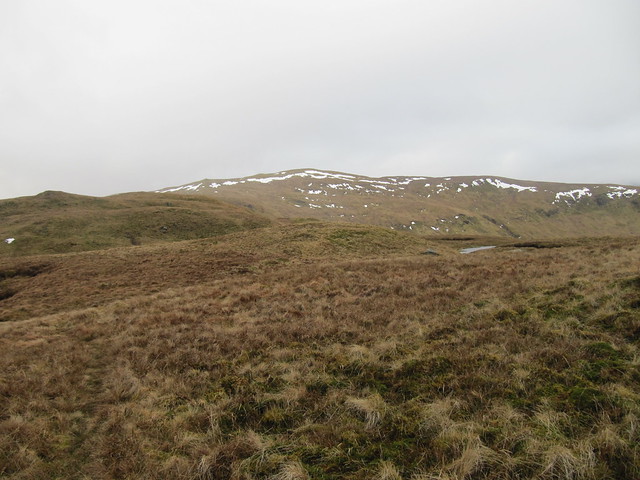 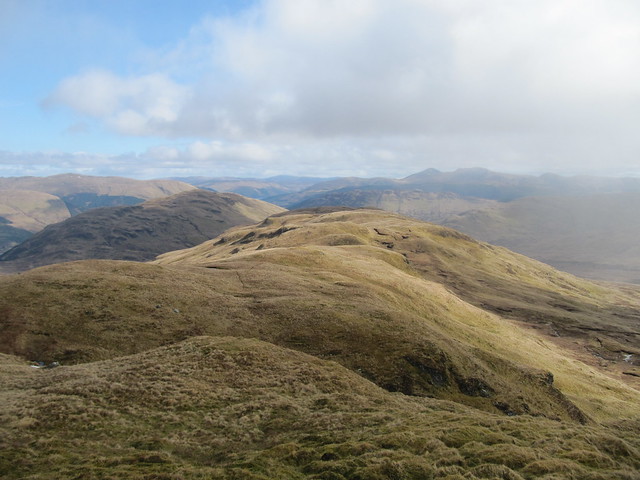 looking back over what I've covered so far; Creag Mhor left center

I eventually reached the trig point on Beinn Stacath after taking a small detour out to the cairn that looked straight down into the glen. The view from the top was magnificent; hills in all directions, with the Crianlarich Munros dominating (specifically Ben More and Stob Binnein, but also Cruach Ardrain and Beinn Tulaichean). These hills are holding a fair amount of snow, whilst both Ben Lomond and Ben Chonzie, in their respective distances, are entirely snow-free. 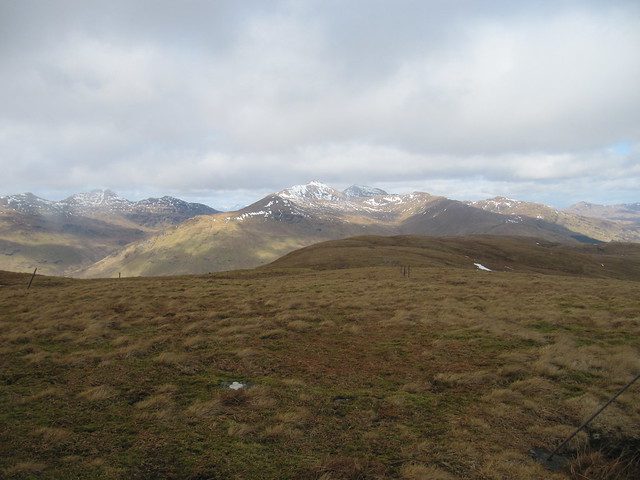 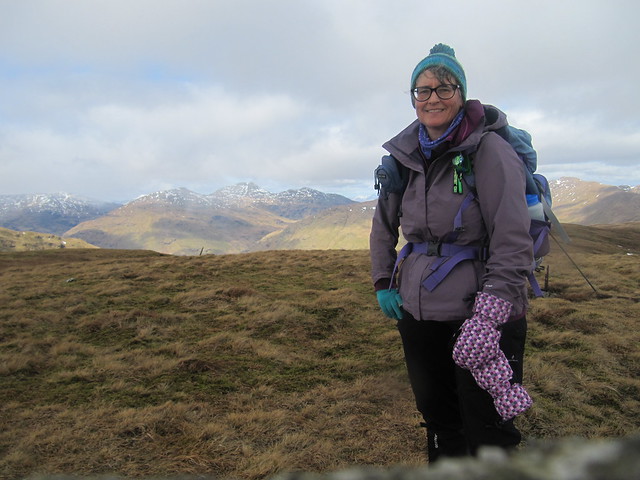 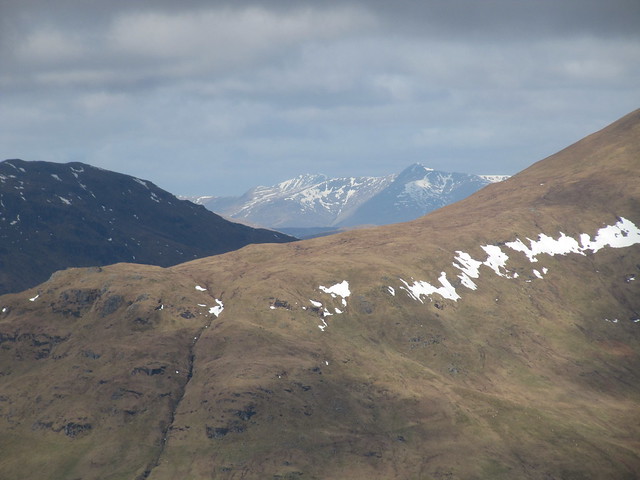 couldn't figure out what these hills are, between and "behind" (further afield) the Crianlarich ones

After taking a few photos, I trundled down along the ridge, the view keeping me company. It was mostly pleasant walking over grassy slopes occasionally interrupted by peat hags and boggy sections. I’d started worrying about the descent down to Bealach Driseach, which looked like it might be quite steep both on the map, and from where I stood (ala “dropping off the edge of the earth”). When I reached one of the lowest points along the ridge, the descent down to the glen looked quite manageable, so I decided to go down from that point and traverse around the crags to make my way to the bealach. 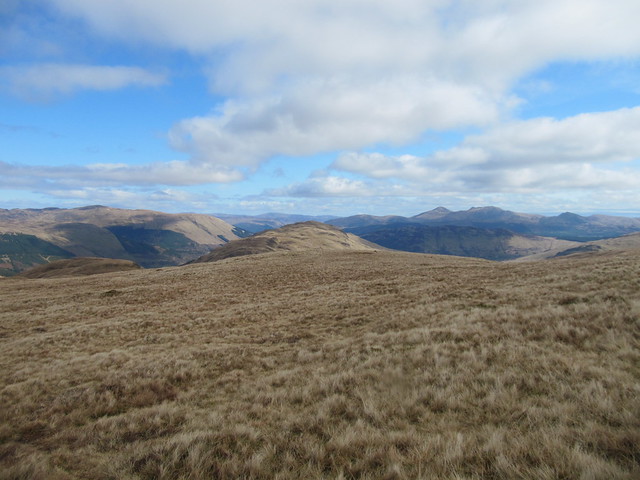 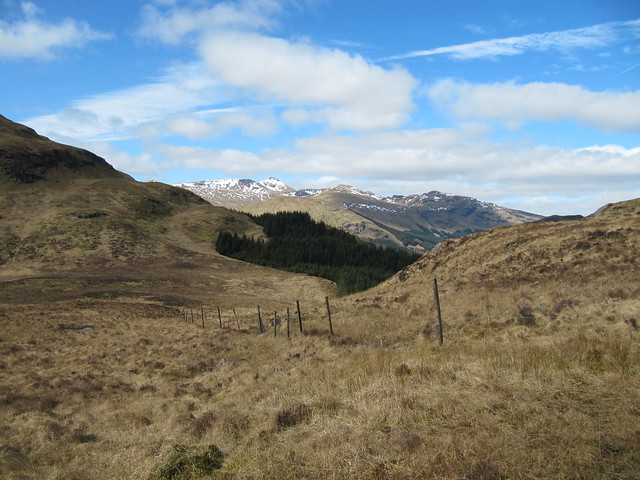 looking back down to the bealach (and across to the hills) from just starting the ascent up CM; sky brighter now 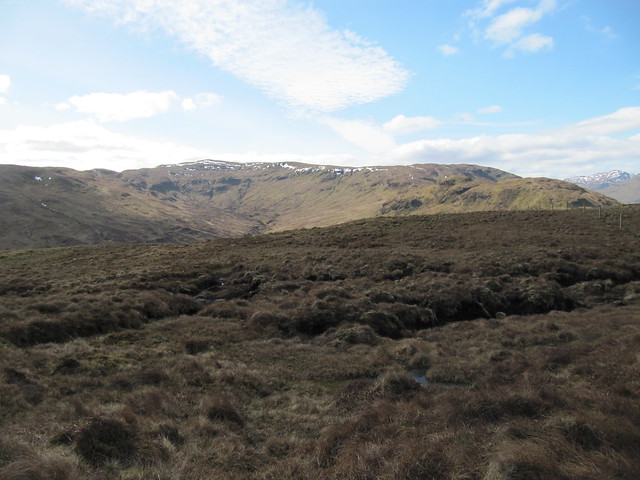 The climb up Creag Mhor was endless; false top after false top, and I struggled mightily with each section of ascent, a couple which were quite steep. Finally, to my surprise, after seeing nary a soul all day, I caught sight of a man standing not far above me. “Please tell me you’re standing on the summit,” I called out. He assured me that he was. I collapsed onto a flat rock near the summit cairn, and we struck up a conversation. I thought that he’d come along behind me and had somehow overtaken me without me seeing him, but no, he’d only come up the Graham from near Ballimore. We chatted for a while, then decided to walk down together. Peter, he was, from Edinburgh, a very nice man, and I was happy to have some company. He’s working on bagging all of the hills over 3000’ in the UK and Ireland, following in his father’s footsteps. But he keeps getting distracted by Corbetts and Grahams.

(I seem to have taken no further pics.)

We continued chatting as we descended, clambering through a deer fence for which there was no visible stile or gate. We had to go through it again, but this time managed to spy a gate (tilted, tied – that is not intended to be opened – and not particularly well secured, making its crossing precarious). These obstacles bolstered my opinion that this is a not-particularly-walker-friendly estate/farm. We reached the hydro track just after crossing the gate, where we parted company; Peter heading left to his car, and me heading right to mine.

I was totally shattered when I got home, around 5pm. It had been a longer day than I’d anticipated. It was absolutely the right thing to do to go, but the outing did little to banish the worries of what my future now holds.