This is my first report. A fabulous day in the area around Braemar with clear skies and good walking.

I had been intending to climb some of the hills as a first Munro outing for my new(ish) mountain bike (and my first with a bike). Therefore, with the MWIS forecast for Sunday good, I set off from Loanhead to Braemar on a wet Saturday afternoon. I checked into my B&B around 6pm and had a quick feed and pint before retiring to bed to watch Match of the Day and have an early night, in preparation for a long day to come.

I awoke on Sunday to bright sunny skies and a clear head. I scoffed down my porridge, bacon and eggs and drove to the car park at Inverey. As I set off through Glen Ey on the 8.5km track to Altanour Lodge there was a cool westerly breeze but, in general, this was a glorious spring morning. The first km was hard work but the gradient soon eased and I began to slowly eat up the miles. 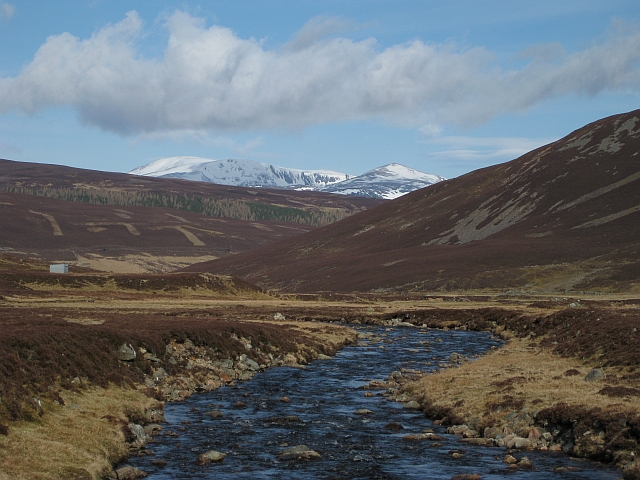 I reached the lonely ruin of Altanour Lodge about 11am, which was a little later than I was hoping for (I freely admit to being better on 2 legs than 2 wheels), where I left the bike.

Glad to be walking, I started on the path to Carn Bhac. The route was fairly obvious - the path climbs gradually through heather, passes a line of about 20 grouse butts, gets lost in some peat hags, then re-emerges on the crest of the ridge. After negotiating these minor obstacles, I was soon gaining height and distance on the gentle slope to the summit of CB. The views for 360 degrees were spectacular - north to the Cairngorm massif, west to Beinn a'Ghlo, south to Beinn Iutharn Mhor and An Socach (my targets for the rest of the day). I sat in the summit shelter for 15 minutes taking in the scenery and eating my prawn sandwiches (Roy Keane, eat your heart out!).

My next target was obvious - the steep scree strewn slopes of Beinn Iutharn Mhor. I descended without difficulty to the col below Point 920 but my progress was now impeded by the sea of peat hags which must give Carn Bhac it's name. I stumbled through this peaty mess for about half an hour before reaching the low point below BIM, losing the rubber feet and baskets off my walking poles in the process (mental note: poles and peat don't mix). My energy sapped from the bog, I had another rest and ate a Macaroon bar. The ascent was steep and I took regular breathers to allow the blood to flow to my legs. In my mind, An Socach was now a long way off and I doubted whether I would manage it on this trip. However, as the gradient steepened, the going actually got easier as hands were able to supplement leg power and stoney ground made for good steps. 45 minutes climbing brought me onto the summit plateau and the trials of the past 90 minutes faded. I skirted round the snow corniced corrie and traversed easily to the summit of BIM. The views now were of Glas Tulaichean and Carn an Righ. Carn Bhac appeared as but a small hill in front of the bulk of the Cairngorms. I sat a while and took more photos. The weather was holding and my spirits were again high.

I now had a decision to make - continue on to An Socach or descend into the glen beneath Beinn Iutharn Bheag and return to the bike? A quick glance at my Landranger map made the choice an easy one. By skirting around Man nan Carn then BIB, I could avoid any "unnecessary" ascent and leave only a steep 200m climb to the conveniently placed western summit of An Socach. The lack of countour lines around Loch nan Eun suggested damp ground, but I was in no hurry and 3 weeks of good weather convinced me this would be no great problem. Added to this, I was feeling strong again and there was plenty of daylight remaining (thank God we are back on BST...). As I tramped over this pathless wilderness, I was accompanied by a family of badly disguised mountain hares still in their winter coat, and a herd of deer passing from Glen Ey to Glen Taitneach. I was really enjoying the solitude of this spot - it may have been a long walk to here but it was well worth it. 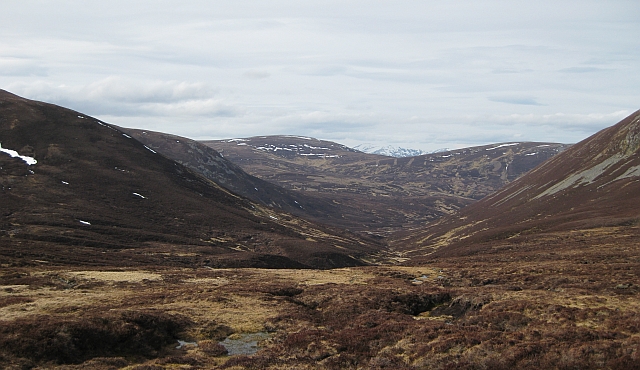 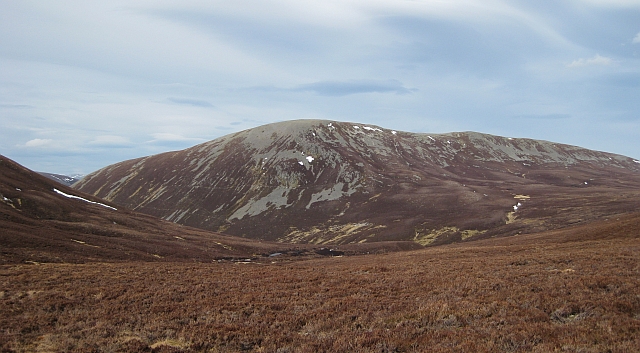 I crossed a sharp gully (not really represented on the OS maps) and a short walk over heather brought me to the foot of An Socach. Here I joined a small path which I presumed must have come across from Carn a'Gheoidh. Again the way was steep, but I knew there was not far to go and 20 minutes climbing brought me to the summit cairn and shelter. I didn't dally long and the route ahead was clear. I initially descended gradually along the western shoulder of AS, then steeply over heather and moss back into Glen Ey, taking time for one more photo.

I nearly came unstuck trying to cross the Allt Beinn Iutharn but short walk upstream and a Soldier's Leap-esque jump saw me safely across. I arrived back at Altanour Lodge at 6pm - 7 hours after leaving it. The ride back to Inverey was a pleasure - what had taken me 90 minutes cycling that morning took only 35 going back as I engaged high gears and freewheeled most of the way. The whole route had taken 9.5 hours and I had covered 37km distance and about 1200m ascent.

I hope I haven't rambled (boom boom) on but I wanted to write this before too much of the memory faded. I take no offence if you skip some of my dodgy prose but hope you, at least, enjoy the photos!

Oh you jammy git ..well in walk conditions rather than views i suppose..

1 week earlier this was conditions in the same area..

dont know if you saw this report ..was fab but our route to carn bhac or an socach would have took us months that day

yep agree with doogz, a fantastic first report there...can never get the motivation to write up my own on the day... have a few to do now because of this....

I knew an old lady from Glen Ey, at least her folk came from there before they were cleared out. Her ancestors had fought at the Battle of Culloden, and when they returned with the news of disastrous defeat, they had walked back over the hills in the snow, in their bare feet.

That's a great first report; the photos really capture the feel of that empty area. I love the first one, with Ben Macdui and Derry Cairngorm (I think) popping up looking back down the glen.

A good detailed report with a fine set of photo’s

A great report, looks and sounds like a fine trip. That bike ride at the end must have been a great way to end the day!

Beautiful photos of my favourite place in the world - Altanour and Glen Ey! Also love the pic of the white hare and the deer - I'm sure it'll snow some more yet so think the hare won't go brown for a couple of months yet! You did well to do them all, I just did Iutharn Mor and the one next to it. I did An Socach from the glen the other side (a really nice walk) - it's a pretty big dip between that and the rest!

Thanks for the kind comments. There was almost no report at all after I managed to lose my first draft just as I was about to post it