Bruce had seemed reluctant to head out to the pub when we got back to the house after our day on Beinn Airigh Charr. John and I on the other hand felt that it would be quite rude to spend two nights in Gairloch without visiting the local hostelry and spending some money in the local economy. In the end we returned to the house, had a quick shower each and headed out to the pub. We soon found why Bruce was so reluctant - the minute he walked in the door he was accosted by a couple of old friends from back in the day and before you could say John Rooke Corbett, we were involved in what looked like it would soon develop into a full scale drinking contest!

Bruce and I both somehow contrived to get ourselves involved with the 5.something percent Twisted Thistle IPA whereas John had the foresight and common sense to opt for the 3.something percent craft lager offering. While Bruce and his two mates weren't looking, John and I managed to slope off in the direction of the dart board and pool table while Bruce and his two mates reminisced about stories from their past and the latter two drank themselves right through the 8pm curfew that their respective wives had allegedly placed upon them. At least we didn't have that problem, although there was the slight issue of a steak pie dinner to cook once we got home!

One of Bruce's mates eventually left to go and face the music but the other one was having none of it. The three of us eventually decided that discretion may be the better part of valour and stumbled out into the dark to negotiate the tricky walk back home along twisting, unlit paths between fields and properties, hopefully avoiding the river into which Bruce fell one Hogmanay.

How the three of us managed to pull a steak pie, chips and peas dinner together after that will remain a mystery long after I have departed this mortal coil. Suffice to say that I reckon Raymond Blanc would have been mightily impressed and may even have offered us jobs in his kitchen had he been there to observe our working practices and to sample the end result. Personally I think the peas were overdone but maybe that's just me being too fussy!

Despite the inevitable roughness and being robbed of an hour overnight by the Great British Summertime, we were up fairly sharpish the next morning and back into Master Chef mode for a damn good fry up before packing up, giving the place the once over, and hitting the road for home. But before going too far south, we had some more business to attend to, in the shape of the Graham Beinn a'Chearchaill from Bridge of Grudie.I'd like to say we were all dead keen, but that would be a blatant stretching of the truth. Bruce was talking about waiting for us in the car, John was going on about having to "dig deep". I was itching to get cracking.

We parked just north of Bridge of Grudie in the shadow of one of my favourite views in the entire country and walked a short distance south down the road before following the stalkers path past the old cottage into Glen Grudie. The loss of an hour overnight meant it was now technically British Summer Time and the weather was playing along with it. Layers were soon shed as we climbed gradually into the glen towards the junction of the path that would branch off into Coire Briste and lead us up onto the high ground south of the summit. Back down Coire Briste Top of the coire

From the top of Coire Briste it seemed like an endless pull up gradual rocky slopes to the summit, but at least the views were rewarding us in all directions. 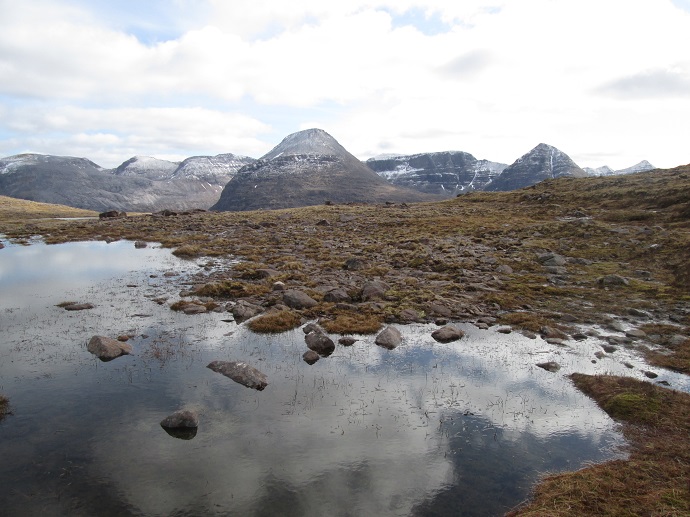 I had long coveted this Graham summit having seen and heard many reports and read the description in the SMC book. I was not to be disappointed on this first day of summertime 2019. 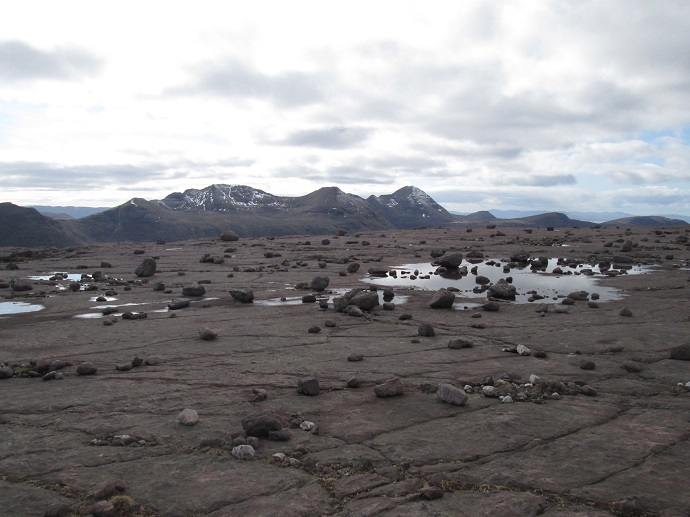 Bruce approaching the summit across the airstrip, framed by "two classy Corbetts" Staring straight into the jaws of Coire Mhic Fhearchair Sail Mhor and the back door of Liathach Eleven years since I have been on Beinn Eighe or Liathach Bruce leaving one classy Graham, framed by those "classy Corbetts"

It had been a stunning start to summertime 2019 and as we descended back towards Glen Grudie, my mind was awash with possibilities for outings over the coming months. And it was Sunday and I didn't have to get up and go into work tomorrow. Don't think Bruce appreciated being constantly reminded about this!

For some strange reason, an old Mungo Jerry song then became lodged in my brain, hence the title of the report. Slioch on the descent - relieved to see it's still there! As Bruce was driving, the unfortunate duty of emptying the contents of the cool box on the journey home fell to John and myself. Oh well, someone has to do it!