Blimey, I still can’t believe the stats from this walk. In the aftermath, I feel as though I’ve done a substantial Munro round with a long approach and more than 1000m of ascent. I’m hobbling around the house with aching thighs, a sore knee, and general tiredness even after a mostly solid night’s sleep. But let me start at the beginning.

It’s been a rough week. As fully expected, I was “restructured” right out of employment on Monday, and am now processing myriad emotions, ranging from rage to fear to sadness to resignation (no pun intended) and everything in between. I’d been in touch with Jimmy as events unfolded, who correctly surmised that I could do with a bit of cheering up, and he offered to meet me in the Borders for a bit of Donald romping (hm, that sounds a bit naughty; I’ll leave it

). We met at the Grey Mare’s Tail carpark at 9am; I’d already done White Coomb and Lochcraig Head with Simon a couple of years ago, but J had planned a longer route that included several more summits that were new to me.

We were both surprised by the amount of snow that our hills held. I hadn’t even really considered snow, although I suppose I should have, had I paid a bit more attention to what the weather had been during the week. 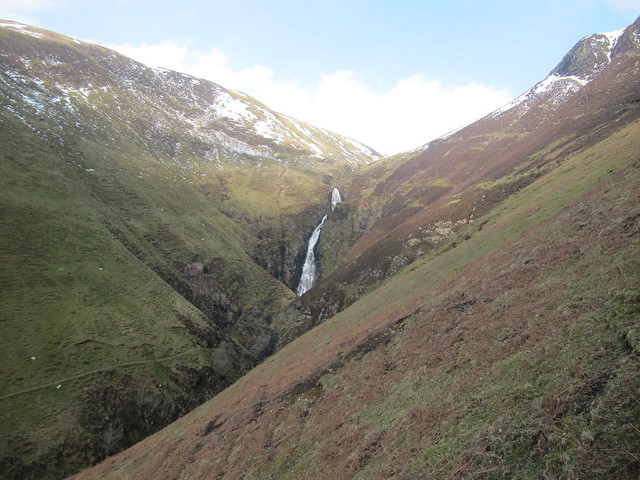 the falls, and snow. With Simon, blooming heather had dominated

On the way up the hill by the falls, I debated whether to go clockwise or anticlockwise (J left it to me to decide). Clockwise meant we’d get the potentially tricky stream crossing out of the way, whereas if feet got wet (haha, more about that to come), anticlockwise would mean only a short walk back to dry footwear. Once we reached the top of the falls, we moved down to the water to see if we could find a good crossing spot. We did, and both managed it without incident, and dry boots, for the moment. We were soon on our way up White Coomb. 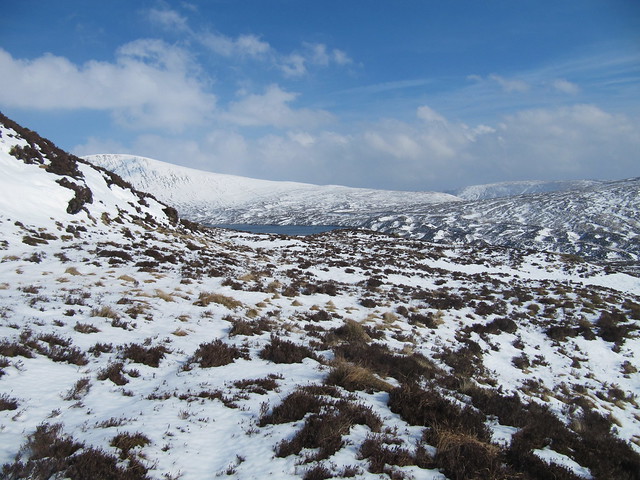 first glimpse of Loch Skeen on the way up White Coomb

It wasn’t long until we were into slushy snow; fairly deep in spots where it had drifted. We were two hours to the summit, where we took a little break, and tried to figure out where our next target (Cape Law) was. The route that J had planned also took in Garelet Dod, Erie Hill, and Molls Cleuch Dod before descending back down to Loch Skeen from Lochcraig Head. 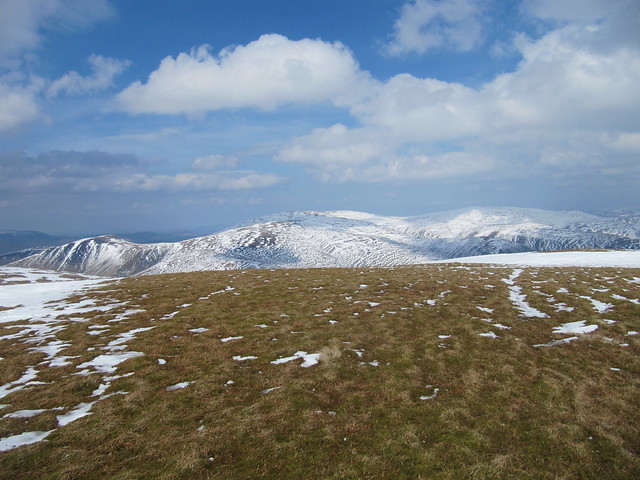 from the top of WC. Maybe Hart Fell? not sure...

We made our (slow) way toward the fence junction at Firthhope Rig, where we found a man we’d seen earlier huddled cosily down in a little den formed mostly by the drifted snow against the wall/fence. We chatted with him for a few minutes; he was out checking fences, digging out those that had been buried by the snow. We couldn’t quite figure out why this needed to be done—perhaps he just wanted an excuse to spend the day in the hills.

We’d not gone far beyond that point when J admitted that his original plan might be a tad too ambitious for the conditions. The deep snow slowed our progress considerably, and we had a great deal of descent and reascent in front of us. As much as I wanted to check out the place called Rotten Bottom to see whether and in what way its name was warranted, I agreed. (Truth be told, it was one of those “thank god” moments that he’d realized himself what I’d already been thinking for a while, but didn't want to say.)

So we headed back up the hill in the general direction of Molls Cleuch Dod. This would be a new Donald for me, as Simon and I had given it a miss. The tiring trudge through the deep snow in a rather relentless wind continued. Jimmy broke trail the entire way, as I plodded and lurched along behind, into uneven footprints that ranged from sinking only a few inches on top of consolidated snow, to knee/thigh deep soft slushy snow, to water-filled holes, to short sections of tufted grass with very little snow. There was no shelter, so we simply carried on. In a slight dip just below the summit of MCD, we cleared out some snow along the wall so we could hunker down out of the wind to have some food. 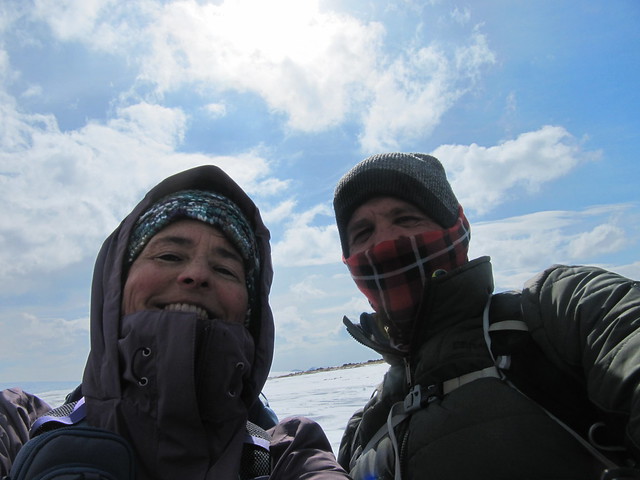 There wasn’t much to hang around for at the broad, unimpressive summit, so we made our way back the way we came before beginning the descent to Talla Nick, from which we’d make the final onto Lochcraig Head. It wasn’t that much ascent (~120m), but it was steep enough, and the deep snow made it arduous. The smugness of having managed the burn crossing with dry feet was but a distant memory. 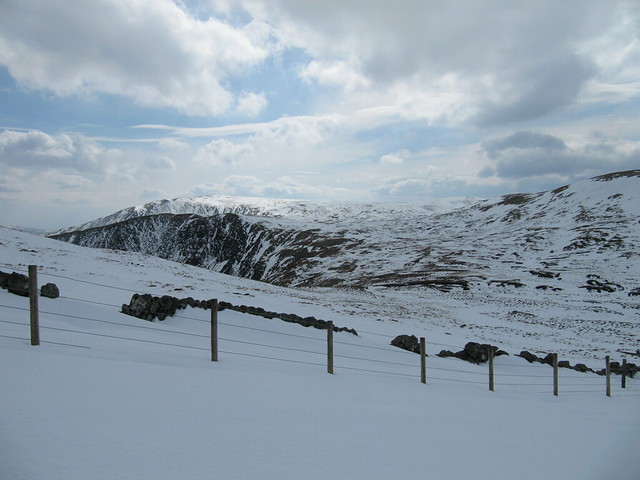 the descent to Talla Nick 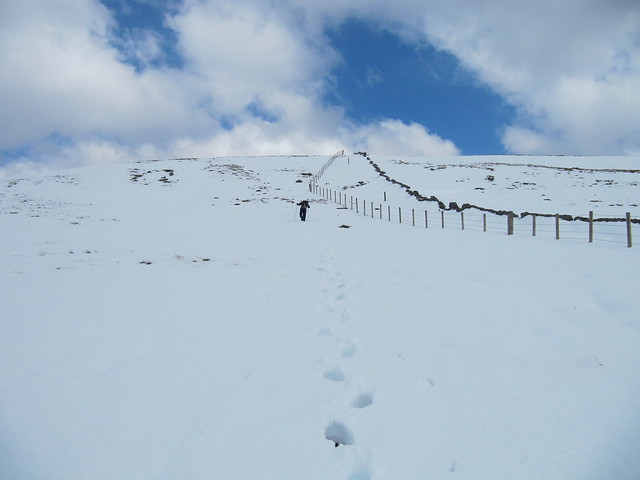 breaking trail on the way up to Lochcraig Head 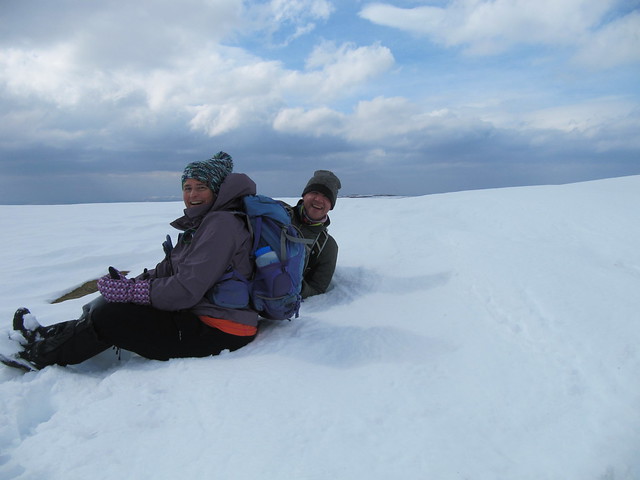 the summit -- the actual summit -- of Lochcraig Head

From this summit, we made our way to the large cairn looking down onto Loch Skeen – actually, when Simon and I did this route, we missed the summit cairn for thinking that the one perched above the loch was the top. Oops. For me, this has now been corrected, and I can in good conscience keep the hill marked as “done.” (Yeah, I wasn’t really losing any sleep over it.)

We made our way down to the loch, thinking the hard work was finished, but near the water, the ground undulated up and down mercilessly and pathlessly, across soggy ground and peat hags aplenty. It was exhausting. We finally reached the well-made path at the loch outlet, and made our way back down to the carpark, boots sloshing by now, not from the burn crossing, but by paddling through bogs and deep snow all day. Ah, bliss, dry socks! 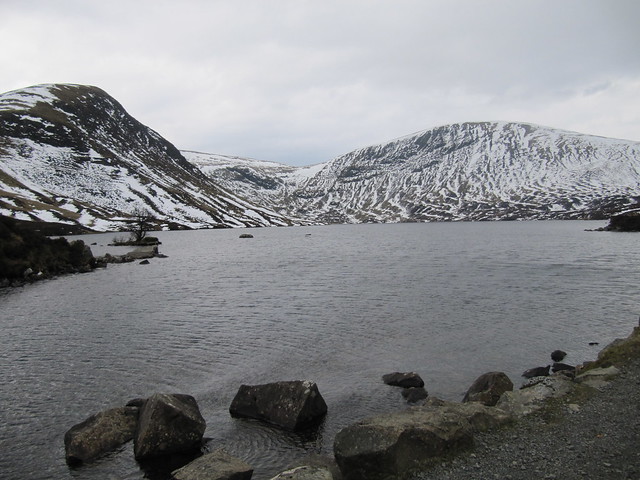 It was a really nice day out in spite of the difficulties, and I feel like I’ve managed to have the “at least one good winter/snow walk” that’s usually one of my casual goals for the season.