ossian circuit.gpx Open full screen  NB: Walkhighlands is not responsible for the accuracy of gpx files in users posts

We've not been up a Munro since last August and I had a couple of days off work at last so we'd to find a nice way to use them which was not going to be a major epic but still turn some of those red balloons blue. We decided on a train adventure to Corrour and to climb the three Munros either side of Loch Ossian with a camp thrown in.
We drove up from Shish's house in the borders (after an evening of cuddling her new grandbaby) in good time for lunch at the Real Food Café before the 2.30 train to Corrour. It was a very exciting train journey up through Rannoch Moor with extensive views in every direction. We set off up Beinn na Lap at about 3.30pm, first stashing the crampons and axes as it did not look like we would need them.
Sunday was a gorgeous day with wonderful views. We followed the usual route up the shoulder of Beinn na Lap mostly in our shirtsleeves and there was no wind. We almost thought we had midges! setting off from the station looking downLoch Ossian towards bealach Dubh Looking west, Mamores on the left, Ben Nevis and her neighbours on the right Looking towards tomorrow's target with the Lawers hills in the background Bidean in the middle and the Aonach Eagach to its right There's a lochan on the top. Looking towards Chno Dearg near the summit, looking towards Ben Neis and here's Rudolph on the summit long shadow at the top from the top looking roughly south to Leum Uilleim and beyond

By the time we reached the summit the shadows were lengthening and it was starting to feel a bit chilly. We took the shoulder of Creag an Fhathaich down to the East. There were some patches of hard snow but no real problems and we didn't regret leaving the spikes behind. 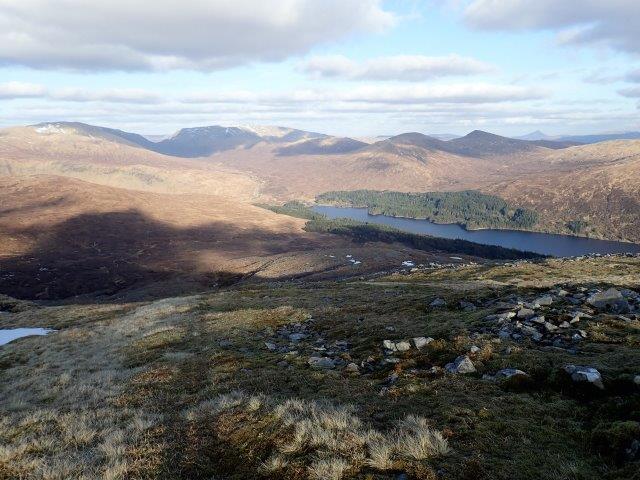 We were aware from our prior reading that there was a path through the forest at some point but it is not marked on either OS map and we were not quite certain which burn it followed. But at the forest edge we came to Allt Loch na Lap in a little gorge. We could see a bridge a small way upstream and a gate a small way downstream on our side. The bridge looked rickety so we decided to try for the gate. There was no fence, so the gate posed no problems(!) but it soon became apparent that the path was on the EAST side of the gorge. Fortunately we came to a place where it was possible to cross the burn and we soon reached the track on the north side of Loch Ossian. We heard woodpeckers drumming in the trees at Ossian Lodge. After crossing the River Ossian by a new track and bridge not marked on the map, we soon found a good sheltered spot to camp at about the 390m contour where we ate our tea in the dusk and went to bed. It got cold very quickly and by the time we got into bed the stars were out and there was already frost on the tent. It was a cold night; I was toasty warm in my sleeping bag apart from my face, which I kept warm by putting my gloved hands over my cheeks and slept remarkably well.
In the morning the frost was gone but so was the sunshine! The forecast was for 30% chance of cloud free Munros and the weather deteriorating as the day went on. (As it turned out the cloud base remained pretty high most of the day and we didn't get any serious rain until we were on the home stretch). Packing up and setting off, we headed straight up the side of Meall Nathrach Mor. To be quite honest a quick pop up Roseberry Topping once or twice a week (or even no times at all) is not really sufficient to train for Munro climbing, and I found this quite a slog. I'm going to have to pay more attention. However, you put one foot in front of another and keep going, take a lot of photographs, suck some sweets, and eventually you get to the top. Quite a change in the weather today

We actually bypassed the top of Meall Nathrach Mor and Sgor Choinnich and made a pretty straight line to the 802m Bealach nan Sgor. Frozen pond near the bealach with Carn Dearg beyond

Coming up the last bit to the top of Sgor Ghaibhre we suddenly found ourselves in a spot with no wind, so as it was getting towards lunch time we decided to stop for a brew. 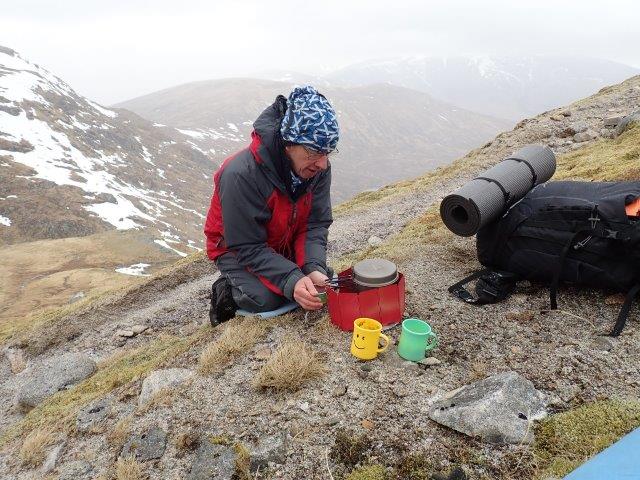 Happy Mugs waiting for the kettle to boil

Having topped up the tanks we reached the summit at about half past twelve. Rudolph on Sgor Ghaibhre, Ben Alder behind. I call this a cloud free munro.

We didn't hang about and set off for the second summit Carn Dearg. This one was in cloud but there's no missing the summit as there is a massive cairn. big cairn but no view

Turning north we followed the ridge for a bit then descended by the shoulder of Meall na Leitire Dhuibhe down to Peter's Rock. Loch Ossian as we come out of the cloud.

From there the track takes you straight back to the railway station but we remembered to pick up the spiky things from their stash on the way past.
The rain was pretty much set in by the time we reached the station but fortunately the restaurant had opened just on Saturday (2 days earlier) so we spent a couple of happy hours there chatting to some other people and having delicious food before catching the 6.30 train back to Tyndrum.

Re: Loch Ossian Circuit with camp

Nice wee route that one with a lovely train journey there and back.I was on Braeriach on Sunday, it was a stunning day

Re: Loch Ossian Circuit with camp

it certainly was GLW, Braeriach must have been fantastic.