One of those days where the promising forecast of sublime weather dictated the need for a run to do the hours of sunshine justice. Having hoped to do the Crianlarich Munros for a few months, it seemed to be the obvious choice, especially with the offer of company on what could amount to be a very long day out. Though Ali and myself were both working on tired sets of legs, the optimism to complete the round was really the key requirement today, and it must be said there was never a moment where that optimism faded enough to resort to a bail out at Beinn Tulaichean.

We started at a comfortable midday, having made the decision to top up on sleep the night before. The weather forecast seemed to only get better as the day went on, and with the worries of sunset being long-gone, there was really no rush. We had 6hrs in mind based on Steve Fallon's website, but realistically hoped things could go even quicker.

We parked up at Inverlochlarig and scoped out the somewhat daunting 1000m climb to Stob Binnein. We told ourselves that once it was over, that would be a third of the climb done, and with that in mind things actually went by very smoothly. Once on top, a stubborn cloud came over with a chilly wind so there would be no hanging about, and instead we pushed on to Ben More. The climb from the saddle was much sharper than expected, and it wasn't a nice time to have burning legs, but again we correctly calculated that it would be about half the climb done for the day, which was a very nice thought. A few snow fields impeded progress slightly but if anything were a nice load off the legs as we nipped back down after the top. 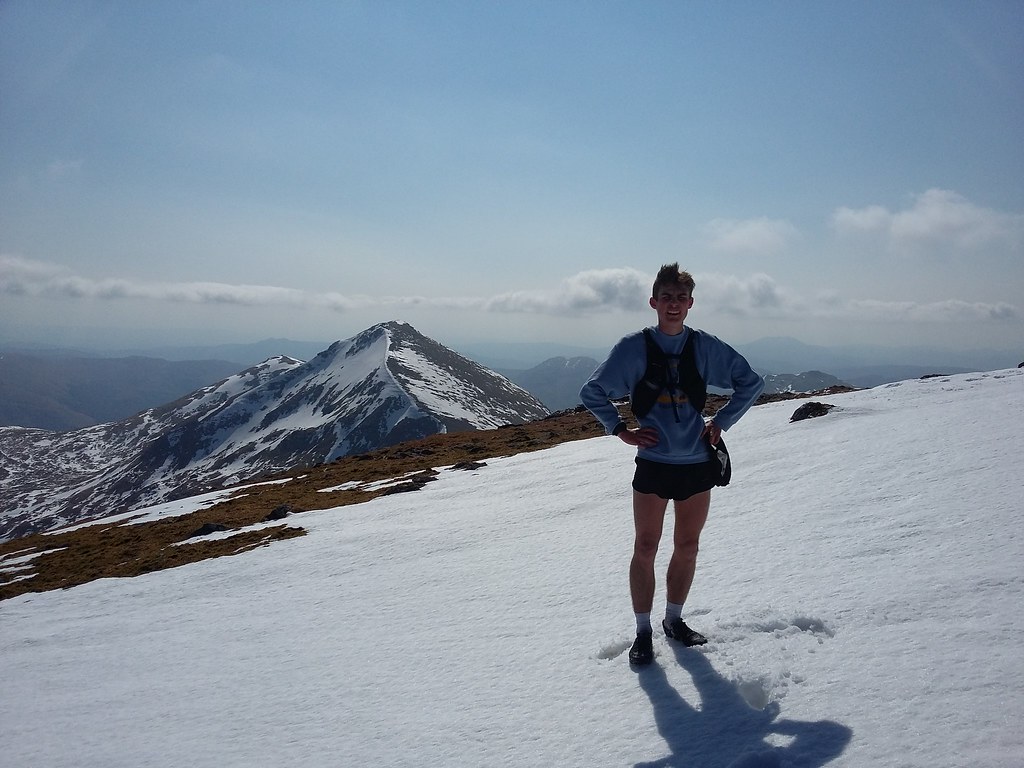 Ali looking sassy, on Ben More with Stob Binnein in the background

It felt good to tick off the ridge but we now faced a gruelling scramble onto the next one. We hadn't heard much of people linking the two up and so instead of looking for any trods, we dropped down keeping as much height as possible and tried to scope out a line up Cruach Ardrain. The hill is very aptly named "Hill of the High Stacks" and is as such, lots of bumpy crags on all sides. 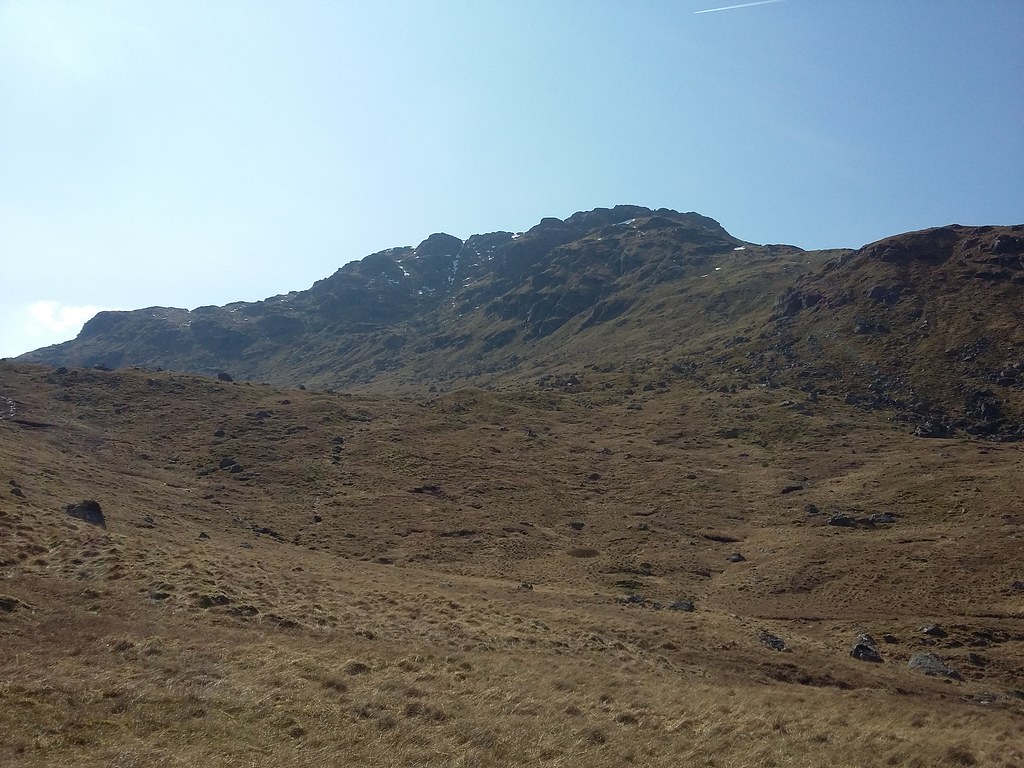 First though we had a bit of fun checking out one of the largest boulders we've ever seen. Definitely worth a look if you're passing by, and a very nice camping spot. 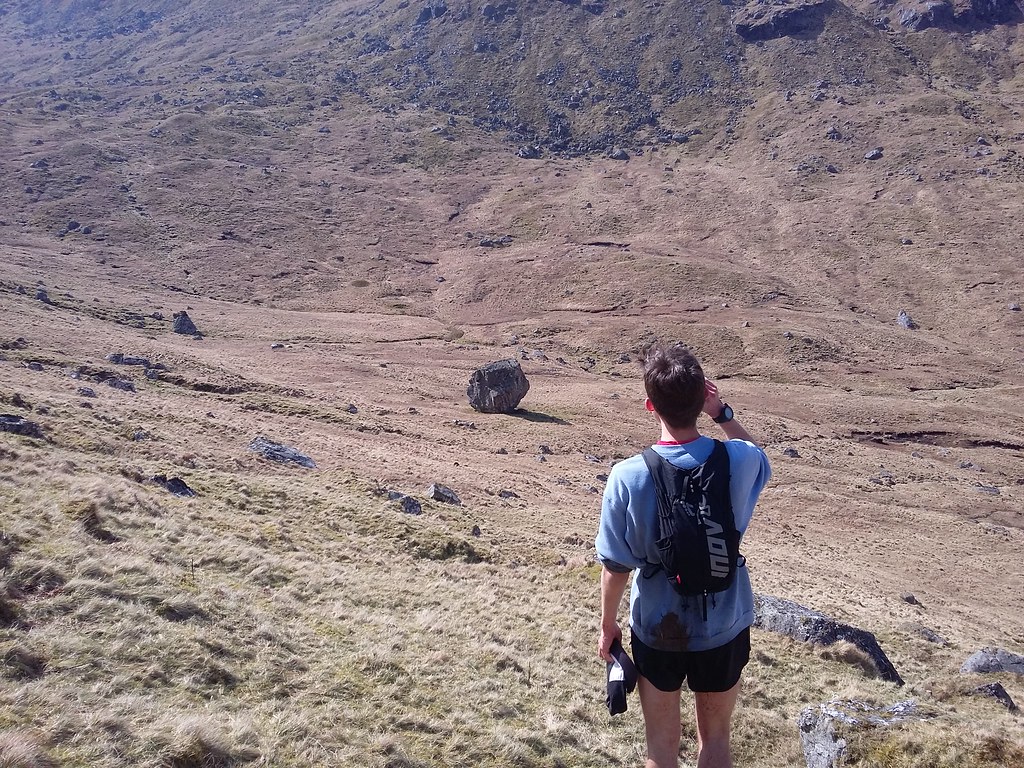 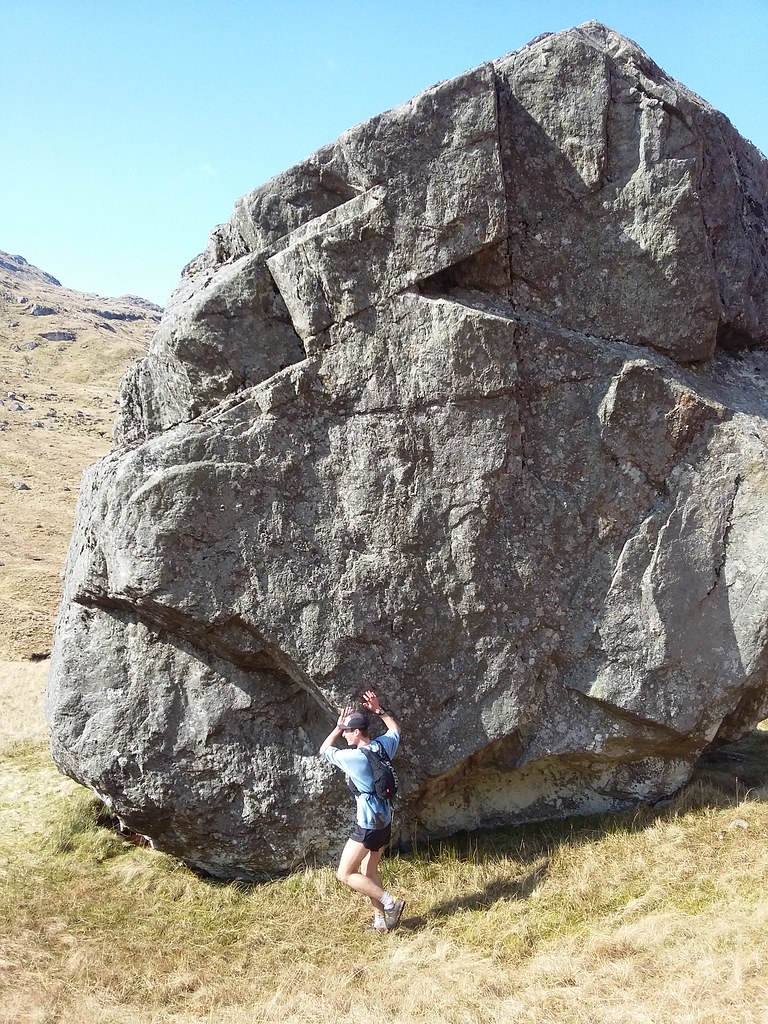 Imagine this rolling off the mountain towards you...

The long, 600m boggy climb up then began but with an adequate level of good conversation, this flew by. The final 200m were rather steep, including a snow field which could have been a little bit dodgy last week, but all very manageable with some cool terrain to keep us entertained too. 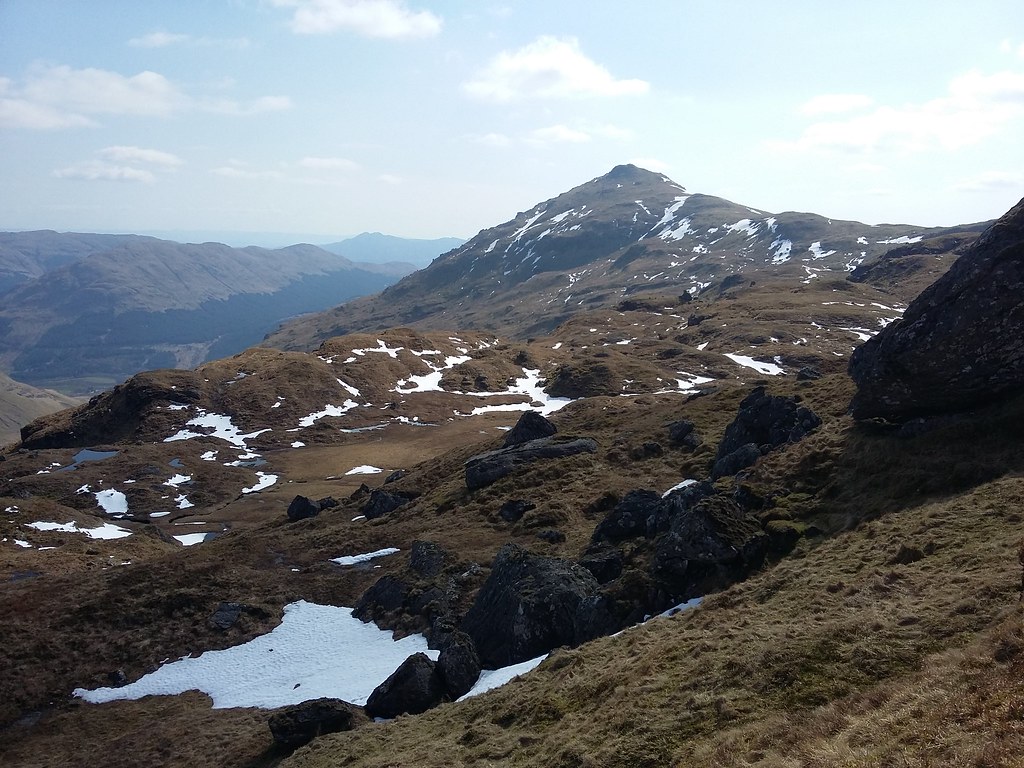 We summited having now bagged almost 2000m climb, with a seemingly small climb up Beinn Tulaichean to look forward to as a sort of recovery. 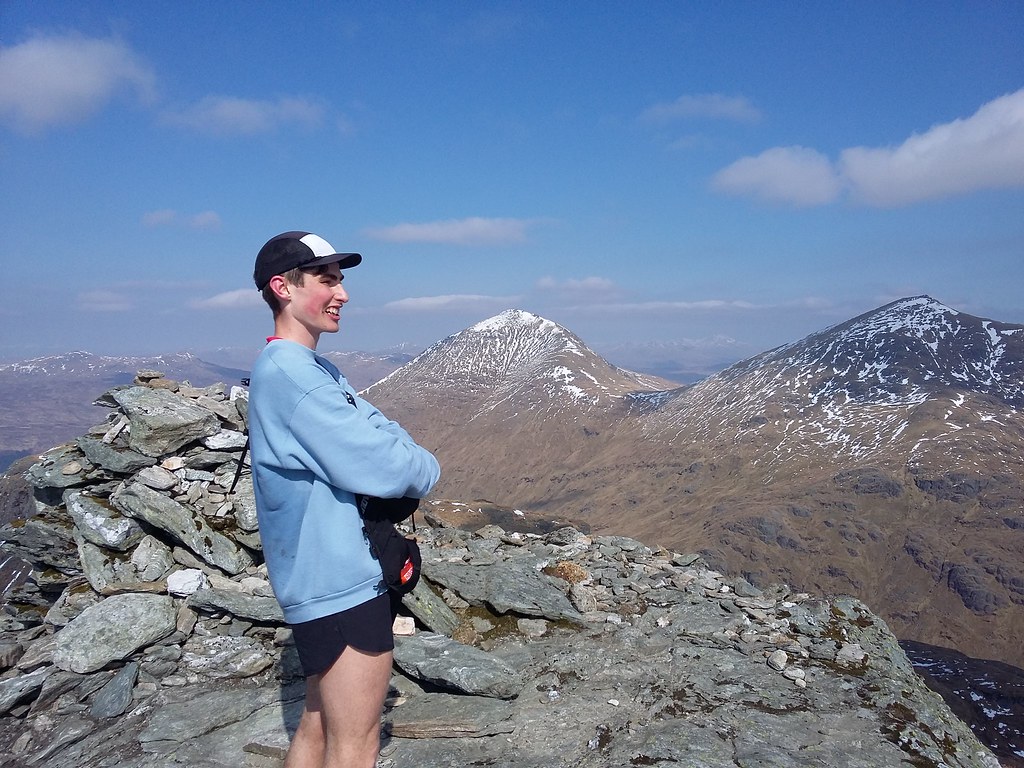 Ali looking back at the previous two Munros, or "Runmos" 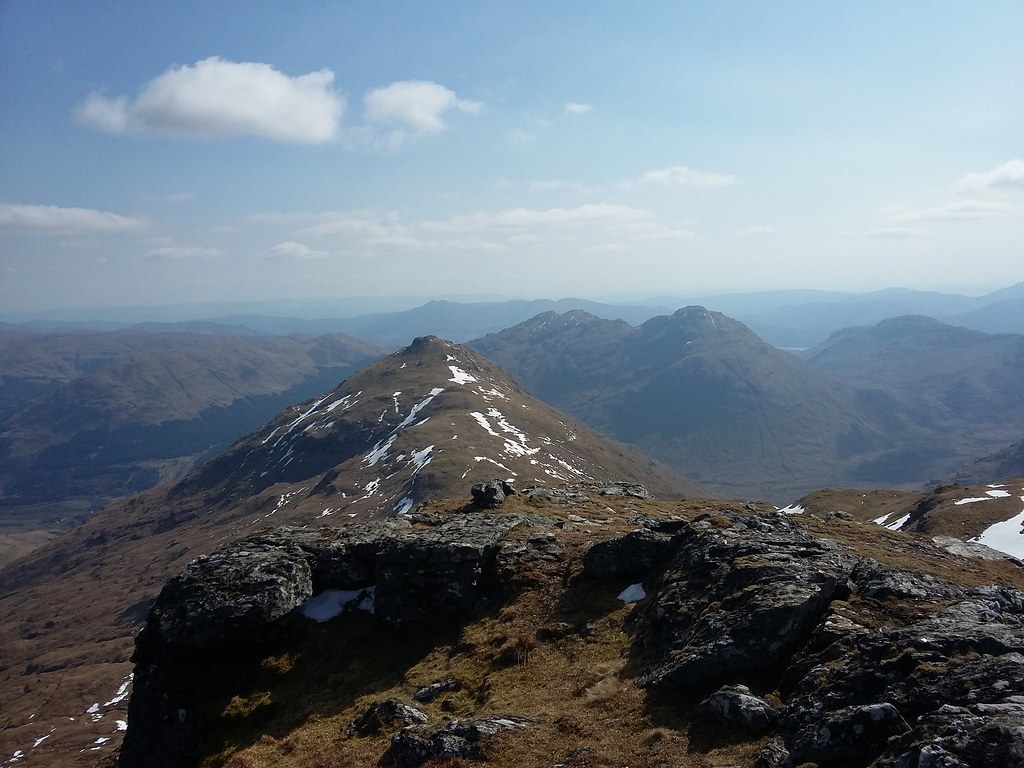 The cheap top to come

We calculated that we were well within a 6hr schedule and both of us were feeling good and eating/drinking well. We had a good sit down picnic ("lunch"= a Belvita bar) on Beinn Tulaichean and scoped out the next climb, up Beinn a'Chroin. 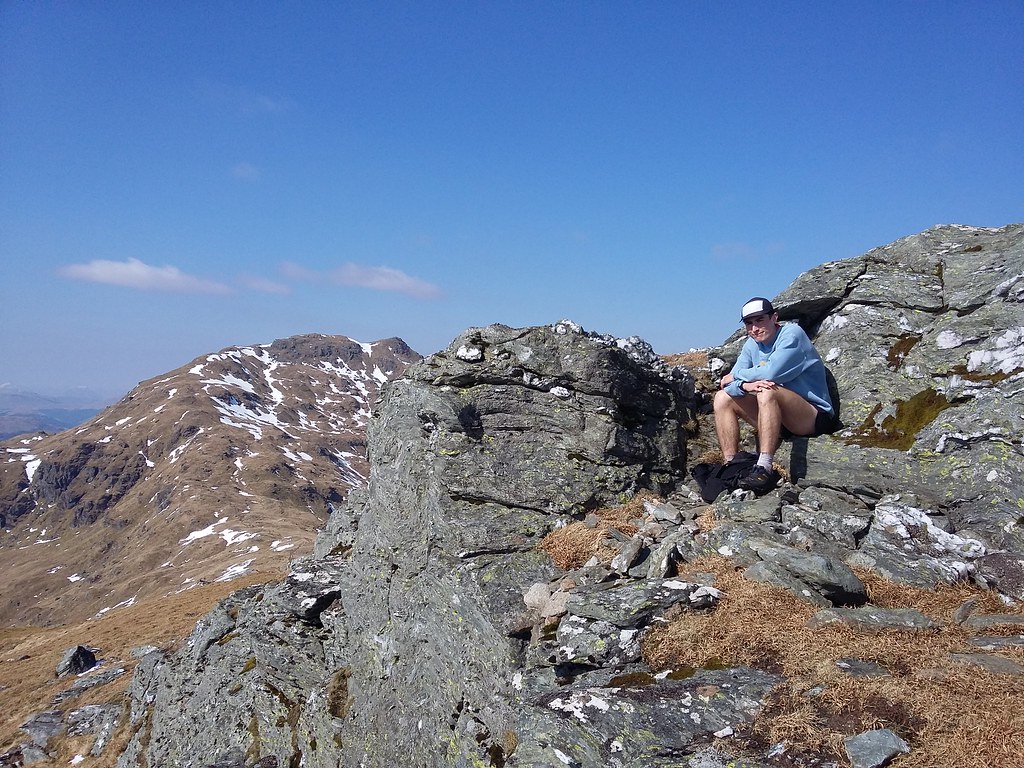 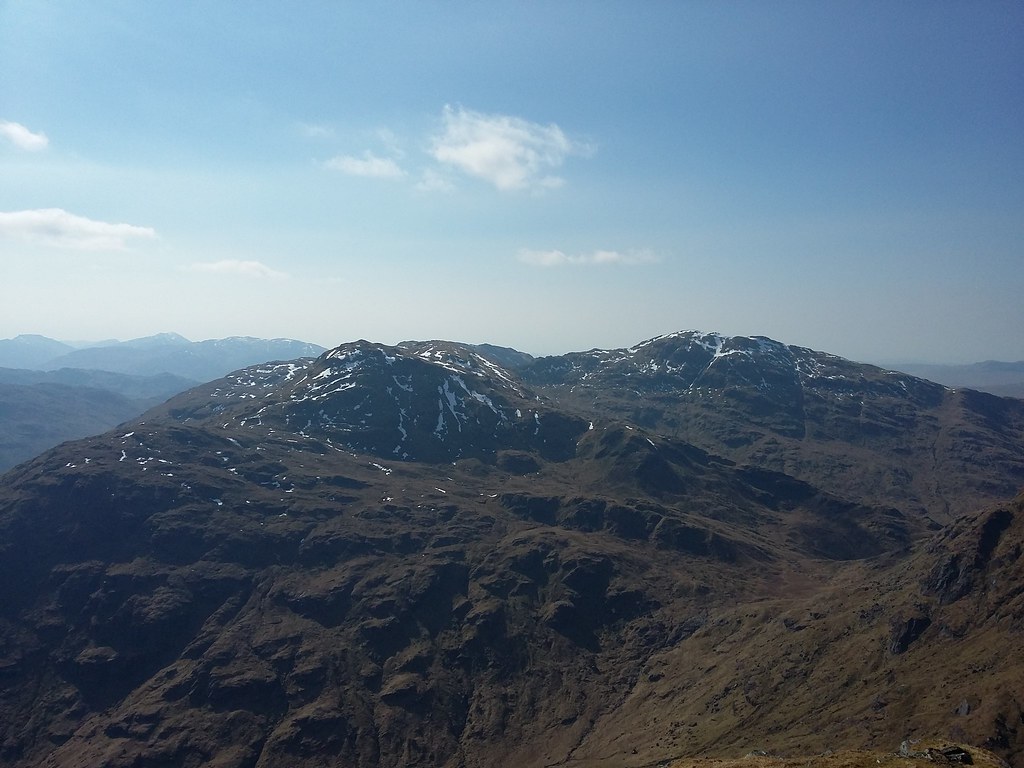 We quickly gathered some more data that would make it seem more manageable: three more climbs; 400m, 200m, 300m, and mostly on paths. Sounds good, so off we went on a bit of a traverse/descent to the col between Beinn Tulaichean and Beinn a'Chroin - "the hill of the sheepfold" (I preferred "hill of danger" in an older book).

The climb featured skirting right of a spur known as "The Convention" - if anyone has any idea why this has its name we would be very keen to know. In any case, it seemed like a far from conventional way to ascend the munro. We joined the path halfway up the hill and enjoyed a nice gradient to the highest of the many tops on Beinn a'Chroin. Once there, we didn't spend long hanging about and once again cut the descent a bit short to the col before An Caisteal - "The Castle". 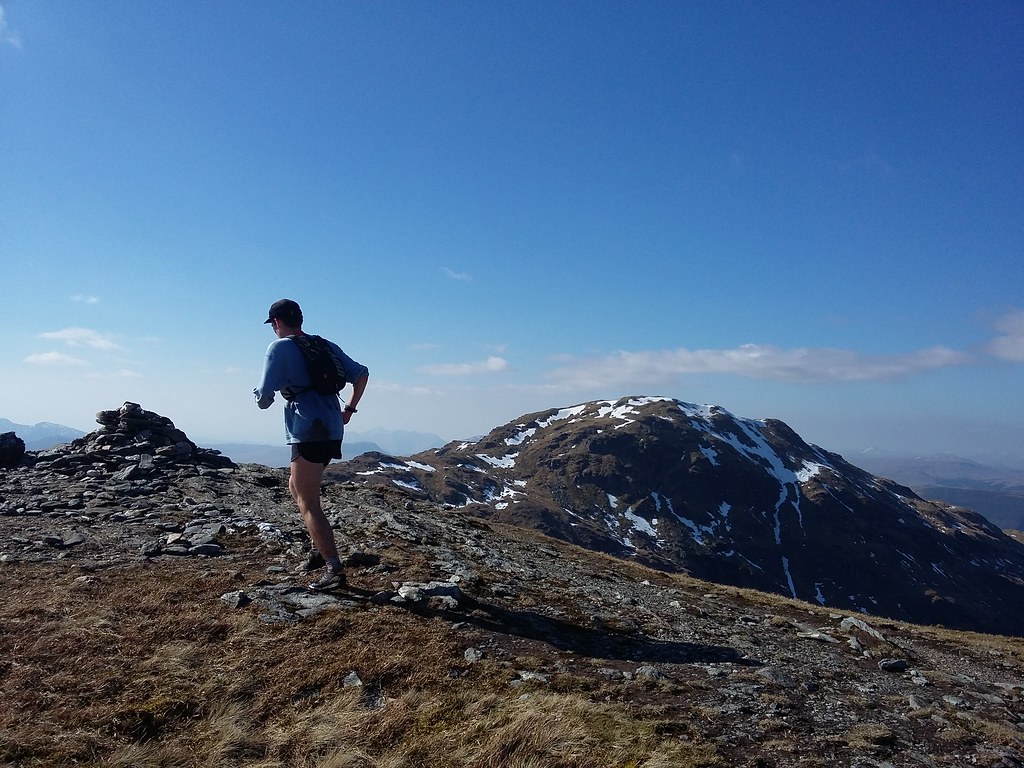 Beinn a'Chroin with An Caisteal in the background - still moving!

The climb up this castle was steep so we trudged away with a new, intriguing topic to take our minds off it. Without the chat I believe it would have been a two munro day! A quick stop once again on top before descending a rather steep way to the final col. 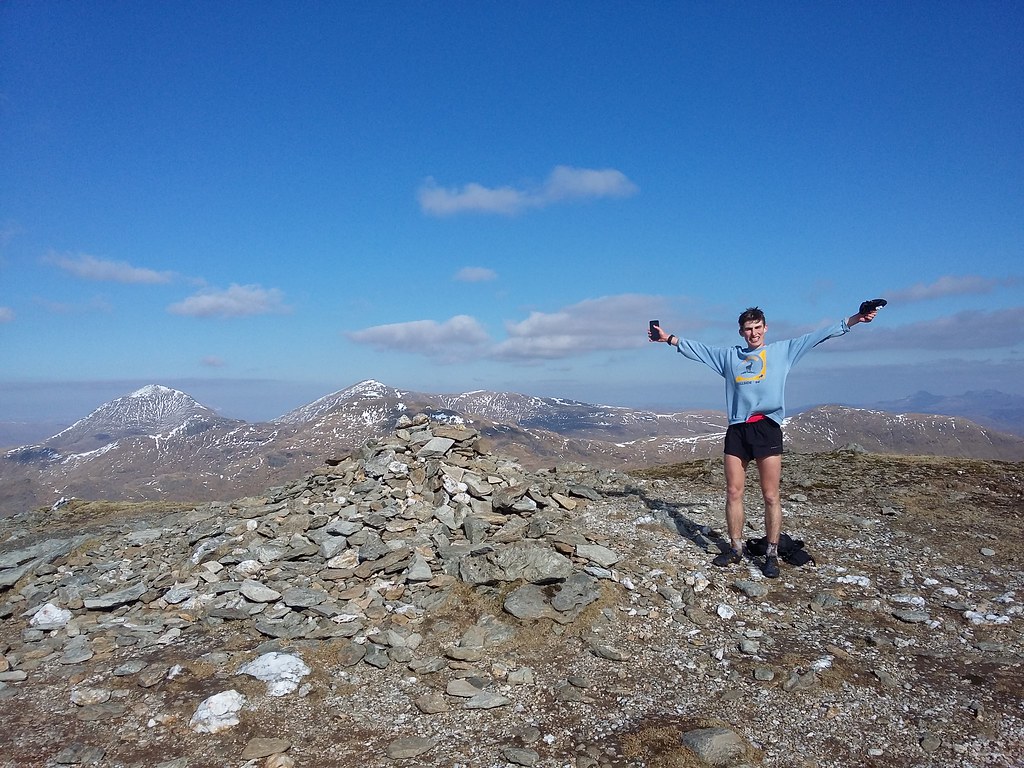 Ali forgetting we had one hill to go

I have to be honest - I don't remember much of this descent. The tiredness was probably beginning to kick in but luckily we stopped for a quick final drink stop before the final climb. 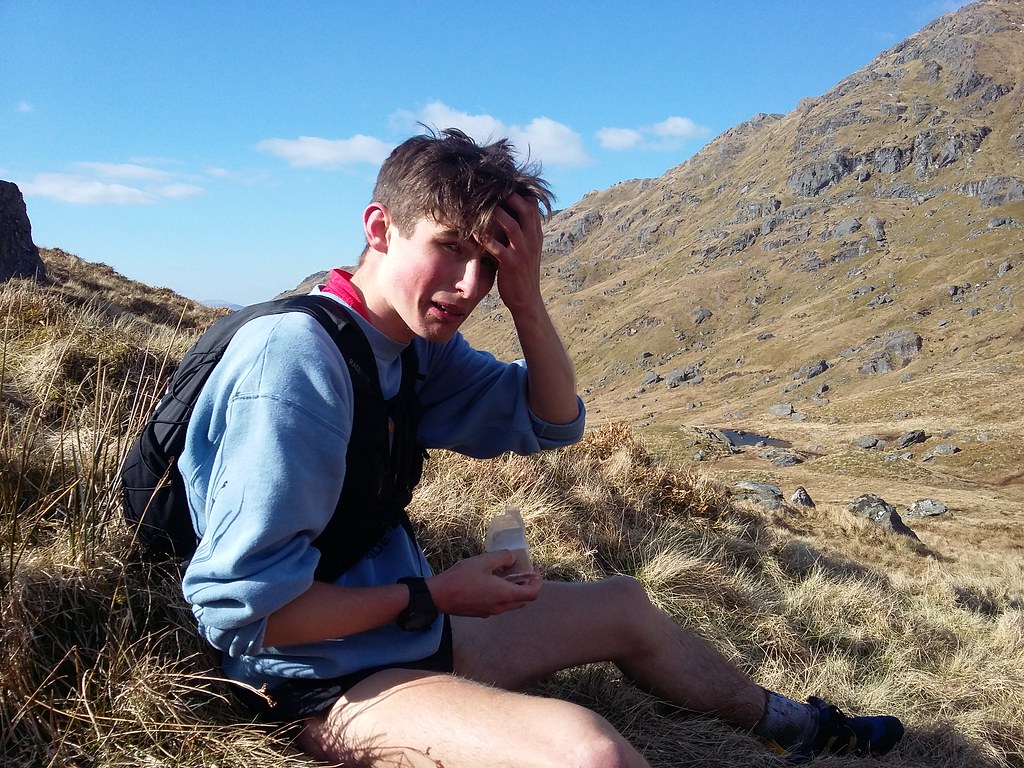 Quick cry before the final climb

"Just Turnhouse Left" we kept asserting as we made slow progress up Beinn Chabhair, the hill of the hawk. Things got quite steep once again but it was actually quite nice this time to use the arms a bit and let the legs chill out. We were up before we knew it, having finished the seven we were ideally aiming for. A very nice feeling indeed, and an equally nice view back of the whole range. 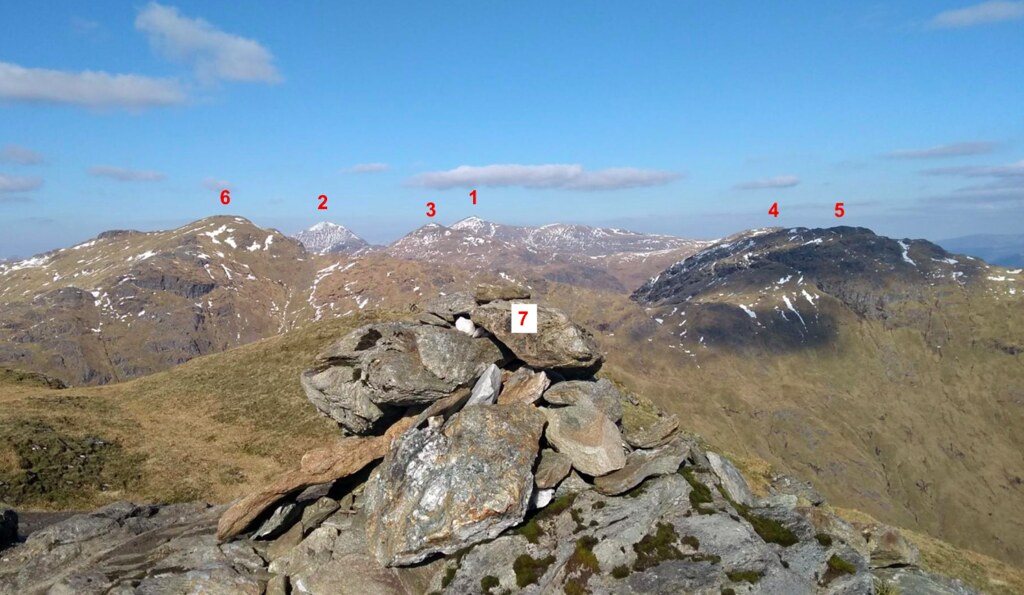 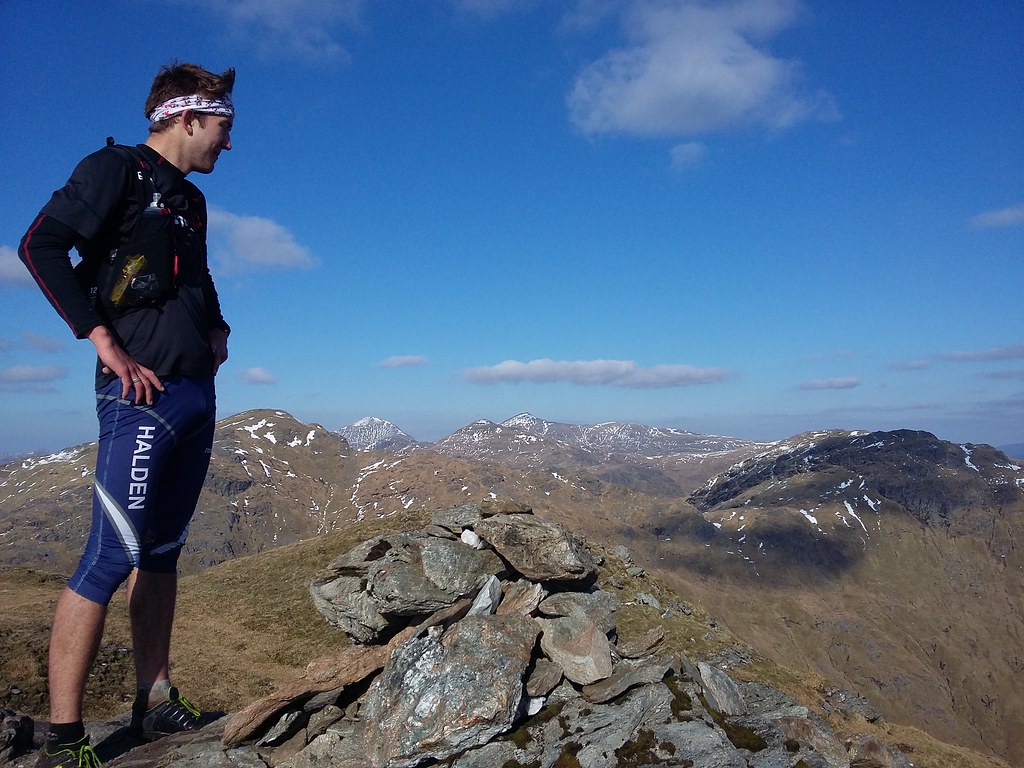 The author and the view

One final picnic stop to load up on some sugar, knowing that we should be back in about an hour. We hit the final descent knowing it could be a bit hairy, and though we got through fine, it was steep as anything - not very obvious on the map..! You can just about see the crags here: 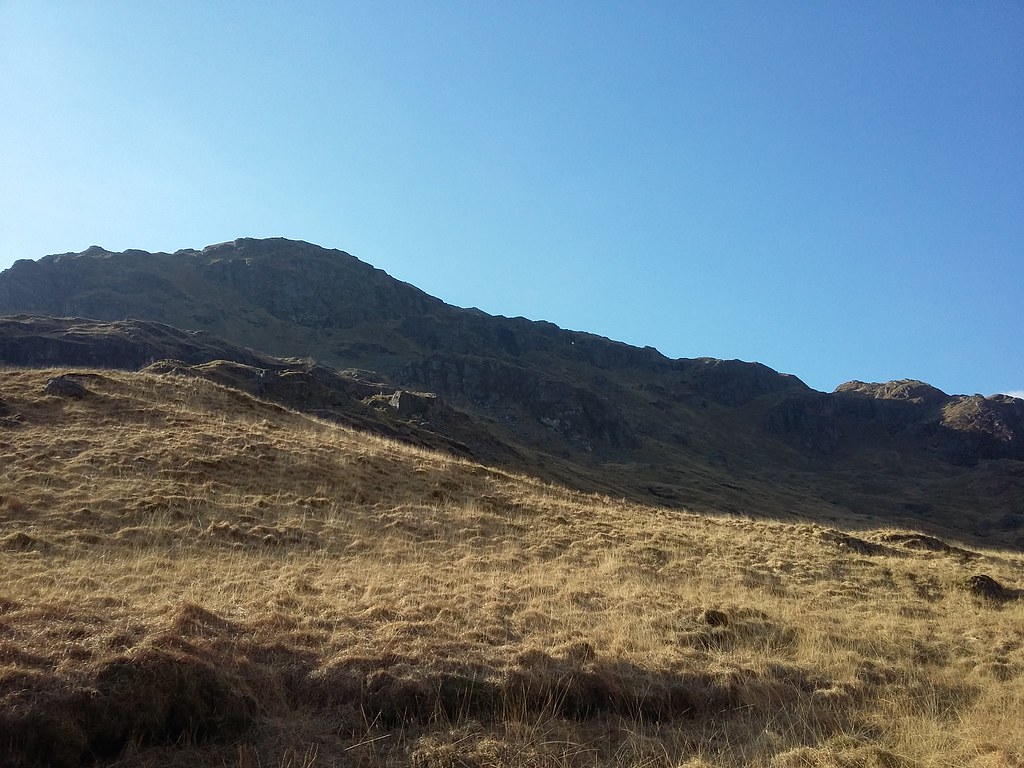 With some trashed, but generally niggle-free legs, we started the trek home. Luckily the track was fairly well-built (once we reached it) and otherwise, a final injection of good chat made it fly by. 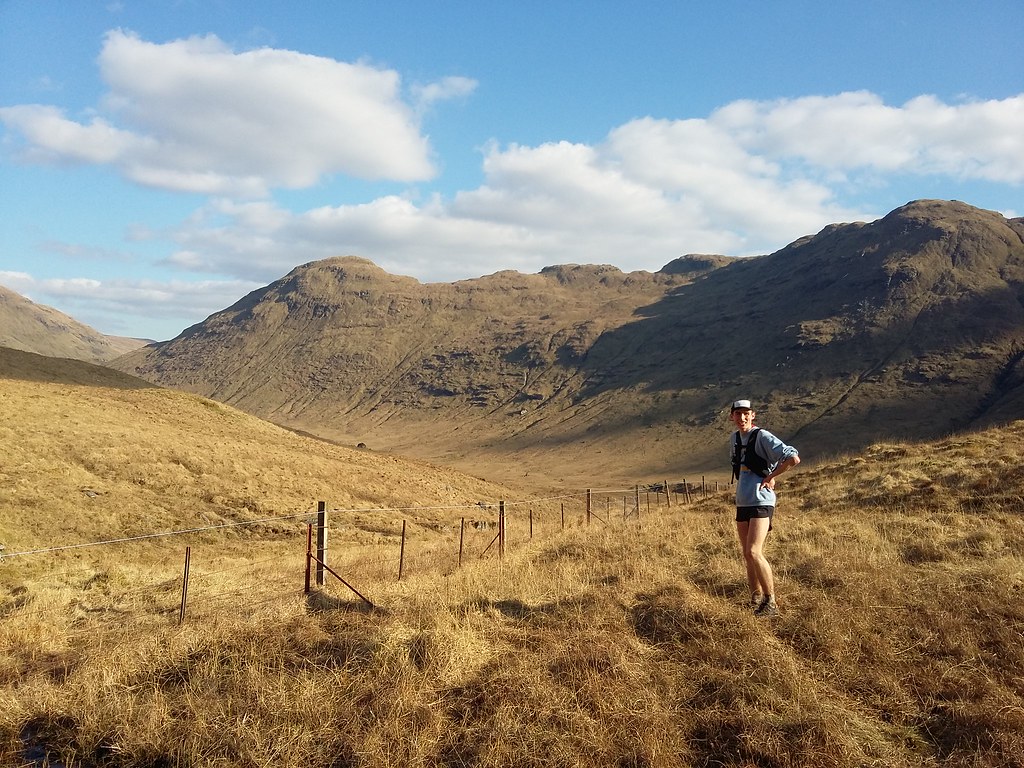 At the start of the journey home. Pristine sunshine and landscape.

Overall a lovely range with some very cool and easy-going terrain - would recommend to anyone looking for a bigger challenge. Attacking from the south also a good idea in our opinion - finishing a good load of the climb in the first hour and having the climbs [generally] decrease in size as the day went on.

Thank you Ali, that was a fine day out.

activity_3546141308_2031nodes.gpx Open full screen  NB: Walkhighlands is not responsible for the accuracy of gpx files in users posts

Nice write up and cheers for a lovely day!

A great round on a great day!