It's spring and it had been over six months since me and my 10 year old grandson Matthew had been out on a hill together and it was time to see if, a) he was still keen to do some hill-walking, and b) I still had it in me to drag my aging bones up some Scottish hills this spring, summer, autumn. I had climbed Benvane a few days earlier so felt reasonably sure there was still some fuel left in the tank, so how about Matthew?

School was off and Matthew was up for it and he was suggesting something like a Corbett or under just so he could find his hill-walking feet and fitness again. And that made sense, as I had just bought him a new pair of boots, and although he pronounced them comfortable and had been wearing them about his home, I had some concern that we could set off on a longer walk and then find they were hurting his feet in some way. So a shorter walk seemed a good idea.

I tried to find a hill not to far away from home, preferably one neither of us had been on before, but I eventually came around to considering Meall nan Tarmachan. Sure, it was a Munro, but one with a high starting point, and one which neither of us had been on, so it ticked the boxes. I had this hill in the back of my mind when the full ridge walk could be done, but was quite happy to do it as a summit walk only with Matthew. We could maybe leave the ridge as an option. The weather for Monday 8th and Tuesday 9th looked good, and on the Friday before, we settled on the Monday. When discussing this with Matthew's mum, it transpired that a colleague of hers at work had Monday off and was also looking to do a hill , and so after a couple of texts, Andy accepted an invitation to join us and he would drive the short distance to my house and accompany me and Matthew on our walk.

We set off around 7.30am and the omens looked good. For the last three days I had been checking the mountain weather sites and the Lawers range had been a constant display of sunny balls☀️☀️☀️😊. On the motorway at Stirling the sun was already breaking through. However our first look at Ben Ledi revealed that a good portion of the hill was still in clag, and on arriving in Killin a fair amount of cloud could be seen on the Lawers range. It was hard to convince myself that today was going to live up to the forecast when the previous day had been so poor. I was going to be seriously miffed if we were going to get yet another walk in the mist with a viewless summit. It was, though, still early in the morning and we were all hopeful it would clear as the morning wore on.

The car park had three cars in it when we entered and another arrived as we readied. We set off around 9am.

Apart from a couple of walks I did with a workmate around 25 years ago, this was the first time I would have adult company in my recent re-engagement with hill-walking. I had either walked alone or with Matthew. Andy, like us, was also relatively new to hillwalking. This walk would nicely include three age ranges! 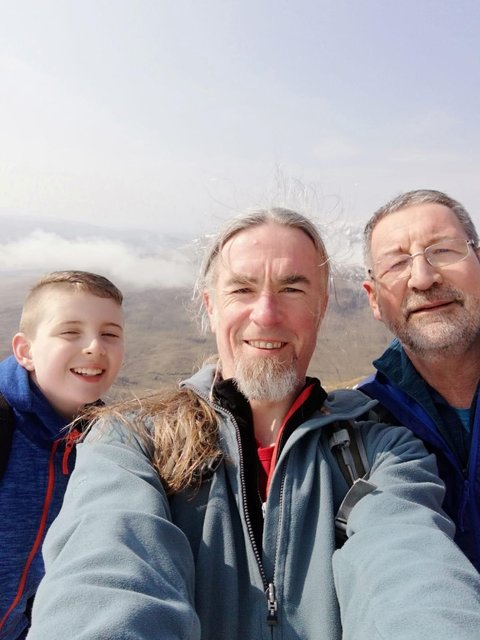 About half an hour in, we spotted our first patches of blue sky above us, and I began to feel more confident the weather predictions were correct.

We plodded on. No real navigation is required and my WH notes stayed mainly in my rucksack. Half an hour later and we were level with our first snow patches and soon, in places, the snow filled in the path. We were not rushing, and frequently stopped to take in the views around us.

I'm not sure if what we were seeing was technically an "inversion", but there was some impressive views to the south, with the summits of Ben More, Stob Binnein and Ben Vorlich etc, sticking their heads up above the clouds.

And to the east Beinn Ghlas and Meall Corranaich despite being just the other side of the lochan below, came and went in visibility.

Eventually a kind of double humped false summit came into view, the second of which had a cairn, and from here the final slog up to the summit could be planned. 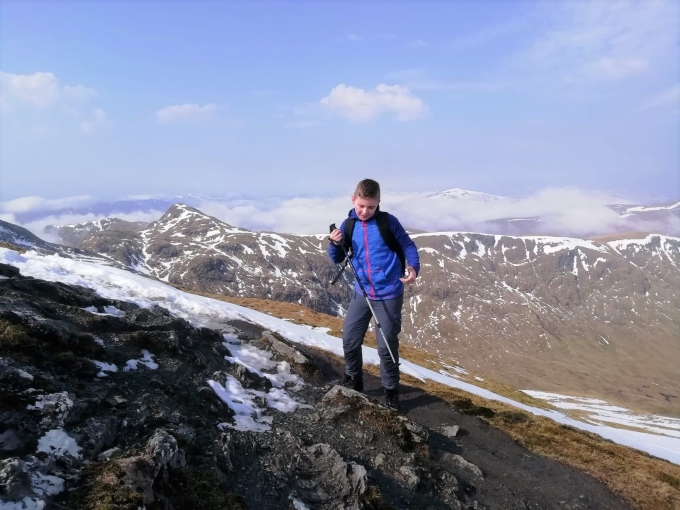 Matthew in the sun.

However, the most obvious coire was mostly filled with snow, so we three fair weather hillwalkers were going to have to plough up through the snow or skip up the edges of the coire. 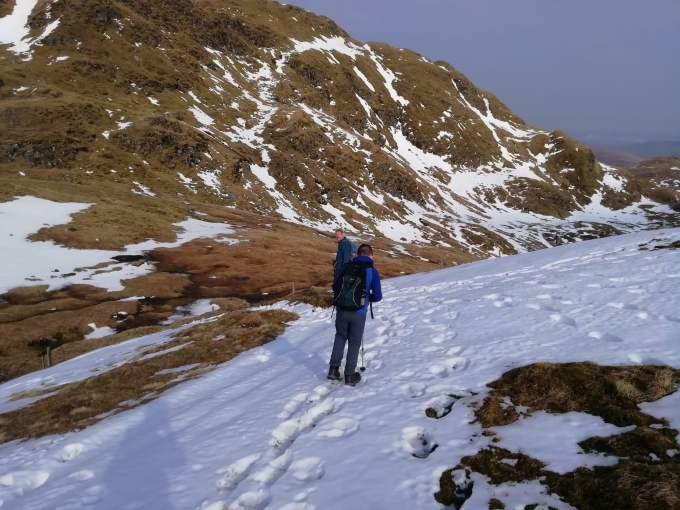 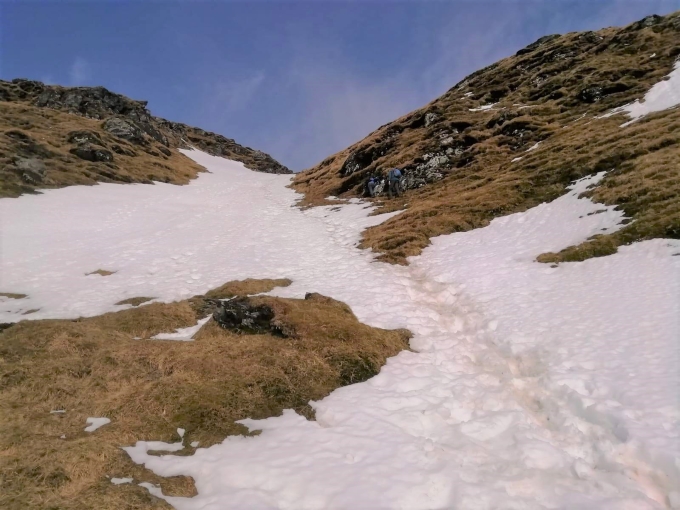 Pics were taken, views were observed and then it was time for munchies.

This cloud look like a snow capped mountain rising from the clouds.

The cairn on MnT is quite small so we were almost lying prone to shelter from the wind, eating and trying to stop wrappers blowing away! Now a decision had to be made. The ridge beckoned and I wouldn't have minded ploughing on, but we mutually decided that this would be fine for today. It was a decent effort. To put it in context, if I pick up Matthew from his parents to take him to school, he asks me to drive straight to the school, rather than park at my house and walk the 5mins it takes to get there. Also, any request to put down his tablet and go to the park for a walk is usually greeted by a major strop. So I'm just surprised and happy that he hillwalks at all.

We started the decent in ever improving weather and visibility. Took a picture of Matthew and Andy under the Tarmachan RIdge.

We kept stopping to look at the views, and I took mental pictures of my surroundings so that I could revisit them when I was sitting in my home in the evening. 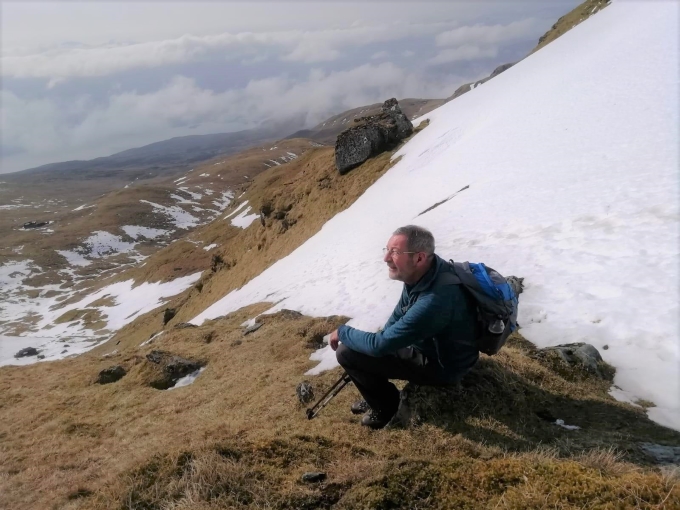 Matthew took a pic of me and Andy. Now, I'm pretty tall (6ft 2in), and it's not often I'm made to look small in a picture. Or else the dreaded old age shrinking has begun 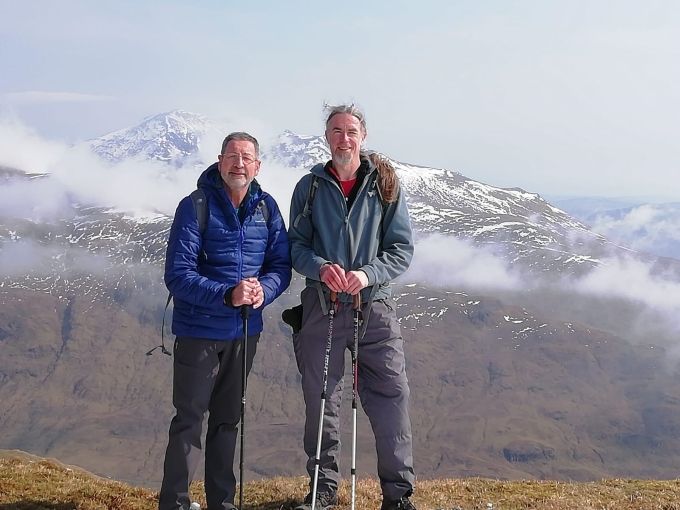 Meanwhile, Andy was discovering that Matthew was NOT the hillwalking companion you would choose if you enjoy silence and peace to process your inner thoughts. He talks constantly!! Sometimes five, ten minutes without the need for input by anyone else. What was more remarkable was that he did this without mentioning his FAVOURITE topic of conversation, his beloved Arsenal. He had been warned by his Mum that Andy wasn't a football fan, so he wasn't to go on and on about football. What did take a hammering was books, film and music, especially his obsession at the moment, Queen and his favourite band member, no not Freddie, but bassist John Deacon! (Don't ask me???)

With several small stops for drinks and snacks and pics, we made our way back to the, by now, busy, sunny carpark.

Nearly back at the carpark.

. Once there, I took a picture of today's hill.

It had been a good walk in a pretty casual 5hrs and both Matthew and I had enjoyed Andy's company. As usual, Matthew fell asleep on the way home, and on arrival, his waiting Gran gave me a row when seeing that his face was slightly burned by the sun. Oops!

I'll still do some walks on my own, but here's hoping Matthew and I have some further adventures this year.
PS. Matthew's feet were fine. Boots a success!

You can't beat a sunny spring day in the Scottish hills. Looks like you've created a monster though - not only is the wee guy dragging you up hills, he's now doing it to random members of the public!

Hope you have a happy season ahead and maybe our paths will cross again somewhere this summer.

Oops! My fault. I should have pointed out that Andy was known to both of us beforehand. If our paths do cross I'm sure you'll hear Matthew before you see him