Munro-3-Meall-nan-Tarmachan-31st-March-2019-12-26-26.gpx Open full screen  NB: Walkhighlands is not responsible for the accuracy of gpx files in users posts
Having had a couple of walks the in the two days before, this was the final full day of our escape from spreadsheets and commuting. The clocks had gone forward and we’d overslept* so the plans we’d decided on went flying out the window like a cat when it hears the vacuum cleaner start. (* I’d said to the lads don’t wake me before 8, I ended up waking them at 9.30!)

Ben Lui and at least one more Munro near it had been the plan as we wanted to see a bit of snow but by the time we’d gollopped back some honey and banana-laden porridge and were ready to leave we only had a realistic chance of seven hours daylight and that walk from Tyndrum to Ben Lui looks a bit long and boggy if you’re pushed for time. As such and in reference to the title, we did some research and decided on a bit of a drive east and settled on the somewhat isolated Meall nan Tarmachan, perfect for a leg stretch and when you’re short of time. This is the happy part. The weather was gloriously clear which makes it hard to drive as you give in to looking at the scenery and counting Munros you would one day ascend or the Falls of Dochart in Killin, that stretch of water is incredible. We had a quick look at and a walk across the dam which contains Lochan na Láirge (it seemed to be very low for this time of year) and started the main walk at 12.30. Initially this is a straightforward chug up a well cut path with the summit almost continuously in view, something that is a rare pleasantry after years of staring up at false summits. It also means the aim is never diminished by having to gauge where you are on the map relative to the summit which often belies the effort needed to finish but that said, the start of this walk is around 480m up when you park so you aren’t making a huge ascent relative to other walks (this was part of the appeal for today as we were flagging from being lards**). 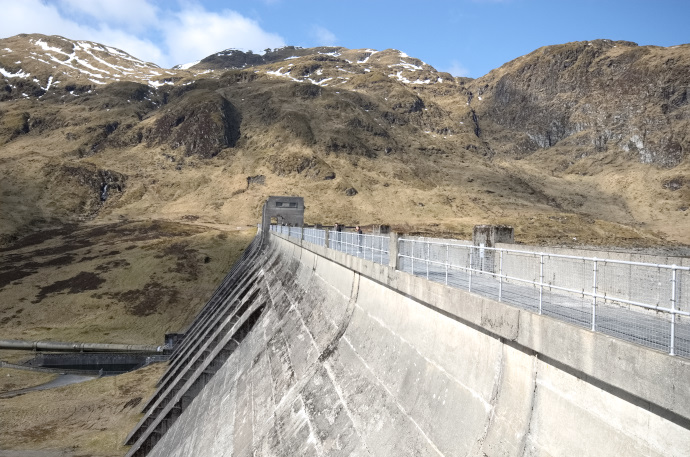 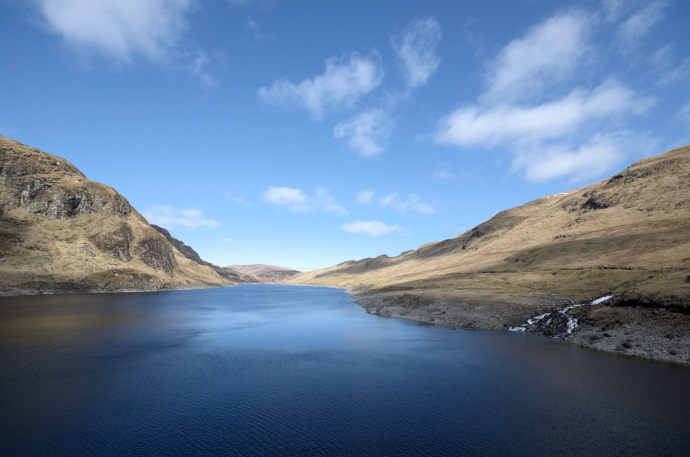 Most of the lower slopes were grassy and quite wet

We were stopping to catch breath (** being lards) and to look up quite a bit to the path to the top. The final part of the route up was clearly covered in deep snow looking at how long people ahead of us were taking, but after an hour or so of walking had reached the col before the final ascent that traverses the east face and takes you due north. At the top of the un-named subsidiary of 923m we began discussing the route up and at this point were clearly not unanimous about using crampons and axes. I’m typically late to the party in putting mine on as I’m confident on my feet in snow so the ascent looked fine to me but the lads weren’t so keen. Daftly we’d left our gear in the house so we had a choice of 1) retreat or 2) forward but with no gear. Having no gear was doubly frustrating given we’d lugged it around on the previous two days but without need and now we could have used it we didn’t have it. LESSON LEARNED – ALWAYS TAKE CRAMPONS AND AXES IN WINTER! This was the slightly unhappy part. 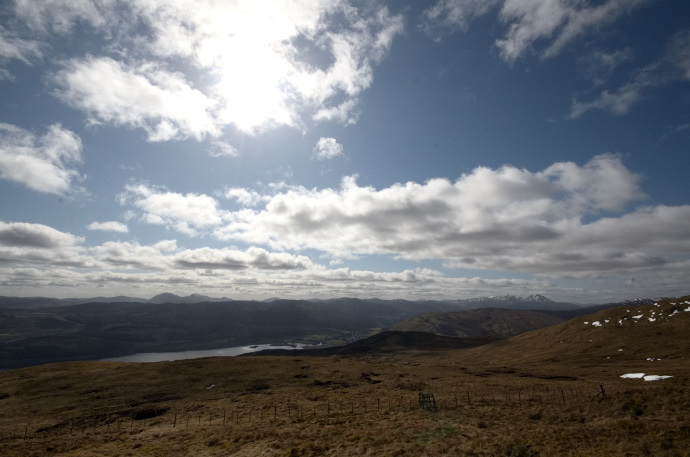 The top of Loch Tay

We decided on a closer look at the snow and at the col we stopped and spoke to a lady and gentleman of advanced years that had just come down the path we were looking at who said it was really soft. They hadn’t used crampons so my mind was set and only when we got to the bottom of the snow were the lads a bit more at ease. The snow was indeed soft and a lot of steps had been cut. With me being the lardiest of the three lards (we’re not that lardy really, just some Christmas excess from 2017 and 2018 in evidence) and more confident I stayed at the back in case of someone else slipping whereas if I’d slipped from the front it would have been snowy-hill people-skittles with no one winning!

It was a welcome change to be on snow and a change in the type of muscular effort meant we really enjoyed it. The first 50-60m was pretty steep with good steps having been cut by a lot of feet but it eased off after that while still in shady snow. Around 20m vertically from the top the snow became absent from the path and less than 5m vertically from the top the view opens up to one of the best views any of us had ever seen, made better by not being able to see any of it on the ascent from the car park. We had a perfect set of conditions to sit back and feast our eyes on that view. Photos never give the same experience so we sat at the top with some mucky pasties and some nuts for almost an hour and absorbed it. With three layers on it was warm in the sun so we were in no rush. We were also surprised at how quickly we’d begun to recognise the mountains as so many of them are entirely new to us, it must be all that staring at maps and WH mountain profiles listlessly hoping for the next trip to arrive. Ben Lawers to the east looks like a terrific place to climb to and with the views to Ben Nevis and the Mamores like ‘little’ pawns in front of it, Ben Lui to the west and Ben More further south we were delighted to have come this way, one of the best effects of oversleeping we could have had. Just thinking about it now is tremendous. I can’t wait for my children to be able to appreciate these things and enjoy them with me. I hope they do! Close up on Ben Nevis 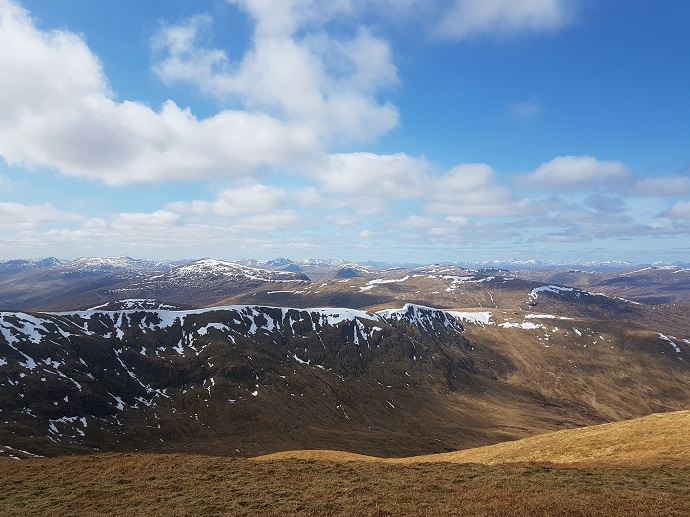 Looking over Glen Lyon towards Glencoe 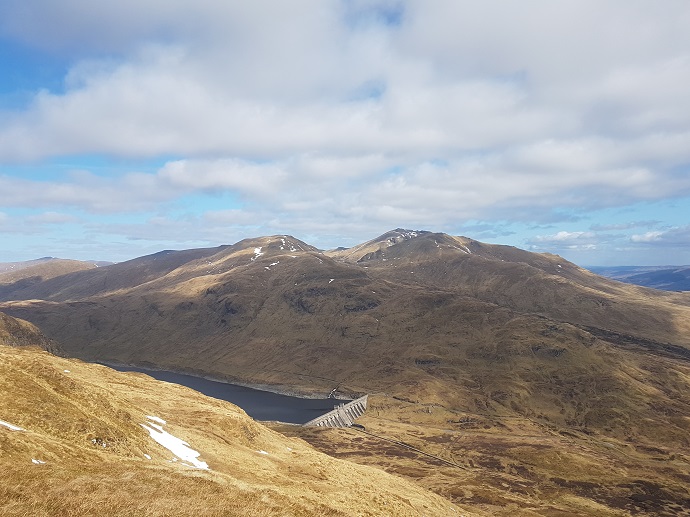 The western portion of the Ben Lawers group

Having not heard of Meall nan Tarmachan fewer than six hours before, it had become one of each of our favourite places we had ever been. Effort + view + pastie + good weather = rewarding. The long way down into Glen Lyon was buttressed by snowy and corniced ridgelines and with mention of ridges we look more intently on the one to Meall Garbh and Beinn nan Eachan and discussed if we had time as it looks like a great place to play. After reluctantly moving on from the summit that we’d had to ourselves for almost an hour, we headed for Meall Garbh with probably an hour or two of extra walking for the day if we went to Beinn nan Eachan. As we got to the col between the Munro and its subsidiary there were several ponds covered in ice on the north side. The ice still had some depth to it as we skimmed a few stones over it, deciding against testing its weight bearing potential. Up on Meall Garbh the small amount of space barely gives room for photos as the drops either side are steep with rocky bottoms. The north side in particular is a fair sized boulder field which runs down to the impressive, if not as high, Beinn nan Eachan. Through the camera we noticed someone had skied down one of the faces with two neat parallel lines stretching from close to the summit to around 850m. That must have been a big lug up the hill as they seem only to have done it once. I bet it was worth it! 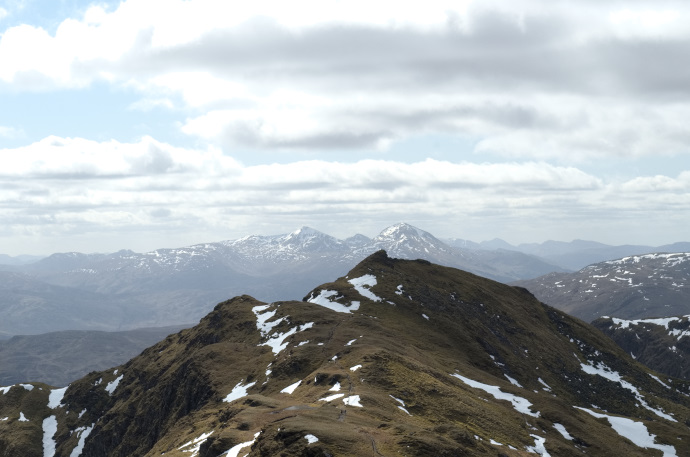 We now preferred to go and have some proper food and drink so began the descent on the south side heading for the off-road track rather than walk the whole ridge. More happiness was created as we, on purpose, slid on our backs down a 20m gully covered in snow a few metres from the top to a big drift at the bottom. Somebody else had had the same idea as a big trail was there already! We managed one final flirt with the white stuff at around 850m before a bit of a trudge across the thick grass and moss to the track. Long easy walks in the setting sun back to your car give you the chance to discuss and plan all manner of things. You’ll get long odds-on for guessing what we planned… our next trip! Where shall we go? How many Munros can we squeeze in? When will we get new passes printed and signed from the mothers of our children?! Sadly, we realised we might not be back for a year or more as (gladly) two of us will have new babies by that time so parental duty calls. What that means is we need to buy spa days and chocolate etc to placate and grease the wheels of the signing of the pass. I envy those of you that live within a drive of any of the Munros, you really are privileged. I might remortgage my house and buy a hoose nayar tha moontuns (house near the mountains).

That evening we got cleaned up and went for dinner at the Creggans Inn on Loch Fyne eating fish that had come out of the water a few hours earlier. We would all recommend that place for a treat. Try the scallops, they're fantastic. 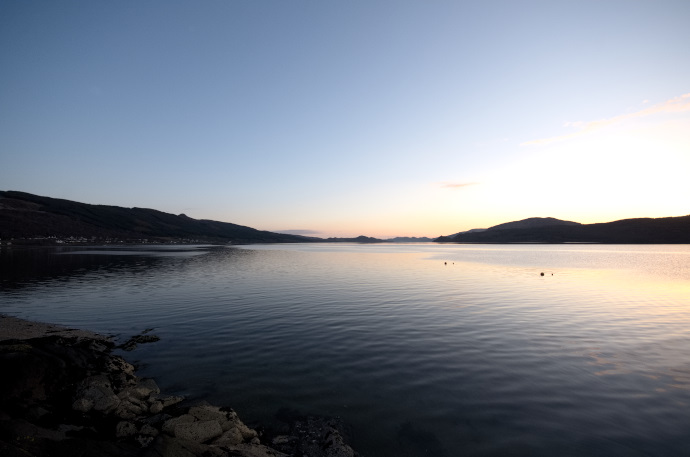 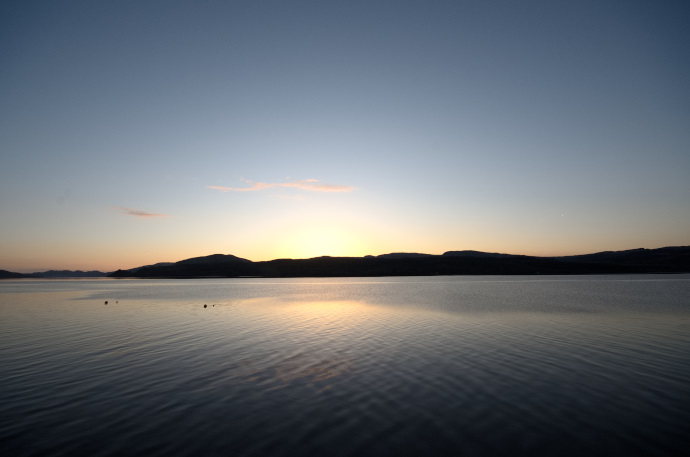 This walk and the food to finish was a perfect finale to our escape from reality. Life scarcely gets better.

On the day we flew back we had a little trip up from Tarbet to Glencoe to take photos of the most commonly photographed mountains in the country if not the world, had a pint in the Clachaig Inn and a mooch around the misty Bridge of Orchy. Bridge of Orchy is too often sped past as people head for Glencoe and Ben Nevis so I am looking forward to going there. I once drove through Glen Orchy from Loch Awe, that is another wonderful looking playground. In summary, as far as opening gambits to Munro-Bagging go I think we did well.