sgiath chuil and meall glas.gpx Open full screen  NB: Walkhighlands is not responsible for the accuracy of gpx files in users posts
we had caught the 6.30 train from Corrour to Tyndrum after a wonderful repast at the Station House. As we sat in the train across Rannoch Moor the rain was blattering on the windows, but fortunately by the time we had driven to Auchessan and sorted out our stuff the rain was off. It was dusk by the time we set off and we soon needed the head torches. We took a wee detour at the gate just past the farm because one highland cow was chatting to another over the gate. Although they are gentle souls they do have rather pointy horns so we skirted round the wall and found a gate in the corner of the field just before the gorge of Allt Riobain.
To be honest, it was a slog up the gorge in the dark by head torch. It's a really boggy wet path and it felt like a very long way, probably because it was! We had intended to come out of the forestry onto the relatively flat area beyond, and camp away from the path a bit, but in the end camped on the first bit of flat ground we could find where the water in the burn could be reached without abseiling down the gorge! As it turned out we were only about 100 metres short of the original plan. It was starting to rain as we stopped and by the time the tent was up it was a full blown downpour and sounded as if someone up there was pouring bucketfuls of water onto us!
The rain passed off at some time in the night and we woke to frost and ice on the tent and a view of a sunlit snow covered Sgiath Chuil peeping out round the side of the hill ahead of us. That certainly lifted the spirits somewhat but we were in no huge hurry and by the time we had breakfasted and stashed the camping gear it was ten o'clock. looking towards Ben More from our camp

We were soon out of the forestry and following the interestingly named path up the west bank of Allt Riobain as far as the dam, as described in the WH route. Crossing the river just upstream of the dam, we set off straight up the hill with bog giving way to slush and then to proper snow as we got higher. 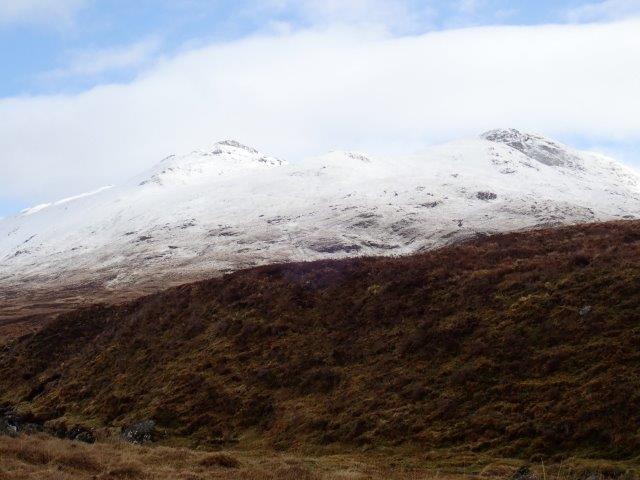 It was a gorgeous day with flurries of snow, patches of sun, bits of weather visible moving in and out all around, but it looked to us like our hills were having the best of it. snowing a bit, looking across to Meall Glas 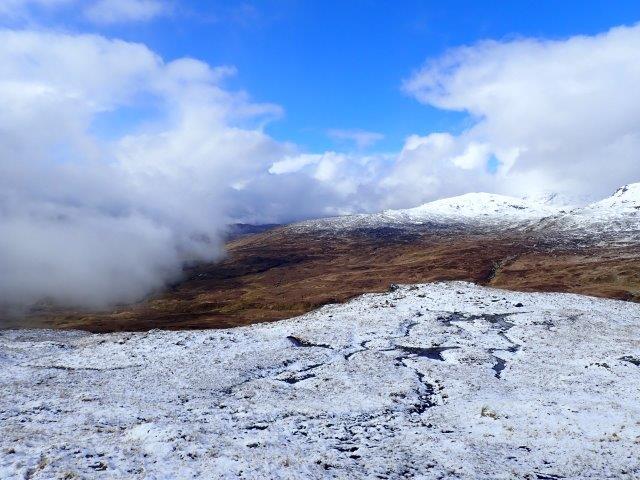 bit of weather blowing in

As always photography is required to ensure adequate rest stops, and there was no shortage of opportunities to take gorgeous pictures. A lot of rain had fallen on our tent overnight but of course on the tops this had landed as snow so it was definitely a return to full winter conditions. 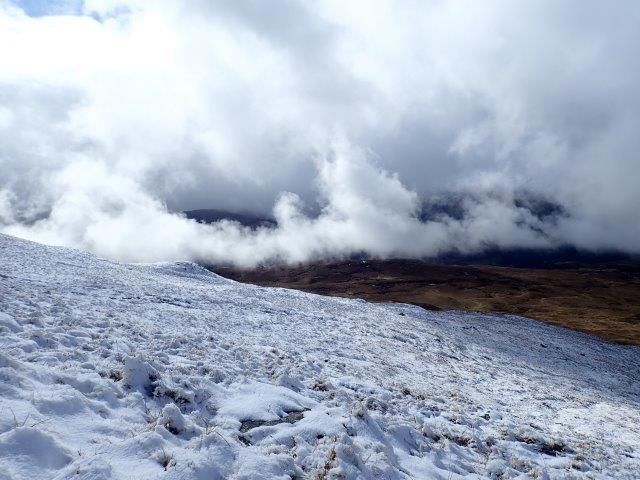 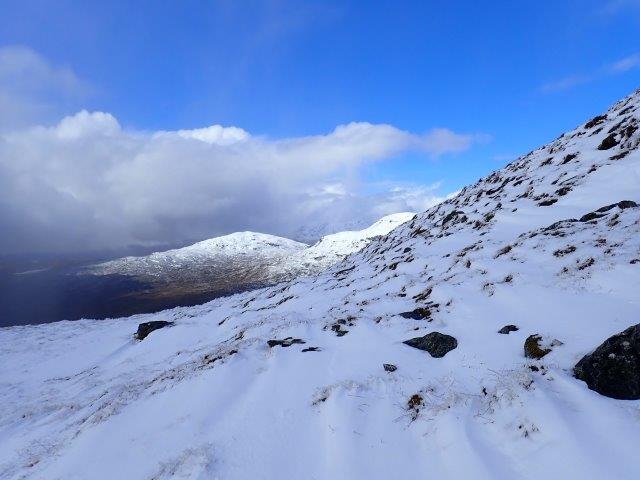 is there a storm coming?

It was sunny on the top of Sgiath Chuil when we arrived and we found a very sheltered spot just to the west of the cairn where we could sit and have a leisurely lunch and a rest from our efforts. 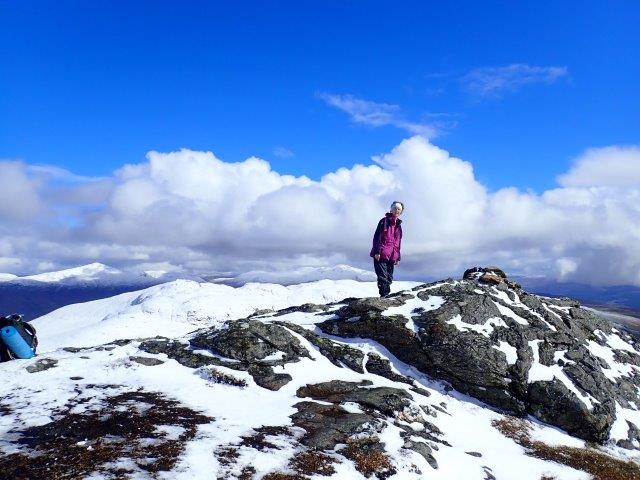 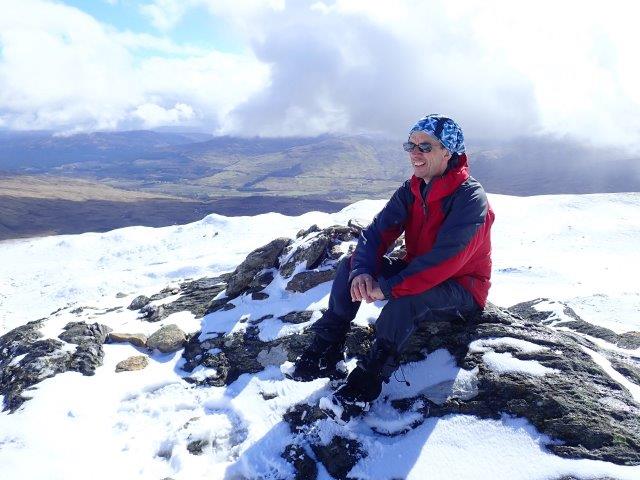 and Rudolph with the view into Glen Dochart 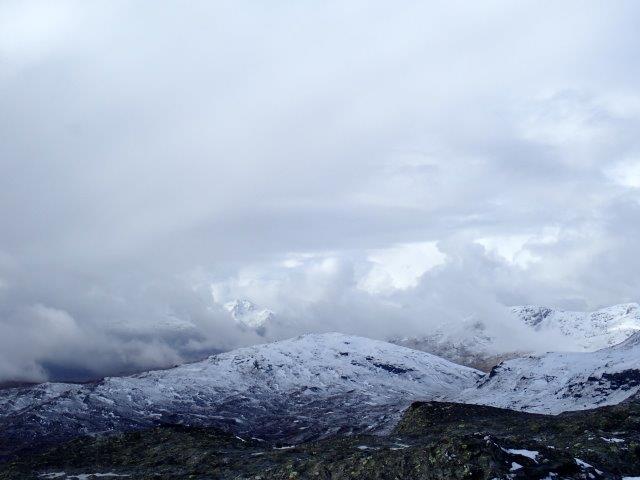 As we left the summit to continue to Meall Glas a young man arrived who caught us up and passed us not long after the start of the second ascent, which was very handy as he blazed a nice trail for us up Meall Glas saving us quite a bit of effort in the deeper bits of snow! We were singing Good King Wenceslas as we went. It is quite a low bealach at about 600 metres between the too hills and a steep descent off Sgiath Chuil but this was quite fun in the snow and quite probably easier than if we had been descending tussocky bog without it. From snow to slush and then bog, then back to slush and proper snow as we ascended. There was a nice cornice on the northern ridge of Beinn Cheathaich but it was easy enough to find a line which came onto the ridge below the cornice and we then skirted to the west of the top of Beinn Cheathaich to save ourselves a few metres of climb. 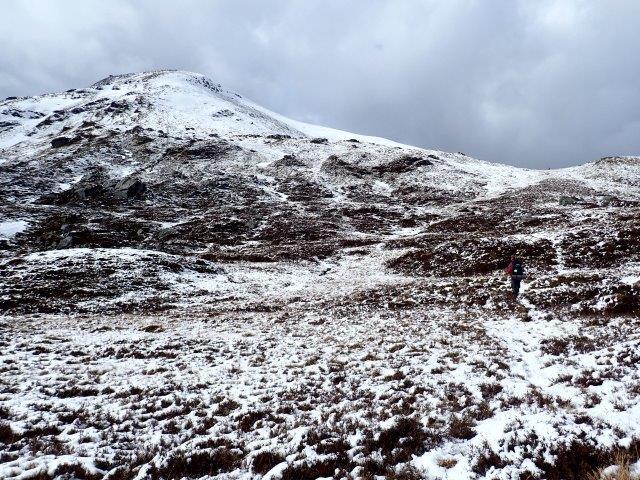 cornice to the right of the summit.

That was a lovely ridge walk to the summit of Meall Glas where it was quite chilly so we didn't hang about for long. Rudolph on Meall Glas with Beinn Challuim and Creag Mhor behind and me, with Ben More on the left of my head and Cruach Ardrain on the right looking NOrth from the summit

Setting off confidently in a straight line opposite to where we had come up we soon realised we didn't quite want to go that way which involved going straight down off a cliff. But there was a great view across to Beinn Challuim and Beinn nan Imirean. where we came from We picked our way down to Meall Glas Beag and then right a bit to reach the head of Allt Glas, which we followed all the way downstream to meet Allt Riobain, quite a long way it felt to us, but easy to follow all the way with a path! From there we followed our uphill route back to the tent where we stopped for a long rest and a brew.
By the time we had repacked our bags with the camping stuff and returned to the car it was 8pm and we were pleased to find a chip shop open in Callander (they seem to serve every kind of fast food you could want, but no hot drinks - never mind, it was very welcome!) primroses in the woods by Allt Riobain

This walk took us far longer than it ought to have done and I realised I am going to have to put in some serious work at getting fitter! anyway it was a good start to the year and the opportunity to gain another two blue balloons that have been eluding us for some time. But we had a brilliant day with an uncertain weather forecast; we heard that there were gales and blizzards the following day.

You were there the same day as me!

What a great day.

Ah, so was it you who passed us?

One day,one day,but as we are now both nearing the finish line it may need to be soon.

gammy leg walker wrote:One day,one day,but as we are now both nearing the finish line it may need to be soon.

There's still a few left we both haven't done so still hoping!

gammy leg walker wrote:One day,one day,but as we are now both nearing the finish line it may need to be soon.

There's still a few left we both haven't done so still hoping!


Maybe a few PMs at some point 😂

Nice to see this lot with a white dressing. I have great memories of walking them in summer 2016...

Alteknacker wrote:Nice to see this lot with a white dressing. I have great memories of walking them in summer 2016...

sounds grand. I think snow makes the hills more beautiful, and it is lovely to look round at all the hills we have already been up!